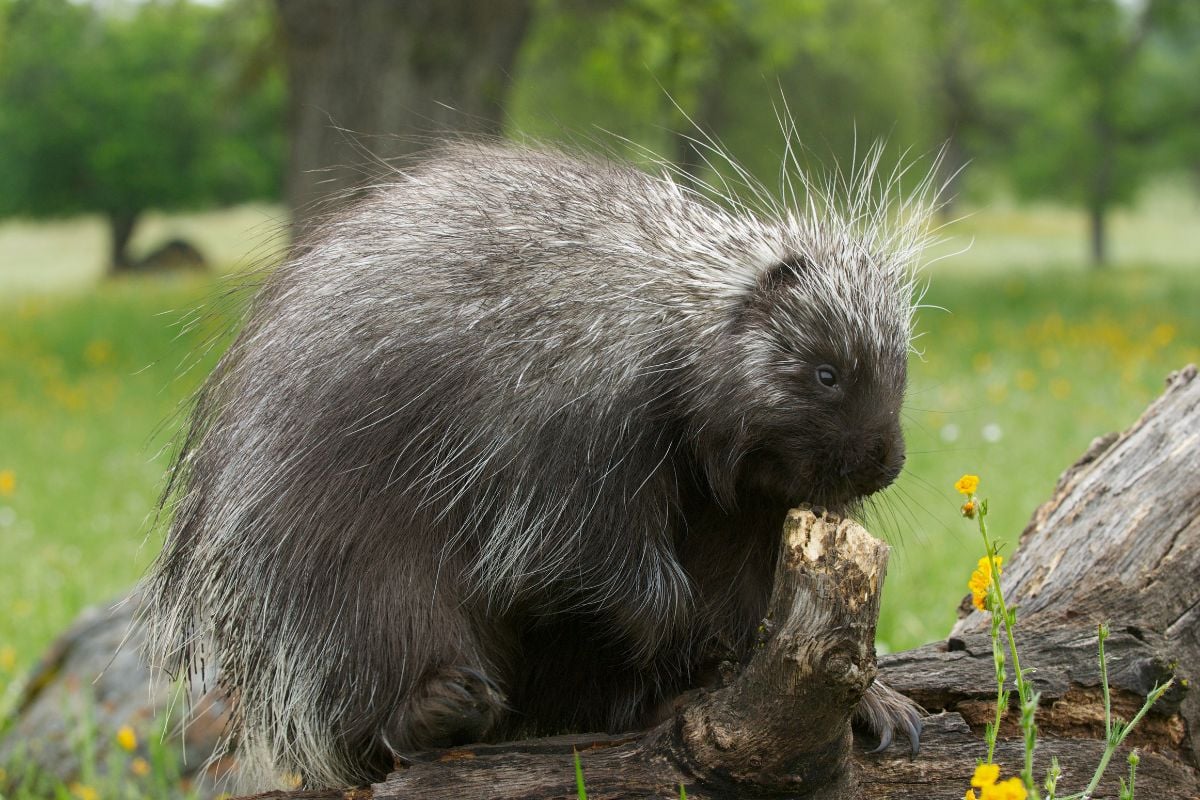 Porcupines (Erethizon dorsatum Linnaeus), also known as the North American, Canadian, or common porcupine, do not hibernate. During the winter, they wander away from their den and feed on tree bark. Porcupines climb trees by grasping the bark with their hind legs and propping themselves on branches with their tails.

When they finish eating, they back themselves down the tree. The strange thing is that they often fall and break bones. But, unlike you and me, porcupine bone fractures heal quickly.

Did you know that a porcupine has up to 30,000 sharp quills covering its body and tail? I used to think porcupines throw their quills, but they actually release them if an animal touches the quills. Find out more about porcupines, their habits, and their habitat.

Do Porcupines Hibernate in the Winter? 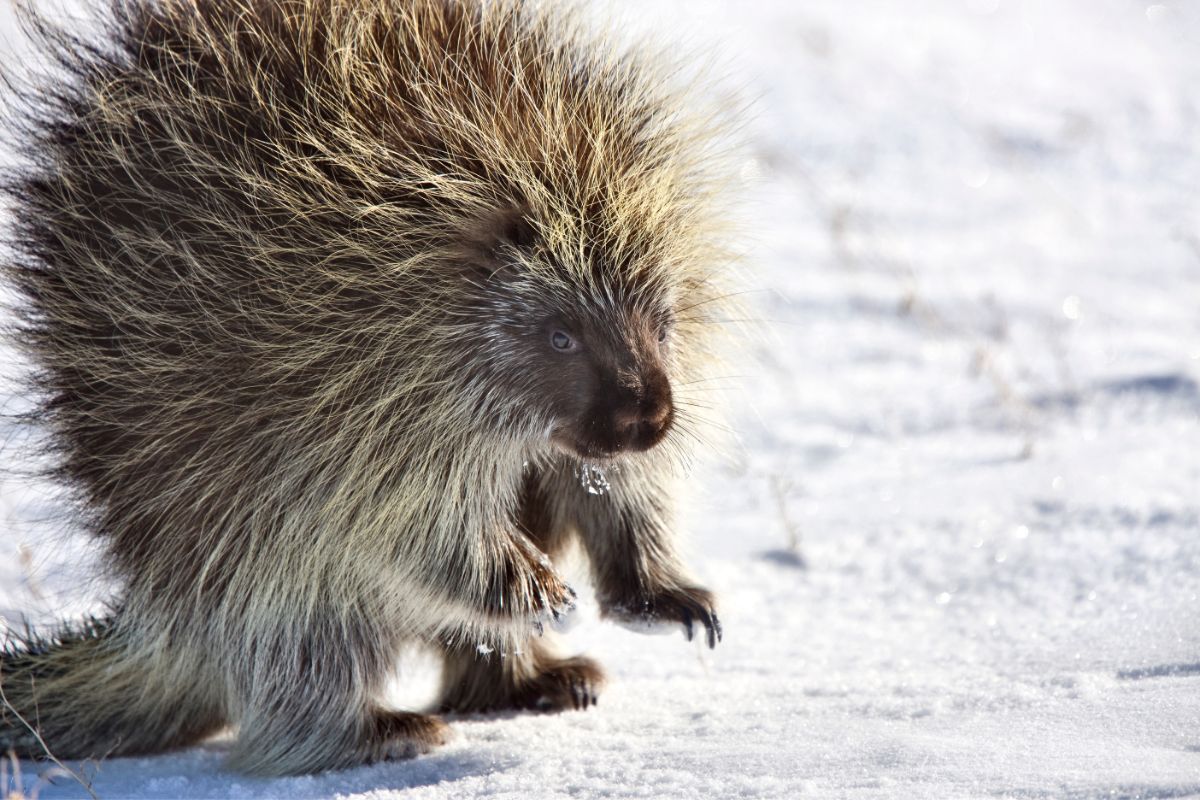 Porcupines don’t hibernate. They forage for food in the winter, eating the bark from trees. Their quills help insulate them from the cold. They also gather plants that live near water, but they don’t like to swim.

You can tell if a porcupine has been around because you’ll see bark, sticks, and scat under trees and in the snow where porcupines forage. You won’t catch sight of them during the day since they’re active at night. 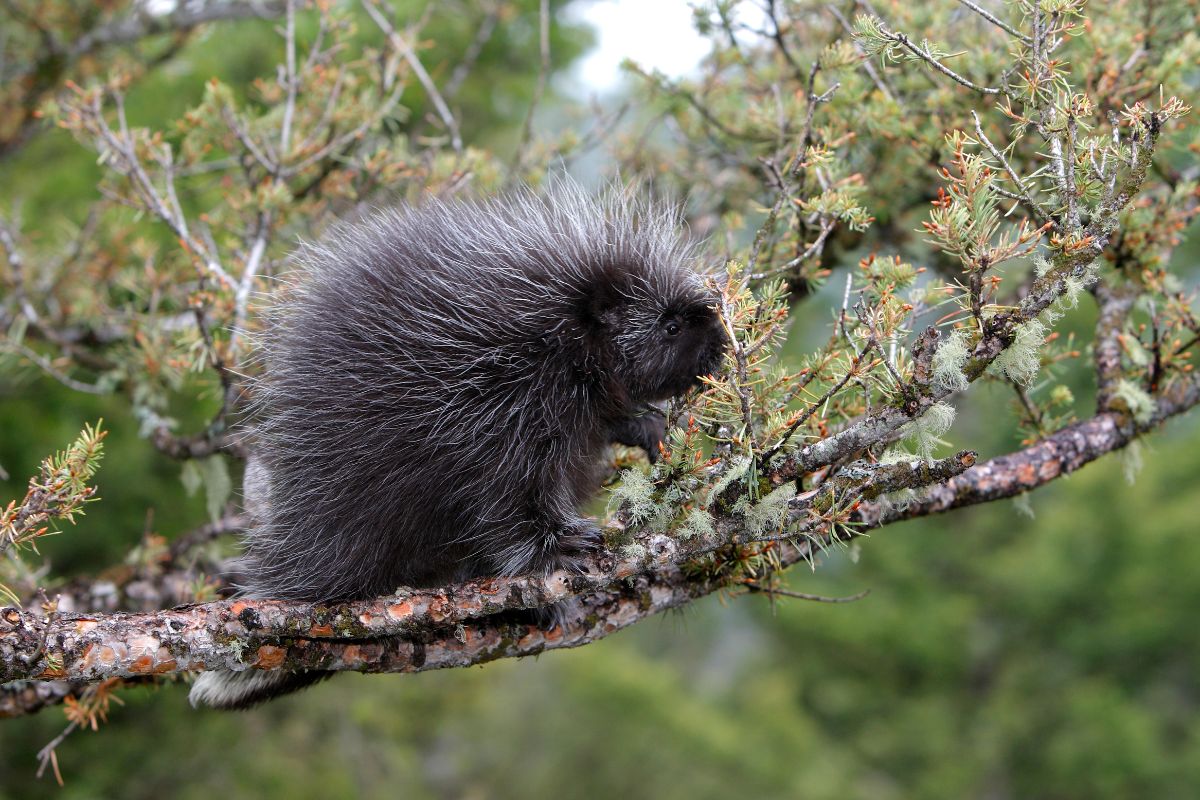 Porcupines are unique, slow-moving rodents. Here are some of their unusual features:

How Do Porcupines Protect Themselves from Predators?

Many young porcupines fall prey to predators. These predators include foxes, fisher cats, black bears, coyotes, bobcats, weasels, and great horned owls, among others. Porcupines aren’t aggressive but they protect themselves by releasing their needle-sharp quills if a predator touches them.

As the animal’s muscles move, they drive the quills deeper into the skin. Quills can be fatal if they puncture blood vessels or major organs. In addition to quills for protection, porcupines also release a strong, stinky odor as a warning.

They also make loud verbal warnings by banging their teeth together.

Do Porcupines Get Stabbed by Their Own Quills When They Fall from a Tree?

Yes, porcupines do get stabbed by their own quills. For this reason, they have built-in antibiotics in their quills. This fights infections from self-inflicted wounds from quills.

Porcupines make the antibiotics in their spines, and the anti-bacterial chemicals travel onto the quills. The antibiotic forms a thick greasy substance on the quills.

How Big Are Porcupines?

Porcupines are the second largest rodents in North America. Beavers are the first. They grow up to 20 pounds (9 kilograms) and are 2 to 3 feet (60 to 90 cm) long.

Where Do Porcupines Live?

North American porcupines live in Alaska, Canada, northern Mexico, and the northern United States. If you ever visit the Adirondacks, you’ll see evidence of porcupines at high elevations. They build their dens in many places.

You can find them living in the following places:

If you see animal droppings around any of these places, most likely a porcupine lives there.

What Is the Habitat of Porcupines?

Since porcupines are dispersed throughout North America, they live in various climates and habitats. Depending on their location, porcupines live in forests, deserts, and open grassy areas. 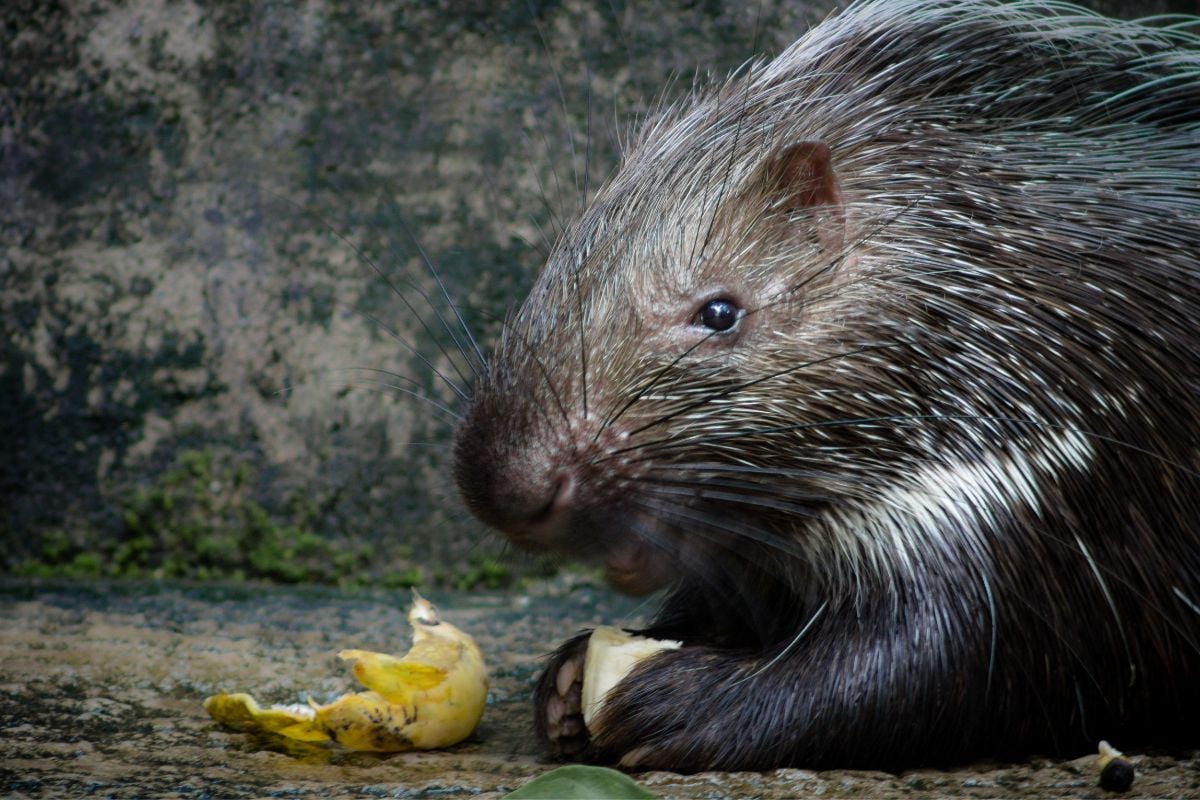 The winter diet of the porcupine consists of tree bark. Porcupines are herbivores and eat from about 10 tree species for winter food. But, they usually select one or two as their favorite foods.

These include Hemlock, phloem, white pine, red spruce, birch, sugar maple, and beech trees. Porcupines use their 12-inch incisors to pulverize the bark. They also have strong jaws and a digestive system that takes up three-quarters of their body cavity.

How often Do Porcupines Mate? 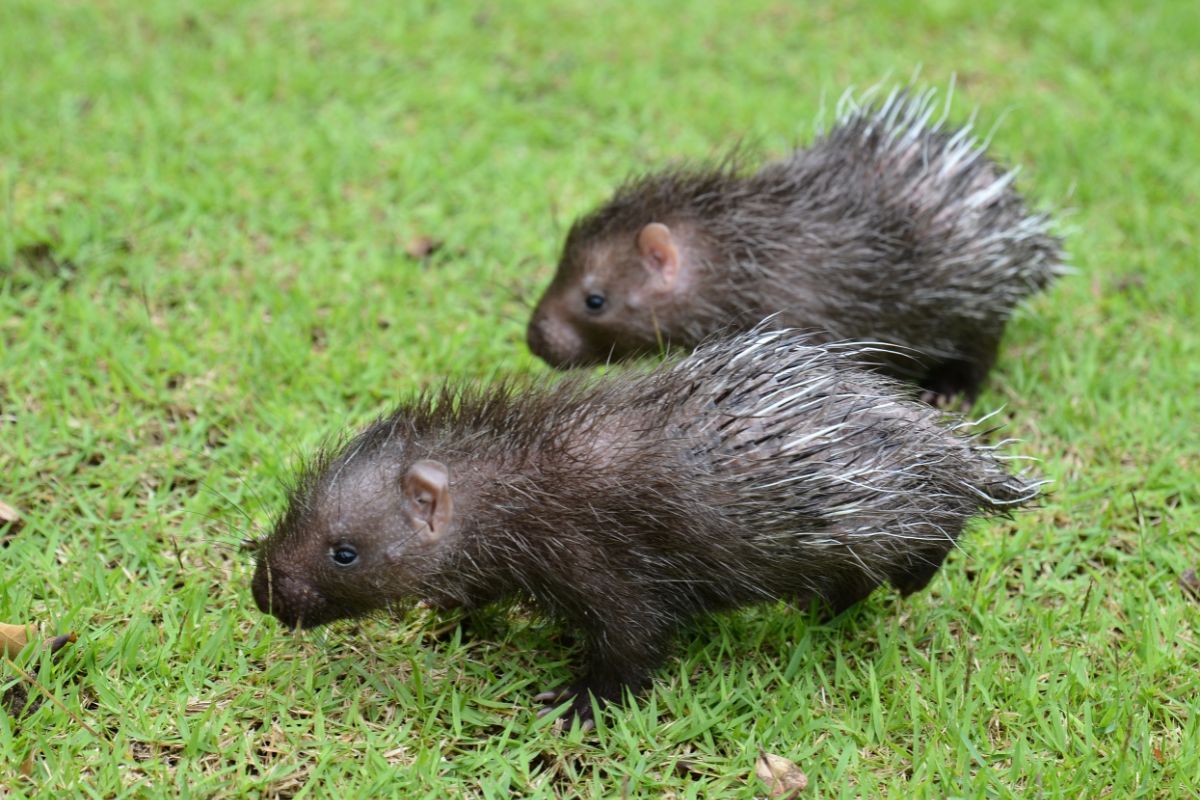 Porcupines mate once per year in November and December. The female porcupine carries her fetus for about seven months. Most of the time, porcupines only have one baby.

The mother porcupine lines the den with roots and branches to prepare for the birth of her porcupette. The baby weighs about one pound when it’s born. It has fuzzy red fur, as well as strong teeth.

The porcupette’s eyes are also open at birth. The baby starts eating vegetation at two weeks but continues feeding from its mother until three months old. Porcupines start mating at 15 to 18 months old and live from 10 to 18 years.

Do Porcupines Live in Packs?

For the most part, porcupines live alone. But, during the winter, as many as a dozen porcupines will live together. This communal living also happens when males are courting females during the mating season. Several males stay in the den with the female porcupine.

This situation always ends up with the wounded males because they fight over the female. When a male and female porcupine bond, they might live together for a short time, but sometimes they just move on from each other.

How Do Porcupines Communicate?

Porcupines don’t see very well, but they sure can make a lot of sounds. They communicate with each other by chattering their teeth, grunting, screeching, snarling, and making high-pitched shrieks. Porcupines have a strong sense of smell, so they also communicate by marking with urine.

This happens frequently during the mating season. The male porcupine sprays urine on the female before mating begins.

Do Porcupines Cause Problems for Humans?

Two things about porcupines are annoying to humans. One is that they crave salt. This often causes porcupines to seek salt near people. They chew houses and plywood and lick cars that have road salt residue.

Another negative impact porcupines cause is feeding on trees. This causes many trees to have stunted growth, crooked tops, or even die from bark stripping. Because of this, some trees can’t be used as lumber.

Another problem is the danger to pets. If your dog or cat comes into contact with a porcupine, the quills can cause serious injury or death. 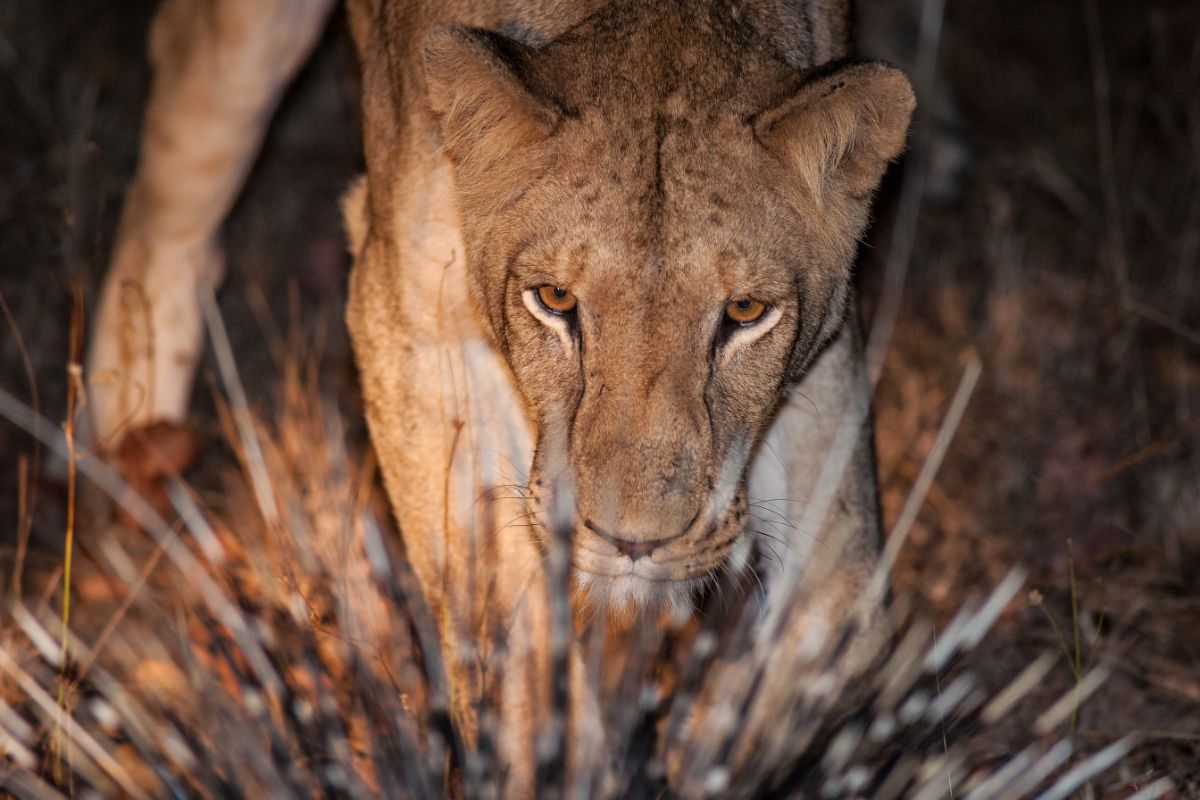 Porcupines are not on the endangered animal list. They’re listed on the IUCN Red List of Threatened Species as ‘Least Concern.’ This means that the North American porcupine population is stable and not endangered.

However, they are hunted or trapped. Several porcupine habitats are protected areas in Canada, the U.S., and Mexico. This lets porcupines increase their populations.