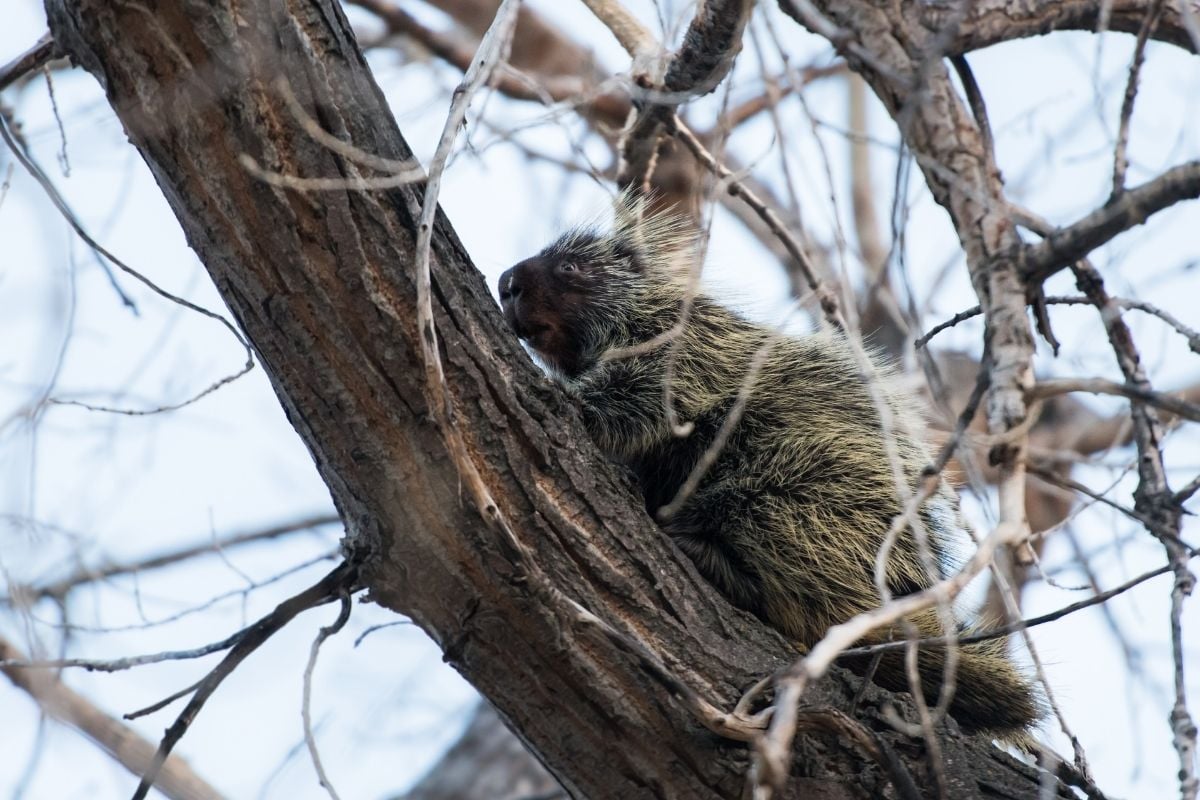 Depending on where you stand, there’s something about nature that’s cute, stubborn, destructive, or dangerous. When it comes to porcupines, they embody nature. Their adorable faces and non-aggressive demeanor are welcoming, but the 30,000 quills on a porcupine’s back say, “not too close.”

Quills are the thorn-like structures on a porcupine’s body. Sometimes, they’re referred to as spines. With a porcupine, it’s a matter of ‘just look and don’t touch.’

Trust me, I learned this the hard way once I developed an interest in these animals! On the positive side, I also discovered that, contrary to popular belief, porcupines don’t shoot their quills. What happens is they get stuck and dislodge once they come into contact with human or animal flesh.

This is made possible by microscopic fish-hook-like barbs at the tip of each quill. But there is much more to this cute, ‘look but don’t touch,’ mammal. Let’s explore.

Porcupines are the world’s third-largest rodent after the capybara and the beaver. The quill-covered animals use their quills to defend against predators like lions, leopards, and humans. Biologically, porcupines are in the order Rodentia, but they subdivide into the Hystricidae and Erethizontidae families.

At times they come out during the day. They can also inhabit the trees and are generally smaller in size.

There are many types of porcupines, many  being considered new world and the others  old world porcupines. Some of the new world porcupines are from a declassification of defunct taxonomic groups. Follow along as we explore all the types including their histories, habitats, diets, size, and much more..

Old World porcupines are terrestrial rodents. They are larger and are strictly nocturnal. They primarily live in Africa, Europe, and Asia. 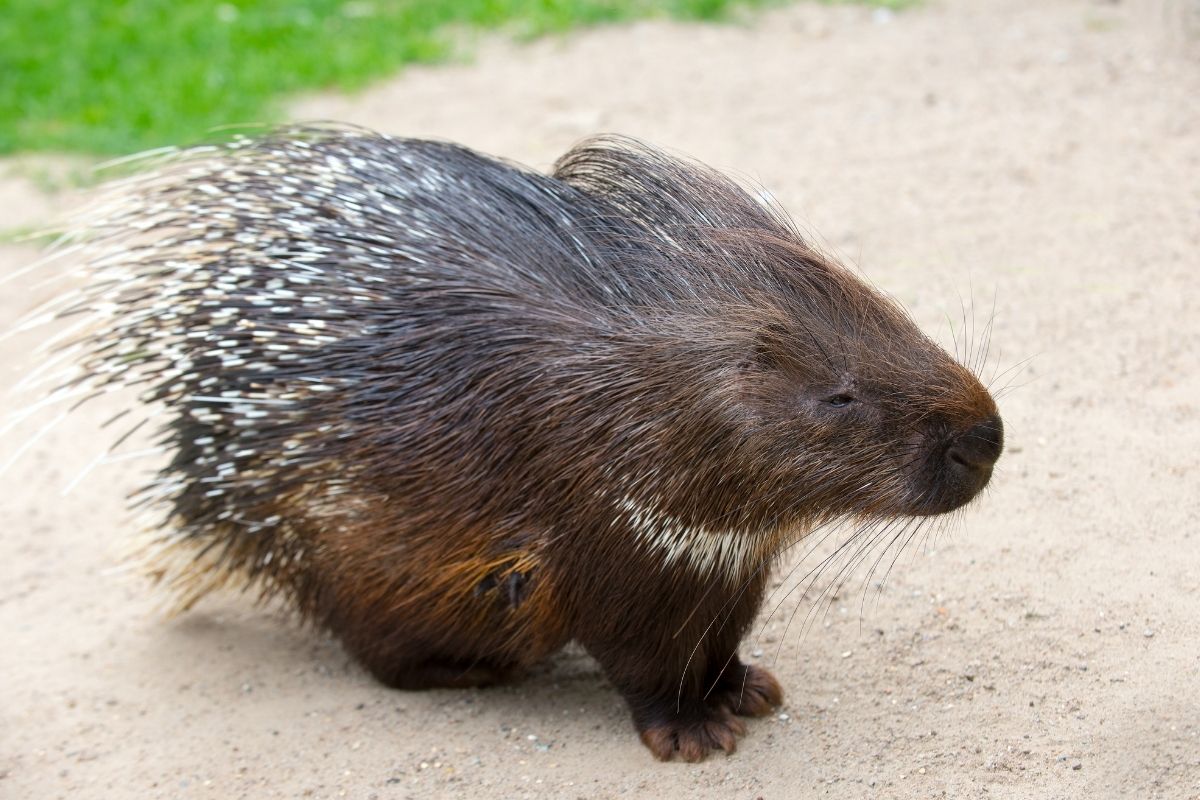 The African brush-tailed porcupine is a small rat-like porcupine. This type is usually found in Africa, in the area spanning Guinea to Kenya. Humans hunt it for meat.

According to the classification by the International Union for Conservation of Nature, it is of least concern despite the threat of hunting. 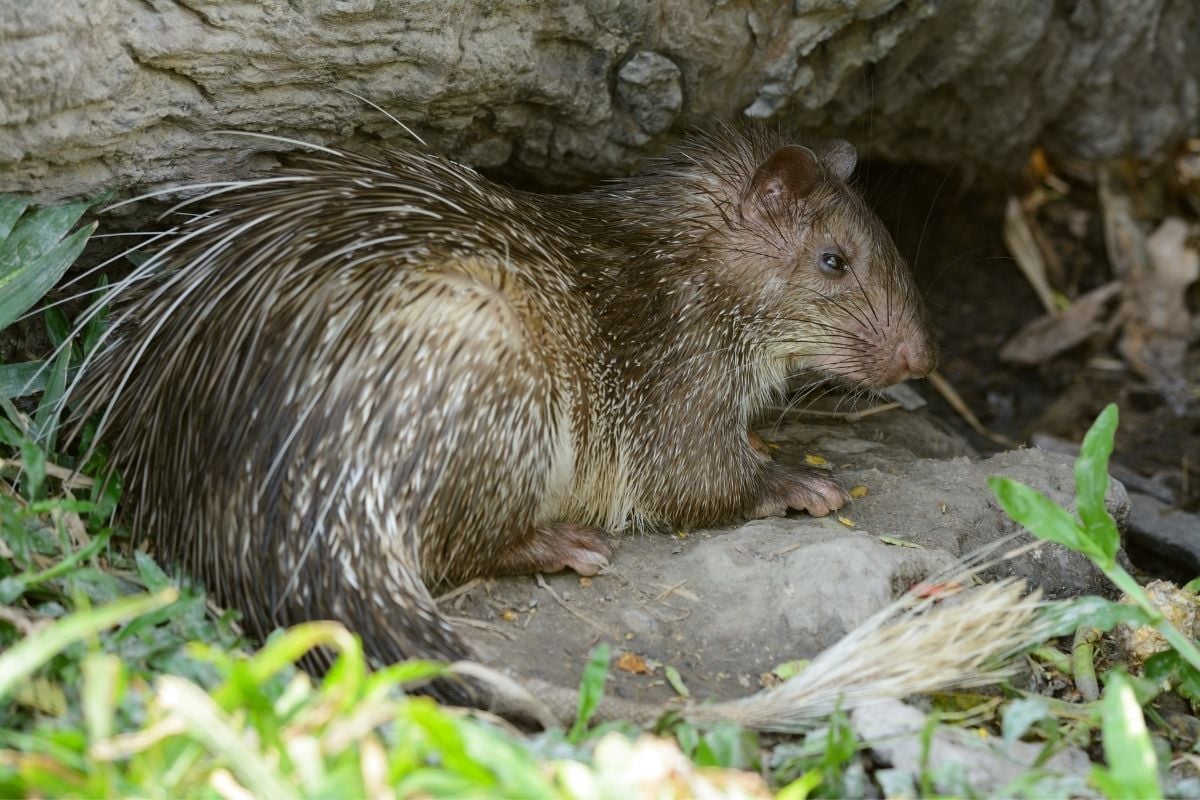 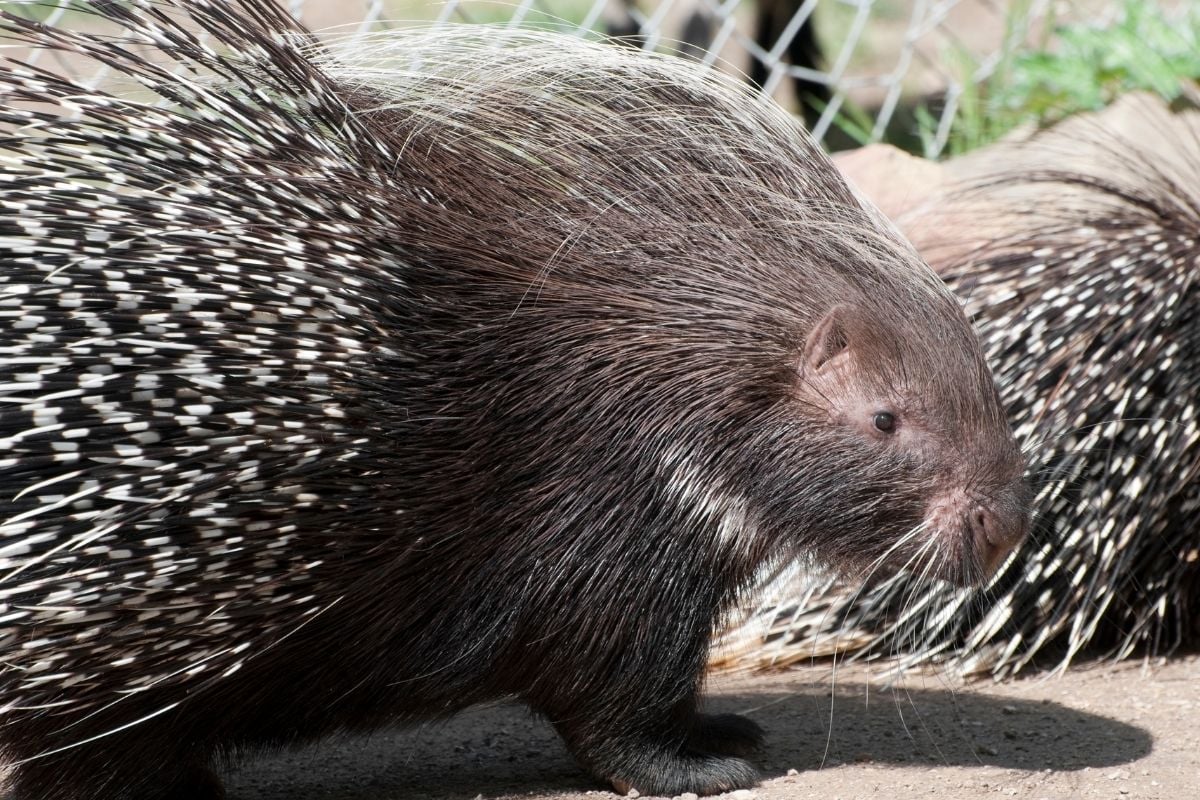 If the danger persists, they stamp their feet, whirr their quills and charge toward their attacker and try to stab them with the quills. Their attack can be fatal. It has killed lions, leopards, hyenas, and humans. Surprisingly, the crested porcupines might appear clumsy on land, but they are agile swimmers.

Even being good at swimming, they do not migrate with the seasons. 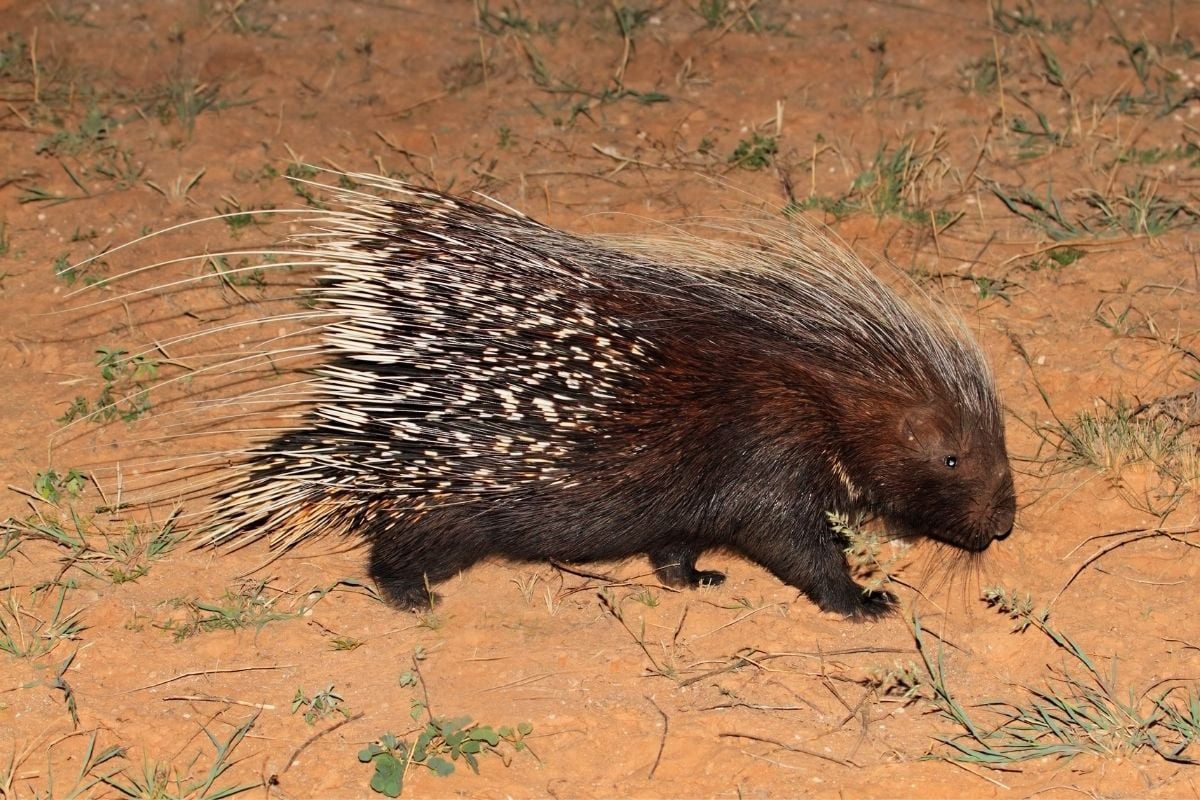 Sometime, it can be confused with the crested porcupines, but the Cape has a white streak of quills around the neck.

See also  What Animal Do Not Come Out at Night? 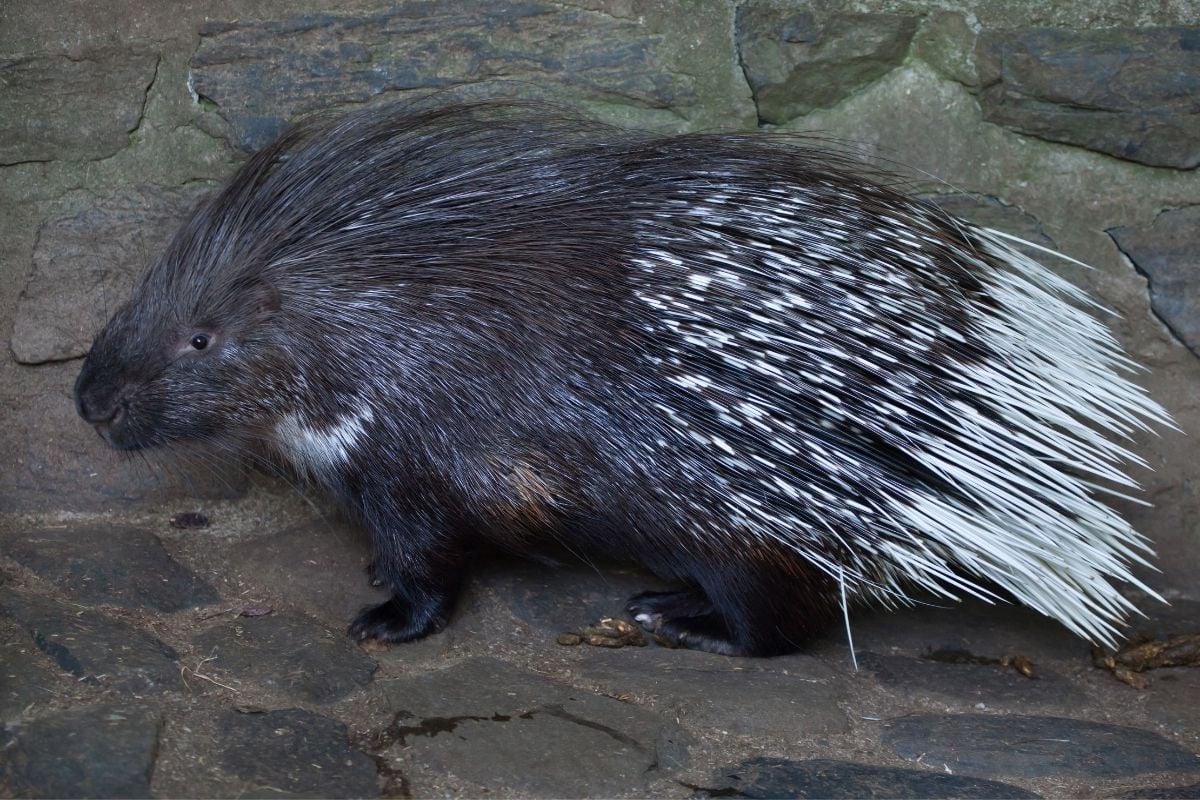 The quills at the tail are white with longer hollow quills that rattle as a warning to the threat. Furthermore, the porcupine has broad feet with claws for burrowing. Their small surface area to volume ratio also comes in handy in cold seasons. 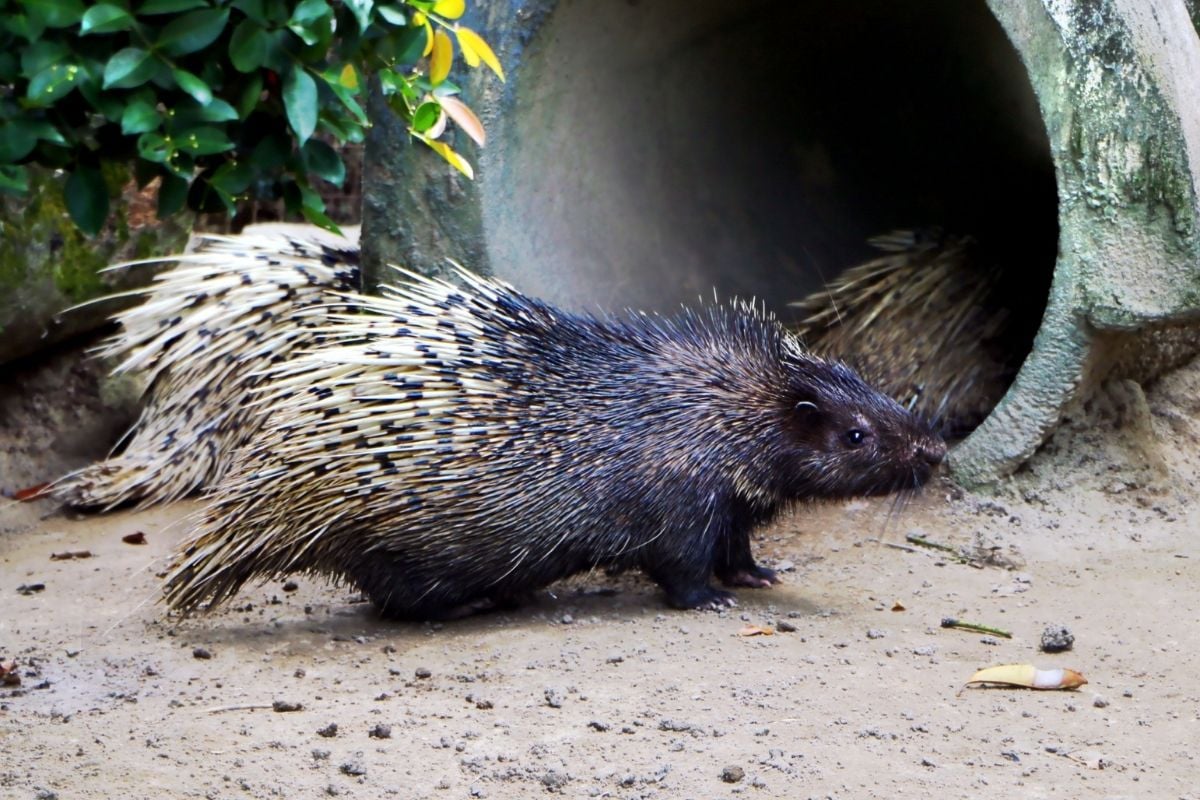 Also known as the Himalayan porcupine, this mammal is a large rodent with a stout body covered with sharp quills with a rigid structure. The quills on the upper body are rough and characterized by black, white, and yellow stripes.

In addition, the Malayan porcupine has short, stocky legs, with the front legs having four claws and the hind legs having five clays. The soles of the porcupine are smooth.

The Sunda porcupine, scientifically referred to as Hystrix javanica, is a rodent species belonging to the Hystricidae family. It is only found in Indonesia. According to the Indonesian government, Sunda porcupines are a protected species.

Despite this protection, these porcupines still face danger because they’re hunted and consumed as an aphrodisiac.

The Sumatran porcupine is an endemic species in Indonesia. They’re dark brown in color, but half of their quills and bristles are white-tipped, giving them a speckled, grey appearance. Sumatran porcupines have sharp flattened quills, stiff bristles, and rattle quills as body cover with more flexible quills and bristles on their cheeks, belly, and feet.

The quills and bristles can grow up to 16 cm long. Rattle quills are found on the tail and have hollow tips that produce a hissing rattle sound when they shake. However, these quills do not develop until the animal reaches maturity.

The porcupine resembles the large-small toothed beavers with long toes and pale quills. The porcupine’s fur is brown or grey and has a pale underbelly, neck, and inside of the legs.

What you need to know about the Thick-spines porcupine: 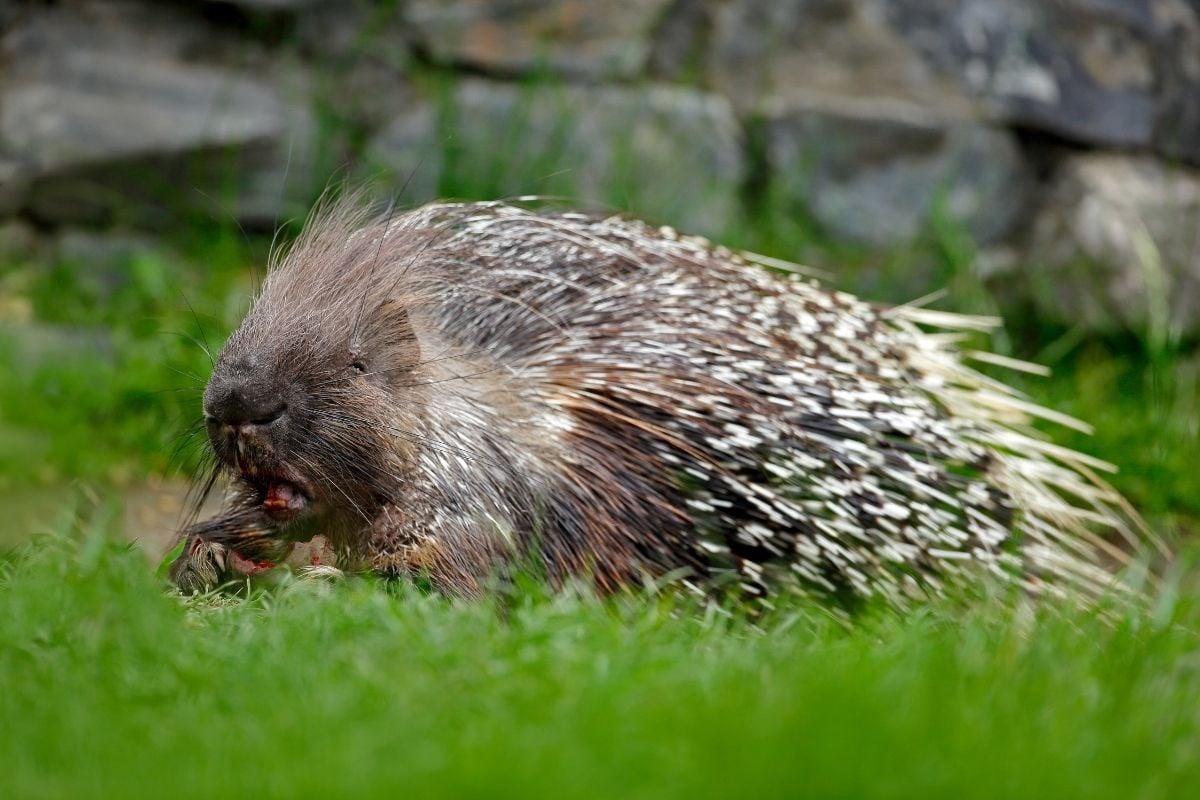 Locally known as durian or landak, the Philippine porcupine species is found in primary and secondary forests in the mountains and lowlands. Its population appears to be stable as it is reported to be persecuted by farmers as a pest in coconut plantations. This species can also be found in caves, but it is more commonly found under tree buttresses or in rock crevices.

It is endemic and only found in the Palawan Faunal Region. It has also been seen in areas such as the islands of Busuanga, Coron, and the Puerto Princesa Subterranean River National Park. This mammal does not appear to have any natural enemies.

It is considered a pest by the coconut farmers who hunt it.

Their coat either has cylindrical or flattened quills mixed with long hairs. Their heads are rounded and fleshy. Unlike the old world porcupines, they are not exclusively nocturnal or terrestrial. They can feed during the day, and some species live entirely on trees.

Mostly, they diet on barks and leaves but can also eat roots, fruits, nuts, leaves, grass, flowers or even stems. In addition, some species feed on insects and small vertebrates.

Examples of the new world porcupines include: 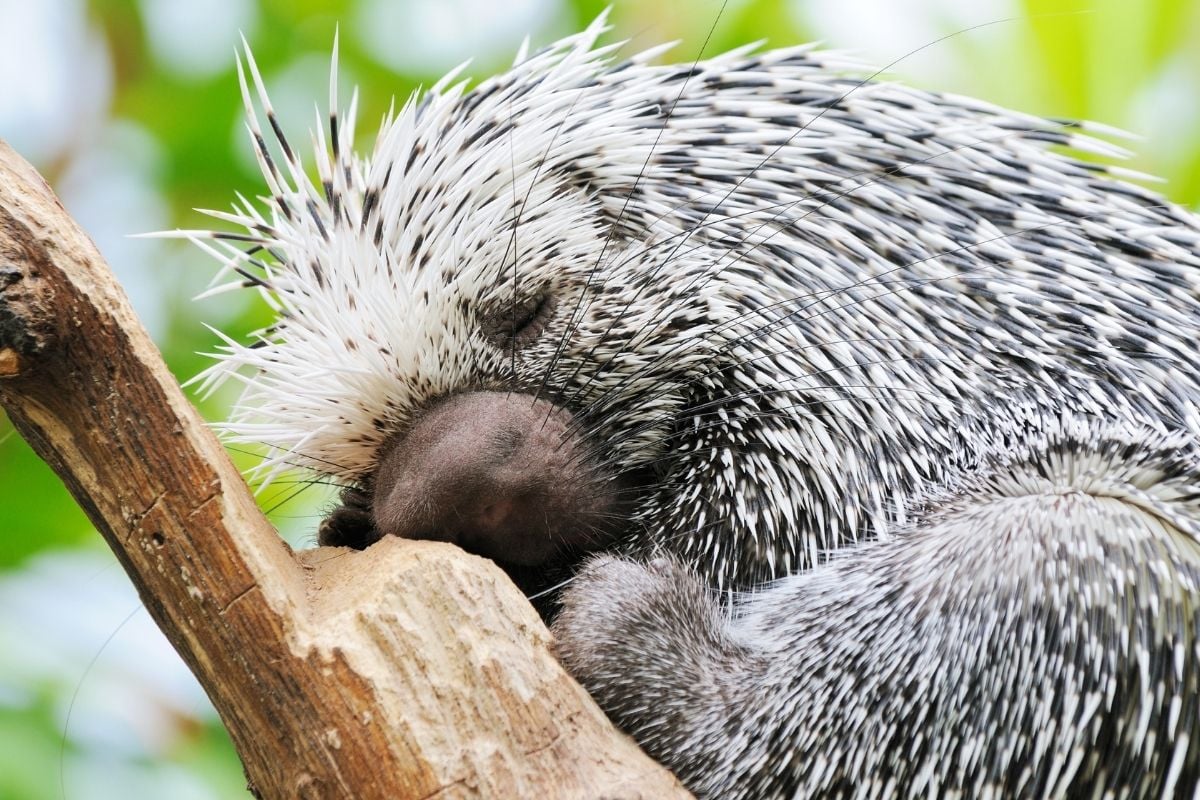 The Brazilian porcupine is covered with short thick quills which can be whitish or yellowish. The quills mix with darker hair, but the hair on the underside is greyish. These porcupines have a fleshy nose and a long tail that curls at the tip to aid grip while climbing trees.

What you should know about the Brazilian porcupine:

The quills of the bicolored-spined porcupine are pale yellow at the base and a black tip. The spines are dense on the back of the porcupine but none on the tail. The tail is for grip while climbing trees.

What you should know about the Indian porcupine:

The Andean porcupine is a rare type of porcupine, and its population is decreasing due to habitat fragmentation, deforestation, and agriculture. This porcupine has a large, pink nose with small eyes. Its body is covered in spiky dark quills with a yellowish tip.

It also has a tail that starts broad but slims towards the end to aid in holding onto branches while climbing trees.

The Black dwarf porcupine is also known as Koopman’s porcupine. The porcupine is endemic in northern Brazil, specifically in the Amazon rainforest. Primarily it inhabits the primary forest but can also inhabit second growth.

The Santa Marta porcupine is mostly found in dry forests at altitudes below 1100 meters. These porcupines are small in size and have a black and white appearance due to their quills which are black at the base and white towards the tip. This type is found in dry forests on the lower slopes of Colombia’s Sierra Nevada de Santa Marta, as well as the Serrana del Perijá mountains and the surrounding areas.

Some scientists refer to it as a subspecies of the Brazilian porcupine.

This porcupine is mostly found in South America and has a short, prehensile tail. Its quills are gray-brown, with the brown emerging from the colorful quills that run along its spine.

They also have parental care, where the females provide the care. 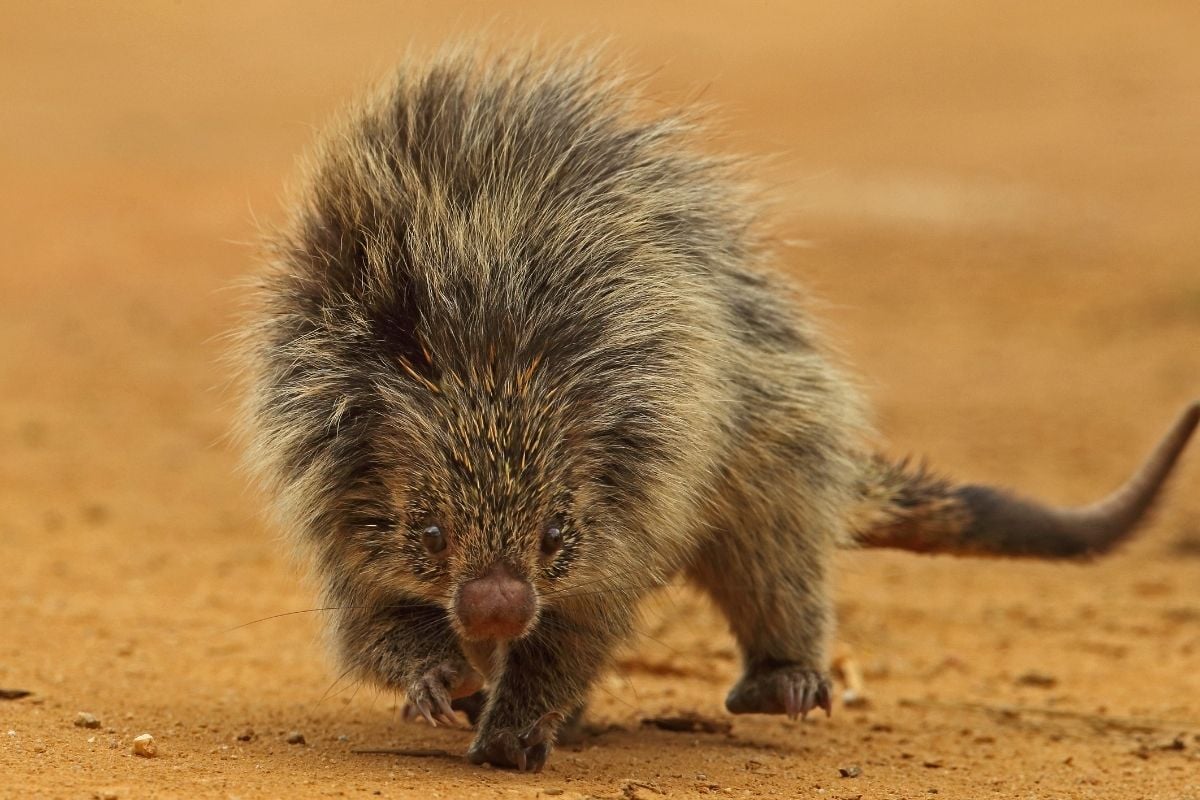 The brown hairy dwarf porcupine is a small to medium-sized porcupine with a prehensile tail that aids its mobility on trees. It is covered with long brown hair and hardened yellowish quills.

The tricolored quills give it the streaked appearance.

See also  What Animal Do Not Come Out at Night?

The Roosmalen’s dwarf porcupine is covered with brownish or grayish fur and has bicolored quills and tricolored bristle quills. The name comes from the people who discovered it – Marc van Roosmalen and his son Tomas. The first specimen of this porcupine species was collected from the middle Madeira River.

The frosted hairy dwarf porcupine is from Colombia and Venezuela’s northern and eastern parts. The porcupine lives in the lowland at elevations of above 160 ft. but below 8530 ft. Genealogical investigations have shown that unlike the previous genus assignment, this porcupine  is polyphyletic, meaning it has more than one ancestry.

It was previously referred to Sphiggurus, which is no longer recognized as a genus distinct from Coendou.

The stump-tailed porcupine gets its name from its shorter tail than the other typical porcupines in a similar classification. It is still prehensile despite a short tail because it uses its tail to climb trees. However, the tail has evolved instead of wrapping around the tree.

Instead, it only hangs on the branch like a coat hanger. 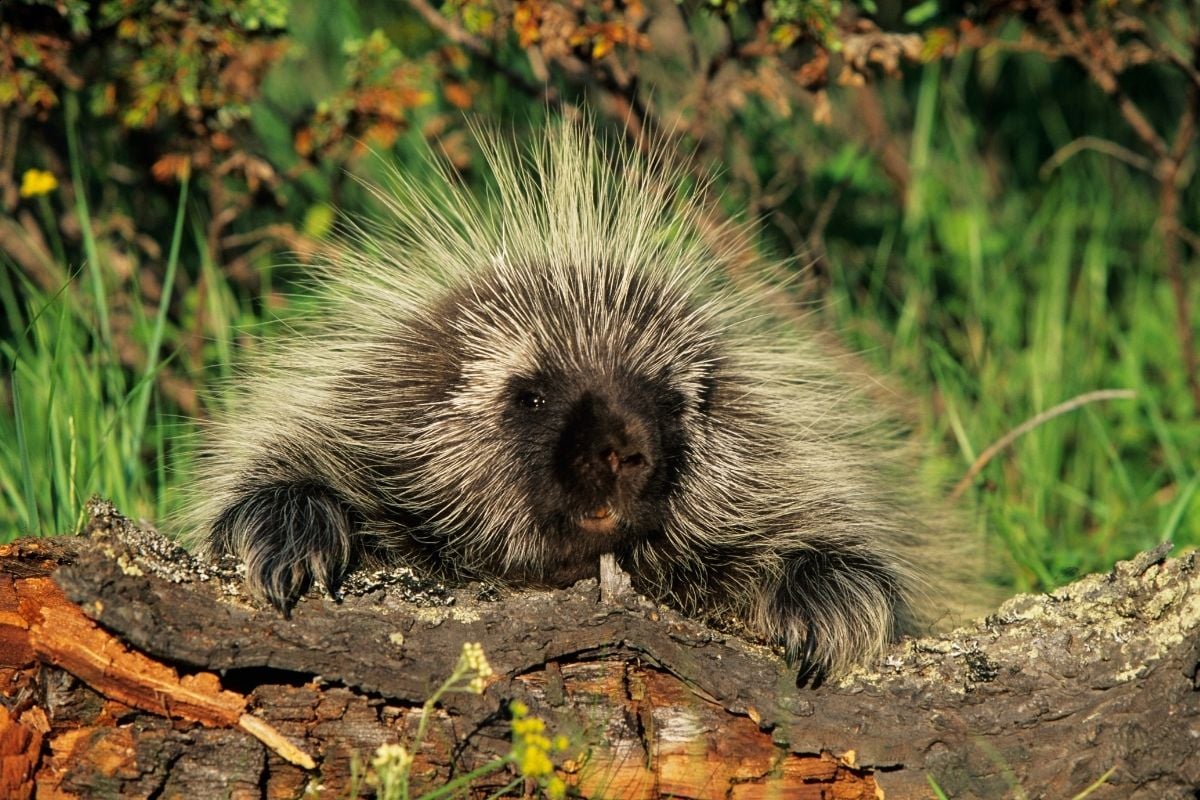 This porcupine is also known as the Canadian porcupine. The northern American porcupine is fully covered in quills, and an adult can have up to 30,000 quills covering them all over except the underbelly, the feet, and the face. They also have a natural antibiotic to heal it if it falls from a tree and injures itself with its quills.

This type is usually black or dark brown but has white highlights. 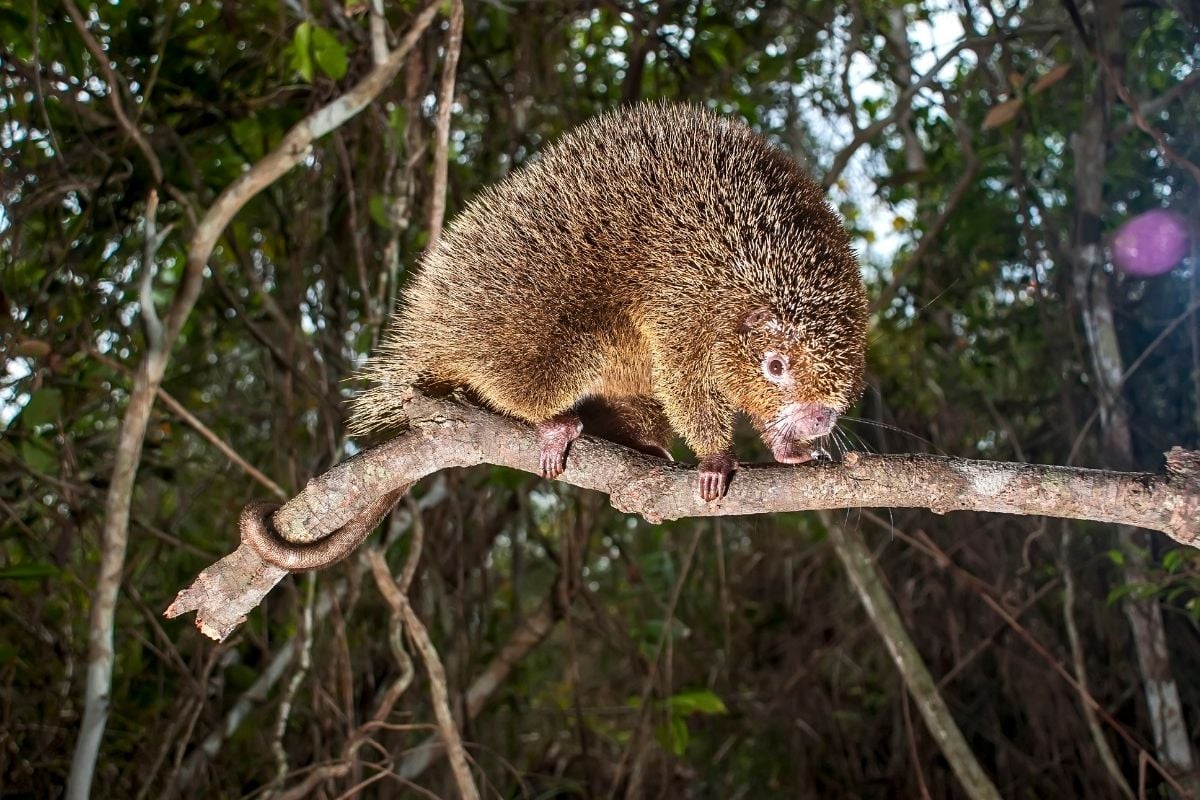 Now you know all there’s to know about porcupine populations across the globe. Note that it is impossible to estimate the global porcupine population due to the difficulty of conducting demographic studies. Fisher predation and human development are the only known dangers to population expansion at this time.