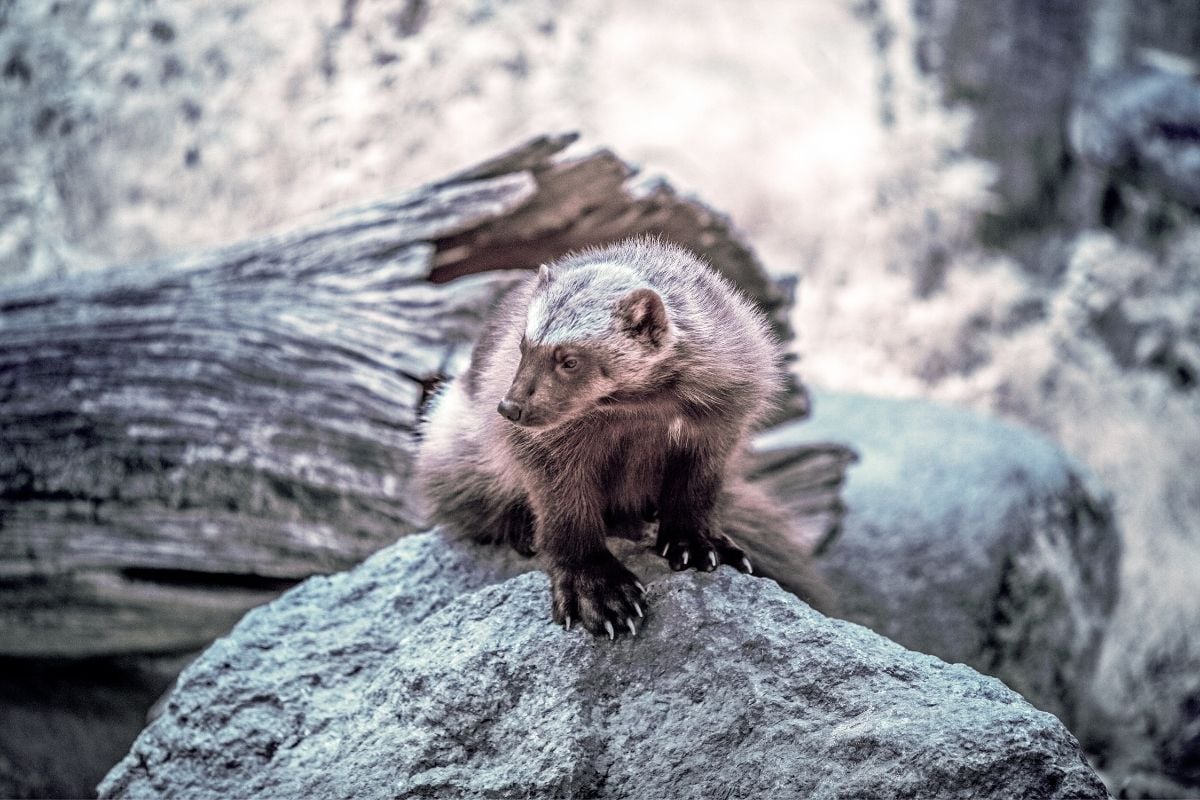 There is only one type of wolverine, although the creature lives in many parts of the world. The scientific name for them is gula and they are related to the weasel family and wolverines are the only living member of this genus or species. They are short, stocky animals, 25-30 inches long and have shaggy hair and big paws.

It can have mahogany brown fur, black and some white on its body. The species tend to vary in color and their sharp claws and large paws are used to hunting prey. Another name for the wolverine is the mountain devil or skunk bear. 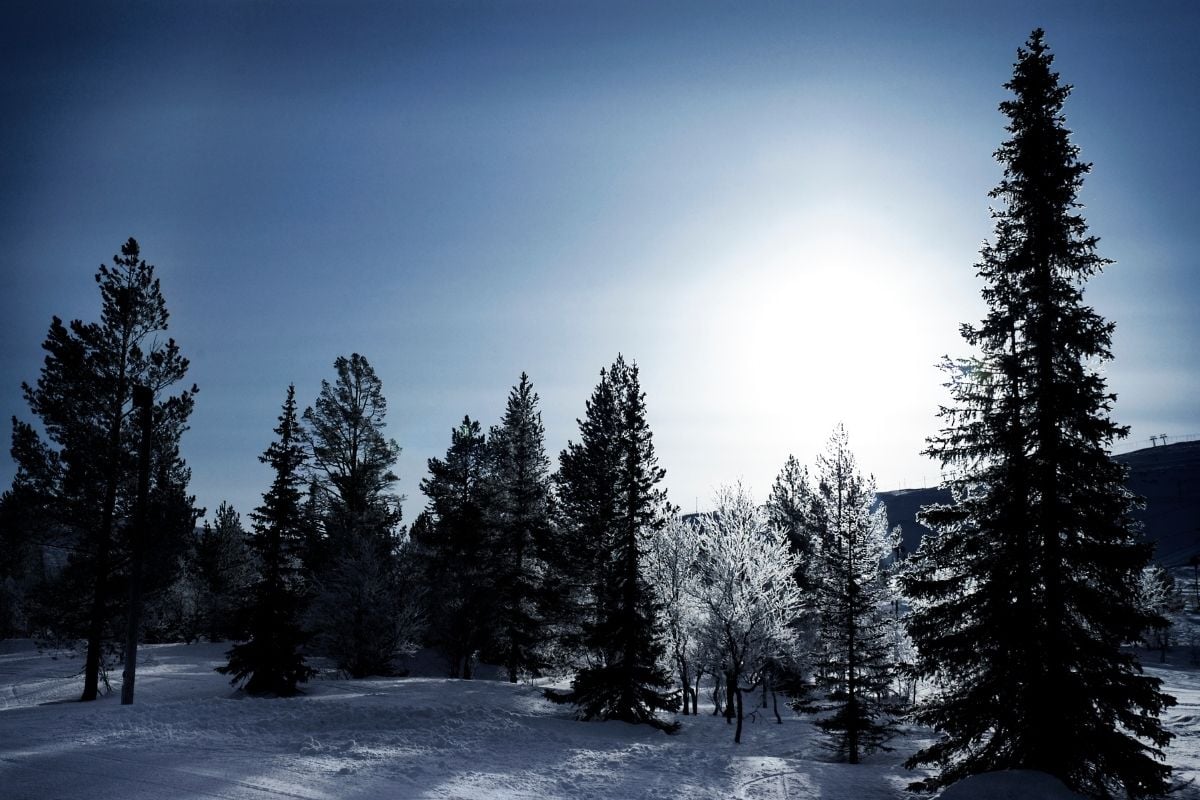 Wolverines live in forests, in the arctic, plains or tundra located in North America, Europe, and Asia. They are creatures that like solitude and need room to roam freely. Wolverines live in cold climates in Russia, Canada and Scandinavia too.

In the United States, it is found in Alaska, the Rocky Mountains, and the Sierra Mountains. In Canada, it is known to live in high elevation mountains,  boreal forests, tundra, and plains.

What It Eats / How Often It Eats

They like to eat meat primarily and hunt small animals, rabbits, rodents and sometimes attack larger animals if they appear to be weak or injured. They will feed on the corpses of animals like deer, elk and caribou. This often helps them survive the winter when there is less prey around.

They are known to dig into burrows and eat hibernating animals too. They do eat plants and berries in the warmer weather. Wolverines feed on wounded or dead animals that are not a threat to them when food is scarce.

Other types of food it eats are bird eggs, insects, roots, seeds and lavaw. It eats a variety of foods.

How It Gets Food

Wolverines often hunt at night and use smell to find wounded or dead carcasses to feed on. They look for small animals that are easy to kill . Sometimes they will attack a wounded animal and in some regions attack sheep to find food.

These animals adapt to the season and are flexible when hunting for food. In the warm weather,  they hunt young reindeer, and, in the winter, they hunt carrion because they are more available in this season. When they find a dead animal, they will often bury the extra meat in the snow or, in the warmer months, bury it in the ground or a tree stump and come back later to eat more.

Wolverines have endurance and energy and can pursue prey for a few days. Sometimes the wolverine takes food away from other animals because it has sharp teeth and claws. In Canada, wolverines eat lynx, porcupines, squirrels, chipmunks, beavers, and gophers. They have molars in the back of their mouth that help them tear off meat from prey that is frozen.

How Long It  Lives

They live from seven to 12 years in the wild. Females in captivity have been known to live up to 16 years. In captivity or zoos, both males and females live 15 to 17 years.

Wolverines will dig a hole or tunnel in the ground where they will sleep at night. They store food in this tunnel for the winter or warmer weather. They sometimes can be found sleeping under rocks and boulders and dig dens in the snowbanks.

Often, the boulders and trees add stability to the structure of their dens. They often sleep during the day and hunt at night.  Wolverines are night creatures and like solitude.

They do not hibernate like some animals but remain active during the winter months.

Types Of Homes It Has 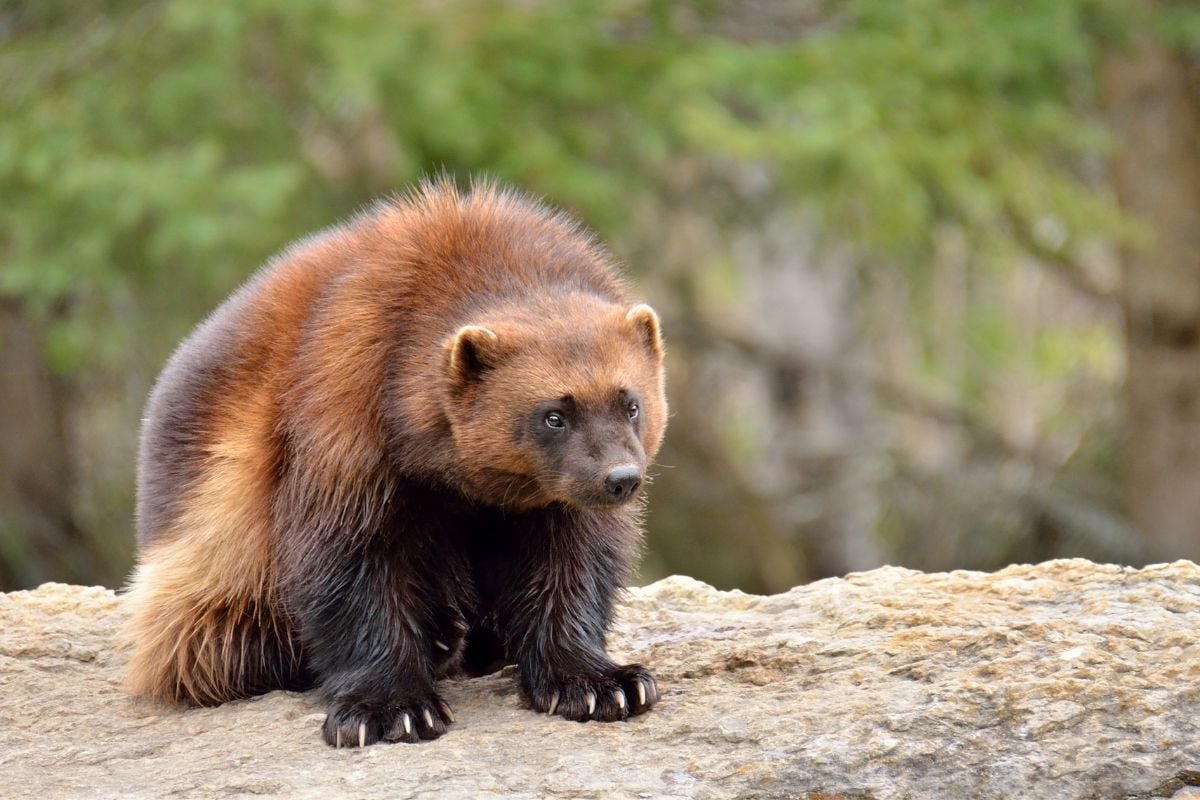 Their habitats are hard to find because they live in remote mountain areas and cold climates. They will often build a den 15 feet below the snow with tunnels under fallen trees and boulders. Biologists now use dogs to help them track wolverine dens in certain geographic areas.

They often tunnel into the ground or cave and put down a bed of grass and leaves to sleep on. They require a large home base to hunt that ranges from 50 to 240 miles long. Their habitats are essential for raising the young and protecting them.

They often create a den in February and use it until May for weaning their young. The dens provide the wolverines with protection when they give birth from February to March. The location of the dens can be ravines, snow covered fallen trees, and peat bogs.

They depend on deep snow during the winter season to protect them from cold temperatures. Wolverines dig elaborate tunnels that often have a complex design to help the wolverine survive. They have roomy tunnels and areas where they live, eat, and raise their young.

Their dens in  the forest may be located in or near one fallen tree or a group of trees. The trees are covered with snow and the tunnels are dug under the snow. The young kits are kept in a maternal den until the kits can follow the mother for short distances.

The kits will be about nine to 10 weeks old when they are weaned. Sometimes the wolverines will abandon their dens when they sense the presence of humans and predators that hunt them for food. Wolverines climb trees and often can be spotted resting in them.

They unleash this scent when they feel threatened and to mark their territory on bushes, trees, and shrubs. The smell is like a skunk and is used to protect them and their family.

Other Interesting Facts About the Wolverines

The male wolverine mates with several females and they mate from May through August. The female experiences delayed implantation, which means the egg is implanted in the uterine wall from December to February. The females give birth from February through March.

The kits are born fully developed with white fur. By September, the pups are independent of the mother feeding them. Male wolverines reach sexual maturity at two years and females at 15 months.

The females create dens to raise the young and give birth to two to three kits or baby wolverines. The female manages the bulk of caring for the young and the male will visit the den and help at times too. Although there are only about 300 wolverines left in the US, the Fish and Wildlife Service refused to put them on the endangered species list.

The species faces climate change, and destruction of their habitats. Wildlife organizations are trying to get the species on the endangered species list and will continue to pursue the matter legally.  The population has been reduced due to the wolverine being trapped for their fur, and their habits being destroyed.

Wolverine fur is prized for its beauty and color. It is used for lining parkas, mittens and moccasins. It can be sold at a high price.

The fur is considered too tough and leathery to be good for making a coat. Wolverines are sometimes compared to superheroes. They are strong, aggressive and fierce fighters.

There is a superhero in the comic books called Wolverine. Most people are afraid of them and would rather never encounter them in the wild. They are brave for small animals and often will attack larger prey when hunting for food.

The wolverine is featured in stories and legends in the eastern and western hemispheres. In Canada it is called carcajou, which means evil spirt. In Scandinavia, it is described as an animal that likes to kill far more than it needs.

Medieval pictures of wolverines show them squeezing themselves between trees after eating too much food, trying to squeeze the food out of their stomachs. The story relates to gluttony. The wolverine was seen by Indigenous people as having all the mischief and cunning that could be fit in the skin of a beast.

Their fierceness is often used to scare off other animals so they can eat the prey they killed. Some tribes believe the wolverines have special powers that link them from the physical world to the spirit world. Quebec, Maine and New Brunswick call the wolverine the Lox and tell stories about them.

The wolverine is described as anti-social and dangerous. One legend tells the story of how the wolverine wanted to kill the bear but not do it directly. He told the bear that he could change the color of his fur to white like the birds.

The bear agreed to let him change the fur color and the wolverine built a strong hut for him to live in. He put hot red stones in the hut and poured water on them. He sent the bear into the hut, and it became too hot and the bear demanded to be let out.

The Lox told the bear that he would only be all white if he stayed in the hut. The bear went back into the hut and the wolverine closed it up tight. The bear wanted to get out again, but the wolverine waited until he was dead.

The Athabaskan people living in Canada told stories of wolverines raiding food and traps set to catch animals. In stories he was a man who stole two human children and raised them as his own. They lived in a tree, and he only fed them fat.

They followed him to where he stored food and ate some meat. When he found out, he was terribly angry at the children. These stories are myths made up by distinct groups of people that lived in the regions where they reside.