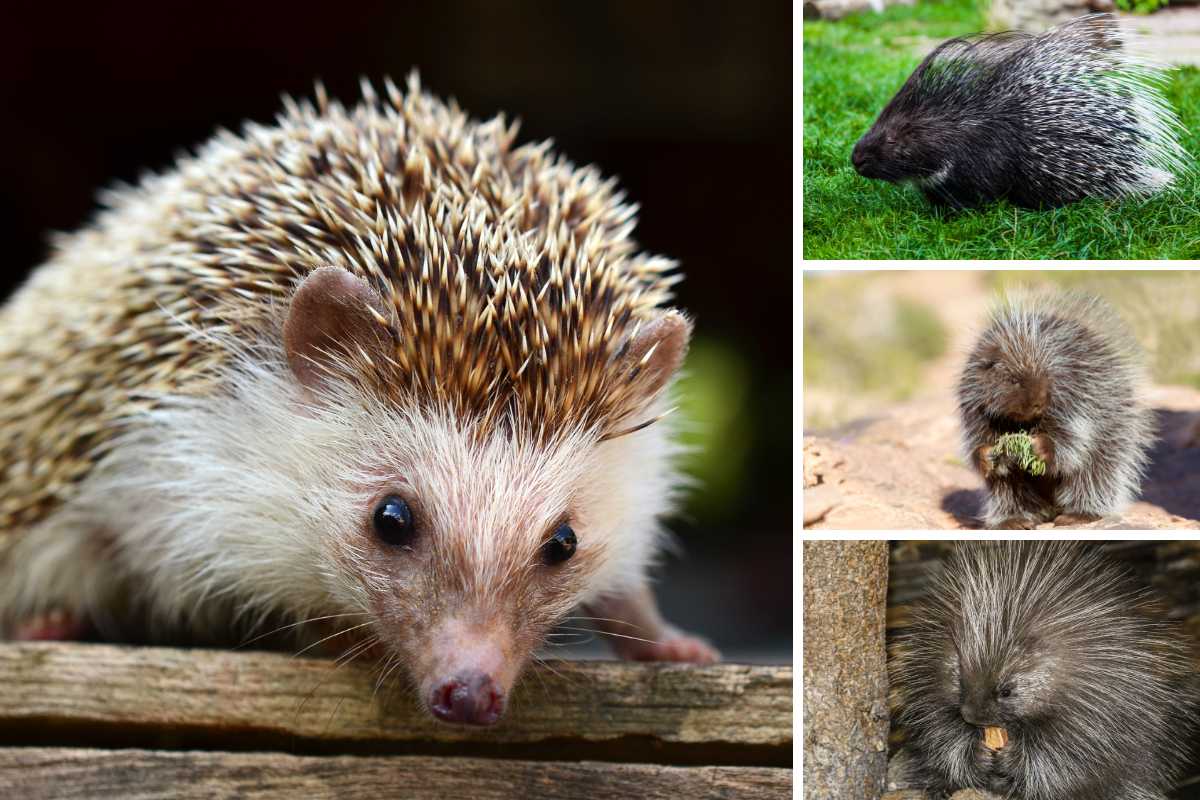 Porcupines are considered rodents. They have brown, yellow fur and stiff quills covering their bodies everywhere except their soft fur-covered stomachs. They are the second-largest rodent, second to the capybara, which is almost double their weight.

The average porcupine weighs only about 20 pounds, and their length is about twenty-five to thirty-six inches full-grown. A male porcupine is bigger than a female. They have a prehensile tail which is like a third arm and can wrap around a tree branch, allowing them to be stable climbers.

They tend to be nocturnal, but you can occasionally find them wandering around during the daytime.

Do porcupines have claws? 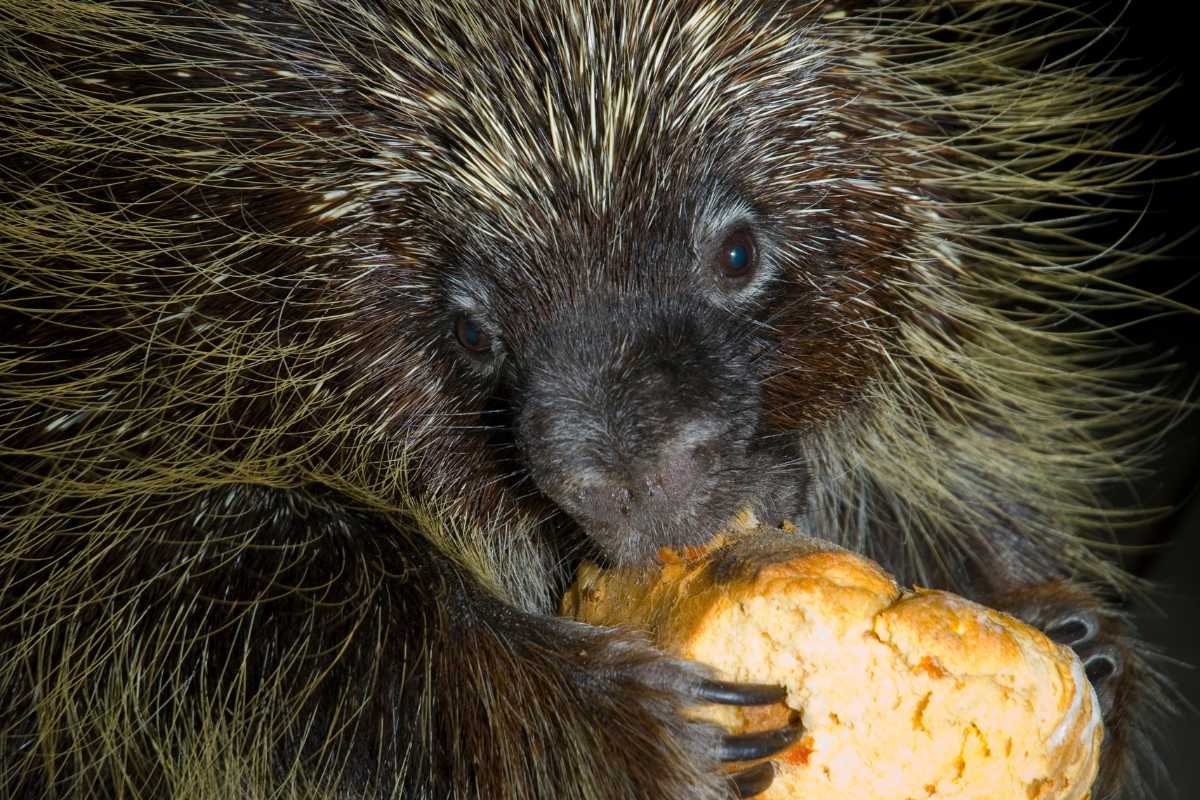 The porcupines’ feet are excellent for climbing trees, which porcupines love to do; it often surprises people to look up in a tree and see an animal the size of a small dog sitting there. It is where porcupines love to be, though, and their feet are designed incredibly well for climbing. Their front feet have four toes, with the first toe being only a stump of a toe.

The other toes have well-developed claws. The back feet have five toes with claws. Each toe has a strong, curved claw with a design that helps the porcupine climb the trees, strip bark to eat, dig plants, or pull berries off the vine.

Porcupines are herbivores that love to eat leaves, twigs, bark, and green plants, and their claws help them do this. The pad of their foot is relatively soft and hairless. Another interesting fact is the ability of their feet to help them swim, and they are excellent swimmers.

Between the buoyancy of their quills and their feet doggy paddling, they glide through the water with ease. You have probably seen porcupine claws for sale if you are a crafter. They are sold online for minimal cost to crafters, and they are not illegal to own.

Do Porcupines Have Ears? 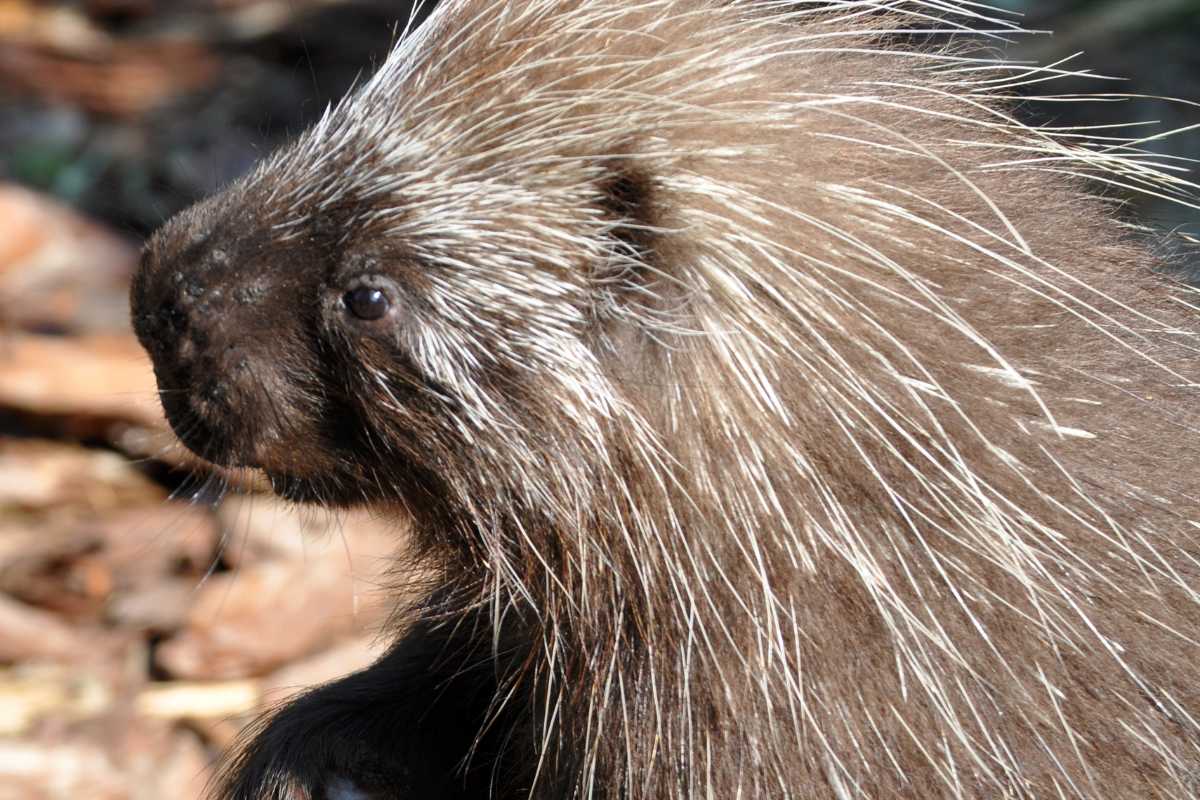 Porcupines have small ears that are difficult to see with the fur and the quills. Don’t let that fool you, though, because they have excellent hearing and a great sense of smell. Before you even realized they were there, they most likely heard or smelled you.

Do Porcupines have Good Eyesight? 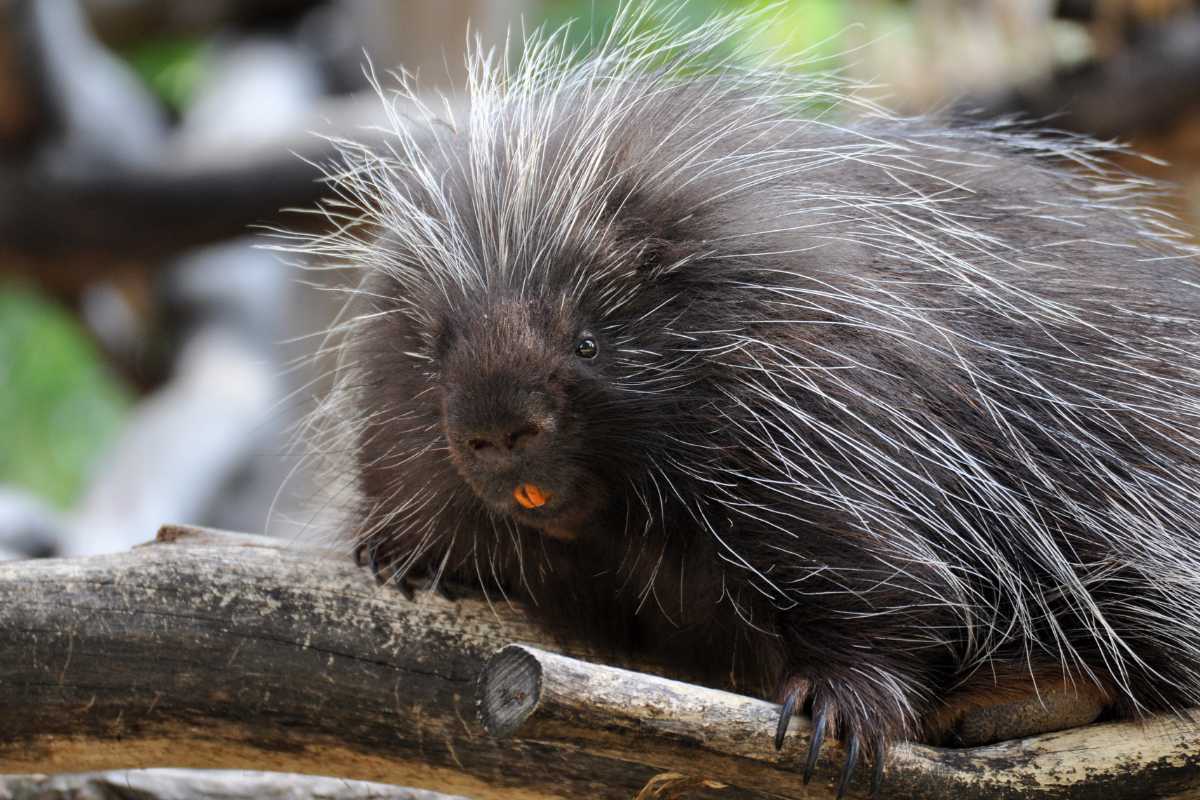 A porcupine will spin in circles while pushing its quills out to protect itself when this happens.

Do Porcupines Have Fur? 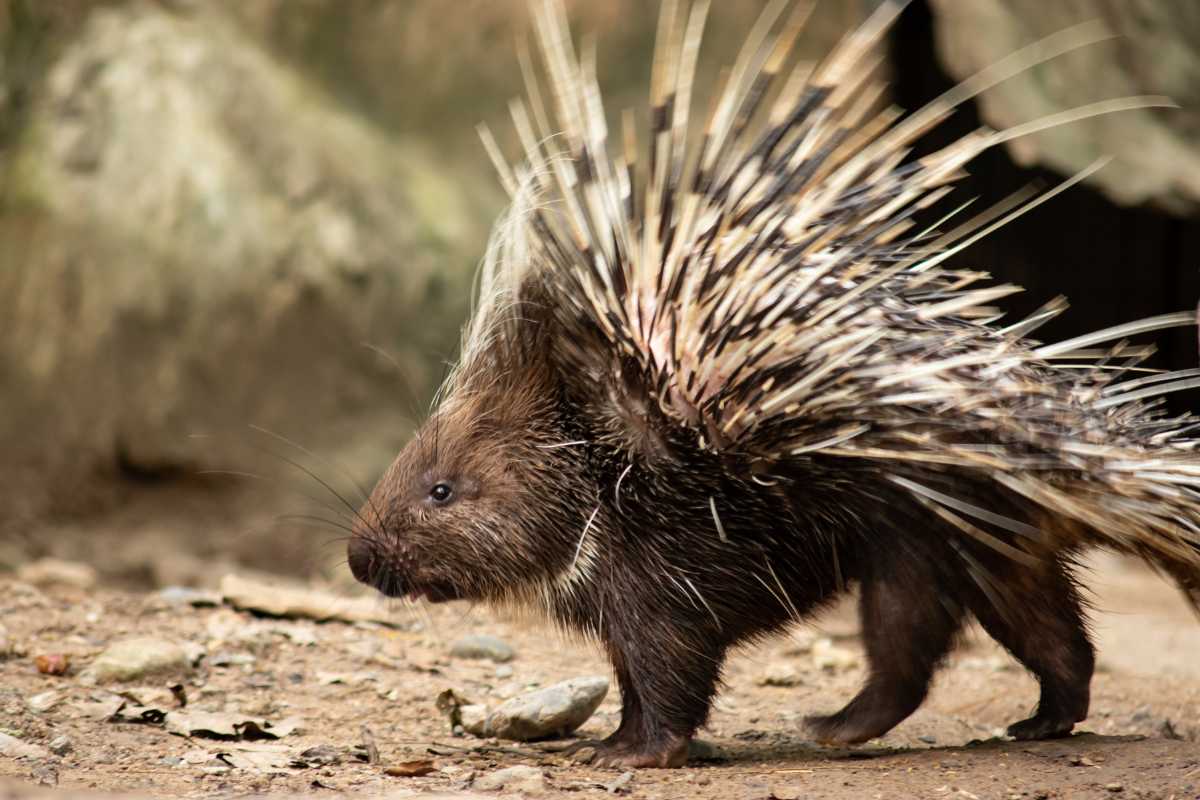 The porcupine does have fur, and it also has quills. A porcupine’s fur is brownish-yellow to black-colored. They have three types of hair: a coat of dark underfur that is somewhat shaggy, a lighter-colored belly fur, and white or yellow quills.

Quills are just hardened hair and are sometimes called guard hair. The softer fur looks like any other rodents’ fur except that it has quills growing with it too. So that makes the porcupine very different looking than other rodents.

Like other animals, a porcupine does shed its fur and quills. The quills begin to grow back at about one millimeter per day within a few days. So, a porcupine will also have quills of varying lengths and hardness.

The bottom of a porcupine’s feet does not have any fur; they are soft pads. This design helps the porcupine do the task it likes most; climbing trees. The furless pads keep the porcupine from slipping. 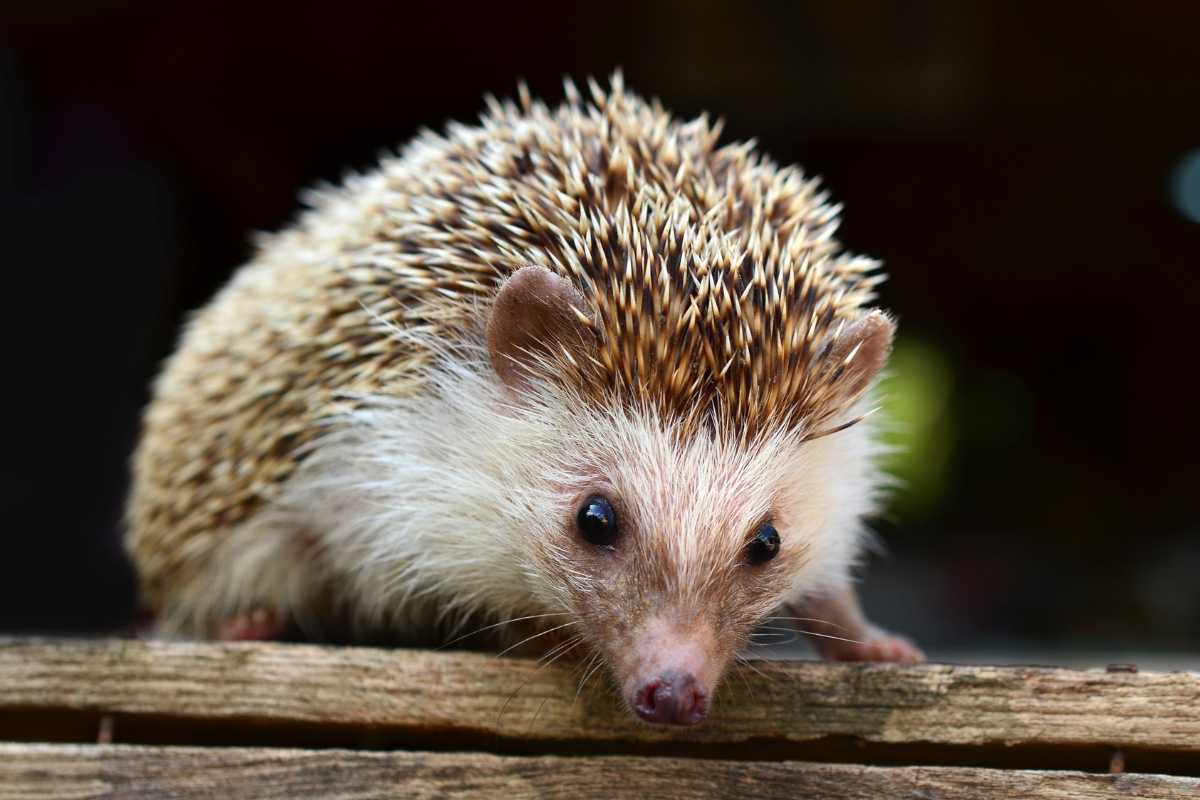 Baby porcupines are born with soft, reddish-colored fur; this protects the porcupine mother as she gives birth. Within a few days, the guard hair keratin begins to harden. The baby porcupine can move quite well shortly after birth, so they need protection from the quill.

They only weigh one pound at birth and stay with their mother for about four to five months. The porcupine has one of the most prolonged periods that a rodent remains with its mother. Even though they stay with their mother, they grow fast and will double their birth weight in two weeks and be four to six times larger within a few months.

The quills of the porcupine earned this animal its name. The Latin name Hystricidae, Erethizontidae, means quill pig, and it sort of looks like a little pig. Other names it is referred to are prickly rodents and spiny animals.

The point has tiny burrs that go into your skin quickly if you get stuck but are very hard and painful to remove. A porcupine can have over 30,000 guard hairs on its body. The average size of the quill is about two to three inches, but the African crested porcupine, which is the giant porcupine, can have quills that are a foot long and as thick as a straw.

The soft fur of the porcupine helps keep the porcupine warm because this animal does not hibernate. The quills or guard hairs were frequently used in American Indian crafts. 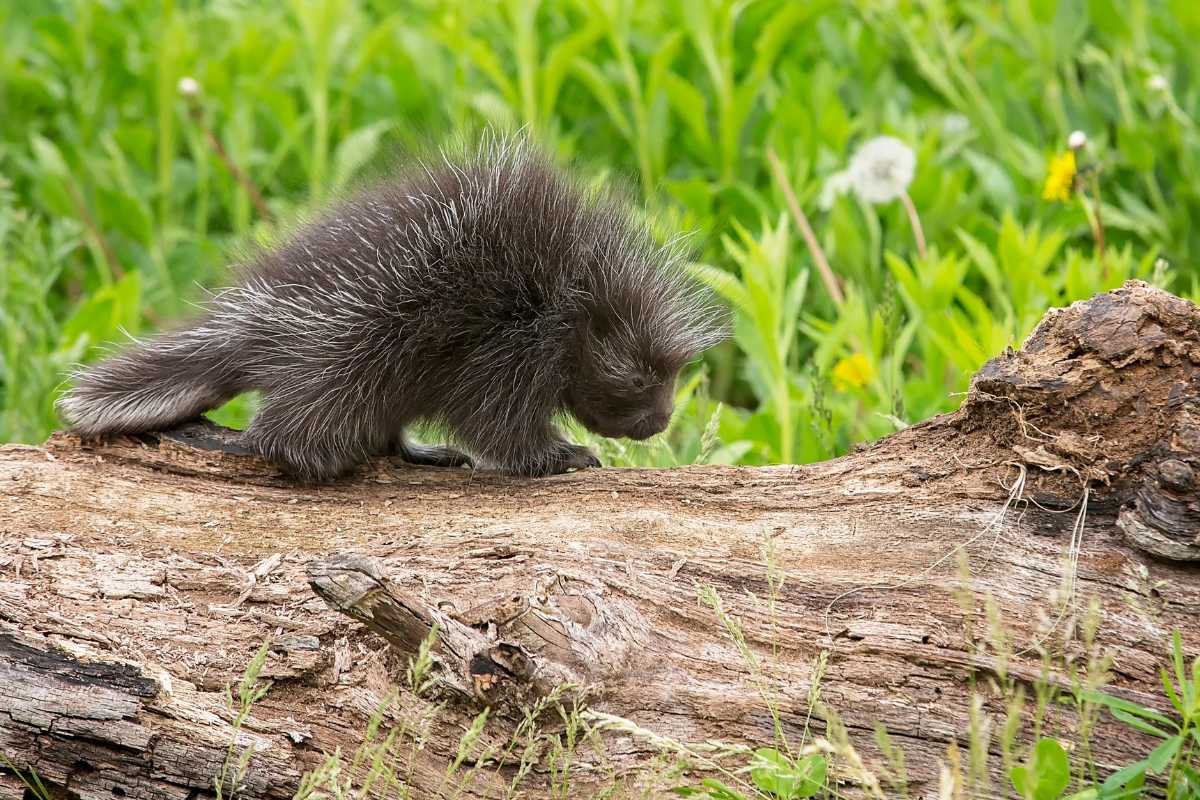 The use of porcupine quills is probably the oldest form of embroidery in the Native American culture. It is referred to as the Art of Quilling, and beautiful work is exhibited in many museums. American Indian women would dye the quills in beautiful colors and use them to adorn bags, necklaces, and clothing.

The quills were used in decorations long before glass beads were brought to them by European traders. American Indians valued the porcupines as both a source of food and decoration. They believed that the porcupine had medicinal properties.

An American Indian woman from the Lakota tribe would sneak up on a porcupine and throw a blanket over them to catch the quills. Other tribes would kill the porcupine with a long, sharp-ended stick, eat the meat, mount the pelt on a piece of wood, and carefully pluck out the quills. The different sized quills are used for different types of decoration.

If you admire this amazing animal in the wild, you need to be careful and keep your distance. You will get quilled if you get too close and frighten the porcupine. When the porcupine’s quills stick you, there will be hundreds, and it will be painful.

The best place to observe these animals is in your local zoo, and they are interesting and unique animals.