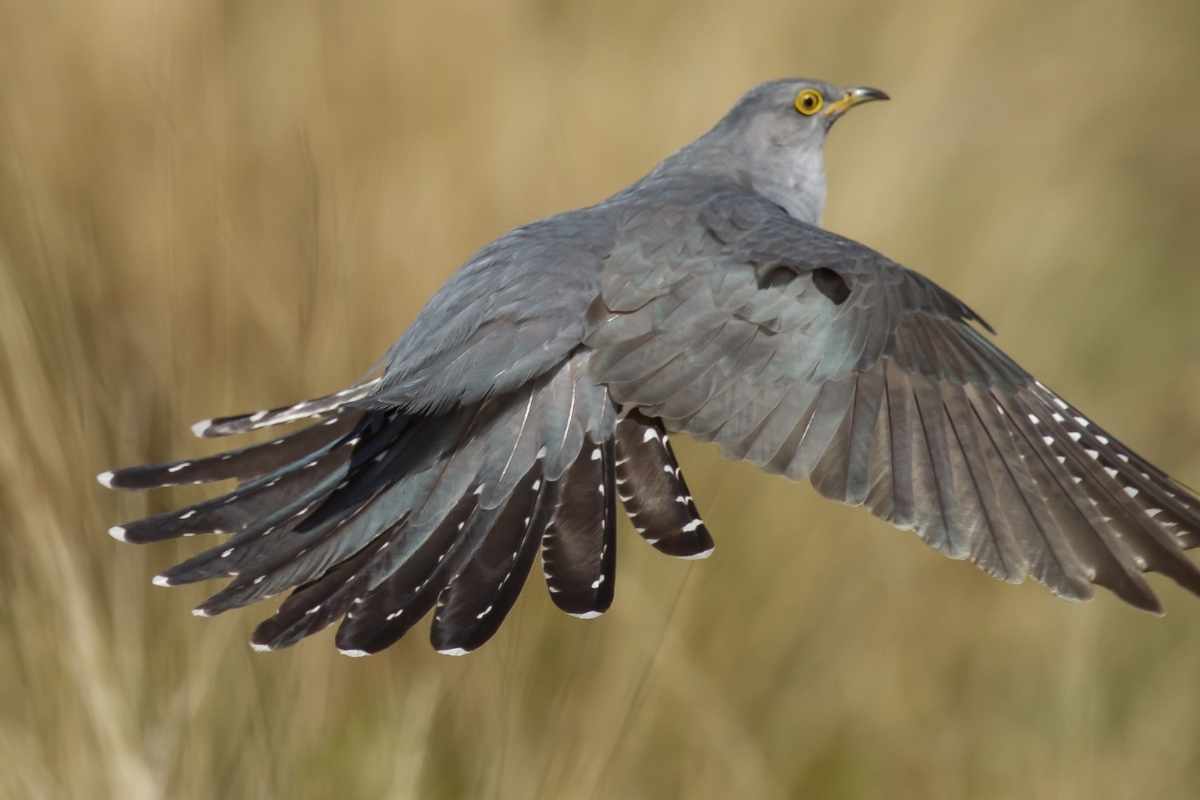 The common cuckoo (scientifically known as Cuculus canorus) is one of the members of the cuckoo bird order and a member of the Cuculidae family. In addition to cuckoos, Cuculiformes includes these birds –

Cuckoos are considered medium-sized birds that range in size from six inches to approximately 30 inches. Most species of cuckoos live in trees, although some are considered ground dwellers. Although they are found across the world (except in Antarctica), most cuckoos will be located in tropical locations.

Some varieties are migratory, although some are considered resident birds. Certain varieties of cuckoos are brood parasites, which means they rely on other birds to raise their young. They can accomplish this unusual goal because the cuckoo’s eggs resemble the eggs in the chosen host nest and hatch faster than the eggs of the host birds.

As an insectivorous, the cuckoo bird feasts on insects (often large ones), caterpillars, fruit, and other animals. But cuckoos are secretive birds. They are best known for a wide variety of bird calls that range from whistles, or flutes, etc.

The cuckoo has historically played a significant role in human culture for many millennia – appearing as Hera in Greek mythology and associated with Shakespeare’s Love’s Labor’s Lost. In Japan, the cuckoo is symbolic of unrequited love. 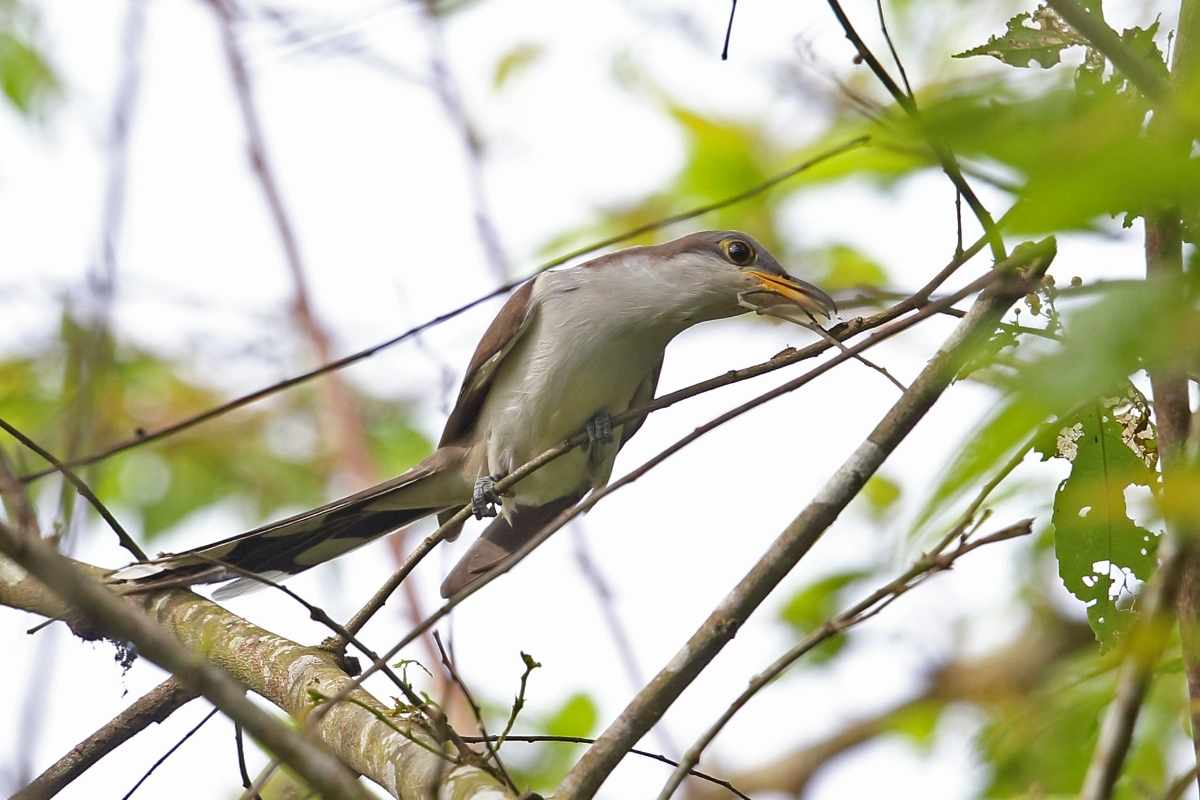 Yellow-billed Cuckoos are long-tailed and slender birds that are easy to hear (with a unique and distinctive knocking call) but much more challenging to find in their natural deciduous woodlands habitat. They are often called storm crows or rain crows because they can often be heard when thunderstorms approach. They are migratory in nature and native to the eastern U.S. and Canada, Latin America, and most of eastern South America.

The Yellow-billed Cuckoo measures up to a foot in length. They feast on insects, sometimes catching them mid-air, and are one of the few that can eat hairy caterpillars. 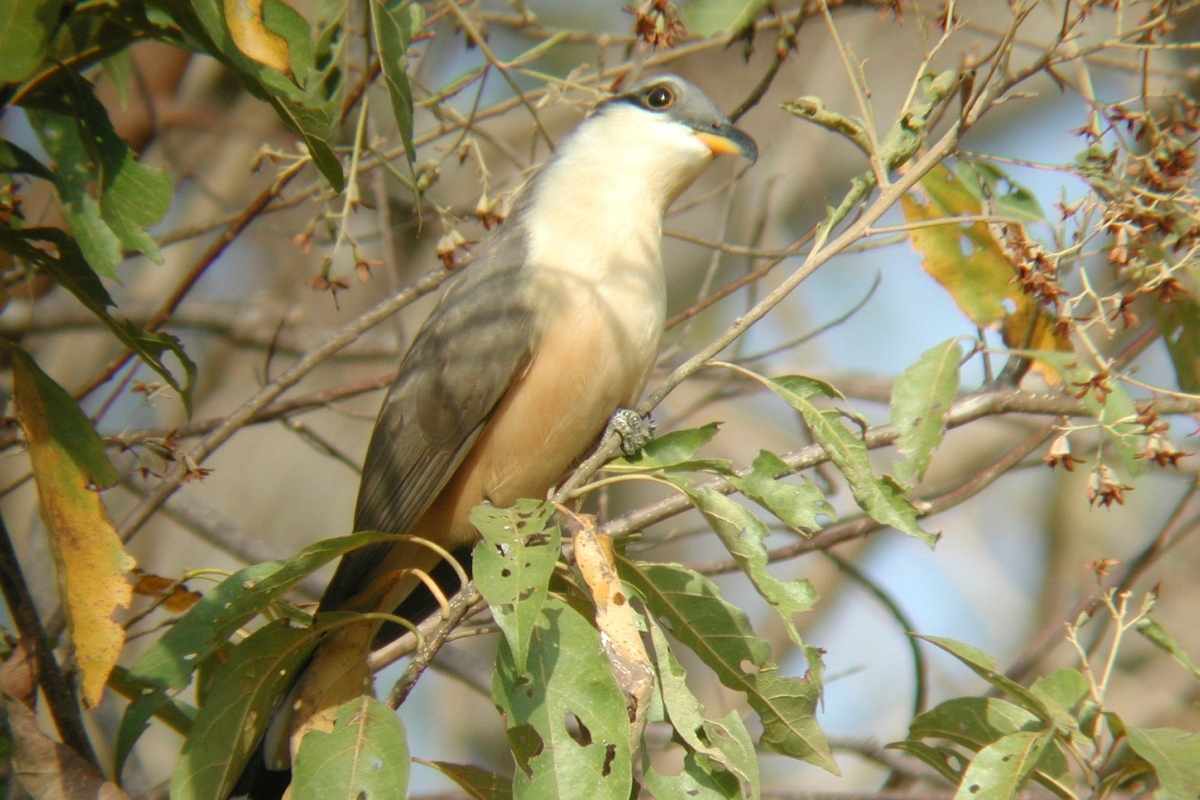 The Mangrove Cuckoo is a quiet and secretive bird. It is slender with a long tail. It lives, as its name implies, in entangled mangrove swamps of south Florida, Latin America, and the Caribbean. This cuckoo variety grows to more than one foot and can have a wing span of up to 17 inches.

The Mangrove Cuckoo prefers to eat grasshoppers and caterpillars but will also feast on spiders, fruit, snail, and other insects. This type of cuckoo is easy to spot due to its black face mask and the yellow ring that surrounds its eye. 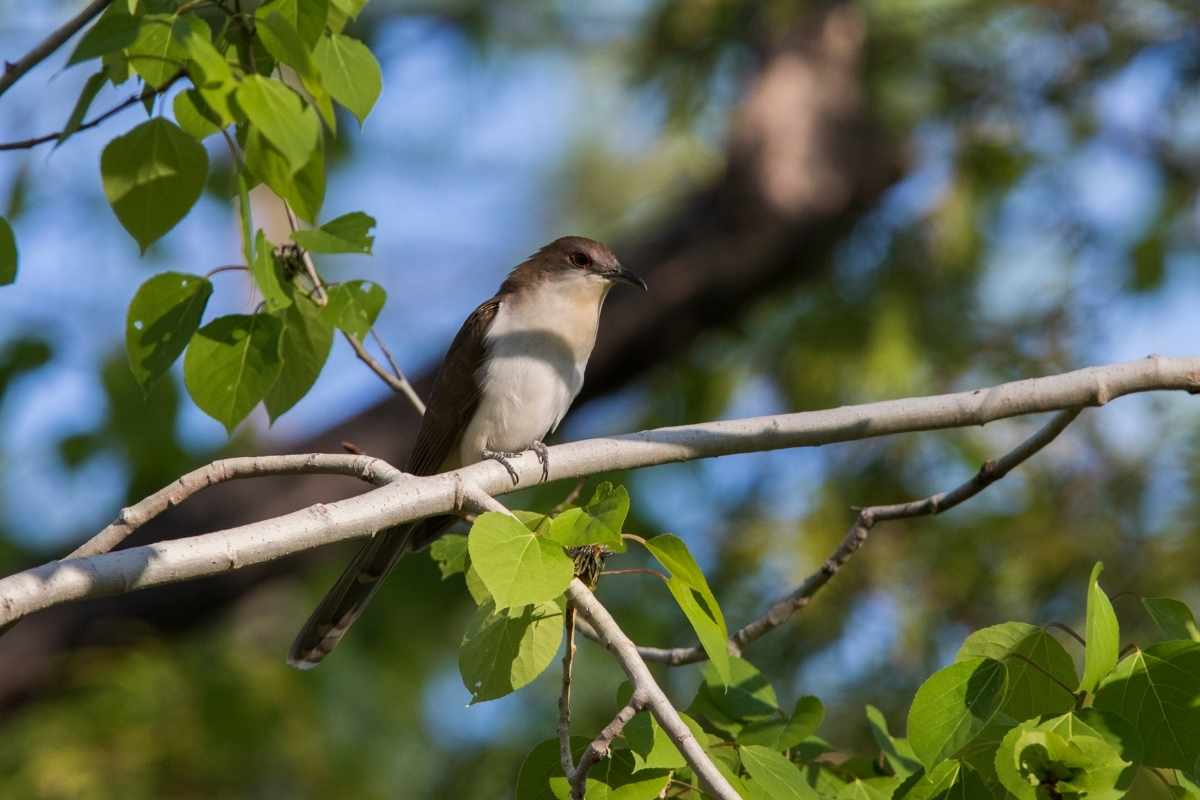 Its wingspan exceeds 17 inches. These cuckoos forage on insects, berries, snails, spongy moths, and eggs from other bird species. The most distinguishable feature of its brown body is the bird’s red eye ring and the tips found underneath its tail feathers. 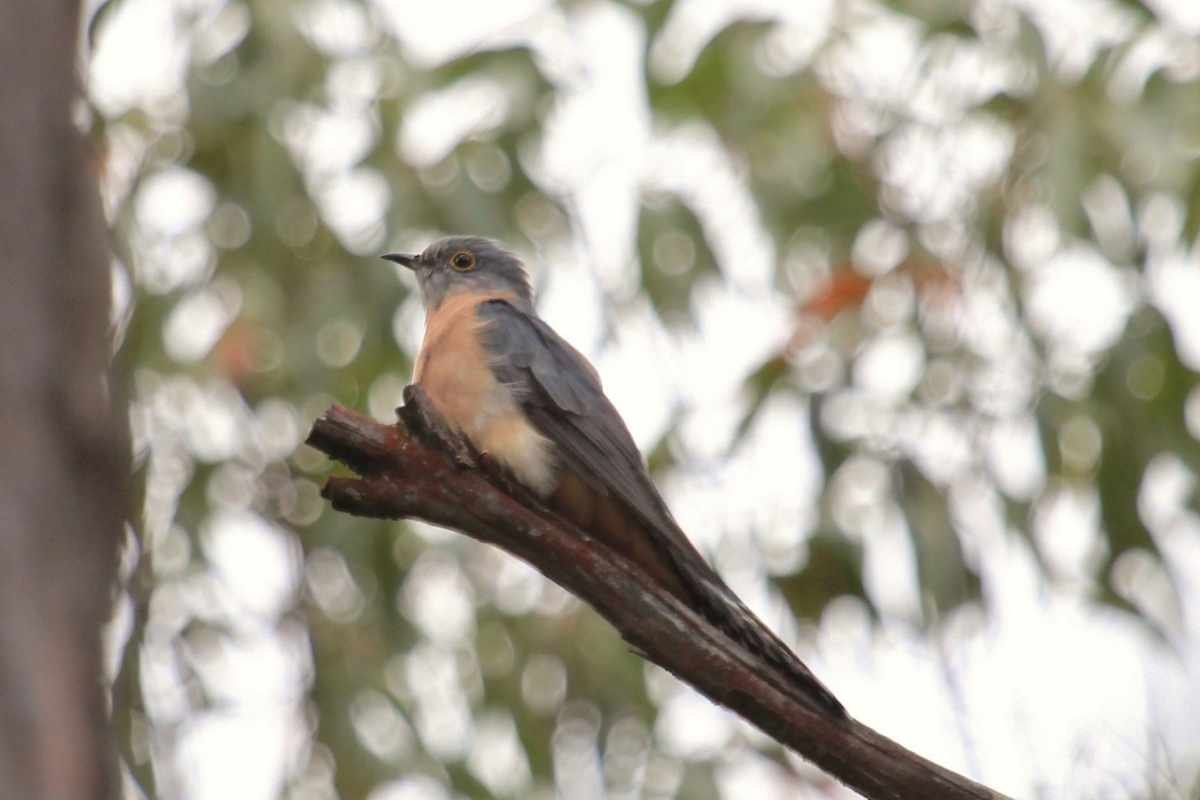 Fan-tailed Cuckoos can be found in Australia (mainly along the country’s coasts), New Zealand, New Guinea, Fiji, and the Solomon Islands, among others. Their natural habitats include tropical (and subtropical) temperate forests, as well as mangrove and montane forests and gardens. They are medium-sized birds that typically measure no more than 11 inches in length.

The Fan-tailed Cuckoo feast on various insects, vegetables, fruit, and small mammals/reptiles. These cuckoos have a yellow eye ring with a slate gray head and wings.

The Smooth-billed Ani, is a mid-sized bird in the cuckoo family. It is native to shrubby habitats of the Caribbean, south Florida, and much of eastern and central South America. The Smooth-billed Cuckoo, with its glossy black look, grows to more than 14 inches in length.

They tend to be better runners than when in flight. These cuckoos tend to exist in noisy groups, feasting on insects and lizards, and even fruit when the dry season arrives. When eating in groups, the Smooth-billed Cuckoo usually has one member perched high above as a lookout for potential danger. 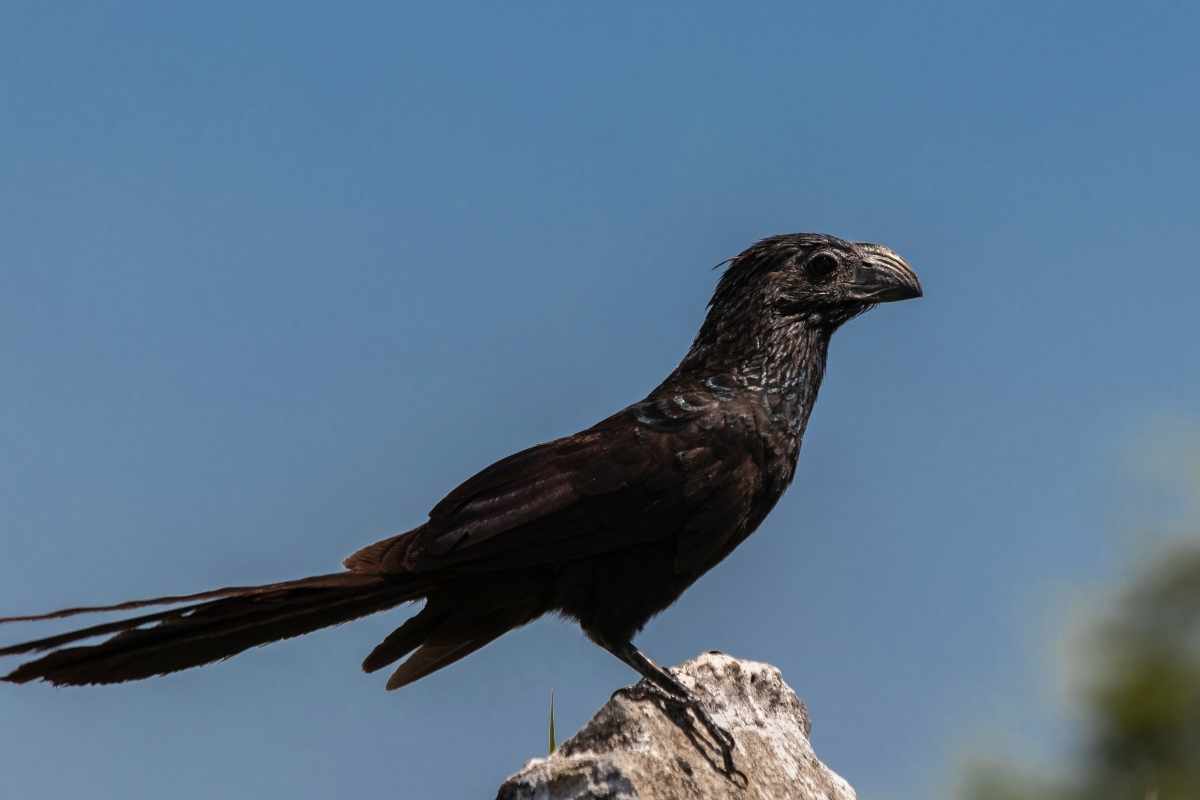 The  Groove-billed Ani, like all other Ani species, live in groups that manage and protect a collective territory. They are found as a resident species in the Southern United States (mainly in Texas), through Central America, the Bahamas, and parts of northern South America – preferring orchards, pastures, and savannahs. The Groove-billed Ani grows to about 13 inches in length, with a wingspan that ranges from 16 to 18 inches.

These birds in the cuckoo family feast on insects plus available fruits and seeds. 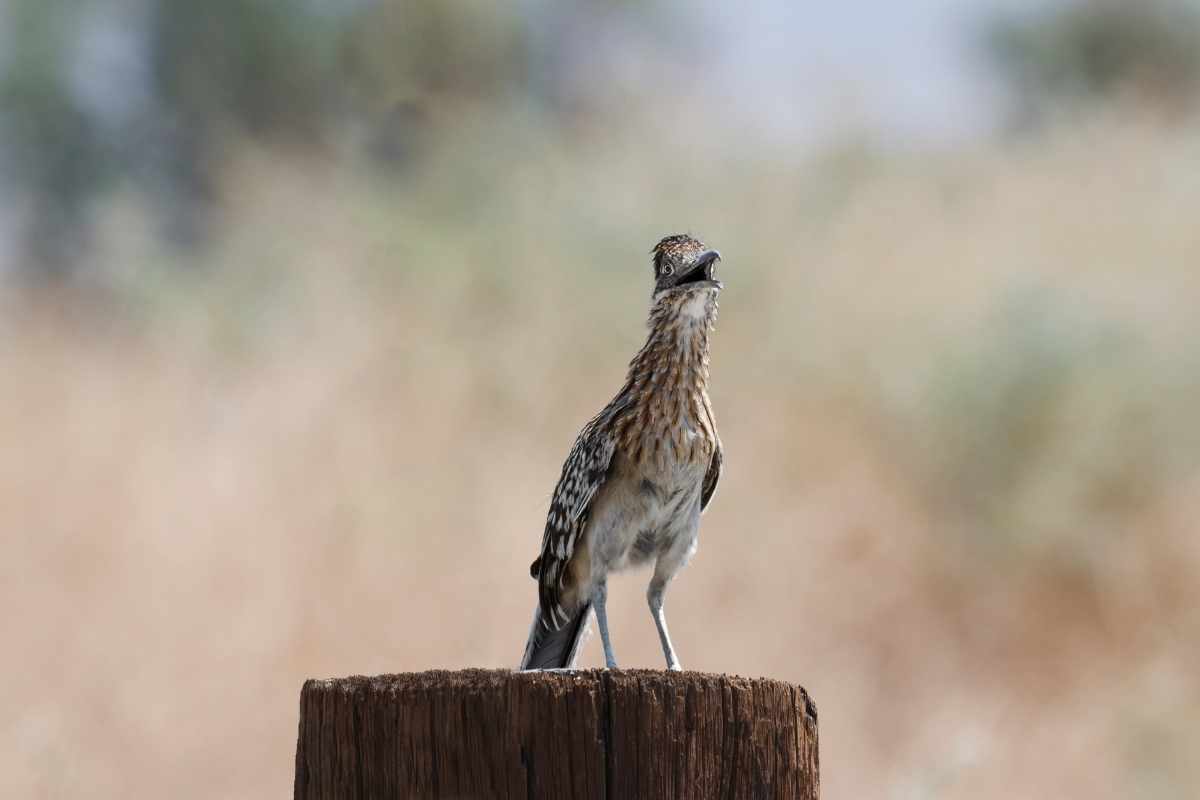 The Greater Roadrunner (with a scientific name that translates to Californian earth cuckoo), is a bird that is designed to run; with an ability to outrace a human opponent. They are native to Mexico and parts of the American Southwest (although they have been seen as east as Missouri) – thriving in harsh environments like the Desert Southwest. The Greater Roadrunner grows to about two feet in length, standing about a foot tall.

These birds can fly, although they have the ability to run as fast as 20 MPH or more.

The Lesser Roadrunner is a slightly smaller version of the Greater Roadrunner, reaching a maximum length of 18 inches. They inhabit much of the Americas, from the southern U.S. through Central America. The Lesser Roadrunner prefers either overgrown tropical foothills and lowlands or dry and brushy woodlands.

This bird can be elusive at times but can also run as fast as 20 miles per hour. The eye ring of the Lesser Roadrunner is lavender to bright blue, and the iris of its eye is yellow to brown. These opportunistic eaters find various fruit, seeds, frogs, and insects (like caterpillars and grasshoppers) – including roadkill.

See also  15 Birds That Are Similar to Ducks 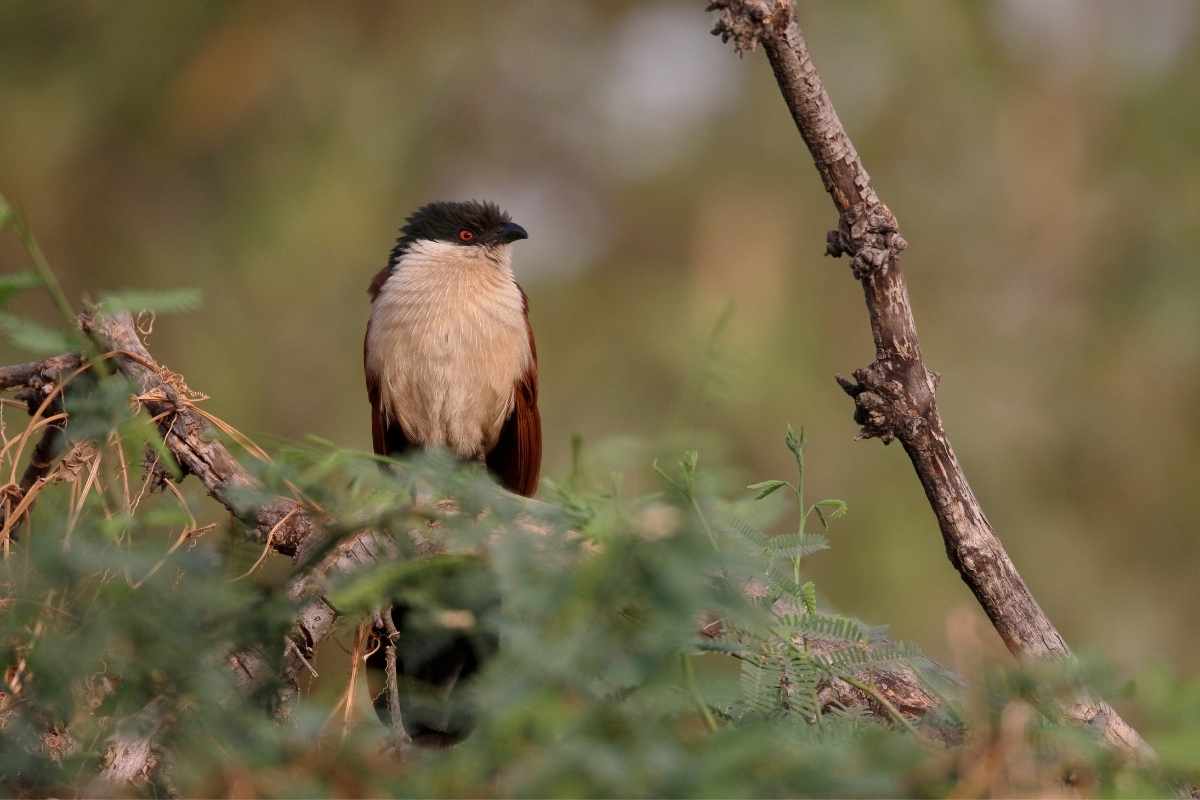 The Buff-head Coucal is a larger cuckoo type of bird with unique patterns. They live in tropical or subtropical lowlands and forests endemic to the central Solomon Islands. They grow to more than two feet in length and are considered among the largest cuckoo varieties.

The Buff-headed Coucal mostly feasts on the ground, eating what is unique to its environment. They tend to create duets of snoring noises but also can create barking and coughing noises as well. 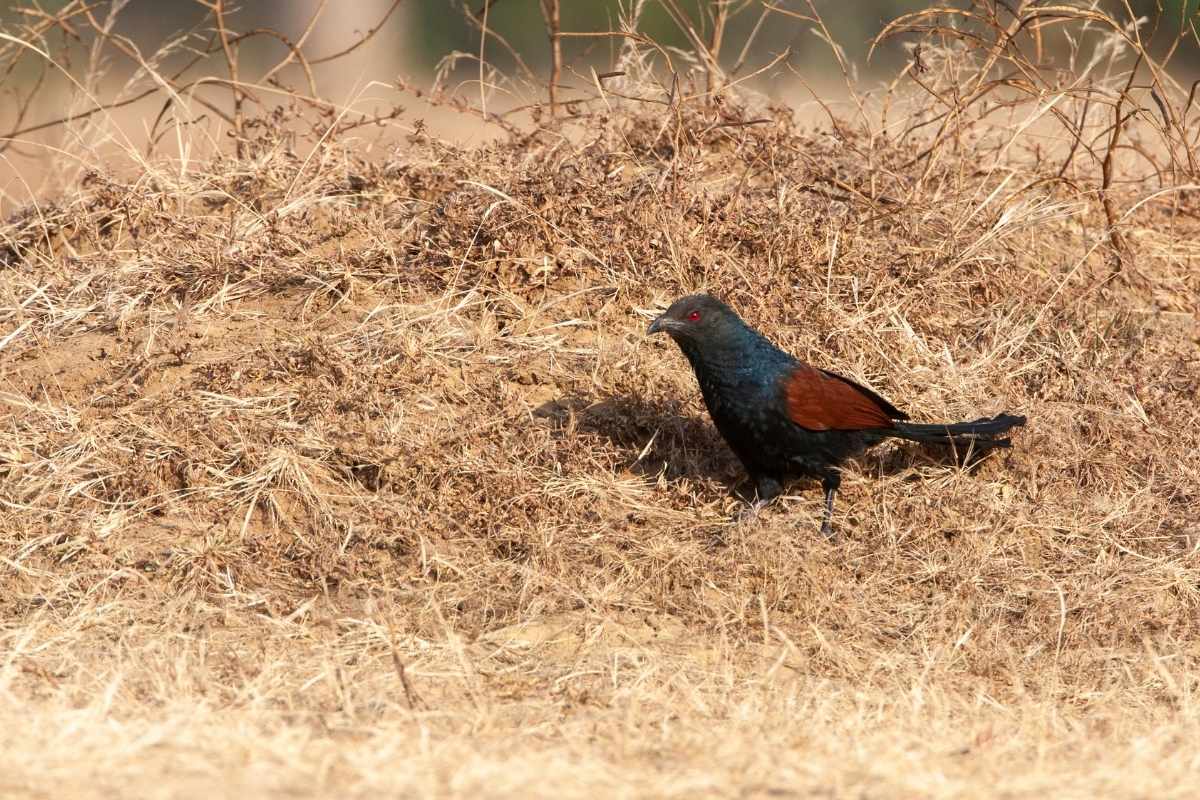 The Black Coucal is a small, uncommon bird that lives in the southern regions of Africa – from Angola to Nigeria, Uganda, and Zambia, among others. Most Black Coucals are about a foot in length. Depending on their exact habitat, some Black Coucals are migratory while others are location residents.

These black members of the cuckoo family live generally below a 5,000 Feet altitude, although some may venture higher. Their name reflects their distinct vocalizations, which include a “kuu-kuk” plus both accelerating/decelerating notes. 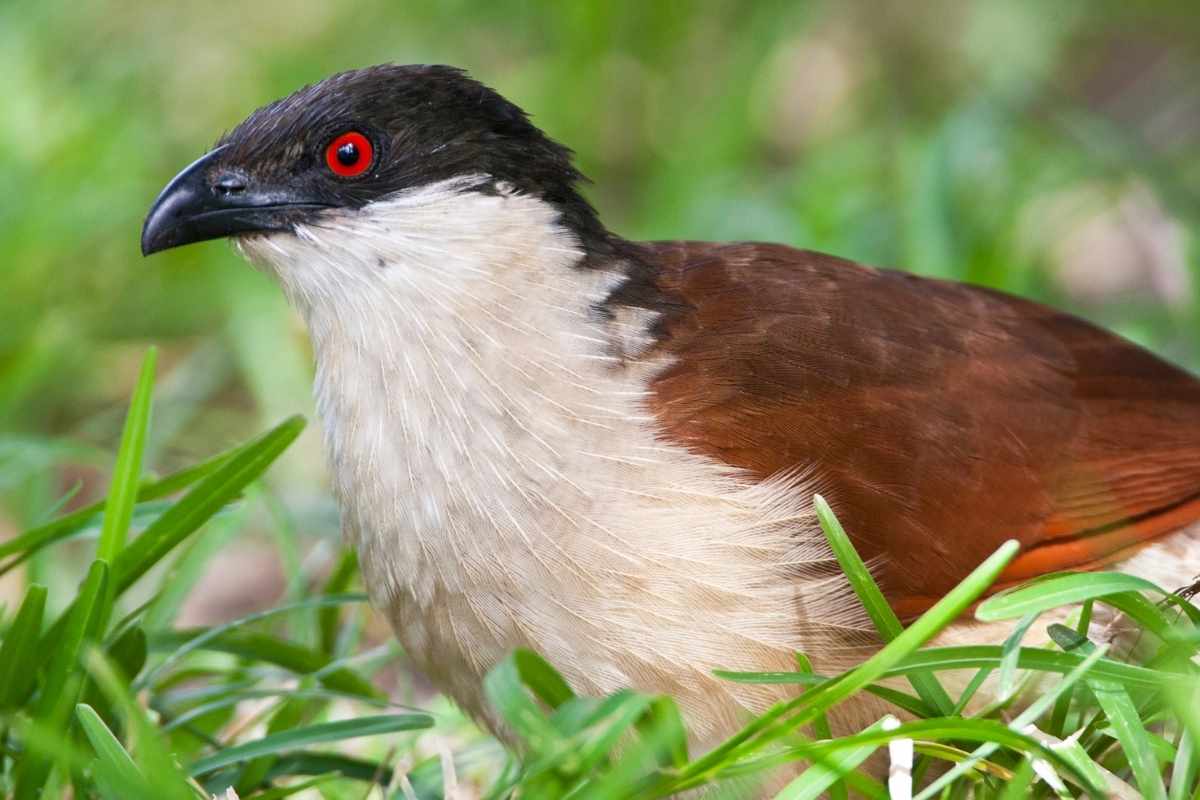 The Senegal Coucal is a recognized member of the cuckoo family that is endemic to mid and southern Africa – especially points south of the Sahara Desert. This medium-sized bird can grow to fifteen inches. Their habitat includes scrub and thicket areas or tall grasslands on the edge of a forest.

The Senegal Coucal feast on insects and small vertebrates – including low-to-the-ground vegetation. These birds are distinguishable by their red eyes and chestnut-colored wings against a creamy white underbelly. 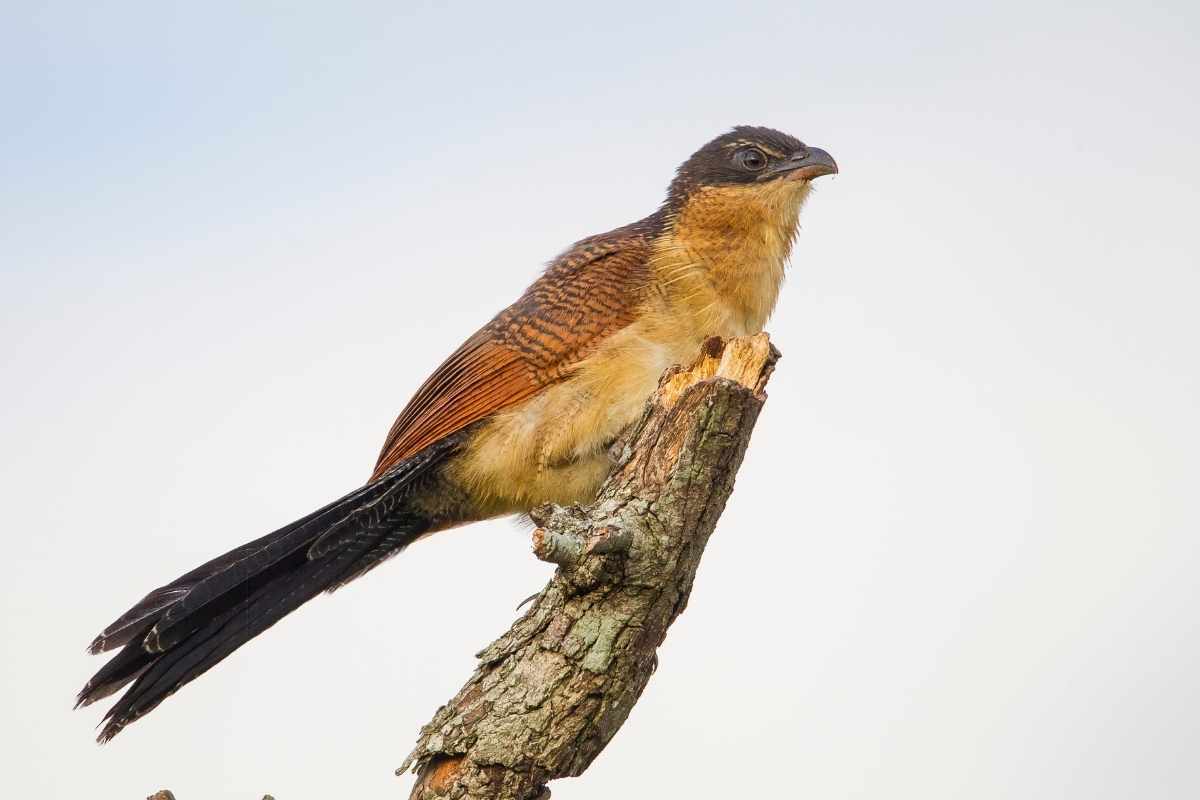 As a member of the family of cuckoo birds, the Green-Billed Coucal is endemic to the wet areas of Sri Lanka – south of India. They prefer areas of dense undergrowth within humid forest locations. The Green-billed Coucal, which has a purple to black body, feeds on a variety of insects, smaller vertebrates, and caterpillars but loves snails.

The Green-billed Coucal is an elusive bird but can be heard more often than seen. Their vocalizations vary. 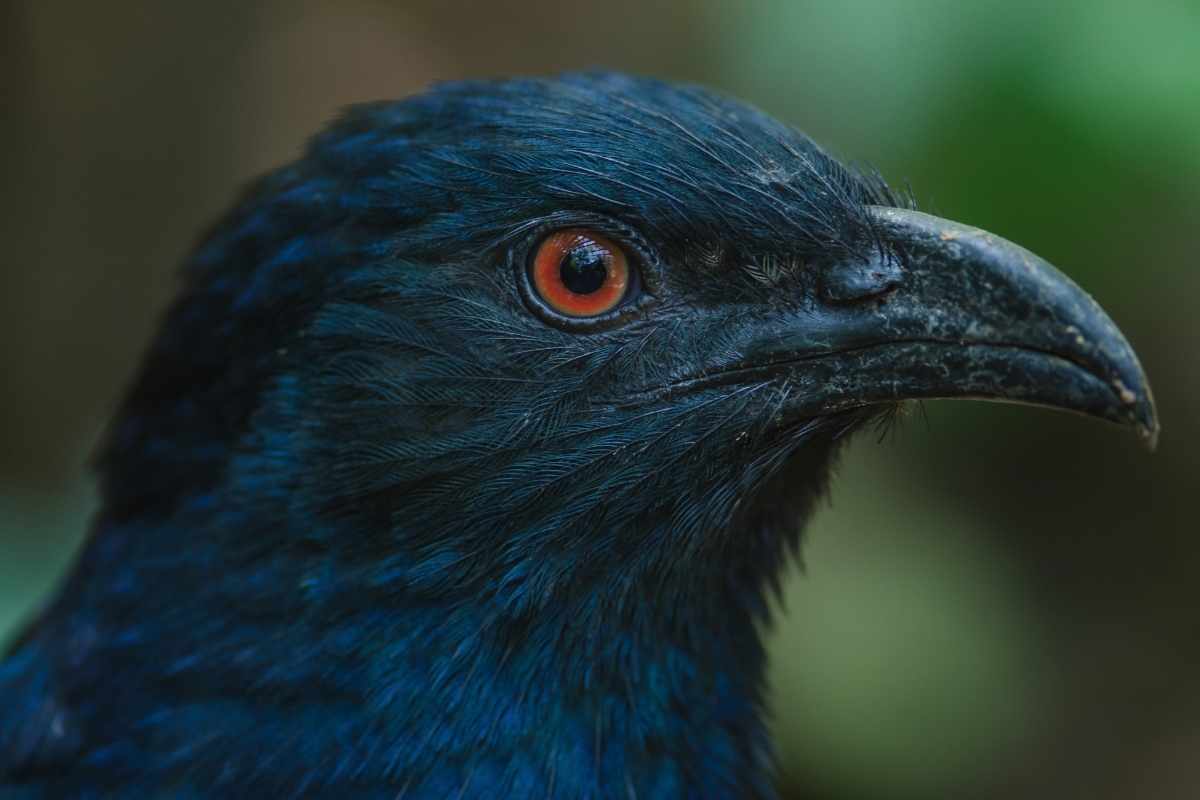 The Black-Hooded Coucal, which is native to Mindoro, Philippines, is a large type of cuckoo bird. These coucals, considered among the most endangered in the Philippines, inhabit forest and lowland areas, avoiding more open environments and habitats. Their preference is to live beneath thick canopies and dense tangles of vines.

The Black-hooded Coucal has dark wings with a long tail that is an iridescent blue. These birds have black heads and dark bills. 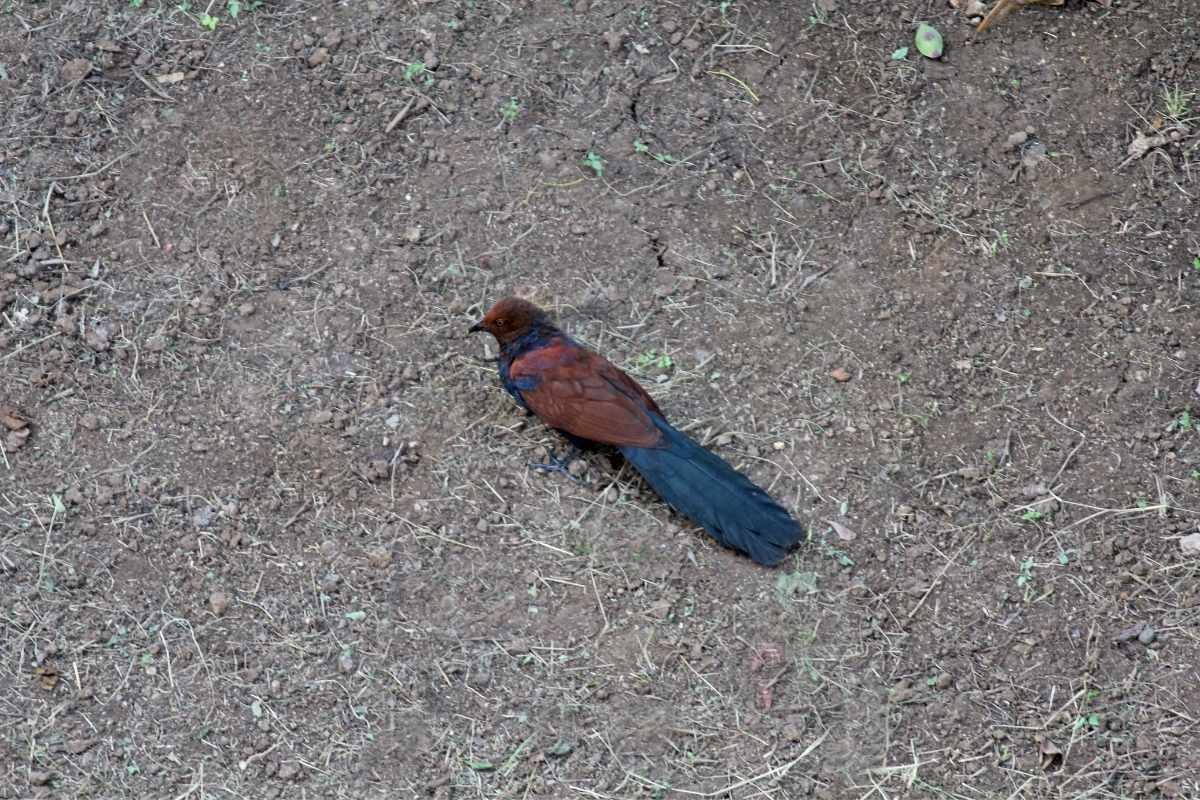 The Short-toed Coucal is a member of the cuckoo family, characterized by its long tail, black legs, and red eyes. This type of coucal lives in subtropical and tropical regions of Thailand, Brunei, Malaysia, and Indonesia. Its preferred habitat includes moist shrubs or wet lowland forest areas.

These birds are elusive, but it is thought they are solitary and resident birds – staying in the same location throughout the year. They are opportunistic feeders, foraging on the ground and finding insects and other larger animals to eat. 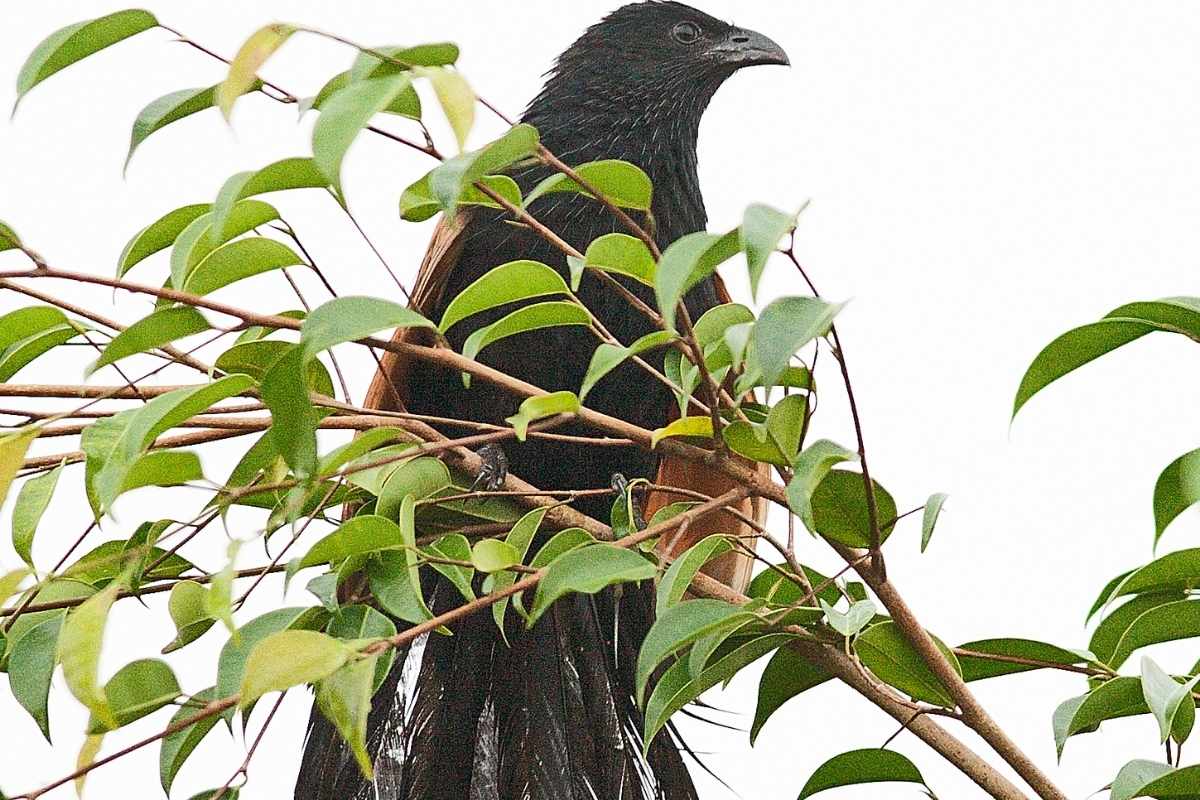 Found exclusively in Java, Indonesia, the Sunda Coucal is a member of the cuckoo family. The Sunda Coucal can be found living in swamp forests, estuaries, scrubby coastal marshes, mangroves, and fresh or brackish water areas. These beautiful members of the cuckoo family have red eyes and a black body, highlighted by reddish wings and a thick black bill – with a pronounced hook at the end.

They forage on a variety of beetles, moths, grasshoppers, snakes, and frogs. These types of birds are not as vocal as other coucal varieties but can sometimes be heard, producing a monotonous pattern of fast hoots. 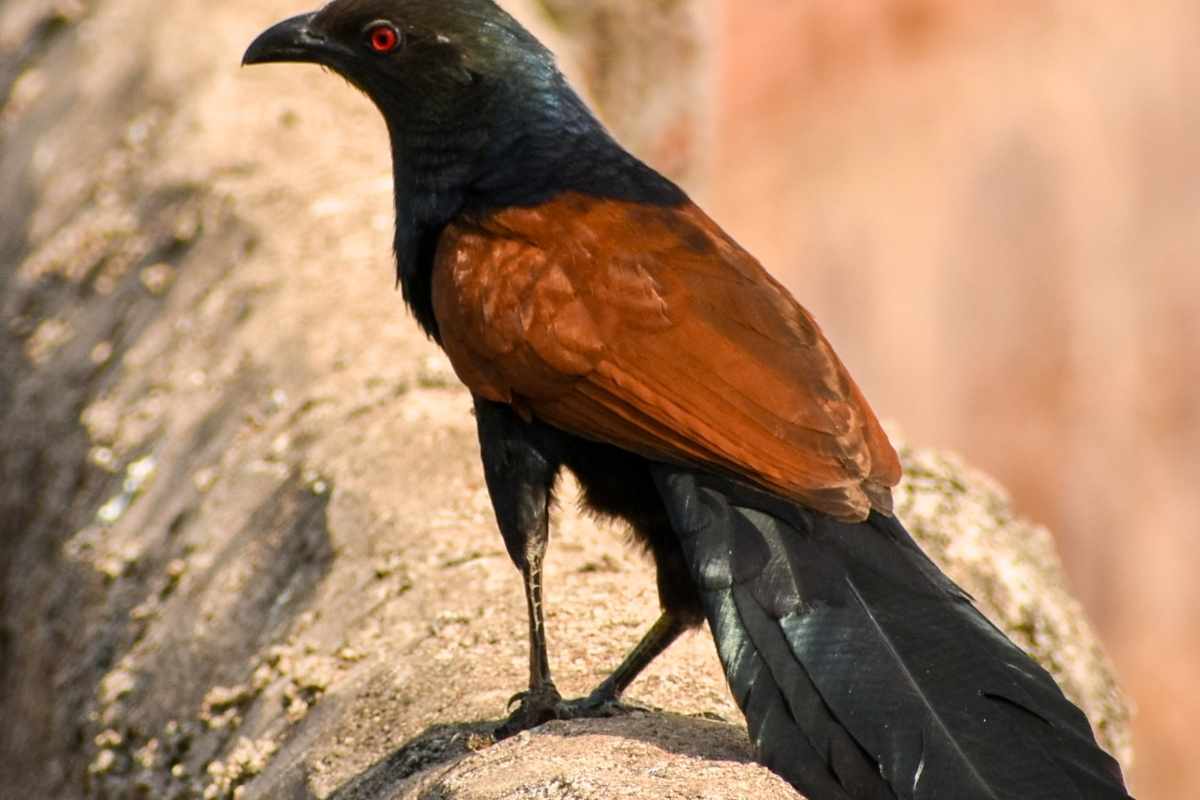 The Greater Coucal, also known as the Crow Pheasant, is a large member of the cuckoo family – measuring up to 19 inches. They are non-migratory birds that can be found across the Indian Subcontinent as well as in the southeastern portion of Asia. While the bird’s head is blackish-purple, its wings are a contrasting chestnut brown.

The Greater Coucal, which has ruby red eyes, forages on insects and small vertebrates, plus fruits and seeds and other bird eggs. 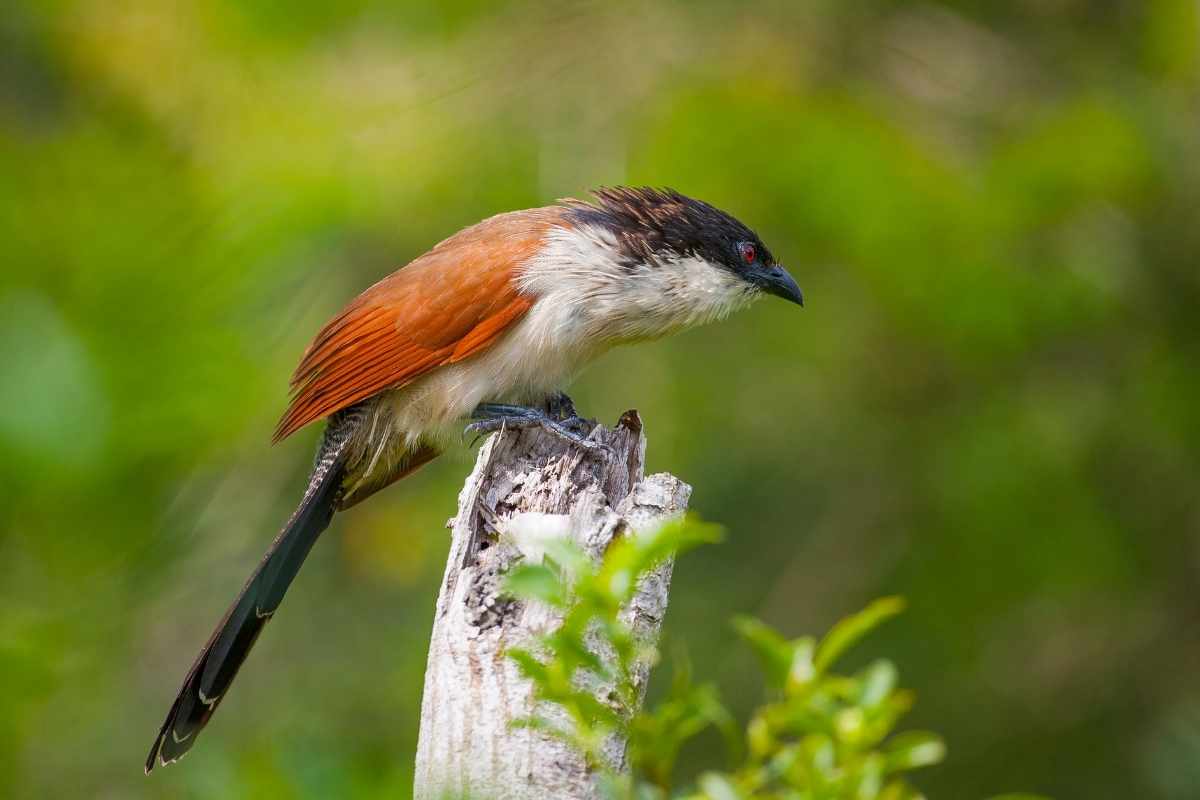 Known also as the Madagascar Coucal, the Malagasy Coucal is a type of cuckoo that is a non-migratory bird from both Madagascar and Aldabra. While its body and robust, long tail are black, its wings are brown. Adult Malagasy Coucals can grow to nearly 20 inches.

The Malagasy Coucal inhabits a variety of environs – from plantations, scrubs, marshes, savannahs, and forests but has been found as high as 5,900 feet above sea level. They prefer to live in thick, dense, and bushy vegetation but may climb as high as the tree’s canopy. They are predators that feast on their prey beneath the undergrowth.

This includes insects, spiders, invertebrates, and even chameleons and rodents. 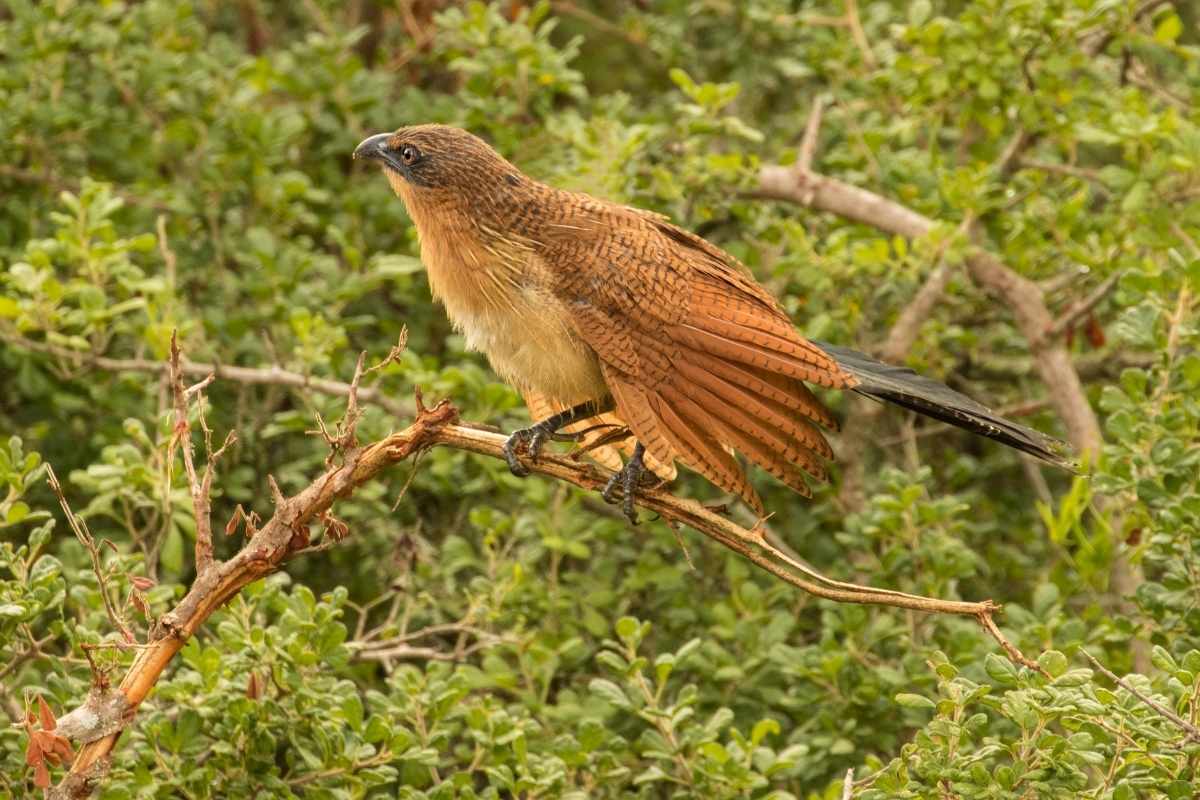 These types of cuckoos inhabit forested areas, the edges of paddy fields, mangroves, thick undercover found in gardens, etc. These birds feed under the bushes, looking to prey on small invertebrates and other small mammals.