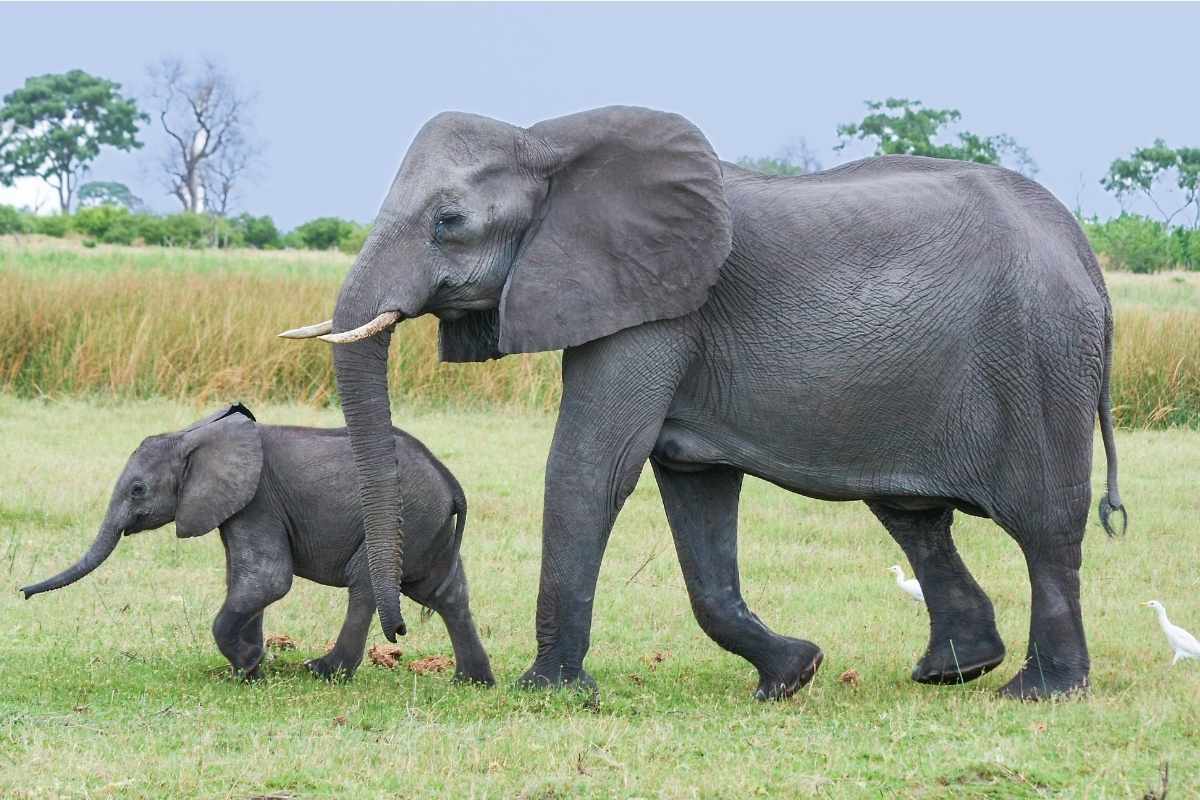 Elephants are one of the easiest animals to recognize on the planet with their big bodies and prehensile noses. The large mammal holds the title of the largest land animal currently in existence, although extinct species like the Brontosaurus were far bigger. The biggest examples of elephants can reach over 20,000 pounds (or more than 9,000 kg) and up to 13 feet tall (or just under 4 meters).

They are longer than they are tall, reaching lengths of up to 24 feet without including the extension of their trunk. The three species of elephants give plenty of clues about their place and biome of origin in their names. The African bush elephant, or Loxodonta africana, is commonly found in the savannahs of Africa.

The African forest elephant, or Loxodonta cyclotis,  prefers the heavily wooded areas of Africa. The Asian elephant, Elepha maximus, lives in the southern and eastern portions of Asia. The bush elephants are the largest, and hybrids of bush and forest elephants can thrive.

Asian and African elephants are not known to create successful hybrid offspring. Aside from their massive size, elephants benefit from a larger level of intelligence over many other species. Their memories can last a lifetime, and they can learn to do complex tasks if trained.

Herds form complex social groups, recognize their friends and family, and seem to have a sense of self. Research suggests that they may communicate through sounds as a form of language.

Elephants are mammals, so every elephant begins life as a young baby, called a calf, that drinks milk from its mother. The average wild elephant starts its life in a herd along with its mother. Female elephants might spend the rest of their lives with the herd, but the males will venture off on their own about the time that they become teenagers.

Their herbivore diet consists of nearly any kind of vegetable they can get fit inside their mouth. With large bodies and no hands, they rely on a long proboscis – the fancy word for their trunk – to manipulate objects and bring food and water to their mouths. Because of their large size, the adults rarely have to contend with violence outside of males competing for mates and the threat of human poaching.

Like many other animals, humans have had a profound impact on the trajectory of elephants as a species. The ivory in elephant tusks and other animals was harvested on a massive scale before being banned, and the ever-growing human population has steadily cut into the areas that elephants once roamed. In 2021, the African forest elephant was declared Critically Endangered by the International Union for the Conservation of Nature (IUCN), while the savannah elephant was moved to Endangered.

12 Animals Similar to the Elephant 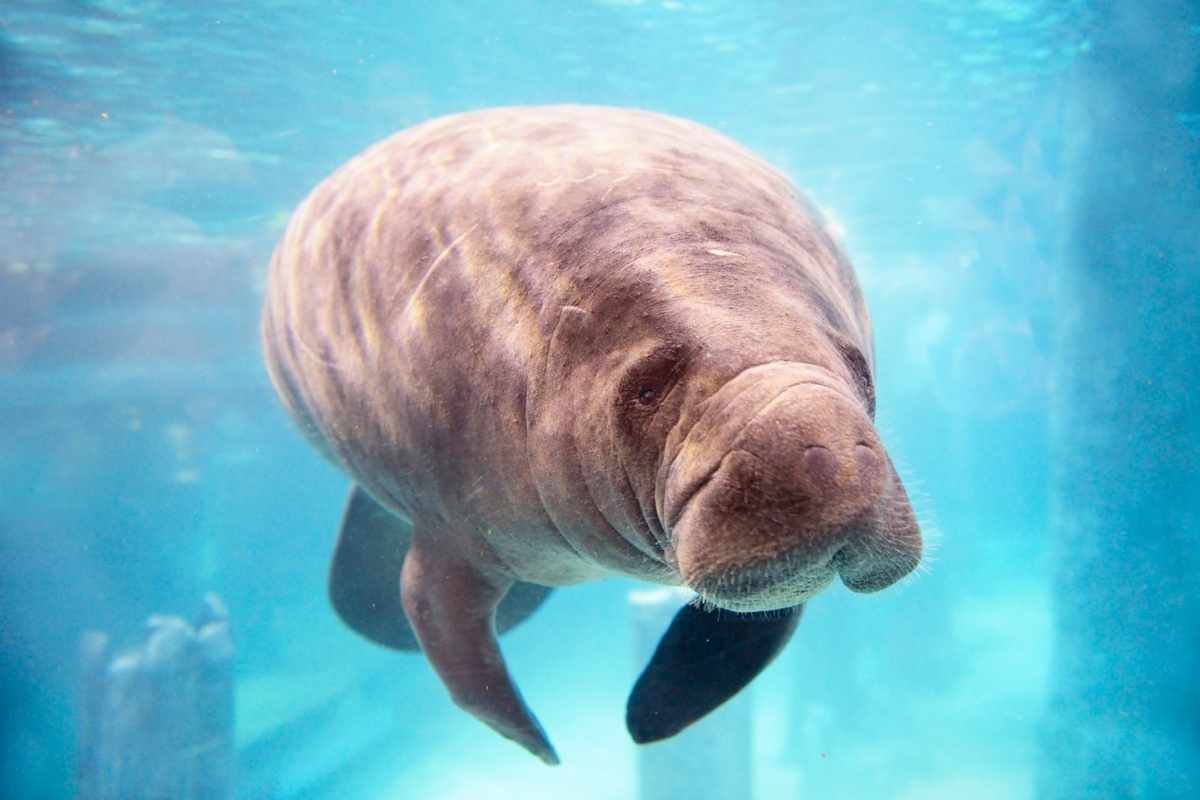 Within the Animal kingdom, few species are as closely related to the elephant as the manatee. It’s a large, cumbersome mammal with a shared ancestor deep in its past.  Despite not having the same reputation for intelligence that dolphins possess, they show a similar capability for learning.

Unlike elephants, manatees live in the water and do not regularly form herds. Occasional groupings may happen, but they tend to split apart except for close family units with young calves. These friendly sea cows exhibit almost no signs of aggressive behavior while they graze on water-based vegetation, and their size leaves adults with no natural predators.

Only three current species with a contested fourth currently exist, but other types of manatees have lived alongside modern humanity. Steller’s sea cow, a 30-foot-long variety of manatee that lived near the Arctic, became the first aquatic mammal in the list of species driven to extinction.

Like manatees, dugongs share a common ancestor with elephants, but their evolutionary path diverged to the water instead of ponderously thudding across the land. Some of that shared background is more visible in the vaguely trunk-like extension of the dugong’s nose that helps it snuff out food while grazing along the floor of shallow waters along the eastern coast of Africa, southern coast of Asia, the northern coast of Australia, and islands found between them. Beyond the snout, the easiest way to tell a dugong from the manatee is the tail.

A manatee’s tail looks like a broad leaf, while the dugong’s tail fans out to two sides like the tail of a dolphin. 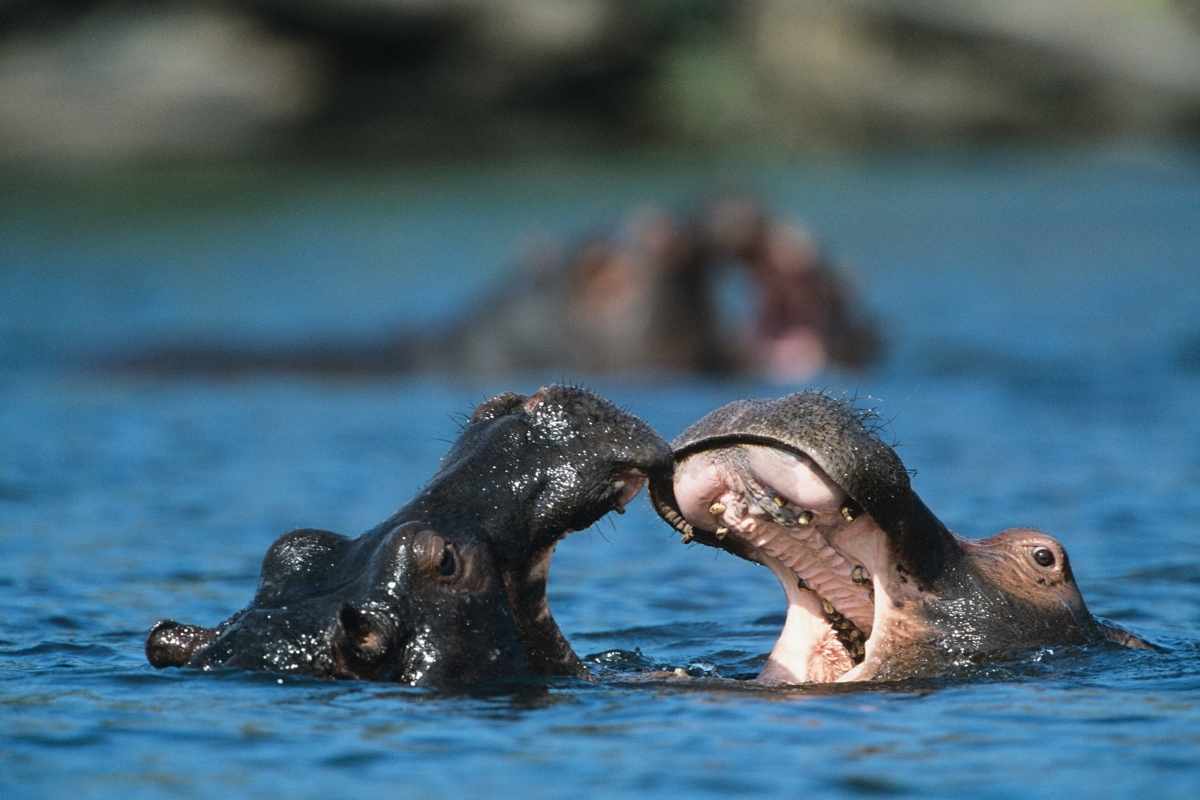 The hippopotamus is another large land mammal like the elephant, with only two existing species. Their habitat is limited to parts of Africa with enough water for them to fully submerge for the majority of the day. They hang out together in the water and on the beach, but each will go find its own places to graze on vegetation throughout the day.

When they need to send a message, their communications can go through both the air and water for dual-channel connectivity. With the strange paths that evolution takes, whales and dolphins are closer relatives to the hippo than the elephant. Their tempers are notably shorter than elephants, just like their bodies.

See also  Should I Let A Possum Live Under My House?

Despite a potentially feisty demeanor, their love of food and some intelligence make it possible for some hippos to be trained while in captivity at a zoo or other proper facility. 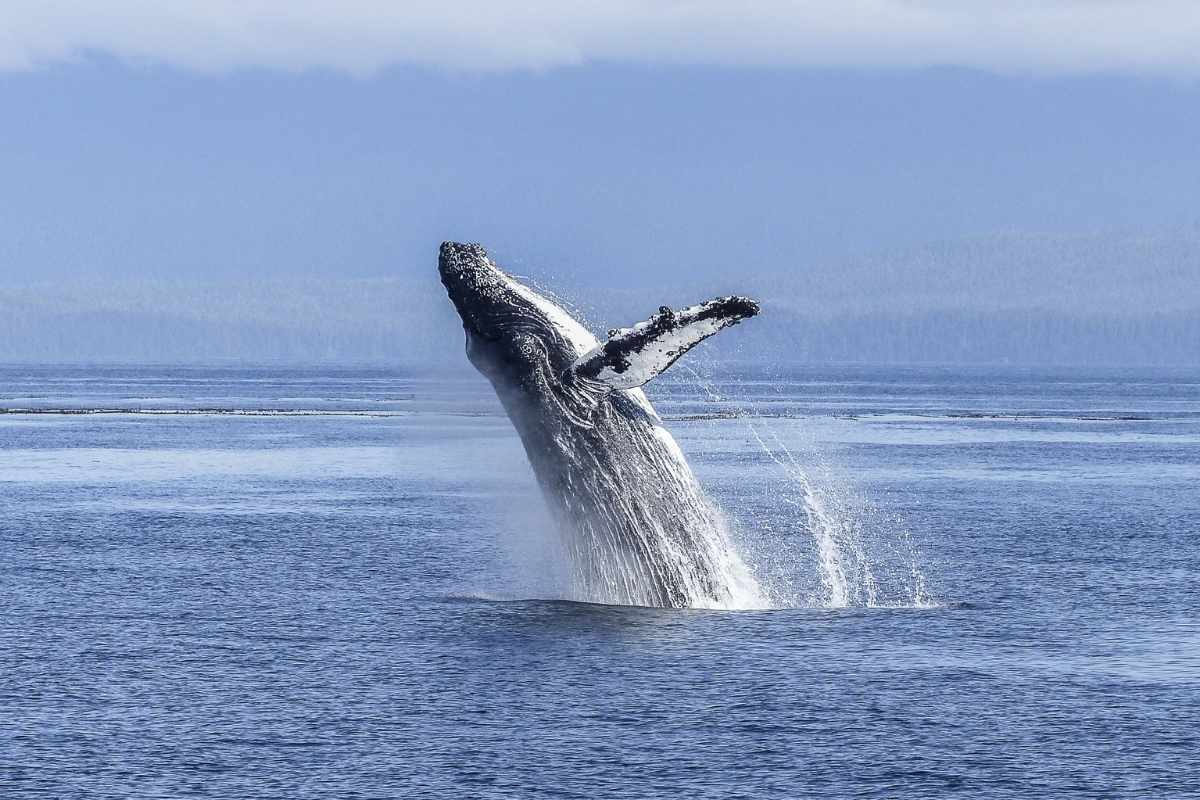 Whales are even larger than elephants, but their blubbery bodies move through the oceans instead of across land. A much larger number of whale species exist than elephants, so there is more variety when taking a close look at specific varieties. The Blue Whale is the largest animal known to exist on Earth, weighing more than 16 elephants combined at their maximum.

They aren’t vegetarians like the elephant, but they do show signs of intelligence and form social groups called pods that can be a lifelong bond. The surrounding water and a sensitive nose allow them to detect underwater objects and send messages across vast distances. Both whales and elephants have been targeted by hunters for their body parts.

Because whales aren’t competing directly with humans for space, they have been able to recover some of their population after bans on hunting them. Slow reproduction rates means that conservation efforts will have to continue for some time to have a more notable impact. 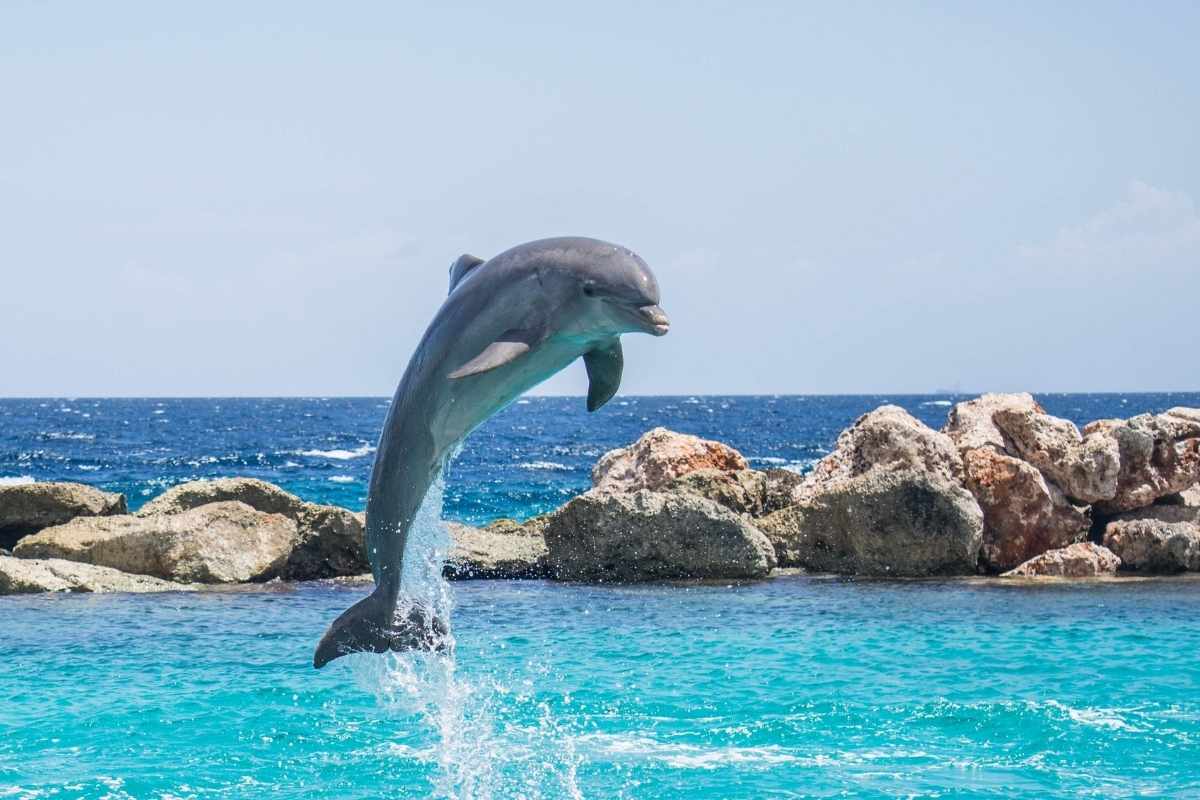 Dolphins are aquatic mammals, like whales, although they are typically much smaller. While colloquially called the “killer whale”, the orca is actually a member of the Delphinidae family with other oceanic dolphins. Known for their playfulness, dolphins are both smart and social.

Their love for enrichment and ability to use tools may cause some to use toxic fish as drugs. They respond well to training in captivity, but they also exhibit signs of depression that gives some cause for concern about the ethics of such programs. Dolphins, even the orcas, have not undergone quite the same level of industrial hunting as other species, but they were killed to reduce competition for fish and when needed for food.

Many dolphin species are now endangered as a consequence. 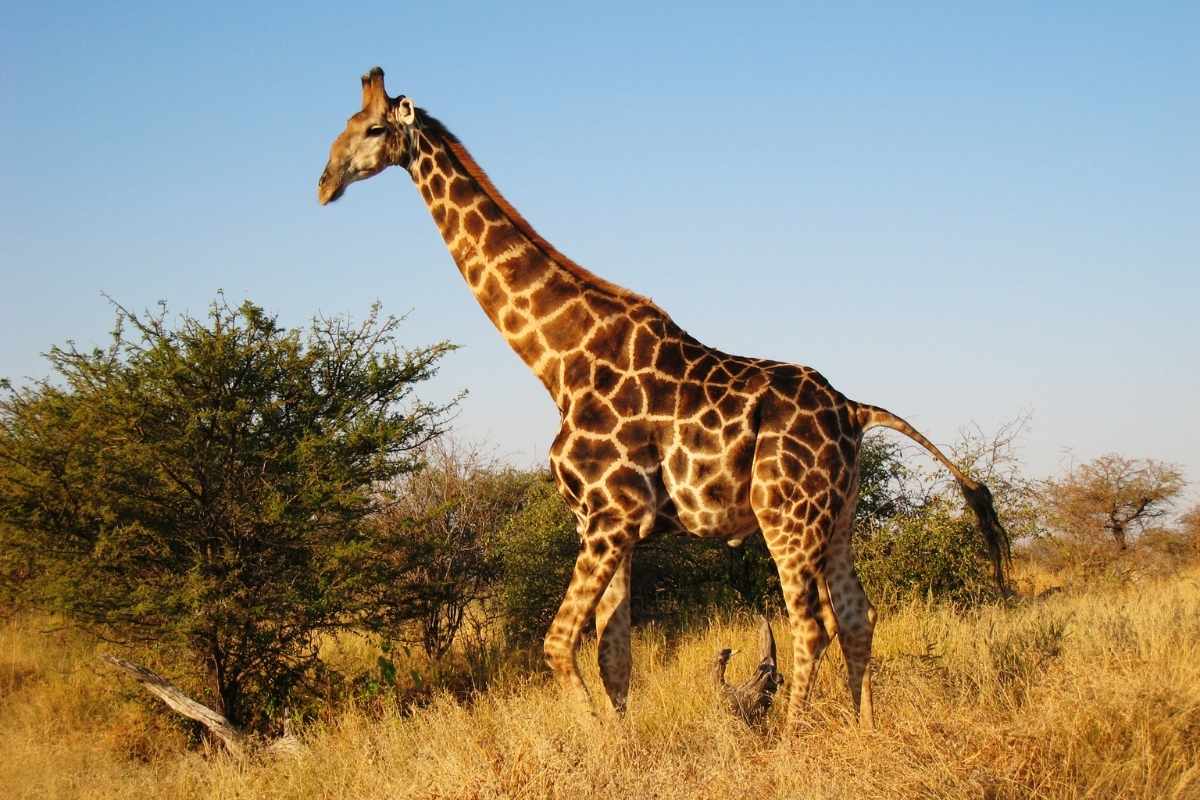 Giraffes share a home with the African bush elephants, roaming the large swathes of land on the savannahs. Largely because of their extensive necks, they are the tallest land animal with heights of nearly 20 feet or 6 meters. The herbivores munch on tall leaves that few other animals can reach.

Their social structure is similar to elephants, though the herds of typically related females are much smaller than the largest elephant groups. Size is again a major deterrent to predatory behavior from other animals on the savannah, but the young and weak will occasionally become prey to lions and hyenas. 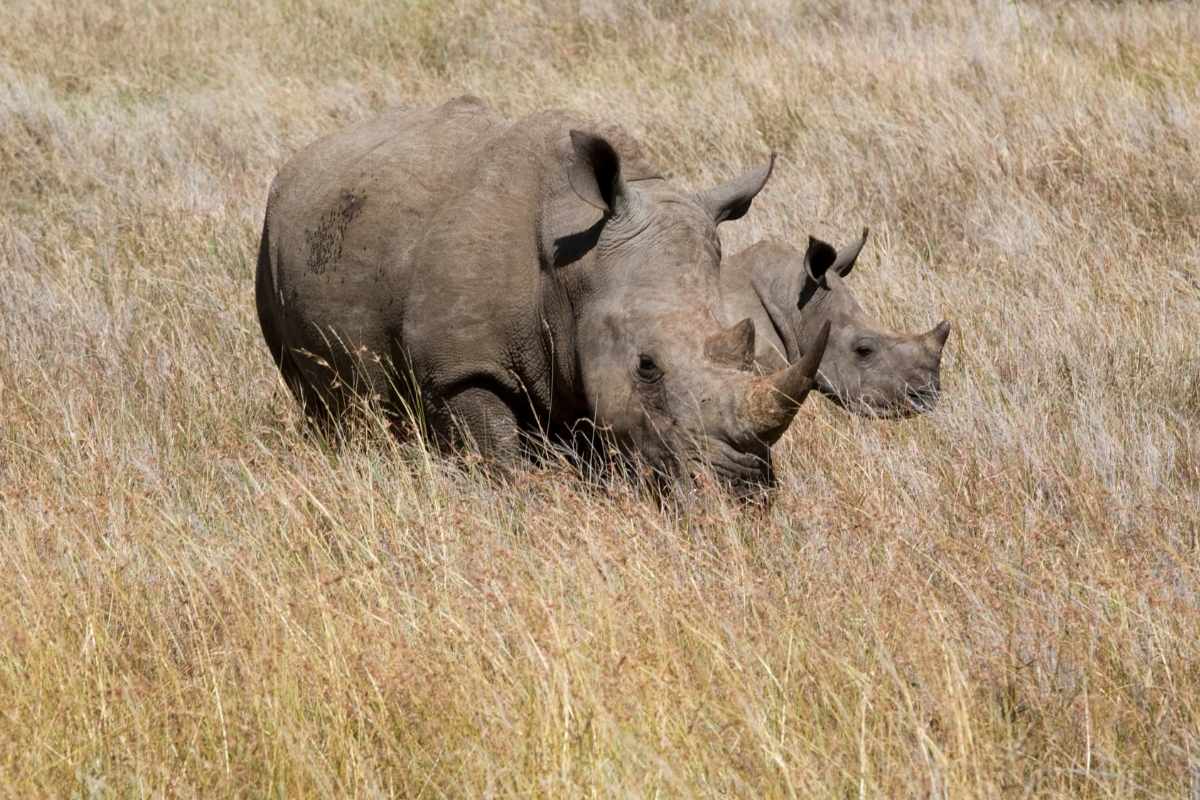 Rhinos have been lovingly described as “tank puppies”. Although they are much bigger than the hippo, their attitude is more docile unless pushed to defend themselves or their family. The chunky mammals weigh up to a ton and feature a pair of horns that can reach over three feet in length.

A full ton of mass in the largest rhinos is fueled by a steady supply of grass and foliage. Although they are fairly calm, white rhinos are the only rhino to commonly stay in a herd. Others prefer to stay by themselves when not getting together for mating and raising very young calves.

Many species of rhino are considered threatened by the IUCN, The white rhino is lucky enough to only be nearly threatened, but the black, Sumatran, and Javan rhinos are all critically threatened, 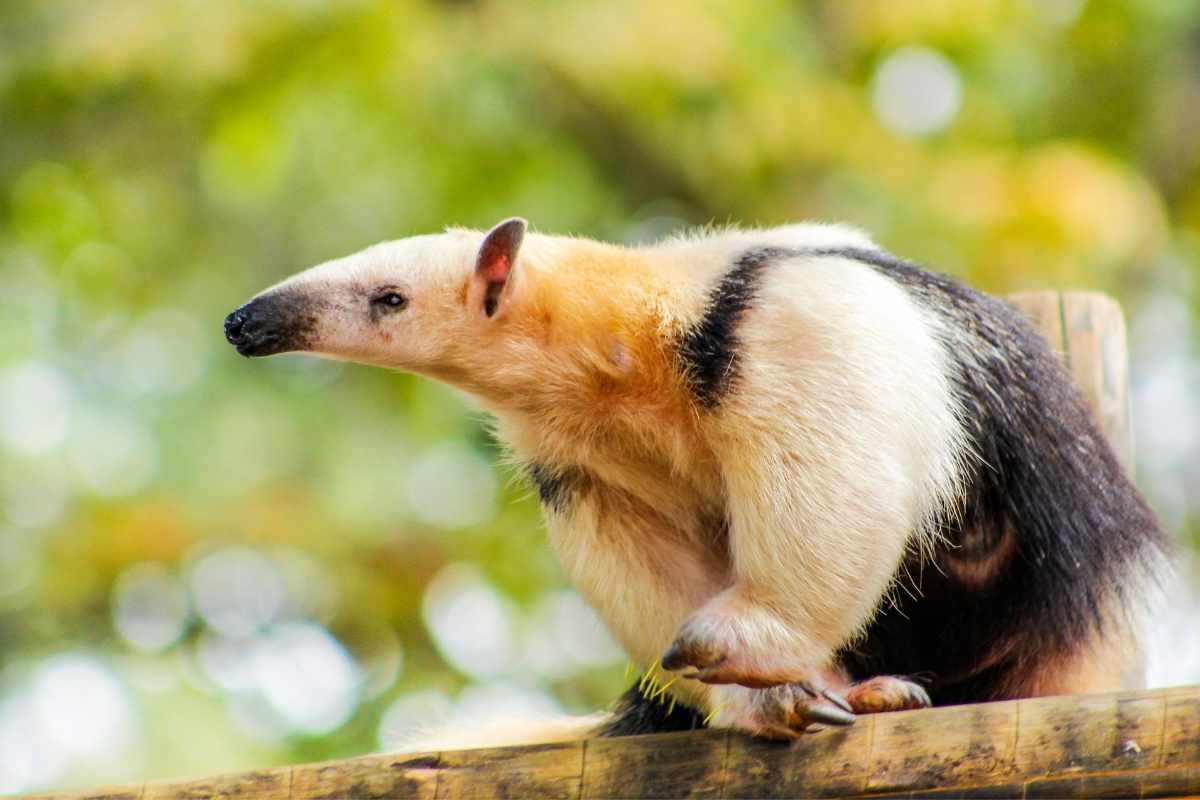 Anteaters combine a trunk that’s relatively long for their body with an agile tongue to pull insect snacks out of hiding spots. Even the largest species of anteater is much smaller than an elephant, though a giant anteater can be bigger than a large adult human. While they also can live in grasslands or forests depending on the species, they primarily live in Central and South America.

They don’t like other anteaters very much, typically sticking to themselves within the bounds of their foraging territory. The boys will occasionally venture into female territory, but they otherwise prefer solitary grazing.

The walrus is a beefy marine mammal with straight-toothed tusks and a body covered in thick fat to keep out the chill from the cold waters of the Arctic ocean and surrounding areas. Their long tusks are used more for fighting and flexing, but the walrus is a carnivore that has a penchant for clams and other mollusks. It drags its tusks along the surface while feeling for food with its more sensitive snout.

Walruses are extremely social and rarely seen alone outside of grazing. Vast stretches of frozen coast and ice floes can be covered by hundreds of the husky sea mammals. Having both prominent tusks and plump bodies full of blubber created a high demand for walrus products, but subsequent conservation efforts have the species listed as Vulnerable as of 2016. 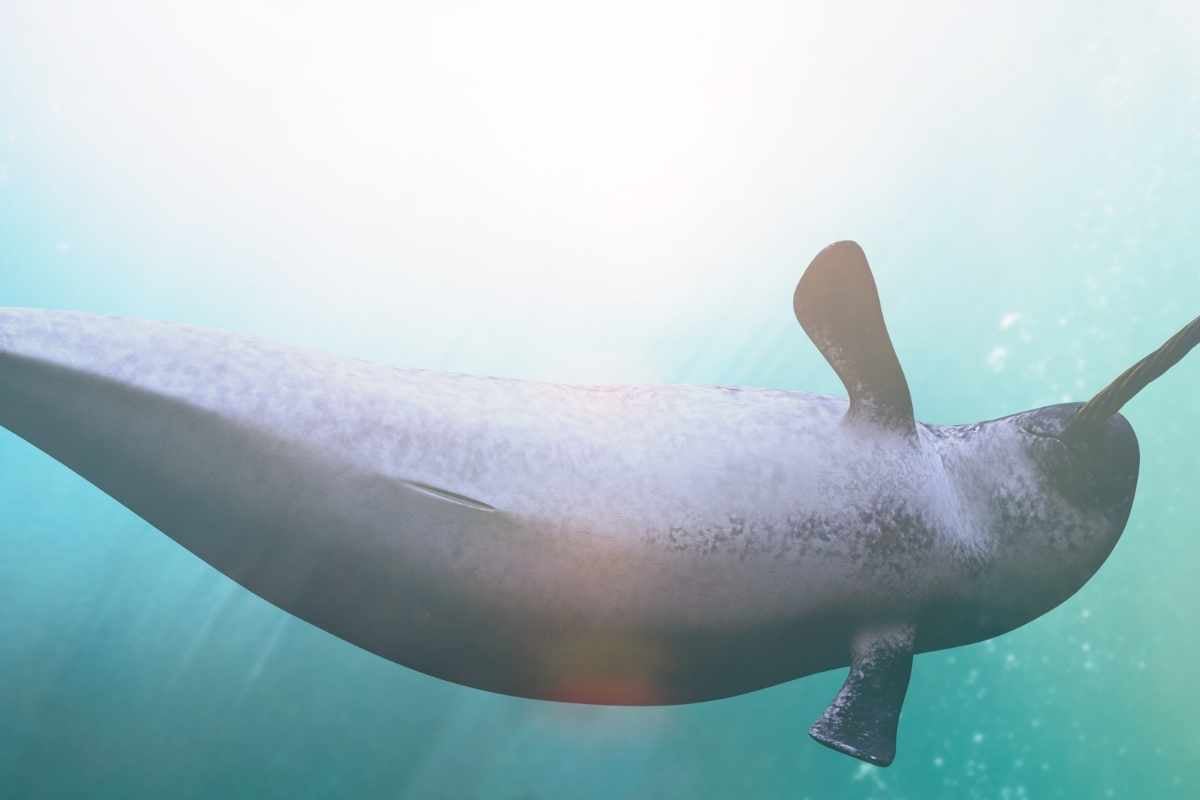 The unicorn of the sea features a massive horn coming out of its head. That horn is actually a tusk, like the ones on many elephants, except it’s also an extremely sensitive touch sensor on top of its beautiful spiral design. They do sometimes use the tusk to hunt around the waters of the Arctic circle, though it has rarely been observed.

Like many other underwater mammals, narwhals form pods ranging from a few members to multiple dozens, and they sometimes link together on longer journeys. Their beautiful tusks and blubber have made them popular targets for hunters on the sea, but most countries have banned narwhal hunting beyond limited indigenous subsistence. 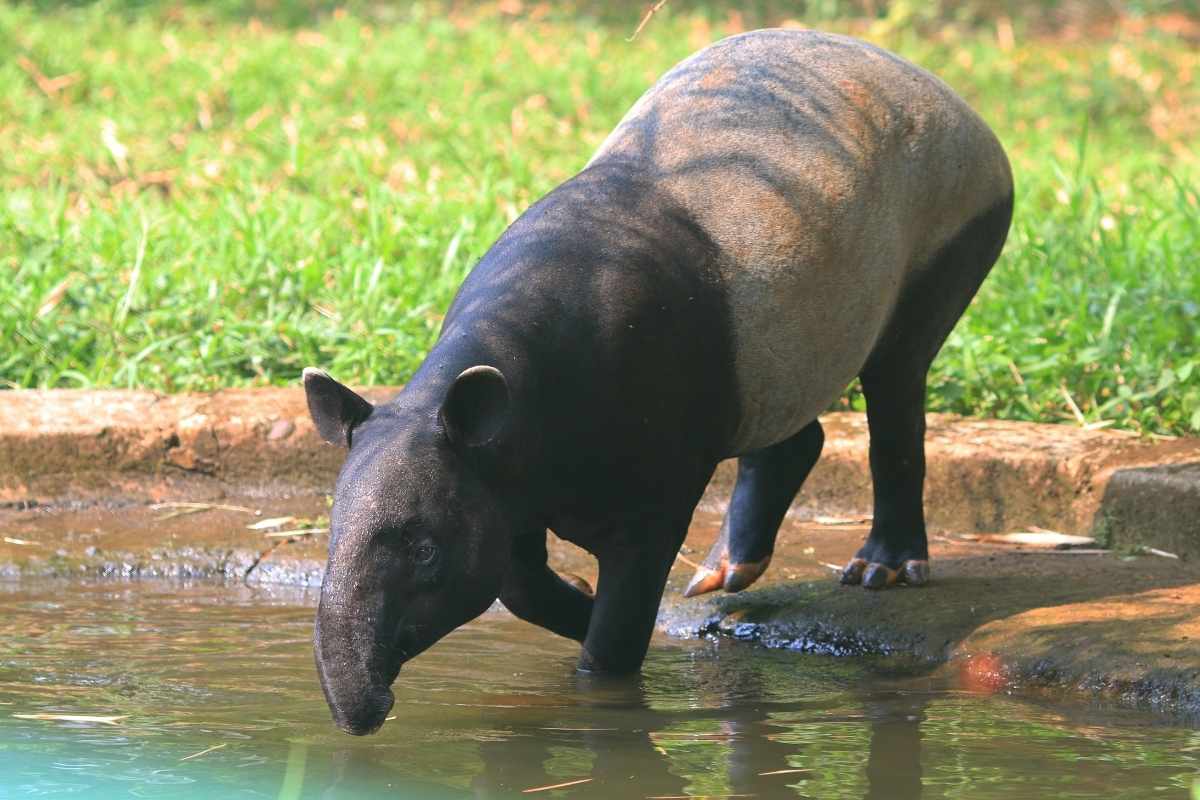 Tapirs look a bit like someone took an elephant and a hippo, mashed them together, then shrunk them down. As members of the Perissodactyla order, they are more closely related to rhinoceroses and zebras. At about six feet in length and weighing 350 to 700 pounds, they are less than 1/20th the size of an elephant.

Social life for a tapir isn’t nearly as complex as an elephant’s, but tapirs do congregate together in groups called candles. Their trunk is not exceptionally long, but it is prehensile and helps them munch on leaves, fruits, berries, and twigs instead of floor-based foliage. Most tapirs come from South America, but the Malayan Tapir is native to the Malay Peninsula that hosts countries like Thailand and Malaysia.

The South American Tapir is currently considered vulnerable by the IUCN, while the other three species are endangered. 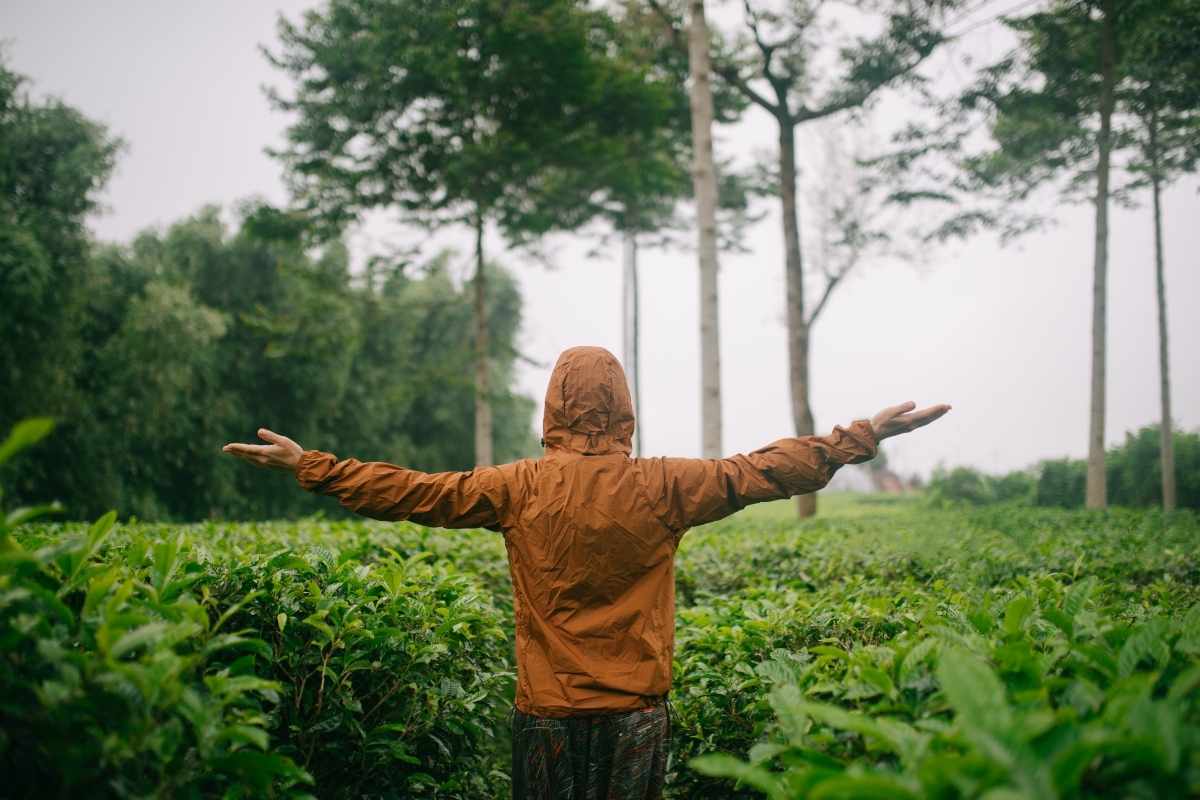 We humans have several traits in common with elephants. While our size is much smaller, both humans and elephants are intelligent creatures that rely on social groups to thrive. Our average life expectancy is similar, we communicate with our friends and families, and we form memories and bonds that can last a lifetime.

As a species, our understanding of the world and ability to control it is far beyond the elephant’s and every other species on this list. That’s why it’s up to us to learn everything we can about our friends on this planet and build a world we can share.