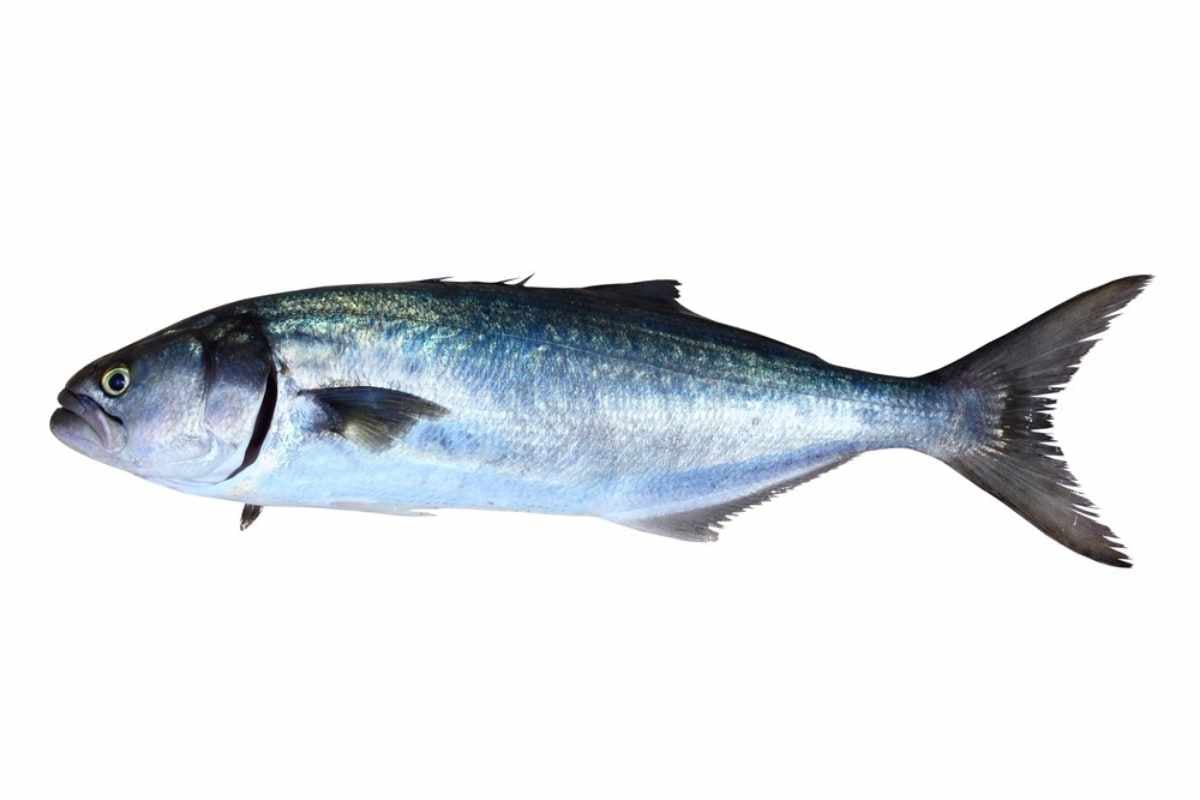 The bluefish has a long, blue-green body with a light-colored belly. The bluish-green coloring, which fades to white along the sides, is one reason that they are often mistaken for other fish. There are several other features of bluefish that are similar to the features of other fish.

The shape of the fins, where they are found, and their habits are examples of features that will likely lead some people to mistake certain similar fish for bluefish. Bluefish have several nicknames, and some people say that anglers have the ability to “sniff out” the bluefish. What other fish are similar to bluefish?

What features of other fish are comparable to those of the bluefish? How did they get their nicknames?

Bluefish live throughout the world, living in the tropical and temperate waters of the oceans. They are a common fish in the Atlantic Ocean. You also find them in the Indian Ocean and the South Pacific.

Their habitat extends to the Mediterranean Sea and the Black Sea. The size of bluefish varies, according to their specific habitat. Bluefish off the Atlantic Coast in the U.S. are much larger than bluefish caught in waters off the Gulf coast.

Bluefish caught off the Gulf coast typically weigh around three pounds. Bluefish along the Atlantic coast weigh up to 27 pounds. Bluefish travel in large schools, similar to some other fish.

They have a voracious appetite. Take Me Fishing explains that they swim through the shoals of baitfish, “slashing and destroying” everything in their path. No wonder the bluefish has the nickname of “marine piranha.”

The fact that bluefish have the nickname of the marine piranha is not only because they slash and destroy other fish for a tasty meal. The fish bites swimmers and bites anglers, and has the capability to cause a serious wound. The bluefish is the only member of the family Pomatomidae, yet there are several fish that are sometimes mistaken for bluefish.

There are several features that help to distinguish greater amberjacks from bluefish. The bluefish has a telltale black spot or blotch at the base of the pectoral fins. Amberjacks do not have this feature.

Most greater amberjacks weigh in at about 40 pounds. 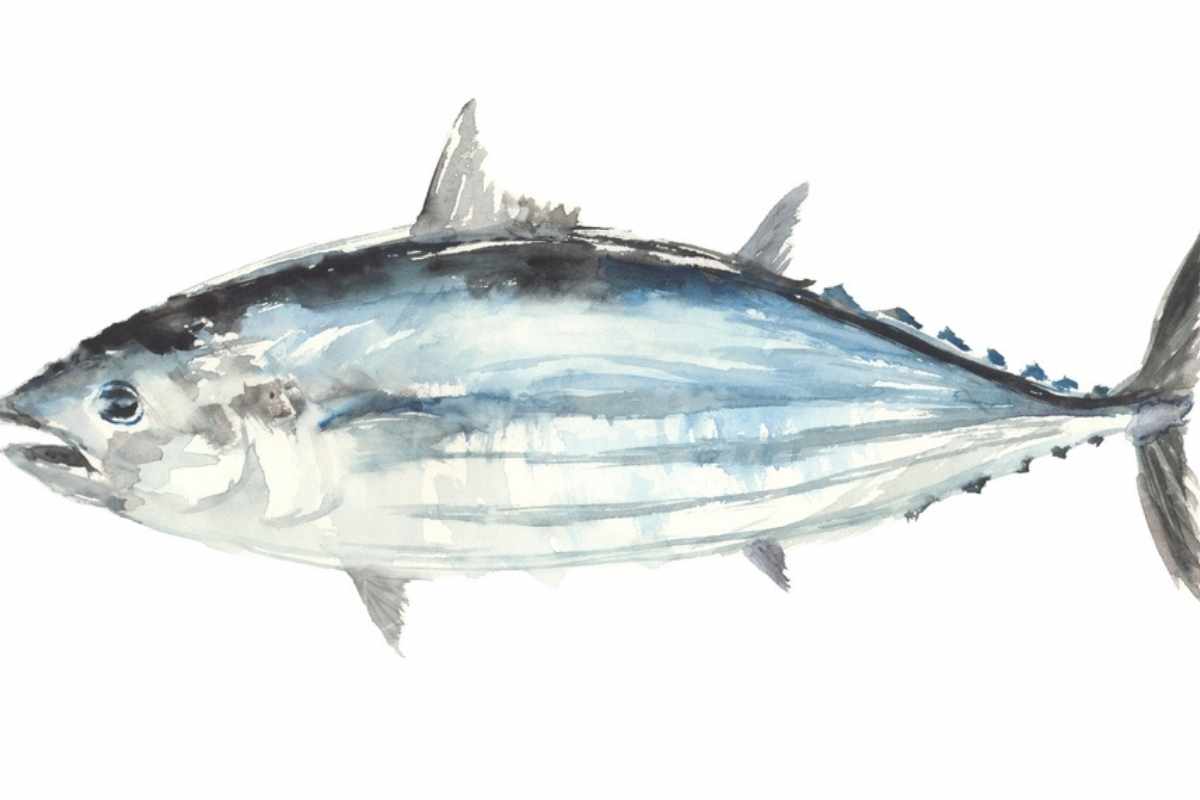 The bonito has similar coloring to that of bluefish. It has a streamlined, bluish-colored body that fades to silvery-colored sides and underbelly. Their habitat is the worldwide oceans, and near where they find kelp accumulations.

It is a schooling fish like the bluefish, and enjoys a similar diet. Several features distinguish the bonito from the bluefish. Bonito fish have several stripes on their backs, while bluefish have a black spot on their bodies. 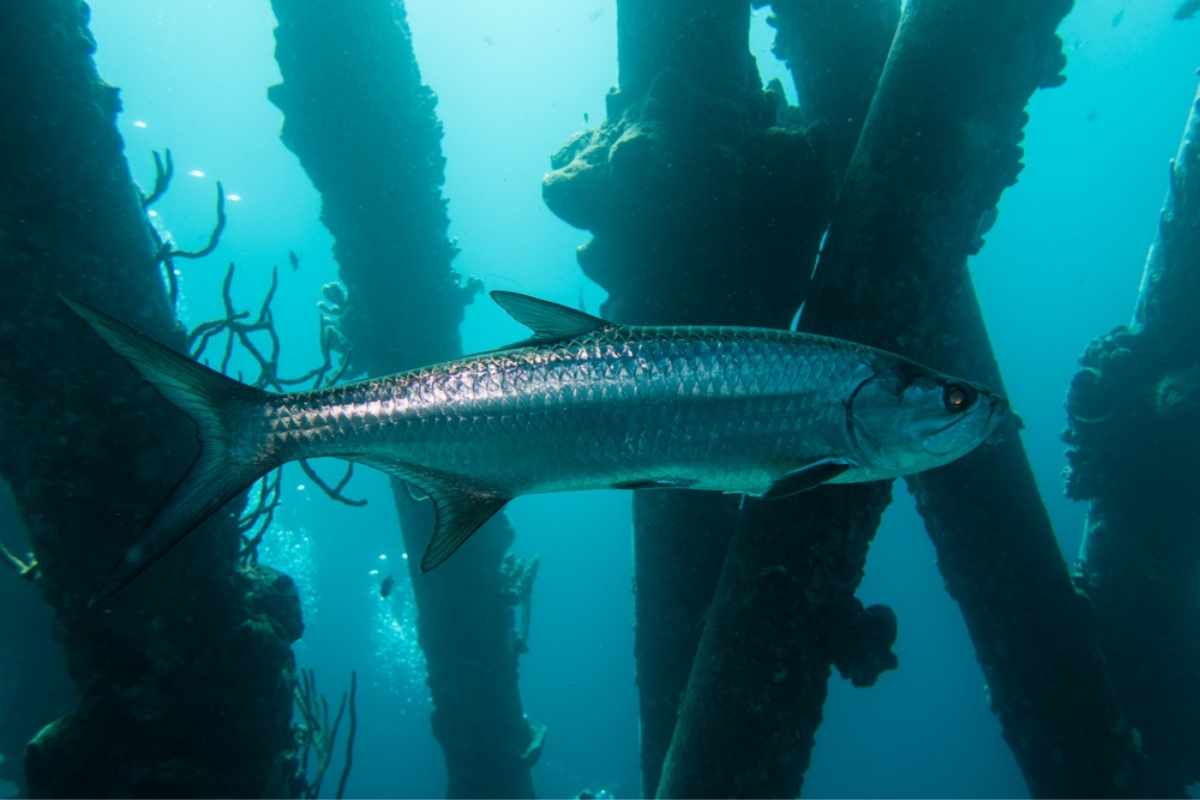 Tarpon fish are silver and have either a greenish gray or bluish gray back. It is a versatile fish, living mostly in the oceans. You can find it in freshwater rivers and in marshes.

The ancient fish, whose first-known existence dates back to the Cretaceous Period, existed 113 million years ago. Features that distinguish it from bluefish include the fact that it sometimes weighs in at 100 or more pounds, and has the nickname “silver king” for its large silvery scales on the side of the body. 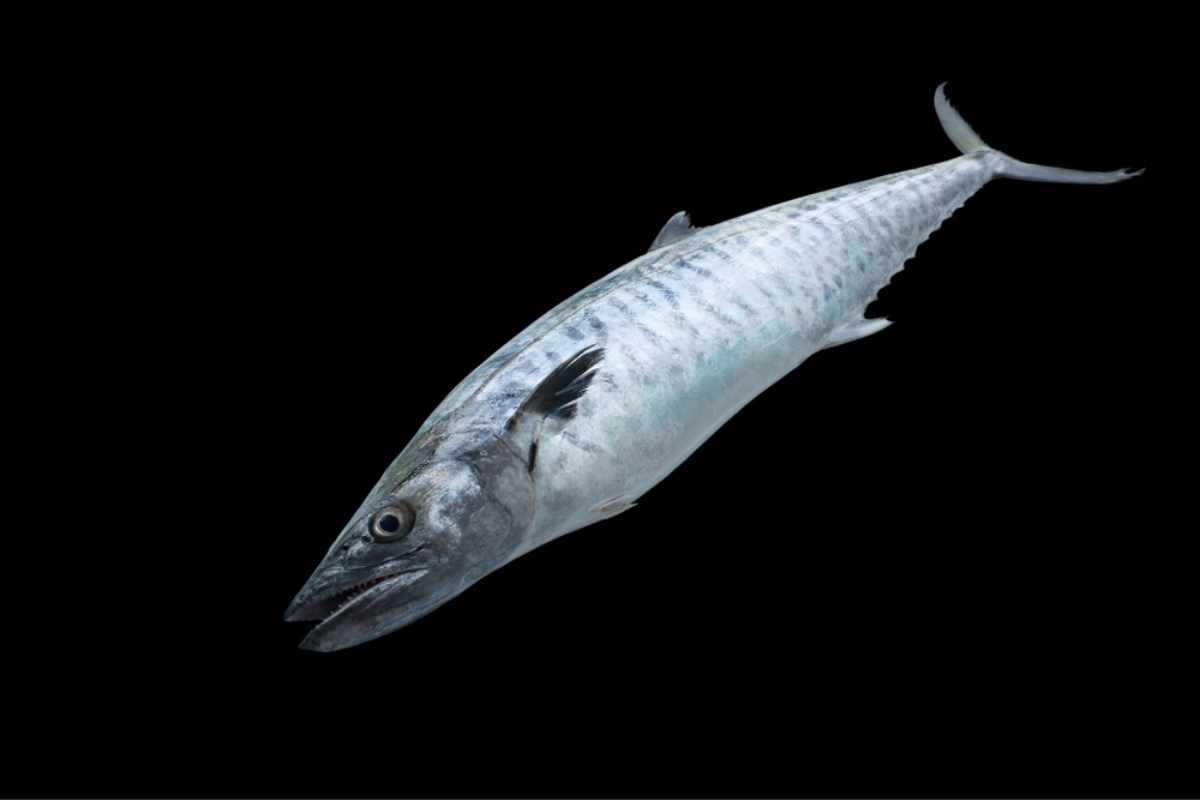 King mackerel have a blue-green or blue-grey body. The bluish-green coloring fades into silvery sides and belly, similar to the fading of the coloring on the body of the bluefish. The king mackerel reaches a weight of seven pounds to 25 pounds.

Bluefish reach a weight of three pounds to more than 25 pounds. The king mackerel’s habitat is similar to that of bluefish. They both live in the Gulf waters and the Atlantic Ocean. 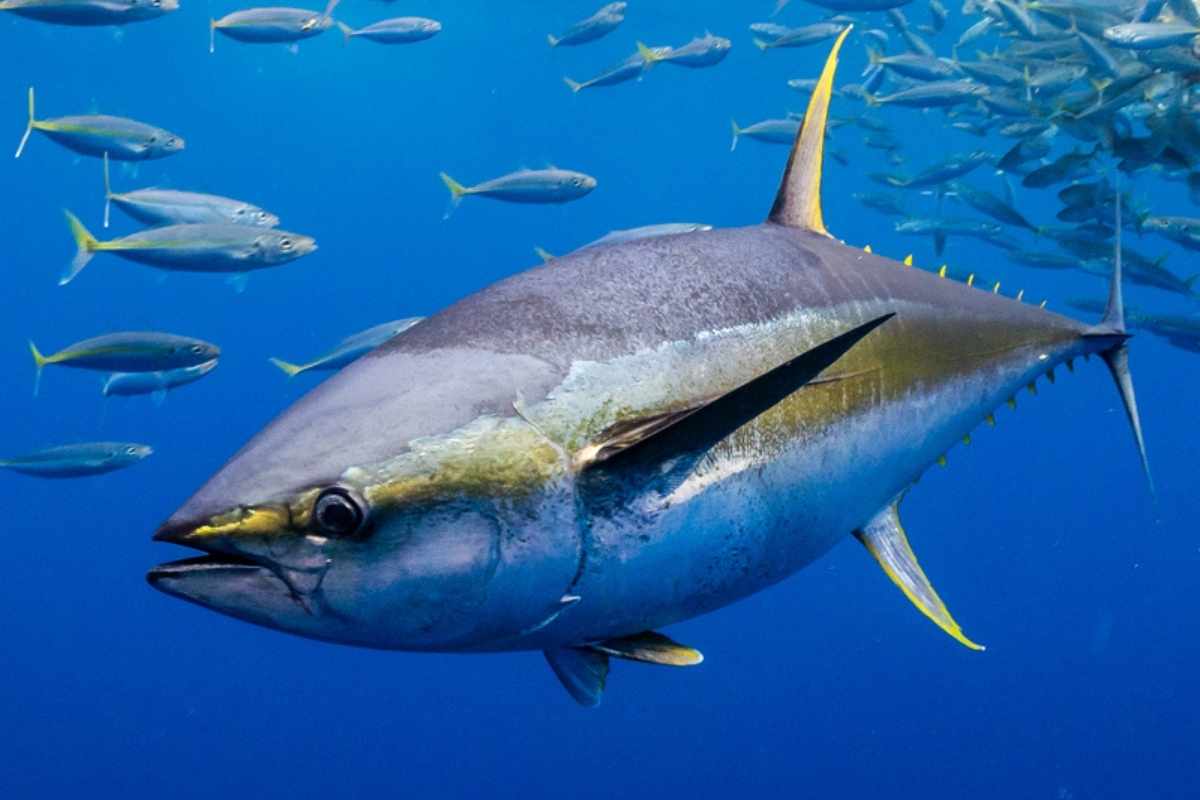 Yellowfin tuna have a streamlined blue body similar to the body of bluefish. The belly of yellowfin tuna ranges from a yellowish color to a silvery color. The yellowfin tuna and bluefish have similar preferences for their diet.

They feed on smaller fish, squid, and other ocean creatures, such as crustaceans. There is one difference between yellowfin tuna, which is the fact that there is a Pacific Yellowfin Tuna and the Atlantic Yellowfin Tuna. There is no such distinction between bluefish.

Yellowfin tuna have a slenderer body compared to the bluefin tuna. They have yellow fins and a yellow stripe down the side of their body. Another difference between yellowfin tuna and bluefish is their size.

Yellowfin tuna reach a weight of up to 400 pounds. They also have a short lifespan, which averages around seven years. 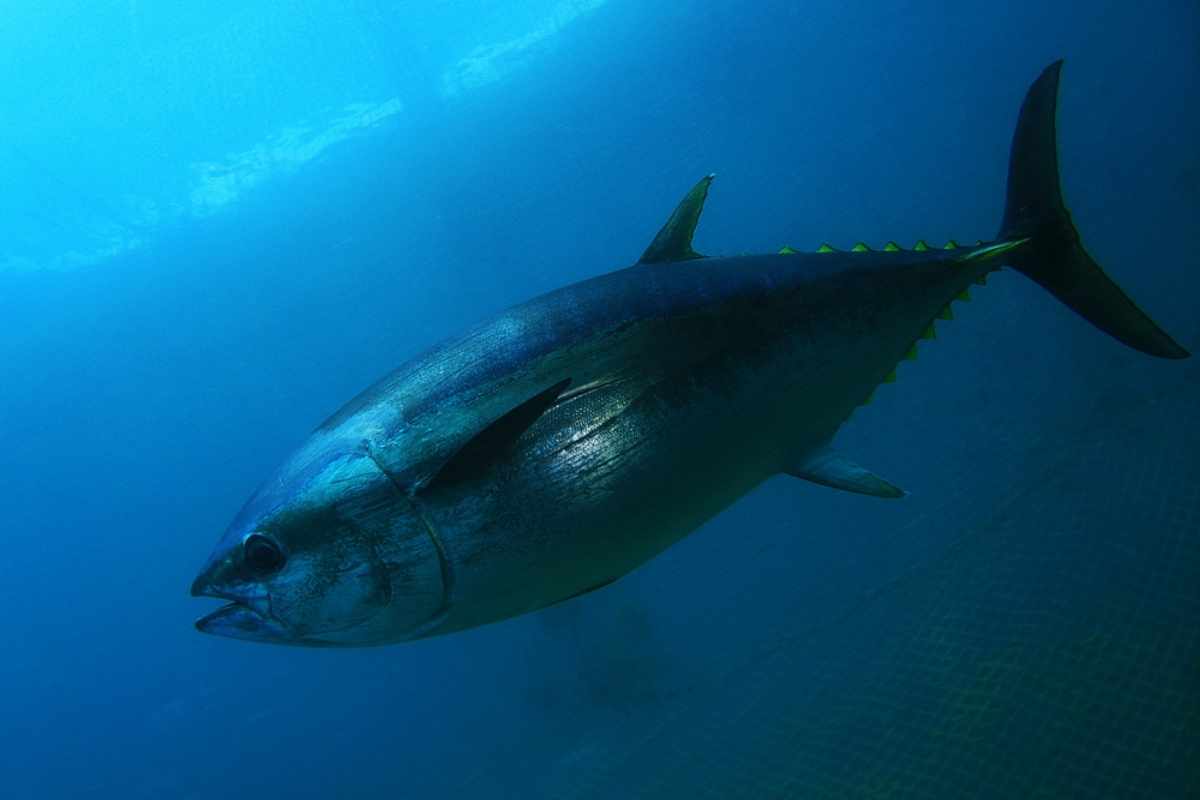 Bluefin tuna are the largest of the tunas. They live up to 40 years in their ocean habitat. The Atlantic Bluefin Tuna also finds its way into the Mediterranean Sea, a habitat similar to bluefish.

The bluefin tuna is dark blue on the top of its body. The underbelly has silvery white coloring similar to that of the bluefish. They also have sharp teeth like the bluefish.

Bluefin tuna differ from bluefish because of their size. They reach lengths of up to 10 feet or more, and can weigh more than 1,000 pounds. They have a designation as an endangered species.

Overfishing primarily contributes to the decrease in bluefin tuna. American Oceans points out that several people find themselves under arrest every year because they do not follow the proper regulations when they fish for bluefin tuna. 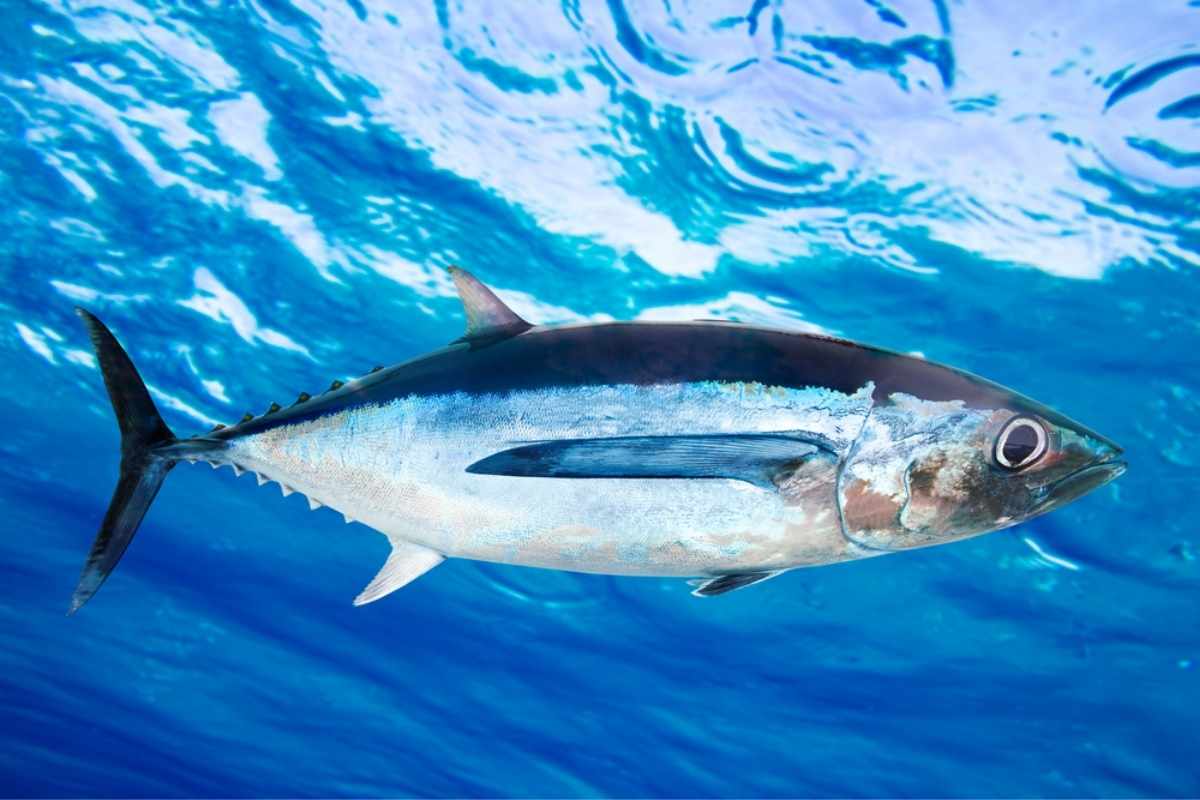 Albacore tuna is another type of tuna that looks similar to bluefish. They have a streamlined blue body. The bluish color of the albacore tuna fades to silvery sides and belly, similar to the bluefish.

The tail fin has a white edge. The fish has long pectoral fins, which are about half the size of its body. Albacore tuna does not grow as large as some other tuna, which is another reason that some people are likely to mistake it for a bluefish.

Bluefish may weigh around 15 pounds, while some weigh in at more than 20 pounds. Albacore tuna often have a similar weight to the bluefish of around 25 pounds. The difference is that the albacore sometimes weighs as much as 45 pounds or more. 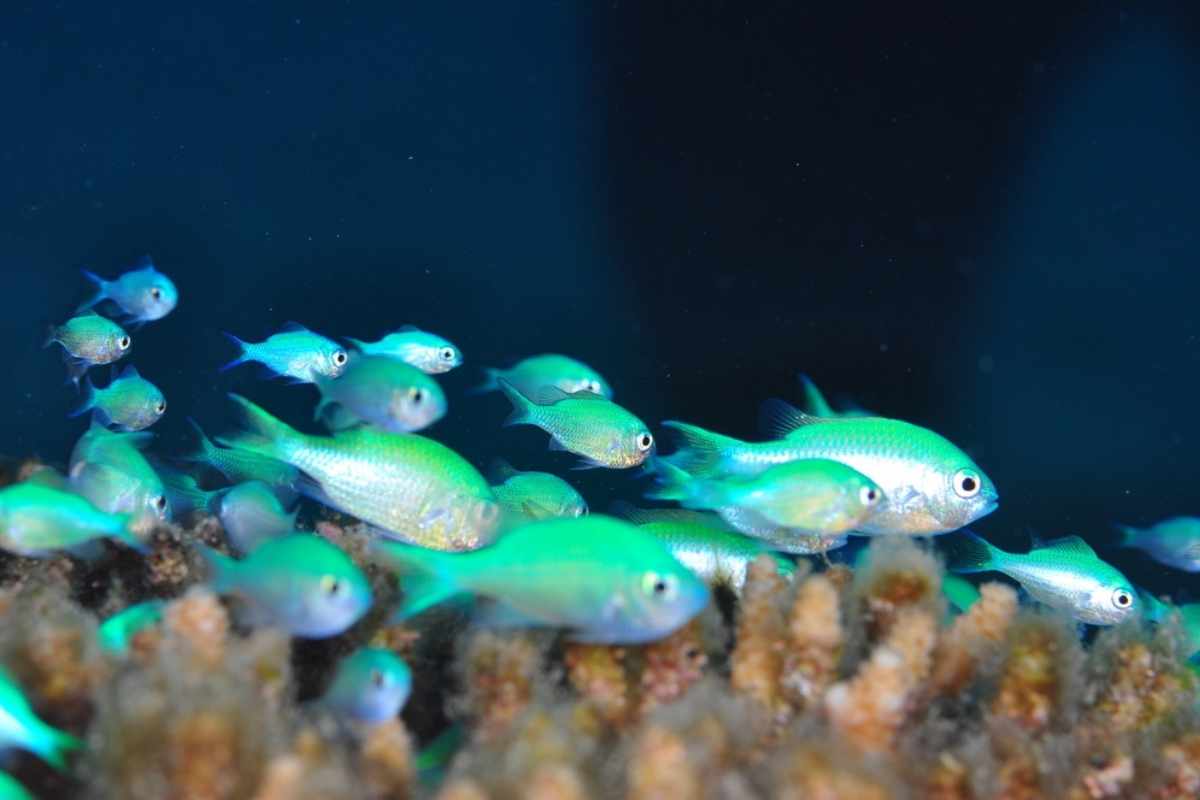 The green chromis is also known as the blue green chromis. It is an omnivore, meaning that it eats food of both plant and animal origin. Green chromis fish swim in shoals, similar to the bluefish swimming in large schools.

Their habitat is usually in the Indo-pacific region. Blue green chromis are sometimes mistaken for smaller, younger bluefish. The difference in size as adults makes them unmistakable, since the average length of the blue-green chromis is only about four inches.

The social fish often end up in aquariums, with recommendations to have at least six green chromis in an aquarium. 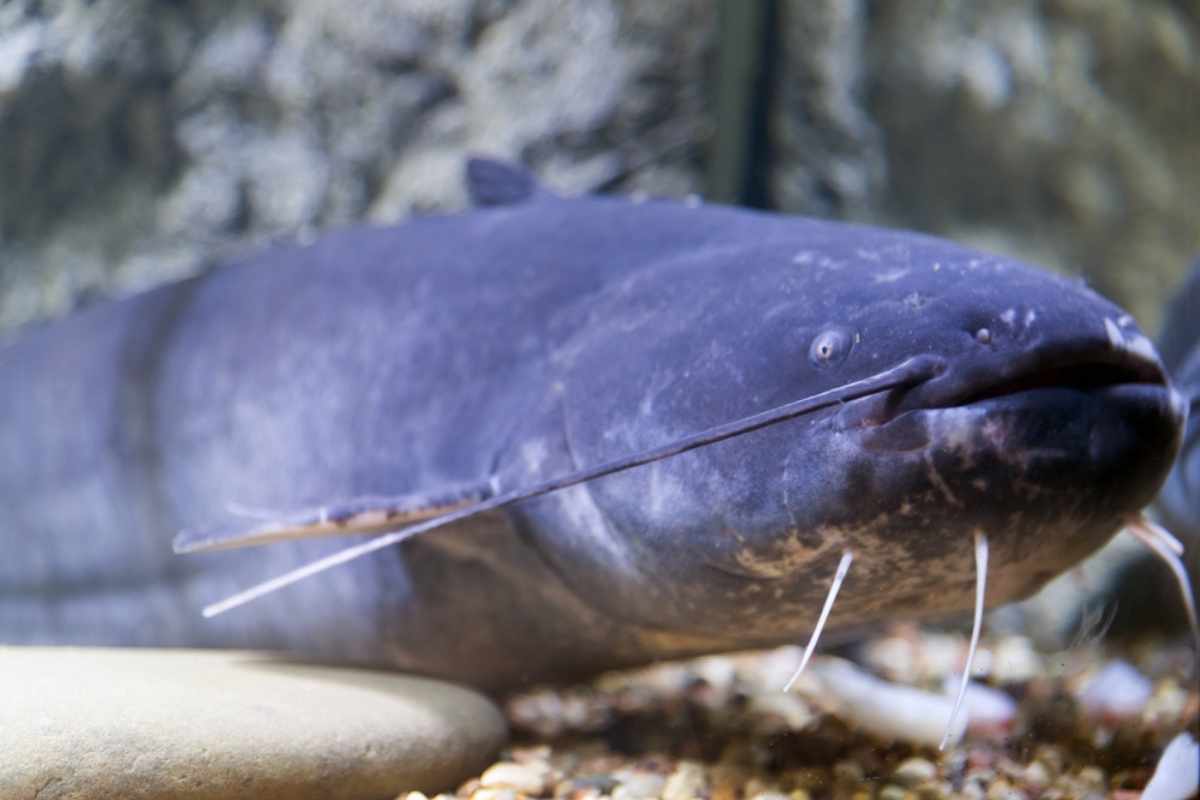 Blue catfish have a bluish-grey upper body, which fades to white on the sides and the belly, like the coloring of bluefish. They do not have spots like some other catfish, which is a reason that some people are likely to mistake a swimming blue catfish for a bluefish. The most notable difference, of course, is the whiskers of blue catfish, a feature that is not a feature of bluefish.

The blue catfish is often found in the coastal and inland waters of several states. Some areas where you can find blue catfish include the Rio Grande River Basin, the Ohio, Mississippi, and Missouri river basins. Several states stock them for fishing purposes.

The smooth skin of the blue catfish is similar to a bluefish, which only has small scales. The fish prefers large rivers that have a sandy bottom, deep channels and swift currents. Compare this habitat to bluefish, which prefer to live in the oceans. 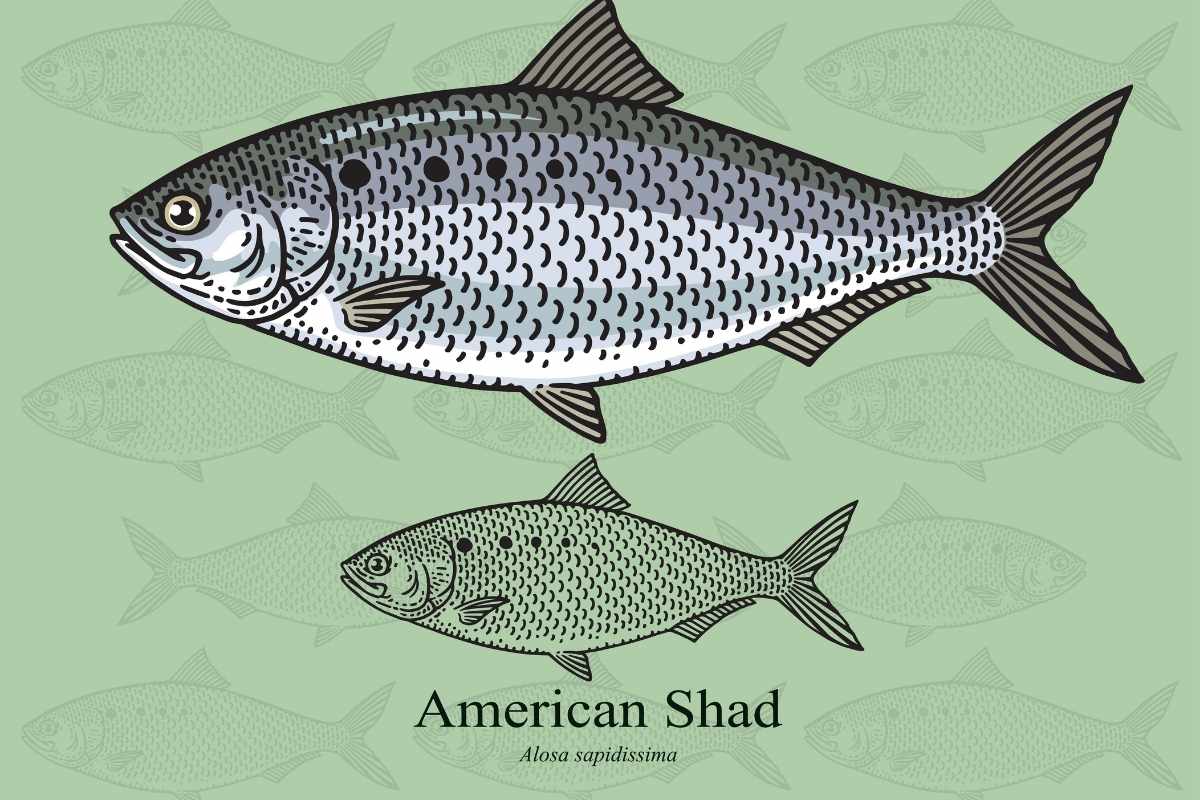 American shad has a bluish green upper body with silvery sides. The normal habitat of the American shad is up and down the Atlantic coast. They were introduced to the North Pacific Coast.

George Washington’s troops stationed at Valley Forge did not go hungry once they discovered a large bounty of American shad along the Delaware River. 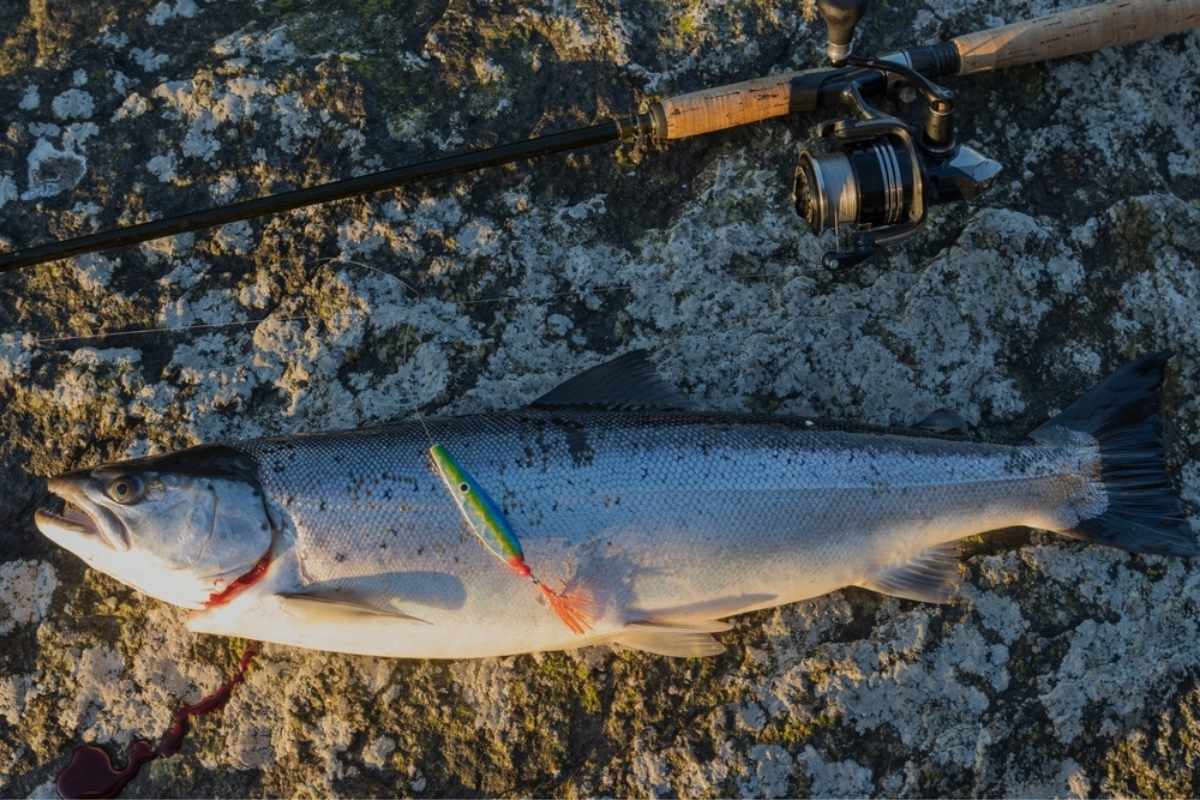 They have a white belly, similar to the light belly of bluefish. They have two large canine teeth at the tip of their upper jaw, which is different from the teeth of the bluefish. The similarity is that both fish have numerous teeth which you do not want to clamp down on your fingers. 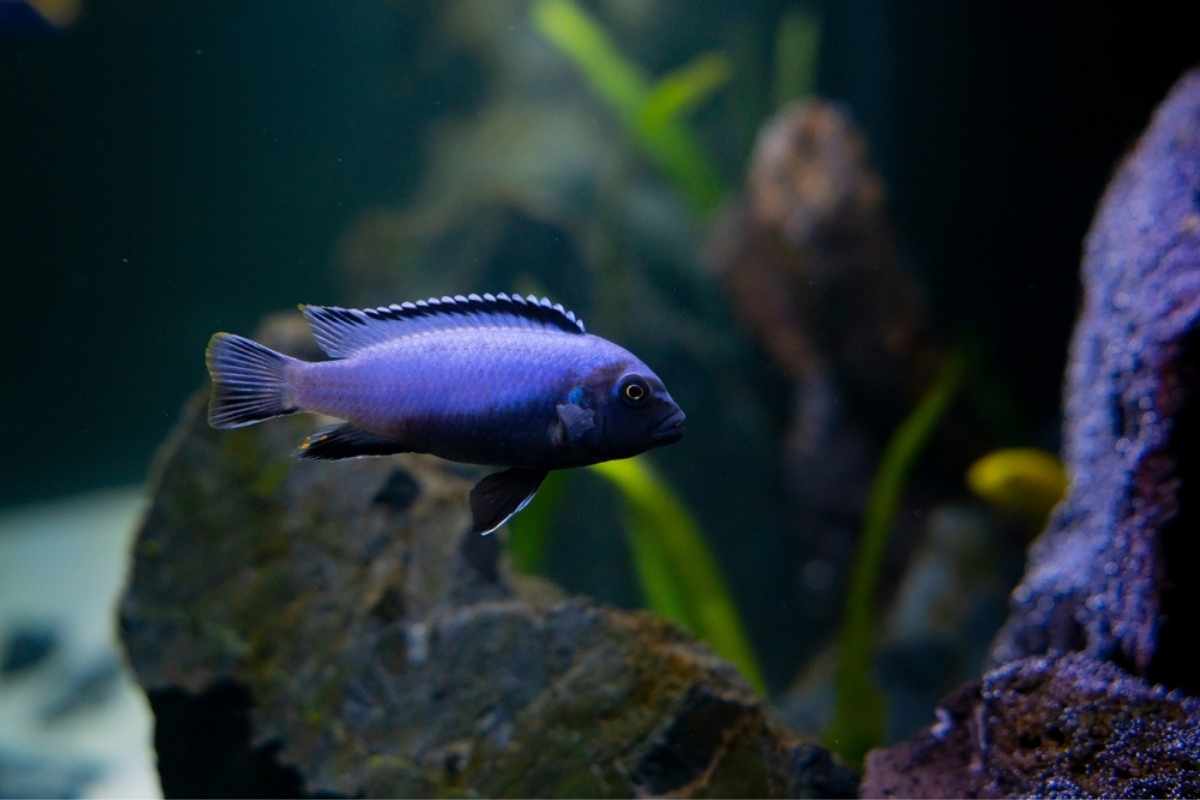 The blue cichlid is not a juvenile bluefish. The fish, native to Africa, was known to exist more than 12,000 years ago. It is also known as the blue peacock cichlid or the blue peacock fish.

Blue cichlids are somewhat aggressive, preying on smaller fish, such as the mbuna and other Haplochromine cichlids. Bluefish similarly prey on smaller fish, eating everything in sight. Smaller bluefish are sometimes easily mistaken for the blue cichlid, with females reaching a length of around four to five inches in length, while males reach a length of about six to seven inches.

Some people keep blue cichlids in an aquarium environment. 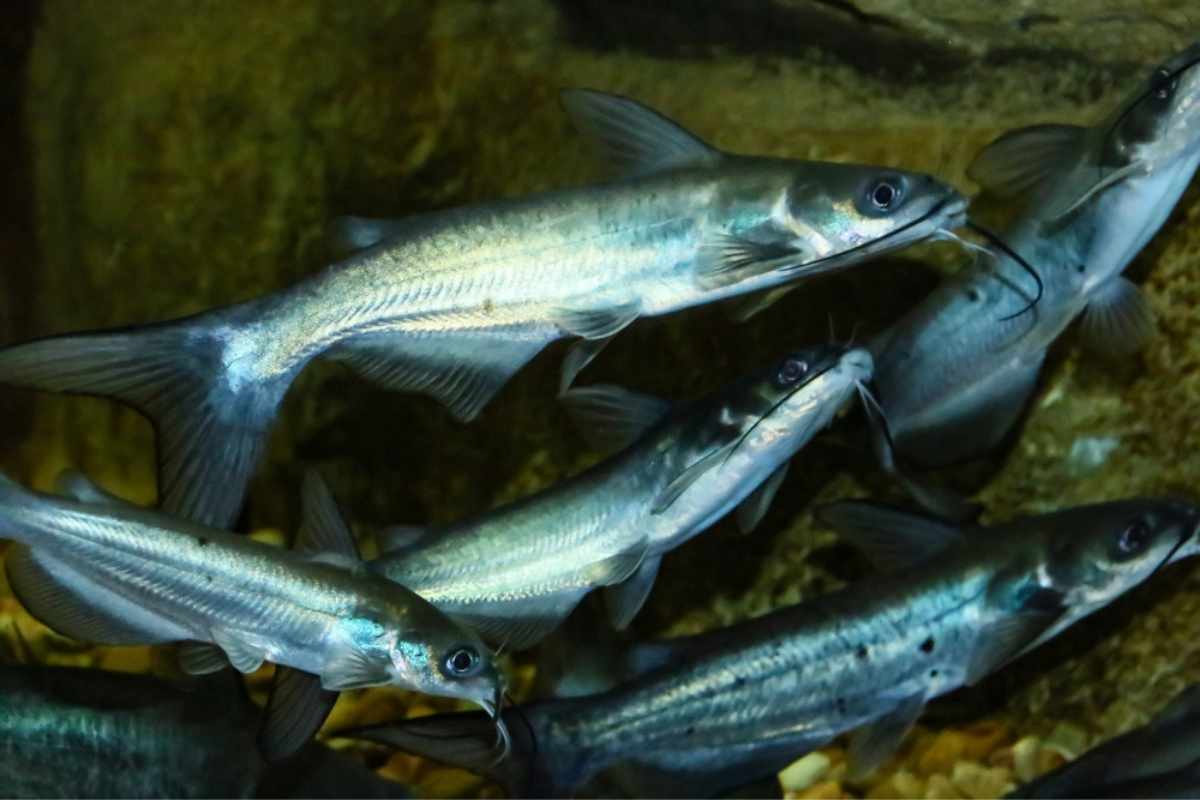 One other difference includes the multiple spots on the channel catfish. Bluefish have only one black blotch on their bodies. The channel cat is a common species throughout the United States and in some areas of Mexico and Europe.

The fish often reaches a larger size than bluefish, although many are of similar size. Some catfish have weighed in at more than 50 pounds.