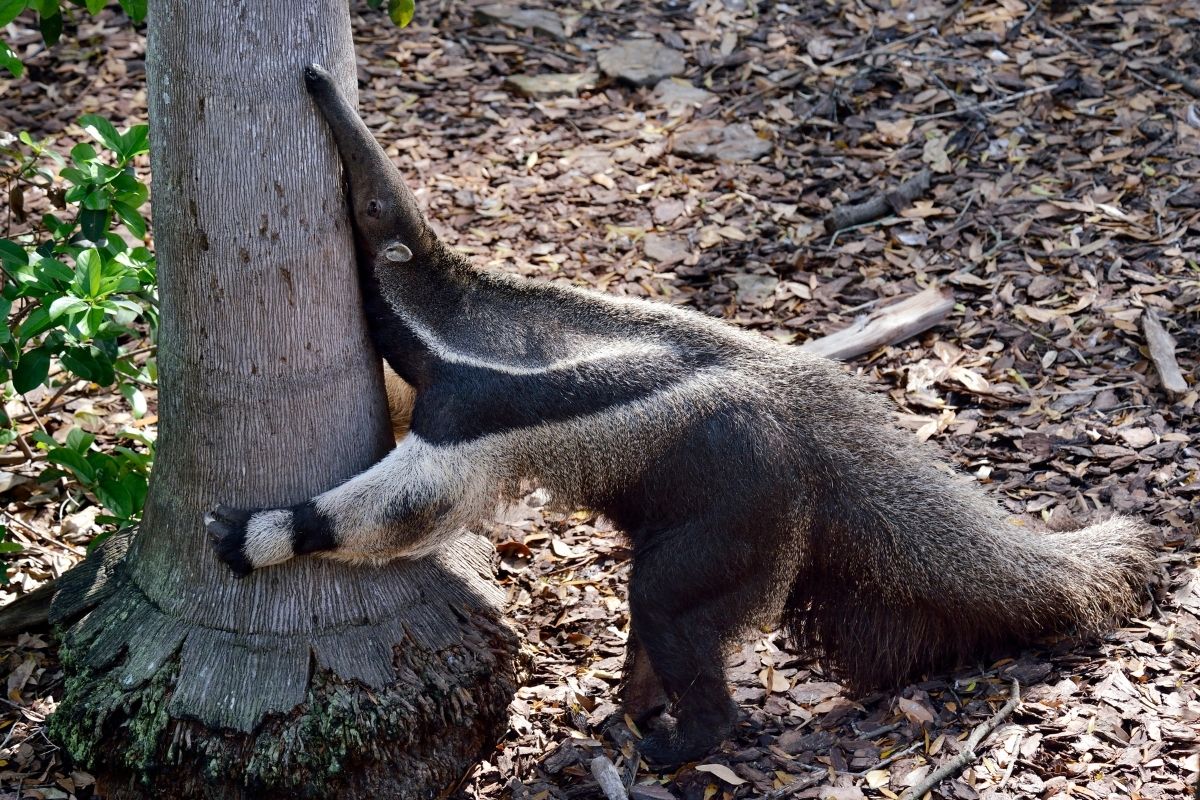 Anteaters are silly-looking mammals that fascinate anyone who looks at them. With their long snouts, slow-motion movements, and coarse and spiky hair, they’re quite interesting to watch. Anteaters live in Central and South America and get their name from their diets.

Did you know that it’s possible to tell anteaters apart by their front claws? These claws, which are also known as thumbs or fingers, make it easy for the anteaters to tear open termite mounds or logs to reach the ants they love to eat. So, what kind of ants do anteaters eat?

Do they prefer one type above another? Do they ever eat anything other than ants? Let’s find out!

What do Anteaters Eat?

As we all know, anteaters generally (and primarily) eat insects like termites, ants, and other small critters living in the dirt. They lick up these insects with their incredibly long tongues — anteater tongues can be up to two feet long! — that they can flick out of their mouths about 150 times a minute.

These insects provide anteaters with all the protein and nutrients they need to survive. With strong claws, no ant-filled log or termite mound is a challenge a hungry anteater can’t overcome.

What do Different Types of Anteaters Eat?

Not everyone realizes that there are actually two main kinds of anteaters: the giant anteater and the lesser anteater (tamandua). The tamandua is smaller than the giant anteater, is most active at night, and has an unpleasant smell. In addition to these differences, the two types of anteaters also have slightly different diets. 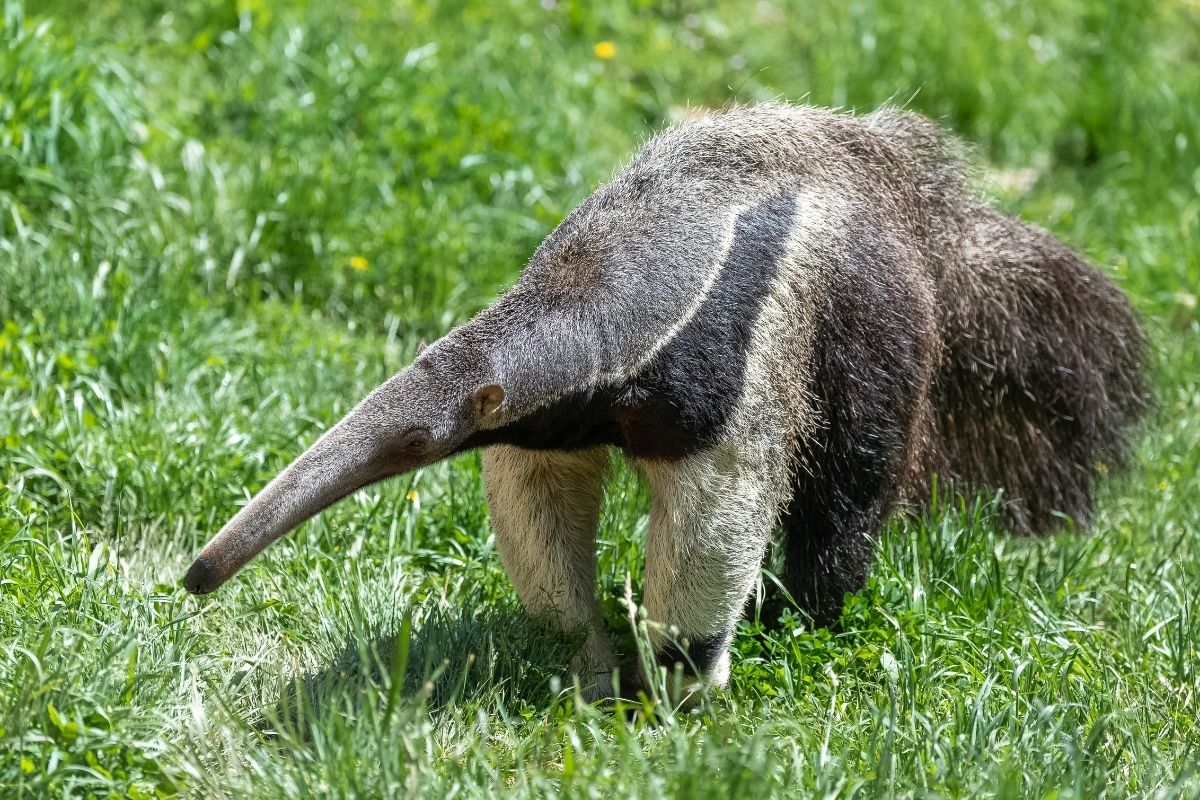 Giant anteaters mainly eat ants and termites, though it seems they prefer termites above ants. However, if they are in areas where termites are scarce, these anteaters will happily eat only ants. They do also like to indulge in fruit, eggs, carrion, and small lizards.

However, they steer clear of hornet, wasp, and bee nests. 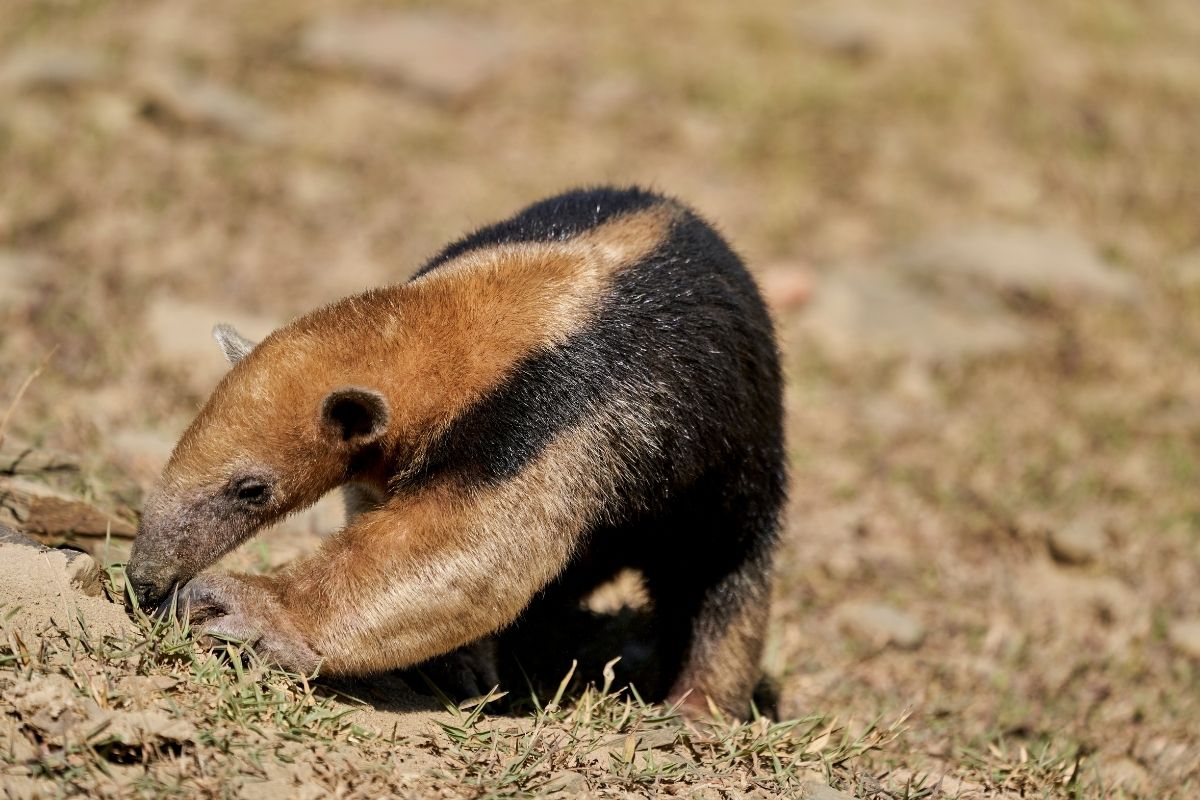 Lesser anteaters mostly only eat ants. But, if they can get their paws on them, they will also eat scorpions, grasshoppers, and spiders. Sometimes, they also eat small lizards and some fruit on occasion. Just like giant anteaters, they know how to stay away from hornet, wasp, and bee nests.

How do Anteaters Hunt? 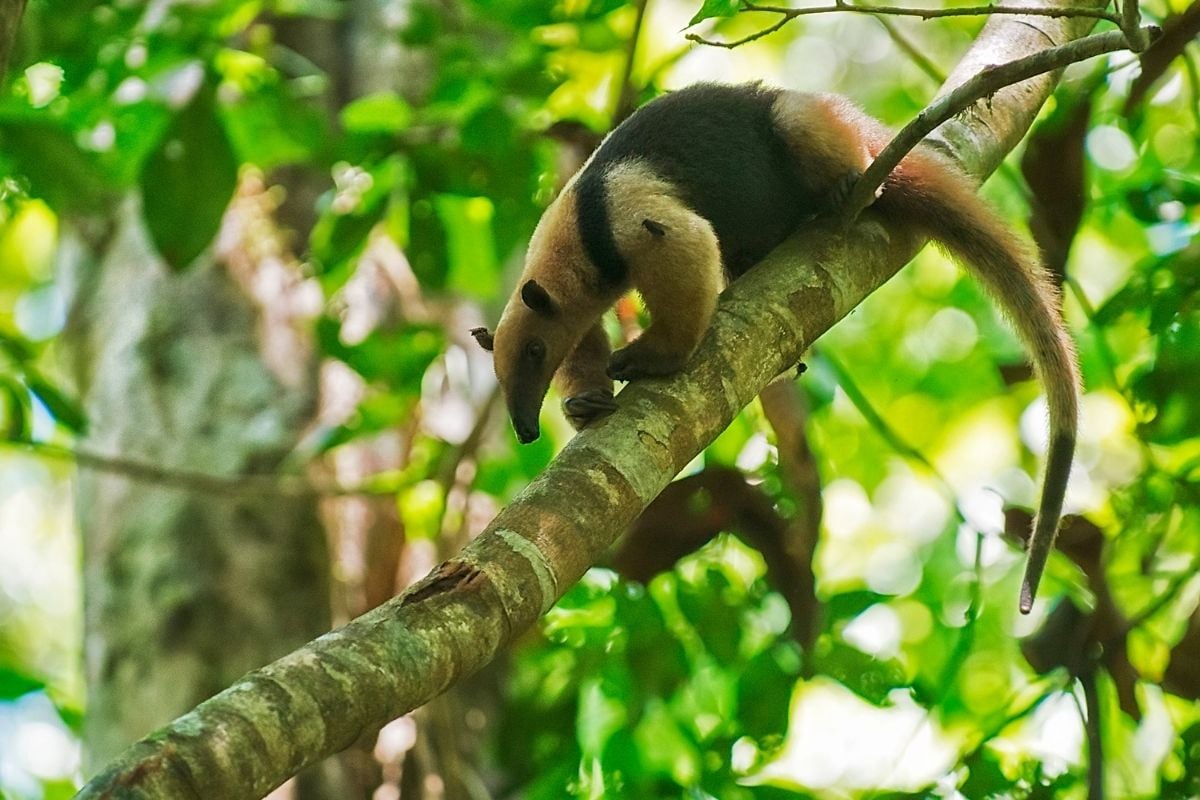 Right, so how do anteaters get their food if they look like they couldn’t be bothered to walk fast? They’re actually good at hunting for ants. Also, although anteaters take their time when walking, they can run pretty fast when the need arises: 30 mph.

They’re also capable swimmers and can climb well enough to get by. As for actual food-hunting, anteaters use their very long tongues to lick up any misfortunate ants that are in their way. They break open termite mounds and logs and use their tongues to reach all the scurrying ants.

Sticking their noses into holes is what anteaters do well, and it’s how they’re able to eat enough to survive. They don’t have really good vision, so they rely on their nostrils to help them find food. Anteater lips are formed like cylinders, and they don’t have teeth.

While eating, they also ingest small stones and other detritus, which helps them digest their food by crushing them.

What do Baby Anteaters Eat? 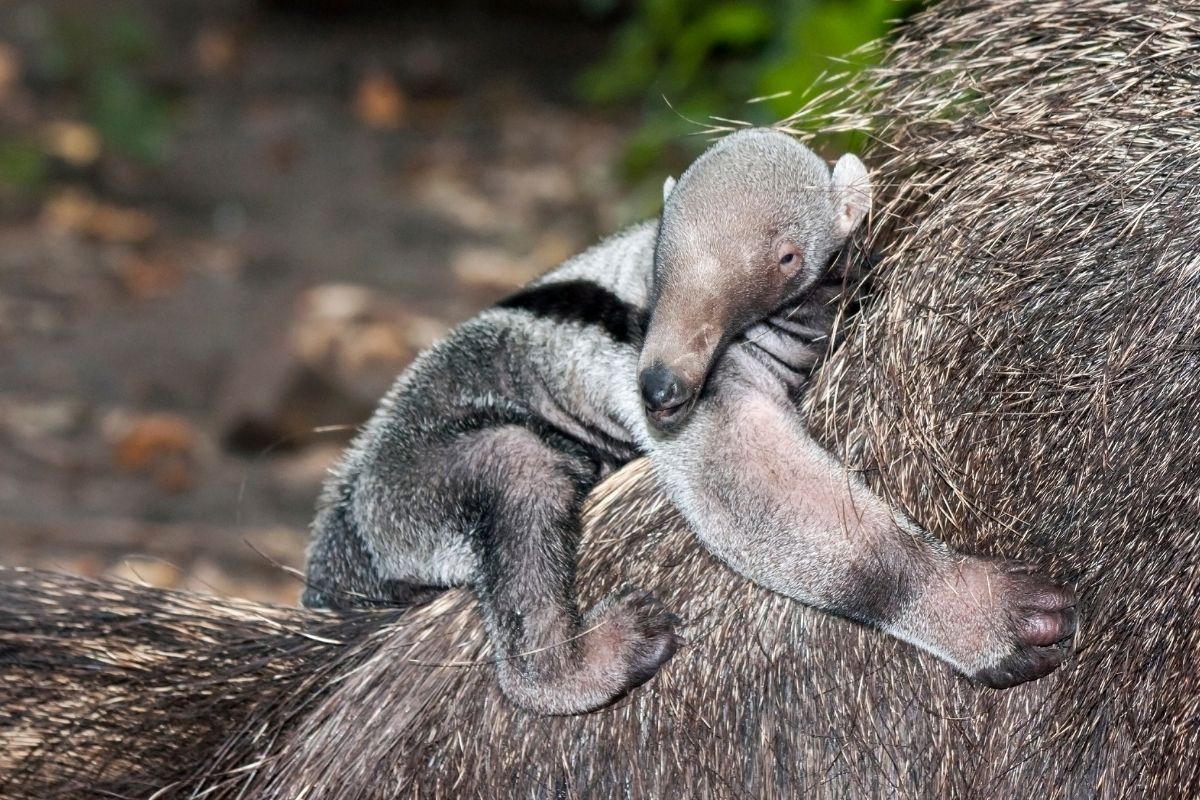 Baby anteaters, much like any other mammal, drink milk from their mothers for the first months of their lives. They eventually start to eat ants but will continue to drink milk as well for up to six months. They grow quickly and will eat more and more ants and move away from milk as they develop healthily. 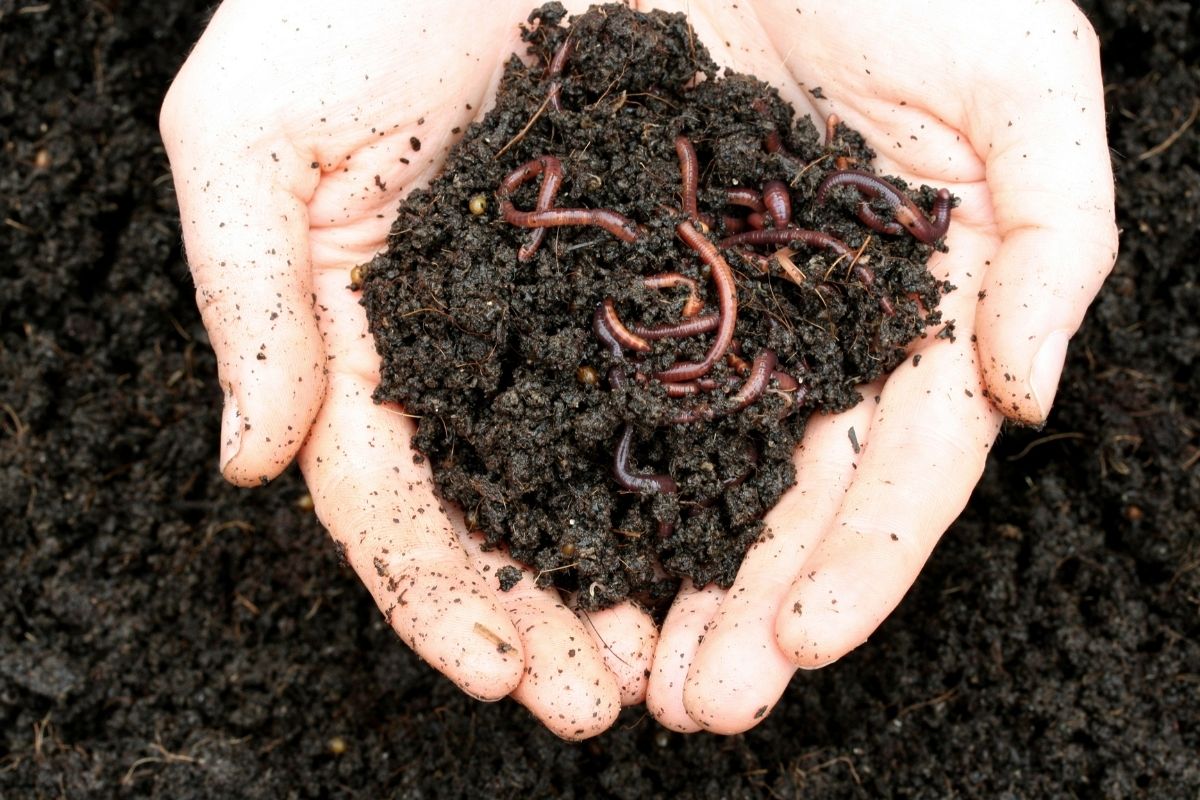 We’ve mentioned before that anteaters primarily live off ants but that they also eat other foods when the opportunity arises. Here is a list of all the other foods anteaters occasionally eat in addition to ants and termites:

How Much do Anteaters Eat?

Anteaters have to eat a lot of ants or termites to make up the protein they need for survival. Ants are small, so it only makes sense that an anteater would need thousands to keep their bellies full. On average, anteaters can eat between 20,000 and 35,000 ants and/or termites a day.

It’s unclear who managed to do all that counting!

See also  How Do Porcupines Care for and Raise their Young?

The number of ants eaten will sometimes be lower if an anteater has eaten other fruits or animals during the day.

What Animals Compete with Anteaters for Food?

You wouldn’t think that anteaters have much competition when it comes to food, but they sometimes compete with jaguars for insects. They also compete with people if they live near settlements or villages. Anteaters have been known to tear into houses’ walls and foundations to find ants and termites.

They will also dig through garbage and raid pet food bowls or bird feeders occasionally.

Does an Anteater’s Diet Have an Impact on Other Species?

Yes, anteaters’ diets can affect other species of animals in many ways, especially ants. Anteaters will eat an ant colony, including the eggs and larvae. This means complete annihilation of that colony.

Other animals living close to anteaters are also affected. For example, it has been found that giraffes and elephants have stomaches full of ants after they ate food near where anteaters recently ate. This is possibly because the ants fled and ended up in the food that these animals eat.

How Much Water Does an Anteater Drink per Day?

Anteaters have to drink a lot of water every day. When eating so many ants, formic acid is consumed as well. Formic acid can act as a natural pesticide for ants, and for anteaters, it is toxic.

So, to detoxify this formic acid, anteaters drink a lot of water — up to 13 gallons a day.

Are Anteaters Dangerous to Humans?

No, anteaters are not dangerous to be around humans. They are actually shy and gentle creatures that only want to eat and sleep. They flee from people, but if threatened, they might react.

It’s rare, though, and you don’t have to worry about them attacking people. In fact, those who have anteaters as pets say they are very loving and even more expressive than cats or dogs.

Anteaters are interesting creatures — they look silly when walking but are great at eating ants. Their weird tongues are actually pretty awesome and if you ever encounter one, enjoy watching them go about eating ants and marvel at how long their tongues are