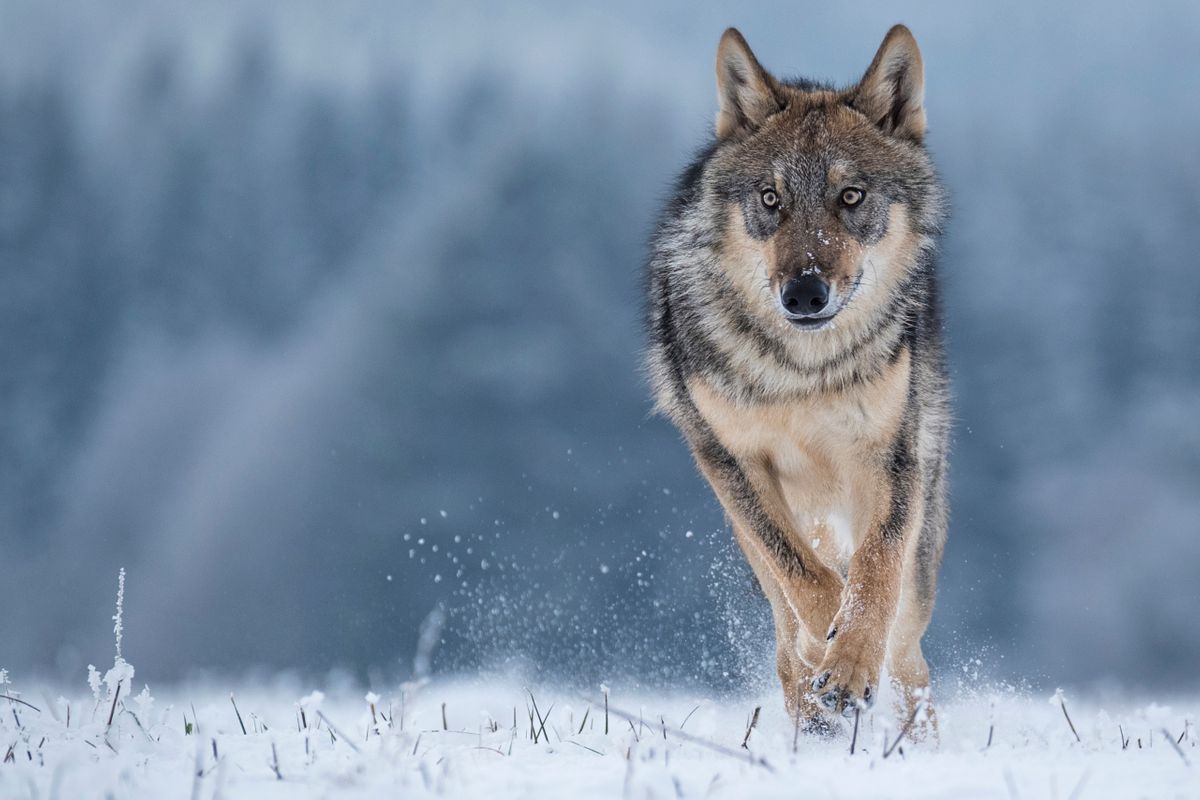 Have you ever been sitting around the campfire, in the wilderness, on a cool evening and heard a distant howling? And then did you wonder whether it was a coyote or a wolf? Or maybe you were out hiking, and you could have sworn you saw a fox dart into a hole, but maybe it was a coyote? Well, if you’ve ever been confused between the three, you’re in luck as we look at coyote vs. wolf vs. fox.

Although they are all part of the dog family (Canidae), there are some differences between coyotes, wolves and foxes. Wolves, on average, are 88lb; coyotes are 35lbs, and foxes are 14lb. Wolves prey on larger animals as a pack, coyotes’ medium animals alone, and foxes smaller animals alone.

Aside from size and what they eat, are coyotes, wolves, and foxes really so different? What are some of their similarities? Do they ever get into conflicts, and what are their behaviors amongst themselves and each other?

The Coyote, The Wolf And The Fox, Differences In Anatomy, Ancestry And Classification 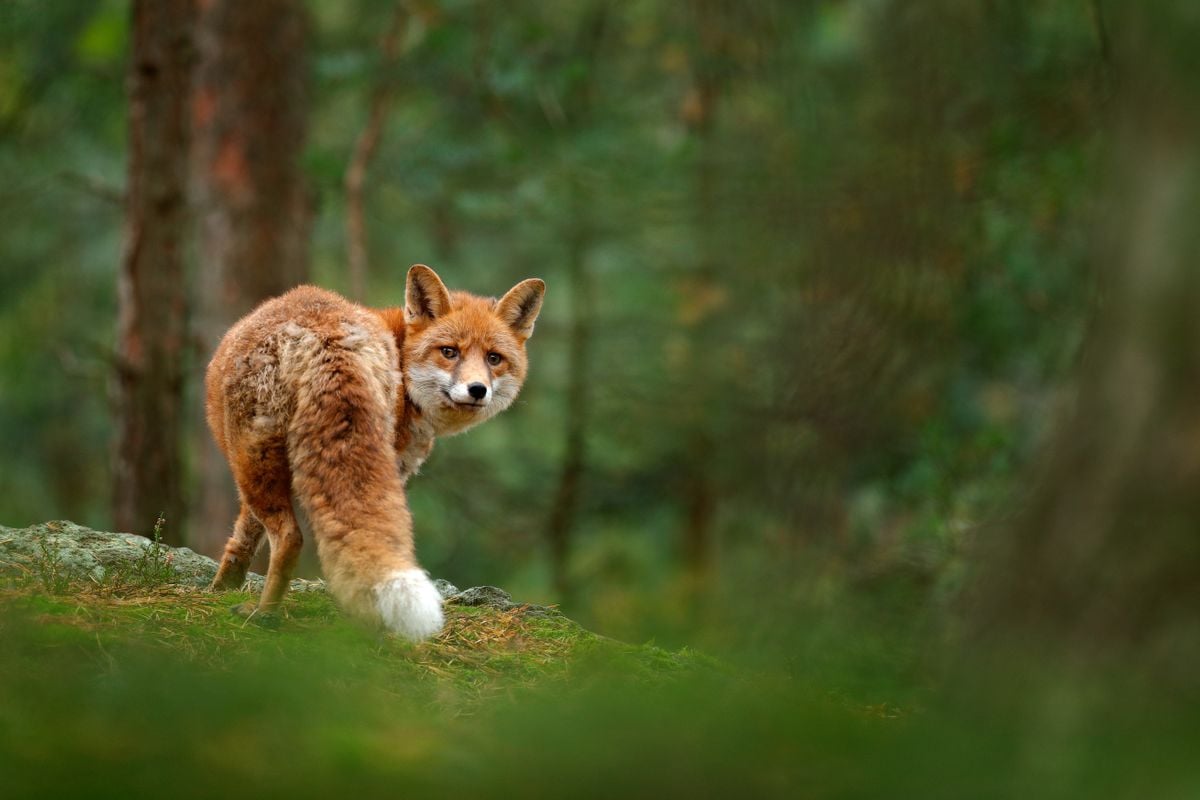 Taxonomy Of Coyotes, Wolves And Foxes

When we speak about taxonomy, we are just talking about how different animals are grouped according to their features and genetic make-up.

By using nomenclature and taxonomy, we can quickly tell how related any two (or three) different species may be.

Below the taxonomical listing are compared for these three species.

Right from the start, when we compare coyotes, wolves and foxes, we see that they are all closely related.

They are all dog-like carnivores in the Canid family. The first divide happens at the genus level, where foxes break off into their own group, while coyotes and wolves keep the same genus and separate at the species level.

A few notes. Foxes have different species under the genus “Vulpes.”

Coyotes are all the same species, with 19 different subspecies, and wolves are similar with only three different species and around 40 subspecies.

There is a lot of diversity out there, so for comparative purposes, we will look at coyotes (not focusing on a particular subspecies), grey wolves, and red foxes, as these are all charismatic representatives.

Ancestry And Genetics Of Coyotes, Wolves And Foxes 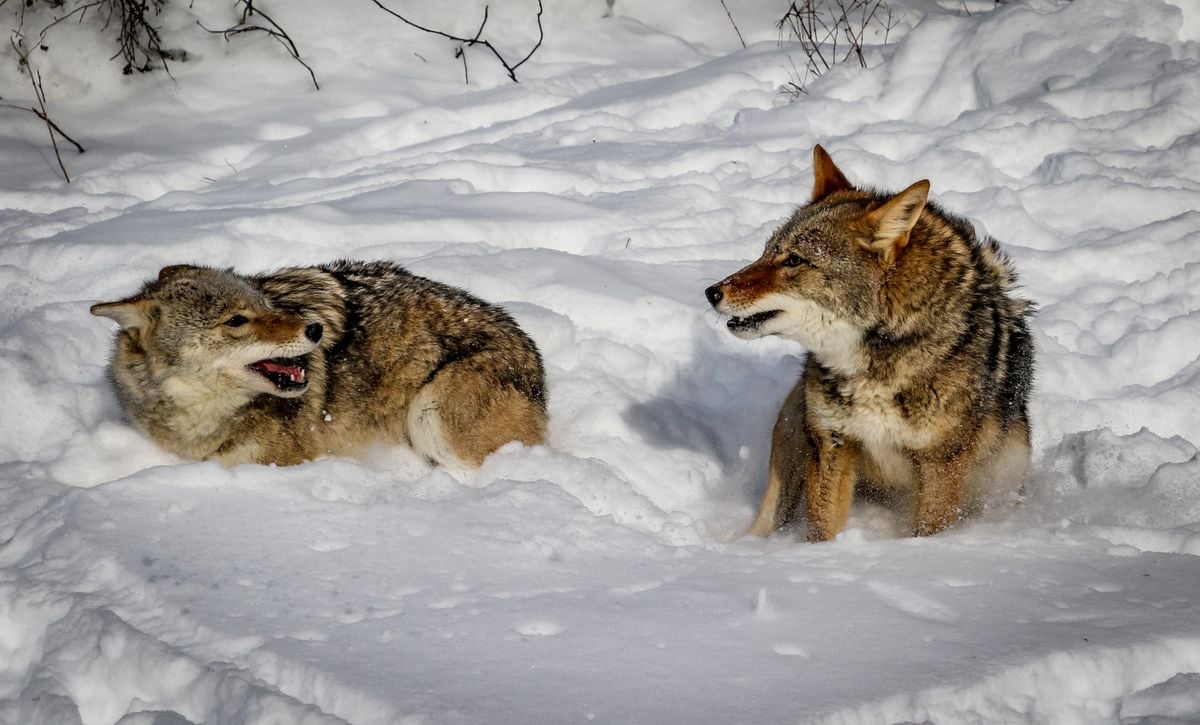 When we look at the genetics of an organism, we are trying to determine where it fits in during the process of speciation.

When we look at these three canids, we see that they had a very near common ancestor. It is believed that around 10 million years ago (around the Miocene period), the split between wolves and foxes occurred.

Coyotes and wolves continued with the same ancestors, so much so that they can cross-breed and produce fertile offspring even today. There was still, however, a point where coyotes and wolves split to create two distinct species.

Let’s take a closer look at some of the defining physical characteristics of coyotes, wolves and foxes.

Below the three (coyote, grey wolf and red fox) are compared along easily observed criteria.

They are grizzled gray or buff on the back, with black-tipped hairs on top. Below is pale cream to grey with yellow hues. The face can be reddish-brown to grey. Coyotes have a bushy black-tipped tail.

Grey wolves tend to be grey in color, although white and black variations do occur.

Red foxes tend to have orange to red fur on their backs, flanks and heads, with white fur on their neck and chest. They have bushy tails with black tips and black feet, legs and ears.

We see that visually speaking, the three species are similar.

Wolves are generally the biggest, followed by coyotes, and then last are the foxes. There are some areas of overlap between some of the smaller of the wolf subspecies and the larger of the coyote subspecies and between the coyotes and foxes.

All three are very “dog-like” in appearance though.

Ecological, Behavioral And Distribution Differences Between A Coyote, Wolf And Fox 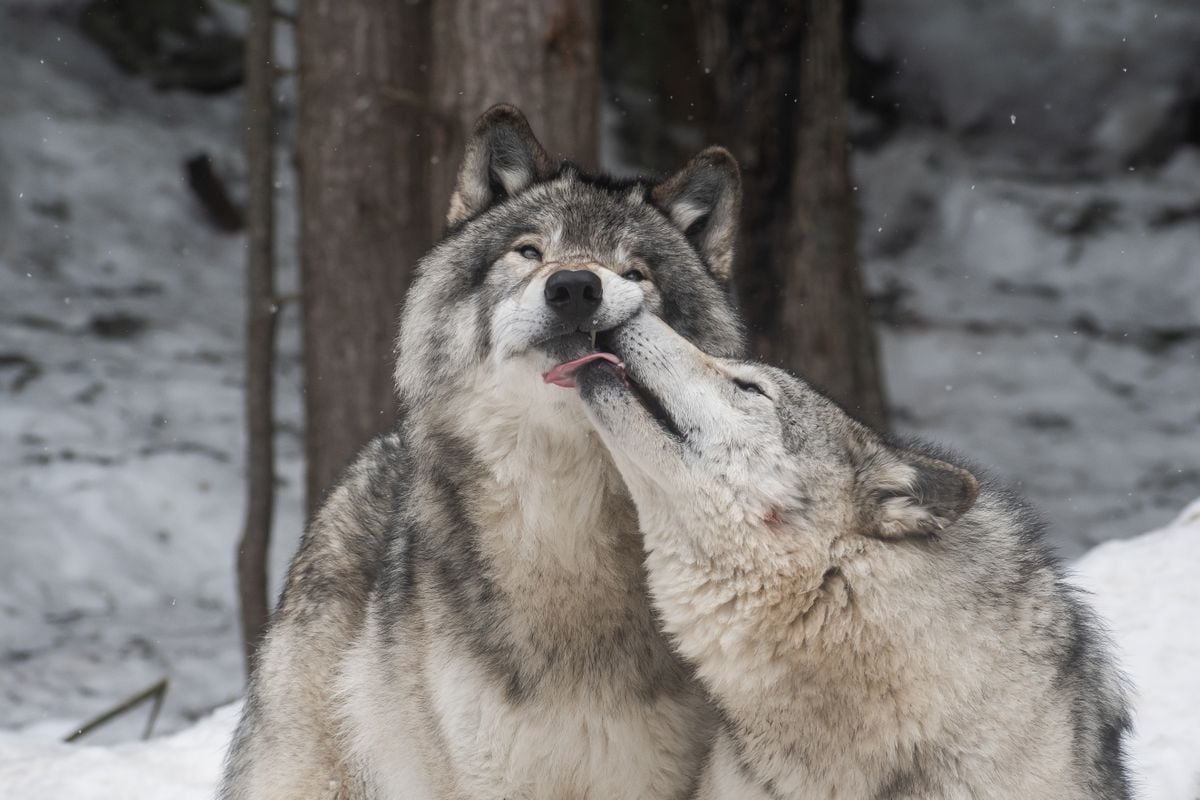 When comparing coyotes, wolves and foxes along distribution, hunting techniques, food items and social behaviors criteria, we see many similarities and a few differences that allow them to co-exist.

Distribution Of Coyotes, Wolves And Foxes

The geographic range wherein we find these three species:

Coyote can be found throughout the majority of America, both North and Central.

Grey wolves are widespread, appearing throughout most of the Northern Hemisphere. This includes North America, Europe and Asia (Other wolf species are even found in North Africa).

We see that while grey wolves and red foxes (and actually wolves and foxes in general) are more widespread in their distribution, coyotes are “limited” in terms of only occurring in the Americas.

Coyotes occupy various habitats ranging from forests, grasslands, coastal areas, swamps to rural and urban areas. Coyotes have adapted to the pressures of urban areas by seeking out wooded pockets generally found in parks and on golf courses.

Red foxes are highly adaptable and can utilize a wide variety of habitats. These include forest margins, on the edges of agricultural land and near marshes, the greater the plant diversity, the better.

When comparing along a habitat gradient, we see that the smaller coyote and foxes can move in closer to humans, while wolves tend to stay further away in wilderness areas. The accessibility and availability of food is a driving factor for habitat selection.

Habits, Hunting And Food Of Coyotes Wolves And Foxes 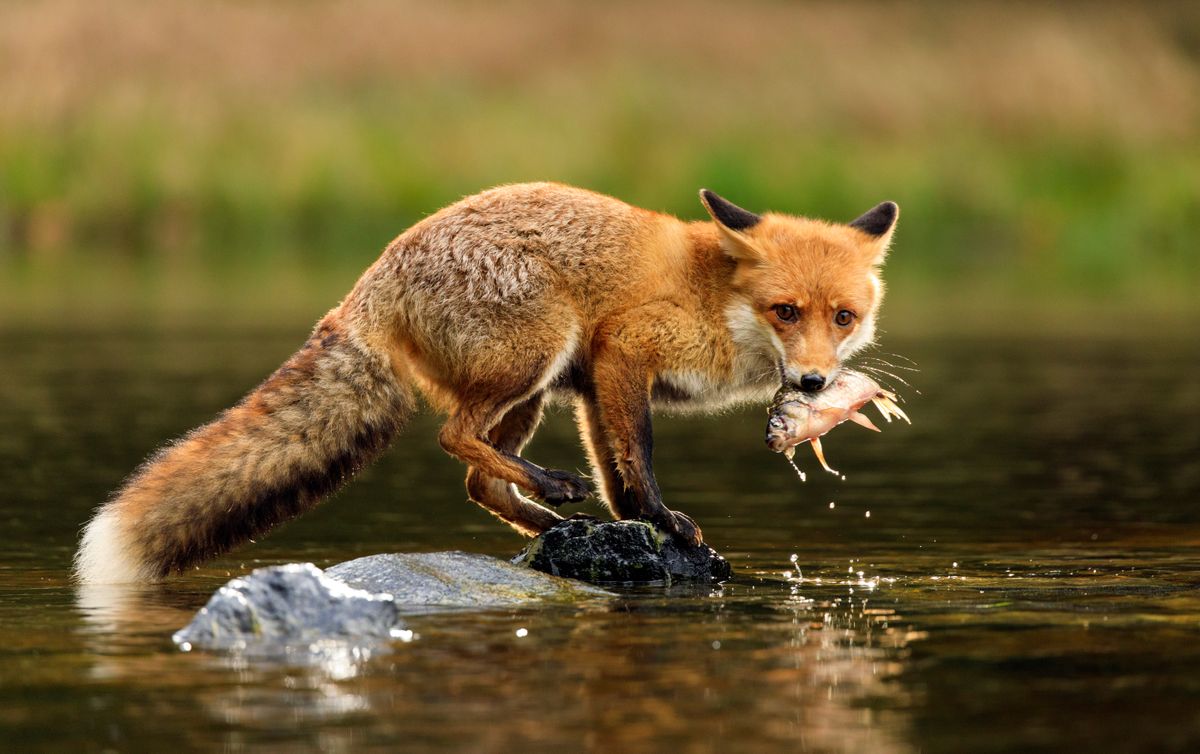 Coyotes are hunters, but they also scavenge. Coyotes are opportunistic feeders and have a large amount of fruit in their diet.

They are also carnivores with voles, rats, pocket gophers, white-tailed deer, feral pigs, rabbits, squirrels, turkeys, reptiles and amphibians making up the bulk of their diets.

Coyotes hunt smaller prey alone but will join together with other coyotes to take down larger prey.

Grey wolves are pack animals (usually between 10-30 animals) that live and hunt together to take down larger prey items. These include elk, caribou, moose, goats and sheep.

When hunting, a sick or old animal is targeted, which the whole pack then corners and takes down.

Red foxes use their agility when hunting to sneak up and pounce on prey.

Coyotes and wolves fulfill very similar niches in their environments. Both are predators that can hunt alone for smaller prey or join together with a pack to take down larger prey.

Foxes, however, are generally solitary animals and focus on prey in the smaller range of coyotes.

Conflict Between Coyotes, Wolves And Foxes 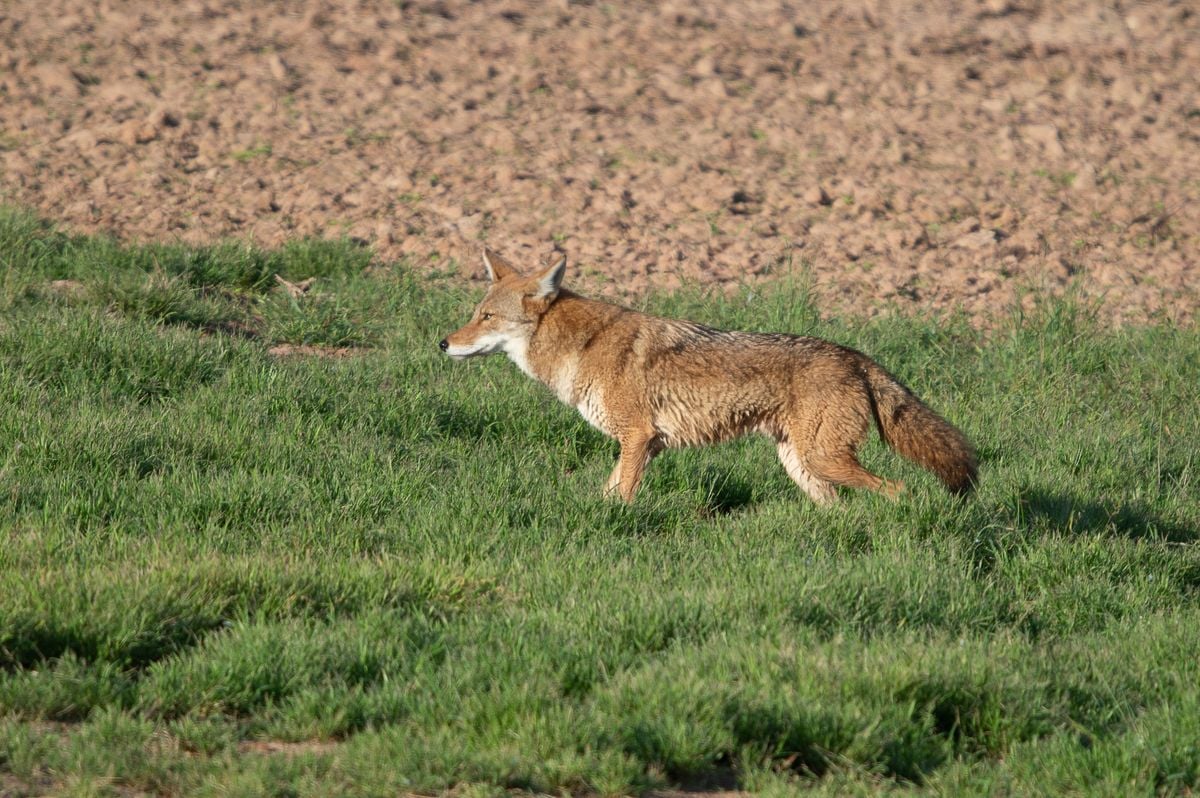 With so much overlap in their niches, it’s a wonder that coyotes, grey wolves and red foxes don’t out-compete one another.

The truth is, coyotes and wolves do attack and kill red foxes, and wolves and coyotes would also have a scuffle around food and territory.

However, wolves and coyotes have been known to interbreed as well.

The reality is, if the three were to come to blows, the wolf would come out on top, with its superior bite force, size and aggression; the two smaller canids would not stand much of a chance.

When looking at coyotes, wolves and foxes, we see many similarities in terms of location, habitat, behavior and even food sources. There are, however, some differences in terms of size, prey consumed and proximity to humans. All in all, the three of them have vital roles to play within the environment.