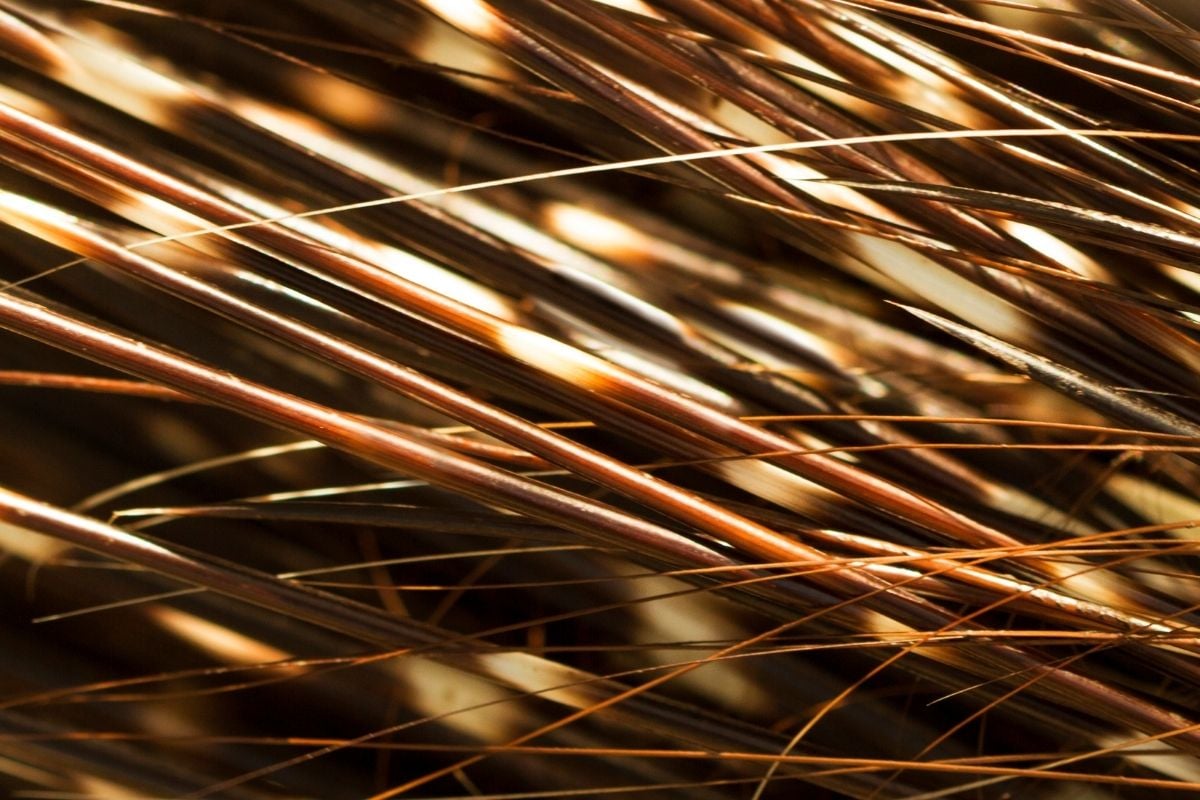 Porcupines are herbivores that love to eat leaves, twigs, bark, and green plants. They are considered rodents with brown, yellow fur and stiff quills covering their bodies except for their soft stomachs. Weighing only about 20 pounds and their length is about twenty-five to thirty-six inches full-grown, males are bigger than females.

They have a prehensile tail which is like a third arm and can wrap around a tree branch, allowing them to be stable climbers. They are the second largest rodent in North America, with the capybara leading them in size. Porcupines tend to be nocturnal but sometimes wander around during the daytime.

Tell Me about the Quills of a Porcupine 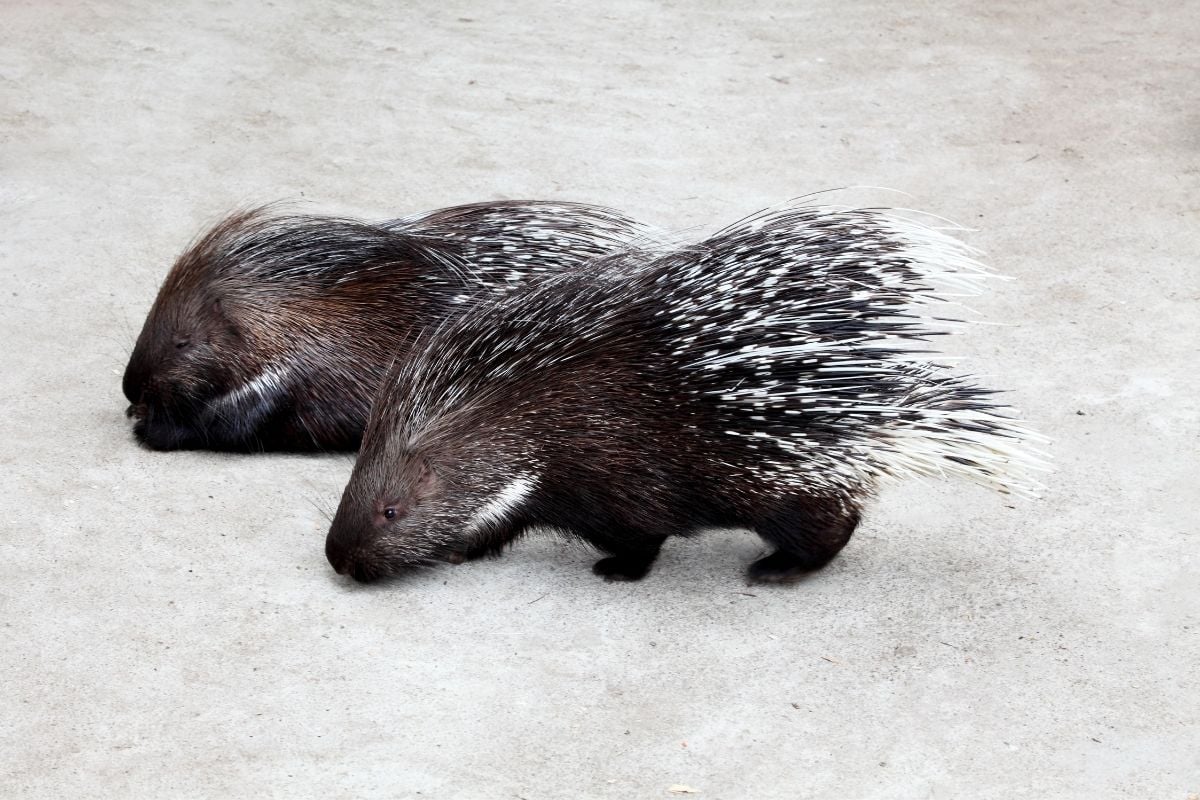 Porcupine quills are hollow hairs made of hardened keratin that look like hollow feathers. Keratin is the same material that your fingernails are made of and the same as porcupines’ claws. They have a saw-toothed feathery barb at the end of the quill that makes it stuck in you if you should happen to get quilled.

They are the self-defense mechanism and protection of the soft furry body of the porcupine. The quills are sometimes called guard hairs because they are really just hardened hairs. The interesting part is they contain an antibiotic naturally in them.

See also  Why Are Honey Badgers So Fearless?

Does this mean the porcupine protects its predators? Well, yes, sort of, but it is really to protect the porcupine if it accidentally gets poked by its own quills. Quills can vary in length, depending on the species of the porcupine.

The average quill is about two to three inches, but the African crested porcupines can have quills that are a foot long and as thick as a straw. One porcupine can have about 30,000 quills spread over its back and on the end of its tail.

Can a Porcupine Shoot its Quills? 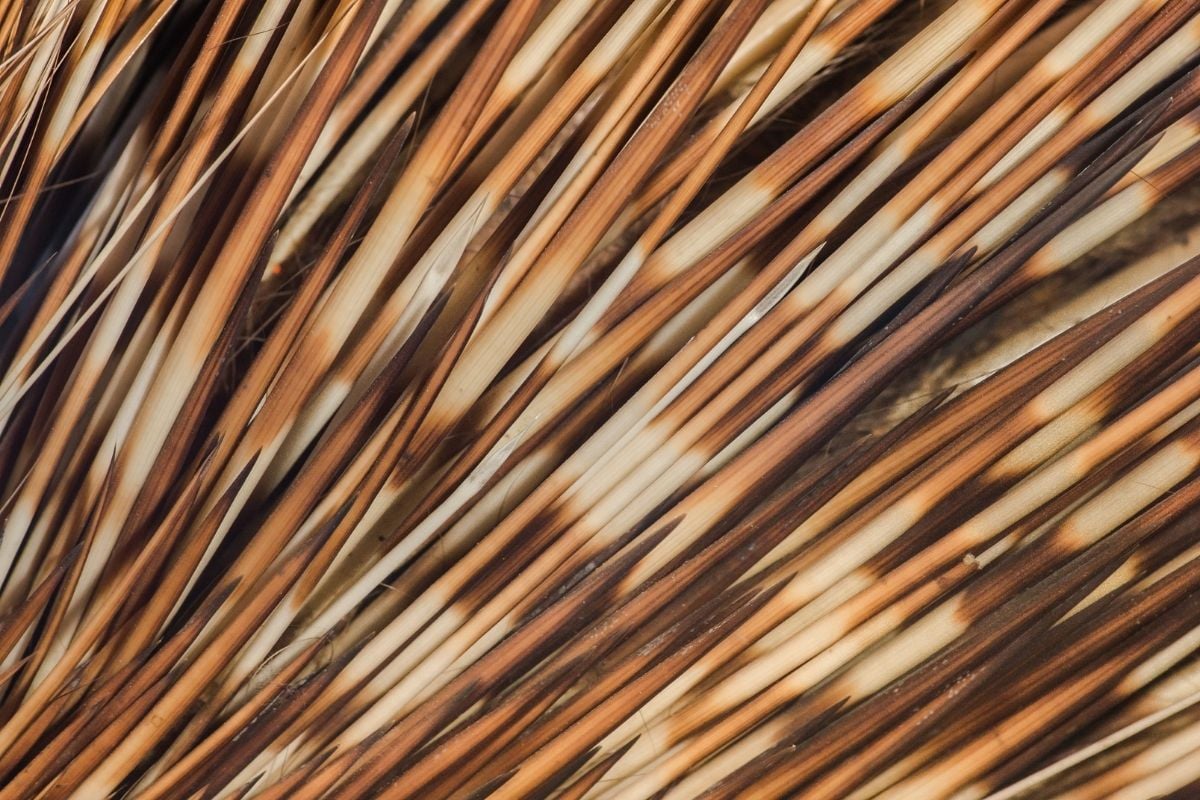 Porcupines cannot shoot their quills, not even one inch, but I would not get close to a porcupine. If you get too close, you could instantly have dozens of quills stuck in you. If you get close enough, the eight-to-ten-inch tail will swat toward you in a warning, and you will be stuck with the sharp quills.

The porcupine is not just a passive fighter. If they get threatened or angry with you, a porcupine will charge with its quills standing straight up, and his suit of armor will injure you.

Does it Hurt a Porcupine to Lose its Quills?

Porcupines’ quills are long and light, they are not deeply rooted in the porcupine’s skin, so it does not appear to bother a porcupine to lose their quills. The quills will also fall out naturally, just like our hair does. They begin to grow back at about one millimeter per day within a few days.

So, a porcupine can have quills of varying lengths and hardness.

Can I get Poisoned by Porcupine’s Quills? 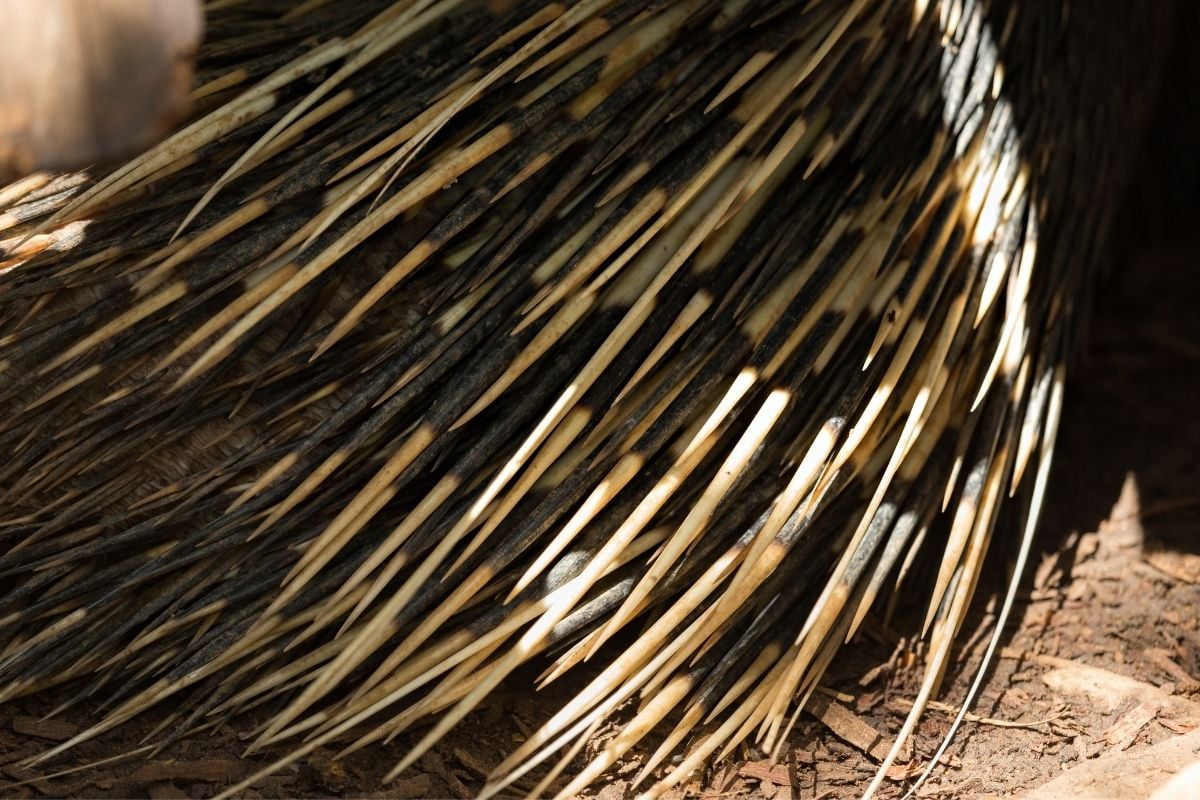 Porcupine’s quills are not poisonous, but you can bet they will hurt really badly with a sharp point and a barbed end. Not only that, but they are very difficult and painful to remove. If the quill gets broken off in your skin and embedded, it can cause a severe infection.

What do I do if I get Quilled by a Porcupine?

While the porcupine is generally a passive animal and will avoid humans, occasionally, you will walk upon one too fast or startle the animal. Their self-defense is their quills, and you can get stuck by them. If you should get quilled by a porcupine, start by gently washing the area and call your doctor.

Sometimes a doctor will recommend an antihistamine to prevent an allergic reaction but talk to your doctor before taking any medication. Your physician will probably numb the area and remove the quills. Sometimes quill tips can get stuck, and they may prescribe antibiotics to prevent infection as the quill tips work their way out of your skin.

What happens if my pet Dog or Cat gets Stuck with Porcupine Quills?

Our pets are naturally curious, and a porcupine looks at them as predators. If your pet doesn’t heed the quills that are standing erect, odor emissions, the kazoo-like sounds, whine, squeak, or chittering of the porcupine warning them not to come near, and your pet gets too close, they will get quilled. After they get stuck by a porcupine’s quills, a pet’s instinct is to run and then attempt to rub the quills out.

This action will only push the quills deeper and cause your pet increased pain. Also, you should not try to pull them out because if they break off, they can cause an infection in your pet. The best plan is to use a cone to prevent your pet from rubbing or clawing at their face or mouth – if this is where the quills are lodged.

Then you can gently wrap your pet in a blanket or towel to keep them still and bring them to your veterinarian. Your veterinarian will probably have to anesthetize your pet to keep it still during the removal process. Even with the vet doing this process, you may find that some quill pieces will take weeks to work their way out of your pet.

The sad part is that not all pets learn their lesson, and it is not unusual to have a pet get quilled multiple times by their curiosity towards the porcupine. 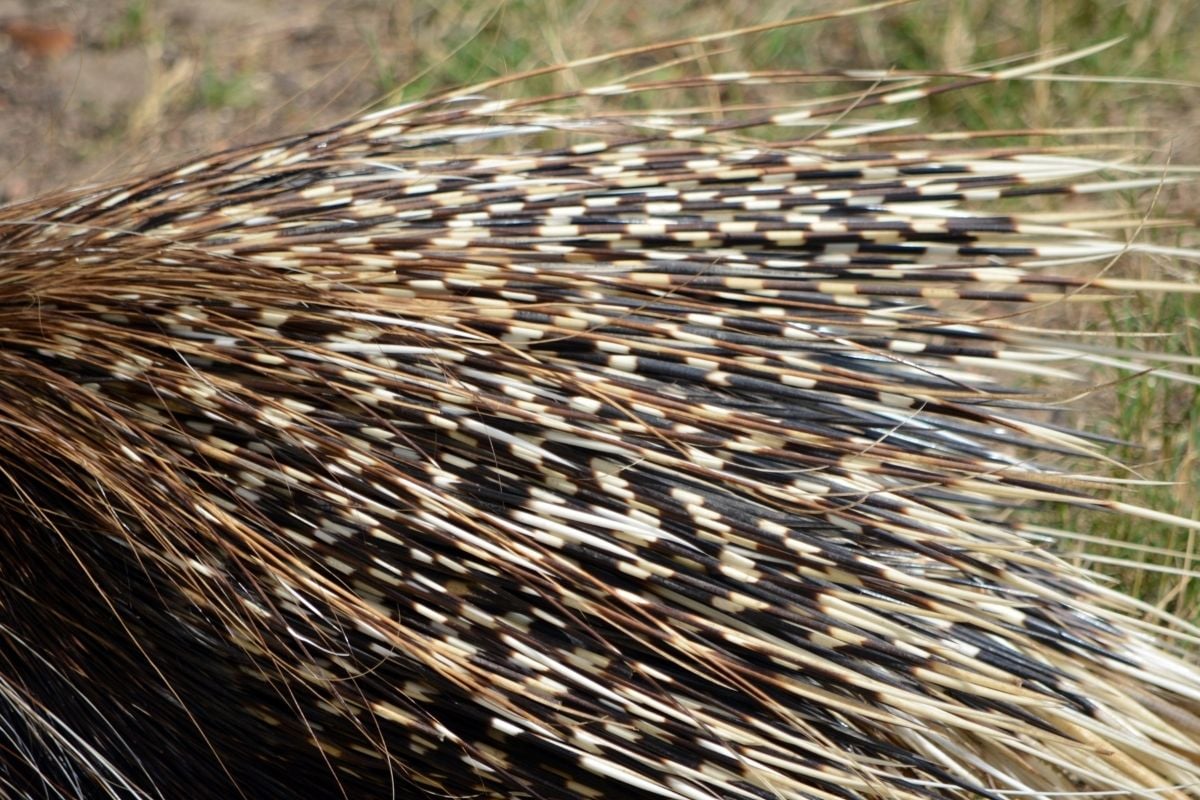 They would dye the quills in different colors and use them to decorate clothing, shoes, knife sheaths, and leather bags. The Lakota women from the Sioux tribe of North and South Dakota would sneak up on an unsuspecting porcupine and throw a blanket over the porcupine. They would use the quills that got stuck in the blanket.

Porcupine Quills an Inspiration in Healthcare

Healthcare has even studied the fantastic properties of the porcupine quills. With the hypodermic needle design, the quill’s antibiotic properties and fine points have been looked at for safer medication administration. They are even studying the quill for a possible skin staple that does not bend under the skin but is held in by tiny spurs, stays securely in the skin, and is easier to remove.

We can learn excellent applications by studying nature and applying them to applications in our world. Porcupine quills are quite excellent self-defense, and as with any wild animal, it is best to observe them from a safe distance or at a zoo.