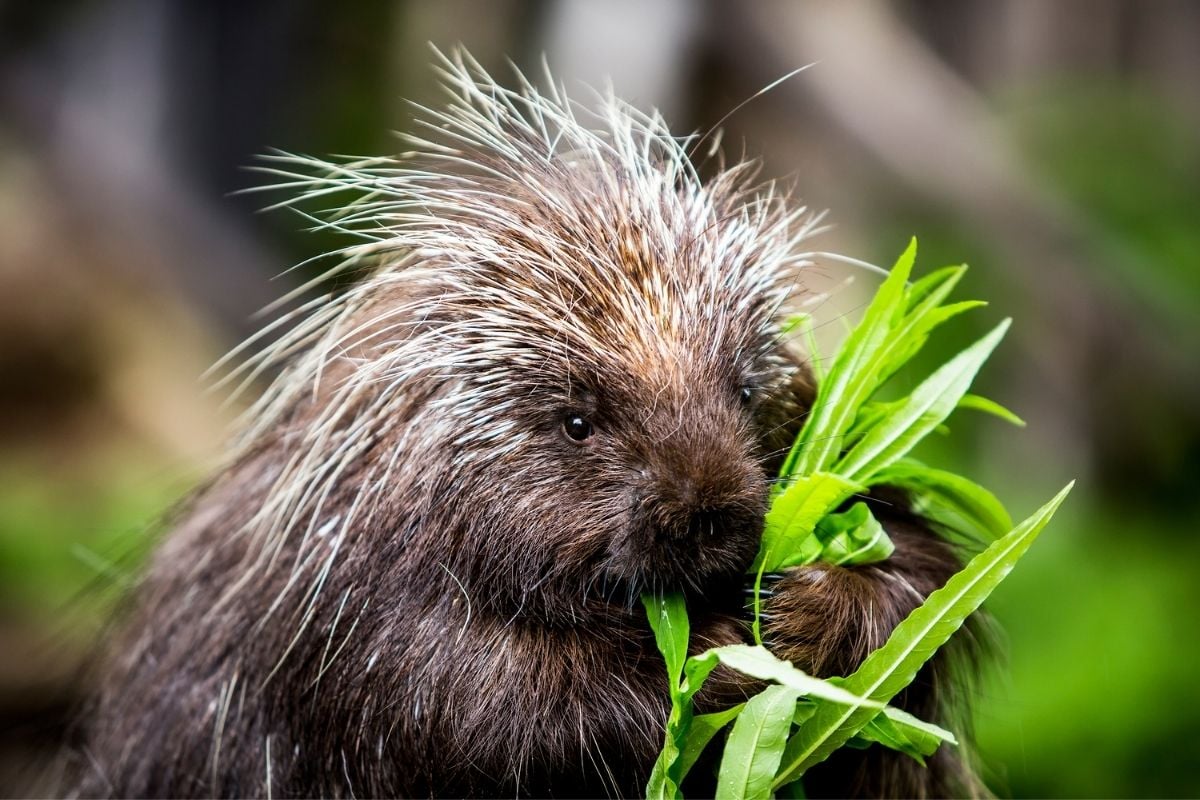 Many civilizations in Canada are said to have eaten North American porcupines. Depending on the culture, it had varying degrees of prominence in the diet. As a tribute to the cultural significance of porcupines, Malecite referred to the Micmac as “porcupine Indians”. Some people still eat porcupines today.

The number of porcupines in the area has decreased over the years in several civilizations, including the Vuntut Gwitchin (Gwich’in), Aishihik, Champagne, Hopedale, and Inuit.

How Do People Eat Porcupines?

Believe it or not, porcupine meat is very versatile, meaning you can prepare it way imaginable and still enjoy it. I sound so convincing even though I haven’t tried it yet. However, my in-depth research has shown that many cultures have eaten them, boiled, stewed, roasted them, and more.

Let’s learn more about catching them, how and where they live and how to prepare porcupine meat.  Some people even eat the porcupine fetus. Research shows that porcupine meat improves skin health, delays aging, fights off the infection, and supports heart health.

Typhoid, epilepsy, and cancer are also some diseases that people believe are curable by porcupine meat or medicines. The onion-like concretions that form in porcupines’ bodies are supernatural or ghastly in appearance.

If there were no alternative sources of food, many northern civilizations would only kill porcupines in those scarce times. The slow and clumsy movement of a porcupine on the ground makes capture relatively simple. Porcupines were killed in a variety of ways.

In the winter, Tselona Kaska burns the porcupine out of its house before striking it with a club or stick, as did Waswanipi Cree, Mistissini Cree, Blackfoot, Tahltan, Tlingit, and Vuntut Gwitchin. When rifles became available, the Sioux, Chipewyan, Vuntut Gwitchin, and Hare (Sahtu) peoples also utilized them to defend themselves.

Snares were utilized by the Montagnais (Innu) and Micmac (Mi’kmaq), but traps and snares were employed by the Micmac (Mi’kmaq) as well Dagenais, but the Spokane utilized both snares and traps. Before the arrival of the caribou, the Chipewyan people hunted porcupines during Autumn. Porcupines were an ideal prey for Kutchin’s hunts in the cold seasons when tracks in the snow or recently nibbled sections of spruce tree stumps could easily be found to aid in the pursuit.

The tree was hacked down and the creature was either clubbed or shot with a gun if it was spotted in a tree. There were times when traps were put in place at the entrance of its burrow. During the spring and summer months, Kutchin avoided hunting them since the animal had less fat.

There are several reported methods of cooking. The entire animal was cooked over/in the fire to singe off the quills before the flesh was cooked, by several tribes. Singeing, according to Kutchin, enhanced the meat’s flavor. 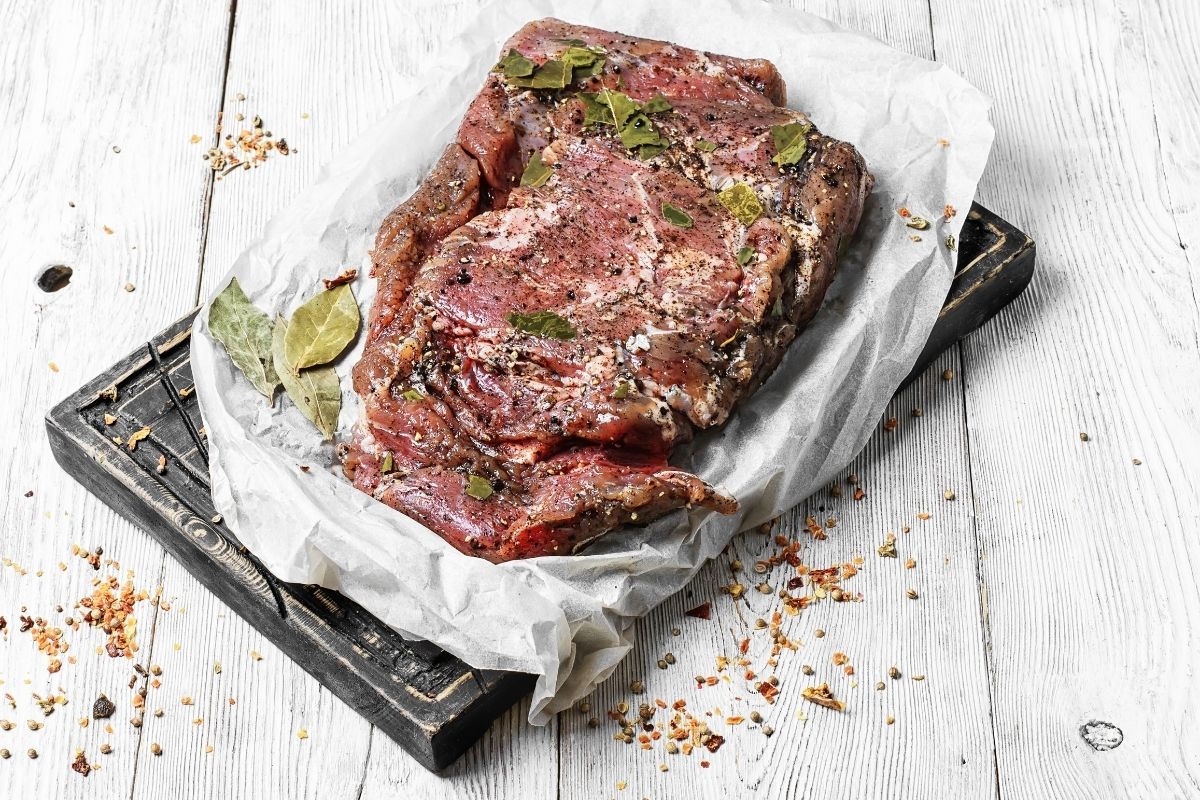 The Tlingit ate fresh porcupine, but they also dried or kept the meat for the winter. Fat from porcupines was rendered by slave women (Sahtu). Cree regarded the fetuses of porcupines as a delicacy.

What Other Purposes Do Porcupines Serve? 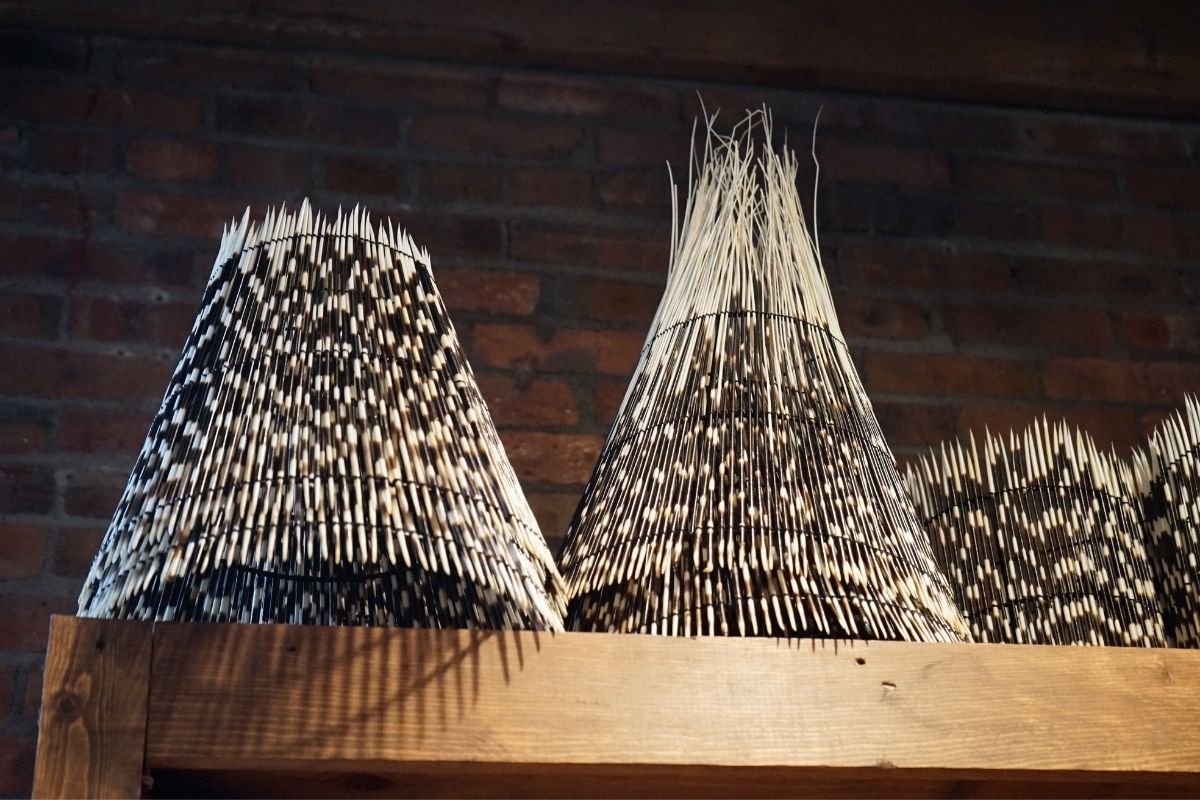 In addition, porcupine quills from North America were highly prized by numerous tribes. The quills are claimed to have been utilized by Lillooet. Tahltan made bows and tintacks from quills.

To decorate garments, baskets, blankets, and mats, the Tlingit adorned them with quills. As a means of trading for food, the Algonquins utilized quills to decorate their tunics, moccasins, and birch-bark baskets, as well as to aid in medical treatment. Quills were used to embellish clothes and decorate birch-bark vessels, embroider shoes, and design garments in various cultures.

The Micmac also drew nectar from the maple tree with quills.

Social Restrictions and Beliefs About Porcupines

The porcupine was employed as a medicine by many different cultures. Eyak nursing moms would consume porcupine soup to aid in the production of milk during breastfeeding. As a remedy for “cramps” in newborn babies, the Iroquois applied porcupine oil on the back and chest.

A medicine for newborn children was made by Micmac of Richibucto from porcupine urine, while Tutchone and Tagish believed that dropping porcupine fetuses inside the clothing of young women would assure easy pregnancies for women in the future.

The porcupines are the subject of several taboos. Porcupine brains were off-limits to Kaska because she believed they were harmful to her health, while Chipewyan shied away from the tail out of concern that it would make her fat. To avoid springtime skin blemishes, Tagish females did not consume porcupines during their teenage seclusion (the season when porcupines shed their quills).

Characteristics of a Porcupine

The porcupine is a rodent native to North America. Strong, short legs and black to brownish-yellow fur make it an excellent predator. It can climb trees because of the hairless soles of its feet.

This creature has little ears and a tiny head. Among the porcupine’s most distinguishing characteristics are its quills. The quill count of a porcupine can reach up to 30,000. They are long hairs with sharp tips at the ends, known as quills.

A quill has a hollow shaft with a solid tip and base. All of the porcupine’s body except its stomach is covered in quills. Its rump has the animal’s longest quills.

Its cheeks have the shortest quills.

How Porcupines Protect Themselves

To protect itself, the porcupine utilizes its quills. Poisonous quills cannot be fired by the porcupine. The porcupine will turn its backside on a predator, raise its quills, and lash out with its tail when necessary.

The porcupine’s quills become stuck in the animal if it strikes it with them. The animal’s body heat expands the barbs, allowing them to penetrate deeper into the skin. An animal’s life can be ended if it is stuck in the vital organs.

The porcupine isn’t a dangerous animal in the wild. It won’t attack unless provoked. Porcupines are no match for other creatures, such as the fisher. 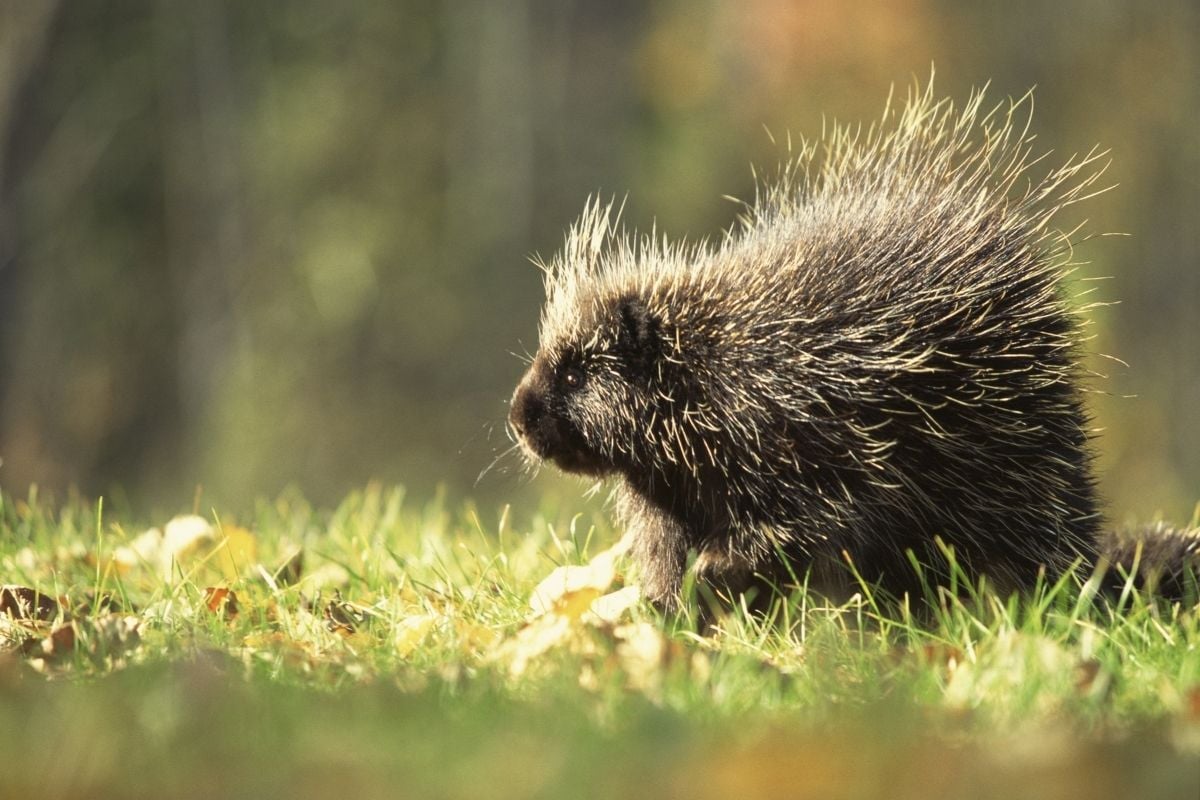 Coniferous, deciduous, and mixed forests are all suitable habitats for the North American porcupine. A scrubby area can be seen in the west.

However, in the winter, the porcupines of North America may gather in communal burrows to stay warm. It lives in caves, hollow trees, and decaying logs. Porcupines in North America do not go into hibernation, but they might choose to stay in their den during harsh weather.

The hollow quills of the North American porcupine help it stay afloat in the water. Tree-climbing prowess is another reason why it spends so much time up there. You can hear it grunt and groan and scream and whine and shout and even click its teeth when it is angry. 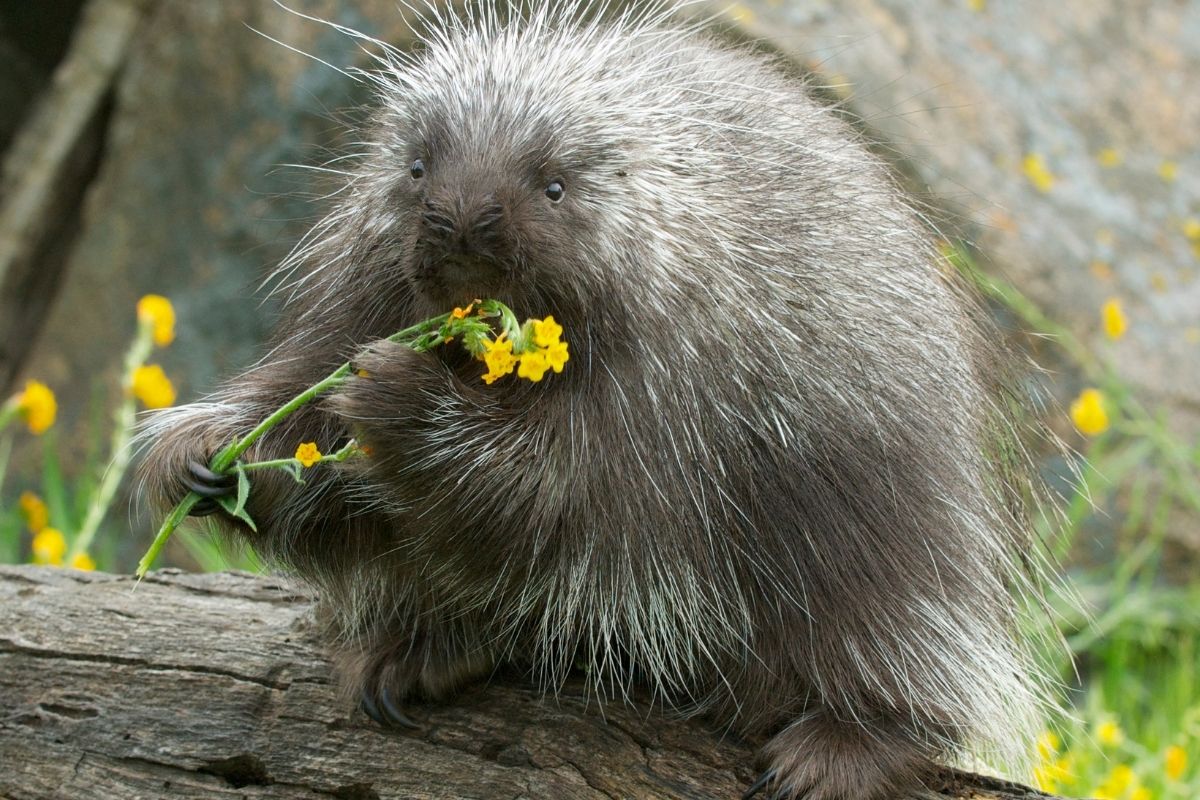 Herbivores like the porcupine eat a variety of plants. Skunk cabbage, as well as clover, are among the green vegetation it prefers to consume. These might eat bark in the winter.

It frequently scales trees in search of food. It is a nocturnal creature. However, the porcupine can occasionally be found foraging for food during the day.

Late summer through early fall is the time of year when porcupines pair. Throughout the mating season, porcupines make a lot of noise. Fights over porcupine females are not uncommon among men.

The man does an extravagant dance and then urinates on the female while she’s still wearing it. The female porcupine has a single baby seven months after mating. Quills are velvety after a baby is born.

They become brittle within an hour of being born. After only a few days, the newborn begins to search for nourishment. For the first six months, the infant will remain with its mother.