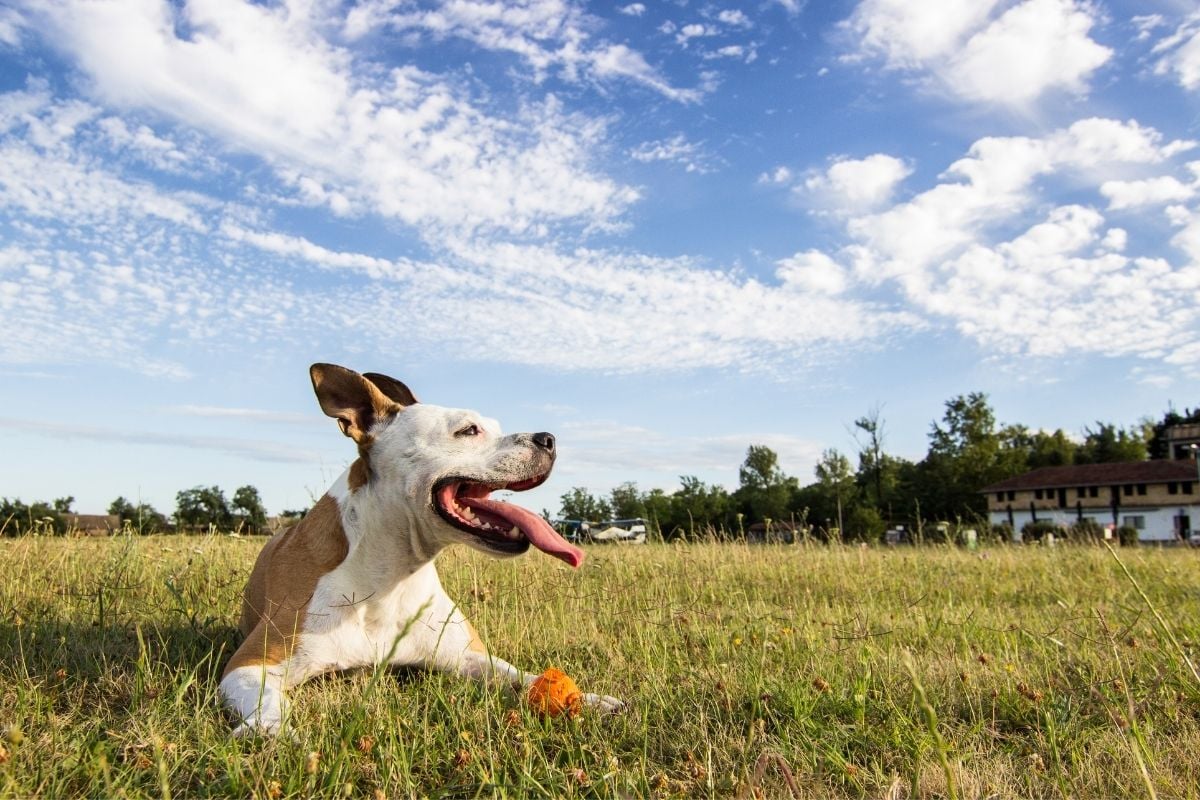 You love your Golden Retriever – there’s no doubt about that. You want to take him with you on hikes and jogs and any other outdoor adventure you seek. You also want to let him run free in your yard and enjoy being a dog, right?

Chances are, though, that if you live in an area where coyotes are present, you’re probably worried that all of this might put your furry friend in danger. And you’re probably wondering whether your Golden could win a fight if a coyote approached. Who is tougher: a Golden Retriever or a coyote?

The answer: well, it’s not as simple as the question. Coyotes and Golden Retrievers grow to about the same size, but – sadly – this doesn’t exactly level the playing field. It’s possible that your dog could win, of course, because anything is possible.

However, for all the reasons listed below, it’s best to never take that chance.

Contents show
Predatory Instincts
Daily Life
How They Hunt
Unmatched Capabilities
Will a Coyote Attack My Golden Retriever?
How Can I Protect My Dog?

Coyotes are natural predators – that’s just who they are. They survive on these instincts, which make them naturally aggressive. Golden Retrievers do not have those same aggressive characteristics.

In fact, they’ll rarely – if ever – attack someone or something. If they do, it’s typically out of protecting themselves or their humans. So, will your Golden Retriever fight a coyote if that coyote is threatening you?

Probably so. Will they win? Probably not.

It’s not their fault, though. As coyotes are hunters, they go straight for the kill. Specifically, they’ll go straight for a bite to your Golden’s throat if that shot is open – and that’s a pretty deadly move. If, by chance, your pup does win the fight, they’ll likely be severely injured.

You feed him, give him a place to sleep, take him to the vet when he’s sick, and so on. Life is pretty good. 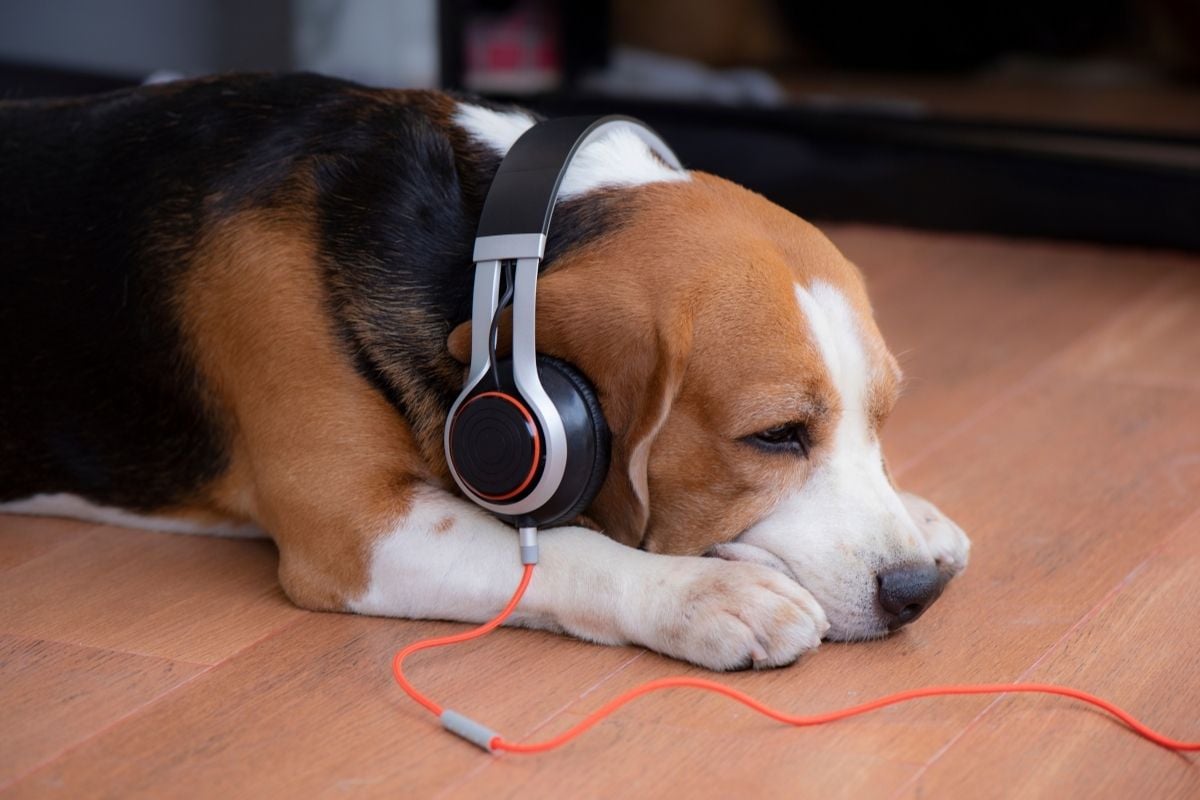 Coyotes, on the other hand, are scrappy little fellows – because they have to be. They have to hunt for food and fight to protect their packs. They don’t get vet appointments or cuddles.

Instead, they spend their days just trying to survive. Put yourself in their shoes. Imagine that, every single day, you are fighting for survival.

You only eat if you hunt down food. If you were in a fight with another being that was well cared for, who would win? Probably you, since you are constantly in that mindset and on guard. 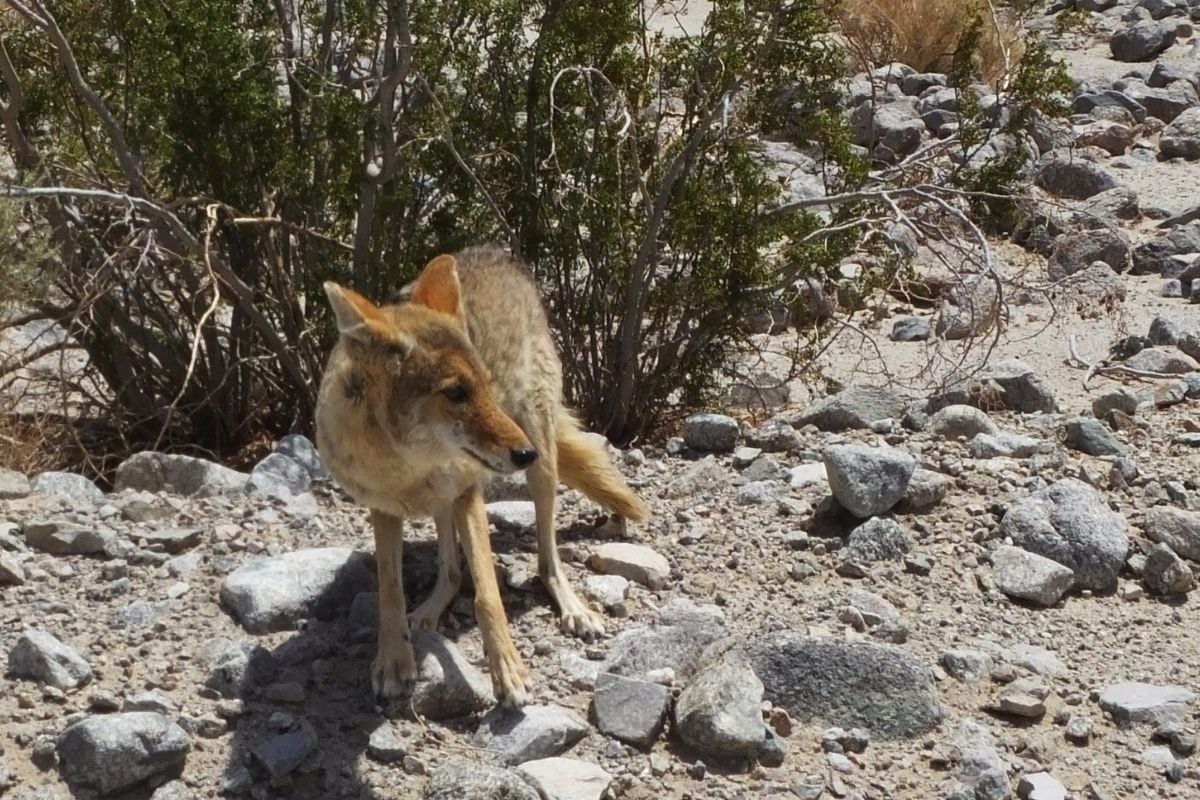 Coyotes live and hunt in packs. Chances are that if a coyote is close to you, it’s not the only one. In other words, if your dog is attacked by a coyote, his friends and family are probably going to join in.

In fact, they might even surround and corner your dog before the poor baby even realizes what’s going on. 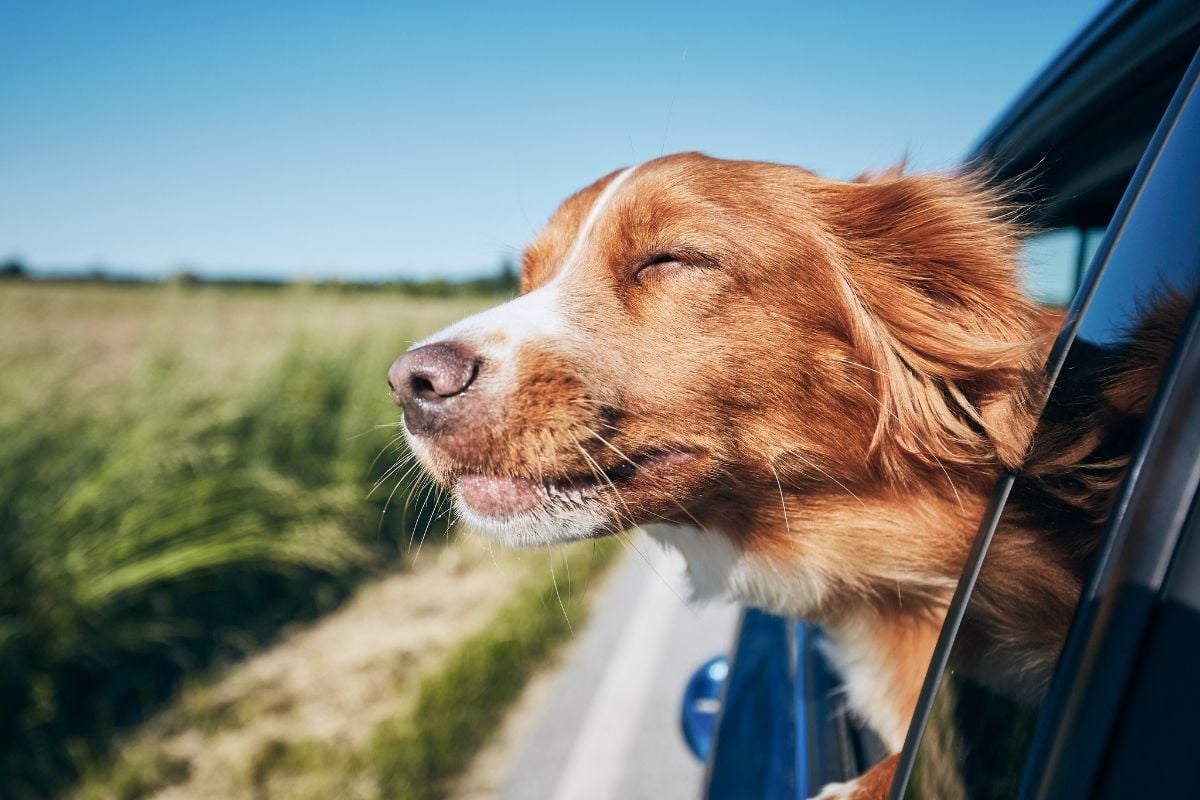 You, me, and everyone else who has had a Golden know that they have some pretty awesome characteristics. They’re fun, fiercely loyal, intelligent, cuddly, and compassionate. You can typically trust them to be great with little ones, and they’ll tag along just about anywhere you want to go.

Unfortunately, these characteristics don’t really translate well in a fight – especially not against a coyote. Coyotes can move quicker and lighter on their feet than Goldens. And they have night vision.

Okay, not really night comic book night vision, but they can see pretty well in the dark since they often hunt at that time. These characteristics kind of give them a paw up. So, who’s tougher: a Golden Retriever or coyote?

Well, in a competition between the two, toughness wouldn’t really matter. It’s more about the skills and lack thereof of each. It’s always fine to wish for the best, but chances are high that coyotes will be the top dogs in the fight.

Will a Coyote Attack My Golden Retriever?

Now that you know it’s probably not a good idea to bring a Golden Retriever to a coyote fight, the next question is how likely a coyote would be to attack your dog. This is, unfortunately, another hard question to answer.

Again, coyotes are predators, so they’re typically looking for food. However, if there is ever a time your dog’s size can help, this is it.

In most cases, coyotes would prefer to go after prey smaller than themselves – you know, the path of least resistance and all. So the fact that your dog is about the same size as a coyote just might deter them from attacking and send them in search of smaller prey.

Keep in mind, though, that these are generalities. If a coyote is hungry enough, feels threatened, or your pup seems to be standing between them and their prey, all bets are off. And if your pet isn’t fully grown yet, it’ll make for an easier target. Bottom line: it’s safer to steer clear of coyotes whenever possible.

How Can I Protect My Dog? 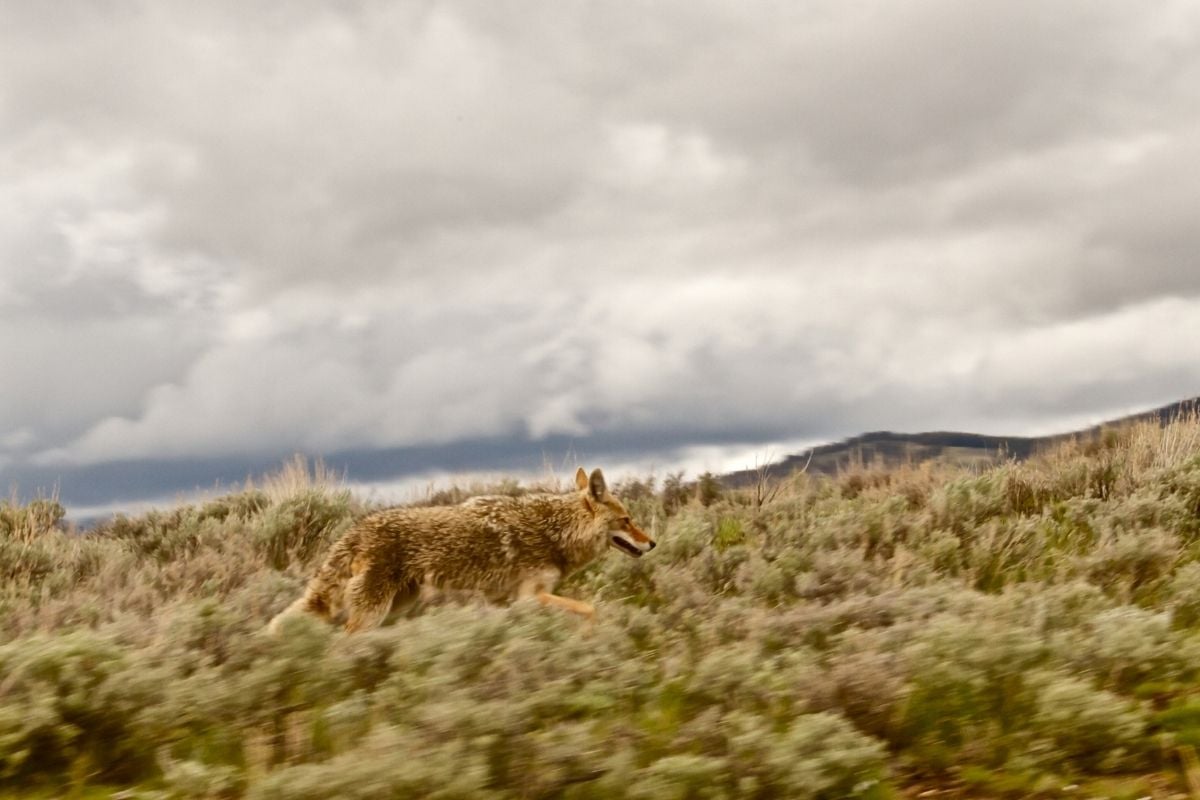 Assuming you’re not actively hunting coyotes – something best left to the pros – then there are some things you can do to protect your pup. For instance, it’s always a good idea to let your dog sleep inside at night, especially if you know coyotes are a problem in your area. Don’t assume a fence will keep them safe – unless it’s a really high one.

Coyotes can jump right over a small or regular-sized one. Also, you can make your yard less attractive by not leaving pet food, garbage, or other appetizing things around. They’ll sniff it out and have no qualms about encroaching on your territory.

And once in your yard, they might find your beloved pet a little too tempting to pass up. If you’re around when your dog is confronted by a coyote, some people suggest that you stand in front of your dog, letting them know to back down. Stand up tall and straight, and try to scare them off.

Loud noises usually do this, so if you have a gun in your home, you can shoot it up in the air. If you don’t, you’re supposed to yell – coyotes are skittish creatures. I’ll be the first to say that I would have a hard time not showing any fear at a time like this, but that’s what’s suggested.

What you should definitely not do is run, as this will provoke an attack. Also, don’t ever let your dog chase a coyote. They are sneaky and brilliant.

They’ll let your dog follow them – straight back to the coyote pack to be killed.