Flamingos do live in the rainforest, just not in the middle of it but rather at the edges. Close to lakes and estuaries where the rainforest meets the Andeans is where you’ll find Flamingos in the Amazon Rainforest region. Only two types of flamingos make their habitat on the outskirts of the Amazon rainforests and that’s the Andean and Puna.

The latter is the rarest Flamingo. Here’s a look at the different species of flamingos, those who live in the rainforest, and all the in-depth details you’d like to know about their lifestyle.

What is a Flamingo? 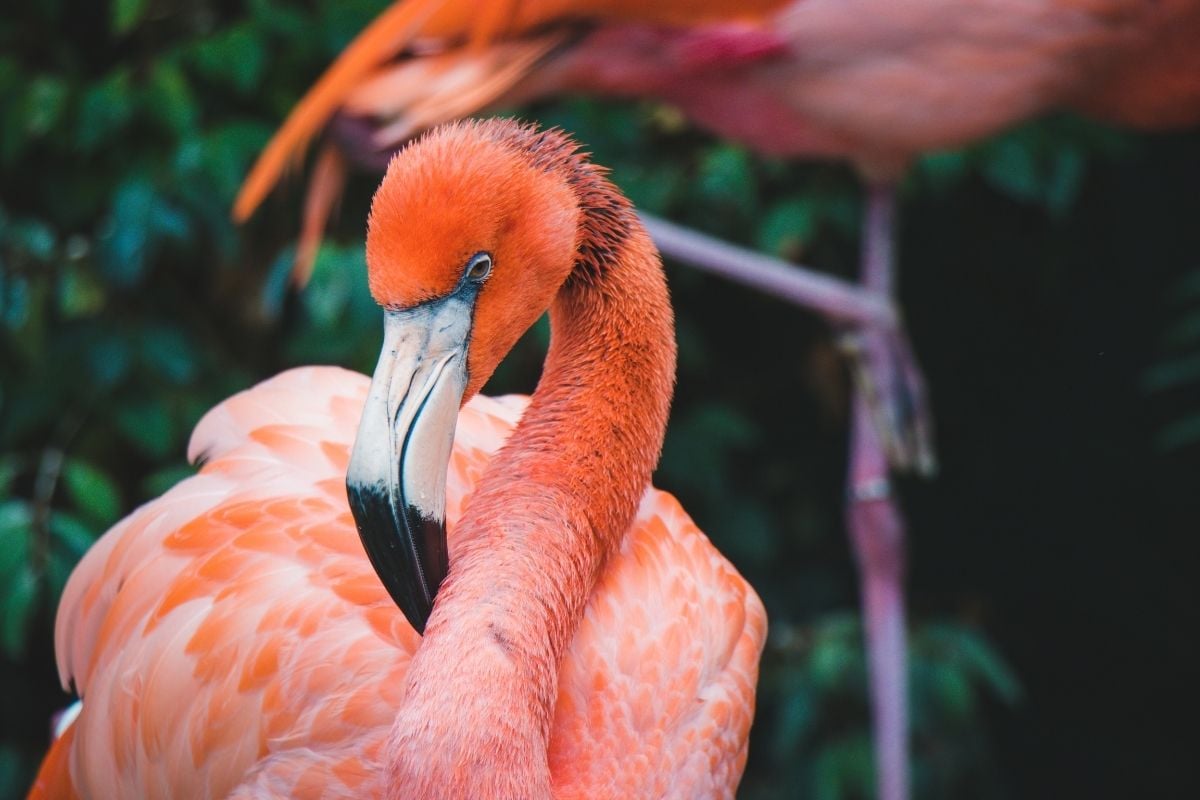 The flamingo is one of the oldest bird species remaining in existence. They stand out from other tropical species because of their unusual feeding habits and vibrant plumage. A common sight in zoos around the world, wild flamingos can be found in tropical and temperate locations, frequently near water and rainforests.

How Many Varieties Of The Flamingo Are There?

Flamingos come in six distinct varieties.There are also lesser, greater, James’ (or Puna), Chilean, Caribbean/American, and Andean flamingos. The tropical and subtropical regions of Africa, Asia, and Europe are home to the largest populations of flamingos on earth.

The largest and tallest Flamingo species. Only in South America can you find Puna and Andean flamingos. Of the six species, the Andean flamingo numbers less than 40,000.

In Africa and southern Asia, there are smaller flamingos. Among flamingo species, they are the smallest and most common. More than 2 million lesser flamingos flaunt their pink plumage, illuminating the skies and shorelines.

Flamingos Found in the Rainforest Region

While the Andean flamingo is slightly larger, the James flamingo is smaller still, being on par with the smaller flamingo of the Old World. It was Charles Rahmer, who was part of a collecting expedition financed by Harry Berkeley James, that first brought back a bird specimen of the species. Several species of flamingos live in the Andean plateaus of Peru, Chile, Bolivia, and northwest Argentina.

James’s flamingo is one of these species.

South America’s Andes highlands are home to a unique species of flamingo known as the Andean flamingo (Phoenicoparrus andinus). It was previously placed in the Phoenicopterus genus. Phoenicoparrus is a genus that includes both James’ flamingo and this species.

The long filtering filaments on the maxilla set it apart from other flamingos, which have a shallower lower mandible. When compared to the bigger flamingo, which stands more than three feet tall, it is the Andes’ largest and heaviest flamingo. 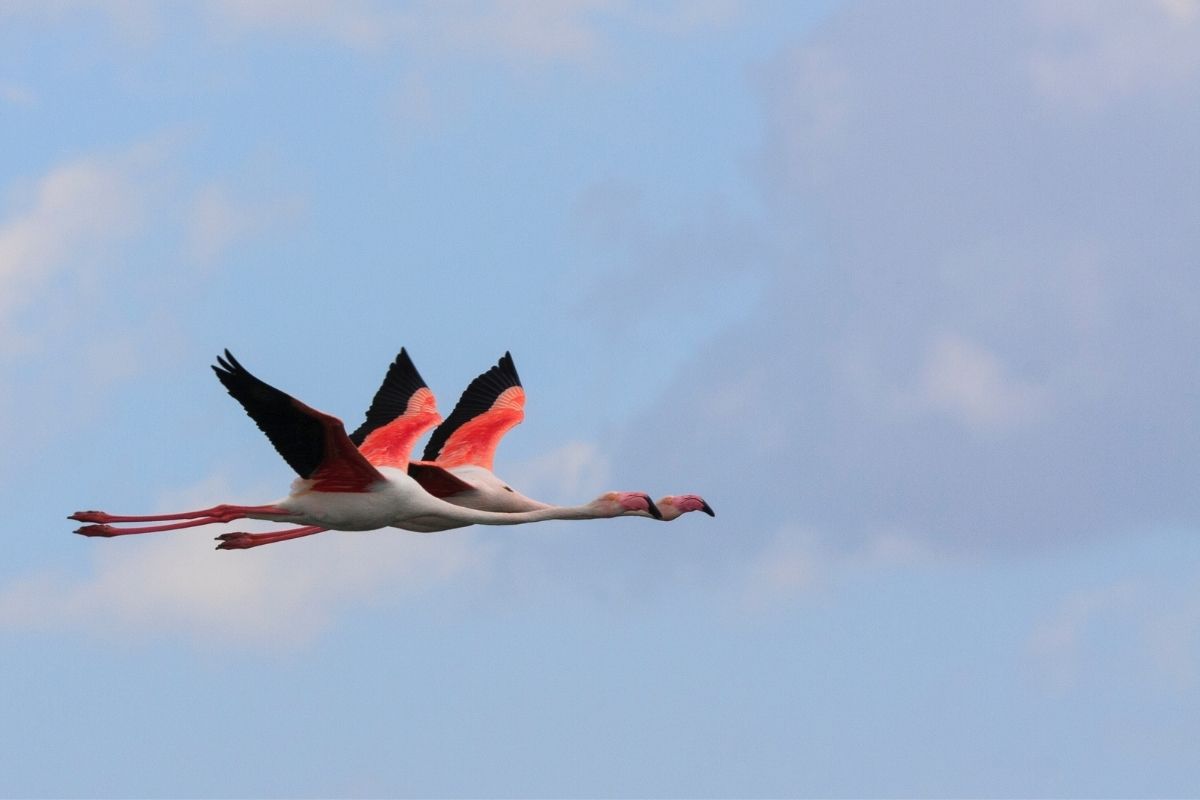 All flamingo species can indeed fly. The only black feathers on James’s flamingos are the flight feathers, making them easily distinguishable. They sprint a few paces, then begin to flap their wings, to take off.

When they’re ready to land, they go through the same process backward, and as they slow down and stop flapping their wings, they continue to run. Flamingos have been spotted flying at rates of up to 37 mph (60 km/h) while in a flock. However, they may not be able to maintain this level of speed over shorter distances.

Esophageal secretion is regurgitated from the bird’s crop in both James’ and Andean flamingos to feed their offspring. The prolactin secretion of each bird is different, and this is the main difference between the two. Parental feeding of the chick is possible for both parents, male and female.

As adults, flamingos are the most advanced filter feeders found in the avian kingdom. James’ flamingo has the best filter-feeding system of the species.

Tropical and temperate Africa, the Mediterranean region, India, the Caribbean beaches, the Andean highlands of South America, and the Galapagos Islands are just a few of the places where you might see flamingos. It doesn’t matter if the salt lakes or lagoons are near the coast or far inland; the six flamingo species, James, lesser, greater, Andean, Chilean, and the Caribbean, cluster around them. Even in volcanic soda lakes, which are thought to be uninhabitable by most animals, lesser flamingos can survive.

Flamingos eat mostly algae and invertebrates like mollusks in the jungle. The lengthy legs of flamingos help them to look for food in deeper water. A flamingo sucks water and mud through the front of its bill, and then gushes any undesirable particles out the sides, to find a meal.

Bird lamellae, which are briny plates on the sides of their bills, act as a filter to keep the edible parts in their bills, as per the San Diego Zoo. The flamingos’ vibrant pink, red, and orange coloring is due in part to the foods they consume, including shrimp and blue-green algal blooms.

Flamingos tend to stand on one leg while in the water, which has been recognized by scientists and spectators. Saint Joseph’s University of Philadelphia researchers believe this is a way to keep their bodies warm, as reported in a BBC piece from 2009. Even in temperate or tropical settings, a bird’s body temperature could be dangerously lowered by submerging both of its legs in the water.

Flamingos are very gregarious birds that gather in large groups and build close relationships in groups of two. The flamingo’s mating season is unpredictable due to the unpredictable rainforest nature as well as other areas where they live. Resources and weather can change.

According to a 2007 study at Davidson College, they believe rainfall causes coupling and displays. Both genders are monogamous, and each takes turns guarding and preserving their nest. This is one of the flamingos’ unique characteristics.

Mud is used to build flamingo nests. An adult flamingo lays one big egg in its nest made of mud, which is shaped like a miniature mud volcano. Flamingos are solitary creatures who stick together as a family.

Both contribute to the nest’s construction and the egg’s incubation. Downy white-gray feathers and straight beaks are typical of flamingo chicks. Getting their trademark hook-shaped bills as well as the pink color takes a long time.

See also  Coyote Packs: How Big? How Do They Function Together?

Flamingos have been a part of the Smithsonian National Zoo from its inception over 13 decades ago. Since the early ’90s, flamingo breeders have received over 120 chicks into the world!

Why are Flamingos so Pink? 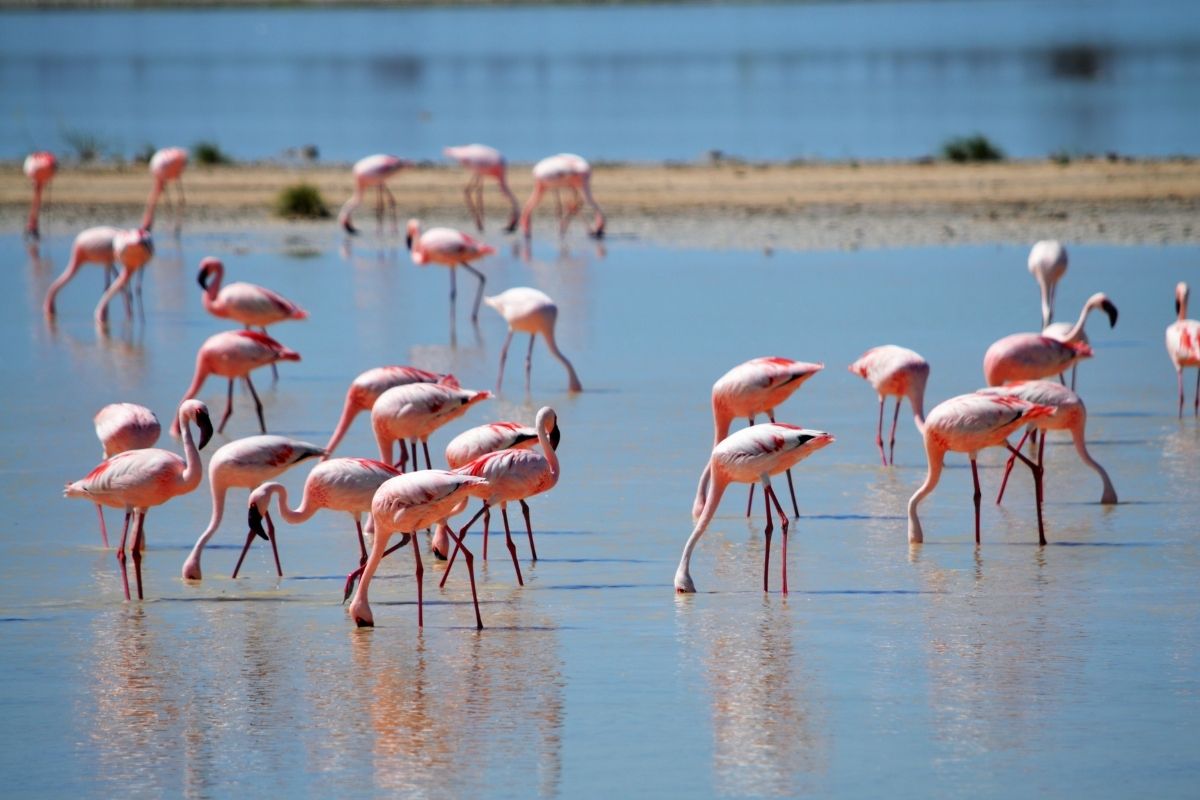 What flamingos eat determines their color. Carotenoids are naturally occurring pigments found in many plants. Carotenoids are the pigments that give the orange shade to carrots or the redness to ripe tomatoes.

They can also be found in the microalgae that brine shrimp consume. The colors in brine shrimp and algae are metabolized by the flamingo’s body, resulting in its pink feathers.

Why Do Flamingos Eat with their Heads Turned Upside Down?

There are several types of filter feeders, but flamingos are one of the most well-known examples. Among their prey are microscopic crustaceans (such as brine shrimp), insect larvae, and more organisms that reside in shallow waters, such as algae. Whenever it’s mealtime, the female of the species will turn her head 180 degrees and point her beak at her toes in anticipation.

It then performs a side-to-side head swivel while pumping water into and out of the bill with its tongue. As water rushes out, food is trapped in the bill’s comb-like plates, creating a filter.

Can we Keep Flamingos as Pets?

Keeping flamingos as pets is unlawful in the first place. Special permissions are extremely expensive to maintain even if you get them. It is quite difficult to feed them in a way that is as close to their natural environment as possible while supplying them with the wide variety of foods that they are accustomed to.

As a pet, they have the potential to become lethal. There is nothing quite like observing a flock of flamingos in their normal surroundings for sheer enjoyment.