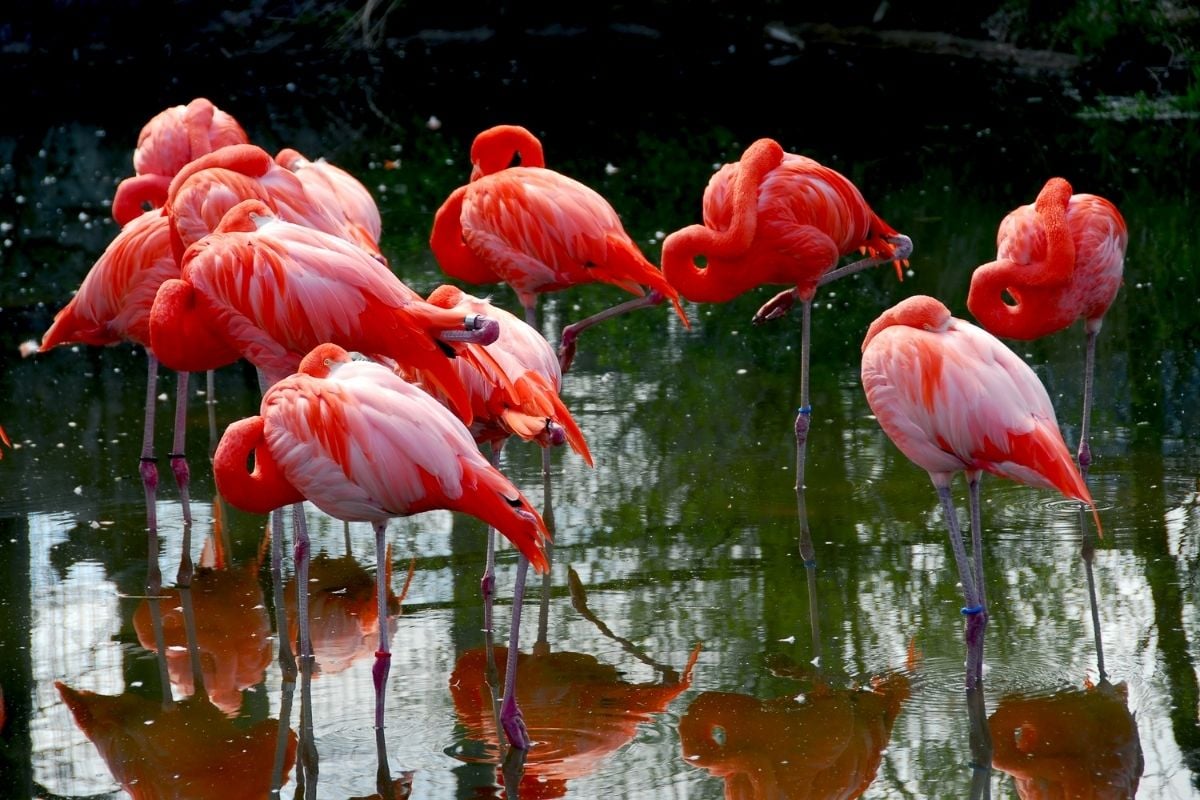 Flamingos are one of my favorite birds. They’re so graceful and their color palette is simply stunning. However, I was recently surprised to find out that not all flamingos are pink.

There are several different types of flamingos, each with its unique color scheme. If you’re curious about flamingos and want to learn more about their coloration, this article is for you!

Contents show
How Flamingos get pink skin
Can flamingos be other colors?
Where do flamingos live and nest?
How many flamingo species are there?
Can flamingos fly? And if so, how high?

How Flamingos get pink skin 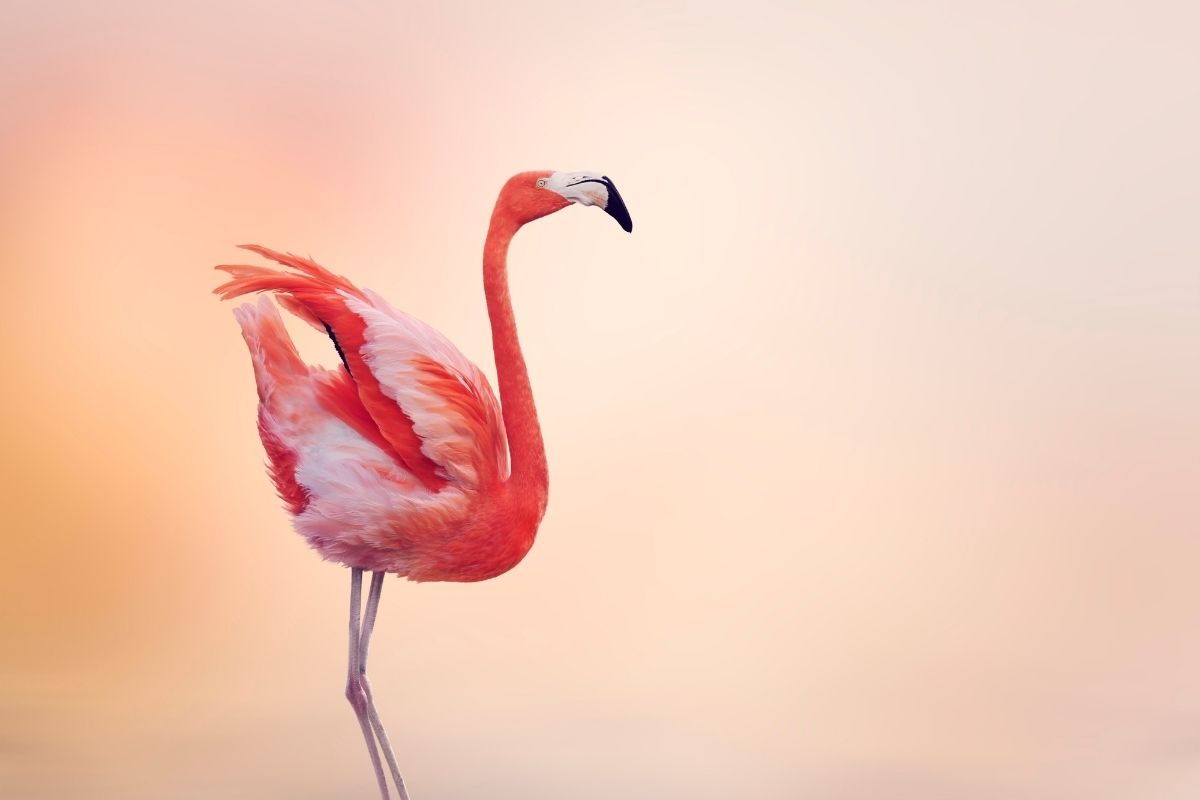 A flamingo’s pink skin is not a hereditary trait – this means that they were not born pink. According to expert Zoologists, flamingos are born white or dull grey. So how do they get their pink skin?

Well, it’s primarily caused by their diet. The food that they eat – algae, brine shrimp, and brine fly larvae – contains high amounts of carotenoids. These are the pigments in plants and certain sea creatures that give them their bright orange, yellow and red colors.

Once the flamingos consume these plants, the pigment is metabolized inside of the digestive system – turning their body and feathers pink. Some flamingos are brighter in color than others. This is primarily due to the amount of carotenoid-rich food they consume.

With that being said, the Caribbean flamingo is the brightest. In the Caribbean, carotenoids can be found in abundance. A fun fact to know is that flamingos eat upside down.

The reason being is because it has evolved to do so. Its top bill (beak) functions as a bottom bill and vice-versa. So, in other words, its bottom bill is much larger and stronger, so it has to turn its head upside down to eat to accommodate that.

This is the complete opposite of any other bird. They have long legs that allow them to wade in deep water to look for food. Once they find an area, they take their feet and stir up food from the bottom of the water – then dunk their head in to eat.

They use their tongue to filter out water or any other thing they don’t want to eat.

Can flamingos be other colors? 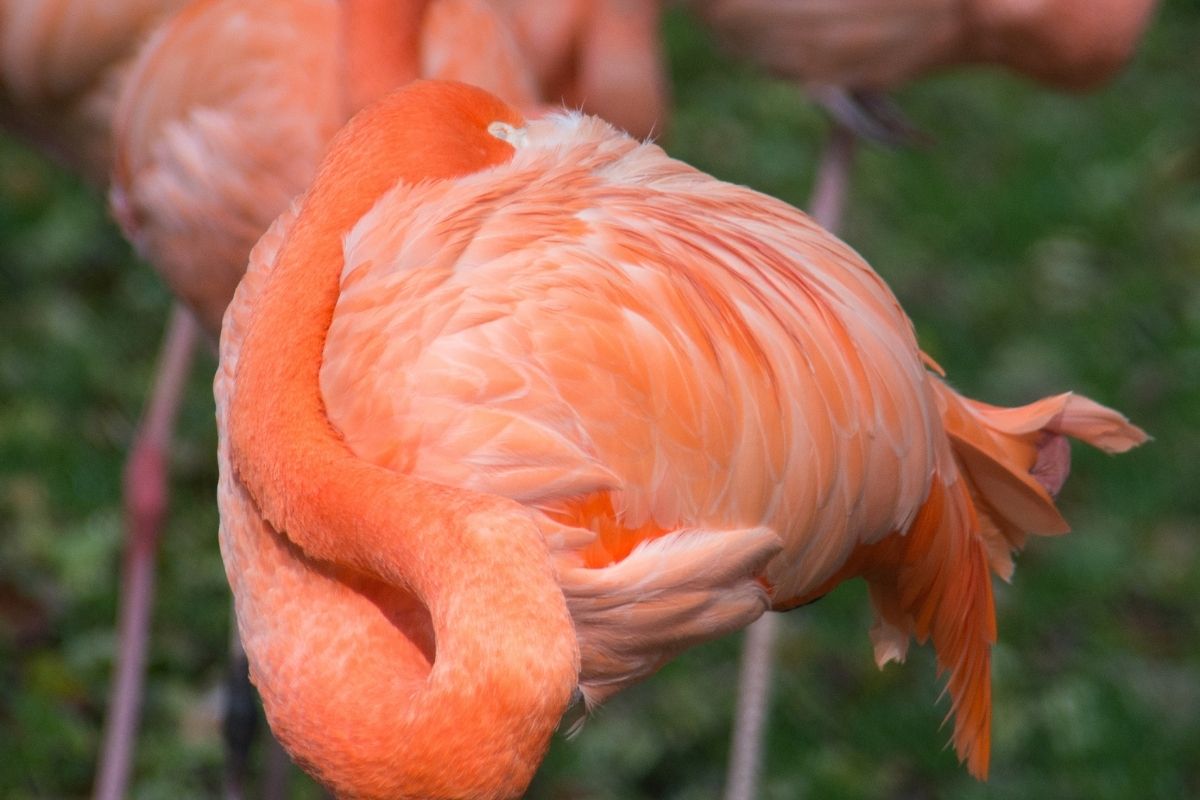 The feather colors of a flamingo vary with species. Some can be bright orange, while others can look pale pink. Their feet vary in color as well, from pale white to bright crimson.

I remember vacationing in the Caribbean and seeing a flamingo with a pale body and black-spotted wings. In this case, it was more than likely an albino flamingo. They exist but are extremely rare. There are no cases of flamingos being any other color, so if you see a picture of one being blue, purple, yellow, or fully black it’s been altered to look that way.

Also, flamingos have been known to change color a bit for many different reasons – slightly lighter when they’re not eating well – or a brighter pink when they’re mating. Flamingos, like many other birds, have a mating dance. The mating dance is performed by both males and females in a group setting.

The mating dance involves them twisting their heads, preening, raising their wings, shuffling their feet, and shouting out a mating call over and over again. To attract a mate, the females apply “makeup” which acts as another layer of seduction around mating season. Similar to all birds, a flamingo’s tail contains glands that produce oil.

This oil contains carotenoids that they spread onto their wings using their beak. This gives them a brighter pink or crimson color that is attractive to the males and also lets them know that the female is ready to breed. After their chicks hatch, the birds’ wings turn to a lighter pink because they have stopped applying “makeup”.

Where do flamingos live and nest? 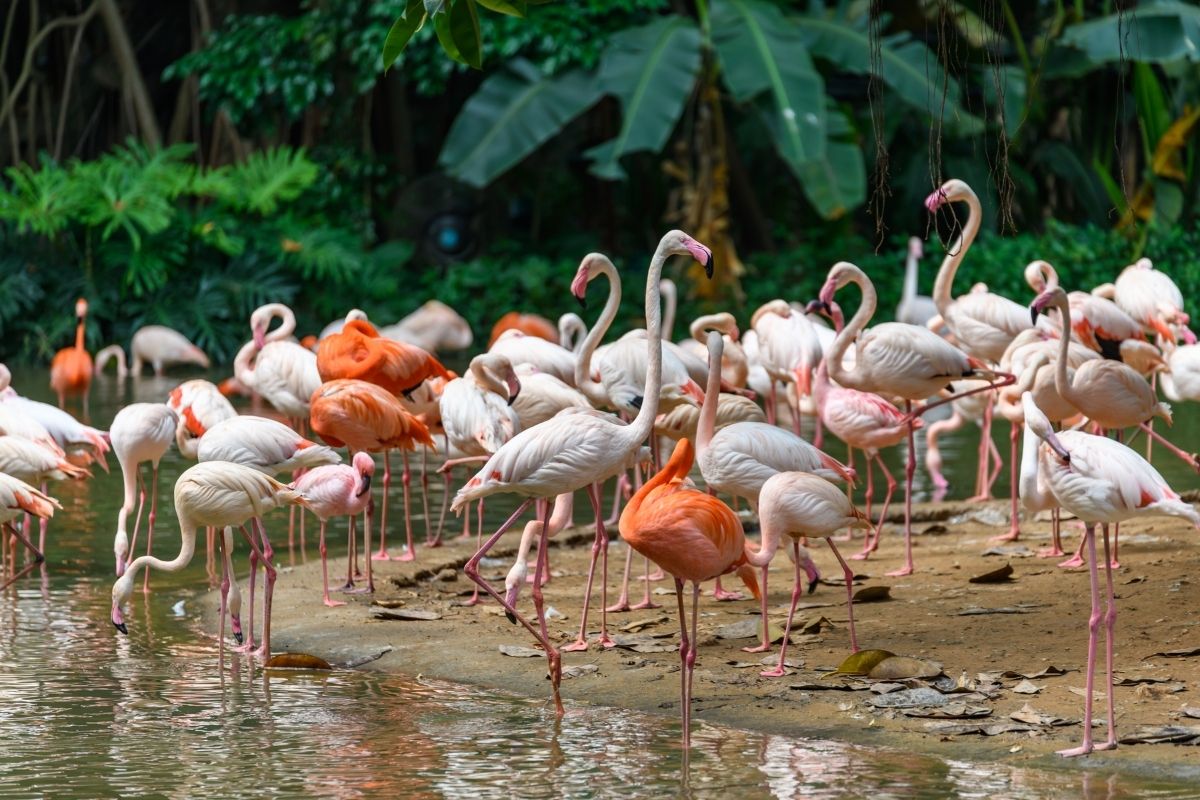 Flamingos live all over the world. Depending on what species of flamingos they are – they can be found throughout the Gulf Coast of America, Africa, Asia, Europe and parts of the Caribbean. Flamingos breed in lagoons.

A lagoon is a shallow body of water separated from a larger body of water. The separation can be caused by several things, such as a narrow landform, barrier peninsulas, barrier islands, isthmuses or reefs. These lagoons are where they build dome-like nests of mud to keep their eggs above the water.

The female lays only one egg and both parents take turns sitting on the egg to keep it warm. After about 30 days, the egg hatches. Baby flamingos (chicks) are born white with straight beaks.

As they grow and mature, the bill gradually curves downwards. Both parents feed the chick with a fluid called crop milk, produced in their digestive system until it’s old enough to go out with other young flamingos and look for food on their own.

How many flamingo species are there?

Can flamingos fly? And if so, how high? 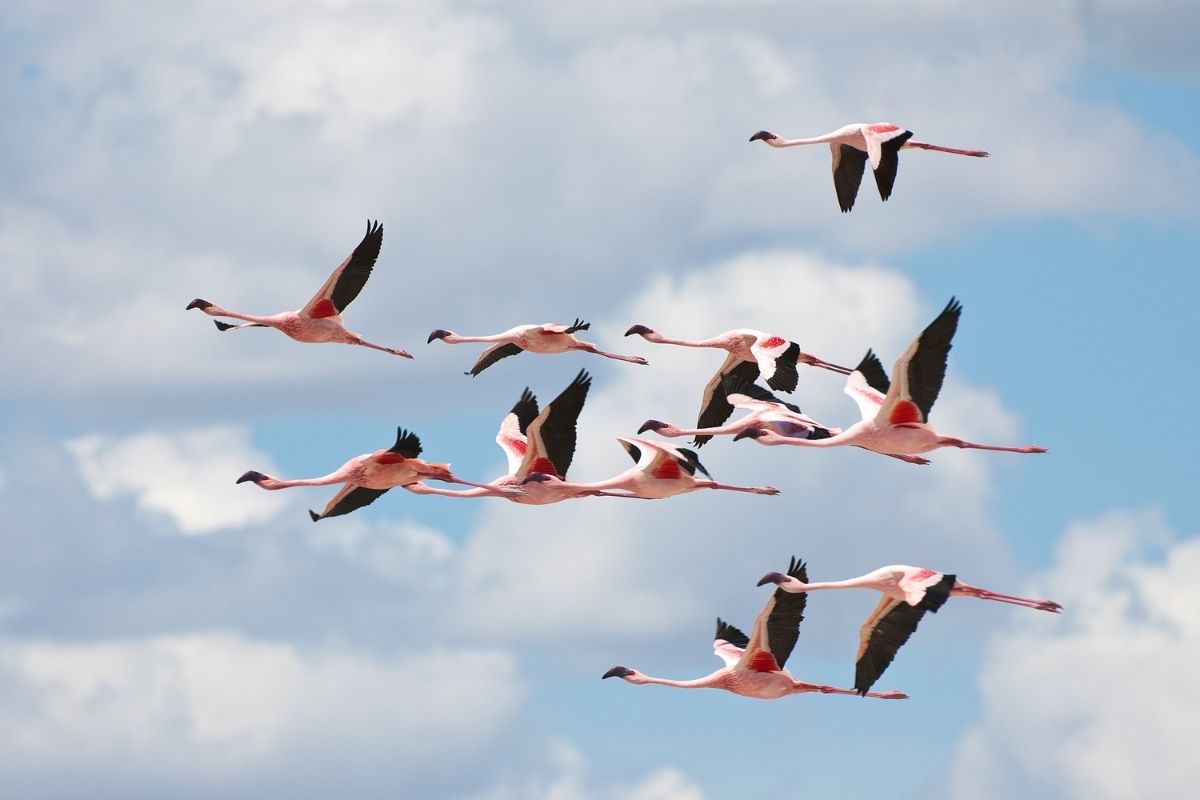 Although flamingos spend the majority of their time on the ground, they can indeed fly. They are known to have an average flying speed of 35 miles/hr. When they’re flying long-distance, they can fly upwards of 40 miles/hr.

This, of course, varies according to wind conditions. The longest flamingos can fly is up to 375 miles/hr in one night, and the highest they can fly is about 15,000 feet. Although they can fly that high, they are commonly known to fly around 10,000-13,000 feet.