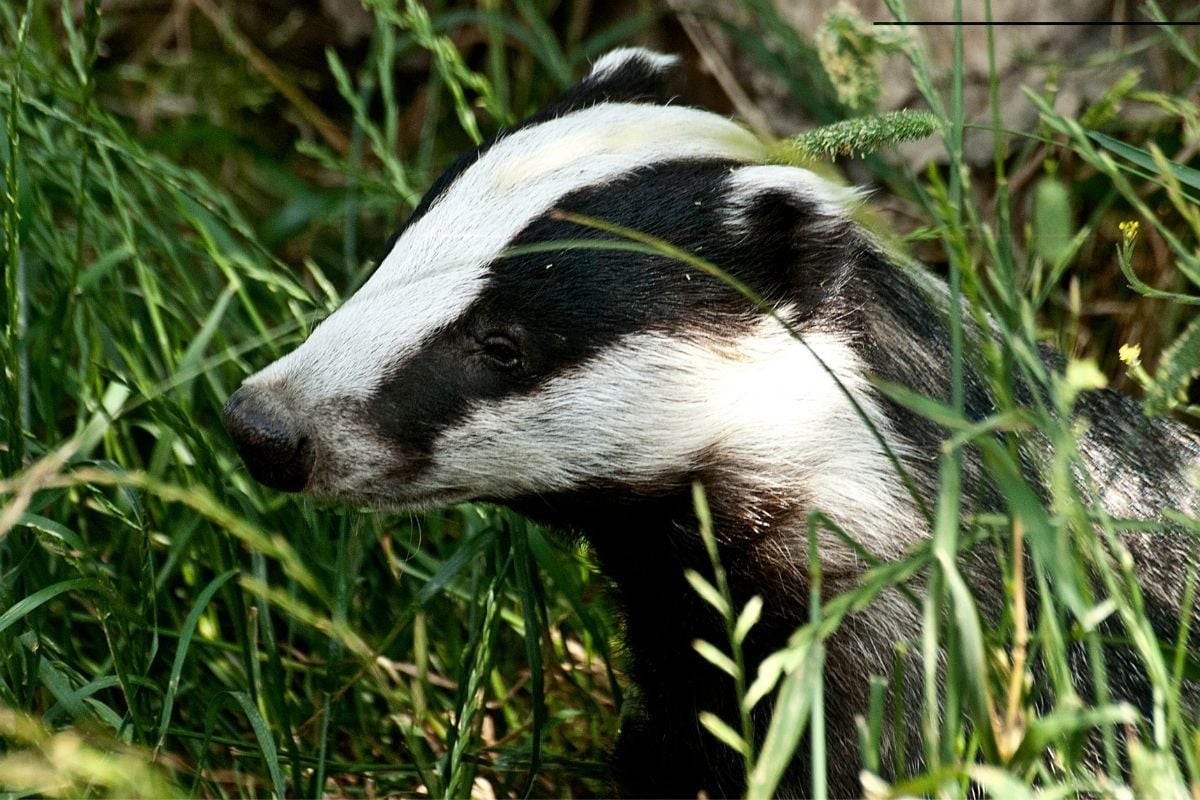 Despite the sweet name, honey badgers have a salty personality. They are aggressive and have a scent defense mechanism. If that wasn’t enough to deter you from wanting one as a pet, they are also illegal to keep.

Even if you did manage to kidnap one, it wouldn’t last. Honey badgers are known for their sleight of hand escapes.  I first discovered the honey badger from a viral video over a decade ago.

It was a nature capture with a documentary feel of a honey badger interacting in the wild with a hilarious voiceover. The world was introduced to the honey badger in the best way possible, putting a little comedic relief on a sort of terrifying animal. But before we get too far down the smack talk road, let’s learn a little bit more about these fearless protein lovers.

Contents show
About the Honey Badger
Most Fearless In The Animal Kingdom
What else makes honey badgers bad pets?
Scent Glands
Hot and Cold
Stretching Room
Can’t Be Domesticated

About the Honey Badger 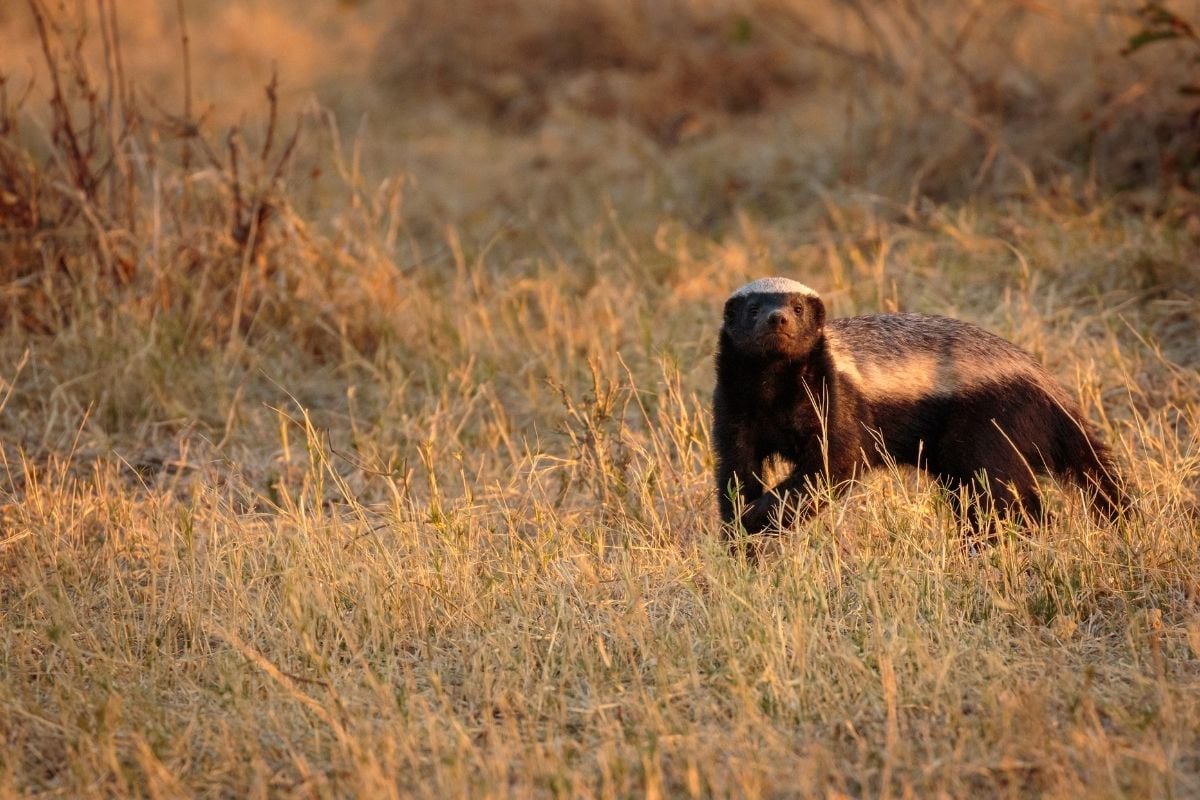 Because every animal is cute and innocent as a baby, let’s go back to the beginning. Sometime around 5,000,000 years ago, a carnivore in Asia evolved into what is now referred to as the honey badger. His ancient relatives had become extinct by this time and he was kind of alone as a species.

Perhaps that’s where the perpetual chip on his shoulder comes from.  Today, there are 12 honey badger subspecies that are spread out across two continents. So, he took his anger and let it multiply.

If you are on the hunt, you might run across one or nine in parts of India, the majority of Africa, and the Middle East west of Iran. Also, for some reason, Turkmenistan. Another misdirection about the honey budger is that it’s not a badger.

In reality, it’s more a weasel than anything else. Although to look at the two, you might see a resemblance to the Tasmanian devil in both appearance and name. Some might say a Tasmanian devil with an atrocious haircut, but I digress.

Most Fearless In The Animal Kingdom 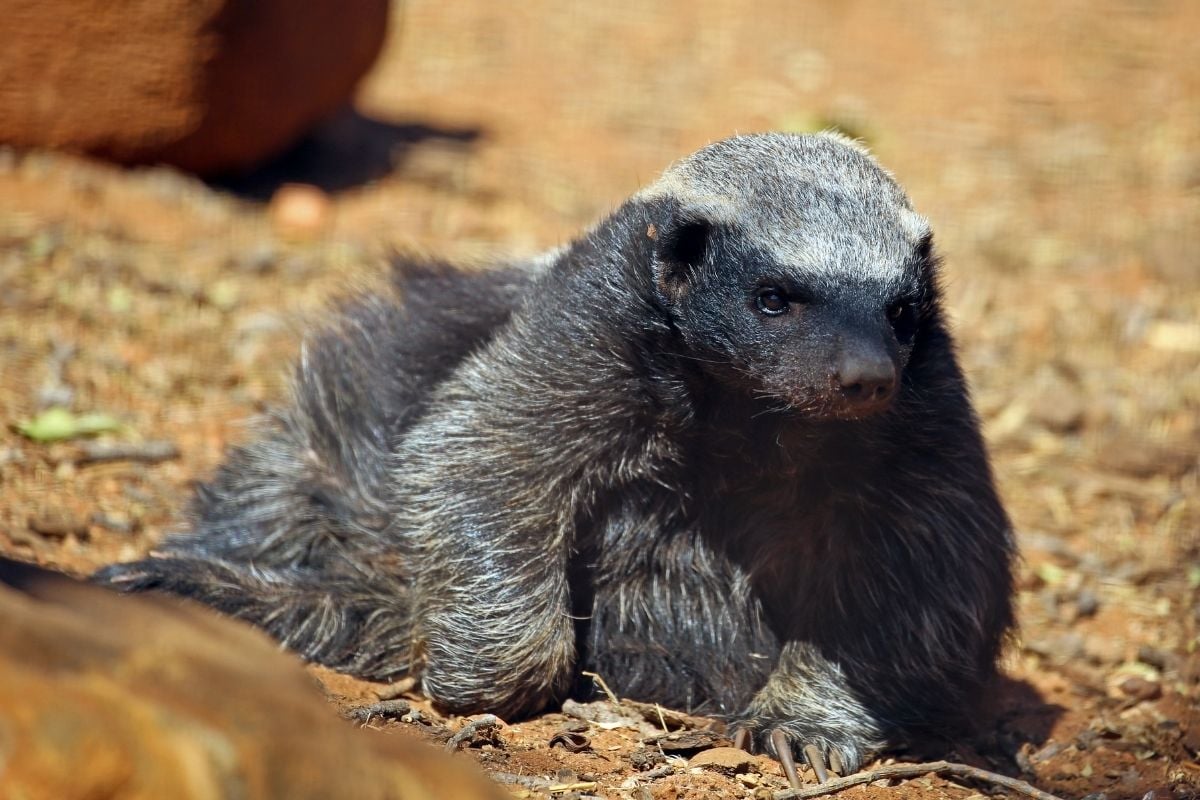 While the honey badger is the largest terrestrial mammal of its type, the total height maxes out at about 11 inches. That’s roughly the size of a dog on the smaller size. I’m pretty sure no one ever relayed that information back to the honey badger. However, they have absolutely no chill when it comes to hunting down some meat.

The ratel, as they are also called, have been known to attack animals far beyond their reach. This is why they are viewed as the most fearless, they really could care less if something is beyond their scope of abilities. Surely they were an inspiration for the popular quote, “You can do anything you set your mind to.”

You shouldn’t be shocked to see a honey badger running after a wildebeest, zebra, or even a lion. Evolution tells us that animals get smarter and more strategic over time. So, it seems strange and sort of dumb to see an animal the size of a lapdog trying to take down a lion, right?

Well, it really is all about strategy. The idea here is that he is wreaking havoc with wounds on these big animals in the hopes that they will eventually succumb to their injuries. Then, he can take whatever he likes from the carcass.

That raises another question. How does an animal that weighs, at most, 30 pounds hurt another animal that’s over 400 pounds? Glad you asked.

If you’ve ever seen a sloth’s claws, you know that they are kind of fierce. You might be intimidated if they weren’t so slow and docile. On the other hand, honey badgers have relatively small claws, under two inches.

However, they are Wolverine strong, and when combined with their incredible set of teeth, they are able to apply enough pressure to break a tortoiseshell. Honey badgers were built to be tiny, tenacious killers. They have thick skin, unfathomably strong jaws, and those painful teeth and claw combos.

With all that power wrapped in a small package, it can inflict a world of issues on an unassuming prey possibility. No matter how big. 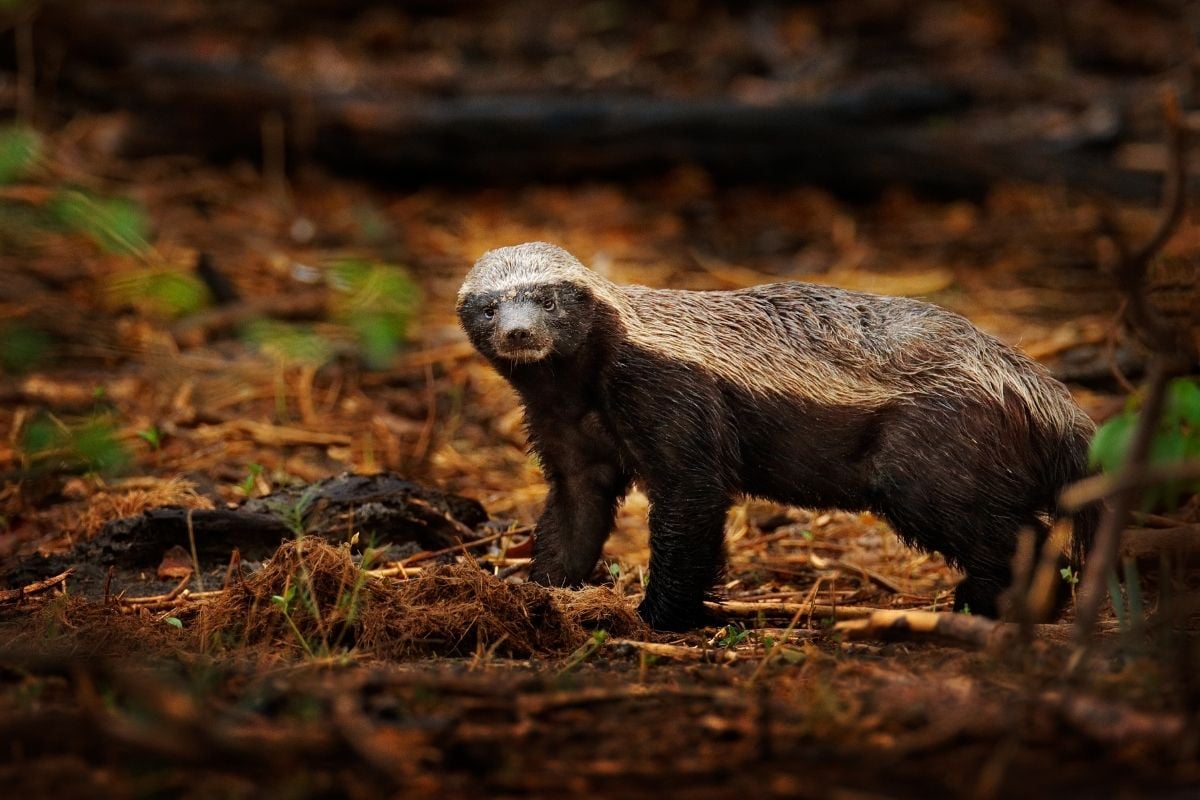 Another animal honey badgers share traits with are skunks and in the worst way. At least skunks express their scent glands when they are scared and trying to defend themselves. Honey badgers don’t need to be frightened to let it all out, they might just want to get you to leave so they can take your food.

At least that’s what they do to bees. Their stink is just another trick from their bag of small animal workarounds. So, if the claws and teeth haven’t done you in, surely the official knockout moment is the odor.

Honestly, I’m not sure how other honey badgers put up with honey badgers. They are kind of lawless, reckless, and crazy animals.

Speaking of psychosis, ratels are also sort of bipolar. Their human equivalent would be a child prone to temper tantrums who goes back to being completely normal once they get what they want. Honey badgers do not want to be surprised and will charge aggressively if they are.

Whether it’s an unexpected item or noise, they do not appreciate being thrown off their groove. After their moment of rage has passed, they act oblivious to any such meltdown. Who bit you? Surely not the innocent honey badger.

Not sure who would need a ton of land the most, you or the honey badger. On one hand, they require lots of room to run and be sneaky. On the other hand, that’s how much room you’ll need to run away from them when they come after you.

No one is safe.  On that large plot of land, you’ll also need a multitude of items for them to use, as well as shelters. These animals are used to hotter temperatures.

To keep them happy all year would take an exorbitant amount of effort since they clearly can’t stay in the house. Making sure they are comfortable would take enclosures with heaters for autumn and winter. Essentially, they need their own estate.

Even if you could supply them with enough property to make any grown person jealous, the reality is they just aren’t into you. Or any other human. Honey badgers will always need to be wild animals because of their instinctual behavior.

See also  Coyote Packs: How Big? How Do They Function Together?

They don’t have the ability to be trained or see people for anything more than a way to another meal.  Speaking of meals, if you had to feed your own honey badger, an interest in large insects and reptiles for feeding would come along with it. While they are motivated enough to pounce on a giant cat, their diet typically consists of beetles and scorpions.

These furry mammals are also smart. If that enclosure existed, they would use whatever means necessary to break out of it. If they can’t grow to love you, attacks, meltdowns, and foul smells will be all your future can hold.

They aren’t meant to be caged birds, they are hunters with their own purpose.