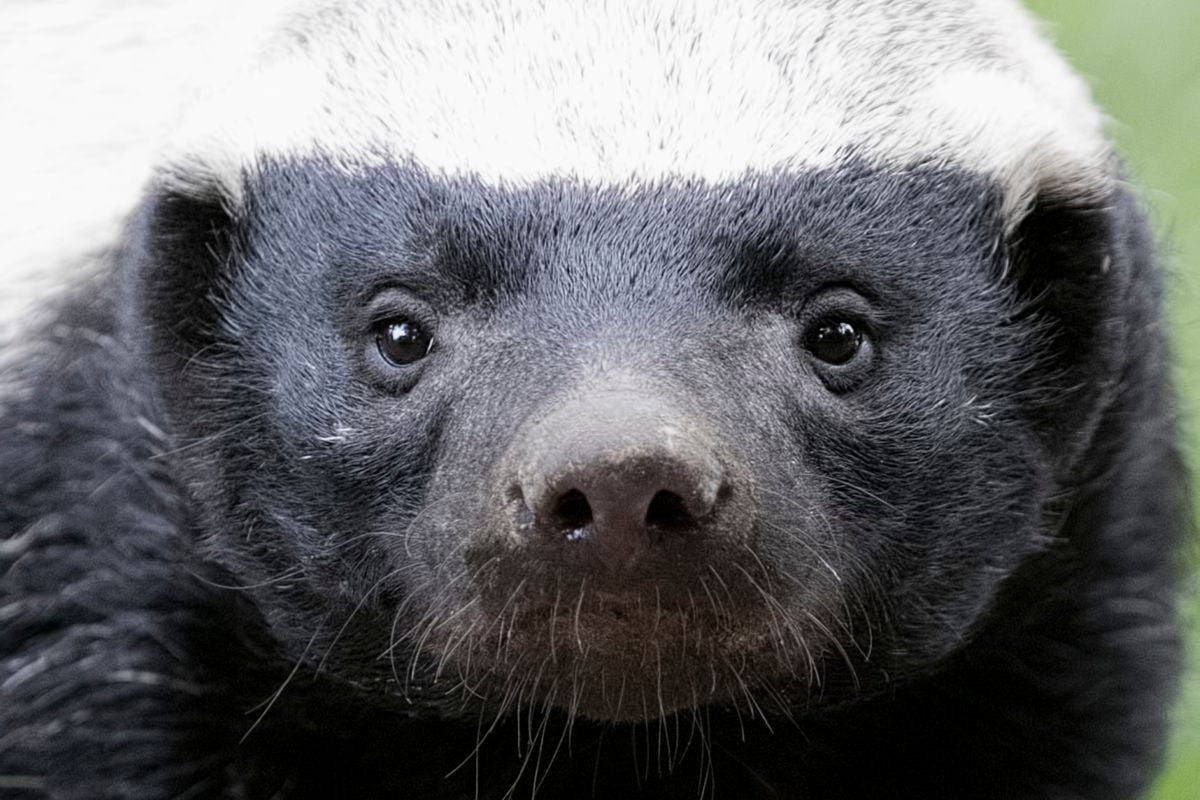 The honey badger (Mellivora capensis) is an omnivorous mammal originally from sub-Saharan Africa and fond of living in dry grasslands. The honey badger, also called a ratel, is a strong animal and, like all badgers, has a flattish body with short, cobby legs.

Its large, powerful front claws and feet are entirely adapted for digging. 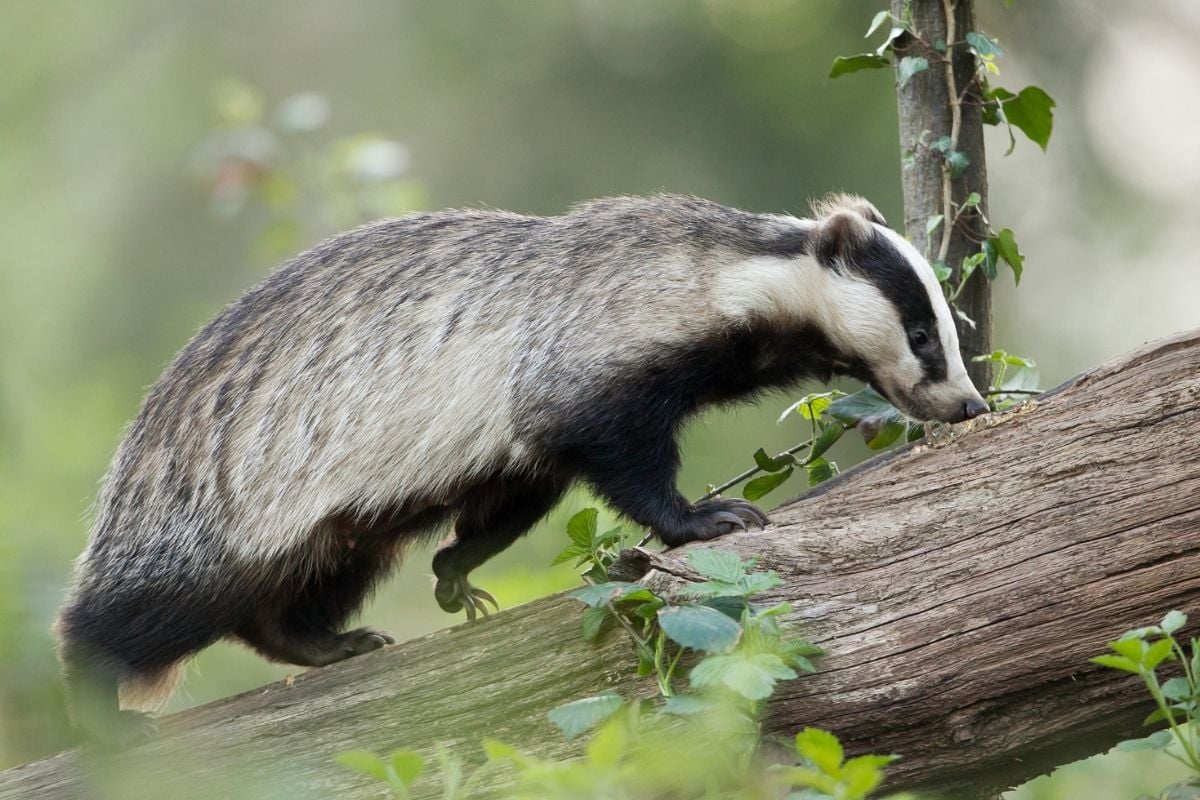 The honey badger has a thick coat of coarse black hair with a broad gray stripe along with its head and back. Like another animal whose fur looks like that, honey badgers can use scent as a defensive weapon against a larger predator. Some scientists think this stench can also be calming to bees, making it easier for the badger to raid hives.

The fur and skin are incredibly loose, allowing the badger to turn and bite an attacker holding its hide. Honey badgers not only deliver a pretty mean bite, but they’re also relatively fearless – with reason – of the bites of others. They enjoy eating scorpions and snakes and have an unusual level of immunity to the venom.

Thus, even when bitten, the honey badger walks away from a confrontation that might have killed another animal.   Honey badgers usually only have one or two cubs at a time. Their nocturnal nature, secretiveness, and overall charm mean that we don’t know much more than that about their breeding.

As a member of the weasel family, the honey badger is related to skunks, otters, ferrets, wolverines, and other badgers. Its common name is honey badger because of its habit of digging in beehives, but it was actually looking primarily for high-protein bee larvae, not the honey!  The badger’s range includes much of southern Africa and Asia, from Morocco to the Caspian Sea and the southern tip of Africa.

They live primarily in dry areas but also like forests and grasslands. Good swimmers, they can climb trees and are primarily nocturnal. The honey badger eats small birds and mammals and the young of larger mammals.

It also eats reptiles, snakes, insects, and scorpions, being immune to venom, as well as some carrion and even the occasional piece of fruit. 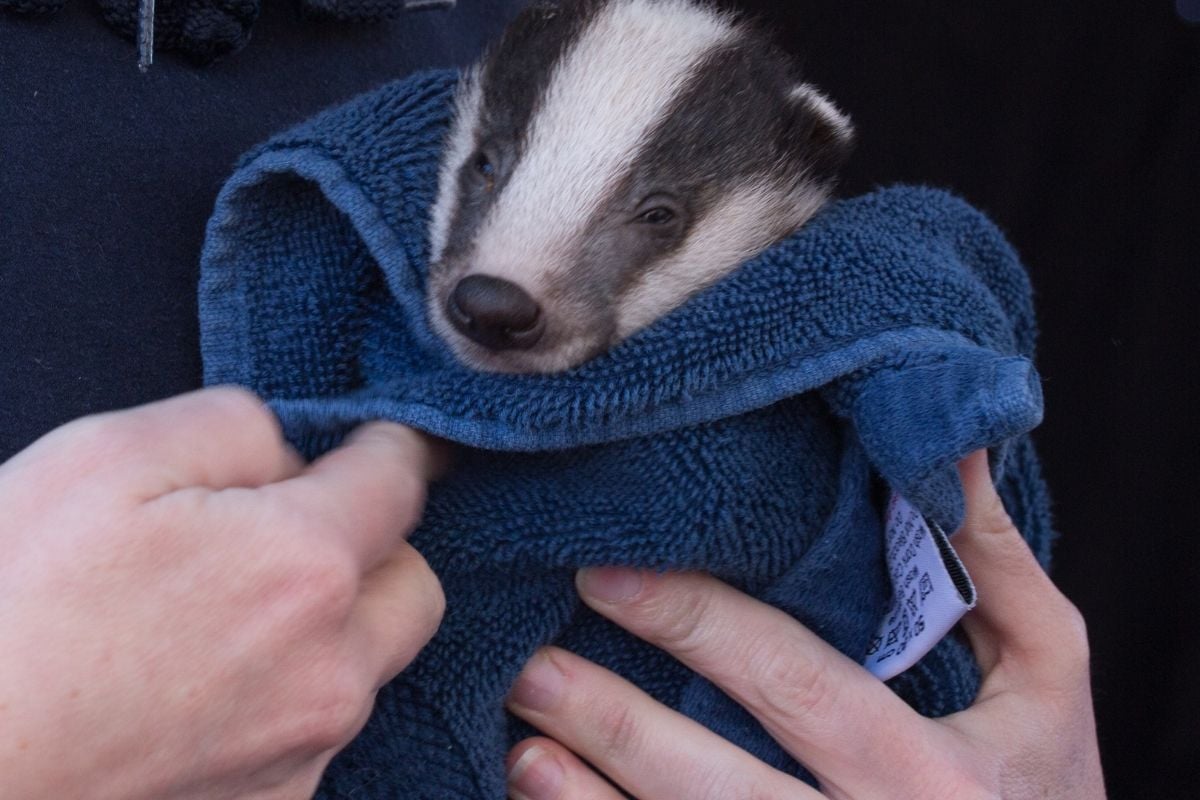 Honey badgers are quarrelsome, grumpy, and not in the least cuddly. It generally wins any fight it starts and can be a formidable opponent. It can, as we said, bite an attacker holding its neck and has a massive skull and musculature, strong teeth, and a more pungent stench.

Not really something to curl up on the sofa with. Not only is the honey badger not a cuddler, it is a powerful and fearless fighter that will likely attack you, your kids, your other pets, and even your next-door neighbors. They do not like being confined and will go on trying to escape for years.

They are, like many predators, highly intelligent and known to open doors and locks. Some owners have even reported honey badgers jumping through windows to get away. This behavior does not go away, and you will spend your life being attacked by your honey badger. 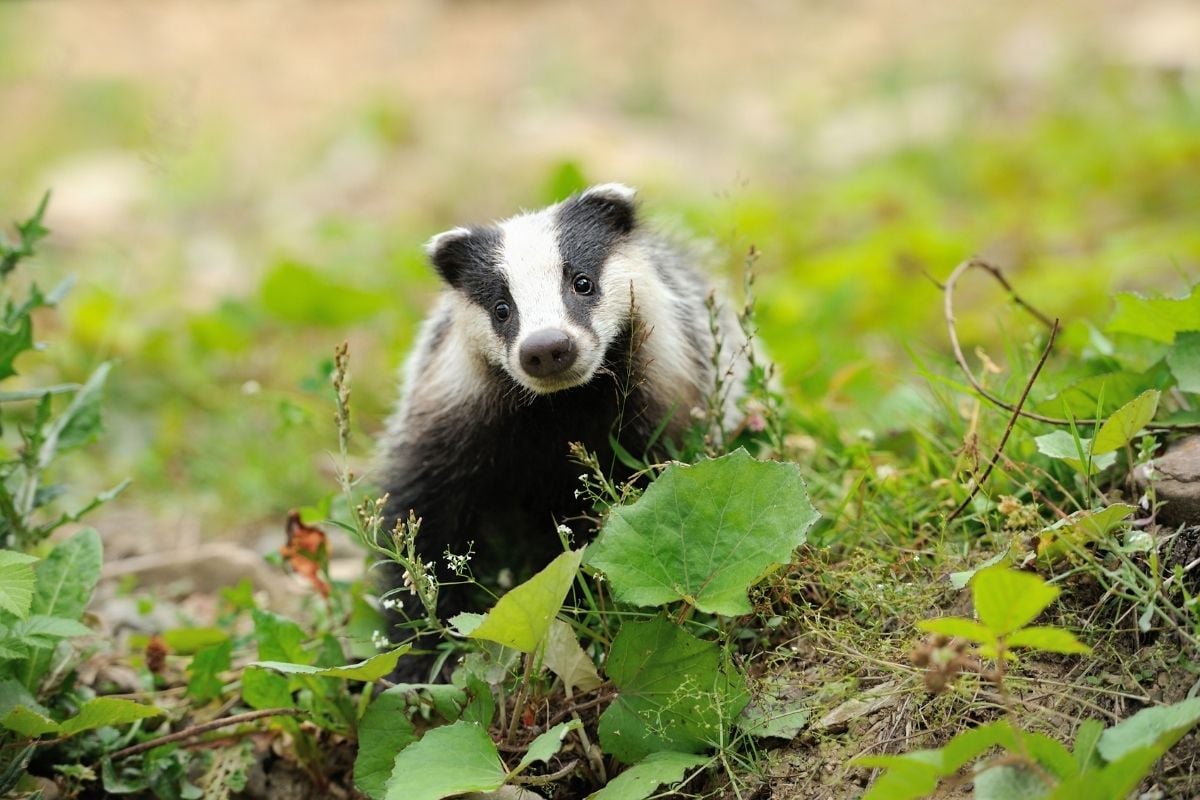 One is tempted to answer this question by referring to ursine lavatory facilities, but, short answer, yes, they are pretty dangerous. Everyone prefaces their remarks about honey badgers’ aggression by saying they only attack when they feel threatened. Unfortunately, as a solitary nocturnal animals, almost any time they spend with humans reads like a threat to them.

Honey badgers have been known to attack humans, horses, dogs, snakes, lions, and hyenas. They hold their own as well.   Honey badgers are well known for their strength and ferocity.

They will attack almost anyone or anything if they have no clear escape route, sometimes even driving lions and hyenas away. As a general rule, bees cannot sting them, porcupine quills don’t pierce them, and animal bites don’t break the skin. In other words, the honey badger’s skin is quite thick and tough, holding off arrow strikes and blows from a machete.

Witnesses say its attack is tremendously vicious.   If large grassland herbivores like horses, cattle, or Cape buffalo step on their burrows, the relatively small honey badges will surge out to the attack. Like its equally charming cousin, the wolverine, honey badgers will eat pretty much anything they can kill, and they can kill a lot.

They have been known, for example, to take on large animals more than ten times their size.  They are also, like humans, persistent hunters who will follow their prey until it finally dies. It eats the entire prey skin, hair, feathers, and bones.

Among the groups honey badgers threaten are domestic chickens. When near poultry farms, honey badges can become persistent poultry predators. Because they are strong and determined, they are tough to drive away, being known to rip planks off henhouse walls and roofs or dig under their cement foundations.

Like foxes and other henhouse predators, excess or frenzied killing is not unusual once the badger gets inside. Because of their overall toughness and viciousness, once a honey badger is in the habit of attacking your poultry, it’s time to consider getting out of the poultry business. Early in this century in Basra, there were stories of man-eating badgers allegedly released by the British to prey on the locals.

The British military vehemently denied the charges but warned that the honey badgers would be dangerous if provoked.   In yet another aspect of their charm, honey badges have been reported digging up human bodies in India. In Kenya, they are a significant rabies reservoir of rabies – yet another way in which they are dangerous. 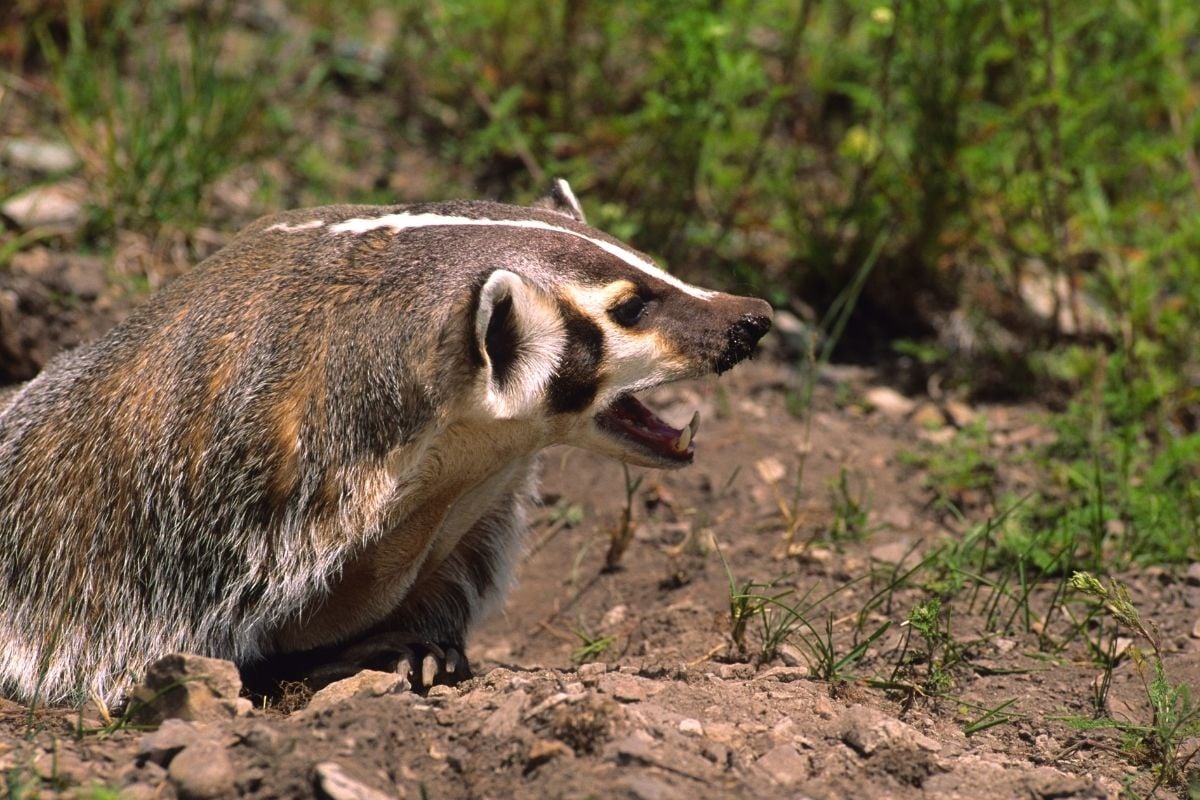 Virtually everything you read about a honey badger begins with the statement that they are fearless. It’s ferociously defensive and highly aggressive.  Even the Guinness Book of World Records calls the honey badger the world’s most fearless animal.

A video of a pair of honey badgers essentially fighting off a group of young lions, who appear as much startled as defeated. Still, the fact remains, two honey badgers were fighting what appeared to be six or eight lions – and the badgers walked away.  Bear in mind, that a large honey badger weighs about 30 pounds and stands 12 inches tall at the shoulder.

On the other hand, their claws are nearly two inches long, and their teeth and bite strength will get them inside a tortoiseshell. They are one of the few non-primates to be seen using tools.  In captivity, they will even team up to unlock gates and will use rocks, garden tools, mud, and anything else at hand to get out of their enclosures.

In the end, it’s pretty clear that honey badgers are pretty dangerous. If they chase down lions, hyenas, scorpions, and hordes of angry bees, you aren’t going to be much of a challenge.  Better to leave these grumpy, solitary fighters in their desert grassland isolation.