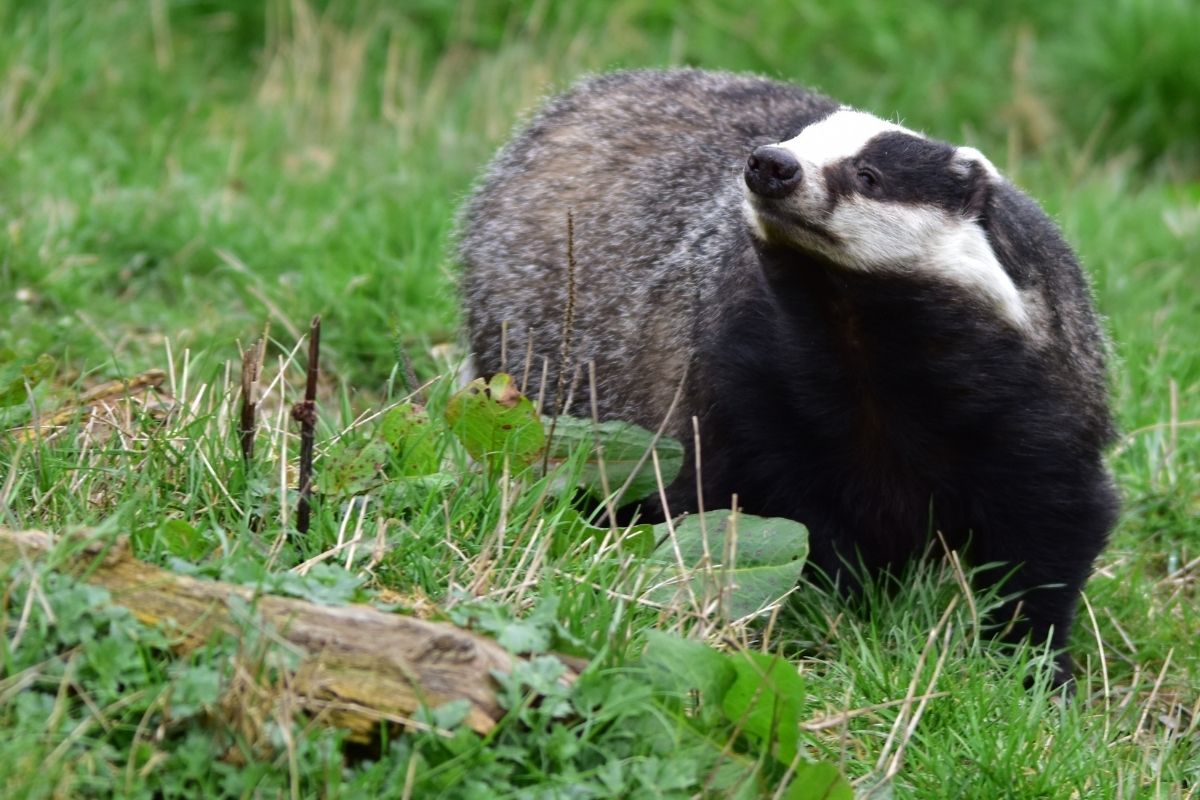 If you answered honey, you would not be completely wrong. Honey badgers (Mellivora Capensis) are fierce omnivores with an adaptable diet that includes honey, honey bee larvae, roots, berries and fruit, insects, small mammals, and even amphibians and birds. Honey badgers are fascinating, rough-and-tumble creatures and undoubtedly worth knowing more about.

For parents, this mammal is a treasure trove for school projects. 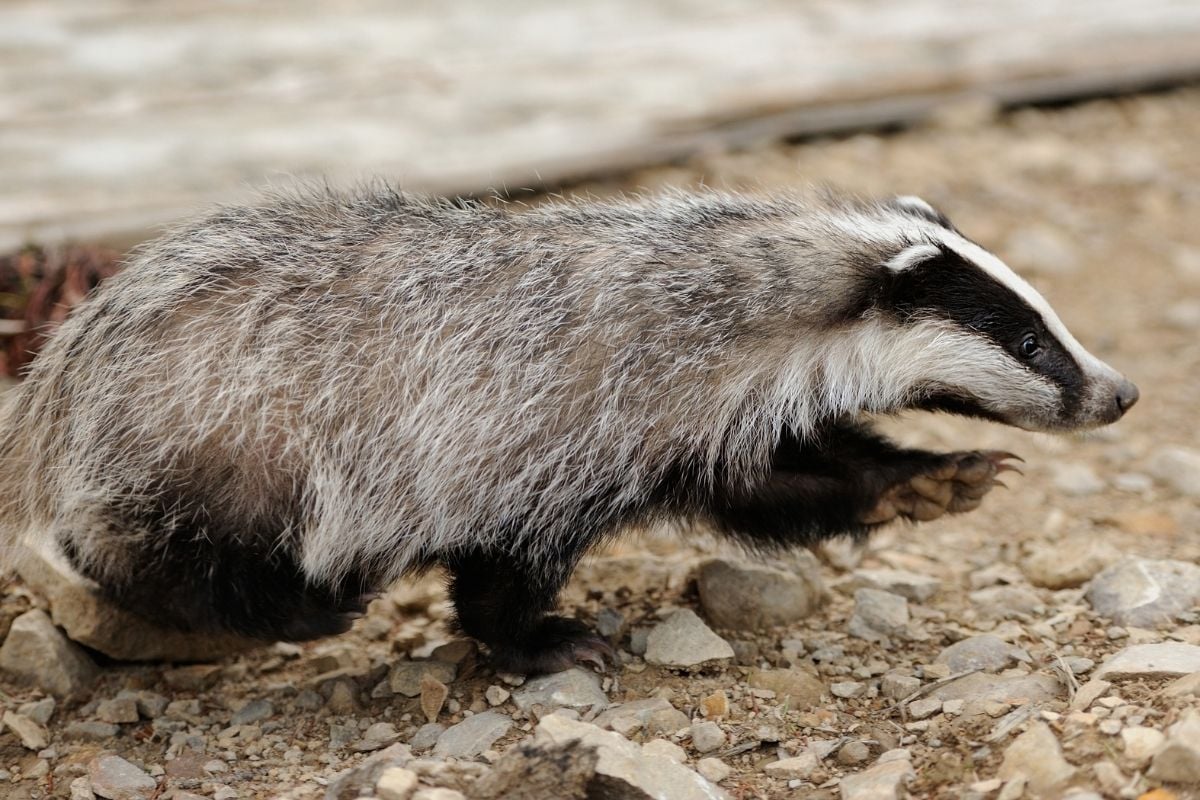 Unsurprisingly, honey badgers belong to the same family of mammals as otters, weasels, other badgers, and wolverines. The genus of the honey badger is Mellivora, a subcategory of the mammalian family Mustelidae, of the Carnivora order. Honey badgers are also known by the name Ratel.

Honey badgers are medium-sized, with an average shoulder height of approximately 11 inches, and they weigh around 30 pounds at maturity. They are distinguishable by their thick black fur and a broad silver-white stripe from their head to their tail. Their muscular neck has a thick layer of skin that helps them wriggle around and escape opponents’ jaws. 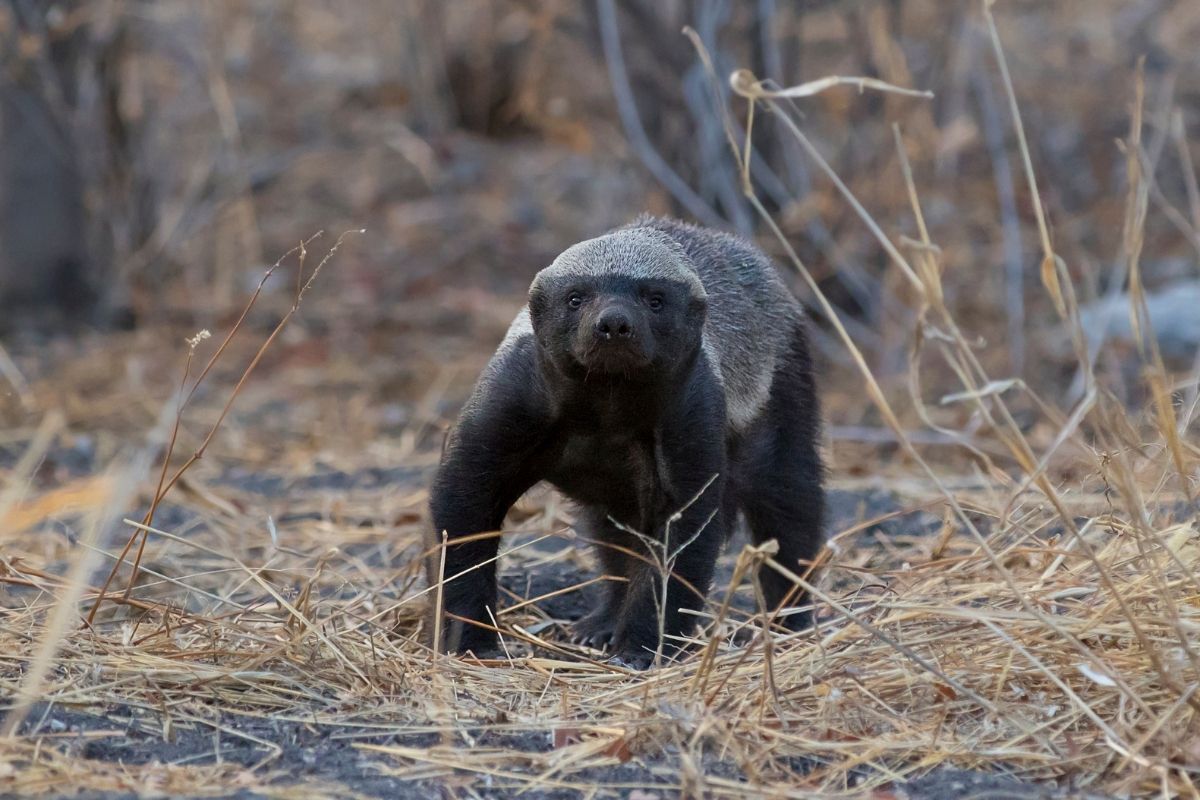 Honey badgers are found predominantly in sub-Saharan Africa, parts of western Asia, and in Iraq, Iran, and Saudi Arabia. They prefer a dryer habitat but can adapt to forest and grassland biomes. They use their long claws to dig burrows for homes, or if they feel lazy and it is convenient, they are not above stealing other animals’ burrows.

If neither of these is an option, then honey badgers will make do with what they have, including using termite founds and exposed tree roots. Honey badgers are intelligent and are one of the species in the animal kingdom that uses tools to make their lives easier.

Eating Habits of the Honey Badger 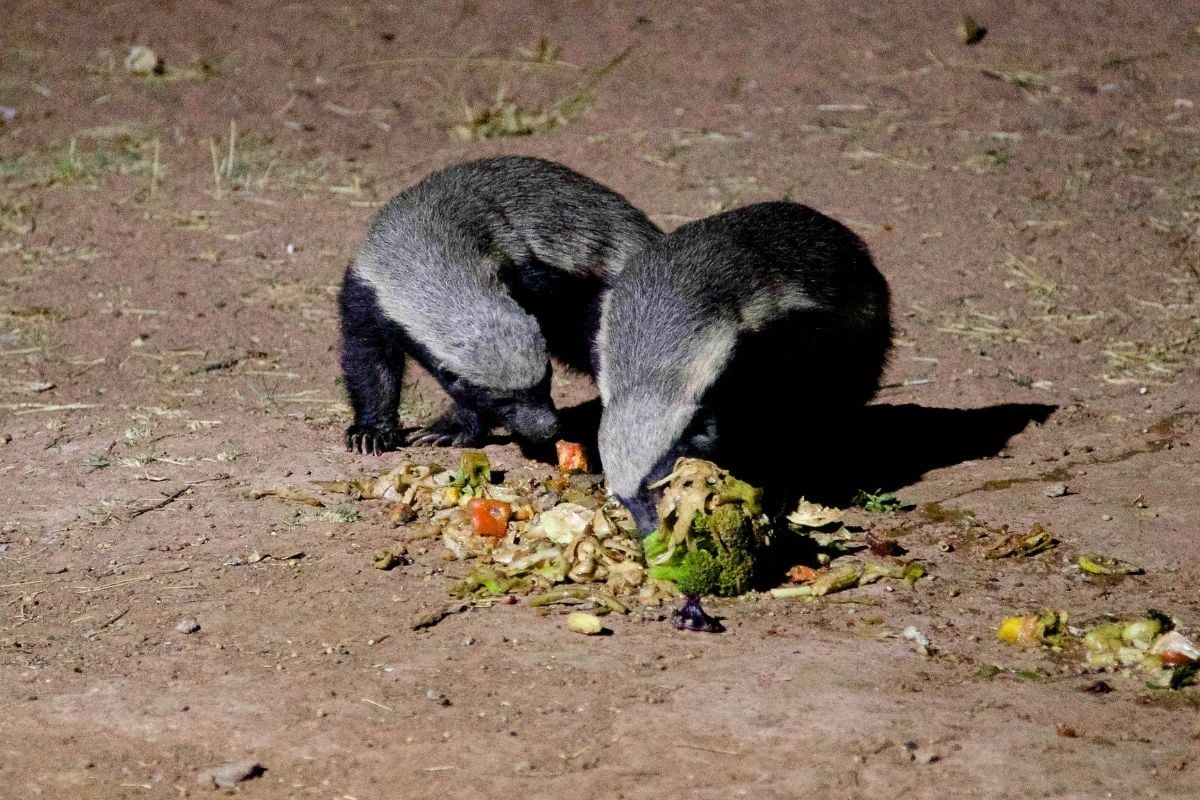 We already know that the honey badger is an omnivore, but they have strong carnivorous tendencies. They forage daily even if they are not hungry, which occasionally makes them wasteful. They are also somewhat opportunistic and will make off with another predator’s meal if they can get away with it, making them scavengers too.

The base of a honey badger’s diet is mainly small mammals, but they will adapt depending on what is available. If small mammals are scarce, they will eat insects and reptiles, including small crocodiles. Honey badgers have also been known to hunt and catch larger mammals like antelope, wild cats, foxes, and spring hares.

They eat fruit like the Tsamma melon for moisture in desert environments like the Kalahari instead of drinking water or as an alternative when water is scarce.

Honey badgers will eat the honey they are named for, but their primary motivation is to get to the protein-rich bee larvae when they raid beehives. Bee larvae seem to be their guilty pleasure, and they will take on a swarm of bees to get to what they consider a delicious delicacy. Since they have a strong resistance to venom and their skin is thick, they can take quite a number of bee stings, but if there are enough bees, they can deter or defeat the honey badger.

Your takeaways should be that a honey badger is not a picky eater, and in the animal kingdom, the strong and the adaptable survive and thrive.

In South Africa, where honey badgers are common, they are often a problem for commercial beekeepers and honey producers. Consequently, this has resulted in the poisoning, trapping, and shooting of honey badgers, which are considered a protected species in South Africa and other African countries. As an alternative, an initiative was launched to produce and sell “badger-friendly honey“.

Beekeepers utilize cost-effective methods such as moving their beehives higher up and utilizing traditional methods like using ash around the base of the hive and visual and tactile deterrents like strong lights at night and barbed wire or metal straps around the hive. Unfortunately, barbed wire is not that friendly, but it is still better than trapping. 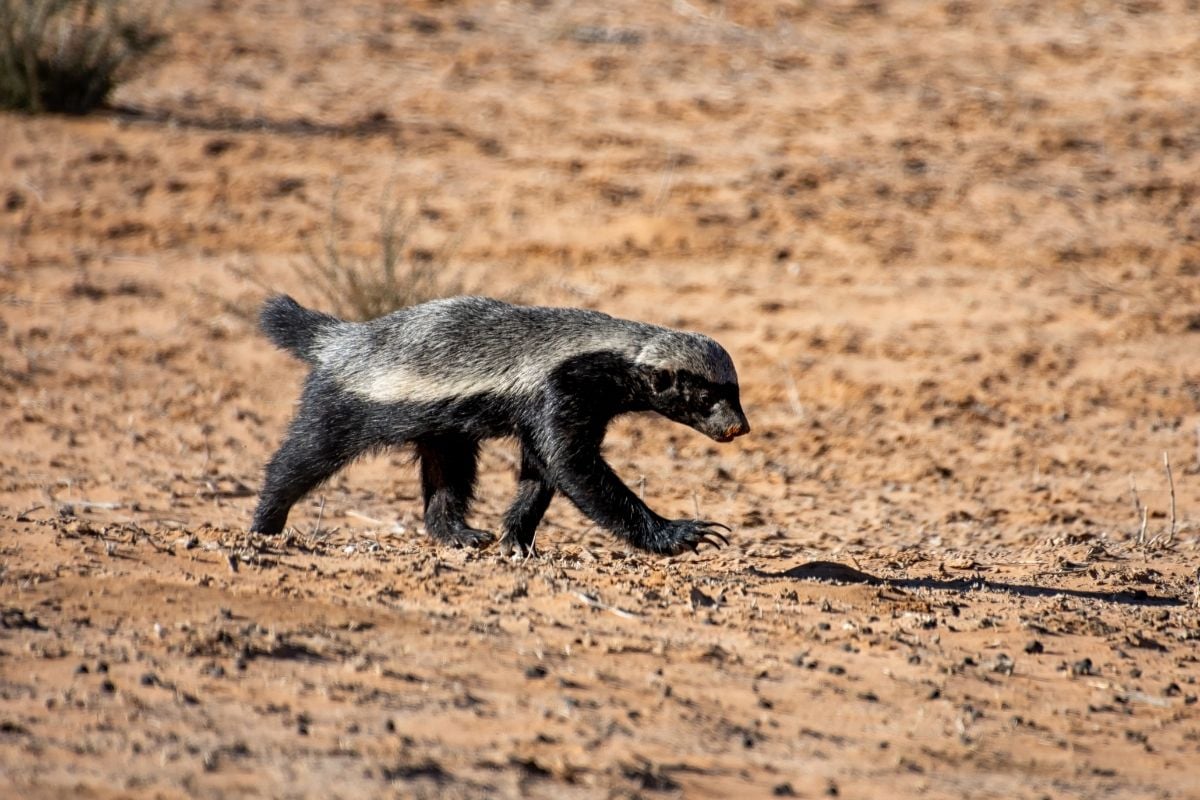 Or whether the Greater honeyguide bird has learned that there is the possibility of honey where there are honey badgers.

How Do Honey Badgers Hunt? 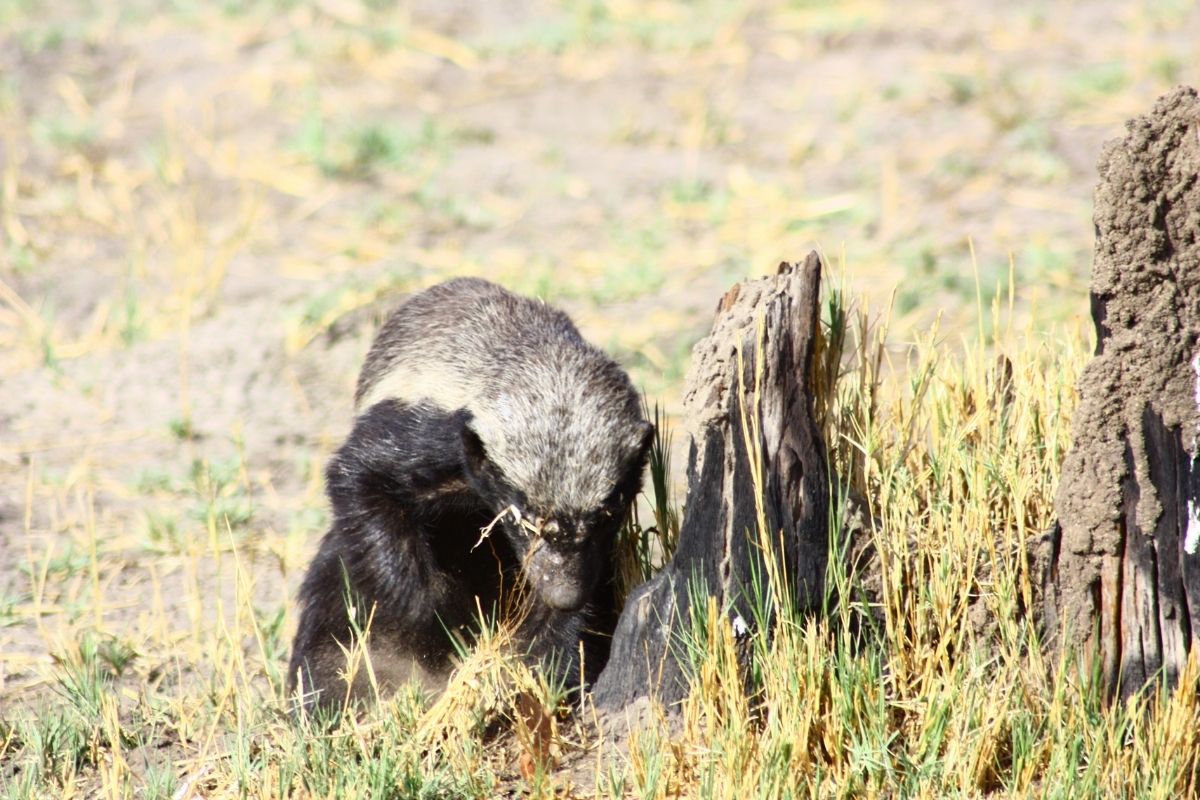 Hunting honey badgers use their strong sense of smell to find their prey and use their long claws to dig holes, hunt for prey, and subdue or trap prey, waiting them out. Honey badgers are a triple threat and are excellent climbers when present with a rough surface to climb, meaning they can get to bird nests. They are predominantly nocturnal, solitary hunters – this means they hunt alone and at night.

In desert areas, they may switch their hunting habits to diurnal in winter, which means they are active during the day. Honey badgers will travel to forage, and males, in particular, will range far and wide up to 20km (12 miles) to find their next meal. Their home range is big, up to approximately 193 square miles.

Female honey badgers tend to stick within 10km (6 miles) of their nests.

Yes, honey badgers eat snakes. They eat snakes such as pythons, mambas, and cape cobras. They are not wholly immune but resistant to venom, so hunting, killing, and eating snakes is perfectly acceptable.

What do Honey Badger Cubs Eat?

There is not much difference between an adult and a juvenile honey badger’s (or cub) diet. They eat what their mother gives them until they can hunt and forage independently, but they tend to focus on smaller prey when they are still growing. 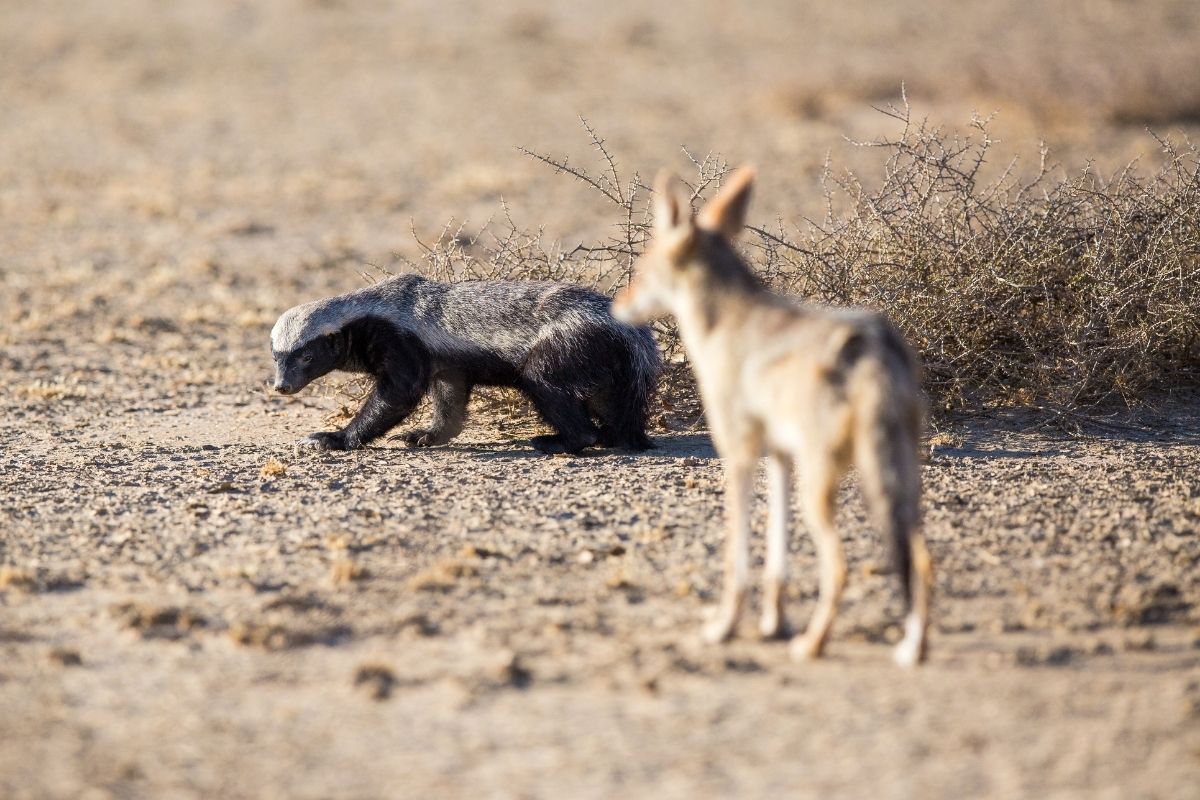 Honey badgers are generally quite fearless, but they will go out of their way to avoid humans. If they live near human habitats, they will remain nocturnal even in winter to avoid humans. If you or another predator should startle a honey badger, which often happens when they are digging their holes while hunting, their instinct is to attack.

Storytellers in honey badger regions suggest that the honey badger’s preferred method of attack is to emasculate their opponent using their razor-sharp claws. Still, there is no concrete evidence for this other than the anecdotal.

Before your eyes begin to glaze over, let’s round up the honey badger. They are fearless omnivores but may also be referred to as generalist carnivores in some literature. They are adaptable and eat almost anything they can get their hands or claws on.

A honey badger’s preferred diet is small and large mammals, including antelope. Still, if necessary, they will eat reptiles, including snakes and lizards, the occasional small crocodile, and some fruit for moisture. They hunt their prey by keeping their nose to the ground and digging holes to find and trap their preferred prey.

They will also scavenge and steal from other predators. Their guilty food pleasure is honey bee larvae, and consequently, some honey is also included in their diet. Honey badgers are fierce predators and will attack if they feel threatened.

If you encounter one, remain calm, do not startle them, and run and hide as soon as possible. They are found mainly in desert biomes in sub-Saharan Africa, parts of Western Asia, and Arabia.