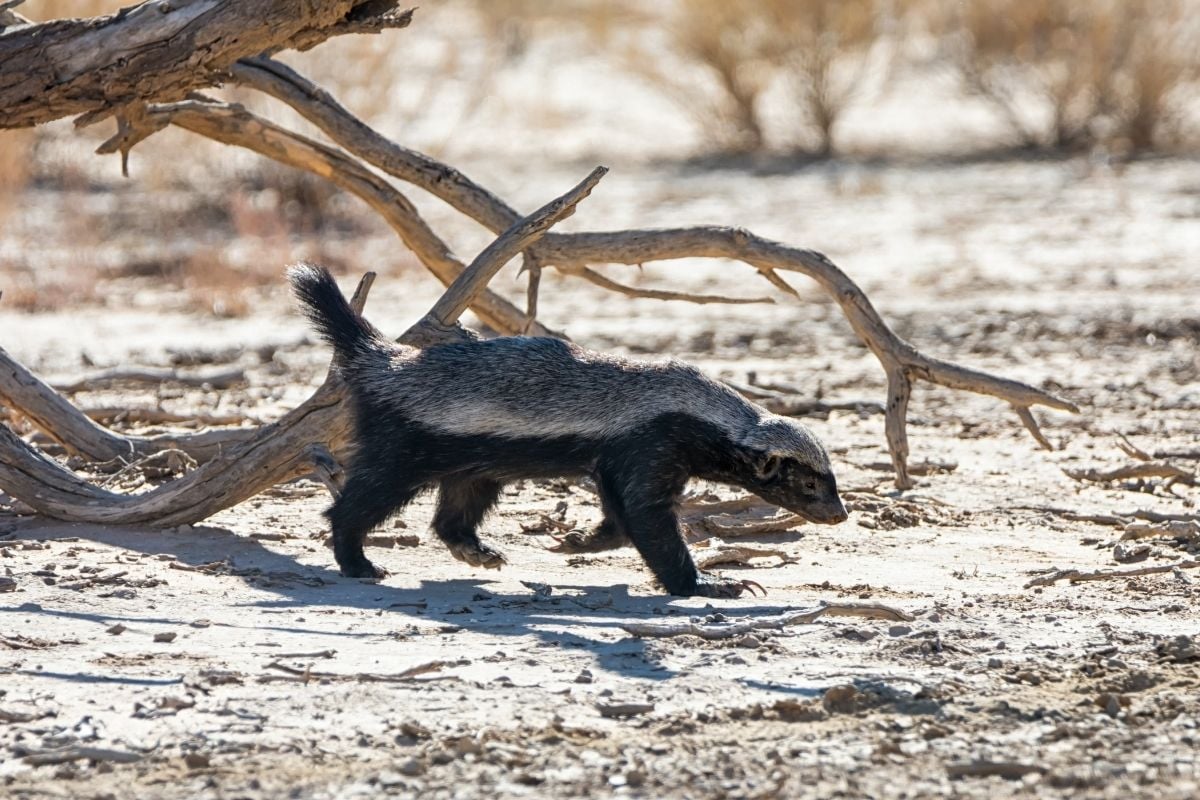 The University of Michigan’s Animal Diversity Web, states that we can discover badgers in the western states of the US, Canadian provinces in the central-western region, and the hilly regions of Mexico. Their thicker skin also allows them to go fairly unbothered in the wild, as we will see as we continue reading.

Where do Honey Badgers Live?

Honey badgers are incredibly adaptable mammals that are native to Africa, the Middle East, and Western Asia. They tend to have a very wide living area ranging up to 193 square miles.  While this seems like a vast area to cover, honey badgers are up to the task.

Similar to domestic cats, they use their scent glands to mark their territory. Male and female honey badgers tend to occupy different territories, with males generally having more. Typically, honey badgers live a more nomadic lifestyle.

They do tend to stay in a general area. However, they do not sleep in the same spot every night.  They can build burrows or simply occupy the homes of their distant relatives.

The goal is to be well protected against predators since they usually sleep throughout the day. Before we delve further into where badgers live, let’s find out more about what they are.

What are Honey Badgers? 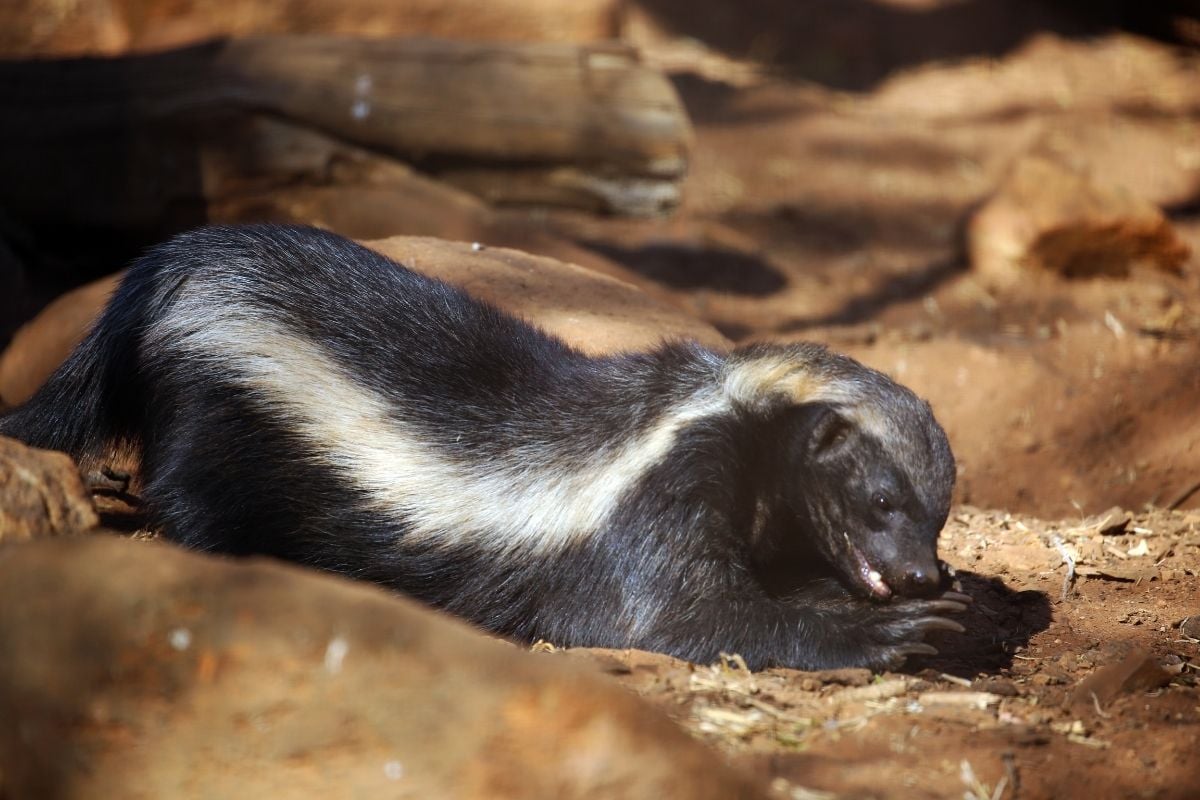 Honey badgers have a reputation for being one of the most fearless animals to ever live, but there is so much more to them.  Honey badgers are small-sized animals, usually weighing between 13 and 30 pounds. They are members of the weasel family with very thick skin that helps protect them from predators during fights.

Honey badgers got their name because they love to feed on honey and even honeybee larvae. If you take a glance at a honey badger, you might mistake it for a skunk. Similar to a skunk, honey badgers can release a horrid smell when threatened and mark their territory.

They have a long body with long claws and sharp teeth that make them a fearsome attacker. 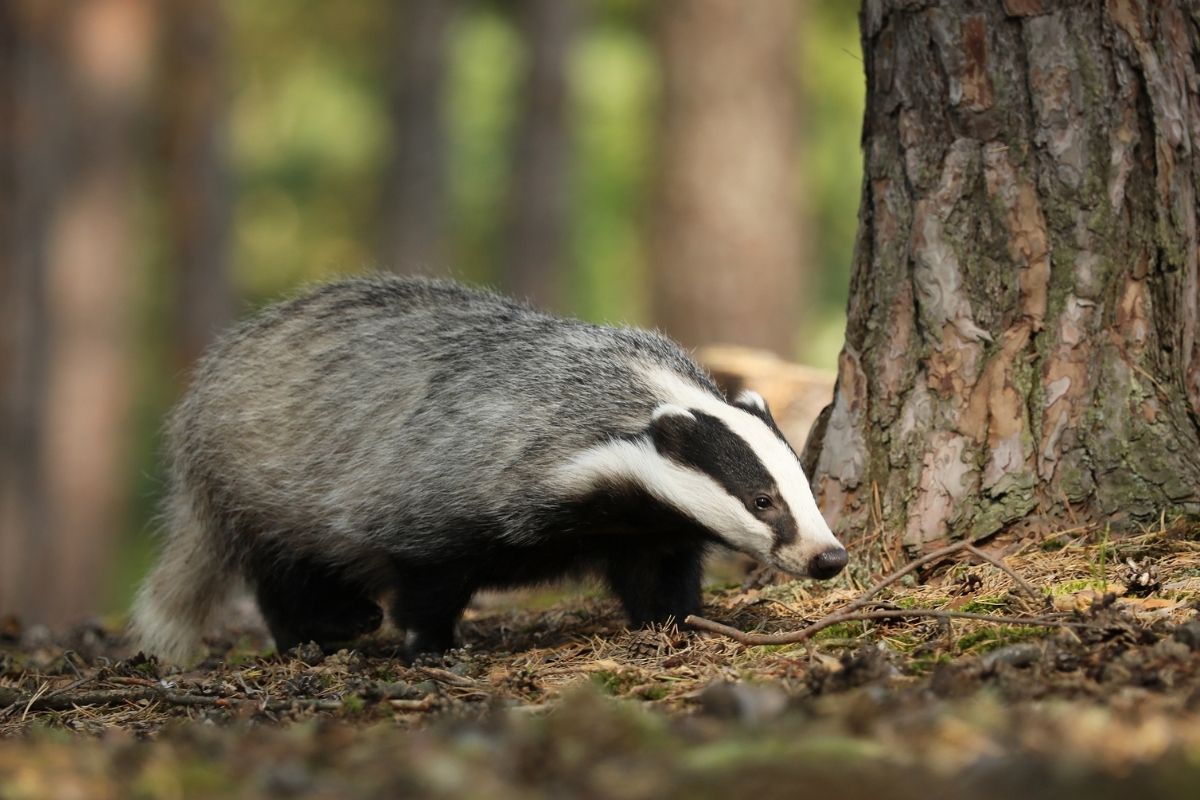 Badgers can adjust to a variety of settings, but they prefer grassy, open, and dry areas. In addition, some inhabit moorland, sea cliffs, hedgerows, quarries, and forests. The Great Plains of America is where American badgers are most commonly found.

Hog badgers are mostly found in Southeast Asia, India, and Sumatra, while honey badgers are primarily found in southern Africa. The Asian badger can be found from Russia to China and Eastern Europe, depending on where you look.  It’s estimated that ADW estimates that the European or Eurasian badger lives anywhere between Spain and Ireland to eastern Russia, China, and Japan.

See also  Can Porcupines Float in Water? How?

The United Kingdom is also home to huge populations of badgers. They’ve started “culling” the population so that tuberculin can’t get transferred to the cattle from the badgers.

Due to their habit of sleeping during the day and being most active at night, badgers are classified as nocturnal. Foraging and burrowing are made easier for badgers by their powerful limbs and sharp claws. They live in tunnels and caves they’ve dug, and their bedding is made of grass and leaves.

A badger’s sett is their home. The Somerset Wildlife Trust notes that badgers are clean creatures. Therefore, setts have a distinct chamber dedicated to the bathroom.

A clan or create is a group of badgers that live together as a family. It is common for a clan to share territory and settlements.  Setts can be hundreds of years old and have been utilized by generations of badgers.

The Somerset Wildlife Trust states that a single sett can be anywhere between 22 and 109 yards in length.

What do Honey Badgers Eat? 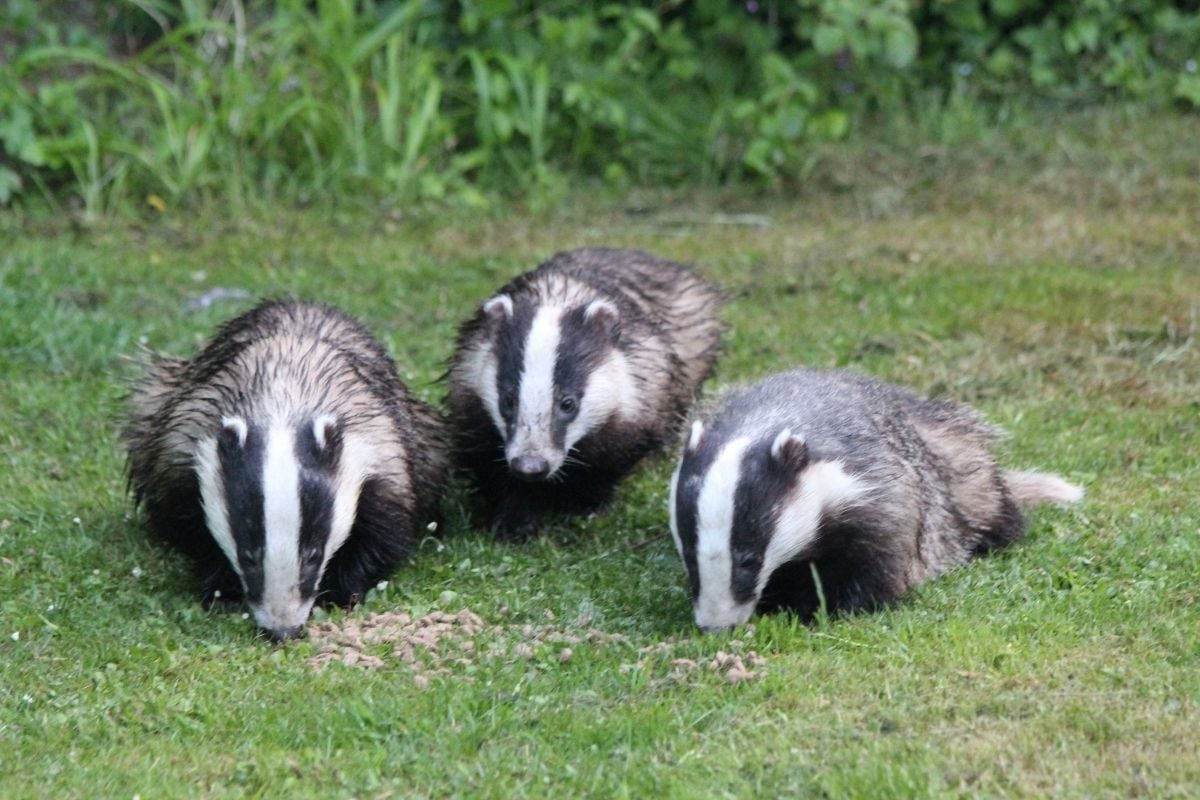 Despite their size, honey badgers are known as some of the most ferocious hunters, even taking on animals much larger than them. They are omnivores, which means their diet consists mostly of meat. They can eat anything from berries and fruit to reptiles, mammals, and even birds.

They are known to also travel very far in the hopes of finding prey, and when they do it doesn’t usually end well for the prey. While they do love meat, there is one thing they love even more; honeybee larvae.  They are more than willing to endure hundreds of bees attacking them to get to it.

As tough as they are, this isn’t always a successful endeavor.  Some honey badgers have been found dead in large beehives due to continuous bee stings.  Opportunist might be a word that also best suits them.

They tend to feast on their kill, but they will at times scavenge the leftovers of other animals or even chase animals away from their kills. They can also use their long and sharp claws to dig for food underground using their strong senses.

Honey badgers are some of the toughest animals in the wild, but that doesn’t mean they don’t have any predators. While badgers don’t have many natural predators in nature, they have been known to get hunted.

They don’t have much in the area of defense against these animals, since they are much larger and possess strong bites.  Perhaps the biggest threat to the honey badger is humans. Since they love honey larvae so much, beekeepers usually kill them to protect their bees.

Farmers also tend to kill them when they come in contact with their crops or livestock. While not very common, they are sometimes hunted as bushmeat.

Honey badgers reproduce all year, with the female giving birth to a single cub seven to ten weeks after mating. Honeybadger cubs, often known as kits, are born blind, hairless, and with pink skin.  The cub’s gray skin, fur, and distinctive wide white stripe down its back take roughly a month to mature.

The cubs’ eyes take around two months to open. Cubs attain adult size at about 6 months old but will remain with their mother for up to two years. During this time, the cub learns to dig, hunt, and climb trees, all of which are necessary abilities before venturing out on their own.

Honey badgers can live up to 26 years in captivity and up to seven years in the wild. They are most commonly found in the wild.

Honey badgers are threatened in some areas of their range, owing to human encroachment, which lowers their food supply. People that grow bees for honey do not like the honey badger because of its sweet tooth.  To protect their beehives, some beekeepers kill any honey badgers they come across.

Honey badgers can’t jump.  Many beekeepers have discovered that just raising the beehives a few feet off the ground deters honey badgers from trying to access them. That trick helps with keeping the bees and honey safe.

Many African beekeepers are now producing “badger-friendly honey”—it’s a win-win situation for everyone.

Are Honey Badgers Dangerous To Humans?

Yes, honey badgers can pose a real threat to humans. If you do encounter a honey badger, it is recommended that you keep your distance, try your best not to panic, and whatever you do, do not provoke it.  This means throwing items at it or trying to get too close.

Honey badgers cannot be kept as pets. As cute as they might appear, they are wild animals and cannot be domesticated.  They are very aggressive and could harm you, and your other pets or damage your property.

Furthermore, it is illegal in most countries to keep them as pets, because of the reasons previously listed.