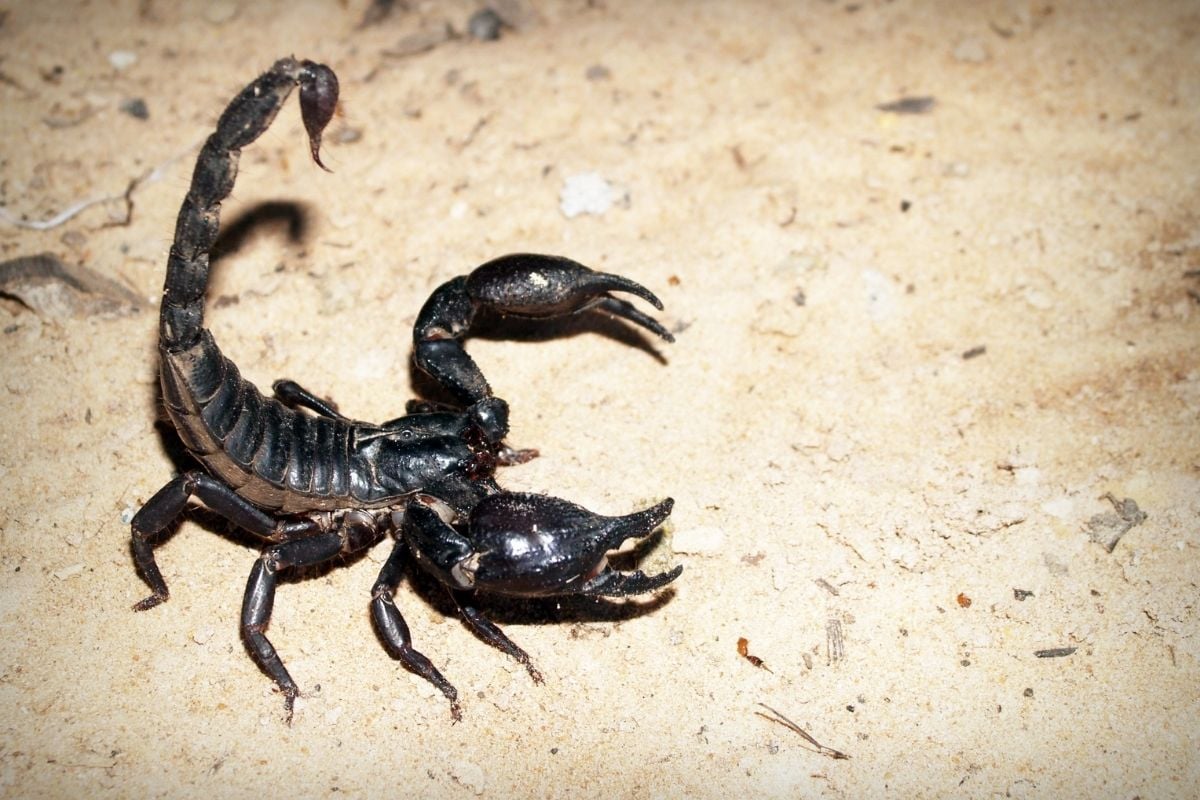 Scorpions have a somewhat evil reputation as small but vicious creatures. If you’ve ever seen one from up close, you’ll understand why. Not only do scorpions look creepy and scary, but some of them are also venomous!

They fall into the Arachnida class and are related to spiders, ticks, and mites and can be found in many different areas all over the world. Most commonly, they are found in deserts, forests, and even places like the Himalayas. Let’s learn more about these fascinating Arachnids and how they continue to exist despite being killed on sight by humans.

As if being one of the creepiest creatures on earth isn’t enough, there are also many different kinds of scorpions. Some of them are highly venomous and can cause real problems, while others aren’t a threat to anyone but their prey. 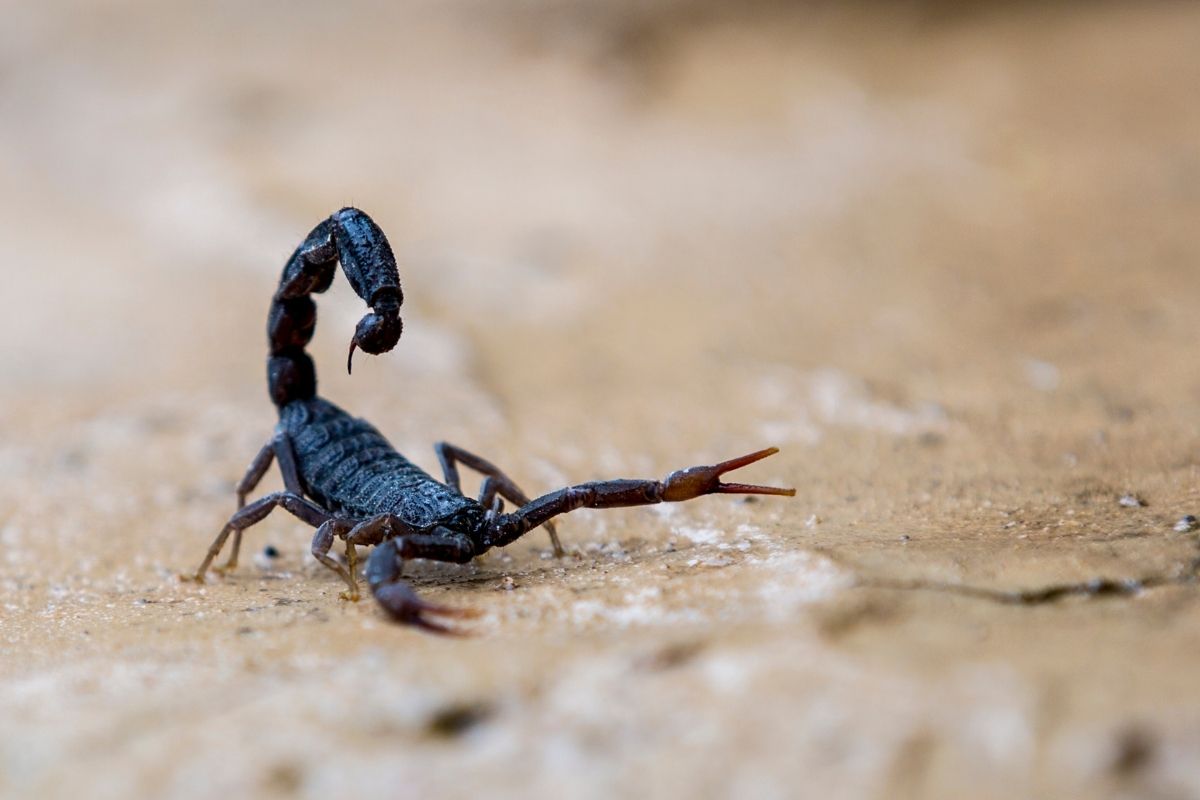 If you ever encounter any of the scorpions on this list, be careful! You can get hurt and even die if you mess with them. If the scorpion made its way into your home and you need to get rid of it, suck it up with a vacuum or use a broom and dustpan and take it outside.

See also  When Do Gophers Come Out of Their Holes?

The Spitting Thick Tail Black Scorpion is a native of South Africa and one of the most venomous types you’ll find. It can grow up to six inches tall and is typically found in desert areas and scrubland. As their name suggests, these scorpions have thick and powerful tails, two tiny pinchers, and a very potent sting.

This scorpion has two kinds of venom. The first venom is used to immobilize smaller prey, while the second one – which is more toxic – is used for bigger creatures like humans. What’s even scarier, this scorpion can spit venom which can go as far as three feet.

The venom can lead to temporary blindness and it is as potent as cyanide.

This is yet another scorpion that can be found in Africa and is considered quite hardy. You’ll also find the Yellow Fat Tail Scorpion in the Middle East. Typically, this scorpion can grow to be three inches long.

It uses its large pinchers to hold its prey and then comes in to administer its sting. Their venom is deadly and many people have died after getting stung.

This United States native is very deadly and can be located in the Sonoran Desert. Like the Yellow Fat Tail Scorpion, it can grow up to three inches, but the female is normally a bit smaller. A sting from this scorpion can cause a burning sensation and numbness around the affected area. But that’s not all.

The venom is strong enough to kill humans.

The Shield-tailed Scorpion is quite big and can grow up to nine inches long and lives in the Arabian Peninsula. It is sandy-yellow in color and its tail curves over its back quite dramatically. The venom that this scorpion uses is very bad for humans, but they tend to avoid going near people.

Known for its sting and venom, this Middle Eastern and North African-based scorpion is actually a cousin of the Yellow Fat Tail Scorpion. The venom of this scorpion is lethal and the scorpion itself is quite aggressive, making it a threat to humans. The venom is super scary as it attacks the victim’s central nervous system.

This leads to paralysis and respiratory collapse.

The Brazilian Yellow Scorpion is one of South America’s deadliest scorpion species with venom that is very toxic. Thousands of people have died because of this scorpion’s sting. A fun fact about this scorpion is that the female reproduces without any help from the male.

They can spawn up to 30 baby scorpions twice a year.

Also known as the Hissing Scorpion or Shiny Burrow Scorpion, this species of scorpion is mostly found in areas throughout Southern Africa. When disturbed, they will make a hissing sound, hence the name. These scorpions are also known for the deep and spiraling burrows they make in sandy soil.

They can be bigger than most other scorpions and have bulky bodies and large pinchers.

Mostly found in moist forests like the African Rainforest, this scorpion is black and has pinchers with a red hue. They can grow about four to five inches in length and their sting serves as a very effective defensive weapon.

The Deathstalker Scorpion is one of the deadliest in the world and lives in the Middle East and Africa. It has a distinctive yellow color along its tail and legs with a darker body. Typically, these scorpions grow to about three inches long.

This scorpion’s sting is very painful and leads to increased blood pressure and heart rates. Victims can also suffer convulsions and even go into comas as a result.

The Indian Red Scorpion is highly lethal and can be found in India, Sri Lanka, Eastern Nepal, and Pakistan. It has an orange to red body and grows to be approximately three inches long. When stung by this scorpion, the victim will experience many symptoms such as nausea, pain, sweating, and heart problems.

Sometimes, the venom can even lead to the victim’s respiratory system collapsing and death.

Here are some of the largest scorpions in the world. They may not always be as dangerous as the most venomous scorpions, but they’ll definitely scare anyone who sets sight on them. 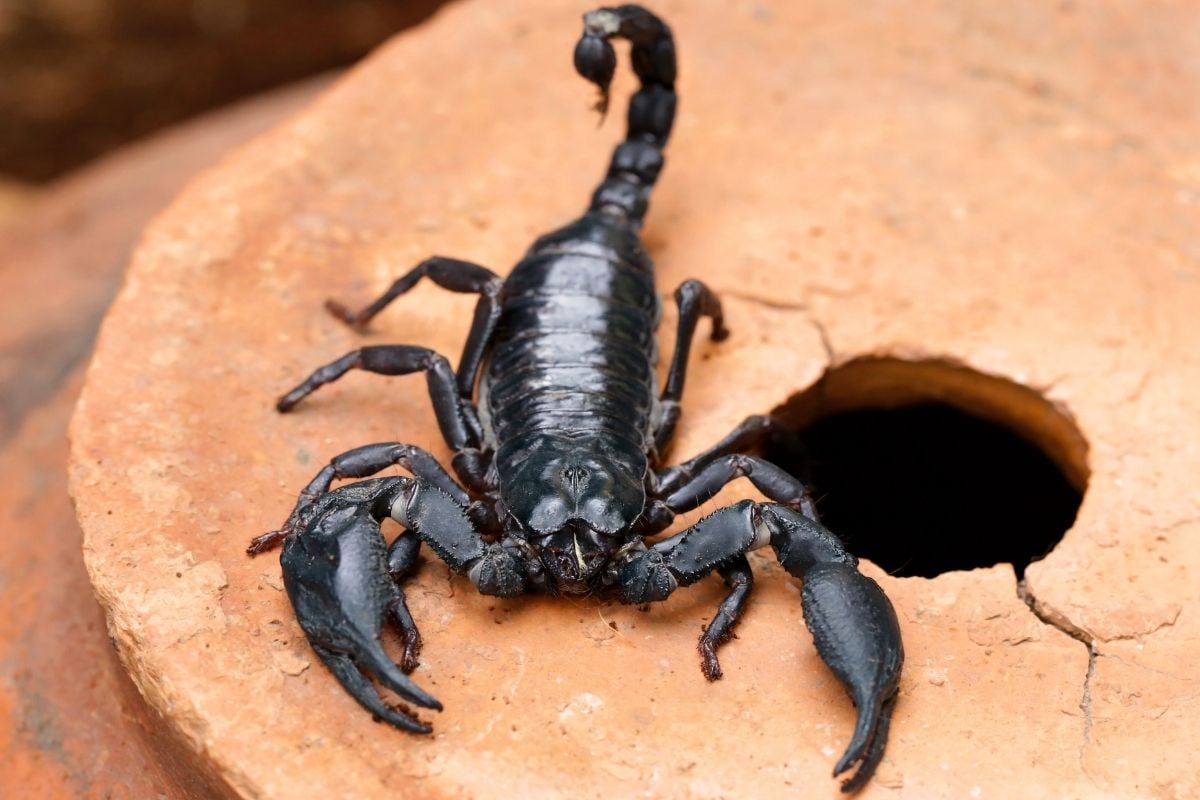 This scorpion is also known as the Slender Bark Scorpion and it’s bigger than the scary Deathstalker Scorpion. It grows to about 4.7 inches in length and can be found in Jamaica, the Canary Islands, Cameroon, and North and Central America. These scorpions get their name because they like to spend their days in the bark of trees and under rocks.

As a result, their main predator is the tarantula, which also likes to spend time in trees.

These scorpions are completely black and live in humid forests such as you’ll find in Vietnam and Laos. They hide under leaves and rocks and ambush their prey.  Vietnam Forest Scorpions are quite aggressive but are actually consumed by the indigenous people of Vietnam.

Their venom is also used to treat people who suffer from pneumonia.

This black scorpion can grow up to more than six inches in length and live in burrows in the ground and under logs. They are very hardy and can go for long times without eating and not starve.

The Giant Hairy Scorpion is one of the largest scorpions in North America and can grow up to 6.7 inches long. You’ll find them in Arizona, Utah, California, and Nevada. Identifying them isn’t difficult – they have green backs and yellow legs. Their name comes from the hair that grows on their tail and legs.

These scorpions are native to Indonesia and can be found in the country’s rainforests. They are black or dark brown with a bit of a green hue. Typically, they grow to be between four and seven inches long and are quite well-built.

With a robust pair of pinchers, this scorpion looks very intimidating. If you add to that the fact that it can grow up to eight inches long and has a black color, it’s no wonder people don’t want it anywhere near them. However, they’re quite timid and stay away from humans if they can.

Rock Scorpions can grow over eight inches long and are dark brown with lighter colored ridges along their backs. They have thin nails and a rather distinctive appearance. These scorpions are found in rocky areas in South Africa and are sometimes called the Flat Rock Scorpion.

It doesn’t have a strong sting – it’s only about as potent and painful as a bee’s sting.

The Giant Forest Scorpion takes the title of the biggest scorpion on Earth with a massive length of nine inches on average. These scorpions weigh about two ounces. They mainly live in the rainforest areas of India and Sri Lanka.

Because they’re so big, the Giant Forest Scorpions can feast on lizards, other scorpions, insects, and reptiles. However, despite their size, their stinger is relatively weak and is only used as a last resort. 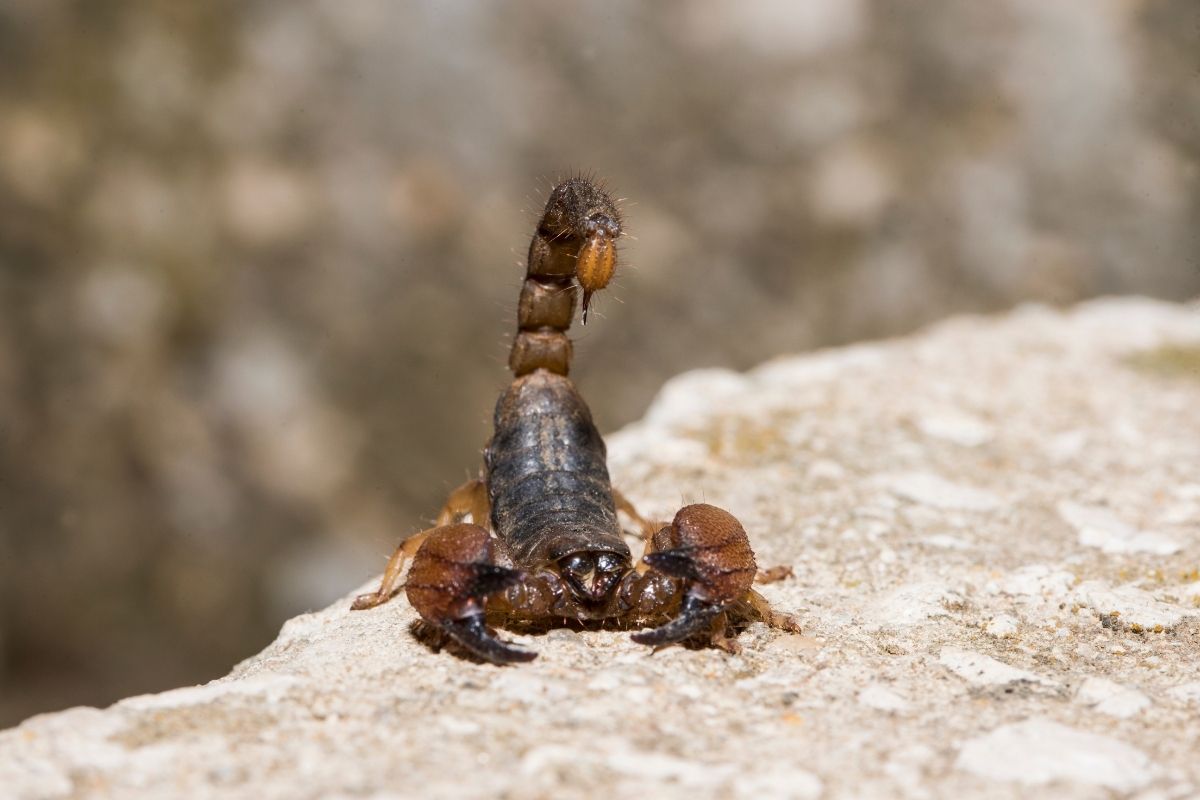 There are many different scorpions and almost 2 000 species, but only about 30 to 40 of them are actually a threat to humans. Scorpions prefer to stay away from people and will only enter homes when it has rained or there is a fire or similar situation in their habitat. Most scorpions eat insects, reptiles, lizards, and other scorpions.

However, if food is scarce, scorpions can slow down their metabolisms and survive longer than expected. Most scorpions are what can be called ‘sit-and-wait’ predators and are able to sit motionless until their prey is in their ‘ambush zone’. Scorpions are able to sense small vibrations in the ground and some of them are so good at detection that they can pick up the movements of flying insects.

Scorpions have amazing survival skills and are able to live in some of the toughest environments on the planet, like deserts. Research has shown that even after being frozen overnight, scorpions can be put in the sun the following day and just walk away. There is only one thing that scorpions absolutely need to survive: soil.

They burrow in the ground and require loose soil.

The reproduction cycle of scorpions is seasonal and breeding takes place during the warmer months of the year. Males will travel very far to find females to mate with. They track them down thanks to a pheromone that the females emit.

Mating is not a simple affair – there will be a complicated courtship that is initiated by the male who will grasp the female with his pincers. The pair will then proceed to move sideways and backward as if they are dancing. Breeding will then happen.

Sometimes, the females will eat the males once the breeding has been successful. Females will mate multiple times, but some species of scorpions can reproduce without any mating necessary. Mother scorpions dedicate a lot of time to their offspring, to which they give birth as live youngsters.

When born, scorpions are white and covered in a membrane. They free themselves and then crawl onto their mothers’ backs, where they will stay for anything from one to 50 days.  The young scorpions are defenseless during this period and depend on food reserves in their bodies to stay alive. They receive water from their mothers through a cuticle while staying close to them.

It’s essential for youngsters to stay close to their mothers at first so they can survive. After their first molt, though, they’ll leave and set out on their own. Scorpions will molt four to nine times before they are adults.

Scorpions can live anything between two and six years, and even longer. 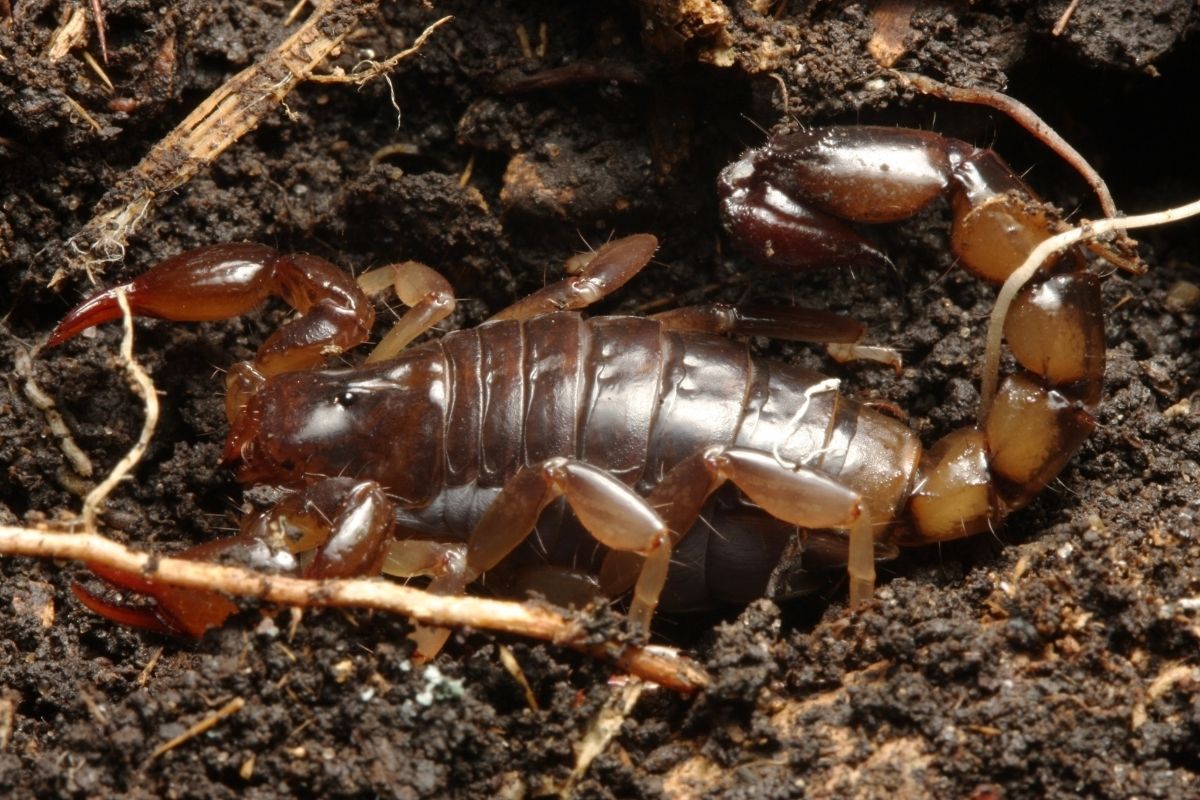 Scorpions are nocturnal and tend to hide away during the day and spend their time in their burrows or hiding under bark and rocks. Scorpions live in varying habitats, from snow-covered mountains to caves and deserts. They can survive in unfriendly environments and even thrive where you’d think they’d suffer or struggle to stay alive.

Because scorpions have a lot of freedom of movement – they use their legs to cling to surfaces and can climb at difficult angles and sometimes even upside down.