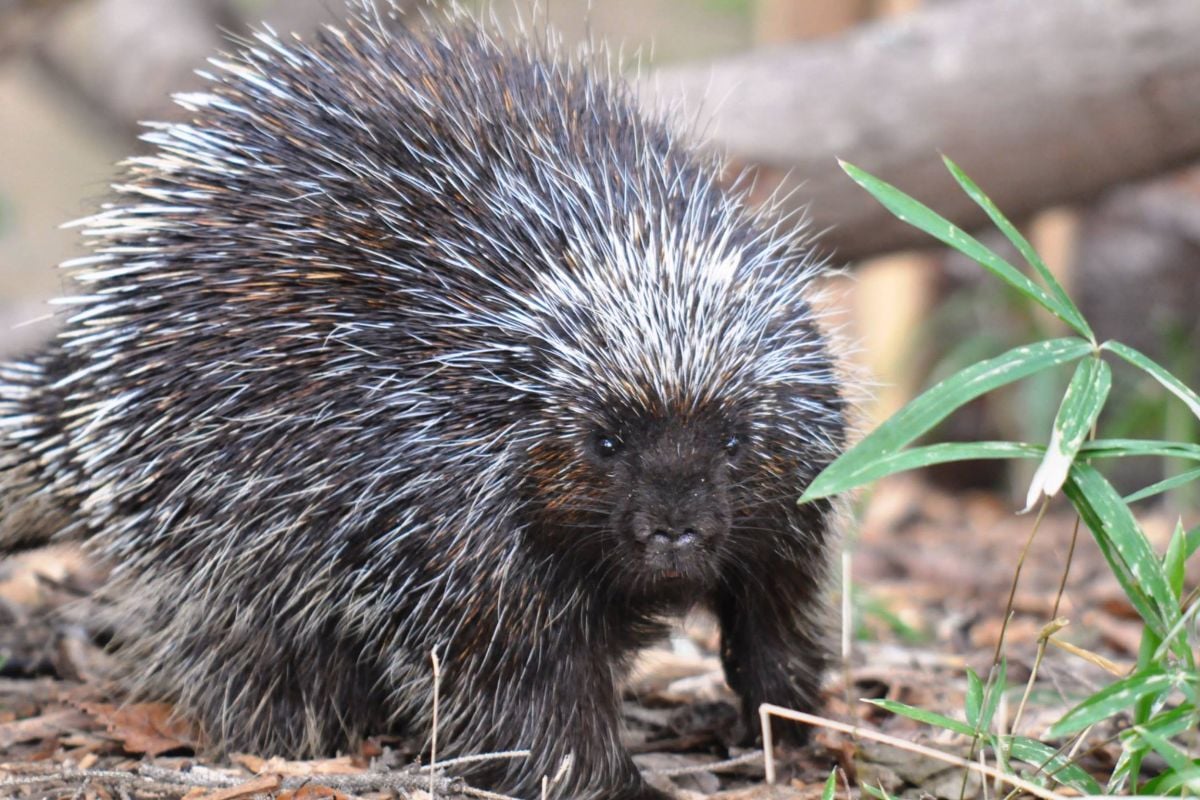 Porcupines are considered rodents. They have brown, yellow fur and stiff quills covering their bodies everywhere except their soft fur-covered stomachs. They are the second-largest rodent in North America, second to the American Beaver, which is almost double their weight.

The average American porcupine weighs only about 20 pounds, and their length is about twenty-five to thirty-six inches full-grown. A male porcupine is bigger than a female. They have a prehensile tail which is like a third arm and can wrap around a tree branch, allowing them to be stable climbers.

They tend to be nocturnal, but you can occasionally find them wandering around during the daytime or early evening. The porcupine’s feet have four toes on the front and five toes on the back. Each toe has large curved claws that help the porcupine climb trees and get the food they like to eat.

Porcupines are herbivores that love to eat leaves, twigs, bark, and green plants, and their claws help them do this. The pad of their foot is relatively soft and hairless. Another interesting characteristic of the porcupine is the ability of their feet to help them swim, and they are excellent swimmers.

Between the buoyancy of their quills and their feet doggy paddling, they glide through the water with ease. The porcupine’s eyesight is poor, but its keen hearing and an acute sense of smell help the porcupine overcome its sight.

The Mechanisms of Defense of a Porcupine 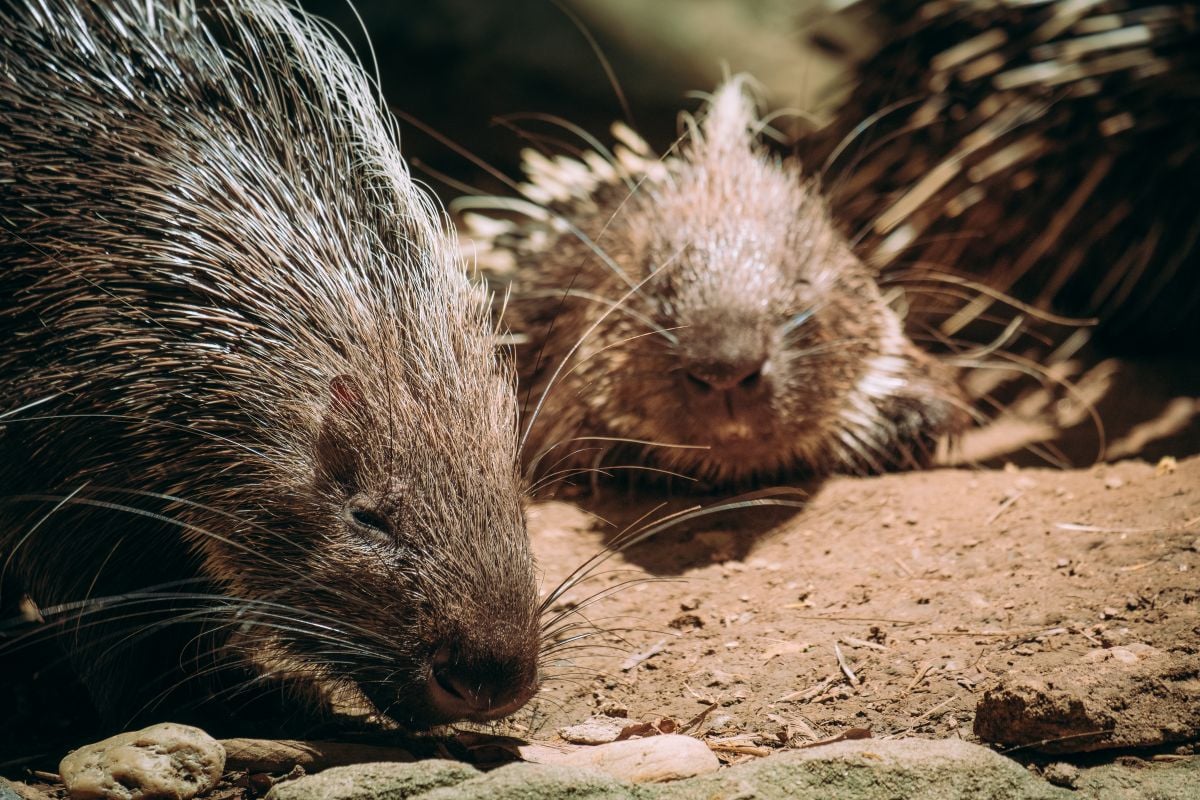 The porcupine has a lot of predators, which is pretty surprising since they have some rather unique mechanisms of defense. Some predators are cougars, coyotes, bobcats, foxes, lynxes, bears, wolves, and great horned howls. Scientists have found quills in all the animals as the porcupine attempts to protect itself from them.

The predator will attempt to attack the porcupine by biting at its unprotected face or biting at its belly side, which has no quills and is very soft. In addition to the porcupine’s soft body parts and poor eyesight, they are also slow-moving – they max out at about two miles per hour. They definitely need self-defense methods, and the porcupine has two very unique defense mechanisms.

The Porcupine is Stinky 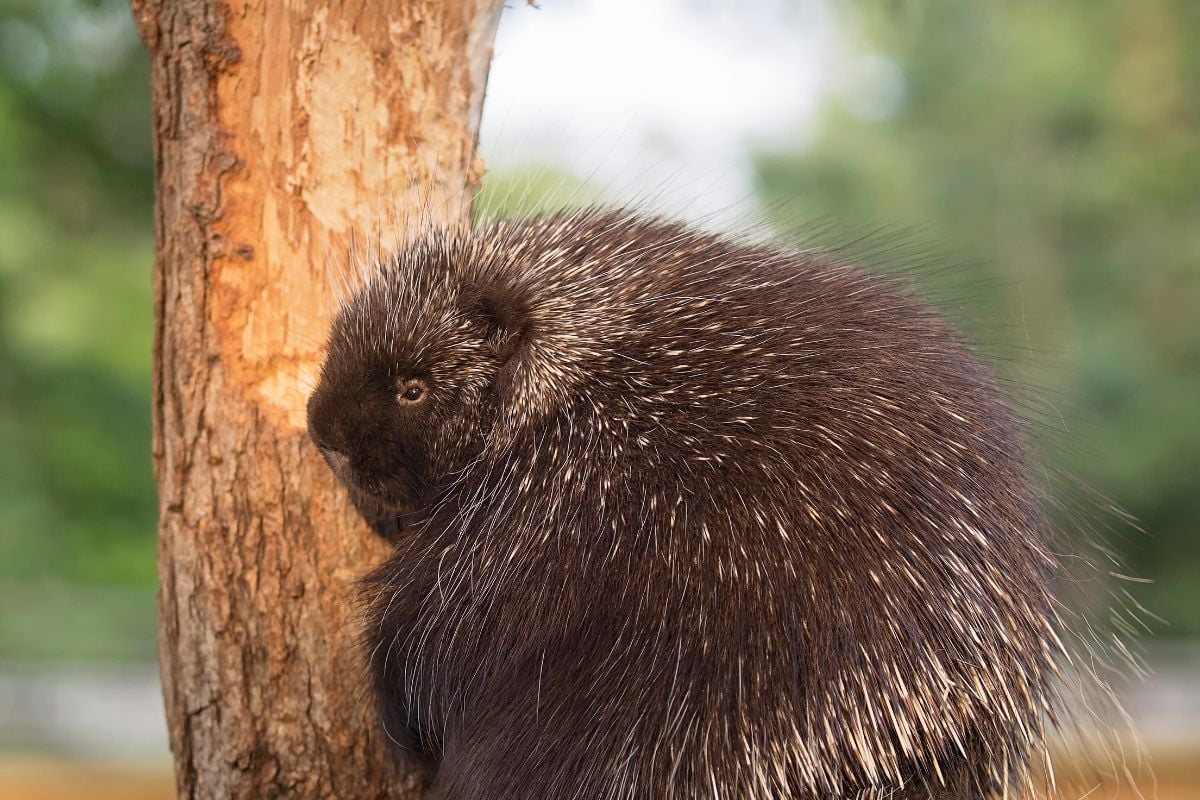 One of the porcupine’s self-defenses is their pungent smell. The smell is equivalent to a block of very stinky cheese. The porcupine can emit this odor to let predators know they are serious about defending themselves.

The porcupine will emit this stinky musk from a special gland just above its tail. The gland is called the rosette. Though it certainly does not smell like a rose.

The musk is moved up the porcupines’ backs by unique quills located just above the rosette gland. When a porcupine feels afraid or is being attacked, it will release the stinky musk and raise its quills, showing you that he is not afraid to use his second line of defense.

The Second Line of Defense: the Porcupines Quills 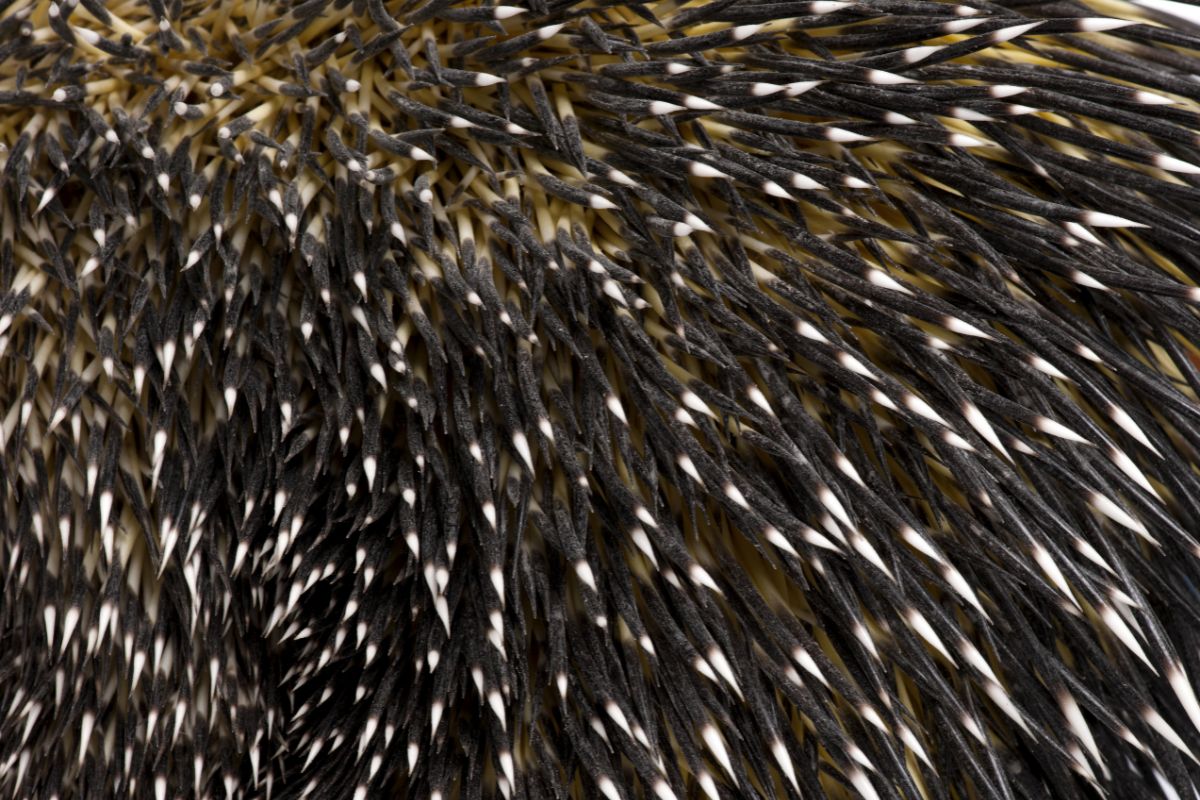 The quills of a porcupine are their second line of defense, and if the predator does not leave because of the pungent odor, be ready because the dangerous quills will already be standing up, ready to use. The quills or guard hairs are hardened by Keratin. Hardened Keratin is the same as our fingernails and the same as porcupine claws.

See also  Wolf vs Leopard - Which Would Win in a Fight?

The quills are hollow like a feather and have a very sharp point. The point has tiny burrs that go into your skin quickly if you get stuck but are very hard and painful to remove. So, if a predator gets quilled, they will know it.

In fact, that is how scientists know the predators of the porcupine, because they have found these animals with battle scars from the porcupine’s quills. A porcupine can have over 30,000 guard hairs on its body. The average size of the quill is about two to three inches, but the African crested porcupine, which is a giant porcupine and lives on the African continent, can have quills that are a foot long and as thick as a straw.

If a predator is still attacking the porcupine, it will curl up in a tight ball to protect its delicate face and abdomen, emit a stinky odor, and have straight standing up quills. The quills will be the only part that the predator can come near.

The Porcupines Stinky Scents Mark Territories and are Used for Mating

A porcupine is a creature of habit and will wander around the same general area searching for food and will mark their territory with very strong-smelling urine. So, it will be easy to figure out where a porcupine lives just because of the stinky smell. Porcupines rely on scent as communication during the porcupine mating season, which is in the late summer and early fall.

A female will use vaginal secretions to urinate in an area to let the male know that she is ready to mate, and the male will heavily mark the area with his stinky smell and urinate on the female’s urine spot. Males will also compete for a female and will fight for her. Once the male is picked, the male will perform an elaborate dance and spray urine over the head of the female.

No wonder porcupines are such stinky animals. Once the couple mates, the female will give birth to a single baby about seven months later. The family will live together during the rearing of their children, so they have a monogamous relationship.

Generally, the father will initiate the throwing out of the young as they mature and force the maturing male out first. Porcupines have excellent lines of defense, and the stinky smell of a porcupine is a fantastic deterrent to a predator. They are wild creatures, so it is best to leave this shy animal alone if you should see one or smell one in the wild.

If you don’t and are brave enough to go near this wild animal, you may very well be stinky and have a handful of quills stuck into your skin.