Gophers, or pocket gophers, are furry rodents that burrow through yards and fields in the Western hemisphere. They primarily live in the Midwestern and Western U.S. regions. Minnesota’s nickname is the Gopher State.

However, a few species of gophers can be found in the southeastern U.S. in the states of Florida, Georgia, & Alabama. This gopher’s color varies from gray or white to near black. The pocket gopher is so named because of its characteristic cheeks that are fur-lined and used for multiple purposes – to move nesting materials and food as needed, among others.

Gophers have poor eyesight and hearing, so they fundamentally rely on the sensory navigation provided by their whiskers to survive. The gopher’s unique environmental adaptation works – for them because much of their lives are spent in dark (or low light) living conditions. According to the New World Encyclopedia –

“Burrowing animals, pocket gophers are found in habitats with soil where they can create subterranean tunnels and that do not flood, including meadows, forests, deserts, and agricultural fields, including high-elevation habitats.”

Gophers are considered small mammals, although, in the rodent kingdom, they are considered somewhat moderately sized – 5 to 14 inches long and weigh a couple of pounds. The gopher’s flat body and powerful legs make it easy to dig and traverse the tunnels built beneath the surface that may cover upwards of 2,000 square feet. Gophers dig extensive and functional tunnel mazes where they live and store food.

They have four large incisors that never stop growing to replace worn-out teeth caused by incessant digging. The gopher’s large teeth are always visible because its lips are located behind them – preventing dirt from entering its mouth when digging.

Contents show
When Do Gophers Sleep?
How Active Are Gophers?

When Do Gophers Sleep? 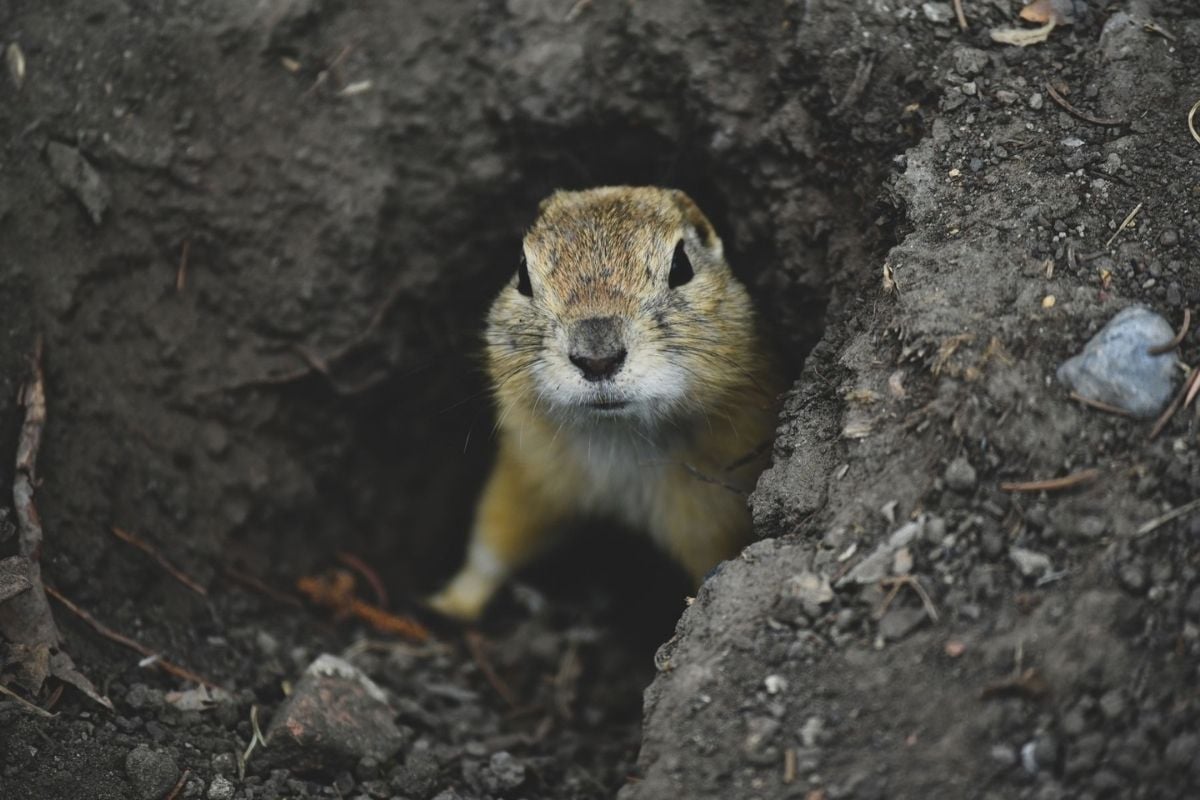 In general, gophers tend to be active all year, and for the most part, at any time of day. Yet, I rarely see one, even if I am lucky enough to spend a lot of time outdoors. As noted by the Arizona Sonora Desert Museum,

The fossorial (a.k.a. burrowing) gopher is a rarely seen animal because the gopher spends most of its life underground in its extensively constructed tunnels.

The gopher’s level of activity changes or adjusts as a result of the change in seasons rather than the time of day. While some gophers are nocturnal (active at night), gophers are largely crepuscular; a word derived from the Latin word related to the concept of twilight. Gophers and other crepuscular creatures tend to be active at dawn and dusk – when the overall atmospheric light is dim.

Twilight time offers the relatively defenseless gopher some needed protection from hungry predators in search of food. Gophers tend to live for up to three years, which is typical for small rodents. Their short lifespan is likely due to the gopher’s many predators – owls, coyotes, hawks, and others.

However, an overwhelming number of natural predators does not appear to impact the overall gopher population or their population sizes. And while their fan-shaped mounds of dirt are the telltale sign of the presence of a gopher or two, there are times when new mounds are not visible, even with gophers living nearby.

Pocket gophers are known to be most active during the spring months when they busily build 2 – 3 fresh mounds – the byproduct of the creation of new tunnels expanding the size of the gopher’s quarters.

And with more extreme weather and temperature conditions, the likelihood of seeing a gopher emerge from their warmer, safer homes drops significantly.

How Active Are Gophers? 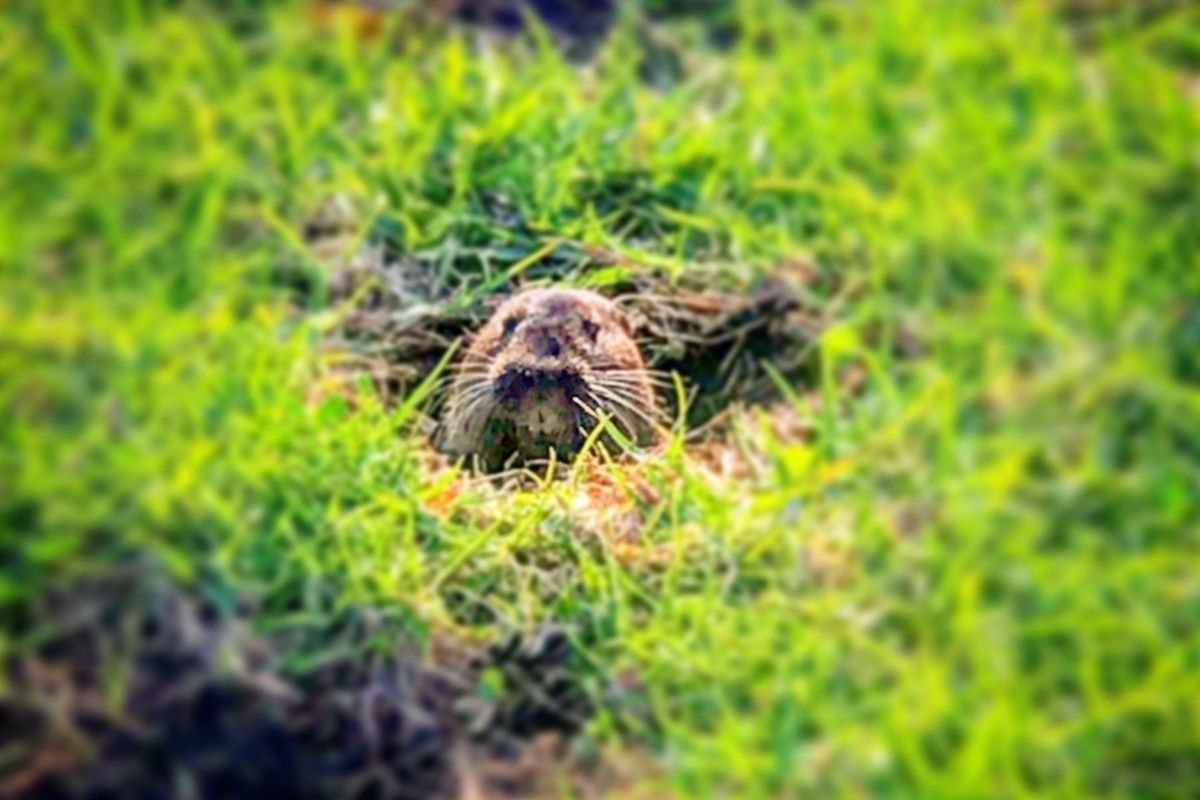 Gophers are active approximately nine hours every day at any time of the year-day or night. However, much of their time is spent foraging across a maze of tunnels and burrows, simultaneously performing a valuable ecological soil aeration service.

See also  Why is a Bear Waving at Me?

They forage or feed underground, gathering food in their handy cheek pouch to add to their underground food storage chambers for those times that are lean.

Gophers ingeniously pull plants into the tunnel from below – always hidden and out of the sight of predators. Despite their extensive maze of burrowed tunnels, gophers are not considered social animals (with other gophers) except, as one would expect, during mating and weaning seasons.

Pocket gophers are quite shy and timid creatures that seldom leave their personal underground system of tunnels.

They can have litters of 2 to 12 during the year. Gophers are quite territorial. They proactively fight anything that may endanger their home or food supply. Although, it is not unusual for other creatures to use gopher holes and tunnels – mice, snakes, toads, and lizards, among others.

Although gophers spend inordinate amounts of time underground, they do venture from their burrows to feast on plants (or push freshly unearth soil to the top) and such from time to time, but usually do not move far from the gopher to allow for a quick retreat to safety in times of danger.

Most likely, a gopher sleeps when it is tired and within the safe walls of its extensive maze. For some gophers, that may mean night, and for others, it may be daylight hours.