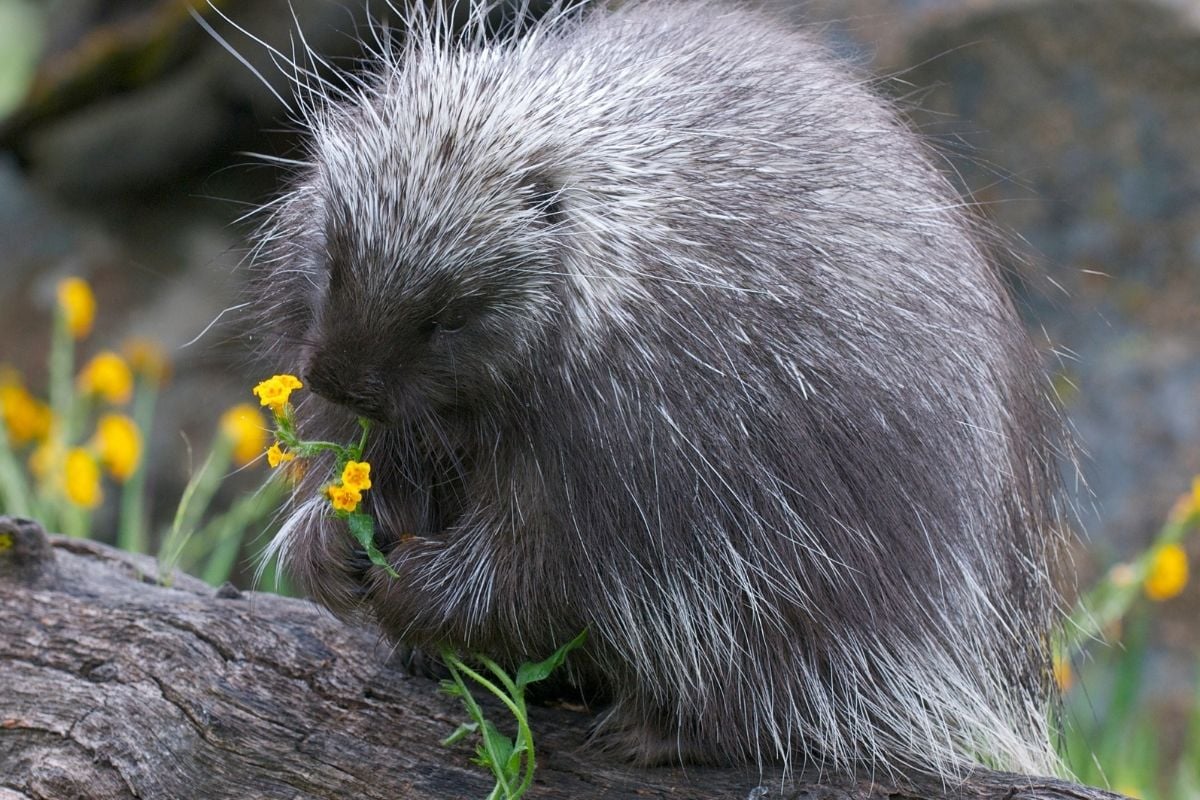 Porcupines have a long lifespan. They can live between 10 and 15 years out in the wild, while they can live up to 20 years when in captivity. Some have been known to live up to three decades. The funny or maybe not so funny thing is that these long-lived rodents can die from simple situations like falling out of a tree or getting hit by an automobile.

Their predators and sometimes a lack of food contribute to their mortality too.

What Defenses Does the Porcupine Use to Prevent Attacks? 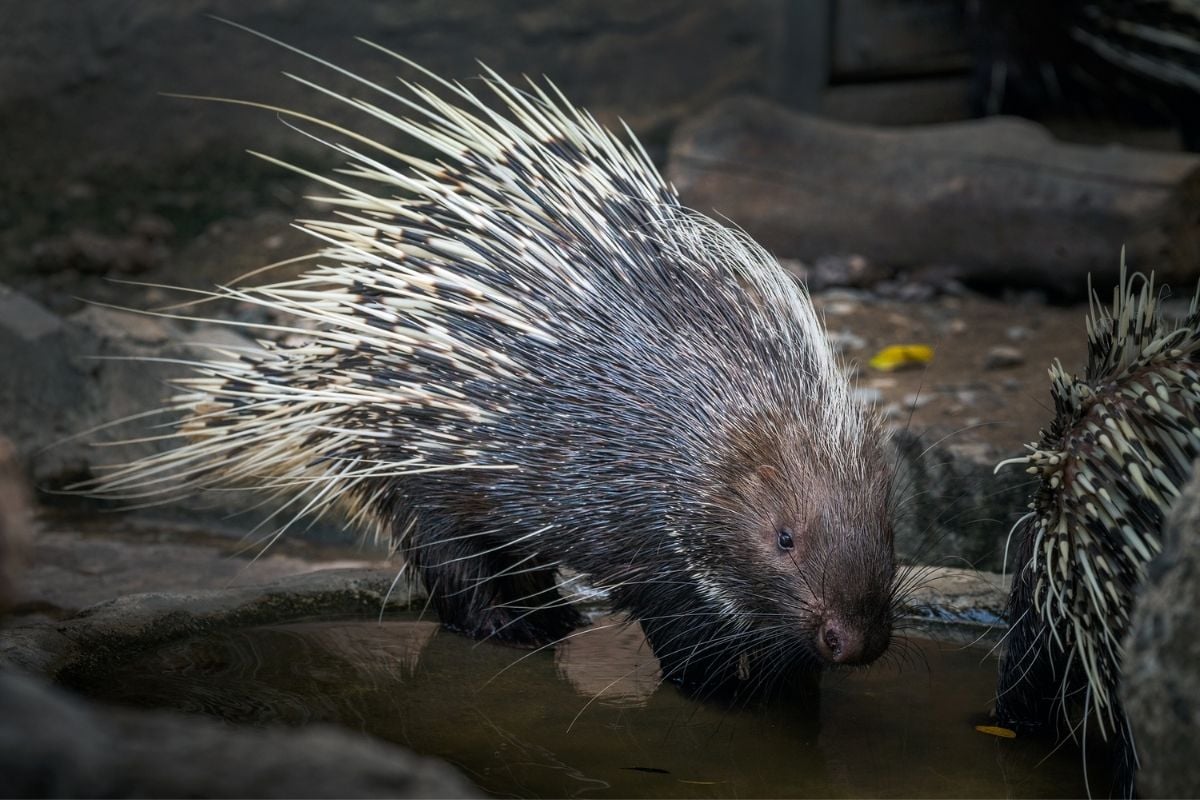 To protect itself against predators, the North American porcupine employs a variety of tactics. Aposematism is the cornerstone of the defense strategy. This creature emits a pungent warning stench that can get stronger when provoked. An adult porcupine can use its teeth to produce a warning clacking sound and bristle its quills to show a white stripe down its back when threatened.

As a last resort, it can use its quills if the other senses fail. When assaulted, an adult porcupine turns its back to the predator. The porcupine can swing its tail at an attacker’s face if it feels threatened.

The porcupine does not hurl its quills, contrary to popular belief. Once in touch with an attacker’s flesh, a quill can readily penetrate and implant itself. The minuscule barbs on each quill let it penetrate an attacker’s skin.

This approach is effective against the majority of attackers. It is common for an attacking species to flee with a face full of quills because of the danger it poses. When all else fails, the porcupine’s only option is to climb the tree.

What do Porcupines Eat? 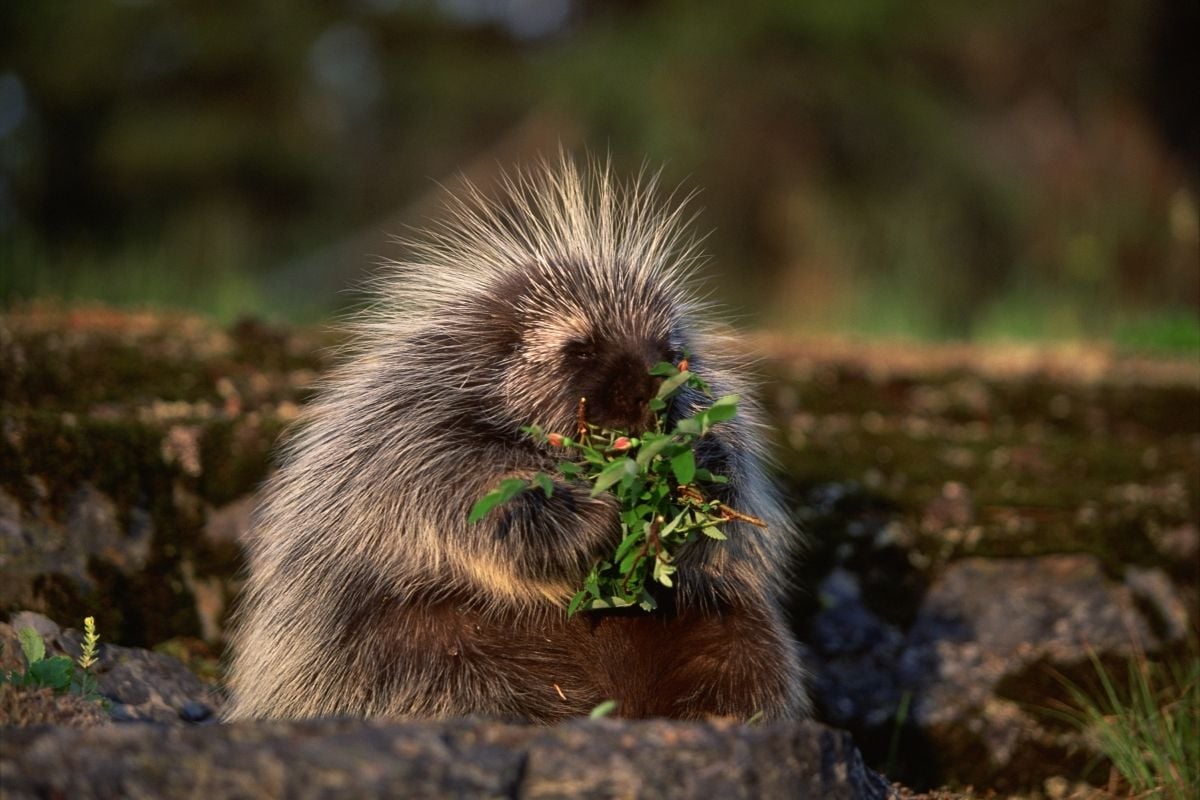 Vegetation, berries, stalks, roots, and branches are among their favorite summertime diets. Conifer needles and tree bark are the primary foods of choice in the winter months for these birds. Porcupines are picky eaters; for example, in the Catskill Mountains, out of every 1,000 trees, only 1-2 linden trees and one big-toothed aspen are eaten by porcupines.

How do Porcupines behave? 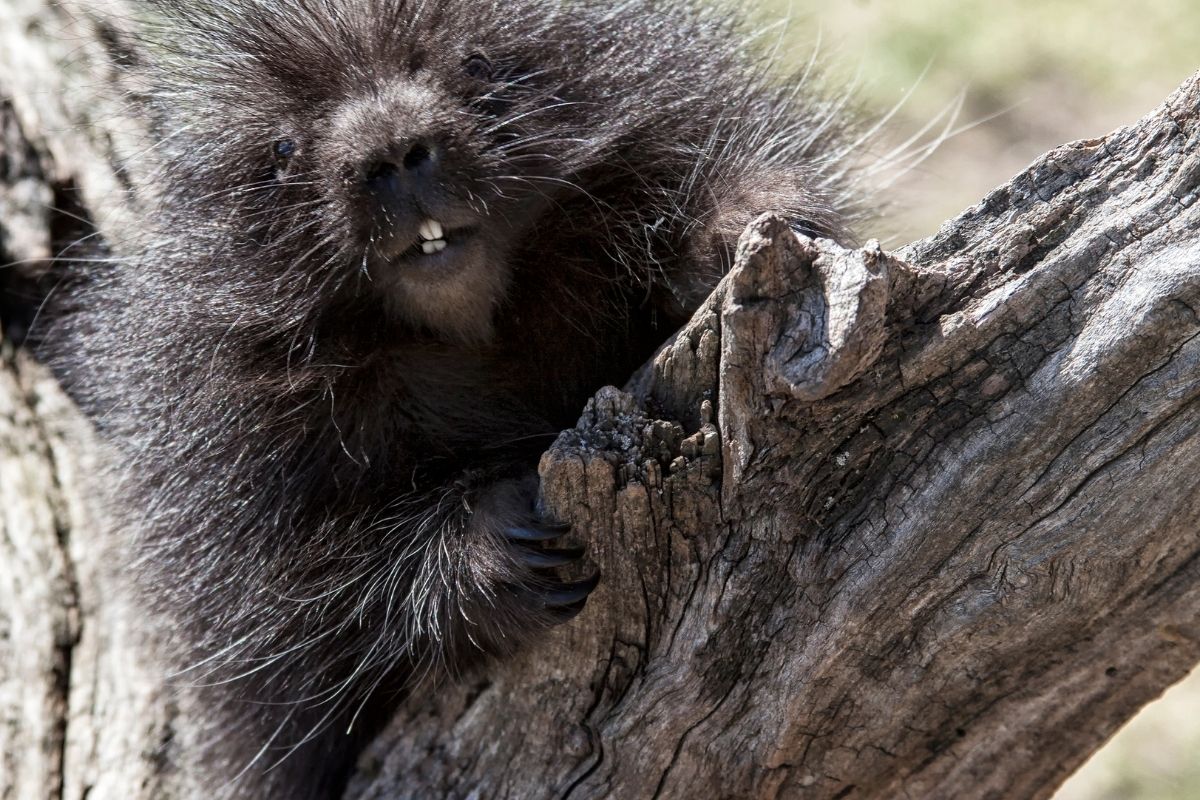 Porcupines have poor vision and move slowly. On summer days, they often rest in trees and are only active at night (nocturnal). Their dens keep them warm during the winter months by keeping them warm by keeping them close by.

Although many herbivores have to live in groups, the porcupine can enjoy a solitary life because of its powerful protection system. Porcupines have “an exceptional ability to learn complicated mazes and recall them for up to a hundred days thereafter,”.

Who Are the Predators that Help Shorten the Porcupine’s Lifespan?

Among the predators that have been successful in killing porcupines, the Fisher is the most common. Cougars, American black bears, wolves, coyotes, and wolverines are some of the species’ other natural predators, as are humans. Great horned owls and golden eagles are the only known bird predators of this species.

Even if the predator manages to kill the porcupine, they can be injured or even killed by the porcupine’s quills. The fisher is the most dangerous predator of the North American porcupine, which can weigh up to 12 pounds, 5.5 kilograms.

Why Are Fishers so Efficient at Catching Porcupines?

There are two advantages that the fisher has that make them effective porcupine hunters. Due to their excellent climbing skills, they can knock down a fleeing porcupine from the branches and bring it to the ground. The predator will circle and try to attack the prey as it tries to show its rump and tail to the attacker.

One study found that while male fishers are larger than females (on average weighing twice as much), they are more prone to prey on porcupines because of this. Snowshoe hares appear to be a preferred prey item for female fishers.

How do Cougars Attack Porcupines? 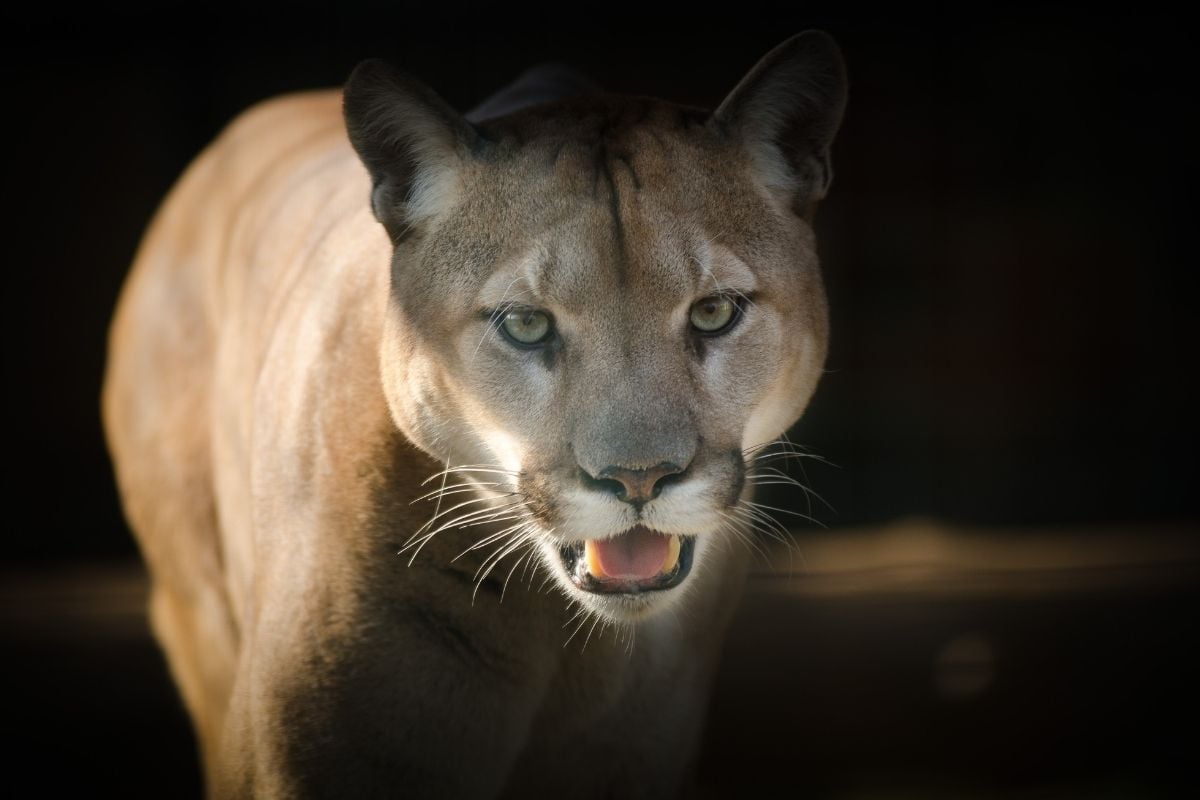 The cougar is another effective porcupine predator. Rather than avoiding the quills, it tries to avoid getting injured by plenty of them at the same time instead. Dozens of quills were found in the gums of some individuals with no negative effects.

Porcupines can climb trees, therefore it prefers to position themselves underneath them and knock them down, killing them quickly. Wolves and coyotes, as well as other canid predators, may attack, but they offer little danger.

Do Porcupines Kill Any of Their Predators?

Cougar predation in steep forests has significantly reduced porcupine populations in several sections of the Great Basin. However, porcupine quills have been known to kill cougars, but this is usually after the cougar has already eaten the porcupine. 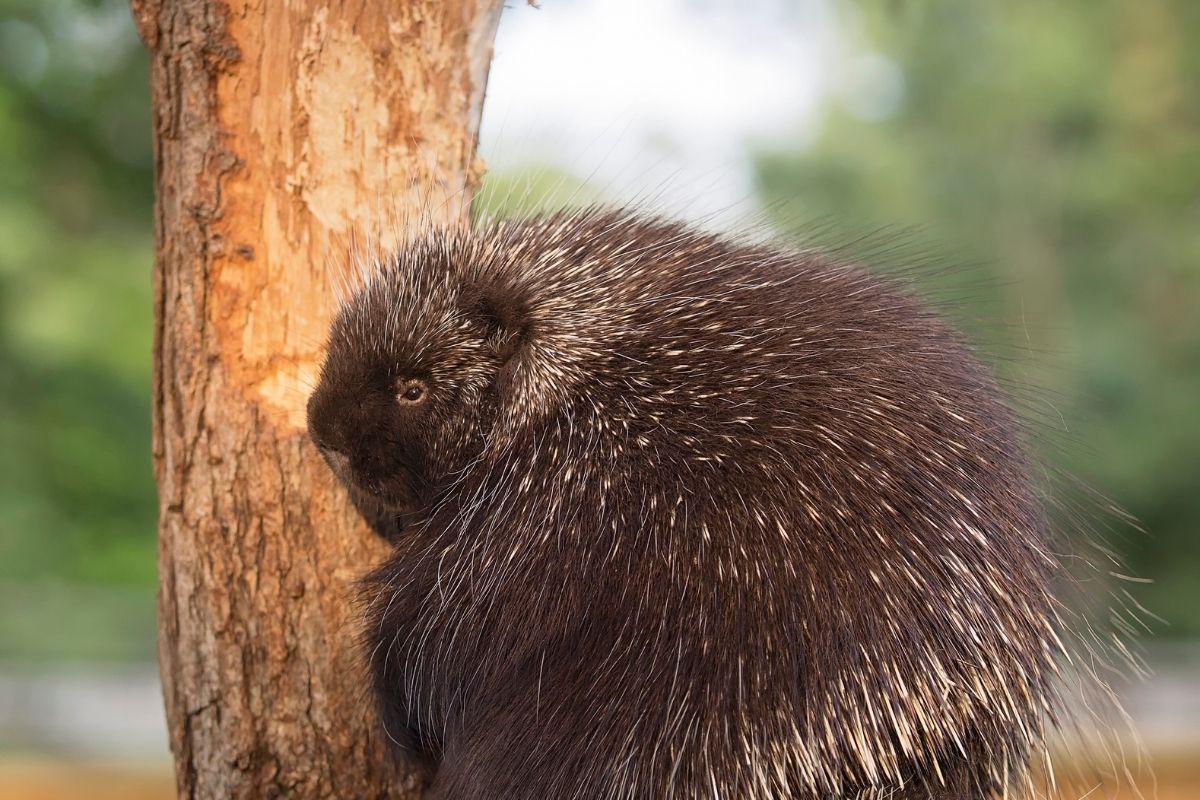 During the porcupine breeding season, female porcupines remain solitary for the majority of the year. They produce a viscous mucus that combines with their urine at this time. The resultant smell attracts the males nearby.

There is no guarantee that males who approach a female would initiate mating. Typically, the first male to appear sits on the same tree as a female, directly beneath her. One of the males may engage in combat if a rival comes close.

When a dominant male has achieved his goal, he will approach a female and spray her with urine. An average of 202 days is required for the North American porcupine to mate, which is longer than the gestation period of other rodents. Single-born porcupines are the norm for porcupines.

After the first two weeks of life, they weigh about 450 g, which rises to nearly 1 kilogram in the second. After the second summer, they reach their maximum adult weight of roughly 4.5 kg. Soon after birth, their quills become hardened.

All parental care is provided by the female porcupine. The young are entirely dependent on their mother for the first two weeks of their lives. After this, they learn how to climb trees and begin to gather food.

It’s during the fall mating season that they’ll keep nursing for up to four months.

How do Humans Help Shorten the Lifespan of Porcupines?

Humans decorate clothing and baskets with quills from these rodents. The native peoples of Canada’s boreal woodlands relied on porcupines as a winter food supply since they are edible. Because they travel slowly and have few dangers in their natural habitat, they are frequently struck by cars as they cross streets.

In the world of camping, porcupines have been dubbed the salt-loving creatures because of their penchant for consuming road salt-covered boots that are left outside of tents overnight. Foresters of all stripes know them for their penchant for gobbling up sweat-soaked gloves and tool handles.