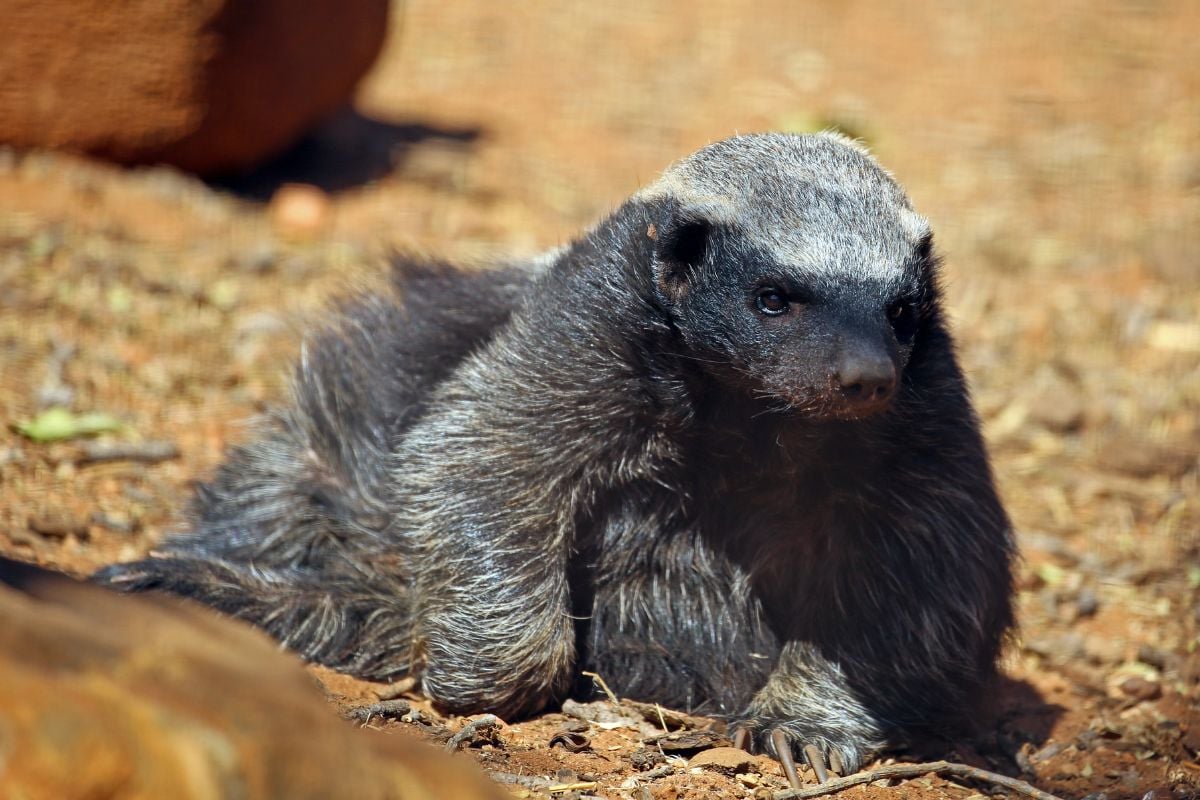 Honey badgers are so solitary and aggressive in the wild that little is known for sure about the lifestyle of this nocturnal weasel.  The honey badger, or ratel, roams most of Sub-Saharan Africa, much of the Middle East and the Arabian Peninsula, the Indian sub-continent, and much of eastern Eurasian Europe.  They are land-based animals able to occupy various habitats where they can burrow or shelter in rocks and caves.

Honey badgers range from 24 to 30 inches long and about 18 to 30 pounds.  Males are larger than females by about one-third.  They are stocky with short cubby legs that curve outward.

With a white back (often scarred in older males) and a black body, the honey badger has thick loose skin protecting them from a predator’s grip.  They have strong, large claws suitable for digging and holding pre on their front paws and a bite strength that far exceeds that of the American black and brown bears.  They are very powerful diggers.

Males are boars, females are sows, and young are kits. Very little is known about young honey badgers, though those born in captivity have been born hairless and take three months to develop a full coat.  There has been only one well-documented study in southern Africa. 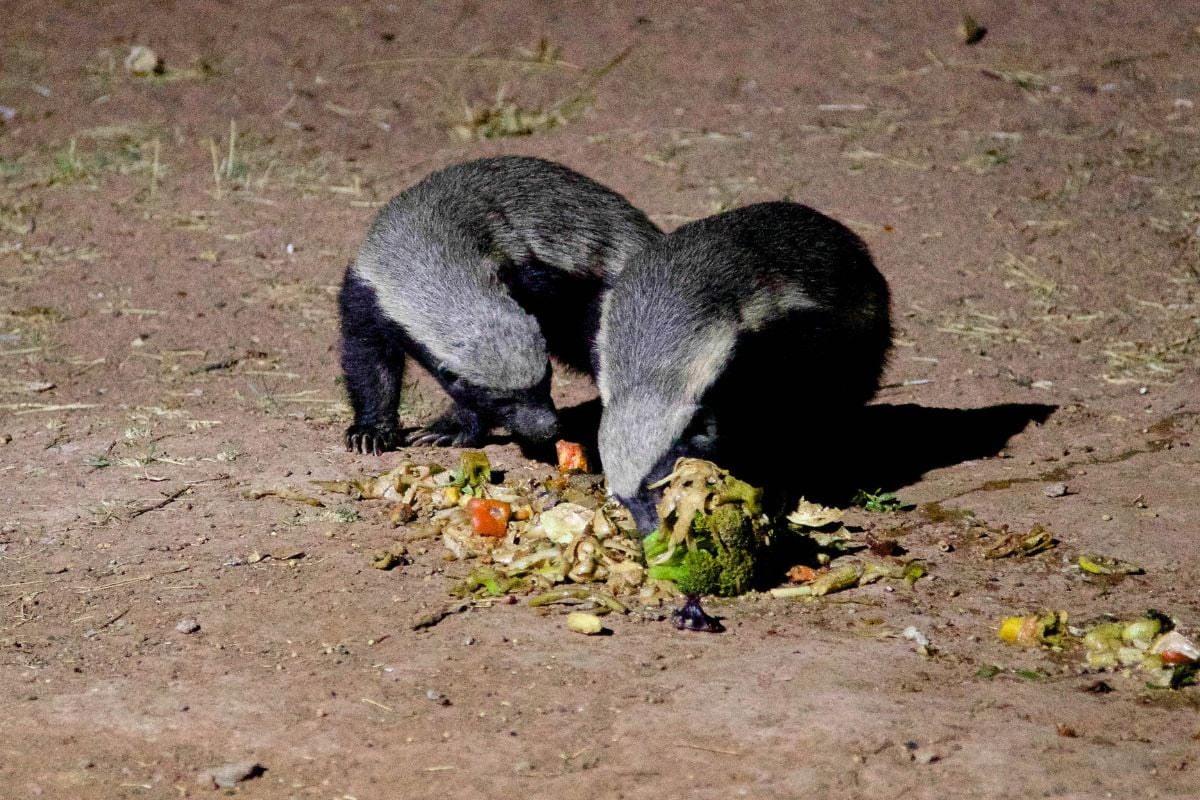 The males must compete for mates because females focus on their young for 12 to 16 months.  Dominant males are heavier and have larger testes, but this does not guarantee mating success.  Mating occurs in burrows and therefore has been rarely observed.

See also  The Noises Raccoons Make and What They Mean

Females are sexually mature at 12 to 16 months, while males do not reach maturity until two to three years. The mating is aggressive and accompanied by play fighting.  Females often exhibit submissive appeasement behaviors and present to the male.

Males have been known to protect their partners aggressively in the wild.

Honey badgers do not appear to form pair bonds.  They are not monogamous, and males do not assist in raising the young.  When groups are spotted together, they usually turn out to be groups of males in search of females.

These males will compete for the chance to mate if they find estrus females.  Since the young stay with their mothers for more than a year, they may account for pair sightings in the wild.

Females are in estrous for a minimum of two weeks at a time.  Mating can occur any time in the year but mainly from September to December.  The mother carries her young from 50 to 70 days and then gives birth, reportedly, to one or two young.

A single kit appears to be the most common.  The cubs are born in the burrow and remain there for their first three months when they are weaned.  Thus, very little is known about newborns.

Females care for their young for one to two years.  When leaving the mother, female cubs tend to travel much further from the birth location than do the males. There is some suggestion in the literature that honey badgers can utilize delayed implantation, a process seen in related species.

Other studies disagree.  This possible ability may be why accounts of gestation periods vary wildly. 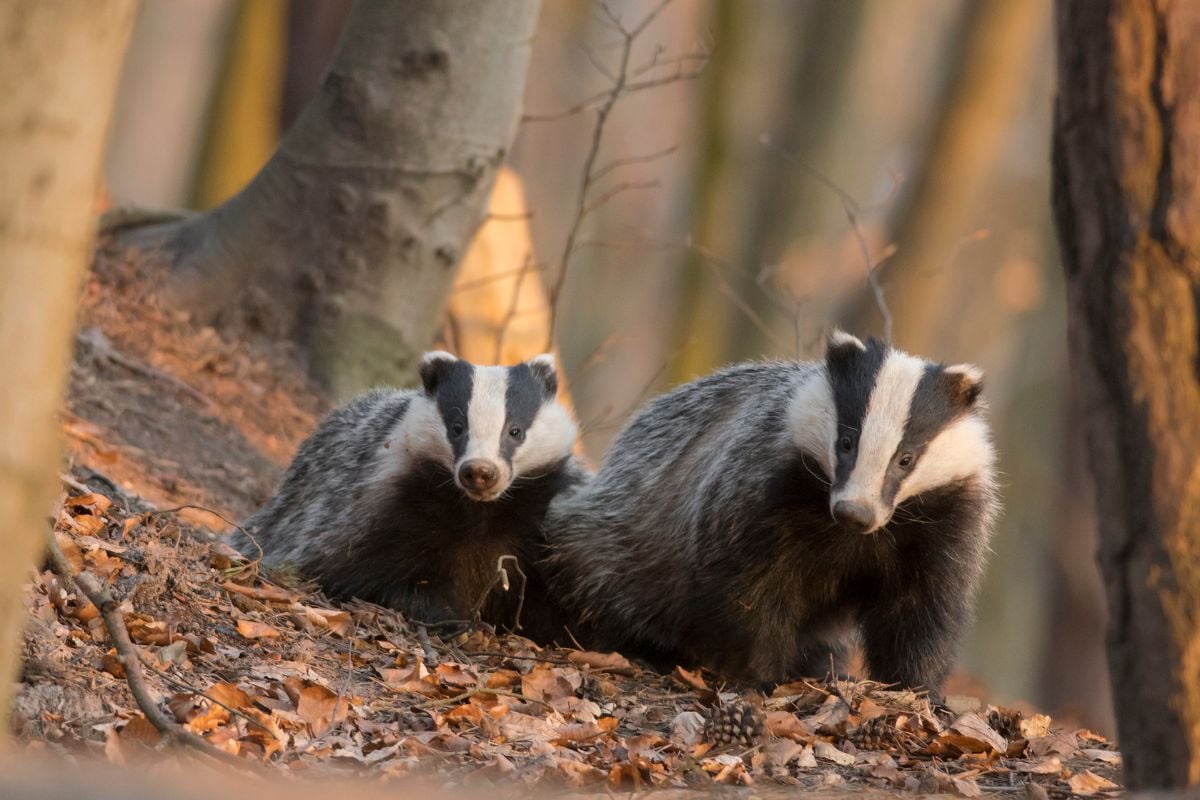 The young are blind and hairless and cared for solely by their mothers.  The mother relocates the den frequently, carrying the cub in her mouth.  At about three months old, the cub begins to join its mother in foraging.

At that point, they change dens nightly. Infant mortality is estimated at nearly half through starvation and predation. In the wild, honey badgers live about seven to eight years; in captivity, they live well into their 20s. 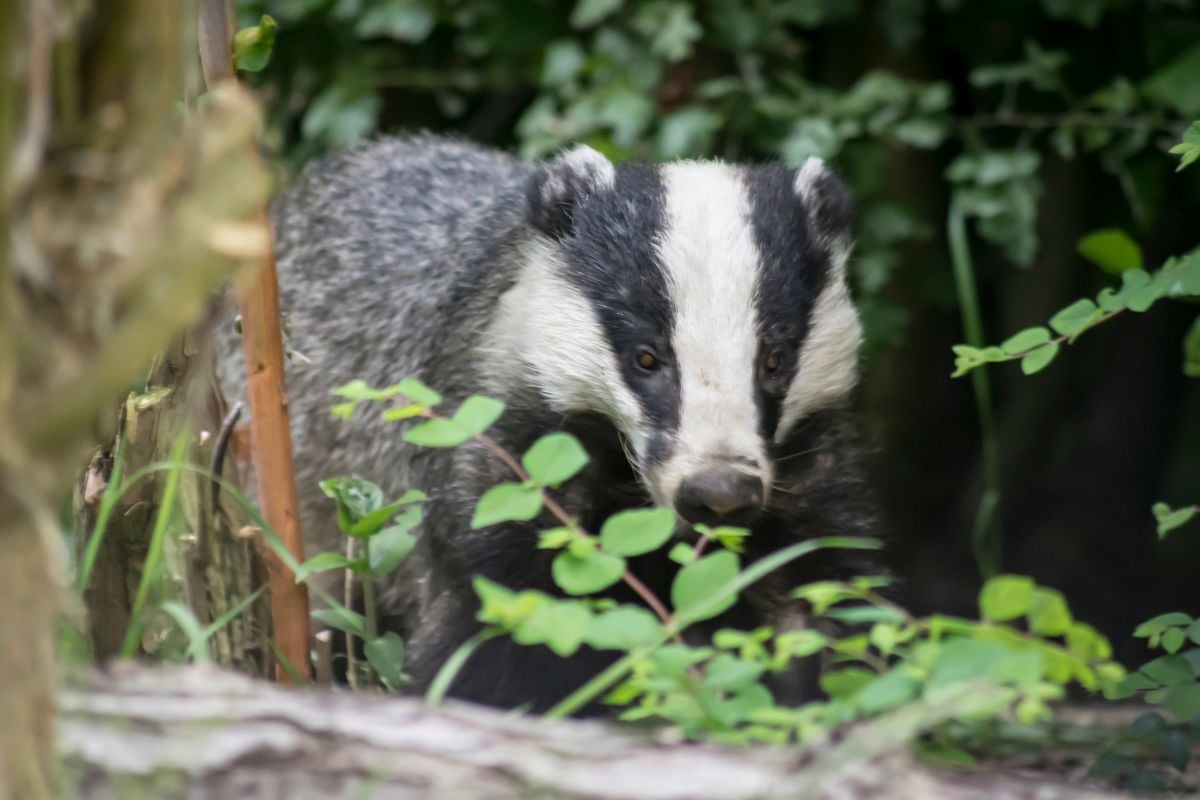 Solitary and nomadic, honey badgers have an extensive range of 6 miles a day, while males may move as many as 20 miles.  Male and female ranges tend to overlap.  Males do appear to have a greeting behavior when meeting in the wild and have been known to mark their burrows and the surrounding area with urine and scent.

Males will defend their mates with unbelievable ferocity in response to a threat or upon an attempt to enter a marked burrow.  They have been observed engaging in a dominance dance to determine ownership. Their top speed is unknown, but they have been clocked at nearly 20 miles an hour.

Honey badgers are omnivorous but mainly eat eggs, small rodents, snakes, birds, and frogs.  They have been observed eating bees, including African killer bees, honey, and some fruits and, when food is scarce, carrion.  They are highly intelligent and use tools widely.

Although they don’t care for humans (or anything else, really), they do appear to enjoy living near human settlements. Not much preys on honey badgers, although lions, hyenas, and leopards will kill older and weaker animals.  They are known to attack anything attacking them and are fierce fighters.

If escape is blocked, a honey badger will viciously attack whatever is attacking it and fight until death or the attacker walks away.  The Guinness Book of World Records lists it as the world’s most fearless animal. If kept with humans, they do not become tamer over time, making them highly unsuitable as pets.

They are not friendly at all and will most likely attack you and your other pets if given a chance.

So far as can be proven, honey bears: