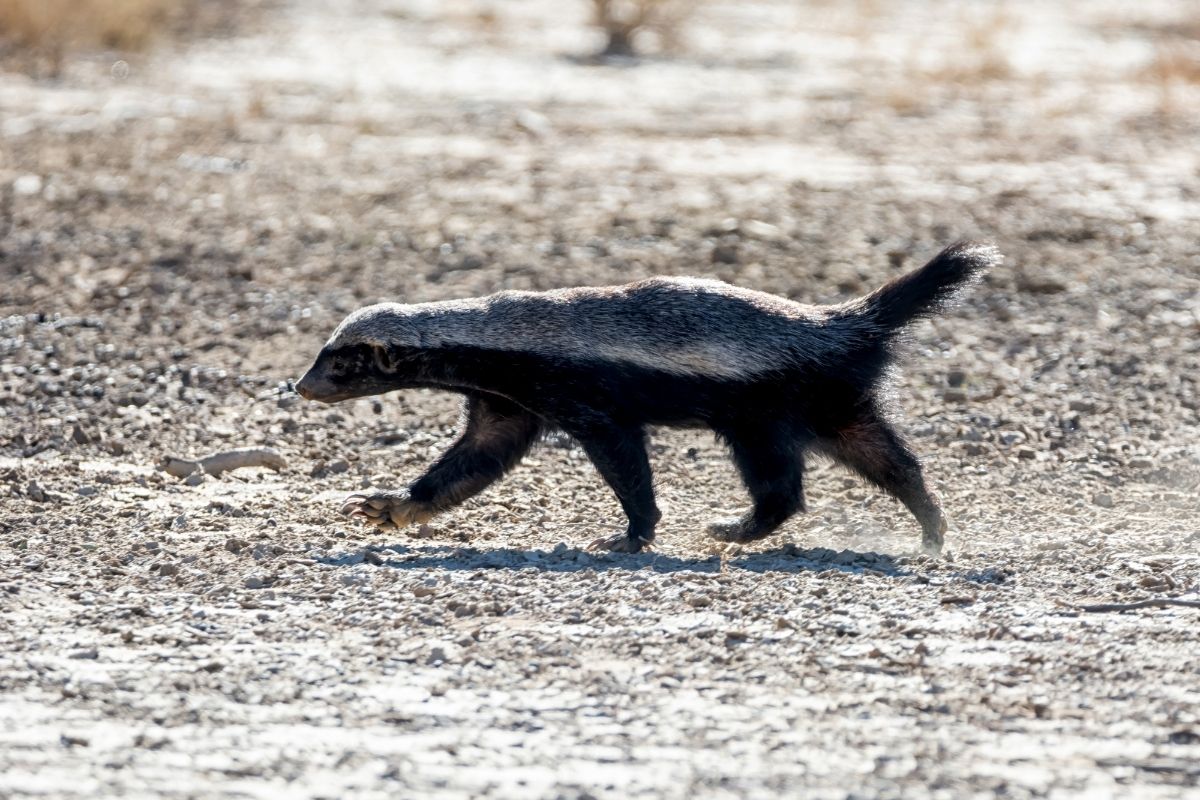 Honey badgers, in addition to being incredibly fierce, aggressive, and grumpy, are surprisingly smart.  They have a large brain for their body size.  They are also one of the very few non-primate species that use tools, widely considered to be a sign of high intelligence by us tool-using humans.

Watching a honey badger figure out that moving something to stand on it will allow them to get to high food is quite amazing – you can actually see the badger thinking, understanding, and planning. They appear to be able to get out of almost anywhere.  A famous, captive-raised honey badger named Stoffle, whose owner has published several videos about Stoffle’s ability to escape from virtually any enclosure.

Fascinating to watch, these videos show Stoffle planning, trying, and retrying, all in pursuit of gaining enough height to climb over the wall of the enclosure his owner calls the honey-badger Alcatraz. They have a large brain for their size, which is evidence, but not proof, of intelligence.  More importantly, they have been seen using tools to make bridges, open cages, and increase their height to get over a fence or wall.

Honey badgers haven’t been tested much for intelligence; they are far too aggressive and self-directed to be interested in proving anything to humans.  They really don’t like anyone very much and have been known to attack a ranger’s vehicle of a ranger trying to show one-off to some tourists. The internet has been fascinated by the career of Stoffle, a honey badger raised at the Moholoholo Rehabilitation Center in South Africa.

The clips show Stoffle, sometimes with his female friend, engaging in successful escape attempt after successful escape attempt. Stoffle uses tires, rakes, logs, rocks, mud, and his female friend, as tools to get out of his “escape-proof” enclosure.  Thus far, nothing has kept him in, and he’s even broken into the home of the man who built the enclosure.

Watching Stoffle plan and calculate and adjust his escape tools, one cannot avoid the conclusion that he is thinking, that he is manipulating these found objects as tools, every bit as knowingly as a chimpanzee uses a twig to get termites out of a nest.  Animal behavior experts have been surprised by Stoffle’s efforts and are reconsidering what was clearly an under-estimation of honey badger intelligence. What Stoffle’s escape appears to illustrate is that his species is capable of problem-solving by mental trial and error.

The animal runs through scenarios in its head, trying to determine which will work.  Experts wonder whether this complex problem-solving behavior, previously found only in humans, dolphins, chimps, and corvids (crows), signifies honey badger intelligence.  Unfortunately, no one has done any formal studies of honey badger intelligence, meaning that, essentially, Stoffle is, for now, virtually the whole story about honey badger brains.

As one expert opined, “Almost everything we know about honey badger behavior is muddied by a total lack of data.”  For example, honey badgers have a reputation for ripping off their opponents’ testicles.  No one, however, has ever confirmed this by observing it.

Their impervious skins, immunity to venom, and reputation for playing dead are all based on hearsay, not observation. However, one of the challenges of engaging in such studies is that there are very few honey badgers in zoos or rehab centers throughout the world.  Observing them in the wild is not a much better option either since this is an aggressive, hostile, secretive, solitary nocturnal animals.

Contents show
Not Your Pavlovian Response
Not Your Average Thinker
Conclusion

Not Your Pavlovian Response

Classically, a hungry chimp once poked a twig down a termite nest and realized how useful that can be.  Similarly, macaques in Japan learned that sitting in hot springs can make winter much more tolerable. Another fascinating (and frustrating to bird lovers) example of operant learning is the never-ending challenge of keeping squirrels out of bird feeders.

They appear impossible to defeat as they overcome every single obstacle placed between them and the food.  However, they do not appear to use tools to accomplish their goal.  These behaviors give the user a competitive advantage, and others will copy the behavior, which becomes part of what is virtually a culture.

Not Your Average Thinker 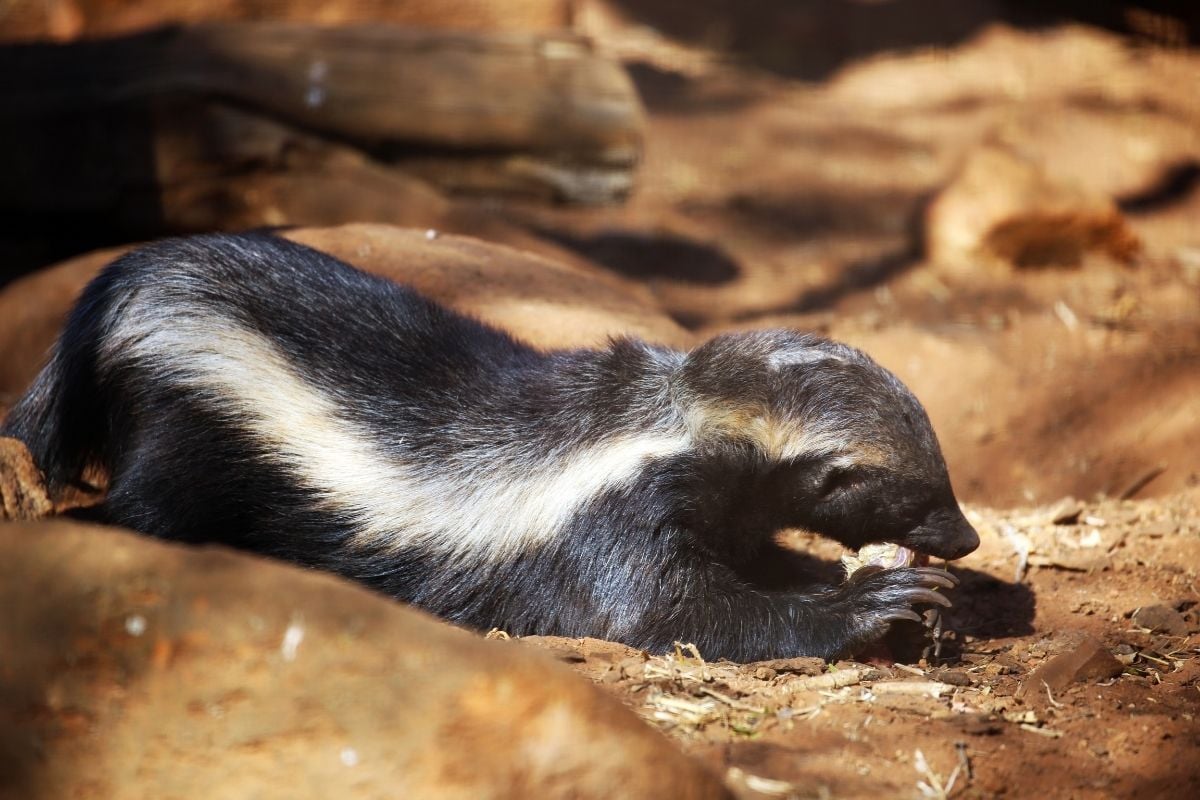 Honey badgers, whatever tools they’re using, aren’t likely to create a culture if, for no other reason than that, culture requires an ability to tolerate others of one’s kind.  Nonetheless, some observations of tool use in the wild have been made, and Stoffle, of course, has riveted animal intelligence experts.  Indeed, one researcher has referred to the “stupendous intelligence of honey badgers” in arguing that intelligence studies should not focus on primates and human concepts of mind.

A long-term tech company founder and startup investor Josh Linkner even takes the honey badger as a guide to success in life and business.  Like the honey budget, Linkner says, we should be:

Linkner’s business model is just that, a model.  But it is also a good presentation of how honey badgers face the world.  They don’t like anyone much, including their own kind, though there is some anecdotal evidence that they will occasionally like a particular human or another honey badger.

They ask the world to take them as they are or be prepared to fight about it and fight to the death.  Following a solitary, nocturnal lifestyle, honey badgers have been around since the middle Pliocene, with extinct relatives dating back at least seven million years.  Unless too many people think them on the head with bludgeons or shoot them, these delightfully intelligent animals may get another few million more.

Honey badgers are known for being aggressive, grumpy, vicious, and persistent, but not so much for being intelligent.  Perhaps, as one author said of honey badger intelligence,  maybe everyone was too busy trying to get out of their way to look for it.  And if you do see a honey badger, just enjoy it: but don’t get attached.

As has been said, the beast won’t give a damn whether you like him or not. Just stay out of its way.