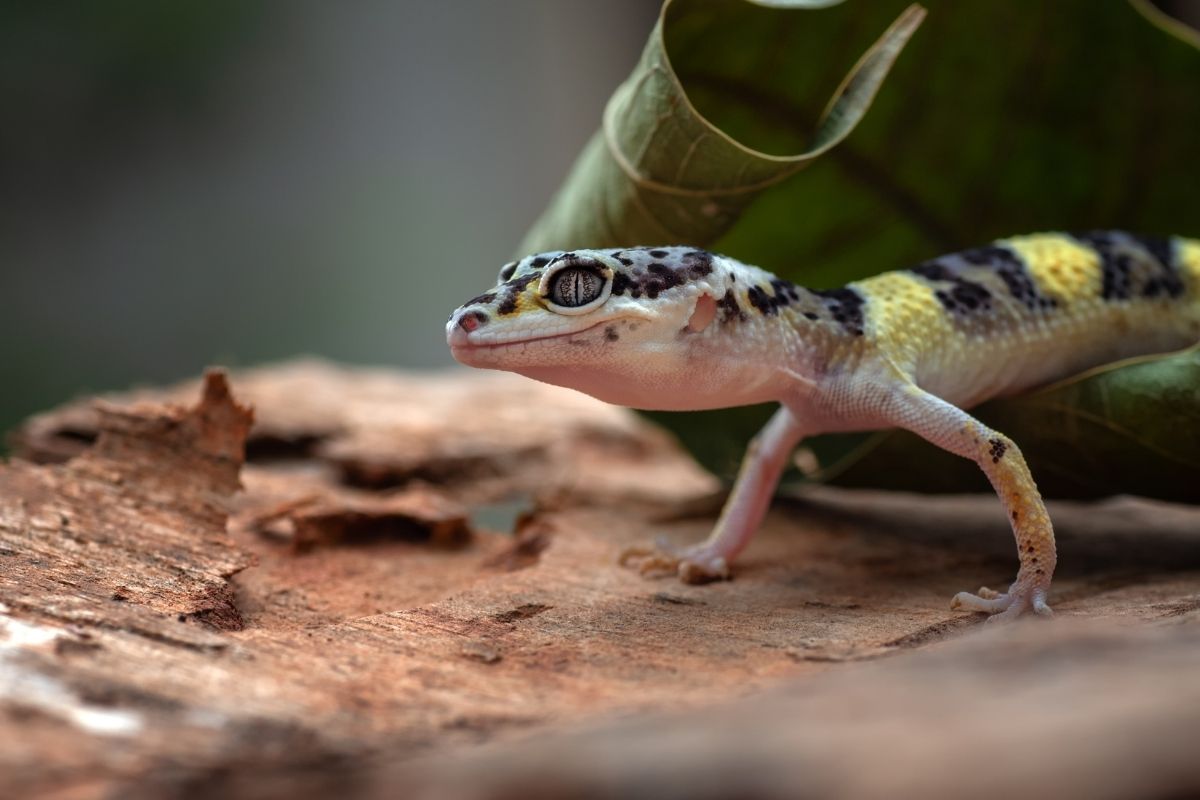 The geckos may have been popularized by an advertisement on TV, but they are cute little animals. It’s easy to see why someone might want one of their own. They are lizards and have a wide variety of shapes, sizes, and habitats.

They are reptiles, so they prefer warm weather, and live in places like rainforests or deserts. They range in size from just more than an inch to over a  foot long. Most of them do not move fast and are not active.

They are easy to tame and becoming more popular as pets. They live all around the world in warm areas. Geckos like to eat insects, and they do not need to eat every day, which makes them easy to care for. 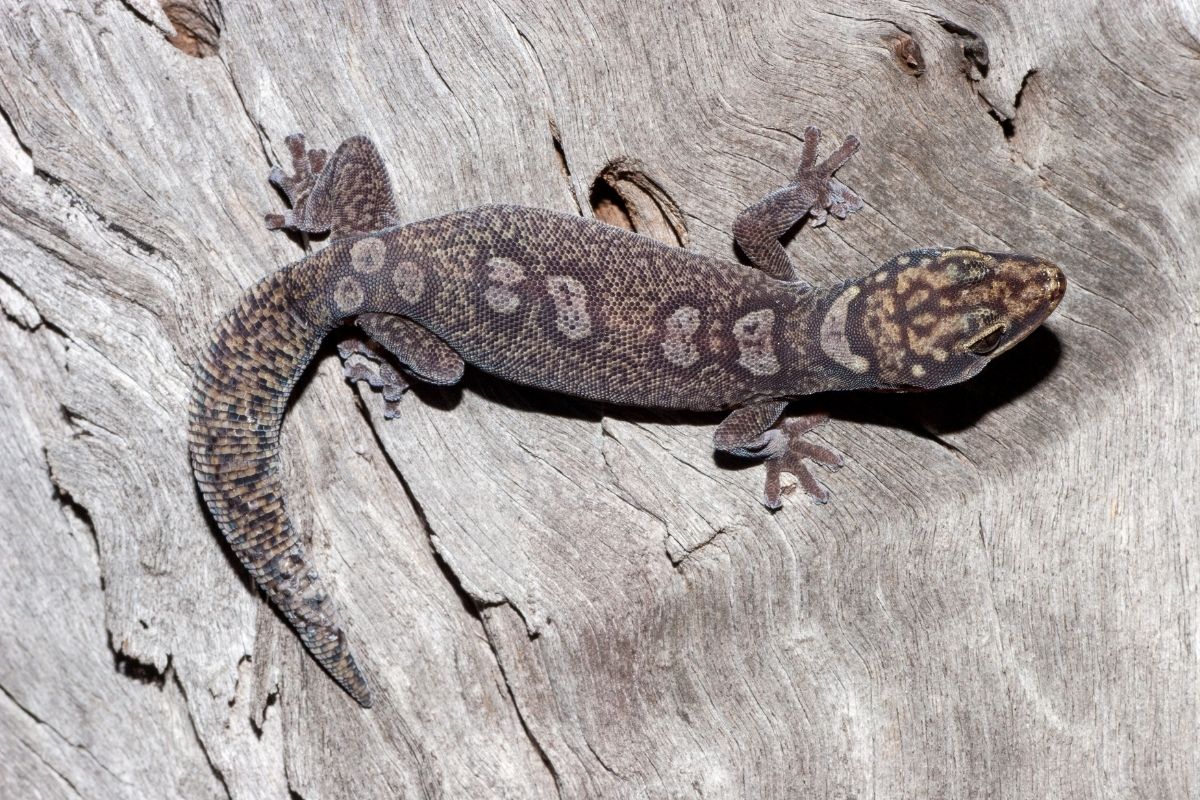 The Carphodactylidae family of geckos live in Australia. There are seven genera and a few dozen species in this family. These have padless feet, which allow those that have them to climb more easily.

Without pads, these geckos must use their fingers and claws to climb. There are the chameleon Carphodactylus, and others are differentiated by their tails with names like thick tail, leaf tail, and knobed tail. They are among the larger geckos at about six inches, half of which is the tail.

Geckos in this family prefer wet and warm climates, but they have been found in all areas of Australia. Many have colorful tails which separate them by species. They eat insects and may only eat every three or four days.

They can survive for as long as two weeks without food, using fat in their tails. Geckos can live 20 years in captivity, and more species are being kept as pets. Many are active during the day, in the morning and evening.

These different genera are found in different areas of Australia, except for the Nephrurus, which are throughout the country. The Undweroodisaurus is on the south coast, and the phyllurus is on the east coast. They typically lay two eggs a couple of times a year.

Genera of this family include:

The Diplodactylidae family of geckos is the most diverse family, and they are spread out from Australia to New Caledonia and New Zealand.  There are 150 species and 25 genera, so it is quite a large family.  They like to live in rainforests in warm areas.

They live in trees for the most part. They have been found in some of the cooler areas of southern New Zealand. One unique thing about this family of geckos is Viviparity, which means their young are developed inside the body.

Most reptiles lay eggs. They all have pads on their feet to help with climbing. Since they have evolved on different islands, they have each developed some features that only they have, so there are three groups of geckos as a result.

Like other geckos, they eat mostly insects and will eat leaves at times. Of the 149 known species, 30 are on the endangered list, and 28 are listed as vulnerable, mostly due to changes in their environment. They are also known to eat snails and worms.

See also  Do Porcupines Shoot Their Quills? How Do the Quills Work?

New Zealand geckos in this family tend to be gray and have long limbs. There is a wide variety of colors, going from the velvet gecko, which has a reddish tinge, to green ones, gray ones, and geckos with multiple colors. 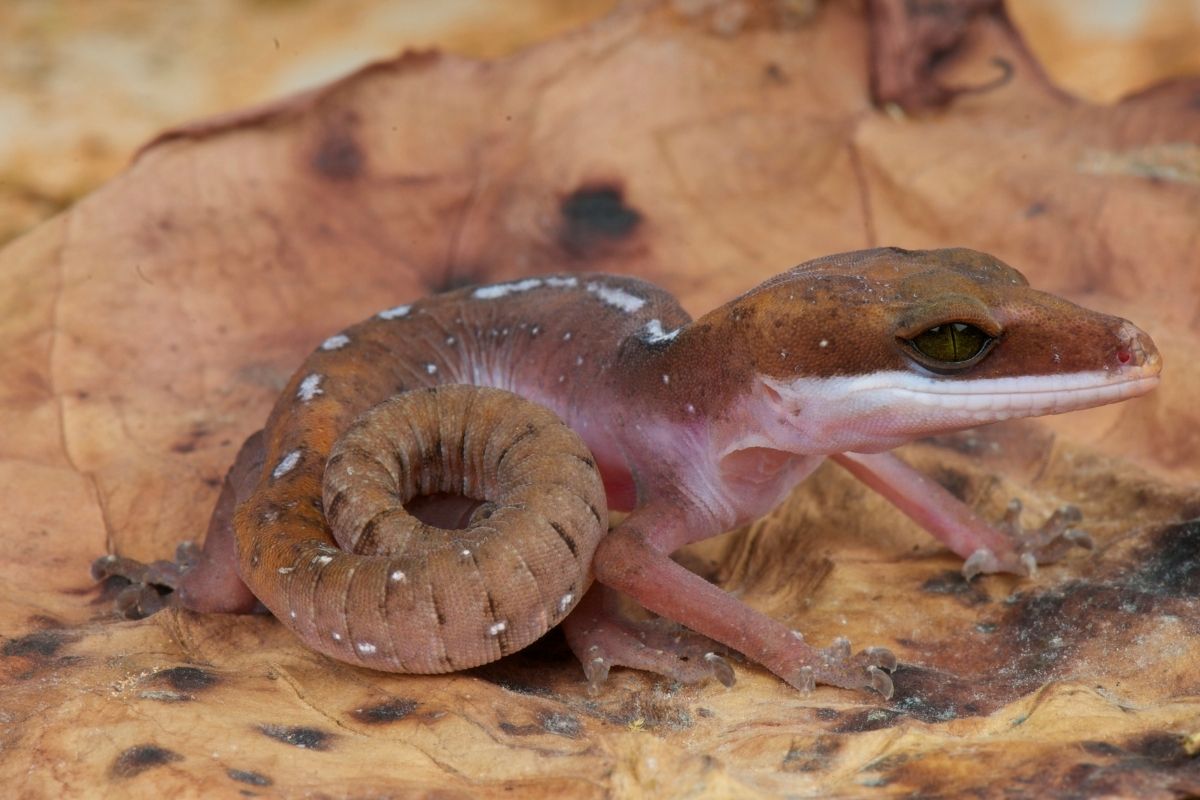 The Eublepharidae family of geckos has six genera and more than 40 species. They live in North America, Asia, and Africa. This family of gecko does not have pads on their feet for climbing, and they have movable eyelids, something most others do not have.

Some of these are popular pets. These geckos tend to like deserts. Five species live in the southwest American desert, and they live in the Asian deserts from Iraq to India.

They live on the forest floor or on rock outcroppings. They have granular scales dispersed over their body. They have large eyes compared to the size of their bodies, most of which are around five inches.

One member of this family is called the cat gecko. It is brown and small and curls up like a cat when it lays down. The banded gecko has brown and white stripes while the leopard gecko has spots like a leopard.

There is a similarity in appearance, and many are differentiated by their coloring or patterns. The Leopard gecko and the African fat tail gecko are popular as pets. The fat tail one gets its name because of its large tail.

These geckos eat insects and do not need to eat every day. They live between 10 and 20 years. 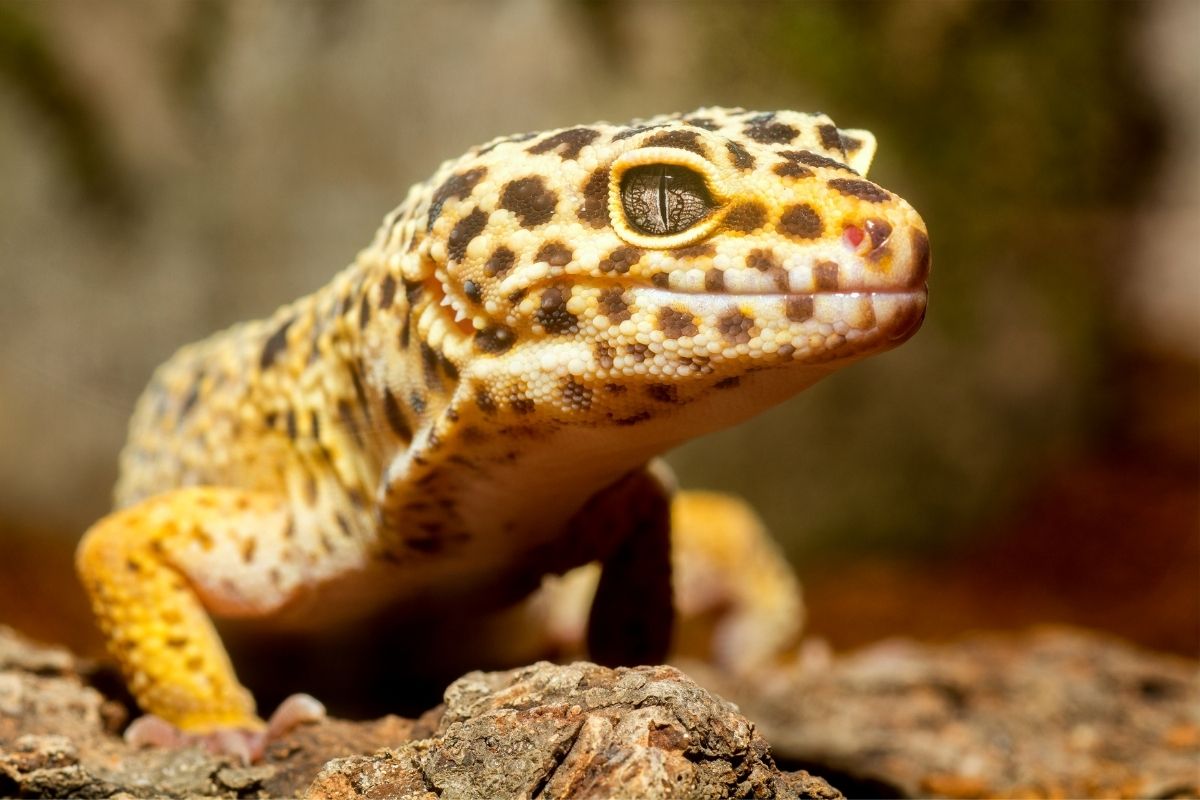 The Gekkonidae family is by far the largest family of gecko, so much so that members of this family are often called the common gecko. There are 950 known species and more than 60 genera. They live all over the world but tend to stay in tropical areas.

Some of these have toe pads to help with climbing and some do not. Partly because there are so many kinds, Gekkonidae family geckos are popular as pets. They do not move around a lot, they are easy to tame, and are easy to take care of.

They don’t need to eat every day and they like insects. These lizards can grow to 10 inches, but many species remain at around five inches. They often have drab coloring, stocky but flattened bodies, and big heads.

While there are well over 900 species, about 15 are listed as engendered. They have movable eyelids and an eye cover that is transparent and sometimes called glasses. The smallest gecko in the world belongs to this family.

That would be the Jaragua Sphaero, which lives in the West Indies, and is just less than an inch long. The largest in the New Caledonian variety gets to 10 inches. These geckos have the advantage of well-developed claws as well as pads on their feet, so they are excellent climbers.

They need places to lay their eggs. Often they will live in rock crevices or shallow tunnels. Many of these geckos do very little parental care, and some basically raise themselves after they hatch from an egg.

They are solitary except during mating season. 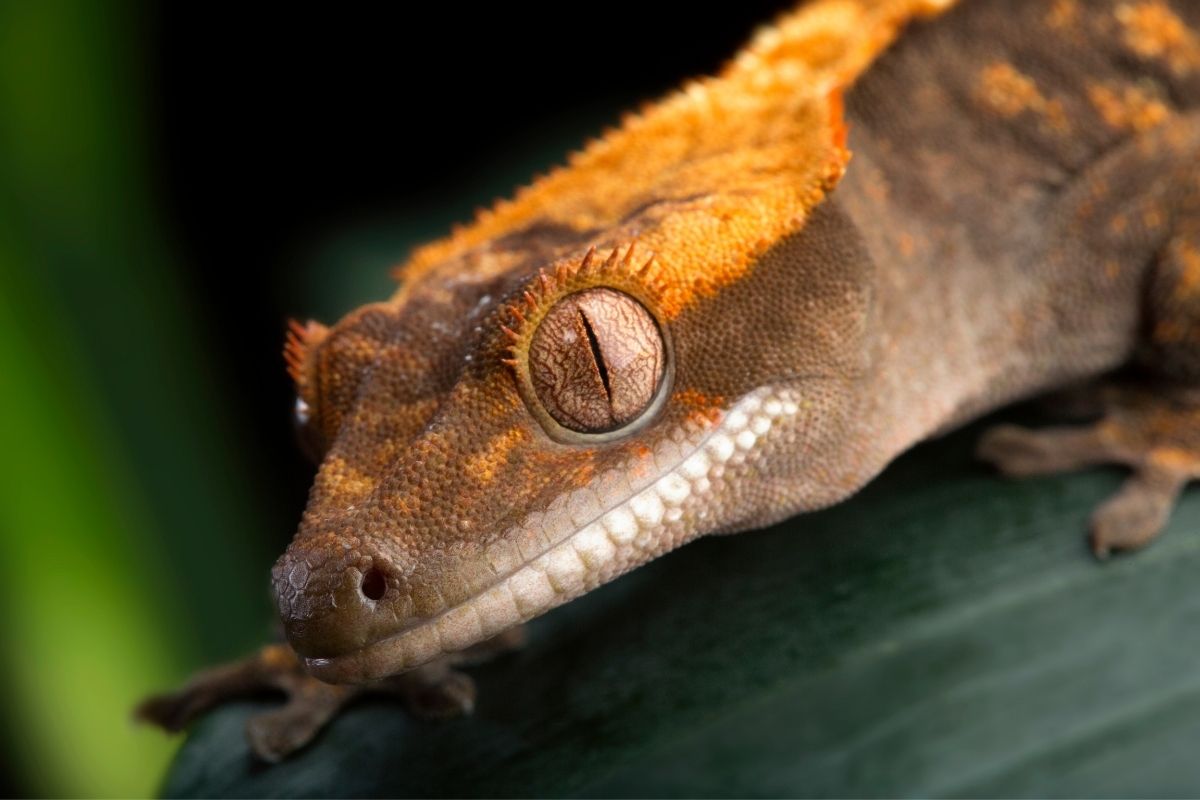 The Phyllodactylidae family is a family of 10 genera spread across the southern hemisphere. Many of the species live in all parts of South America, and in Africa. They are generally brown in color with various markings.

They fit in well with the desert-type environment that many of them prefer. One popular member of this family is the Phylladactylus, or American gecko. They are also called leaf-toed geckos to differentiate them from other geckos in the same area.

This gecko lives in the southwest and along the west coast of Mexico. Some are in South America. Like others, they eat insects of various kinds and will eat fruit at times when available.

They will also eat snails and worms at times. They do not need to eat every day and can go more than a week without eating. They store fat in their large tails.

They like to live in crevices of rocks or under leaves or bushes. They prefer warmer climates but have a wide range that goes into some mountains of South America. Most of these lay eggs, and the mothers spend very little time with them after they hatch.

They are solitary animals, but tolerant of each other when they are close. The female lays two eggs and takes minimal care of them when they hatch for a very short time. The male is not involved.

They are docile, but they are not social creatures.

The pygopodidae family is geckos that have no limbs, or if they do they are very small and of little use. They are called snake lizards and are divided into two subfamilies. This family lives in Australia and New Guinea.

There are several genera and more than 30 species spread throughout Australia. They are similar to snakes, with long slender bodies and no eyelids. Unlike snakes, they have a straight tongue and external ears.

Most have no front limbs and have small, flattened limbs in the back. They eat insects and like to live in clefts of the rock. Like geckos the female lays two eggs, can lick the clear spectacle skin on their eyes, and make sounds similar to that of a gecko.

They have communal nesting but are not real sociable. They can get to be two or three feet long, which leads to them being confused with snakes. They weigh just less than a pound.

While they do have some similarities with snakes, they are not venomous and are not linked biologically. 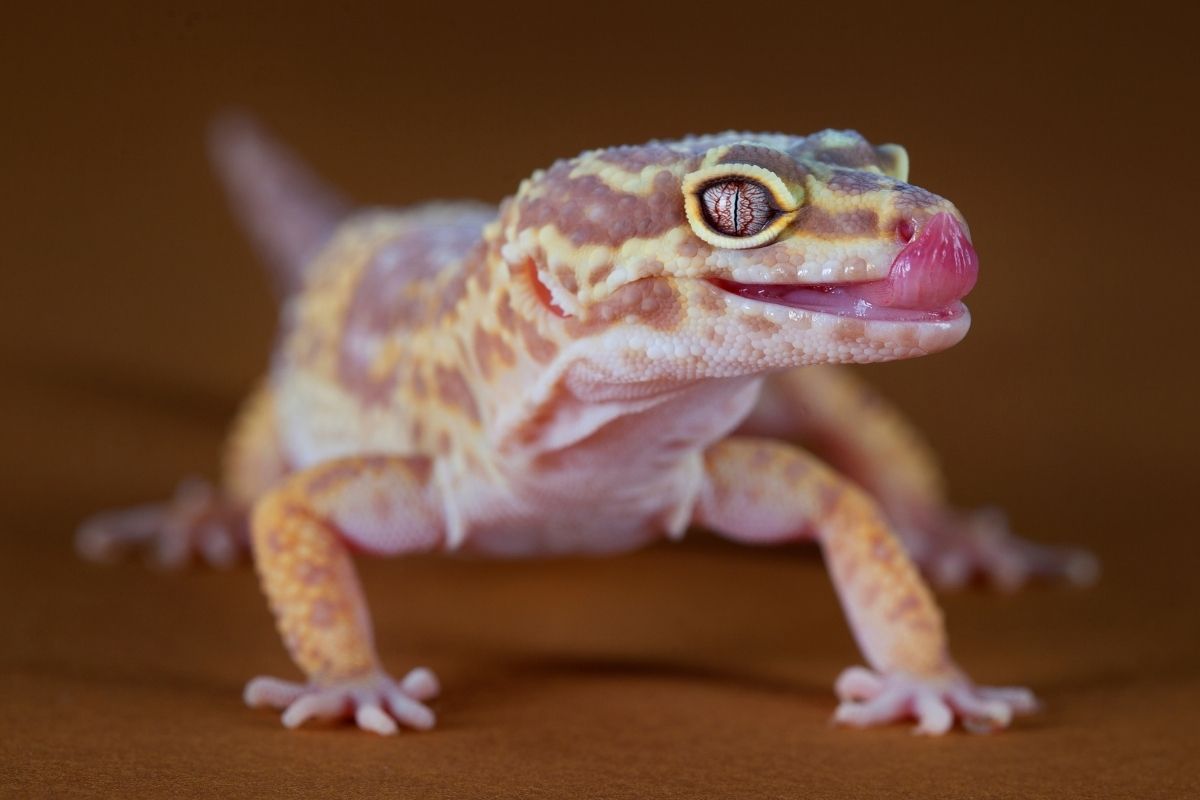 The family Sphaerodactylidae of geckos lives in Central and South America, as well as parts of northern Africa, the Middle East, and India. Most of them are brown with markings that help them blend into the desert areas where they live. A couple of them have more of an orange color.

These geckos are diurnal and are active in the daylight hours. They hunt for insects, spiders, and worms to eat. They will eat vegetation if they have no other choice.

They do not eat every day and are not really active. They are docile and easy to tame, which makes them good pets. Geckos in this family are smaller than many others.

There is the dwarf gecko that is light blue or green and lives in Africa and Madagascar. They are about two inches long and only a couple of ounces. Some are brightly colored and are endangered.

The brilliant South American gecko gets its name from bright colors. The males may have bright orange or yellow coloring. Females do not have brilliant colors.

The Brazilian gecko is in this family and is under three inches long. Many in this family have bright colors and people want them. This has made some endangered and their import and sale is now illegal, but still happens.