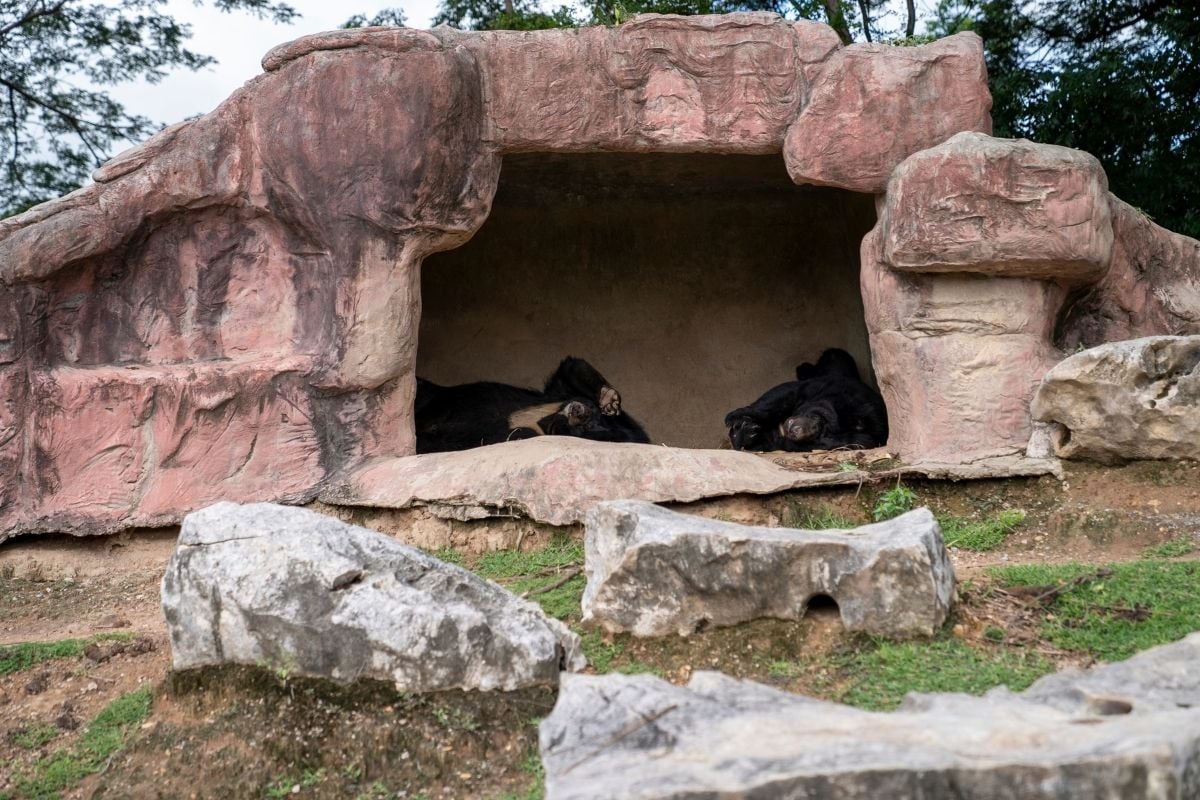 Bears do not usually live in the same den year after year. So, does that mean if you know where a bear has spent the winter, you are unlikely to see a shaggy black boar or a brown sow and her cubs emerging from the same cozy hole in winters to come? Not necessarily.

Contents show
Great Dens Are Repeat Retreats
How Do Bears Choose A Den?
Most Bear Dens Have Three Things In Common
“If It Ain’t Broke…” – Ursids Everywhere
The Ideal Winter Hideaway Starts In Summertime
Bear Lairs – From Nests To Caves To Trees
Is Denning The Same For Black, Brown & Polar Bears?
Temporary Shelters Vs. Maternity Dens 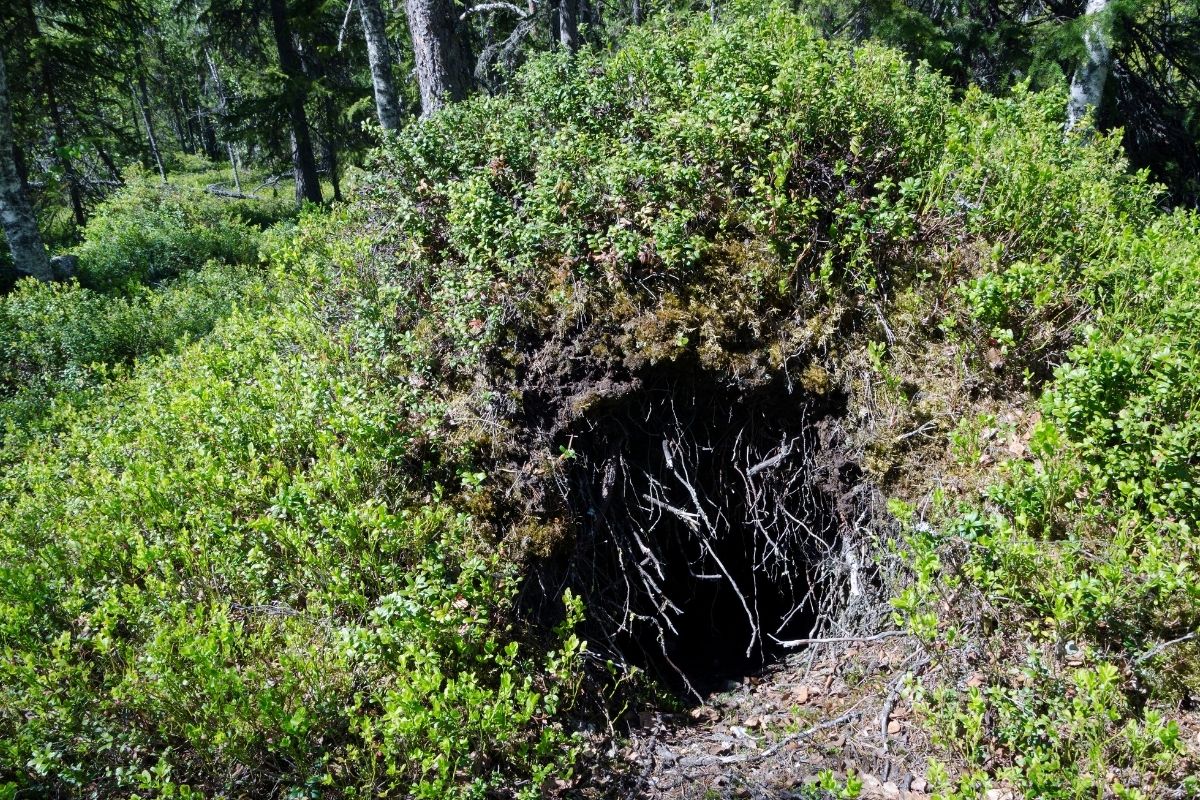 Can you imagine a lair used for thousands of years by so many generations of bears that the walls have been worn smooth by their passage? Dens can be used again and again, but not necessarily by the same bear. Fish and Game bear researcher LaVern Beier “followed one bear for 13 years, and he only used the same den two times, and it wasn’t two years in a row.”

The North American Bear Center echos this sentiment: “the den that researchers found being used the most during four decades of study was used three times, each time by a different bear, and each time after an interval of six years.”

How Do Bears Choose A Den?

Since bears have home ranges anywhere from 50 square miles (for females) and 300 square miles (for males), they have a lot of territories to choose from. You’re more likely to see your favorite bruin sticking to spots close to where they sheltered the year before.

Most Bear Dens Have Three Things In Common

“If It Ain’t Broke…” – Ursids Everywhere 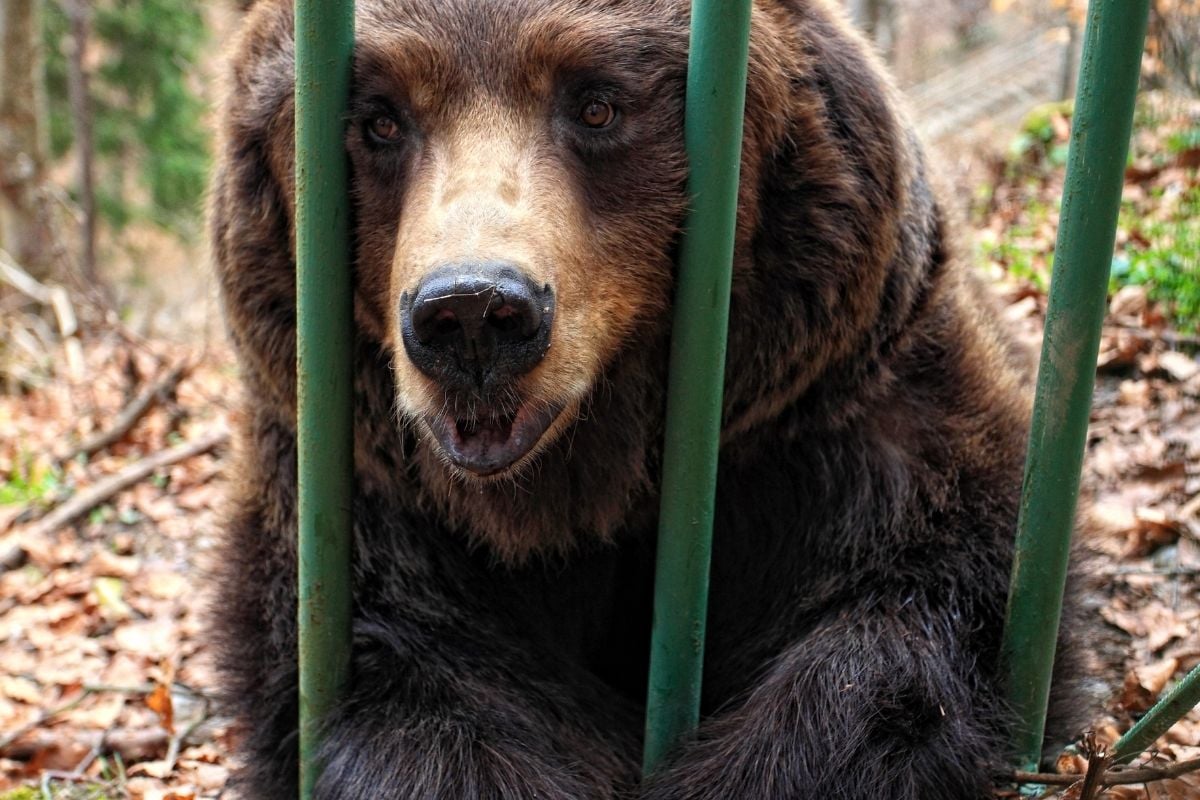 According to the National Forest Service, “Brown bears rely on past experience to choose den sites that maximize energy conservation.” In some environments, like the Arctic, it’s likely that last year’s hidey-hole has caved in by the time this year’s first cold snap hits. So, how far do these Kodiaks, Grizzlies, Cinnamons, or Kermodes actually travel from last winter’s digs? 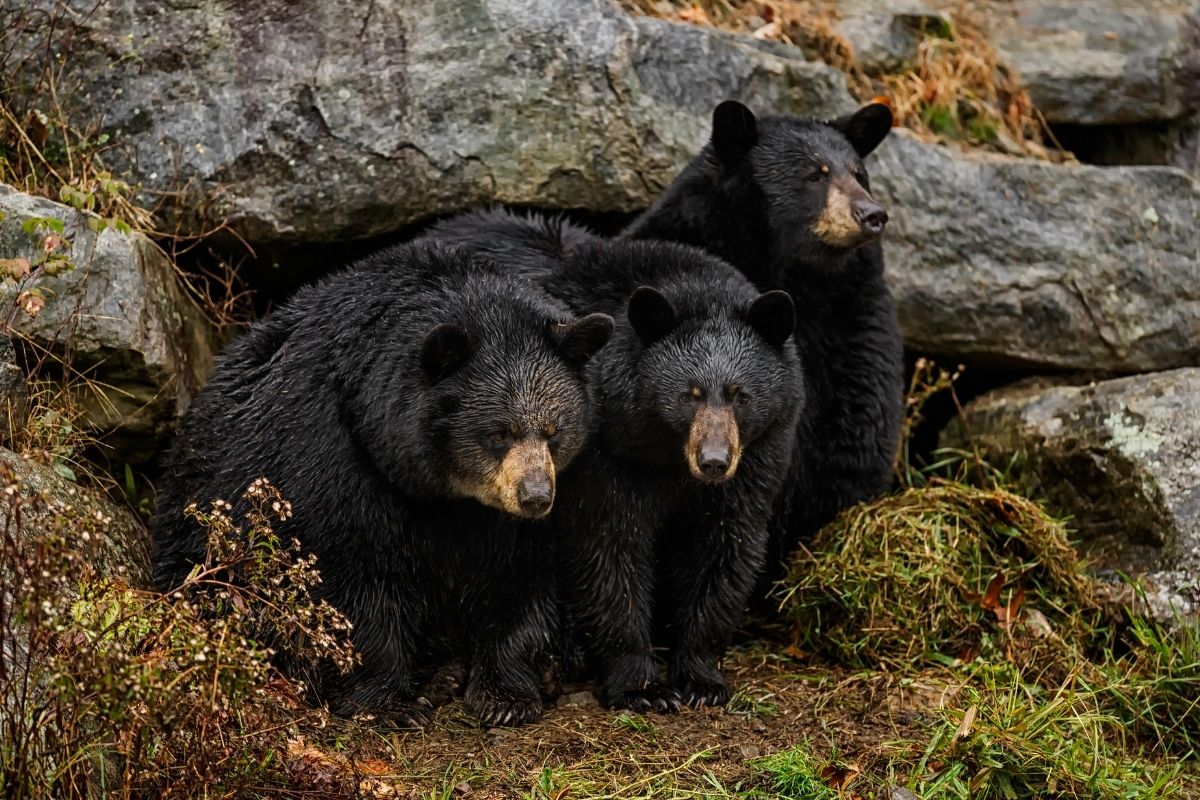 Preparing for their long winter’s rest is no last-minute job, especially for pregnant females. Bears will spend warmer months searching out a variety of potential sheltering sites. In 2004, researchers from the Wildlife Research Institute videotaped a 3-year-old female bear starting her digging in early July.

She came back to add some cozy bedding to her burrow in early fall.

Bear Lairs – From Nests To Caves To Trees 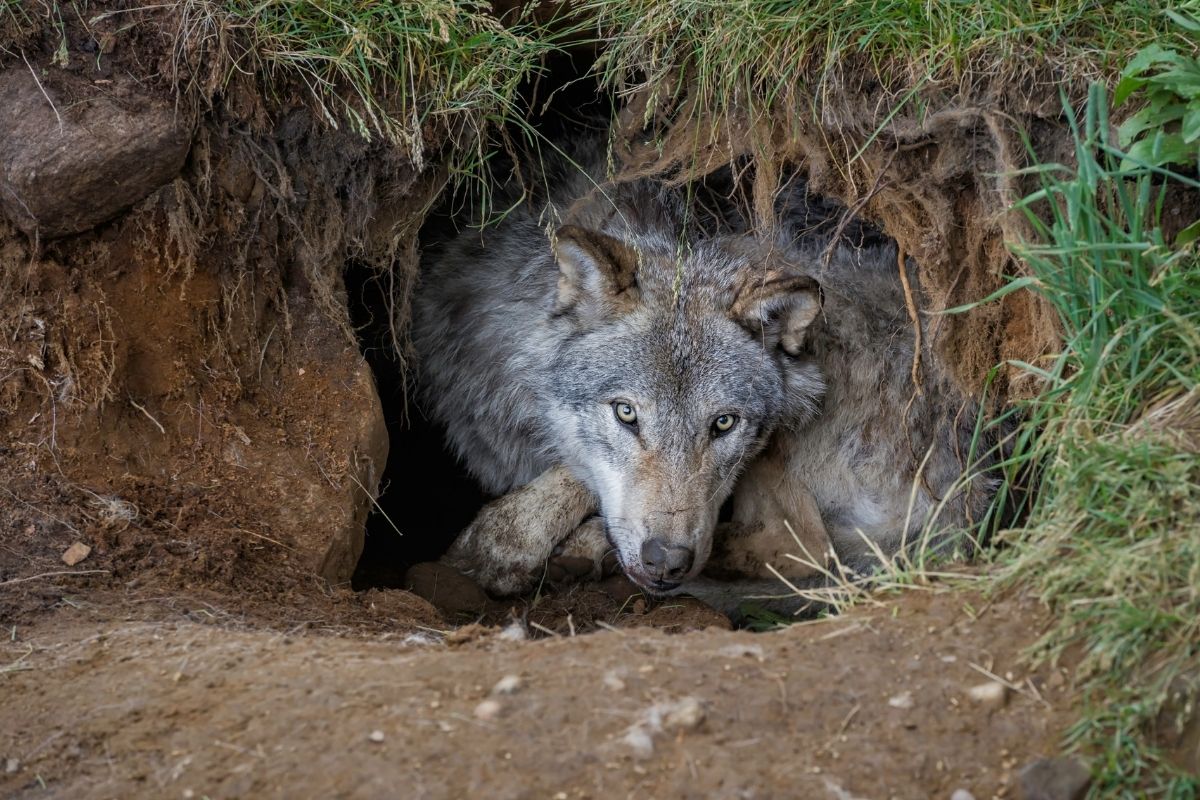 How and where a bear chooses its den “varies by the individual bear and by the individual year,” according to bear biologist Ben Kilham. Alaska state wildlife biologist Ryan Scott says it this way: “You can run into a bear den just about anywhere.” Dens have been found 800 feet up in a hollowed-out cottonwood tree, in huge piles of grass, and even in a depression on the forest floor near a good windbreak.

So, where is your favorite ursid likely to refuge when temperatures drop?

Is Denning The Same For Black, Brown & Polar Bears?

As you can probably imagine, a polar bear surrounded by ice and snow and a black bear hideout hunting in a summer forest are going to have different preferences and opportunities to build their dens. 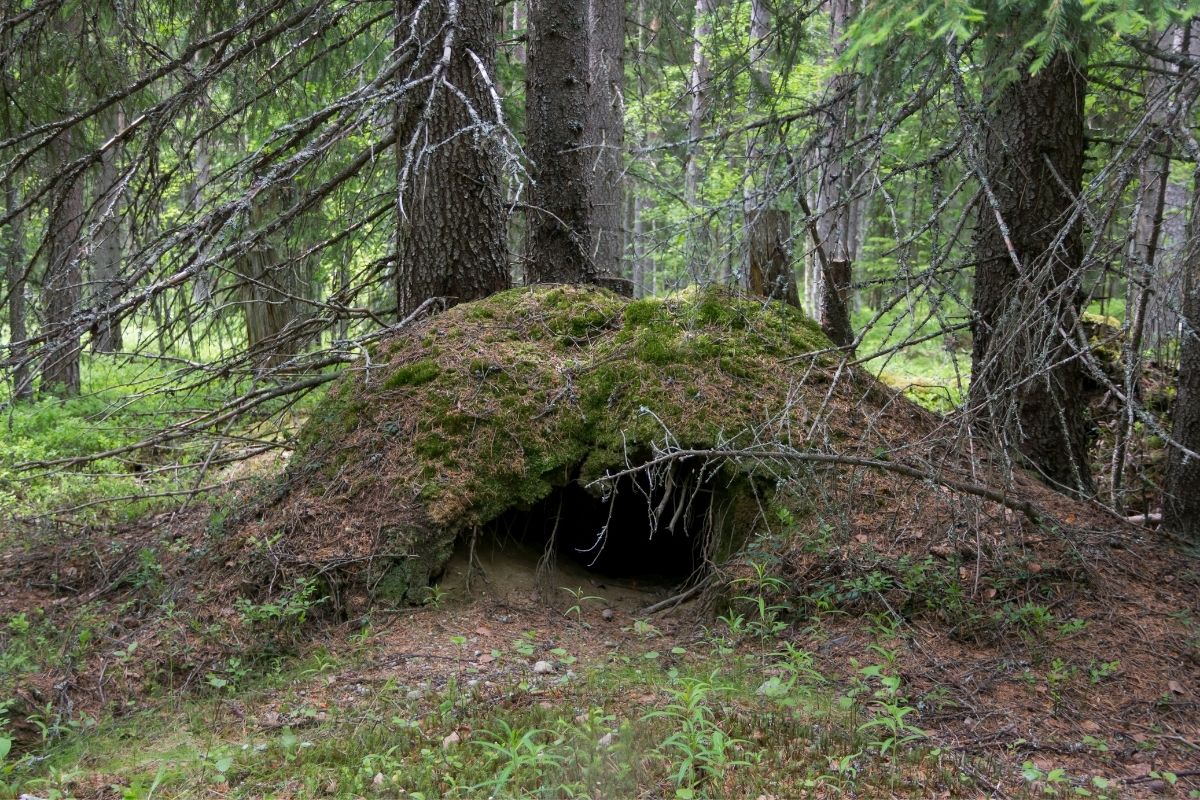 Most winter denning is temporary and based more on food scarcity than outside temperatures. Male polar bears and other species of male bears that don’t hibernate through the winter will sometimes take cover during extreme temperature drops or storms, but will quickly reemerge. With little ones on the way, pregnant females are more likely to take time to make sure there is a cozy bed of moss or other bedding in their hollow of choice.

They’re in it for the long haul. Polar bear mother’s maternity dens will have a main chamber with an air hole in the snow, an entrance tunnel, and a separate room for her cubs’.