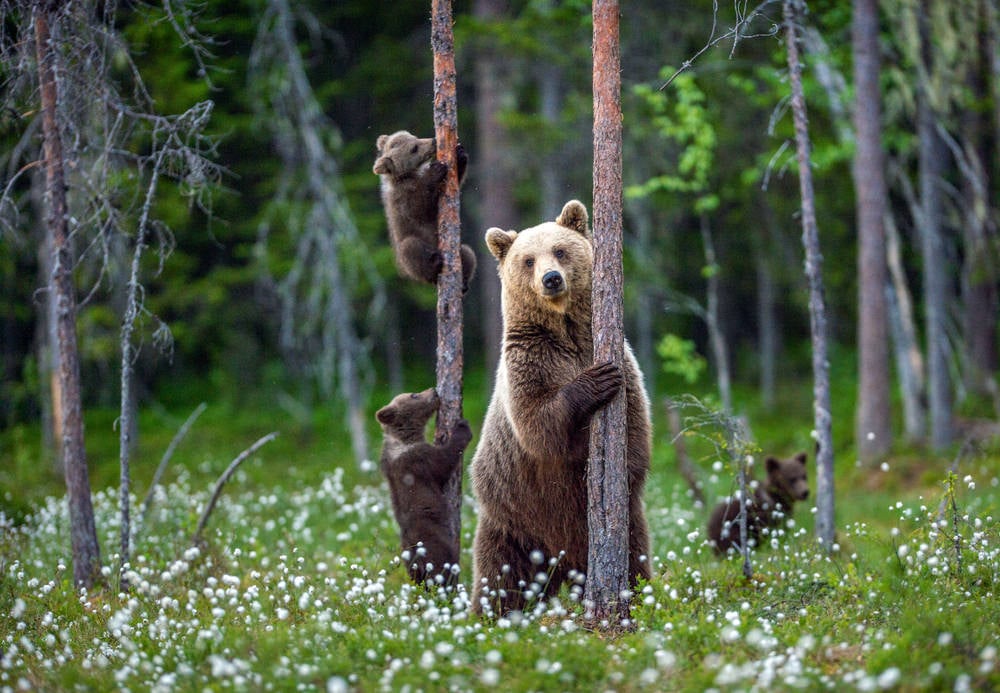 Bears are unique animals that are often spotted in urban areas. They can range in size from four feet long and sixty pounds to eight feet long and over 1000 pounds. They can be found throughout North and South America, Asia, and Europe.

Except for mothers with cubs, bears are normally alone. They have short tails, non-retractable claws, and a keen sense of smell. There are many subspecies of bears, even though there are only eight main species.

Bears can live a maximum of 25 years in the wild and 50 years in captivity on average. The IUCN Red List lists six species as threatened or vulnerable, including the polar bear and the giant panda. Here are a few different types of bears.

Polar bears spend a lot of their time on the sea ice of the Arctic Ocean, so much so that they are frequently regarded as marine mammals. However, if you consider them terrestrial animals, they would be the world’s largest land predators.

Polar bears have black skin beneath their clear guard hairs (which appears cream-colored or white to the naked eye), which can only be seen by gazing at their snout.

They are around eight feet long from nose to tail. Males are nearly twice as big as females. Male polar bears normally average over 1,700 pounds, while females weigh around 1,000 pounds.

Polar bears are protected from the cold by a water-repellent coat and a layer of fat. They hunt for ringed and bearded seals by diving and standing on ice floats. Their keen sense of smell helps them hunt more effectively. From a mile away, they can smell a seal coated in three feet of snow.

Brown bears gave way to polar bears millions of years ago. Polar bears, on the other hand, are now designated a threatened species. This is owing to the ongoing habitat loss brought on by climate change. 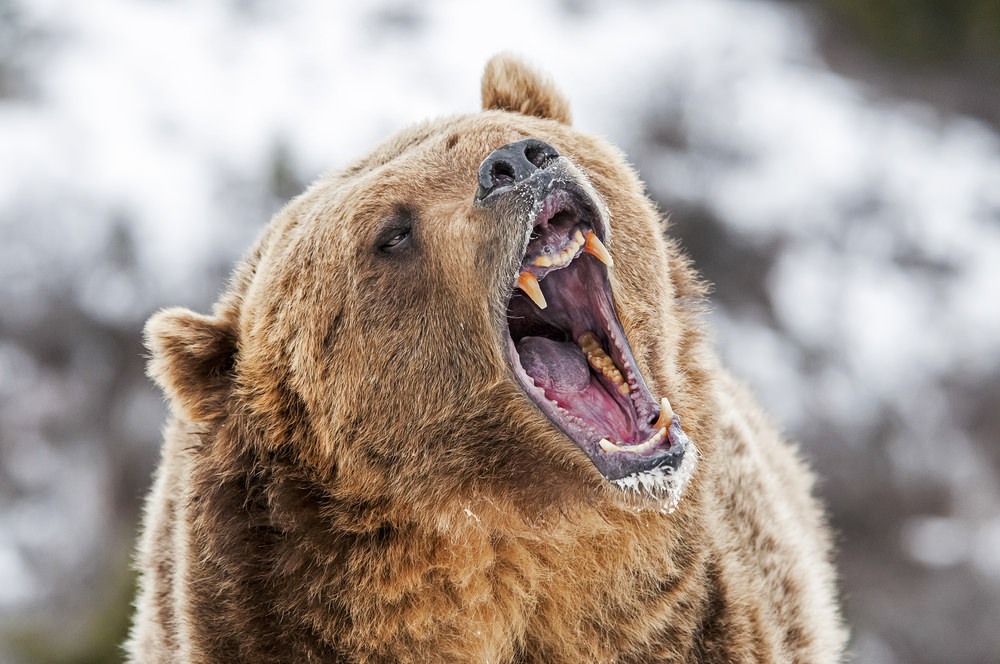 The grizzly bear is a brown bear subspecies found in North America. Grizzlies are brown in color, but their fur can appear white-tipped or grizzled, which gives them their name. Grizzly bears are legally protected in the continental United States, but not in Alaska, despite several controversial attempts to repeal those protections in the past few years.

They can weigh up to 800 pounds and, with the exception of females and their offspring, are solitary animals. Grizzly bears are top-of-the-food-chain predators with enormous power. Nuts, fruit, leaves, berries, and roots make up a large part of their diet.

Bears eat a variety of animals, including rodents and moose. Grizzlies have been seen running at speeds of up to 30 miles per hour, despite their enormous size. These creatures require a large amount of space, with a home range of up to 600 square miles. The number of grizzly bears has expanded under the protection of the US Endangered Species Act since 1975 when they were designated as endangered. 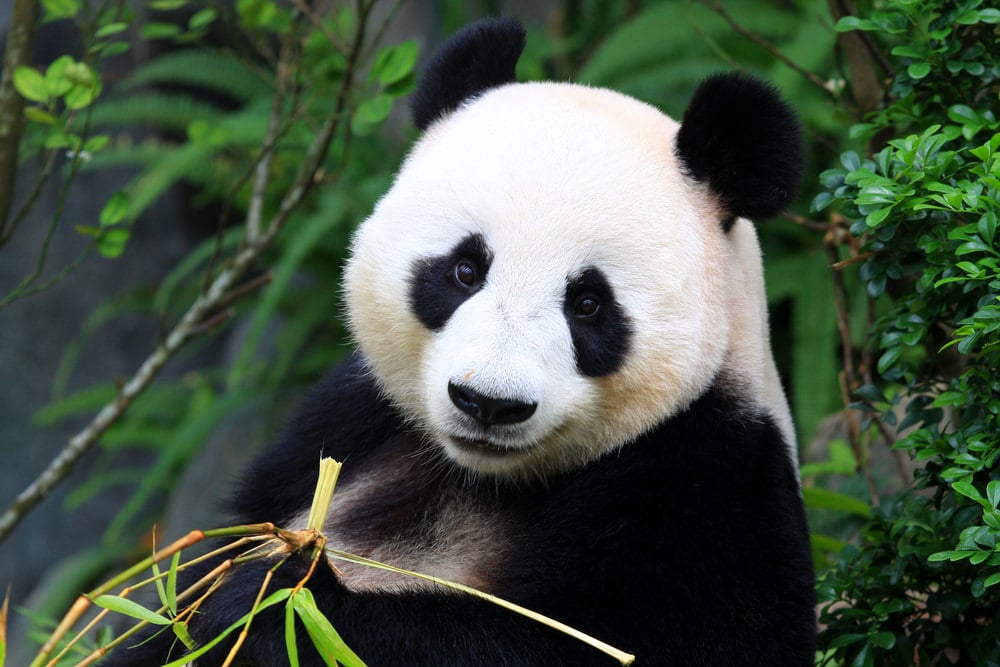 The giant panda is one of the most recognizable bears on the planet, as well as one of the most endangered, which has made it a symbol of the conservation movement. It’s also one of the most difficult animals to save because of its bizarre diet and lack of interest in reproducing.

Despite having a digestive system adapted for an omnivore’s diet, the panda eats virtually solely bamboo. Because bamboo is a grass with very little nutritional value, protein, or calories, the panda is continuously fatigued. To keep its massive bulk, it has to consume a lot of bamboo, which means it defecates roughly 40 times a day. Because it gets so little energy from its nutrition, its entire life revolves around doing as little as possible.

It steers clear of hills. It avoids having to interact with other people. It sits down as often as possible and sleeps as much as it can. That means it has a very low birthrate–after all, who wants to seduce a partner when all they eat is grass? Pandas in captivity, in particular, appear to have lost all interest in mating. The panda, on the other hand, is an immensely intriguing creature! It behaves so differently from other bears that it was mistaken for a raccoon for years, despite DNA testing confirming that it is a “genuine bear.”

The panda’s status as a bear has been a source of ongoing discussion; today, the general opinion is that it is a particularly primitive but true bear. It isn’t connected to any other bear species, and it isn’t linked at all to the red panda, which isn’t a bear. It has a projecting bone known as a “pseudo-thumb” that allows it to hold bamboo, something no other bear can achieve. It is critically endangered, with only 2,000 animals left in the wild. 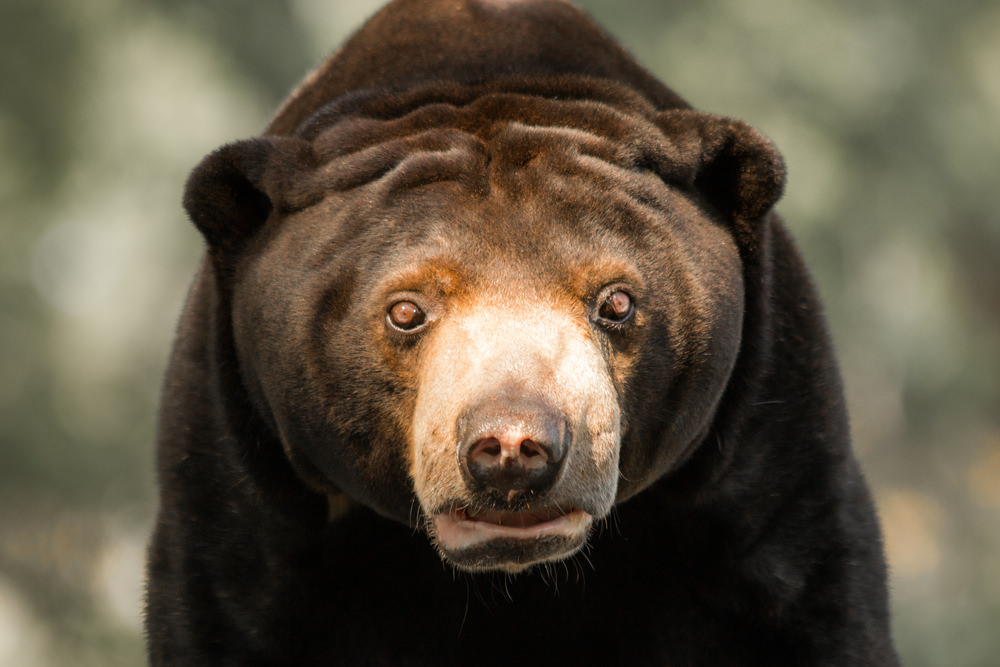 Sun bears are sometimes known as honey bears because of their fondness for honey. This old species hasn’t altered much throughout the years; thus, little is known about it. Sun bears live in the lush lowland woods of Southeast Asia, where they are secluded.

The term ‘Sun bear’ derives from the characteristic white or golden patch on their chest, which is a symbol of a rising sun in folklore.

Sun bears gave birth to American and Asian black bears. They are, however, sun bears, which are significantly smaller than the American black bear.

Sun bears are known for their flexible snouts and lengthy tongues, which have evolved from termite extraction. They have the largest canines, which are designed for shredding meat, of all the bear breeds. They also have claws that are unusually lengthy.

We don’t know anything about how they act in the wild. They are nocturnal, meaning they eat berries, roots, fruits, and small animals while navigating through the forest at night. They’re also recognized for their remarkable climbing abilities.

It’s difficult to find information on sun bears. Due to deforestation, their habitats are deteriorating; poachers hunt them for their body parts and fur; farmers exterminate them because they frequently ruin food crops, and females are slain so that their young can be turned into pets. 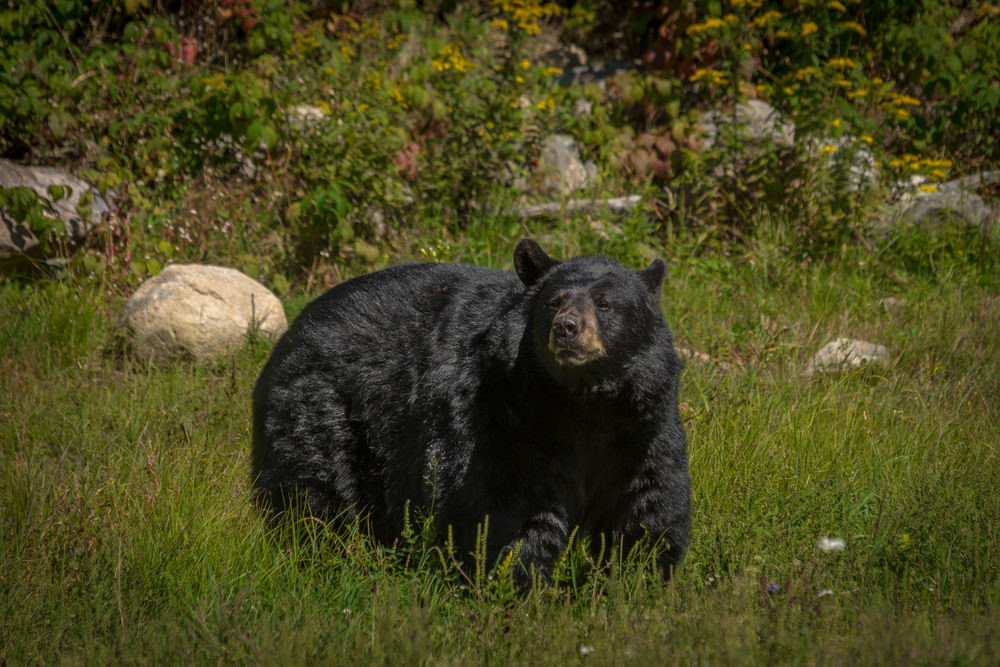 It is the most common bear in North America, with populations stretching from Florida to Canada and Alaska. The black bear’s black and brown color phases are prevalent.

In northwestern British Columbia, Canada, the white color phase is rarer. The black bear eats everything. Vegetables make up the majority of their diet. Males reach full size around the age of eight. Females in boreal forest zones mate and have cubs at the age of 5 to 7 years, and at the age of 8 years and older (Ontario).

Males can weigh up to 280kg (600 pounds), and in some cases, much more. In the wild, black bears can live up to 25 years. Although older bears have been observed, due to human activity, the bulk of bears never reach old age (hunting). 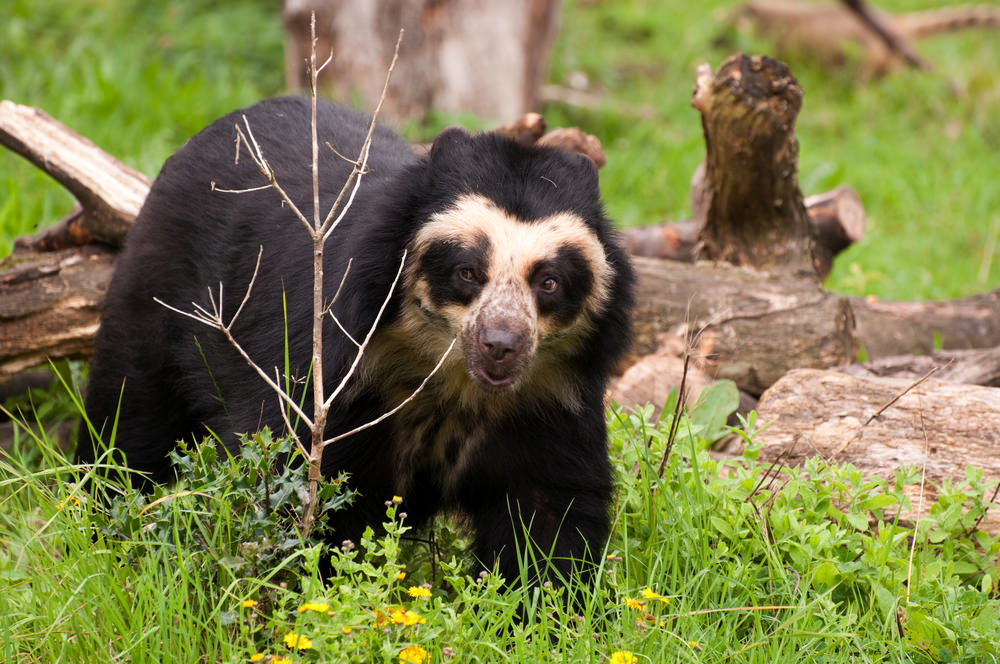 Okay, so the spectacled bear is a delightfully strange creature, perhaps even more so than the giant panda. It’s the only bear native to South America, as well as the world’s only short-faced bear. Short-faced bears, also known as tremarctine bears or running bears, were the most prevalent type of bear in the Americas and Europe until roughly 15,000 years ago.

They were the territory’s apex predators, and they may have been “kleptoparasites,” essentially frightening other huge predators like wolves and saber-toothed tigers. The cave bear and Florida short-faced bear were the largest carnivores on the globe at the time, and all of the short-faced bears were massive. And they’re all dead now except for the bear with the spectacles.

The spectacled bear is a medium-sized bear that is technically South America’s largest carnivore; however, it prefers to eat plants and fruits. It’s also arboreal, like most other bears, and runs up into the treetops to escape humans and potential predators (jaguars may try to drag down a spectacled bear).

It has a considerably different skull form than other bears, as you might expect from a short-faced bear with a nose that is shorter and rounder than any other surviving bear. The bear’s name stems from its unusual face coloring, which makes it appear as though the bear is wearing glasses occasionally (but not always). It’s unlike anything else on the earth. 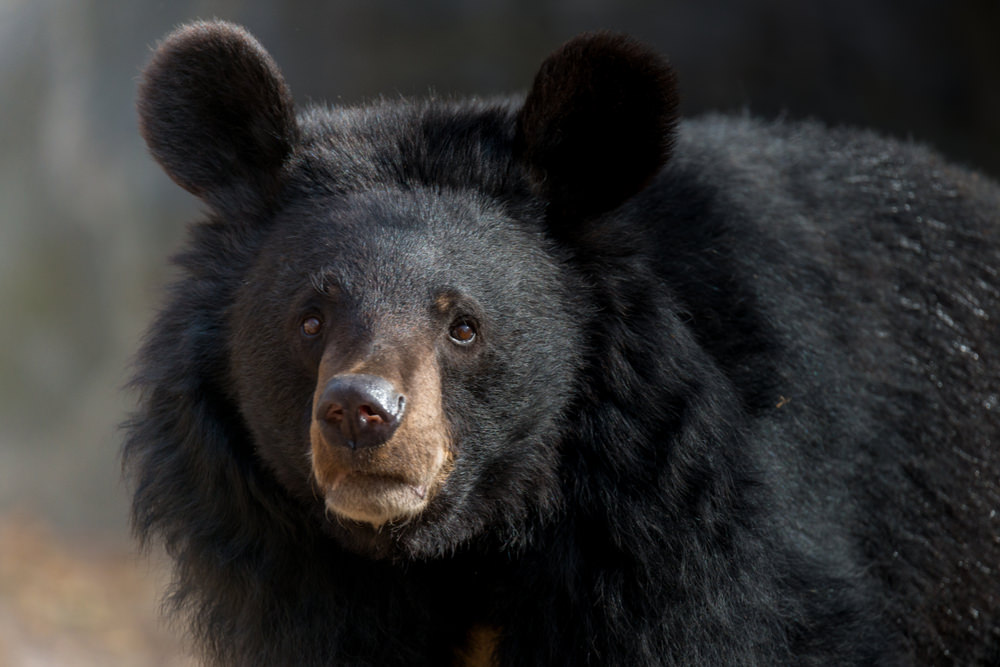 The second-worst animal is the Asian black bear, sometimes known as the moon bear (a nice name, really) or the white-chested bear. We’re not sure if we agree with Rudyard Kipling’s description of it as “the weirdest of the ursine species,” but it’s certainly one of the most unpredictable and deadly bears in the world. Despite being closely related to the relatively gentle American black bear and being only a medium-sized bear at most, this is true.

The Asian black bear can be found in Asia and Eastern Europe, as well as Japan (where it is known as tsukinowaguma, which means “crescent bear”). It lives beside tigers and is occasionally preyed upon by them.

Because most bears are apex predators or have no natural predators, this pressure is thought to make them more aggressive. In fact, it is more violent toward humans than either American black bears or Eurasian brown bears, especially when aroused. This is ridiculous! However, the Asian black bear is also a victim of the heinous bear bile trade, in which a bear is held alive and injected with a massive and excruciatingly painful syringe to extract bile from its gall bladder.

Some Eastern treatments contain bear bile. So, you know, it could be okay if it attacks humans now and then. But! The nicest part about ranking bears by quality is that they’re all really awesome. The Asian black bear is the most bipedal of all bear species, capable of walking for up to a quarter-mile on its hind legs.

Brown bears can be found throughout Asia, Europe, and northern North America’s highlands and woods. They are solitary and omnivorous, but when food is plentiful, they cluster.

Brown bears, for example, congregate at Alaskan fishing areas throughout the summer when salmon migrate upstream to breed. Brown bears eat a lot of food in the fall, up to 90 pounds per day, before going into hibernation in the spring.

Brown bears, although being apex predators, eat a lot of roots, fruit, berries, leaves, and nuts. Brown bears are exceptionally swift, despite their size. They have a top speed of 30 mph.

Brown bear size, on the other hand, varies based on geographic region and food availability. Brown bears are larger than polar bears and can be found in Russia and Alaska’s coastal areas. Brown bears that live in North America’s and Europe’s interiors are usually significantly smaller. 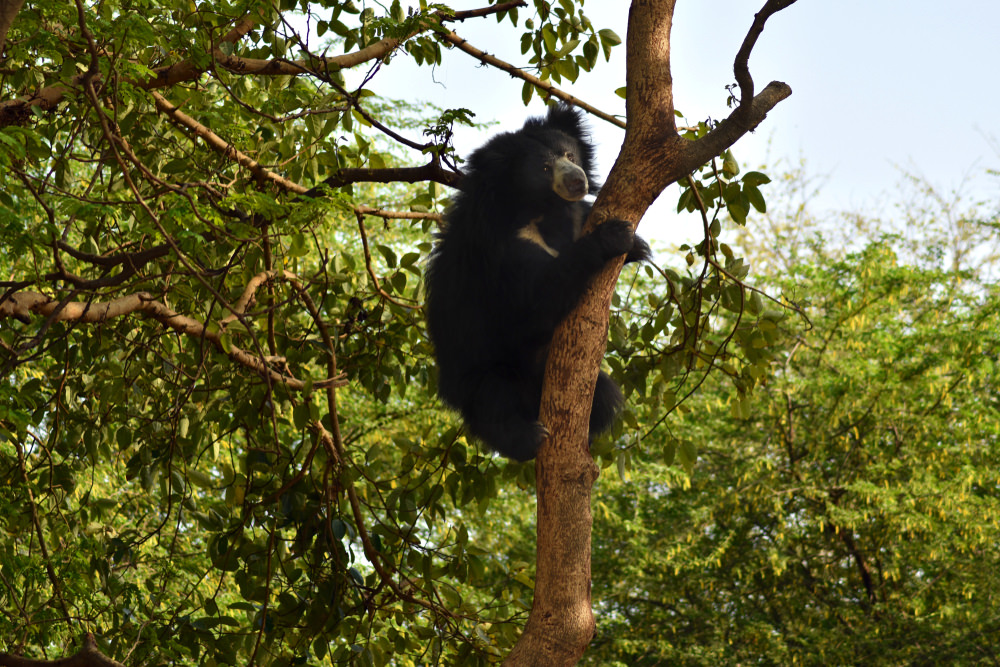 Sloth bears acquire their name from the fact that they have a sloth-like appearance. They have strong, curved claws, dusty-black and shaggy coats, and short-haired, pale muzzles, just like sloths.

The two top front teeth are missing in adult slots. They also have smaller molars and premolars than other bears due to their diet of berries and insects. They do, however, have enormous canines that they utilize to defend themselves.

Adult sloth bears have strong hook-like claws that allow them to dig for termites and climb trees, and their feet are pointed inwards for maximum digging efficiency.

Sloth bears do not hibernate during the winter since they have food all year. They’re also smaller than other bears since they don’t have to worry about food shortages.

These bears live in India’s vast grasslands, both dry and wet. Sri Lanka and southern Nepal. Sloth bears are trained to be “dancing bears” in India, and the British military kept them as pets because they are lovely shaggy creatures.

Sloth bears, on the other hand, can be extremely hostile when they are in the jungle, and they can brutalize humans without provocation. Due to poaching for parts and habitat destruction, the population of slot bears is expected to have decreased by nearly half in the previous 30 years.