The ability to “see,” in light or darkness is difficult to truly define. For example, fans of Marvel may be familiar with the superhero Daredevil, who lost his sight at a young age and is, effectively, blind; however, even he has difficulty answering the question of whether or not he can see because he is able to use his other senses to get a very accurate picture of his surroundings. It is the same with some animals.

Animals that can’t see well oftentimes do just fine because of other adaptations like whiskers, echolocation, and hearing. For the purposes of this list, I will include animals that have poor eyesight at night, even if they can see well by other means. Overall, night vision is hard to measure.

Unless an animal is completely blind, it can see in the dark to some extent. How well an animal can see at night depends on the number of rod cells in its eyes. Oftentimes, animals with bigger eyes have better night vision. You’ll notice the lack of this feature holds true for the following animals. 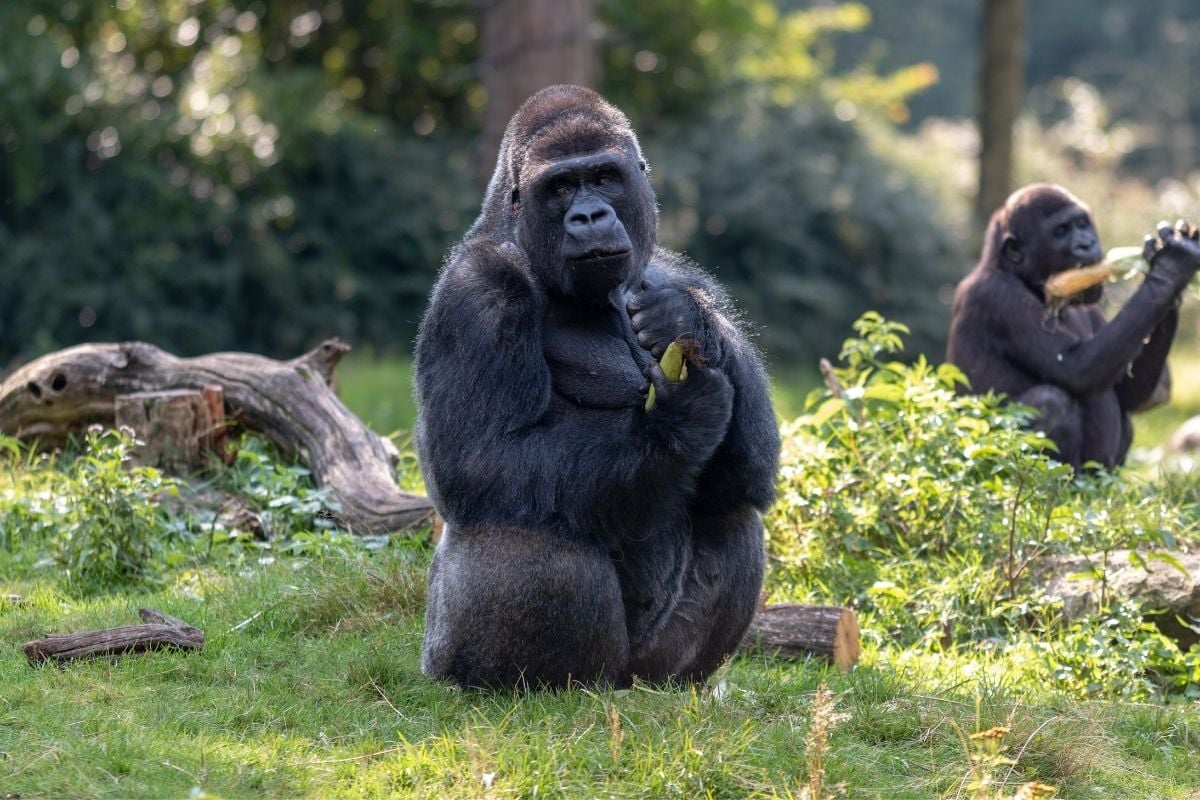 Most of our world’s gorillas live in Equatorial Africa, an area of dense vegetation and humidity. Earth’s only two species are separated by over 500 miles of forest in the Congo Basin. Both species are vegetarian, diurnal mammals.

During the day, gorillas have pretty good vision, similar to a human’s. Front-facing eyes, limited color vision, and a light-sensitive area of the eye called the fovea allow gorillas to see a wide field of view, understand depth, and see detail clearly. Their ability to distinguish between colors is likely a result of their vegetarian diet, as color distinction may be an important survival tactic for the differentiation of poisonous and non-poisonous fruit and plants, and helps foragers find food among like-textured backgrounds.

Gorillas also don’t do a lot of moving around after dark. Like humans, they try to be in bed when it gets dark, but they will sleep for around 12 hours, effectively missing the non-daylight hours entirely. Also similar to humans, when it gets dark, they cannot distinguish between colors as our cones, responsible for color-detection, don’t function in low light. Rods, the other facet of our vision, can provide some limited visuals at night. 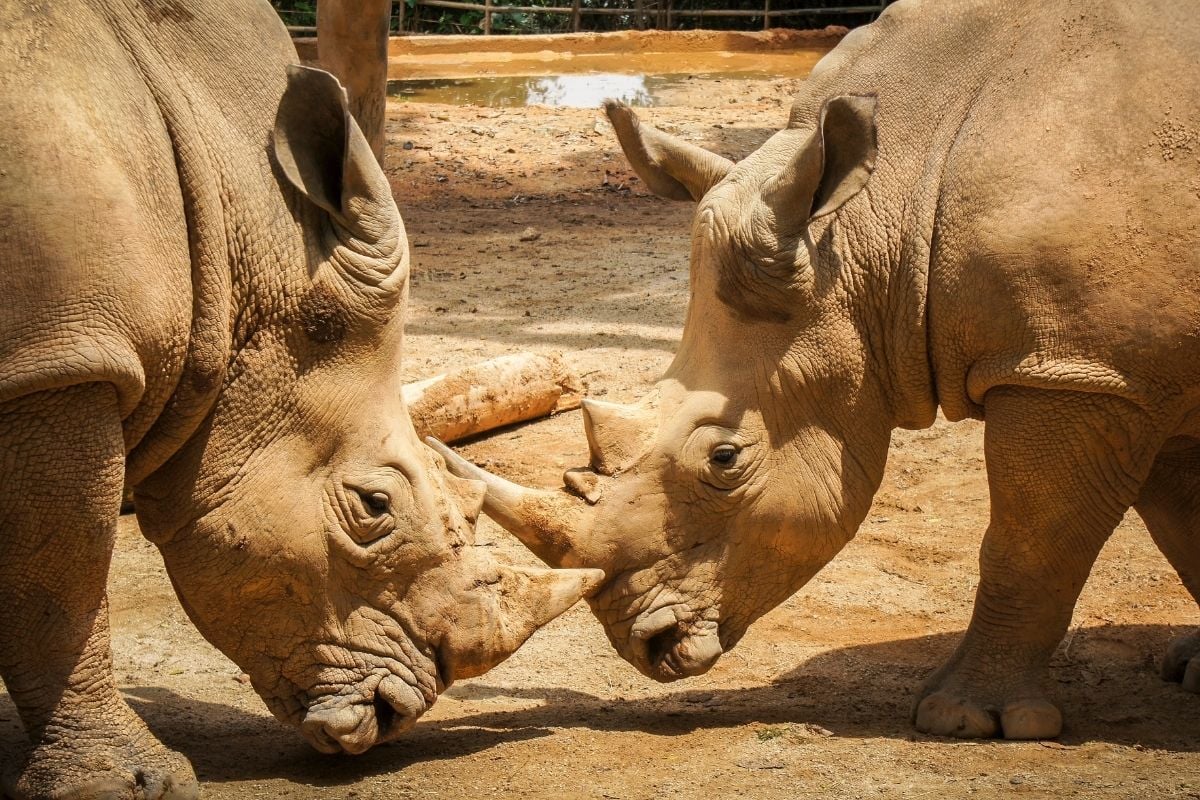 While limited, these five species actually differ greatly in their environments and routines. The most critically endangered rhino, the Black Rhino is adapted to living in the desert. Still, the black rhino eats a vegetarian diet of leafy plants, branches, shoots, thorny wood bushes, and fruit.

Asian rhinos live in tropical and subtropical climates, giving them greater access to vegetation. They eat a diet of tall grass, shrubs, leaves, and fruits. As rhinos are diurnal vegetarian foragers, you can probably guess their vision is about as good as the gorilla’s, except their poor day vision may limit them even further at night.

In full daylight, rhinos apparently cannot see a person who is standing still at 30 meters. Another interesting distinction between species of rhino is that some of them are more nocturnal, some are more diurnal, while in general rhinos split their time and are considered both. Nocturnal animals typically have better night vision than diurnal animals, which might lead some to believe that the more nocturnal white rhino sees better at night than the primarily diurnal black rhino.

It is thought that some species who are hunted by humans, specifically the elephant and the rhino, have adapted to be more nocturnal over time. Overall, rhinos are particularly stunted in their vision. The fact that their eyes are on the side of their heads means that they don’t have a good range of vision, and they also can’t see in color.

This is atypically for a forager; however, it is said that their smell may more than make up for their visual deficits. 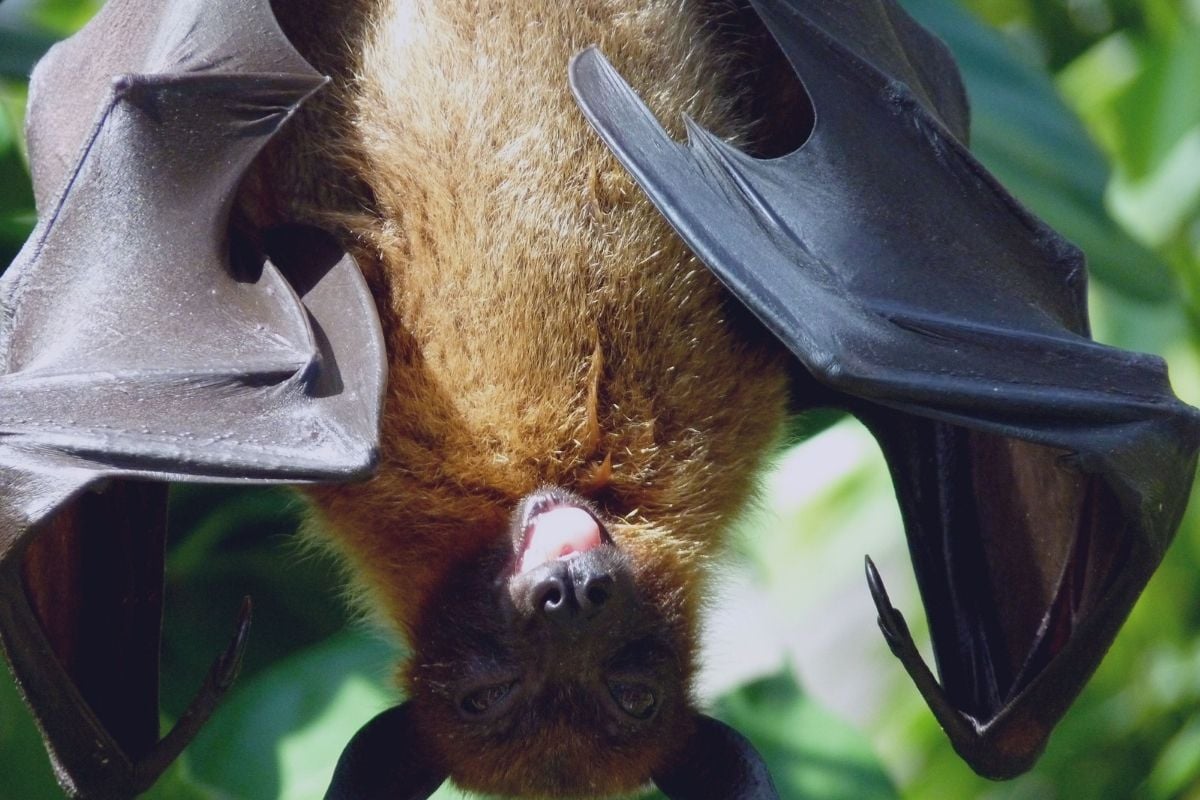 During the day, bats have eyesight that may be equal to or better than the eyesight of a human; however, at night, bats rely on echolocation to supplement their vision. Bats are varied at over 1,300 species living on almost every continent, yet their diet and habits remain relatively consistent. While there is some variation, bats either eat insects or fruit or both and most species are nocturnal.

This might lead some to assume that as night-time predators, they have good night vision. The answer is…kind of. The flying flox bat has color vision to find fruit in trees and can see quite well during the day, but on nights without a moon, they can’t even fly.

Megabats have large eyes and use them effectively at dawn and dusk in low-light conditions. However, smaller species of bats do not have great visual acuity and rely more heavily on echolocation. However, according to some studies, echolocation may be up to twice as effective as vision.

Bats may not be blind as they were previously thought to be, but scientists have surmised that their night vision isn’t as efficient as their day vision largely because they rely more heavily on echolocation at night. In short, we still aren’t certain how much of their vision bats use at night, but as nocturnal predators, their vision isn’t quite up to snuff compared to others of their kind.