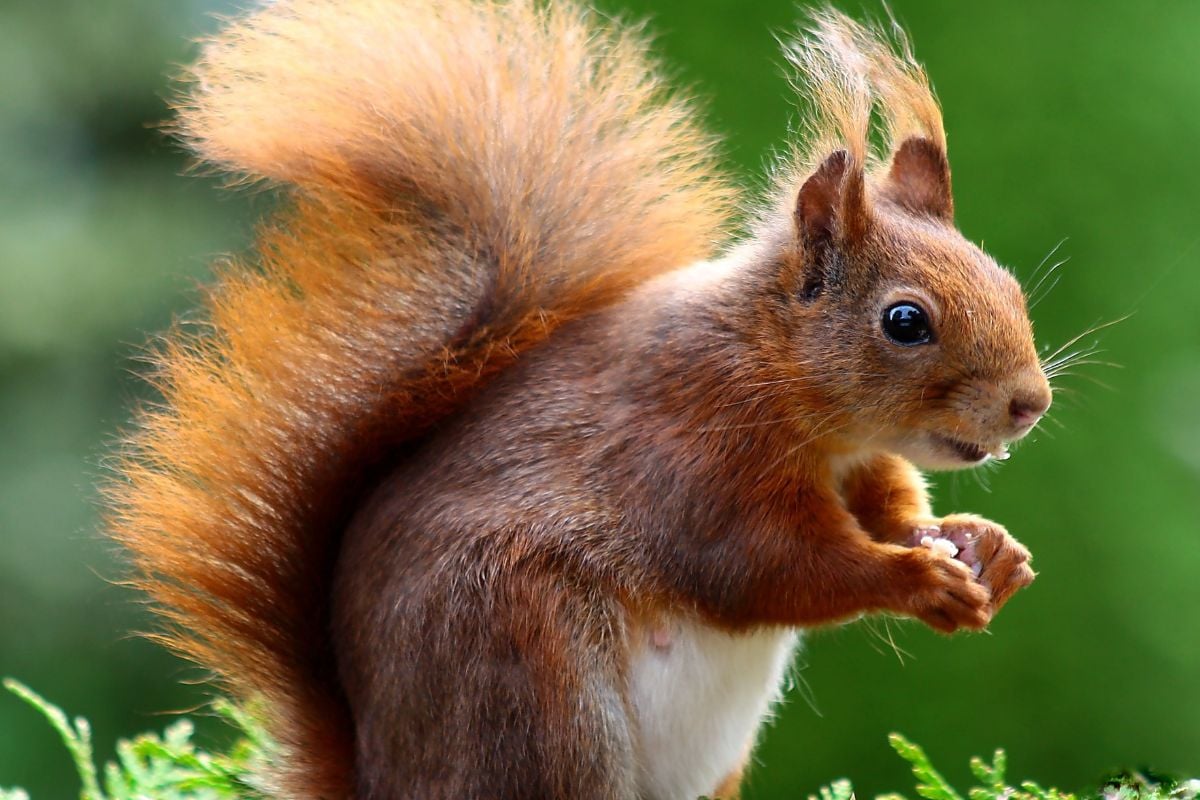 Any time you hear leaves moving in the trees above, you may find a squirrel or two foraging for nuts, chasing another squirrel, or just enjoying a quick run from branch to branch. These small mammals make themselves at home in trees deep in the forest and also in urban areas. They build dens within the trees and store nuts so that they can survive through the winter months.

If you enjoy squirrels, then you will enjoy other animals that are similar to them, whether it is in diet, size, habitat, or how they interact socially. 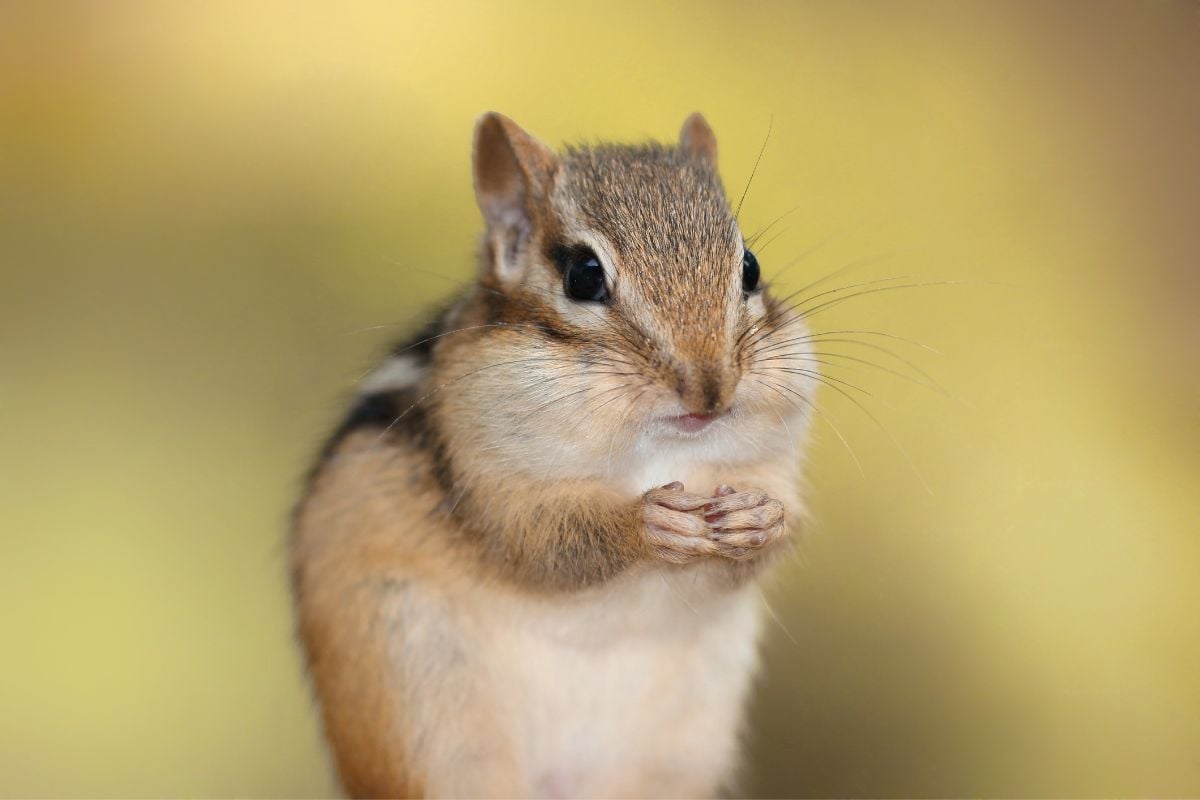 The chipmunk looks very similar to the squirrel and sometimes can be mistaken for it. Unlike squirrels, chipmunks have their distinct stripes and smaller size, which make them different from a squirrel. They are similar in that they both live in trees, and hide and harvest the nuts that they have foraged over the warm season.

A chipmunk’s diet is a bit more extensive than a squirrel’s, adding berries and small insects to the list when a squirrel is strictly seeds and nuts. 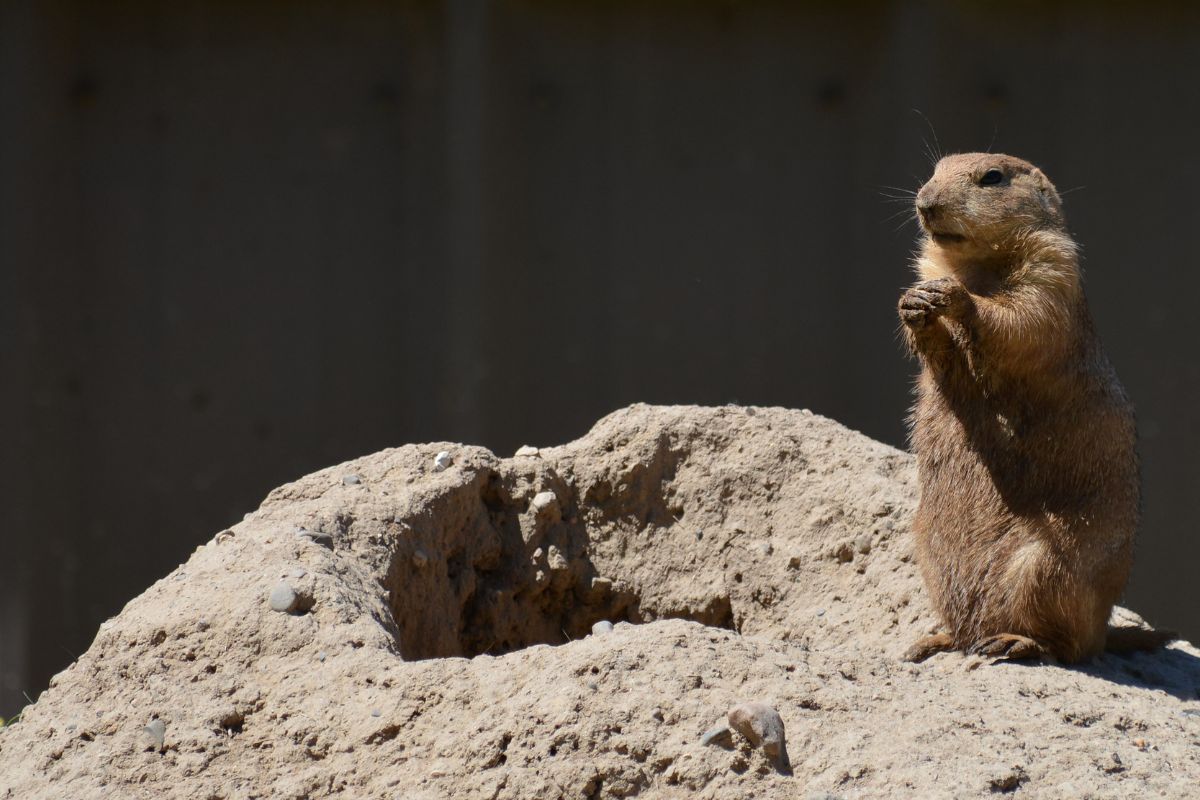 Found burrowed in the ground instead of a tree is the prairie dog. It is one of the most similar animals to the squirrel, except it lives on the ground and can double the size of an average squirrel. Like the squirrel, these prairie dogs are found primarily in North America, especially out west in open fields.

They have a similar life span to a squirrel of up to 5 years in the same area and can also span hundreds of acres for food. Prairie dogs are much more social than squirrels, as they live in massive towns together where they bring all of their food back. 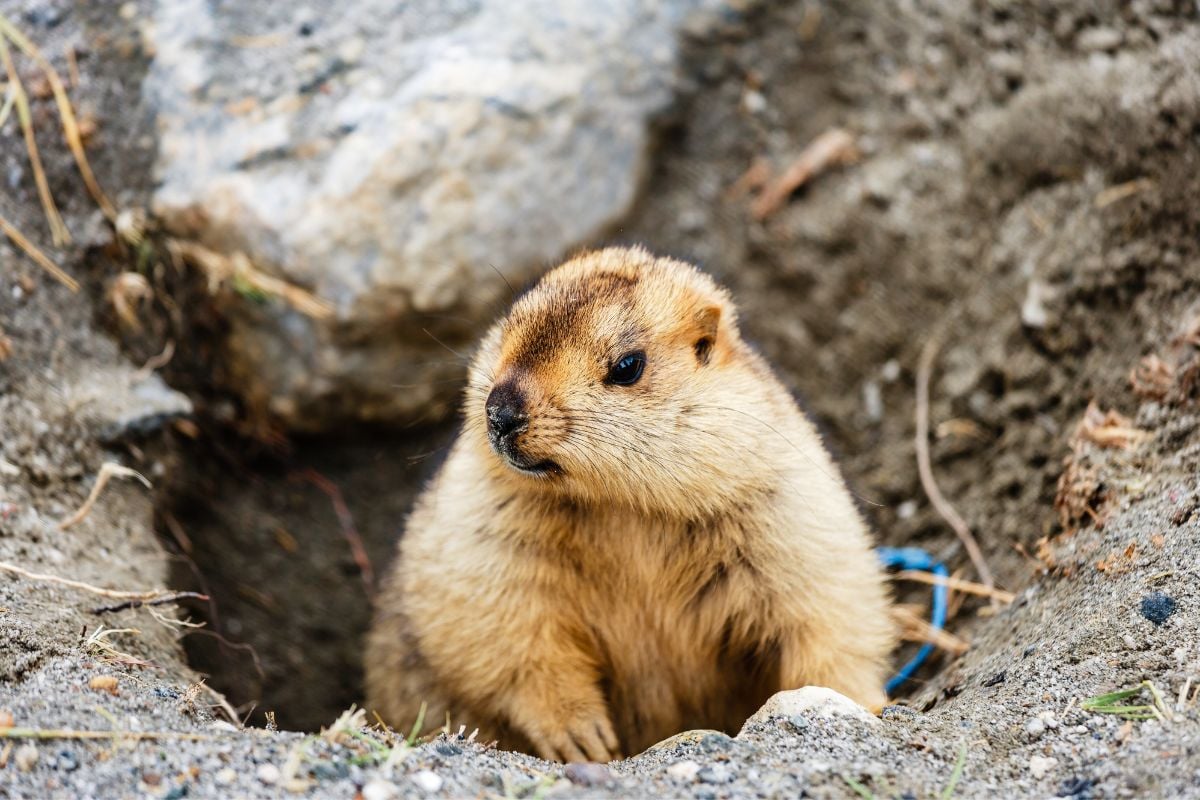 The difference between the two, however, is their size. The squirrel is much smaller than the marmot, making it easier to jump from tree to tree. 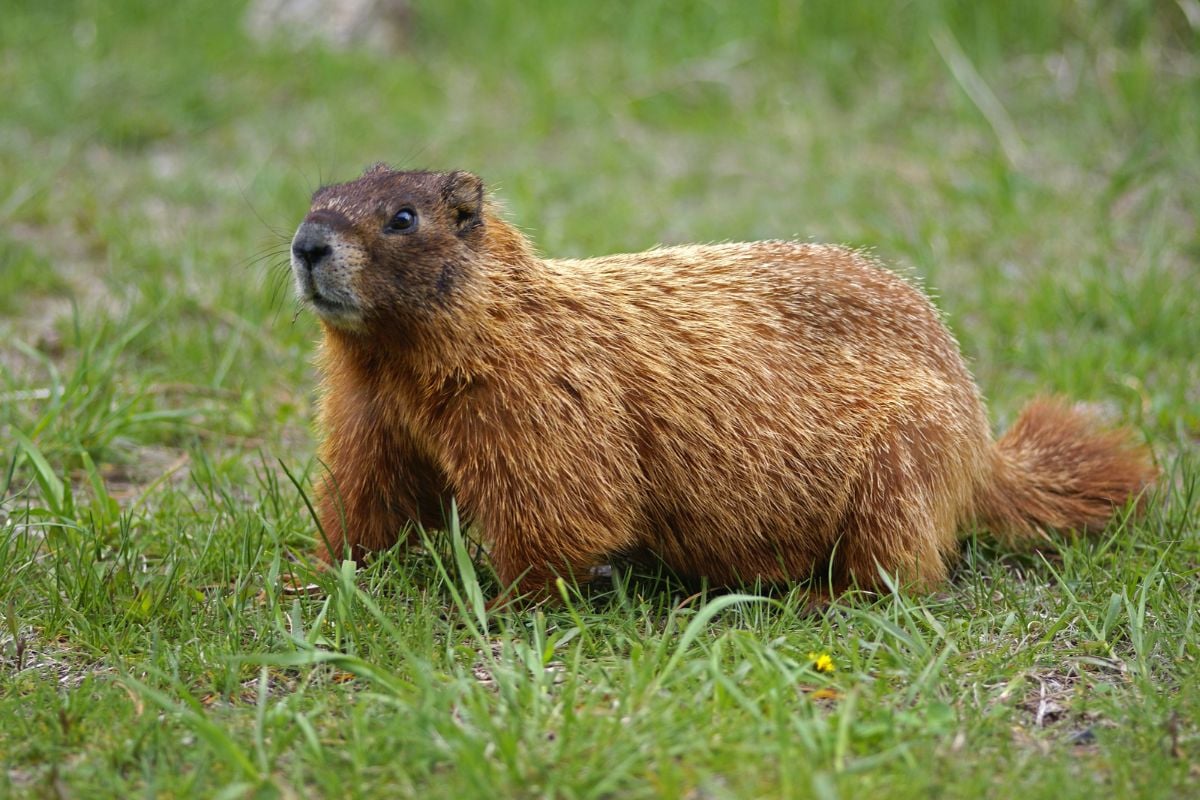 These furry creatures do more than check their shadow once a year. The groundhog is another animal that is similar to a squirrel. Both are classified as rodents, and they are herbivores.

Both the groundhog and the squirrel can be found across North America, existing in the same ecosystems all too often. They are the same family, but the groundhog is like other similar animals, living on the ground. They do create a burrow in the ground that is hidden so that they can pack away the food they need to store for the winter. 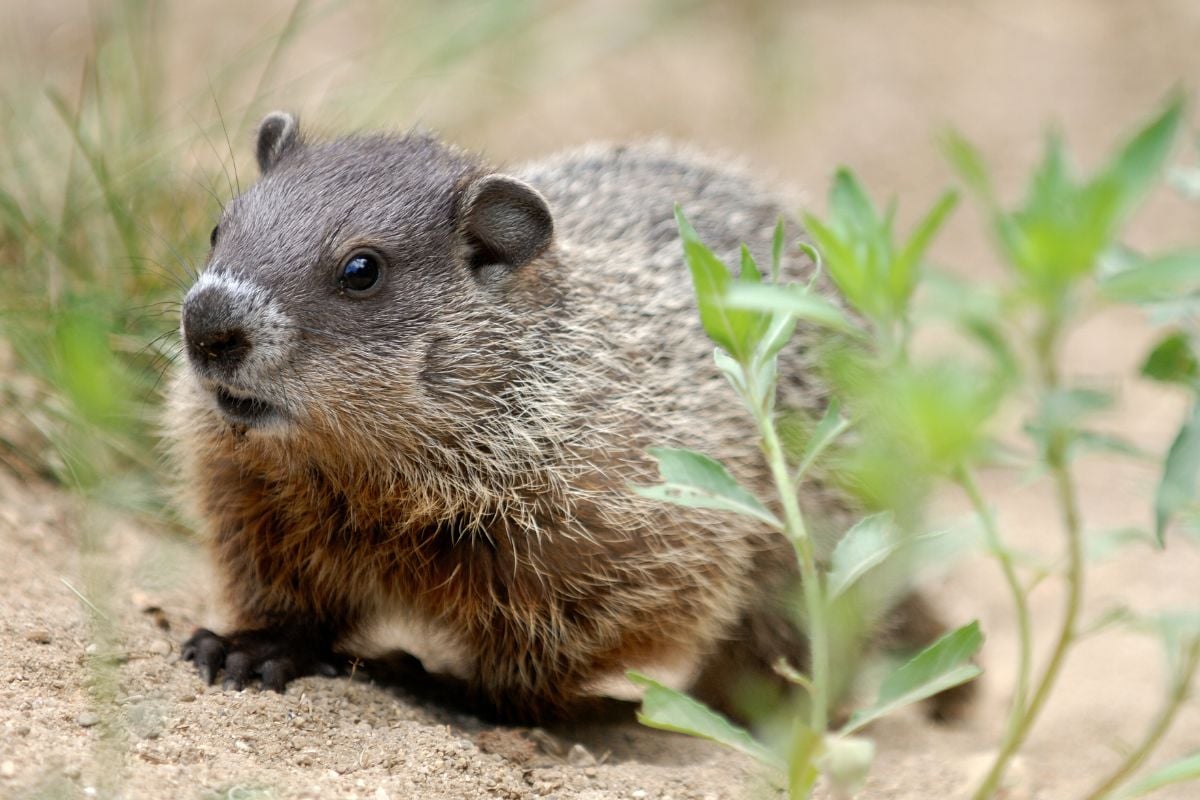 Similar to a groundhog, the woodchuck is also in the squirrel family. Like the squirrel, you can find woodchucks moving around through the day and preparing for winter hibernation. Because they are much larger than the squirrel, they do not have as many predators as matured woodchucks.

They are mainly herbivores but they do have a tendency to sneak in a little protein with grasshoppers and other large insects that populate the area. Because of their love for flowers and fresh fruits, they are a big nuisance to gardeners, much more than squirrels. 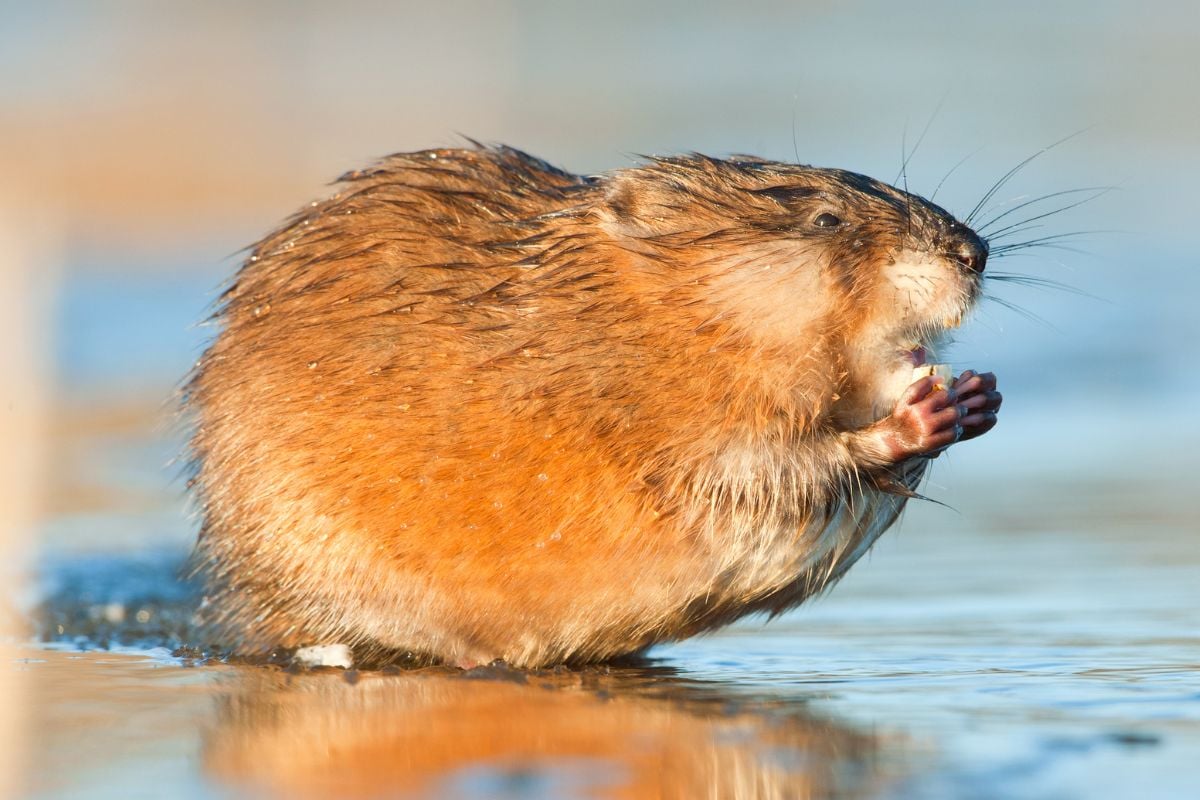 Spending part of its time in the water, the muskrat is similar to the squirrel in a few ways. It is a smaller rodent-like squirrel, and they spend their days foraging for both plants and some meat options. The way the squirrel dominates the tree tops, traveling acres at the time, the muskrat is able to make similar moves in the freshwater.

They are both found in North America and often in the same habitat. The muskrat does have a violent streak, however, with the ability to attack if it feels threatened. Squirrels let off the bark and attempt to discourage predators, but not in the same way. 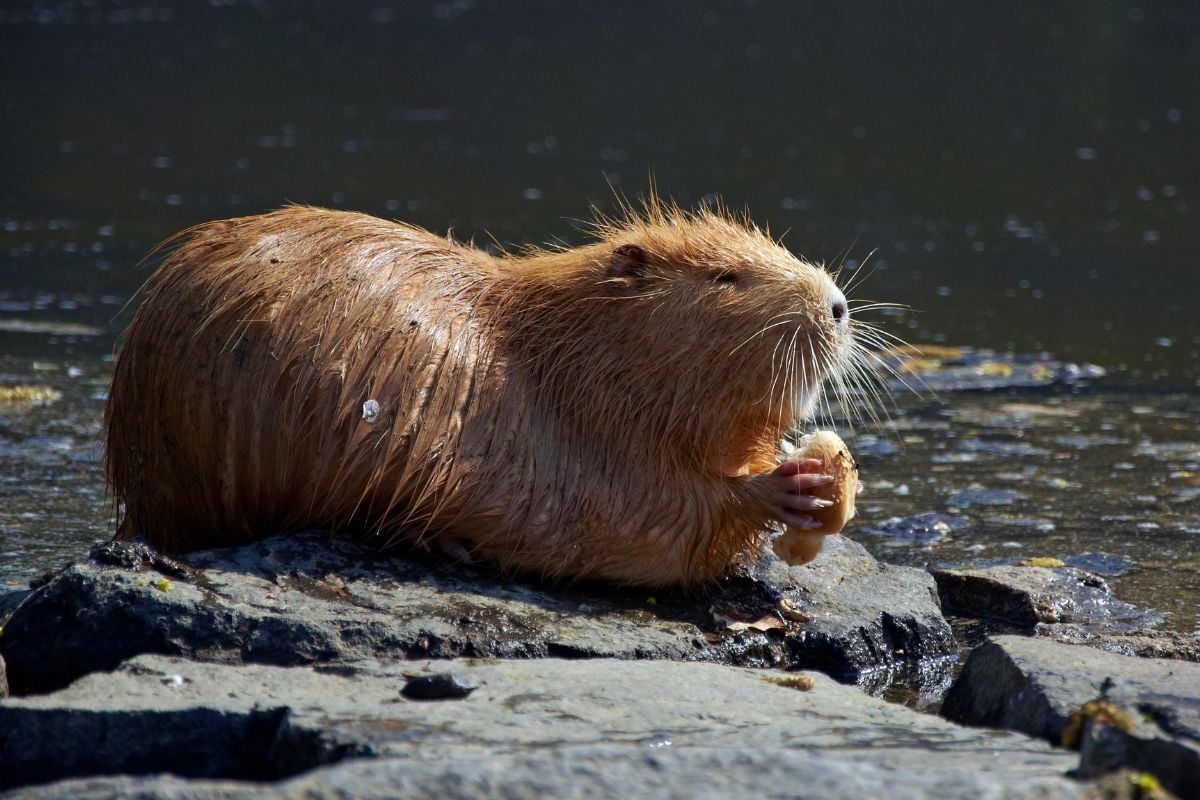 The Nutria is a cousin to the muskrat, which means it also shares similarities with the squirrel. It is another animal that prefers wetlands and excess water nearby. It is a long slender rodent like the squirrel but spends time swimming instead of jumping.

They do have a similar diet to the squirrel, so they are in competition for trees with nuts that have dropped nearby the wetlands. The nutria, however, is found exclusively in South America, where the squirrel is found in many more places. 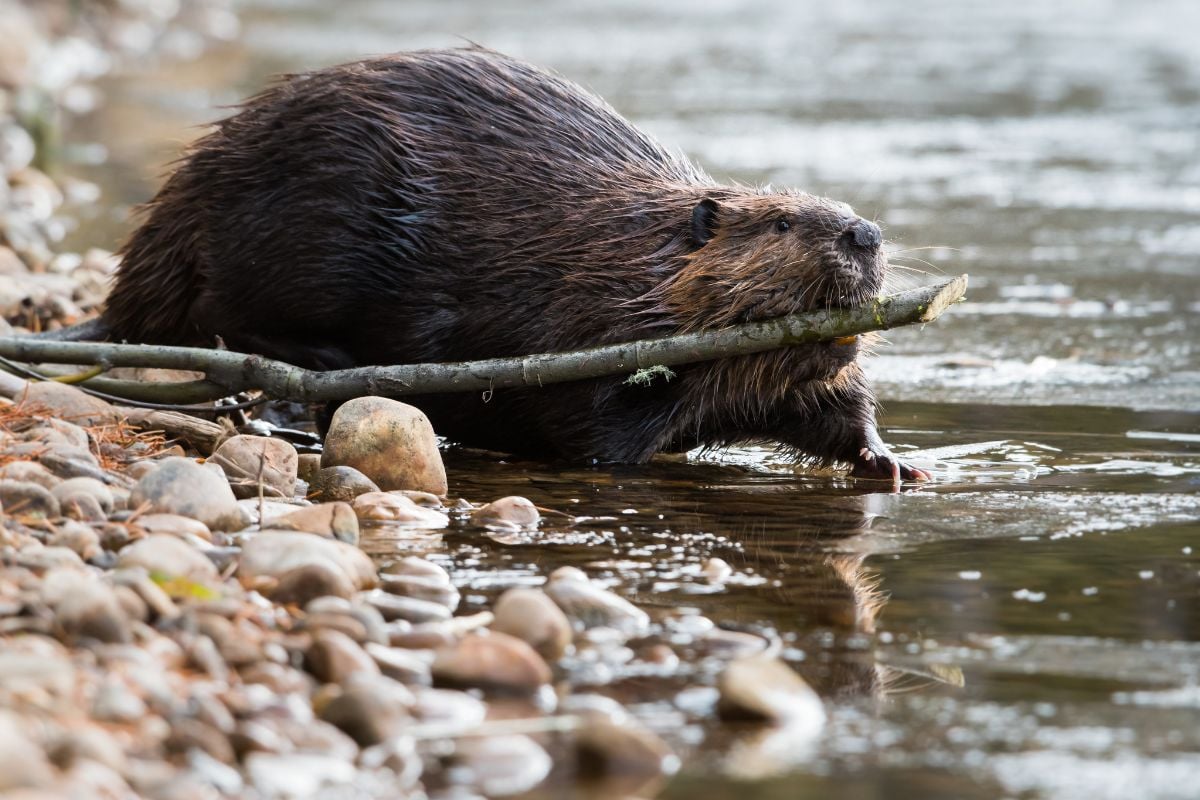 North American squirrels have more contact with beavers, as they are usually building dams beneath the trees where the squirrels are foraging. Sometimes they will use some of the squirrel food to help dam up an area if they are running low on materials. Beavers are also rodents and eat mostly plants and nuts like squirrels.

There is a big difference, literally between the two, since the beaver can get up to 65 pounds. The beaver can also live for several years, with some being up to 16 years old. 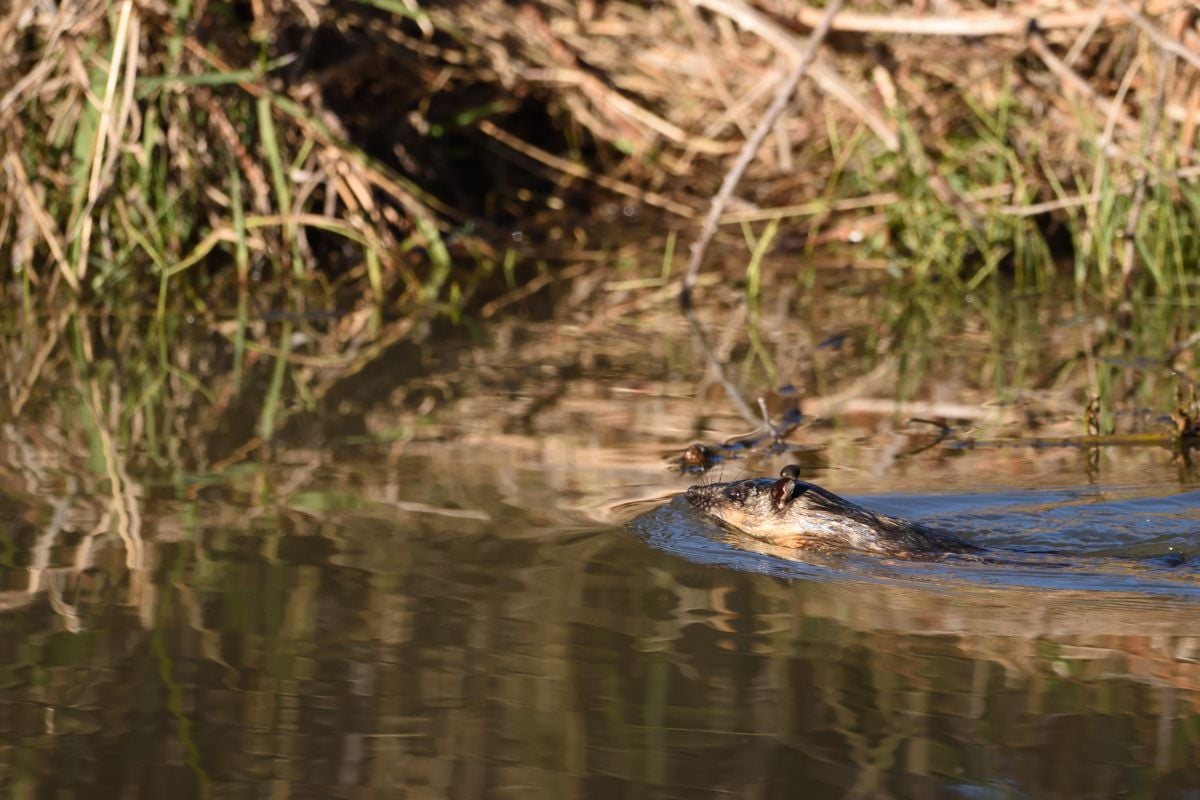 Found in Australia, the Rakili is a rodent species like the squirrel that is found out in the wind. With a small lifespan of 4 years, which is similar to the squirrel, as well as their size. They only get about a foot long and may weigh a couple of pounds at best.

The Rakali has a different diet, including more protein like fish, small birds, and frogs regularly. This is why they are found around wetlands and are willing to fight other rodent species who try to infringe. 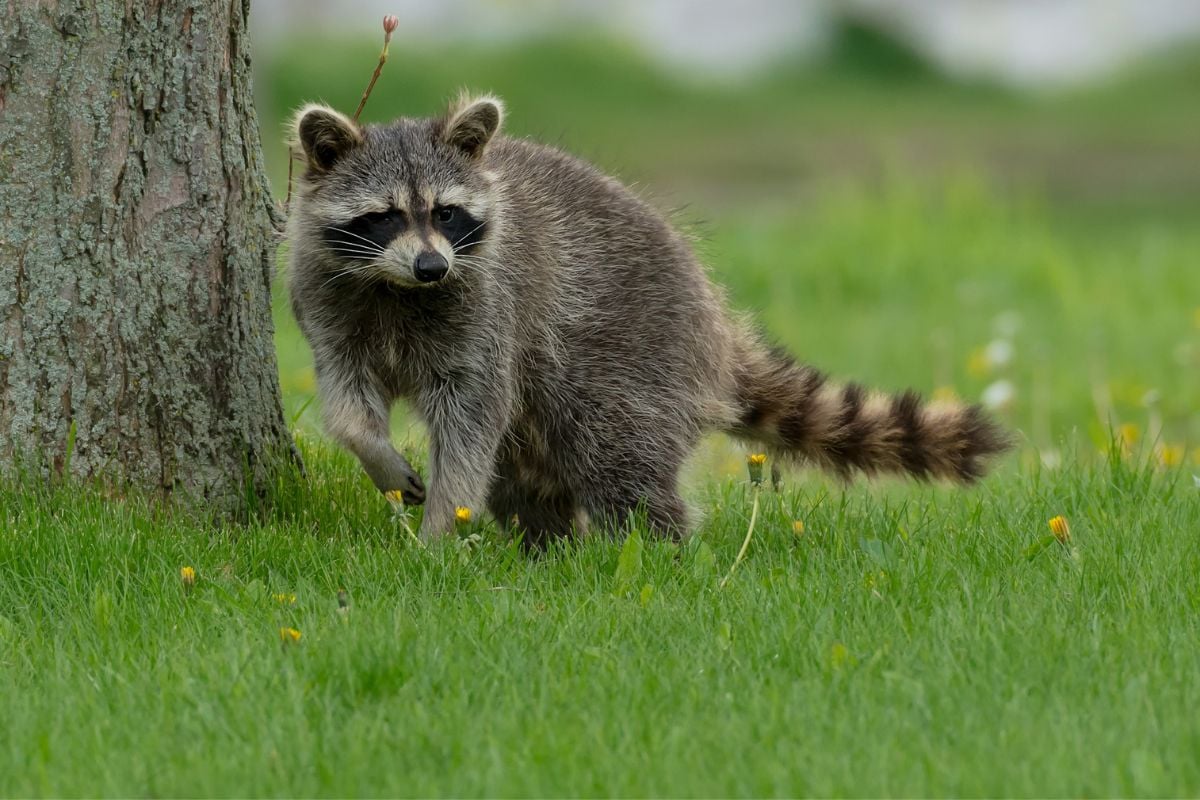 Sharing the trees of North America with the squirrels is the raccoon. These two rodents share the treetops, with the squirrels out during the day, and raccoons scavenging throughout the night. They both have long tails that help them jump from tree to tree and will seek out the storage of nuts that squirrels have made and take them.

They can both be a nuisance to homeowners, especially if they decide to make a home in the attic or top story of a structure. The raccoon is bigger than the squirrel, usually about twice as long, but they only live about half the life span at 2 years. 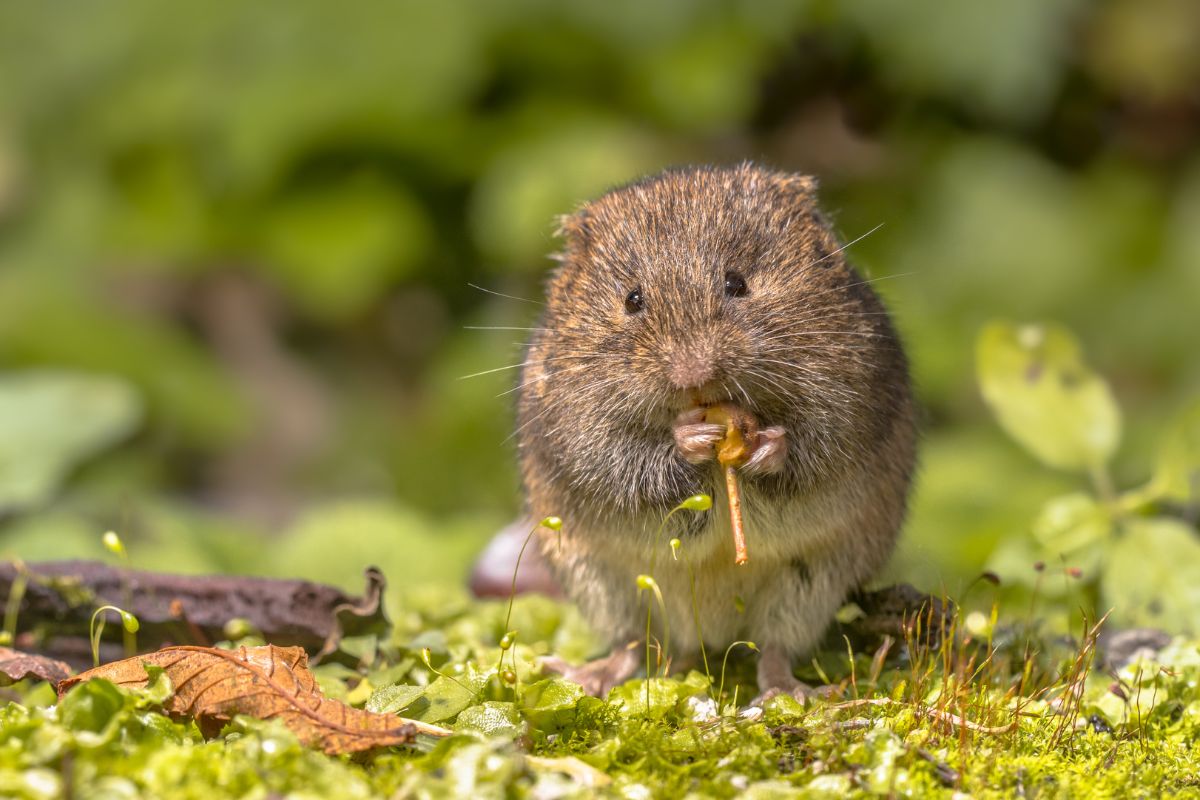 Finding a home in tall grass, the field vole is very similar to the squirrel making a home in the trees above you. It is native to the United Kingdom area and likes to hide in tall prairie grass. Like squirrels, they have a short lifespan of around four years and are herbivores.

You will find these mammals feasting on leaves, roots, and seeds around them. They are very quick like squirrels, scurrying on the ground the same way squirrels scurry through the trees. They can be a bit of a nuisance to gardeners, enjoying the bulbs of their plants as their main diet source. 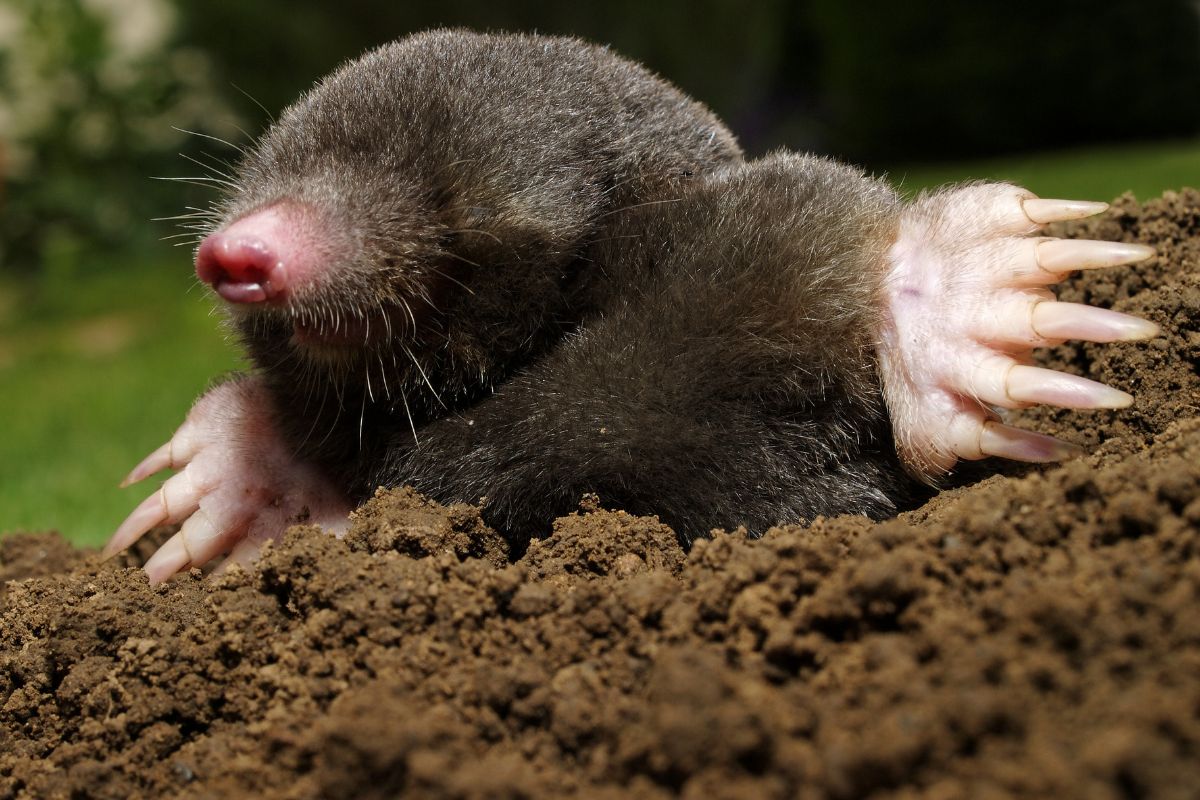 Another mammal that is found throughout the world is the mole. They like to burrow like the squirrel and are small in size. However, they are more protein-based in their diets.

They enjoy the worms that are found in the soil. Like squirrels, they like to store their food, so they immobilize the earthworms and take them back to their storage area so that they have food for their young and throughout the colder months when there are fewer worms stirring around. They do dig tunnels, which is different from the squirrel and they are found always underground.

However, they are small in size and can move relatively fast. 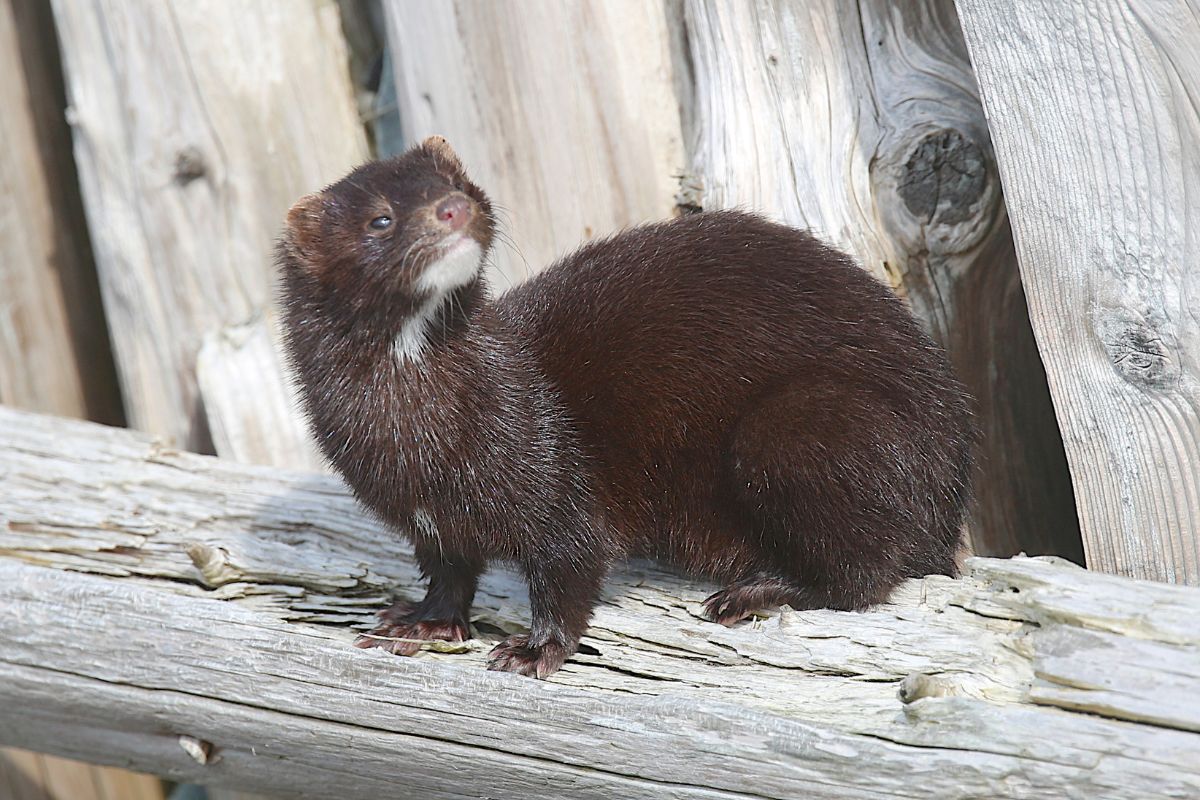 These cute and furry mammals are slender and small like squirrels. They dig dens close to bodies of water so they can have easy access. Like squirrels, they tend to be less social and only interact with others when they are mating.

Also, they are out hunting and prowling around for food during the day, while their squirrel counterparts are foraging in the trees. The biggest difference between these two mammals is the diets they choose. While squirrels are herbivores, the mink eats lots of meat, including snakes, waterfowl, fish, and even smaller squirrels and chipmunks if there are accessible. 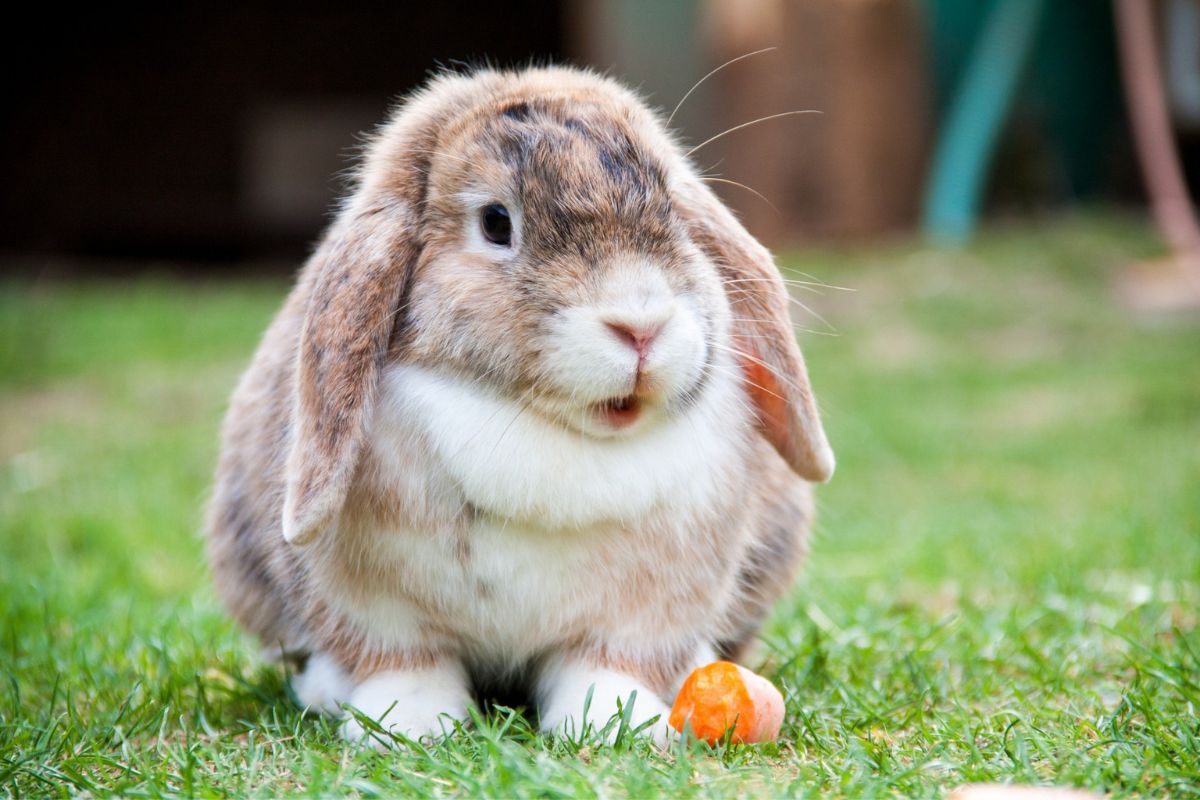 Another rodent forager that is found throughout the world, like the squirrel, is the rabbit. Both herbivores and rabbits spend their time eating vegetable plants when they can find them or wildflowers, clover, and other natural plants growing in the area. They do not store their food, and they reproduce substantially quicker than squirrels.

The majority of rabbits do not make it to their first birthday when they are in the wild, unlike squirrels, so they reproduce at a faster rate. Both of these animals are active throughout the day and into the early night hours. They are both prey to similar predators, however, because they are smaller in size. 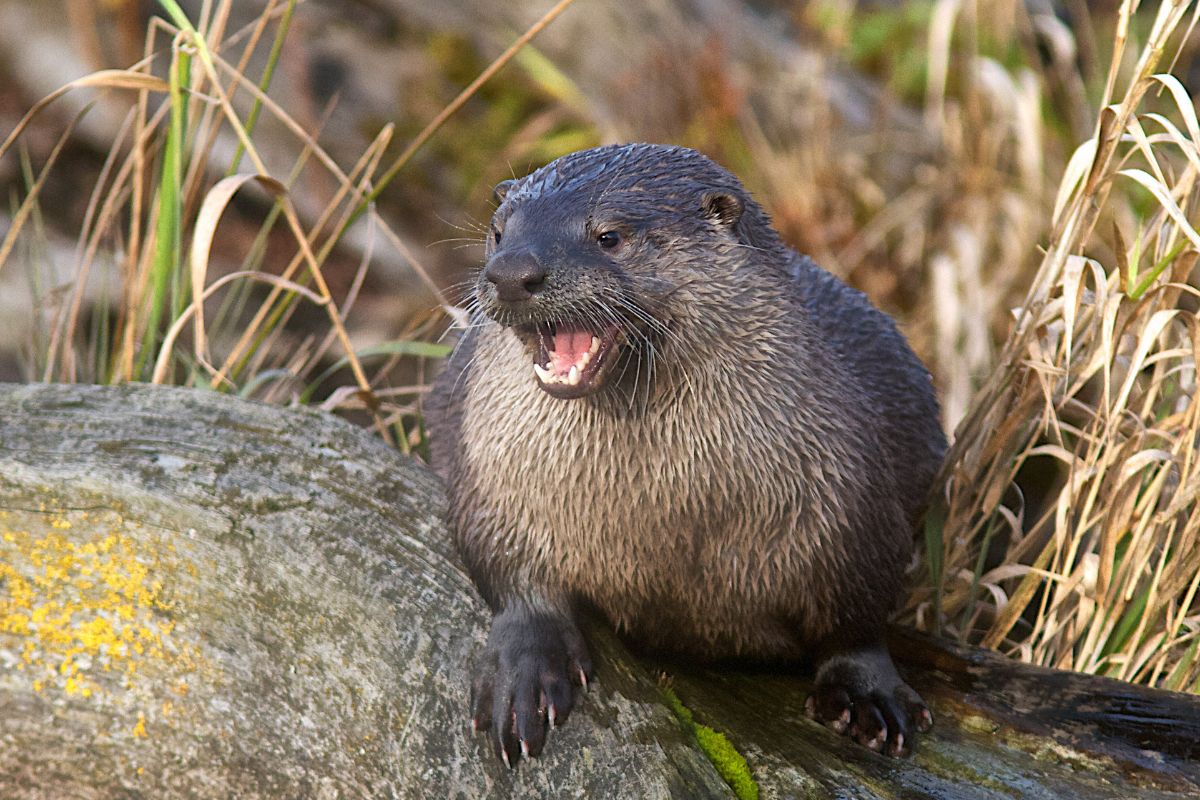 While they are other animals spending most of their time in the water, the similarities between the river otter and the squirrel are pretty significant. There is a species of river otter across the world just like squirrels. Like squirrels, they like to communicate with other otters, and they have their own unique sound they use when communicating.

This is similar to the squirrel bark that you hear coming down from the trees. In addition to the water, another big difference between the two is their diet. River otters enjoy eating lots of meat, including small fish, turtles, and frogs.

This is a far cry from the herbivore diet of a squirrel.

How many different types of squirrels exist in the world?

At this time, there are different types of squirrels found around the world. Squirrels are able to travel and adapt to different areas, which is why some are of different colors, have different coats, and have different abilities. At least 10 of these squirrel types are found in the United States alone.

No matter where you are out hiking or visiting, there is some type of squirrel native to that area.

How often do squirrels mate?

Unlike many of the animals on the list above, squirrels mate and have litters twice a year. There will often be a litter in the early spring between February and March and then again by the end of the summer season in September.  They keep their babies in the nest until they have matured and are able to fend for themselves.

Each litter can produce between 2 and 4 babies each time.

Why Are Squirrels Always Chewing?

Every time you see a squirrel, you may notice that they are chewing. This is because they are trying to keep their front teeth filed down. They have teeth that are constantly growing, so they need to always be chewing or they will experience significant pain.