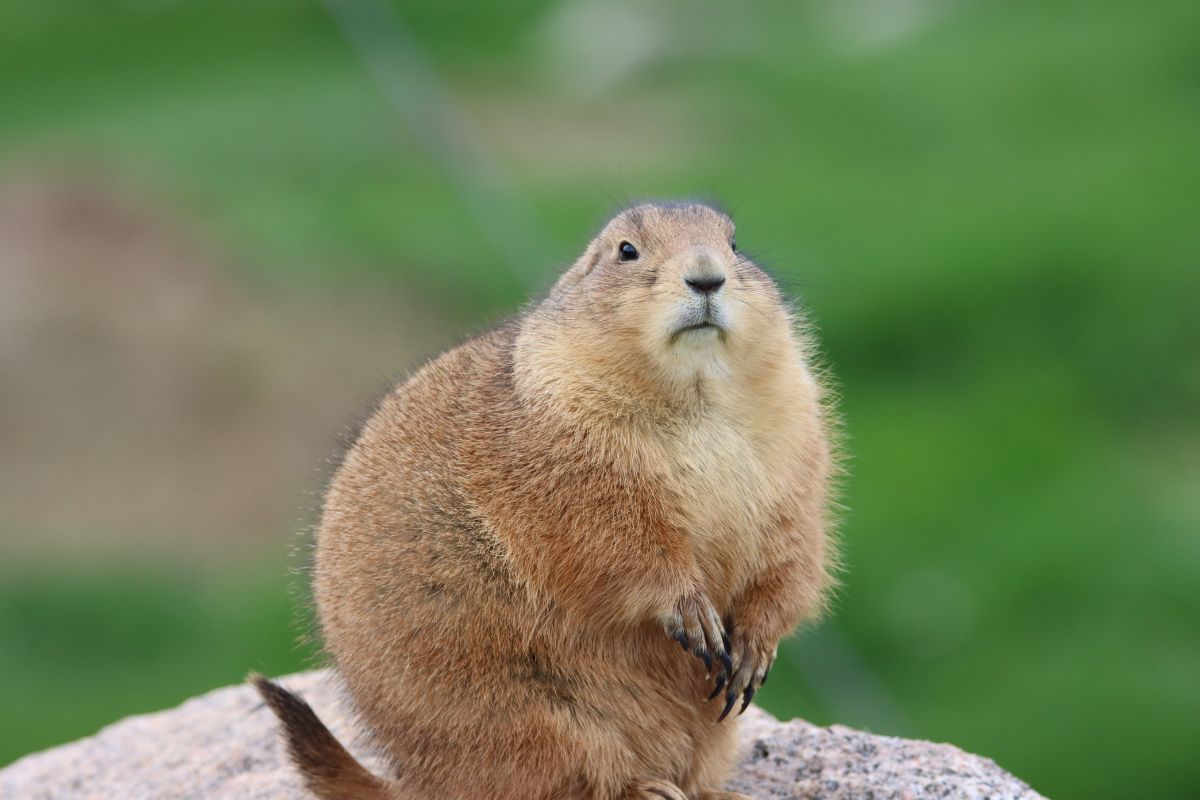 The prairie dog is a small, burrowing animal that resembles a ground squirrel in appearance and behavior. It has long been an essential part of the ecosystem because it eats grasshoppers, crickets, beetles, and other insects. Other animals are similar to the prairie dog but do not live underground. 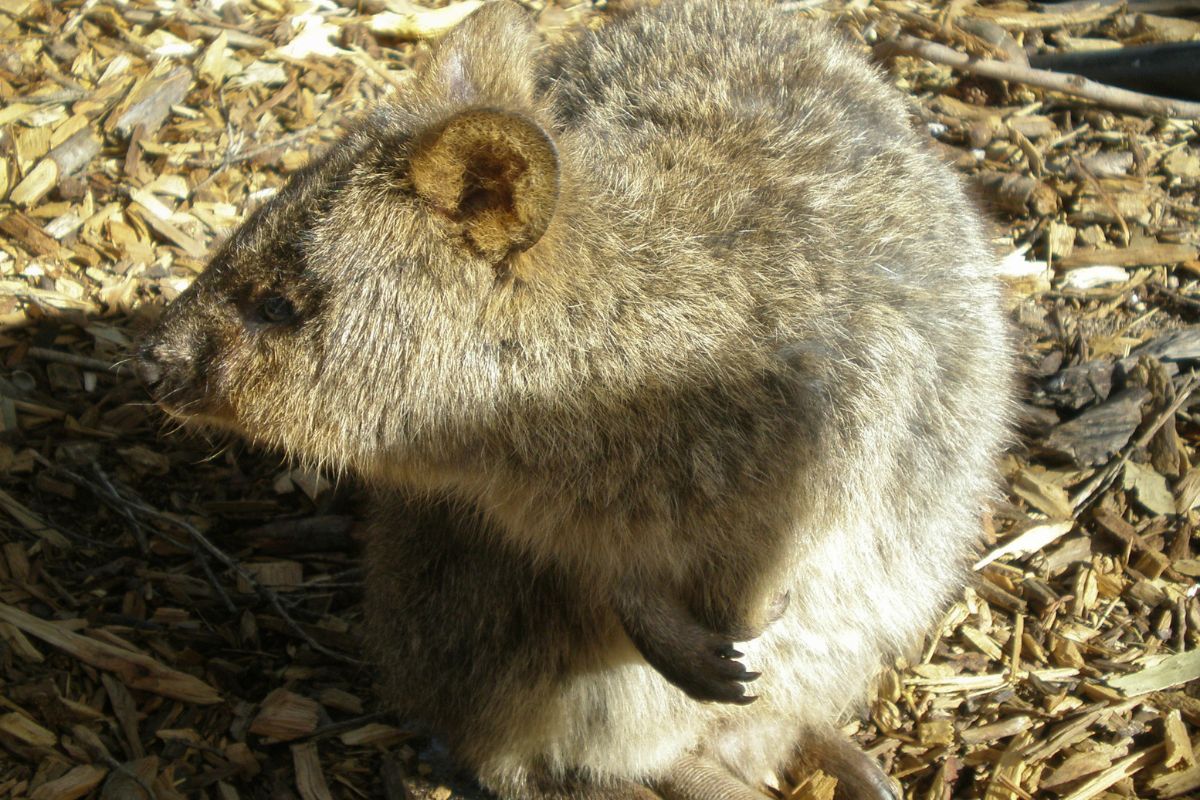 The kangaroo rat looks like a large mouse with short legs. They live in the Great Basin and Great Plains of western North America. Its range extends from central Mexico to the extreme southern area of Canada.

It has a fifth toe on its hind feet, which allows it to dig into the soil for food. Their upper jaws feature two molars on each side, which helps them to chew twice as fast as most rodents. They often hop around when running and can reach speeds up to 30 mph.

The kangaroo rats are nocturnal animals with a lifespan of about three years. Their diet consists of seeds, roots, leaves, and fruits. 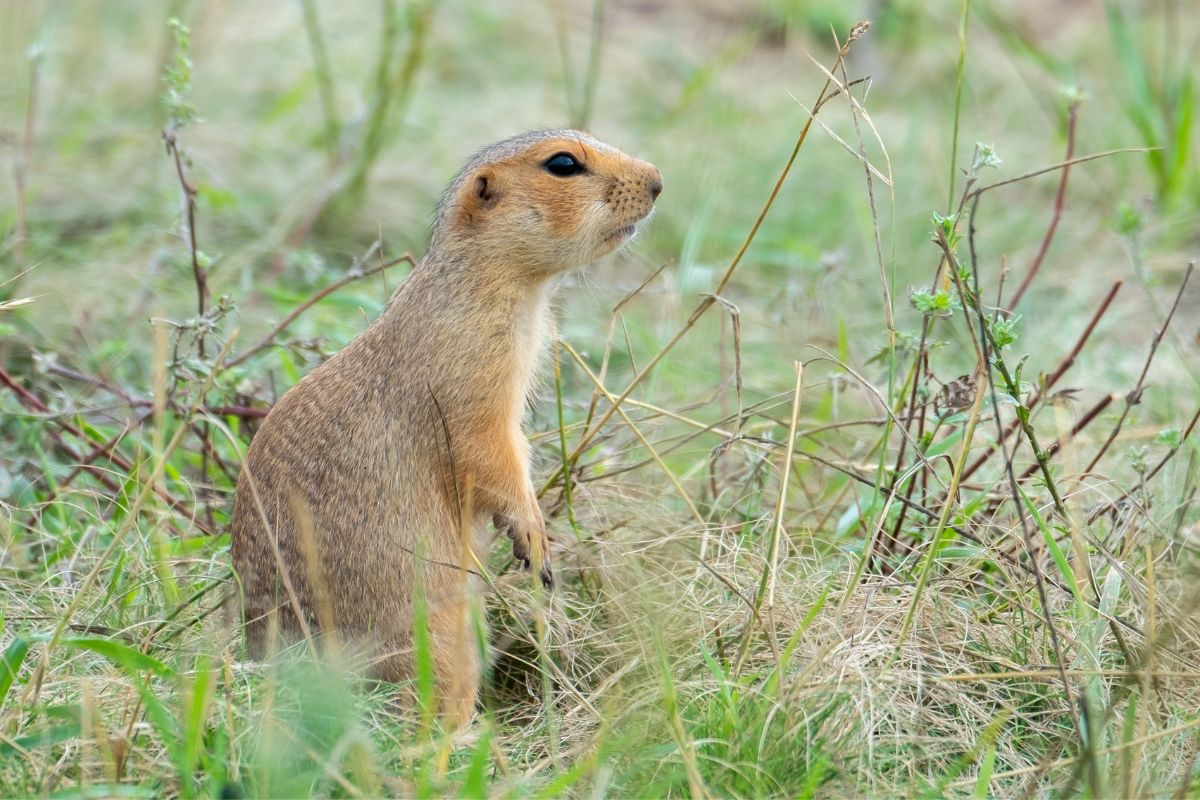 The pocket gopher (Thomomys bottae) are medium-sized rodents that live in tunnels beneath rocks or soil. Their coats are smooth, short, and soft and vary in color from brown, grey, and black. Their short legs feature long front claws, allowing them to climb easily through narrow spaces.

They spend most of their time feeding in their burrows, which are located approximately 5 feet below ground. These burrows include many deep chambers for food storage, nesting, and defecation. Their diet consists of grasses and shoots.

During the winter, they supplement their diet with tubers, roots, and bulbs. They have a lifespan of about five years. 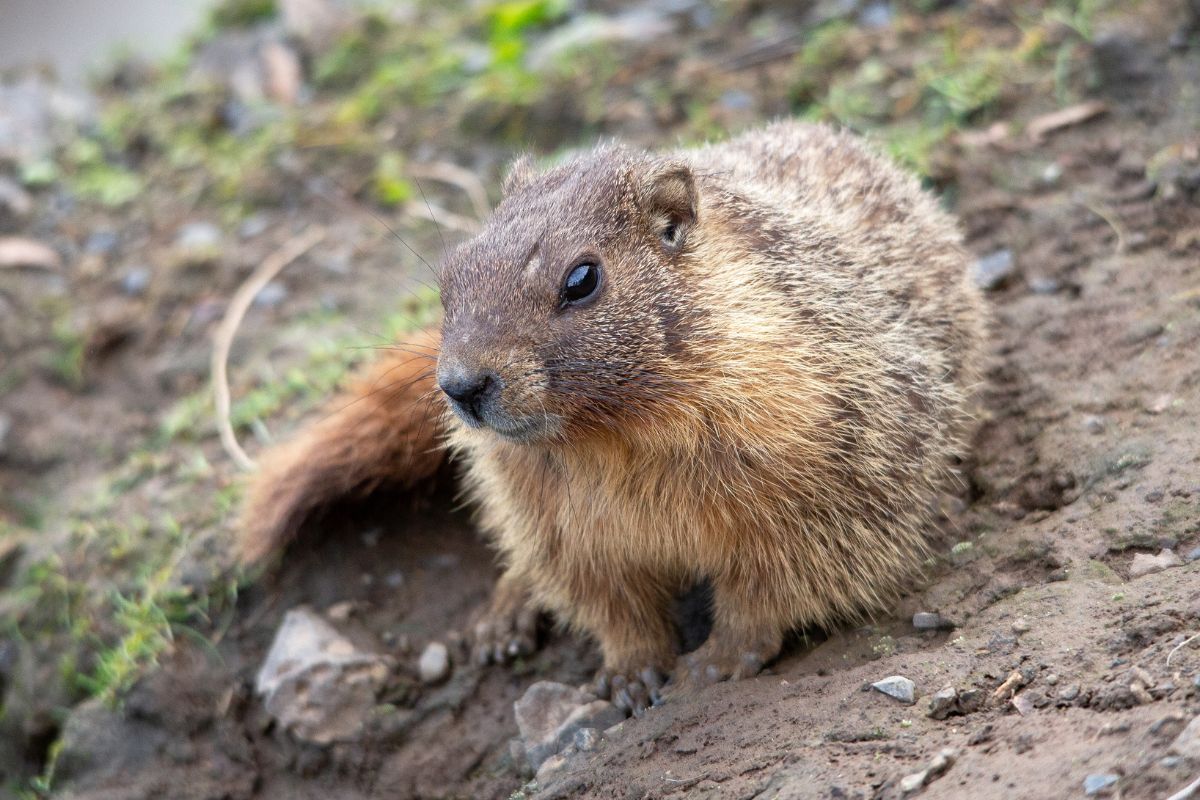 The yellow-bellied marmot is similar to squirrels, only larger and stockier. They are found throughout the western United States, Alberta, and British Columbia. Open territories such as pastures with dry, warm climates are their favorite places to inhabit, but they’ll build their burrows under rocks if they want adequate cover.

Yellow-bellied marmots can live alone or in colonies. Their social interactions with each other are either amicable or agnostic. Peaceful relationships occur when the marmots share a burrow.

Agnostic relationships happen when a marmot from another burrow tries to intrude. Yellow-bellied marmots eat a wide range of seeds and plants in late summer to prepare for hibernation. 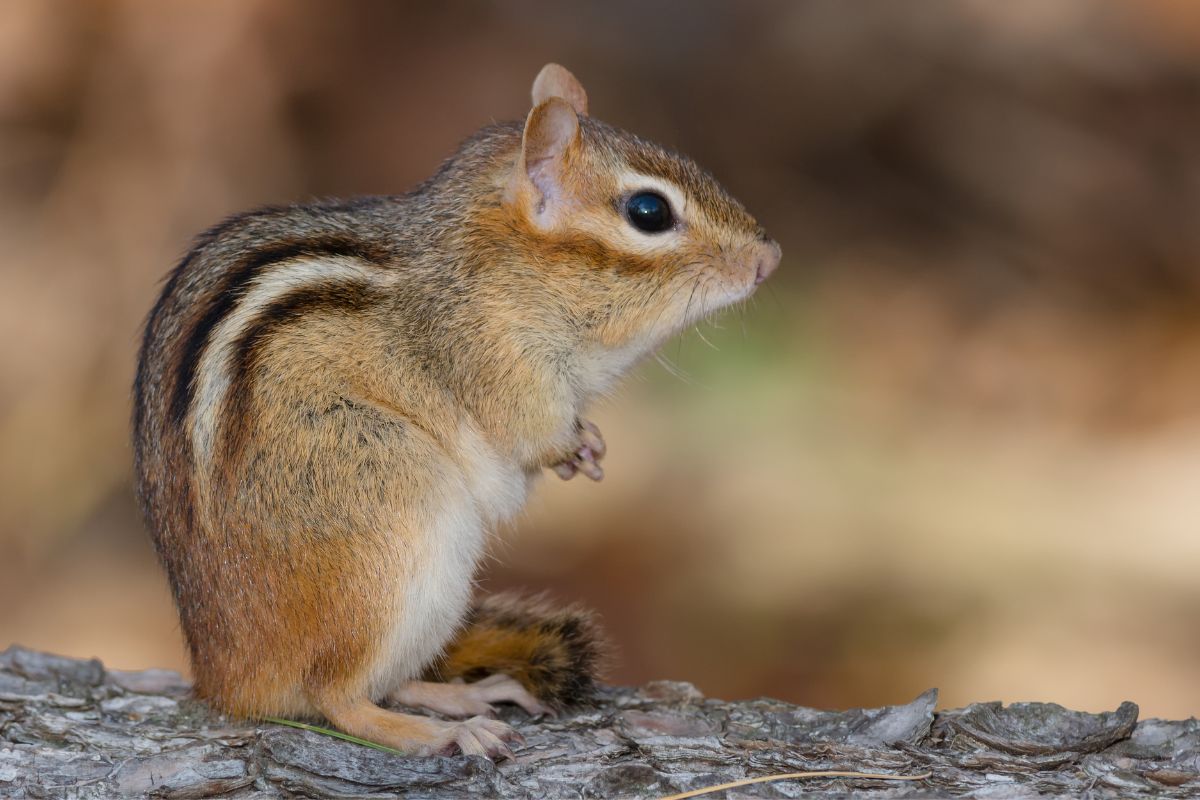 Found in the eastern regions of North America, the Eastern Chipmunk features a striped coat that fades during the winter months. In addition, they have pouches on their cheeks, which they use to bring large amounts of food back to their burrows. They prefer to live in forested areas or brush land that offers an abundance of rocks, logs, and tree stumps.

But, if they habit suburban areas, gardens are their favorite spots to inhabit. These rodents are solitary and highly territorial in their burrows. A typical burrow features numerous entrances and tunnels that connect to each other.

Their nests are located in a large chamber and are made of chewed or crushed leaves. They use the other chambers to store their food. Eastern chipmunks eat seeds, fruit, and nuts. 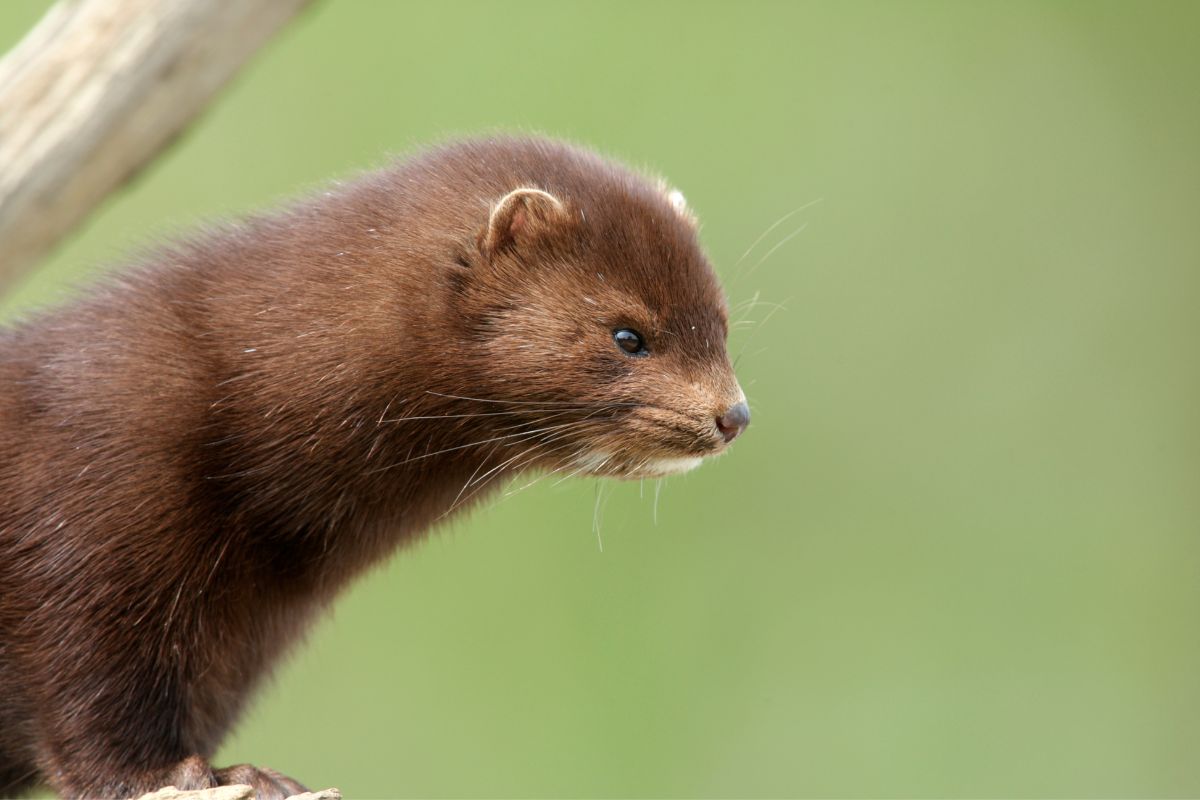 The American mink is considered the cutest member of the weasel family. It is typically harvested for its fir, which features oily and waterproof hairs in shades of brown to black. They are North American natives commonly found in Canada, Alaska, and throughout the United States.

They like to inhabit areas with plenty of water, such as marshes, lakes, and coastlines. However, they are also known to inhabit dryer areas that are not close to a water source. That depends upon the available food supply and if there is enough vegetation to provide cover.

American minks prefer solitude. Males are incredibly intolerant of other males and mark their home range boundaries with their musky secretions. They are nocturnal animals who dig burrows in streams, lakes, and riverbanks.

Or, they use old dens that other mammals have abandoned. They can swim to depths of 100 feet when searching for food. Their diet changes with each season.

During the summer, they eat crayfish, frogs, fish, water birds, and small animals. In the winter, they’ll eat whatever mammal they can catch. 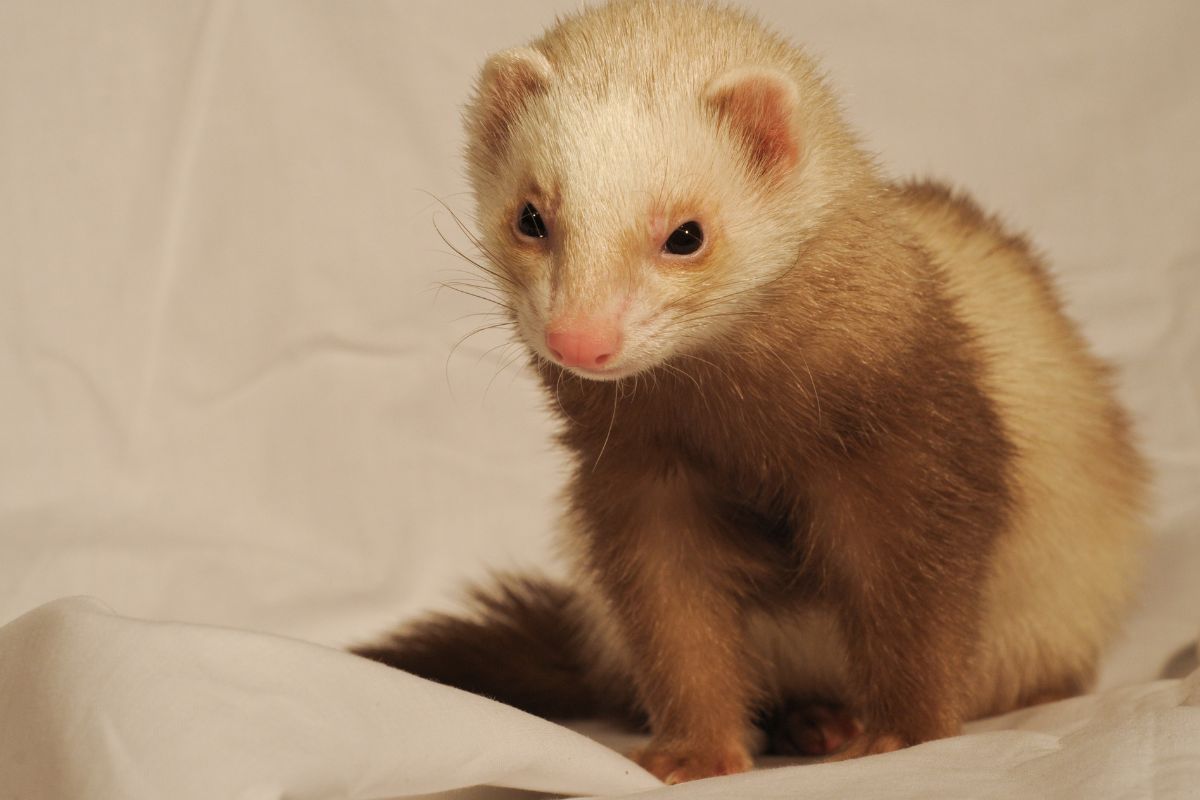 Belonging to the weasel family, Domesticated Ferrets make good pets because they are social and friendly toward people and female ferrets. That said, they can be territorial with a male. Like the prairie dog, it loves to burrow and prefers sleeping in an enclosed space.

Ferrets can sniff the secretions of the scent glands from another ferret to determine the gender and whether it’s familiar to them. Domesticated ferrets often mate with many females. The breeding season occurs between March and August, allowing females to have up to three litters of up to 7 kits.

They mainly eat dry foods that consist of meat, but their owners might feed them live prey (rabbits or mice) to help them remain true to their natural diet. 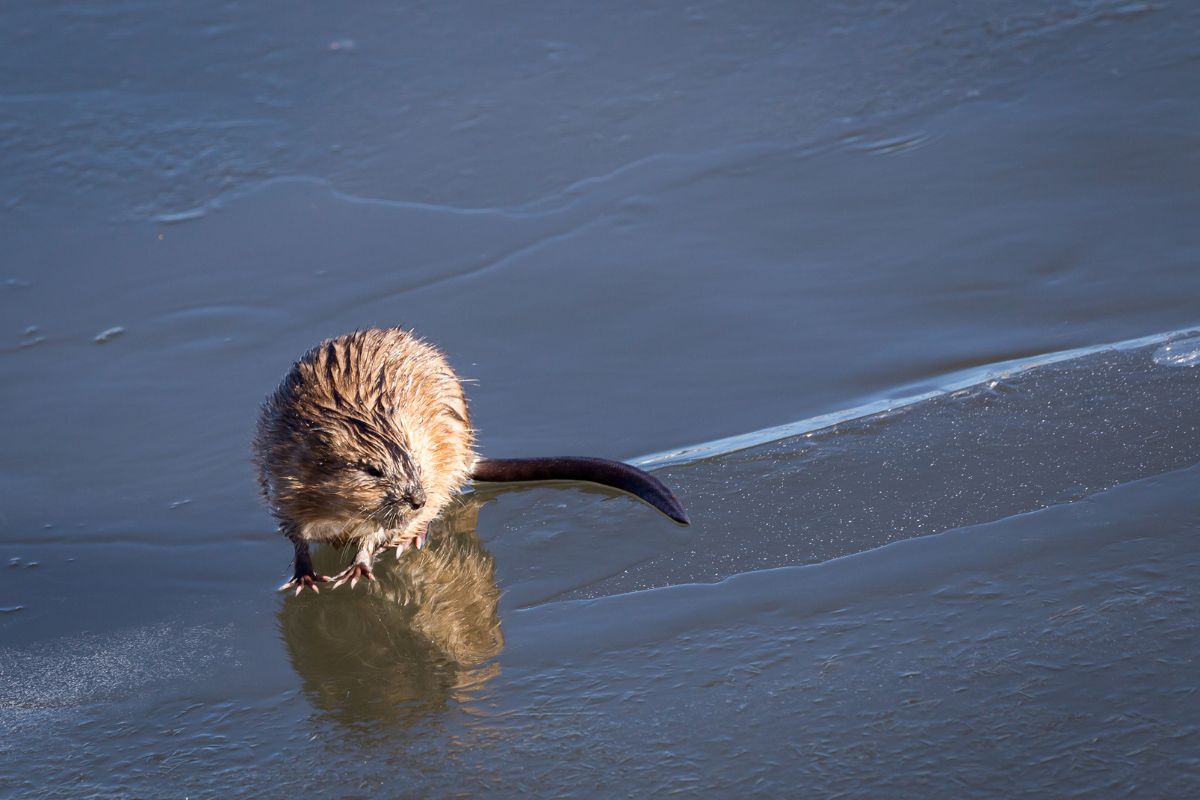 The muskrat is a semi-aquatic rodent that digs holes in wetland areas. It has a thick brown coat and a long scaly tail, which is flat and acts as a rudder for easy maneuvering in the water. They are found in Eurasia and North America and inhabit saline or freshwater wetlands.

Muskrats like to live in large family groups, each with its own range. They build nests to protect against the elements and predators, creating an underwater entrance between 6 to 8 inches wide. Muskrats are nocturnal animals and excellent swimmers capable of staying underwater for up to 17 minutes.

Their diet consists of various aquatic vegetation. Depending on their geographical location, they might also eat frogs, snails, small fish, and shellfish. 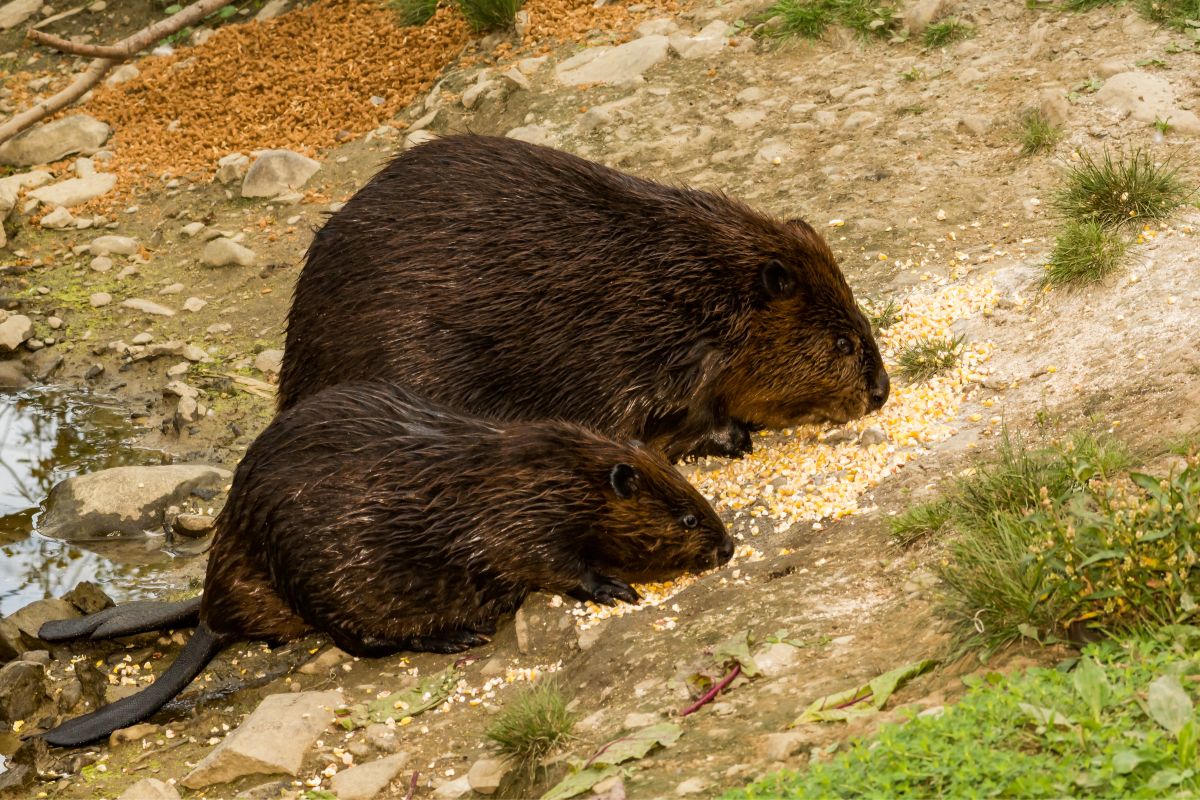 The American Beaver is a semiaquatic rodent that builds dams and ponds for water storage. It has a thick coat with an underlayer that protects the animal from the elements. American beavers are highly sociable and establish colonies of about eight animals in each one.

They all live within a hierarchy and are very territorial regarding outsiders. They are most active at night but can be seen working during the twilight hours. When searching for food, the beaver is willing to travel long distances.

Once they find food, they transport it back to the lodge and open the water canals for easy access. They build their dams in a way that can withstand the water flow pressure. American beavers feed on tree bark and cambium (the inner layer beneath the bark).

Some of their favorite trees include aspen, birches, maples, willows, and alders. They also eat aquatic plants, including buds and roots. 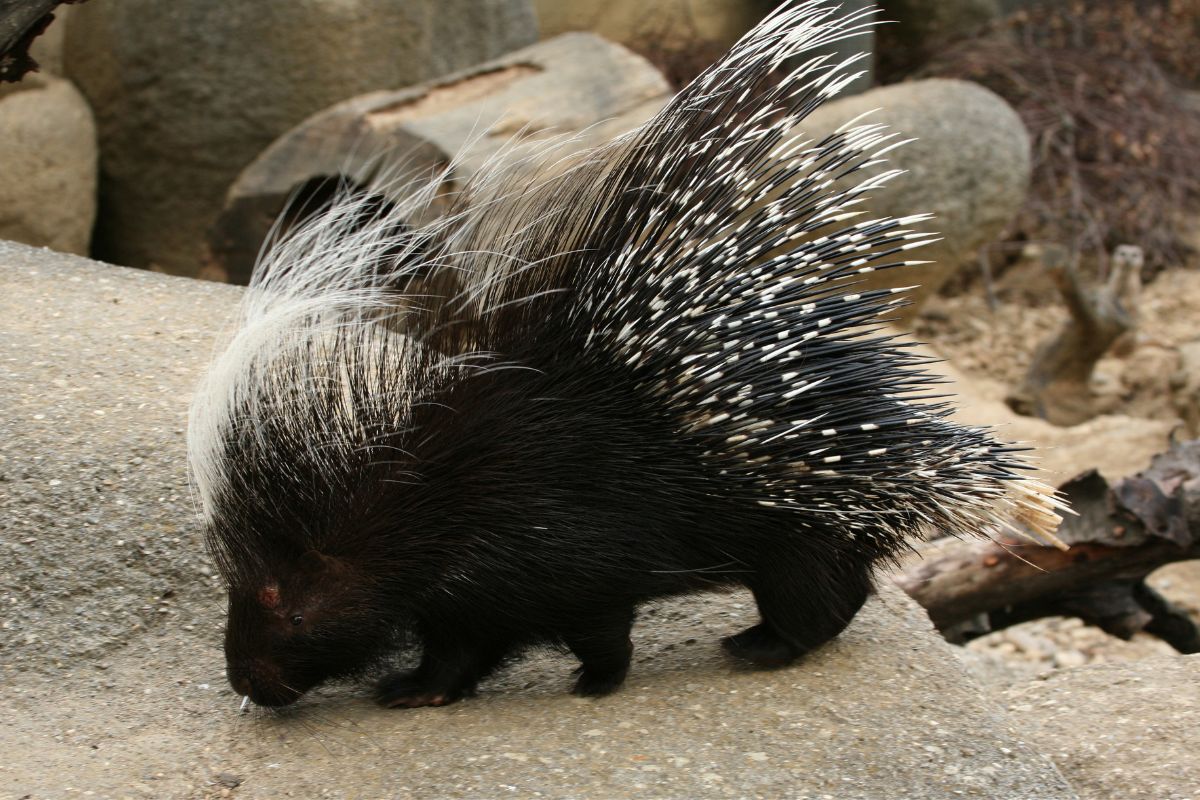 The crested porcupine is the world’s largest of this species, measuring up to 33 inches long and weighing up to 60 pounds. Its 14-inch black and white striped quills raise into a crest when the animal is frightened. These quills are extraordinarily sharp and make a hissing sound when they begin to vibrate.

Crested porcupines inhabit various outdoor environments in Sicily, Italy, and Africa’s Mediterranean coast. Nocturnal by nature, these rodents spend the day inside their dens and venture out to search for food at night. They are social animals, with an adult pair and one or two pups.

The parents-to-be select a special chamber in their burrow system and line it with grass before the mother gives birth. The family lives in a complex burrow system, where they live during the winter months without hibernation. Crested porcupines are herbivores feeding on vegetation, fruit, and cultivated crops.

They round their diet off with small vertebrates and insects.

The plains pocket gopher is one of 35 burrowing species with cheek pouches, which can hold food up to three inches. They are found across the Great Plains region of the United States and the Manitoba province of Canada. These gophers have short fur that ranges from brown to black on top and lighter shades on their bellies.

Their short, tapered tails are almost hairless. Plains pocket gophers live in areas with deep, powdery, sandy soils that will accommodate their burrowing lifestyle. Their tunnel sizes can range up to 164 feet or more, depending on their energy level.

These tunnels include nests and food storage caches. They spend most of their time inside their nests, venturing above ground whenever they need food or a mate. The gophers breed once per year, producing up to six pups. 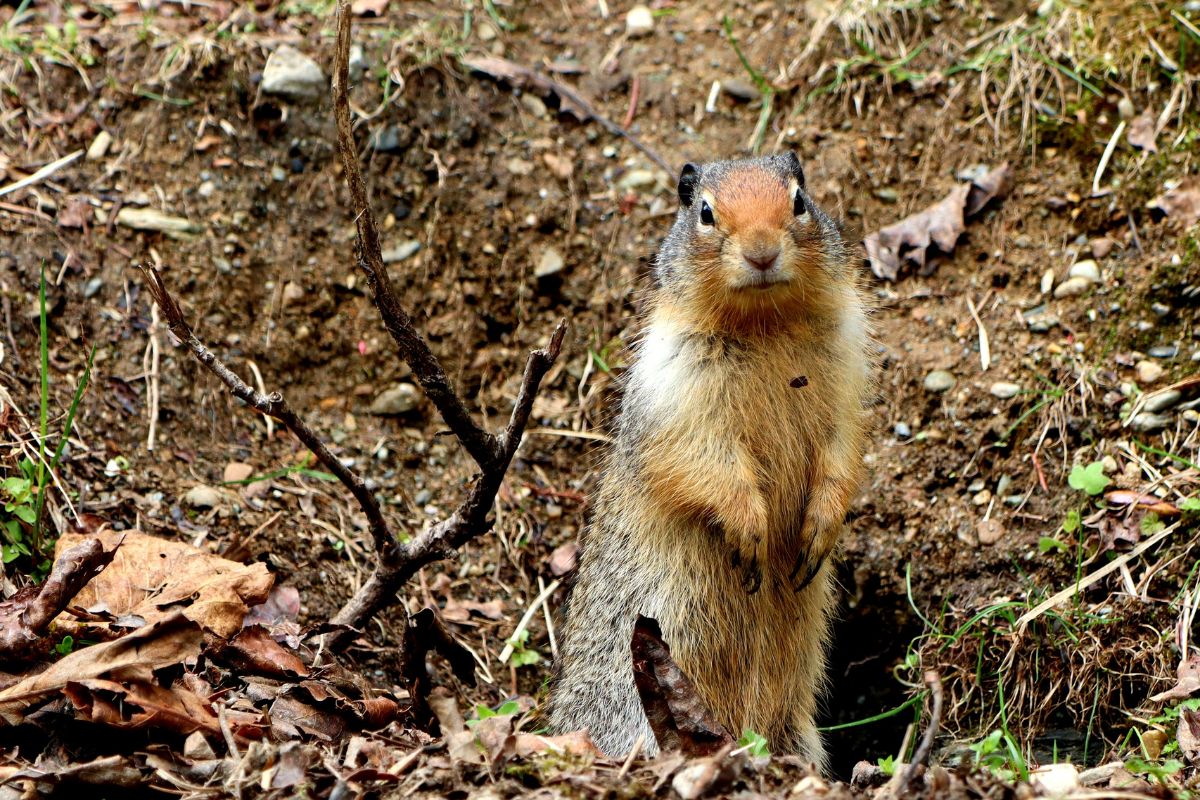 The Columbian ground squirrel is a smaller version of the groundhog. They look like chipmunks, but they have longer tails and larger ears. These squirrels live in Canada and the northwestern United States and hibernate for approximately seven months out of the year.

Grasslands and meadows are their favorite places to live. Columbian ground squirrels live in large underground colonies. Once the young males mature, they leave the colony to establish their own territory.

They begin storing food in the early spring before plants start to grow. Their diets consist of stems, bulbs, flowers, leaves, seeds, and fruits. They also eat insects and spiders. 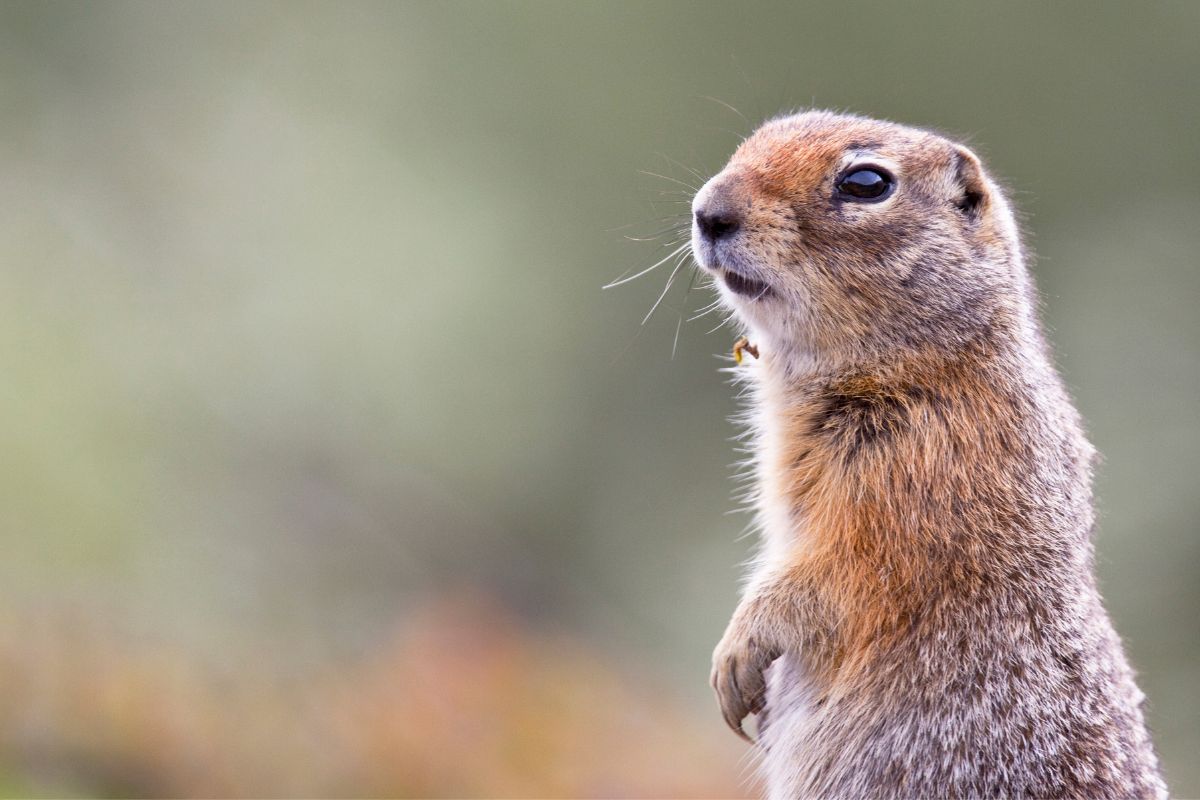 These squirrels build extensive burrows as a means to survive the climate and predators. Arctic ground squirrels live in colonies of up to 50 squirrels. These colonies have a dominant male (who drives the other males away in the spring), several females, and they’re young.

Their burrow system is complex, with entrances that are located beneath rocks, trees, or logs. They hibernate for approximately seven months out of the year, emerging in March or April, depending on the climatic conditions. The diet of the arctic ground squirrel consists of bird eggs, insects, and occasionally their young.

A native of California’s Mohave Desert, the Mohave ground squirrel, has highly developed survival skills that help them survive the area’s extreme temperatures. Their coats match their sandy environment, making them very hard to find. The squirrel lives a solitary lifestyle in open areas that contain many herbaceous, shrubby plants.

The gravelly or sandy soil allows them to make their burrows. They rarely venture far from these burrows and use their coloring as camouflage to avoid predators. They build up their fat reserves and hibernate in their burrows during the summer and fall months.

Their dormancy ends around February, when the temperatures drop up to 30 degrees Celsius and the food supply is low. Mohave ground squirrels eat seeds, forbs, fungi, and fruits. On occasion, they’ll eat caterpillars. 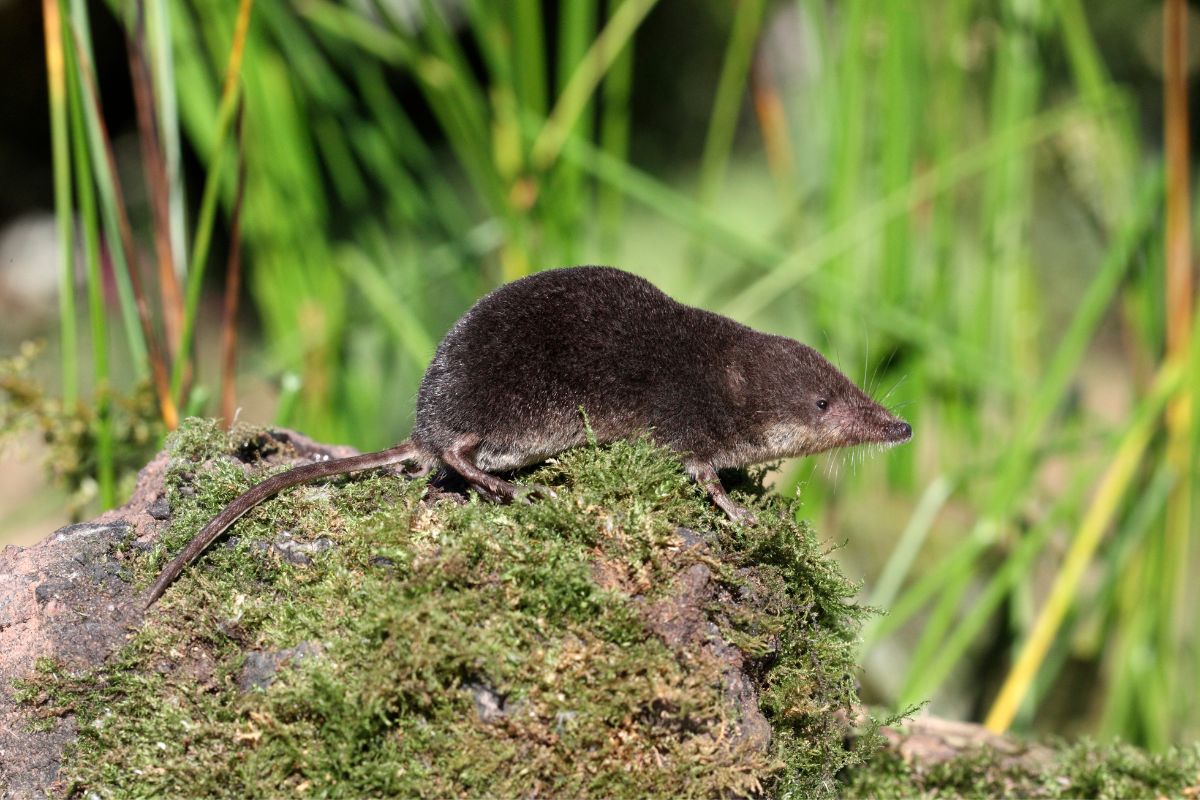 The Northern Short-Tailed Shrew is the largest of the shrew genus and inhabits the northeastern part of the United States and southern portions of Canada. Its dorsal coat is made of thick, velvety fur that comes in black, silvery gray, or brownish-black. These animals inhabit various terrain, including grasslands, household gardens, marshy areas, and more.

Their preferred habitats are moist with thick plant cover or leaf litter. Northern short-tailed shrews are nocturnal and active year-round. Unlike other shrew species, they prefer to tunnel below-ground.

They like to keep their nests clean and use separate chambers for waste deposits and food storage. They are solitary, voracious insect hunters and one of the few venomous animals in existence. They have limited vision and sense of smell, but their fine sense of touch makes up for this.