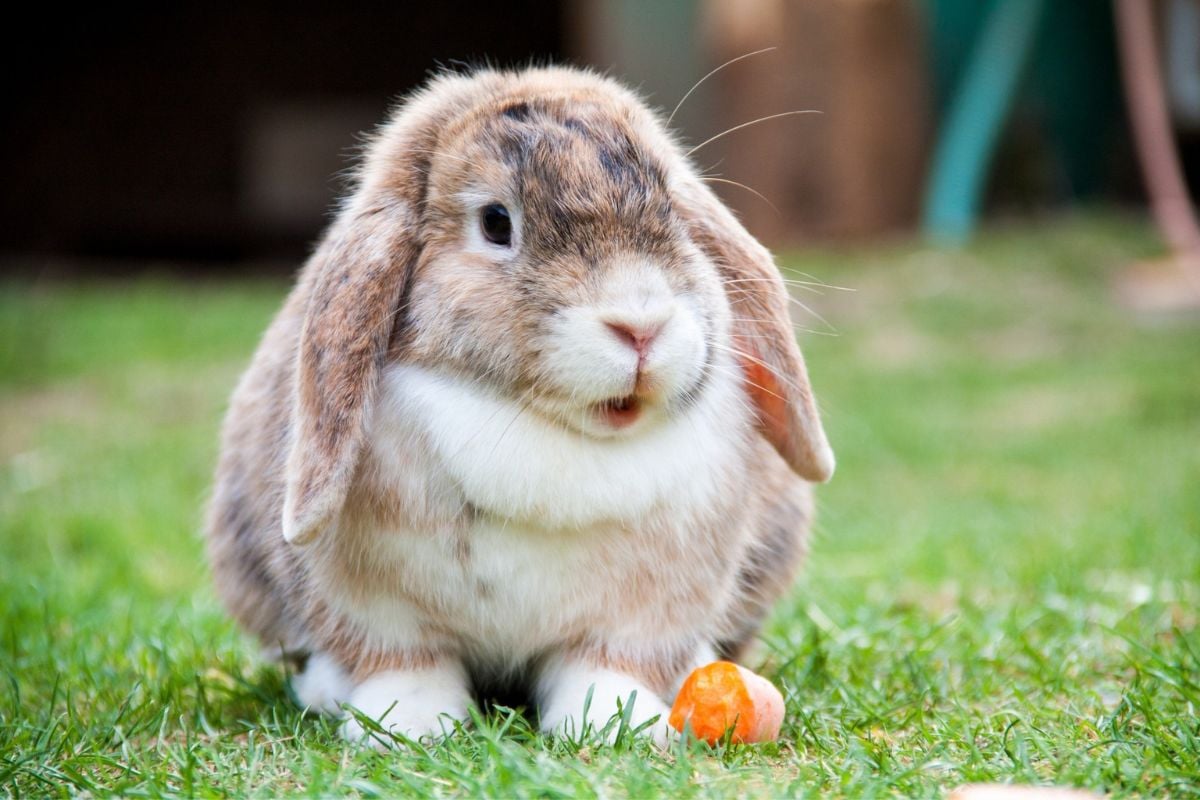 Rabbits are furry and delightful little creatures. For most of my life, I associated them with two things: Easter and the film Fatal Attraction. I never gave much thought to them in general until a friend of mine invested in a rabbit farm.

I was, first of all, surprised that there were such things. I was also stunned that my friend—an independently wealthy man who has built up and sold several businesses—would put his money into such a venture. But apparently, as I learned over a dinner party I had thrown for him and a few others, rabbits are in high demand for various purposes.

From children’s hospitals to fine restaurants, rabbits are all the rage around the world. I am a writer, so I like to learn everything about the subjects that smack me as interesting. Here is a summary of what I learned about rabbits and animals that are similar to them.

Some Basic Facts About Rabbits

Some rabbits are about the size of a big cat, but they can grow very large—as large as a small child. There are also pygmy rabbits that grow to as little as 24 cm in length and weigh less than a pound. The larger species can grow to 50 cm and weigh more than 4.5 kg.

Rabbits originated in Europe and Africa, but they are now found all over the world—with the exception of Asia and Antarctica. Wild rabbits tend to make their homes in various locations. They can be found in woods, forests, meadows, grasslands, deserts, tundra, and wetlands.

They create shelter by tunneling into the ground. These tunnel systems are called warrens, and they include rooms for sleeping and nesting. Rabbits build their homes with multiple entrances for a quick escape.

No safe room for them, but plenty of escape hatches.

Rabbits are herbivores, which means they have a plant-based diet and do not eat meat. Grass, clover, broccoli, and brussels sprouts are some of their favorite foods. They also eat seeds, roots, buds, and tree bark.

Rabbits are known for their insatiable sexual energy and appetite. They breed three to four times a year. This is one of the most magnificent displays of evolution at work.

The mating and breeding habits of rabbits are a function of their instinct to pass on their genes. Only 15 percent of baby rabbits make it to their first birthday. The only way to ensure that their species survives is to have more babies.

Indeed, rabbits grow up and arrive at sexual maturity fast. Three weeks after birth, a rabbit can care for itself. Within three months, it is ready to mate and have more rabbits.

Here are some of the animals that are most similar to rabbits:

This hare is found in Africa. They are similar to rabbits in that they have long ears, big eyes, and fluffy tails. The hare is also a strict vegetarian.

However, the African Savanna hare is much larger than a regular rabbit.  They are also quite sociable. They live in groups called warrens.

A warren can have up to 50 hares in it, and they all stay together for life. 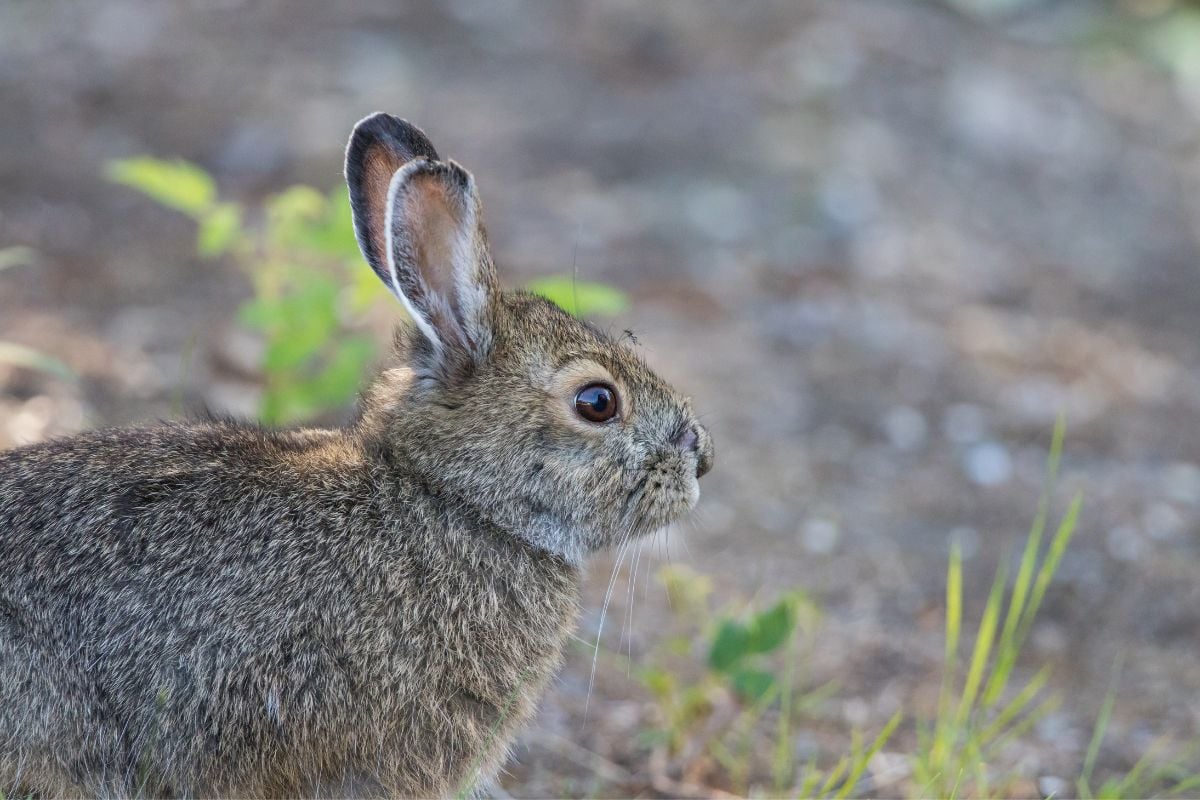 This animal is similar in appearance to the rabbit. Strangely enough, it is actually a member of the deer family. The Alaskan hare is larger than a regular rabbit and has longer legs.

Its fur is also darker in color. The Alaskan hare does not like people. It is a shy animal that is most active at night. 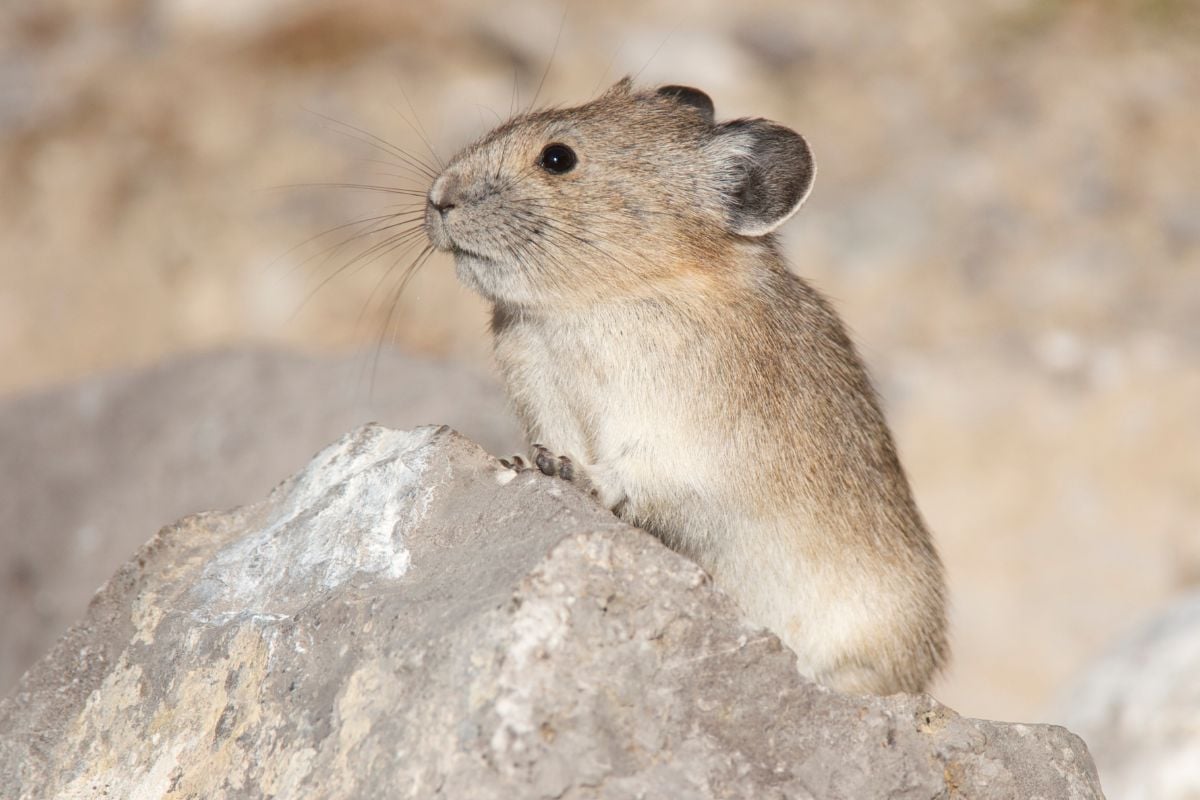 This is a small rabbit-like mammal that is found in the mountains of western North America. They are generally brown or grey in color, and they eat plants and small insects. 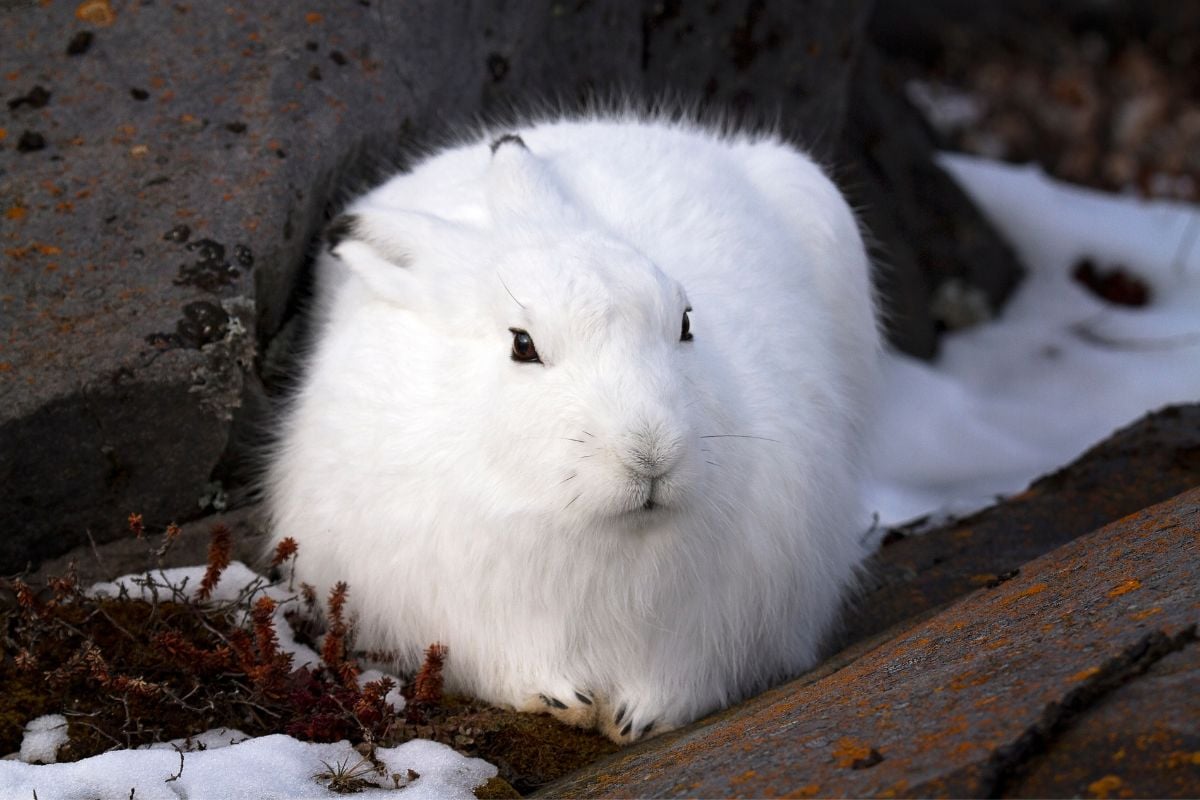 This rabbit-like creature is found in the Arctic tundra, where it is well-adapted to the rigors of its environment. These hares have thick fur that keeps them warm. They are also good at digging liveable burrows for themselves.

The most noticeable feature of this hare is it’s white, which helps it blend in with its surroundings and out of the eyesight of predators. This hare is also fast. It can reach speeds of up to 40 mph.

Like rabbits, this African hare has long ears and reddish-brown fur. It keeps away from other animals, including humans. The Broom hare is active mostly at night when it forages for food.

During the day, it hides in its burrow to avoid predators. 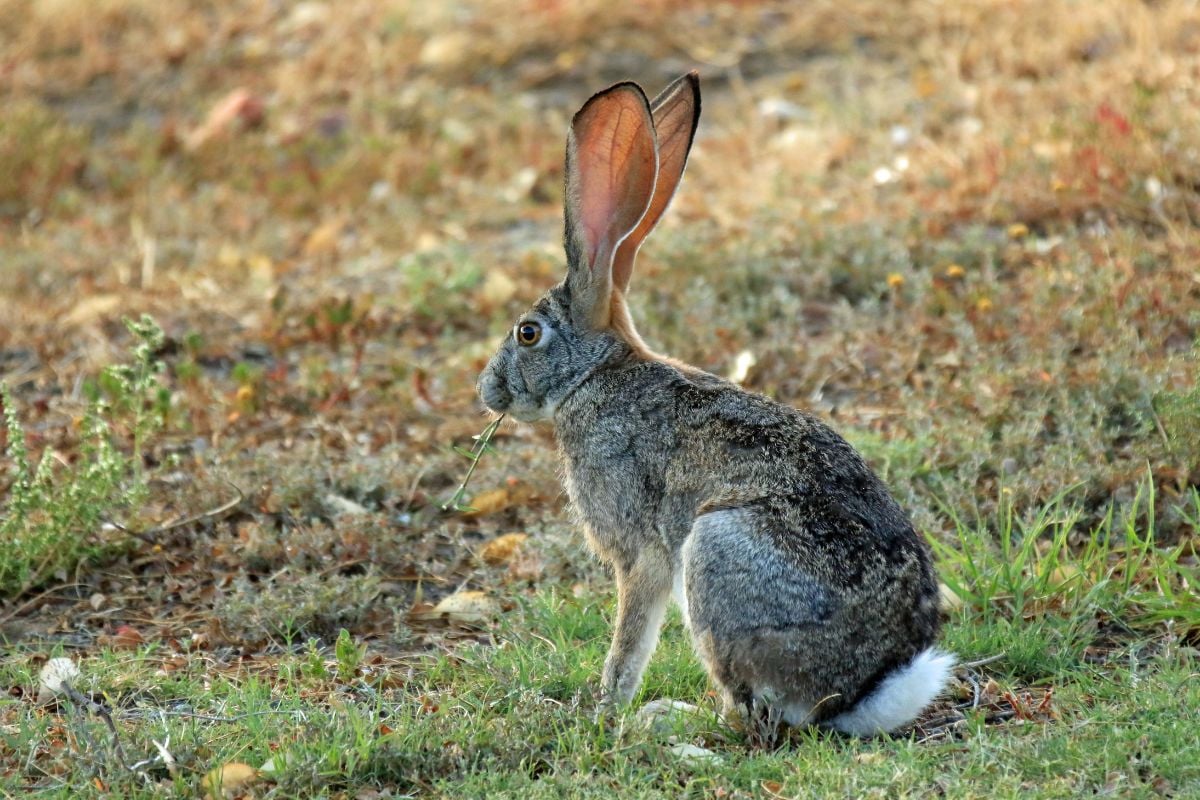 This creature has long ears, big eyes, and a fluffy tail, just like a rabbit. However, the average weight of a Cape hare is 7 pounds, which is larger than regular rabbits. This hare is an excellent swimmer.

It has been known to dive underwater to escape predators. 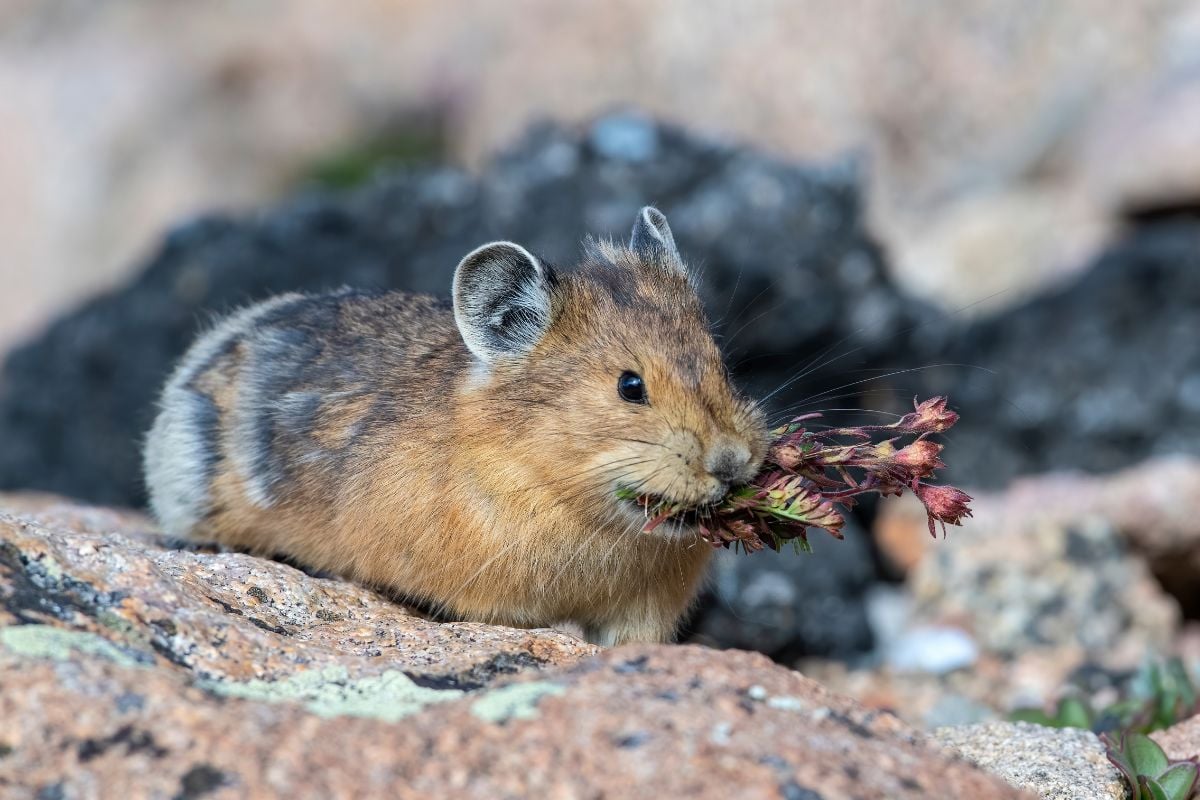 This small mammal has a body shape similar to that of a rabbit, with short legs and large ears but no tail. One of the biggest differences between this hare and the rabbit is that it does not hop; it walks or runs instead. This is owing to the fact that the Collared Pika lives in rocky areas where it is very difficult to hop.

It has brown fur with white spots and is slightly larger than a regular rabbit. The Corsican hare is also known to be quite aggressive when threatened. It is active at night, and hides in burrows and under brushes during the day. 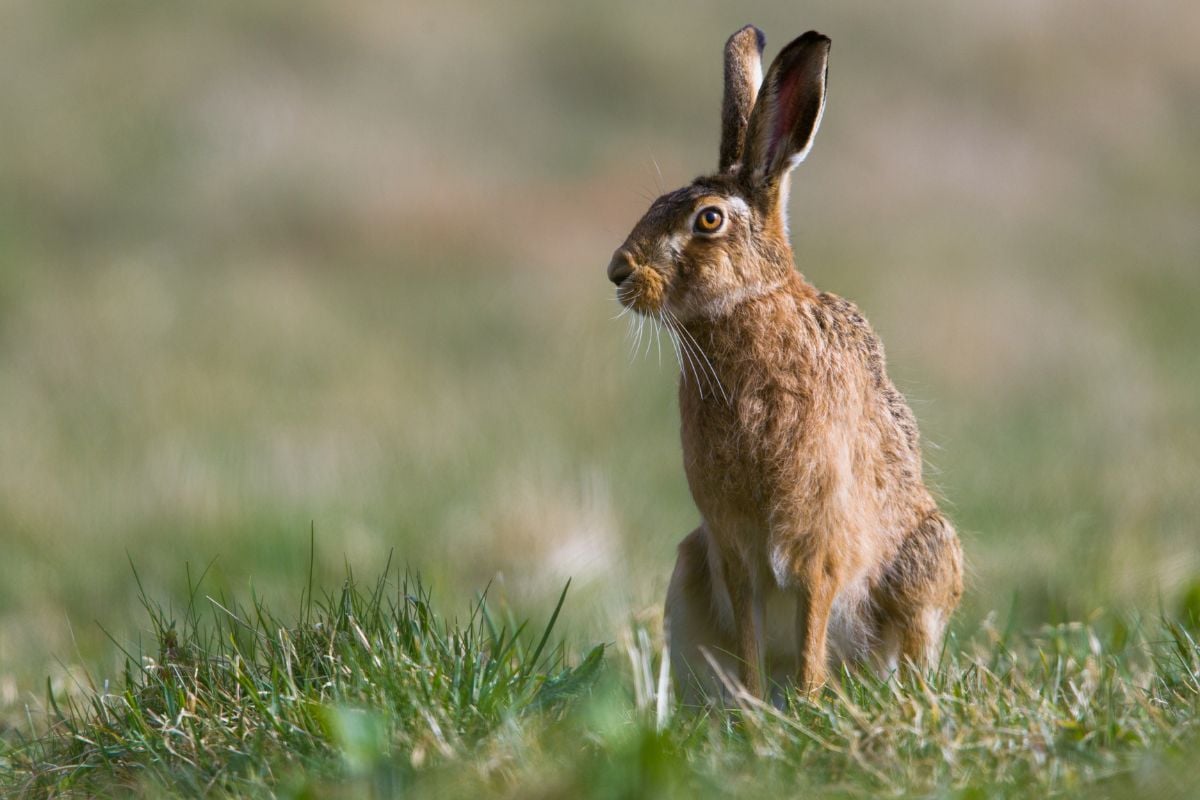 These hares are larger than rabbits. They also have longer hind legs which help them run faster. Their fur is typically brown or grey, which differs from the reddish or brown fur of the typical rabbit. 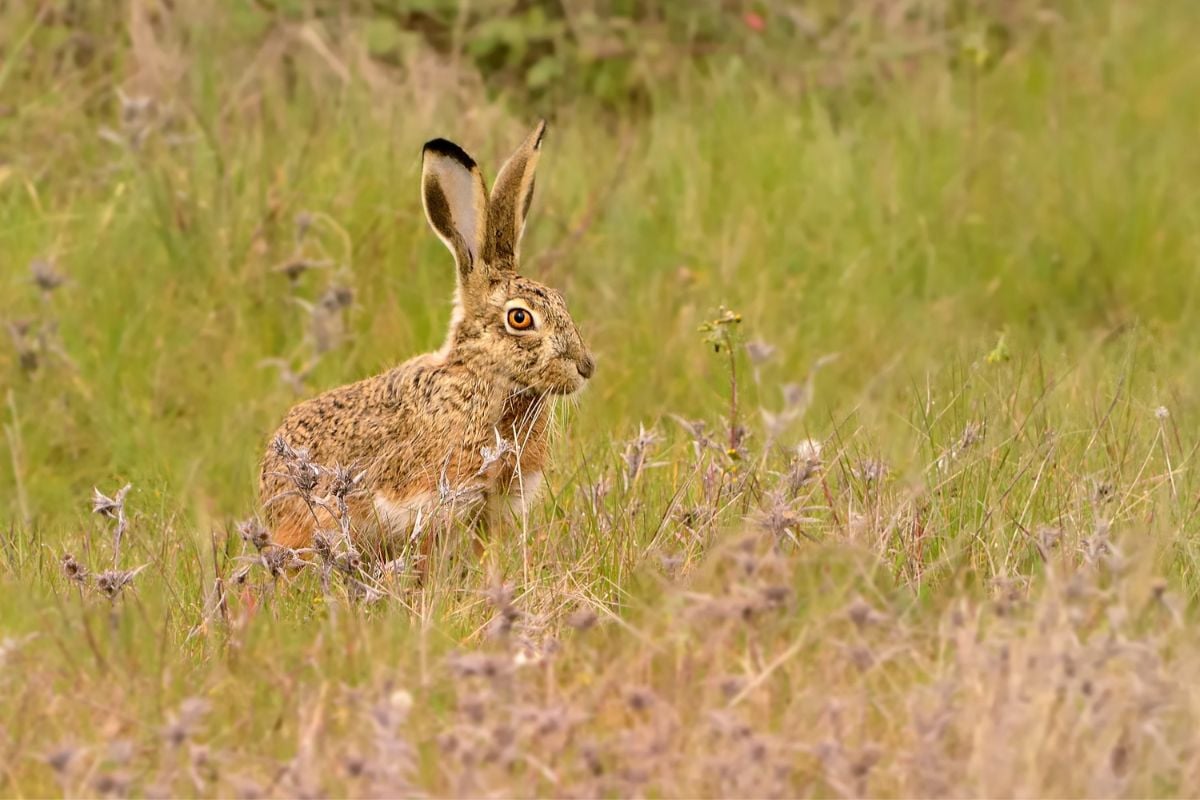 This species of the hare is found in the Sierra Nevada mountains of Spain. These hares are brown in color and have long ears like rabbits. They tend to shy away from contact with other animals. 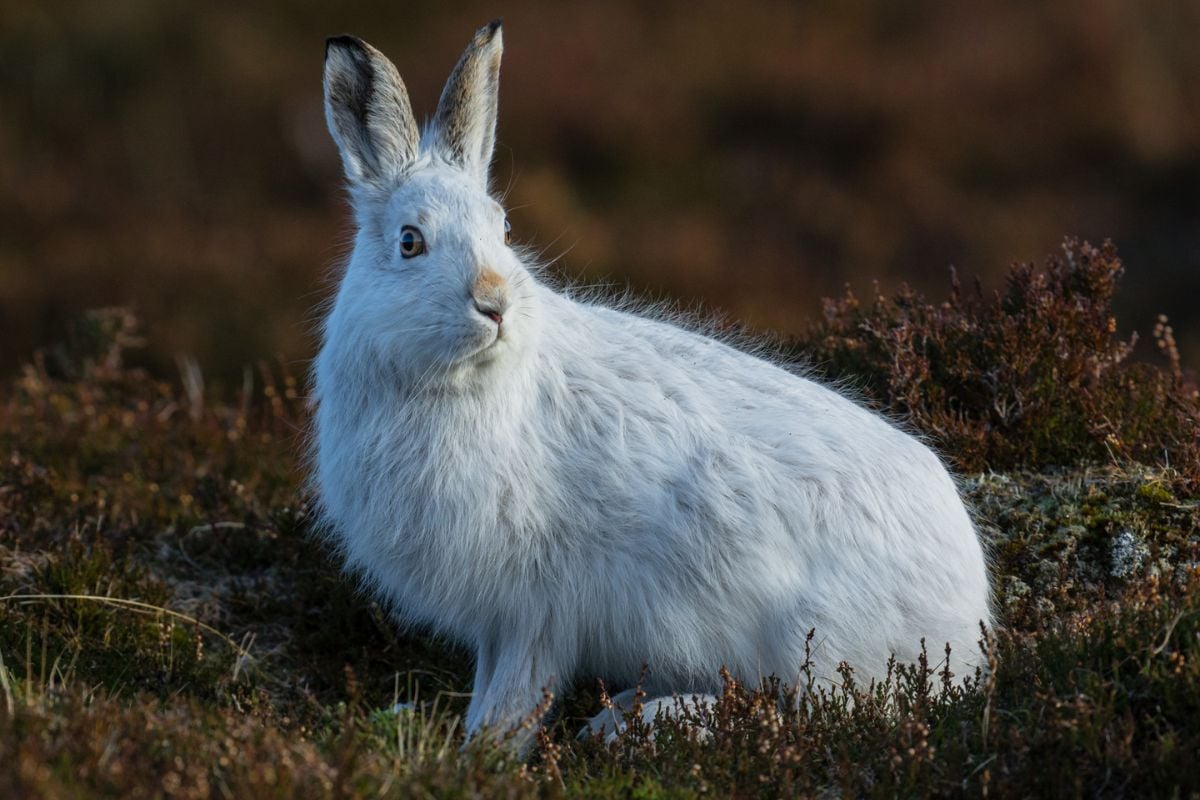 These hares are found in the mountainous regions of Europe, Asia, and North Africa. They have long hind legs that help them escape predators and thick fur that keeps them warm in cold climates. Mountain hares are much larger than rabbits.

Their fur color is also different, being white, brown, or black. 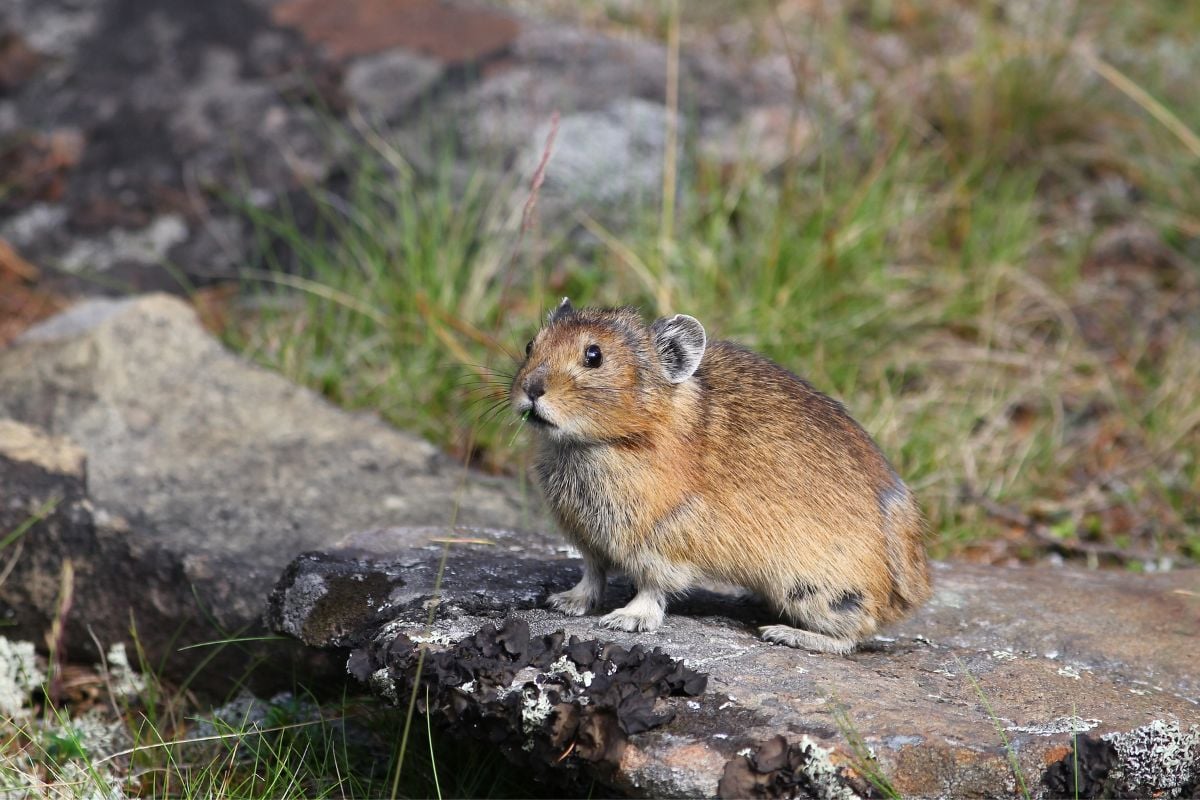 These animals are found in the mountains of Asia and North America. They are similar in appearance to rabbits in their small body size, round ears, and short legs. But the pikas do not have tails, and their fur is much thicker than that of rabbits.

They have long ears, big eyes, and furry bodies like rabbits. But genetically, they are more closely related to hamsters and gerbils. These pikas eat mainly grass and other plants.

They live in burrows and mate in springtime. 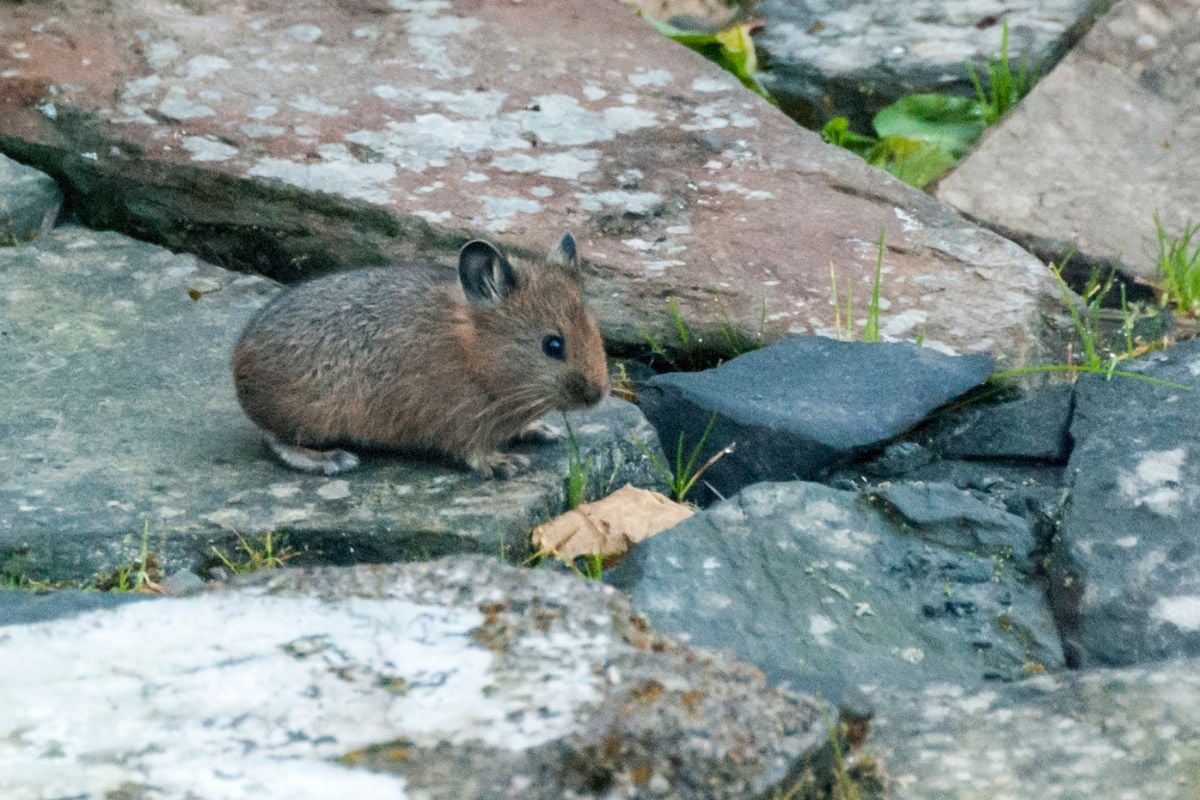 These animals grow to be only 8 to 10 inches long. They have brown fur and a white underbelly. Their diet consists mostly of grass and other types of plants. 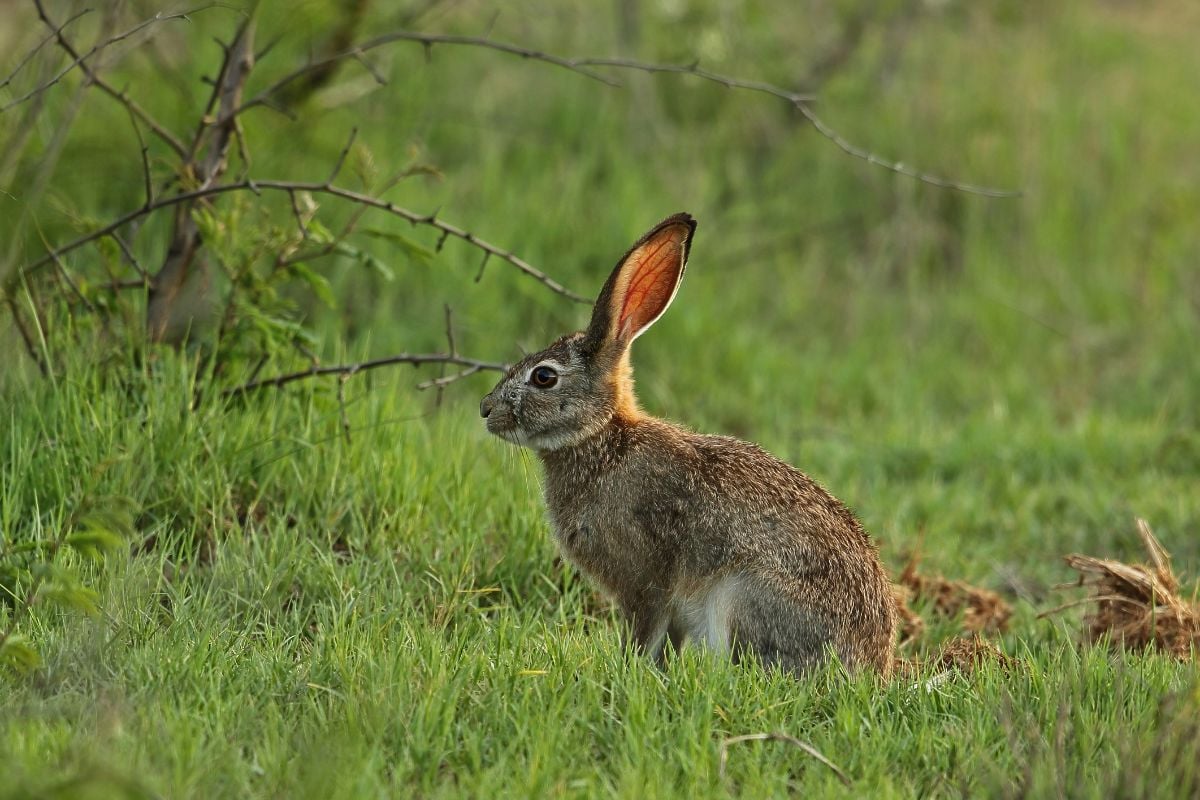 This hare species is found in Africa. It has long ears, big eyes, and a fluffy tail. Scrub hares have much bigger feet than rabbits, which helps them travel long distances quickly. 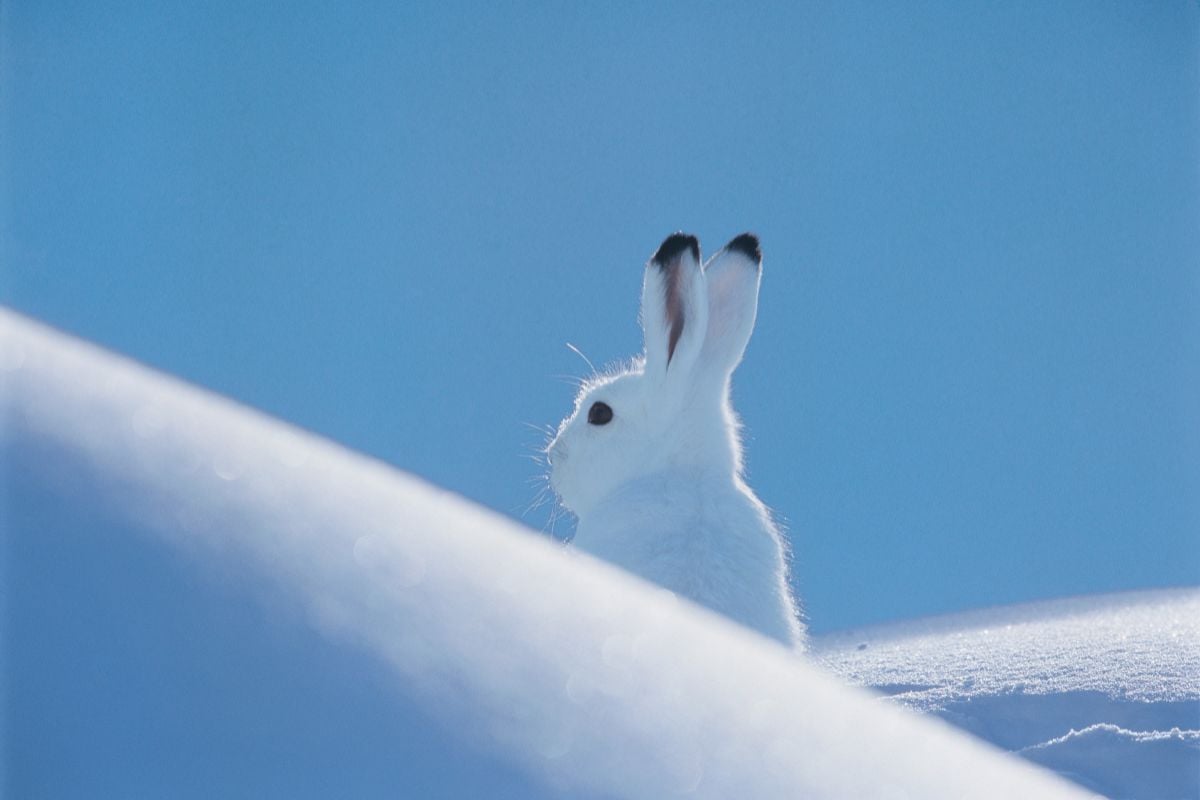 This hare gets its name from its large and furry feet. The latter helps the hare move through deep snow. This hare also has long ears, big eyes, and a fluffy tail.

However, the Snowshoe hare is larger than a regular rabbit, and its coat of fur changes color with changes in season. 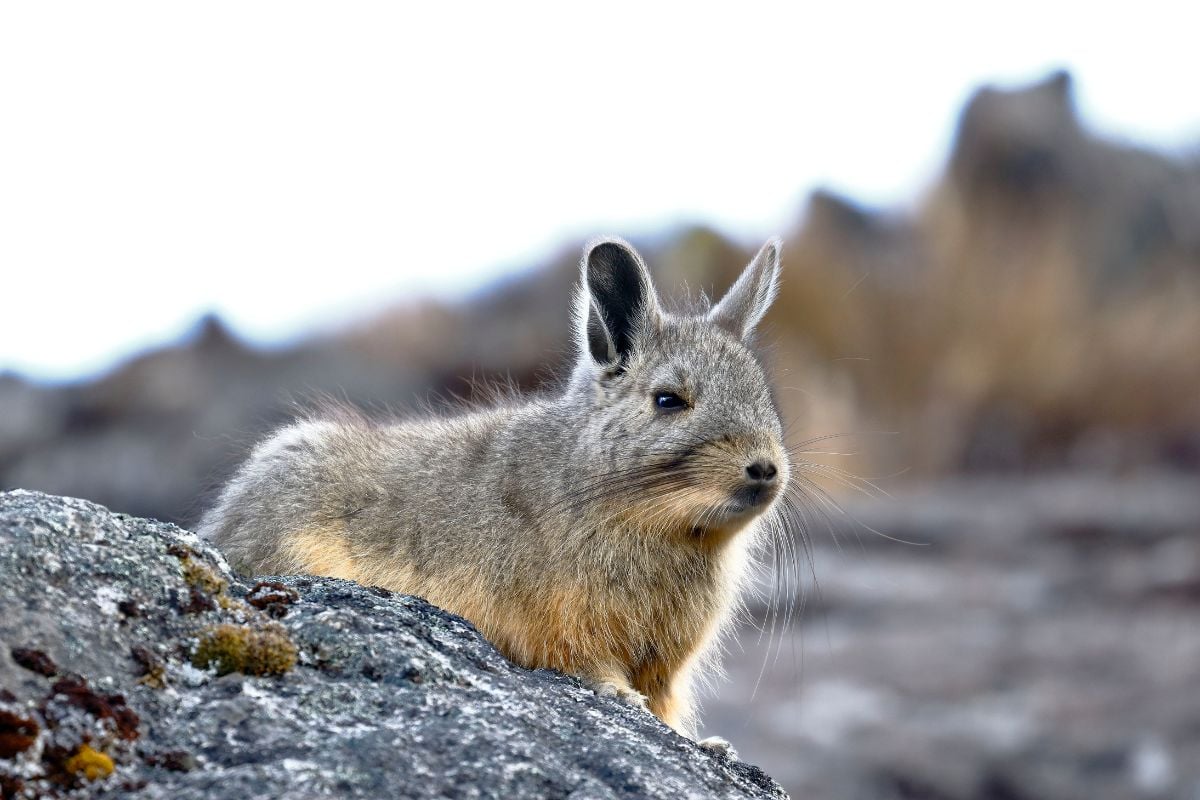 This is actually a kind of rodent that is native to South America. However, it has long ears, big eyes, and a fluffy tail, just like a rabbit. The Viscacha is also much larger than a regular rabbit, in that it can measure up to 3 feet in length.

How long do rabbits live?

This all depends on where they live. Rabbits that are in the wild are prey to numerous predators. Just about every large carnivore (including humans) likes to feast on rabbit meat.

That is why rabbits in the wild tend to live no longer than a year. Rabbits in captivity can live up to 12 years. Any rabbit that is well-looked after, as a pet or in a zoo, can live quite a number of years.

Rabbits are some of the most sociable creatures in nature. Even in the wild, they tend to make life-long commitments to each other. A pair of rabbits will give each other essential companionship and warmth during the winter.

They will even help clean and groom each other.

Do rabbit teeth ever stop growing?

No. They continue to grow throughout their lives. That is why they eat mostly grass and hay, which helps wear down the teeth to normal size.

Bugs Bunny is a famous cartoon rabbit who was always eating carrots. Many people are surprised to learn that this vegetable is actually not a mainstay of the rabbit diet. Carrots are too high in sugar for rabbits.

Do rabbits drink a lot?

Yes. Rabbits need a constant supply of water. A rabbit that weighs 2 pounds will drink as much water in a day as a dog that weighs 10 pounds. In the wild, rabbits often nest near an easily accessible water supply.

If you keep a rabbit as a pet, then you should keep it hydrated with a water bowl. It is much easier for a rabbit to drink from a bowl than from a bottle.

Do rabbits get happy?

Yes. And they can actually express it. When a rabbit is happy, they make an expression called binky. This is when a rabbit jumps into the air and twists its head and body in the opposite direction.

There is also such a thing as a half-binky, which consists of a quick flick of the head and ears. A binky is a rabbit’s way of expressing happiness and of being playful.

Do rabbits get anxious?

All mammals are able to experience fear and a sense of danger. But for a long time, it was thought that only humans can experience emotions related to worry and anxiety. This view is no longer valid.

Recent research our mammal cousins can experience what we would call worry or anxiety. Rabbits show it through their body language, which is much more subtle than once thought. When a rabbit is anxious, it will clinch the position of its body.

This is noticeable only if you are looking for it. Rabbit anxiety can be the result of disease or infection. If you have a pet rabbit that displays this kind of behavior, you may want to get it checked out by a qualified vet.