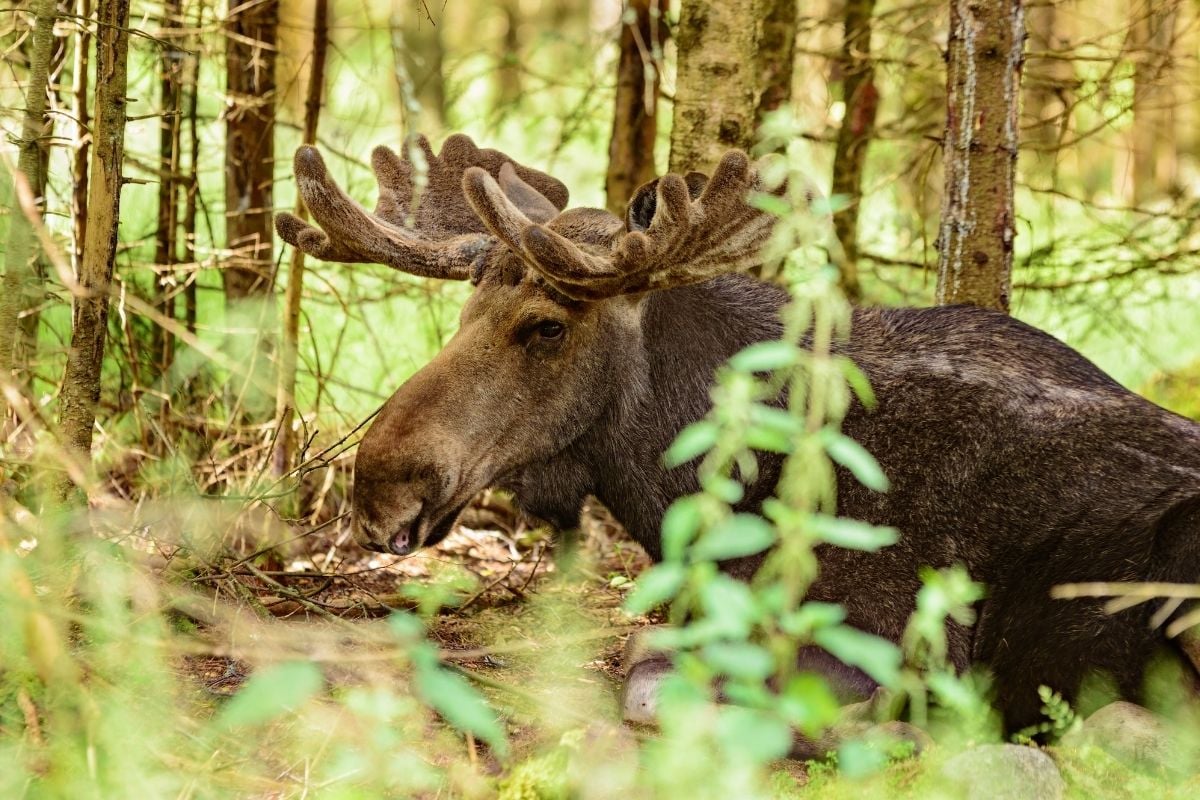 Have you ever seen a moose up close, in the wild? I have just once, and it was majestic. It was the turn of the season in the rocky mountains of Utah, when spring was finally coming to life.

We decided to take a drive through a popular loop in the mountains. We came to one particularly windy part of the road and noticed everyone slowing down, so we did too. As we drove by, we saw it just minding his business, grazing the fresh grass.

I couldn’t believe how big it was! I realize not many people have been so lucky to see one in the wild (since not everyone lives near the regions in which they roam). You may be surprised to know there are eight types of moose recognized in the world.

They primarily reside in North America and Eurasia, with there being four subspecies in each continental region. They were also introduced to the islands of Anticosti Island (in the Gulf of Saint Lawrence) and New Zealand. There has not been a moose sighted in New Zealand since 1952.

Moose have been roaming our planet since practically the dawn of time. The earliest species of moose date back to 2 million years ago, during the Pliocene epoch. Adult moose weigh anywhere from 800 lbs to 1,600 lbs.

Keep reading for a more detailed breakdown of each type of moose.

Contents show
1. Alaskan Moose
2. Northwestern Moose
3. Eastern Moose
4. Shiras (Yellowstone) Moose
5. Eurasian Moose
6. Siberian Moose (Yakut, Ussuri, and Kolyma)
FAQs
What do I do if I encounter a moose?
What is the gestation period?
Are moose going extinct?
Can moose swim?
Do moose hibernate?
Do moose shed their antlers? 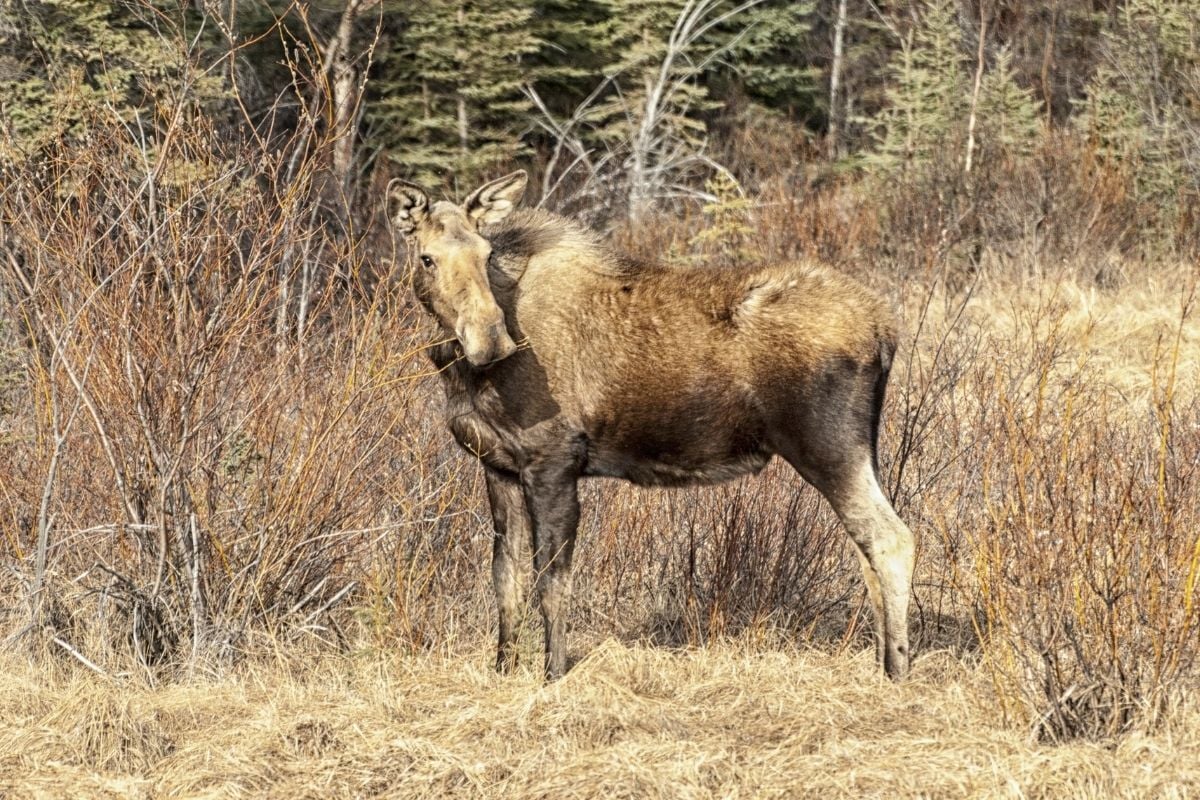 The Alaskan Moose (Alces alces gigas, or “Yukon Moose” in Canada) is the largest subspecies. It can be found throughout Alaska and parts of the western Yukon in Canada. Male Alaskan moose grow to be 6 feet tall and weigh up to 1,600 pounds.

There are approximately 225,000 of this type of moose. Alaskan moose graze on vegetation and shoots from trees like willow and birch. They do not have upper front teeth so they rely on their 8 sharp incisors on their lower jaw to chew up rougher, woodier vegetation.

They require daily consumption of 9,770 kilocalories––think of how many milkshakes that divides out to! When a baby Alaskan moose reaches 10 or 11 months of age, it leaves its mother to fend for itself. Similar to other subspecies, it can live for up to 16 years in the wild.

Alaskan moose are hunted by humans, wolves, and black and brown bears. They are most likely to be found in forests, and are more densely concentrated near large rivers in Alaska (such as the Yukon and Stikine). They sleep standing or sitting, similar to horses.

It is usually a solitary, nomadic animal but will sometimes form small herds.

The Northwestern Moose is a bit smaller than the Alaskan moose. It’s found throughout southeastern Alaska, western Canada, and even in northern parts of Minnesota, North Dakota, Wisconsin, and Michigan. It is more populous than the Alaskan moose, with experts estimating around 380,000 in the wild.

Northwestern moose graze on regional vegetation, including aquatic plants like pondweed and lilies. They can also consume up to 9,770 kilocalories (71 lbs) per day. Can you imagine eating 71 pounds of food per day?!

Northwestern moose (as adults) are fairly antisocial, as they only come into contact with other moose when battling for a mate. At 10 or 11 months, yearlings are actually chased off by their mothers to fend for themselves. In Minnesota specifically, their preferred habitat is found in areas that contain mixed transitional forests (boreal forests), meaning they are a mix of wetlands and shrublands with confers and hardwoods.

A subspecies of the Northwestern moose, the Eastern moose is similar in size. It ranges in eastern Canada, from the great lakes in Nova Scotia to Ontario. There is a small population (30,000) in Maine, with some expansion into Connecticut and Massachusetts.

This subspecies is characterized by a mahogany brown color. There are about 350,000 of them, with ¾ of the population mating each fall and winter. Eastern moose eat vegetation and shoots from willow and birch trees.

It also eats lilies and pondweed (like the Northwestern moose) during the spring and summer. Eastern moose, similar to other subspecies, prefer to feed on leaves, shrubs, bark, and twigs from trees because it does not require them to bend their necks down. You can imagine how uncomfortable this would be if you were nearly 6 feet tall! They can store over 100 pounds of food in their stomachs.

They sleep in beds of flat vegetation, or depressions in the snow. Female moose without calves are generally peaceful towards humans, but male moose who are mating will attack if threatened. They are nomadic and do not socialize. 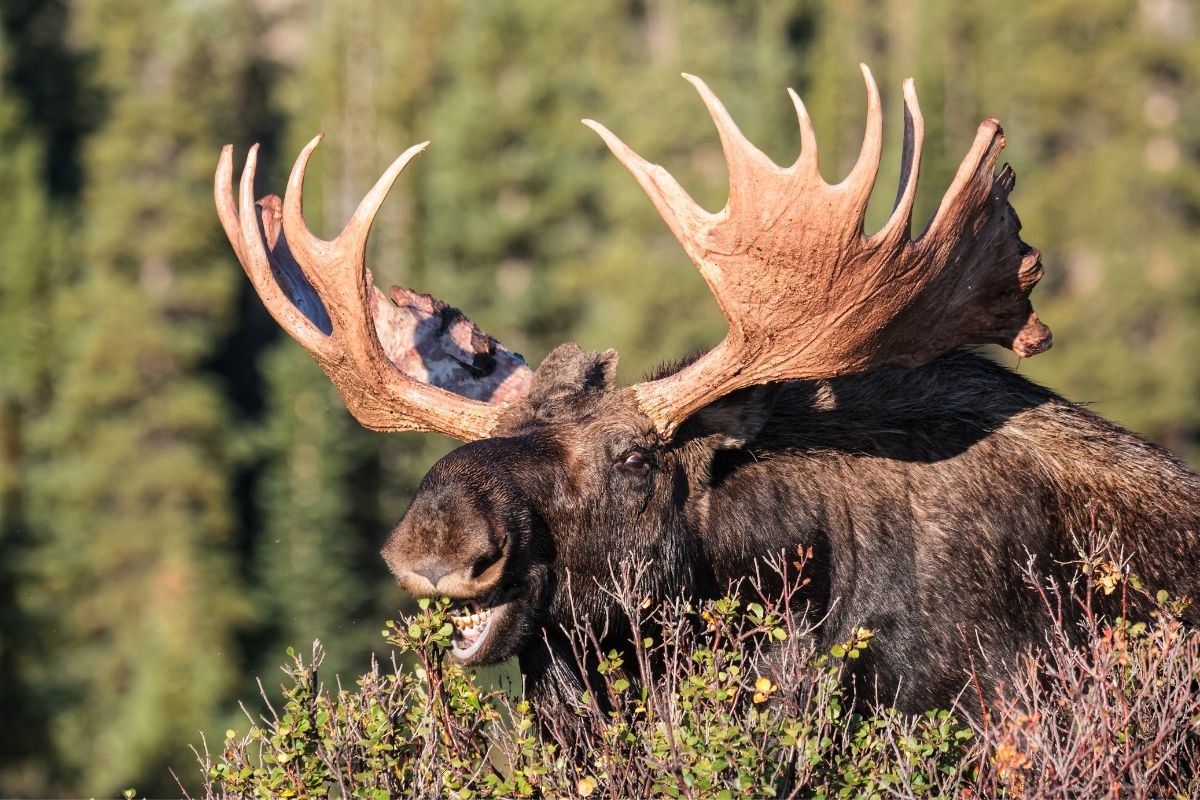 The Shiras moose (aka Yellowstone or Wyoming moose) is the smallest subspecies of moose found in North America. I am guessing this is the subspecies I saw in Utah! There are about 25,000 of them that range in the Rocky Mountain states of Wyoming, Idaho, Montana, Utah, Colorado, and the Canadian provinces of Columbia and Alberta.

These moose are better adapted to surviving in the snow. In the summer, it survives on vegetation like water lilies, duckweed, and burweed, but otherwise eats the leaves and twigs of willow trees, as well as gooseberry and buffaloberry. On occasion in the winter (if they can find it) they will also eat subalpine fir.

Because it is smaller than other moose, it consumes 10-12 pounds of food per day. Its typical lifespan is 10 to 12 years. When it’s asleep, while its head and neck are relaxed, its ears are always alert for any potential danger or threats. It will sleep just about anywhere that is comfortable. 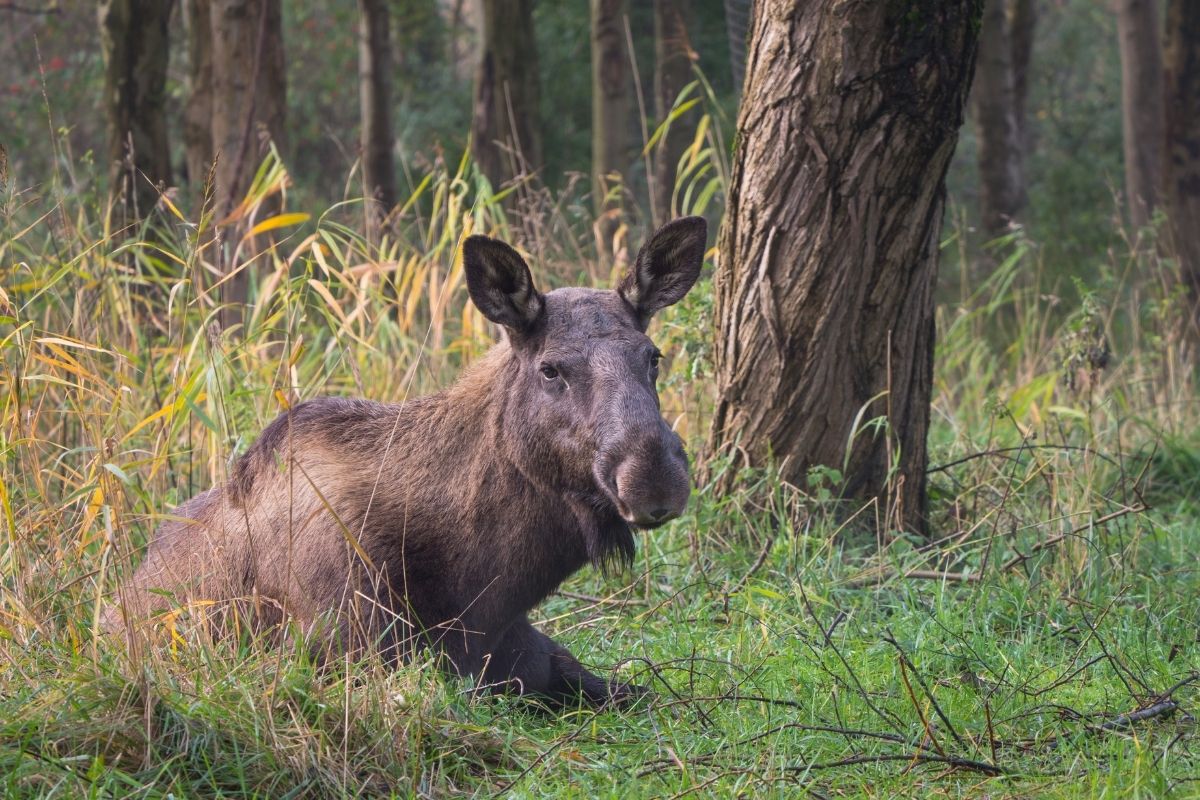 There is some debate as to whether the Eurasian moose is a moose or an elk, which is why you may see it referred to as the Eurasian or European elk. There are 2 million of them across northern parts of Europe and Asia (from Siberia to Finland and Norway). There are a few subspecies of Eurasian moose which I have included below, so be sure to keep reading!

Like its North American relative, the Eurasian moose is an herbivore that eats both terrestrial and aquatic vegetation. During the winter months it survives on shrubs and buds from Pine trees. These moose live up to 25 years, but because of hunting and animal predators, they usually only survive to be 10 years old.

They prefer habitats of higher altitudes that include wetlands, forests, and grasslands. They intentionally avoid areas with steep slopes and human activity. They are true introverts to their core!

See also  How Big Do Honey Badgers Get? How Much Do They Weigh?

While these moose all reside in different parts of Siberia, they all have similar dietary habits, eating primarily vegetation and aquatic vegetation if available. Next to the Alaskan moose, Siberian moose are the largest in size, measuring up to 7 feet tall at the shoulder. According to one study from the University of Wisconsin, populations of Siberian moose are highest in European Russia (west of the Ural mountains).

This may be partially why there is a budding tourist economy for guided hunts in parts of Russia for hunting enthusiasts. Like the European moose, Siberian moose prefer higher altitude habitats and will sleep both standing and sitting.

While much of the eating, social, and sleep patterns of moose are the same across different subspecies, there may still be questions you “moost” want to ask. I’ve provided answers to some of the most commonly asked questions and I hope you find this as insightful as I do!

What do I do if I encounter a moose?

Moose in general are less dangerous than bears. Moose will be more aggressive in the fall (late September/October) due to mating season. As I mentioned before, female moose (she won’t have as prominent of antlers as a male) without a calf are likely going to be peaceful.

If you see a calf on its own, be very careful because the mother may be near by, although unseen. If an aggravated moose sees you, it may start stomping and kicking in place. Do not move or try to get up. Instead, curl into a ball and cover your head with your hands.

It will likely flee, but if it does charge, run and get behind something solid.

What is the gestation period?

A female moose generally begins breeding at 28 months but can start as early as 16 months. She will conceive in the fall and birth between mid-May to early June. This means her gestation period is about 230 days (about 8 months).

The conservation status of moose is currently “least concern” which means that the population is stable and increasing. This is encouraging, as both North American and Eurasian moose are harvested annually. There are, however, certain areas where moose are rarer or going more extinct than others.

In Minnesota, for example, moose populations are very small, with only 4,000 moose surviving there. Just two years ago, United States wildlife officials denied a request to place moose under endangered species protection. 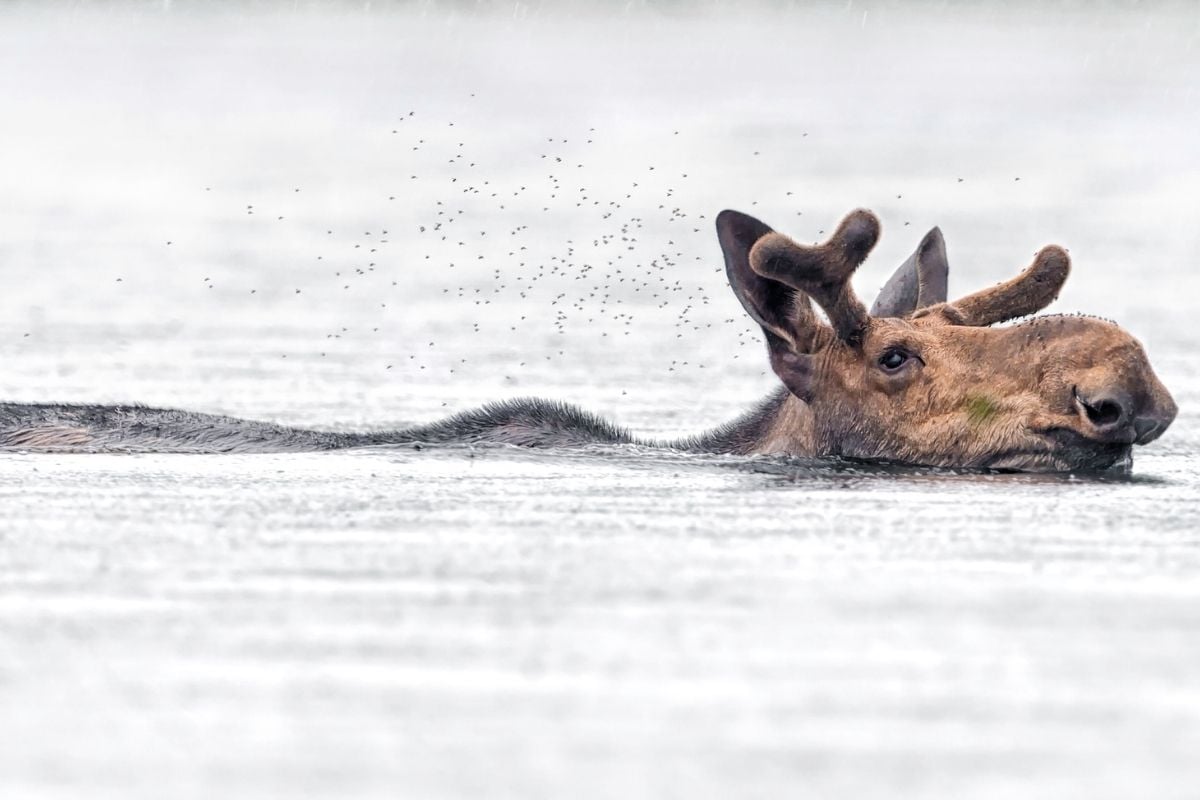 Despite their gargantuan size and stature, moose are very comfortable in the water. They are good swimmers, and can even stay submerged for 30 seconds or more. Can you imagine being in a kayak or canoe and seeing a moose come up for air?

I would fall right in out of sheer panic! It makes sense that they can swim given their affinity for lilies and pondweed in the spring and summer months. Moose can swim as fast as six miles per hour (most humans can only swim two miles per hour) and will even use water as a way to outrun their predators.

Because of their large size, it is easy for them to stand still in a rushing river. A wolf, for example, would be quickly swept away. While moose can swim, they cannot dive.

See also  Which Animals Do Not Have a Heart?

Their thick fur coats make them incredibly buoyant and their hooves are less than ideal flippers for diving. As I mentioned, they can submerge themselves, but they cannot dive deep.

Moose do not hibernate, and they do not migrate. Unlike bears, they are able to find food all winter long. Their tall and muscular legs allow them to hike through snow up to 3 feet deep.

On a “warm” winter day, they may even lie in the snow to cool down! They are more likely to gather in small groups in the winter than in the spring or summer.

Do moose shed their antlers?

You may be surprised to learn that a moose’s antlers, like other deer relatives, are cyclical. This means that they begin growing in the spring, reach their peak in the fall, and then fall off their heads in the winter.  Who knew?!

At their peak, a moose’s antlers can grow up to 6 feet wide. The boost in testosterone causes a male moose’s antlers to stop growing, and they are shed during winter, right after mating season.