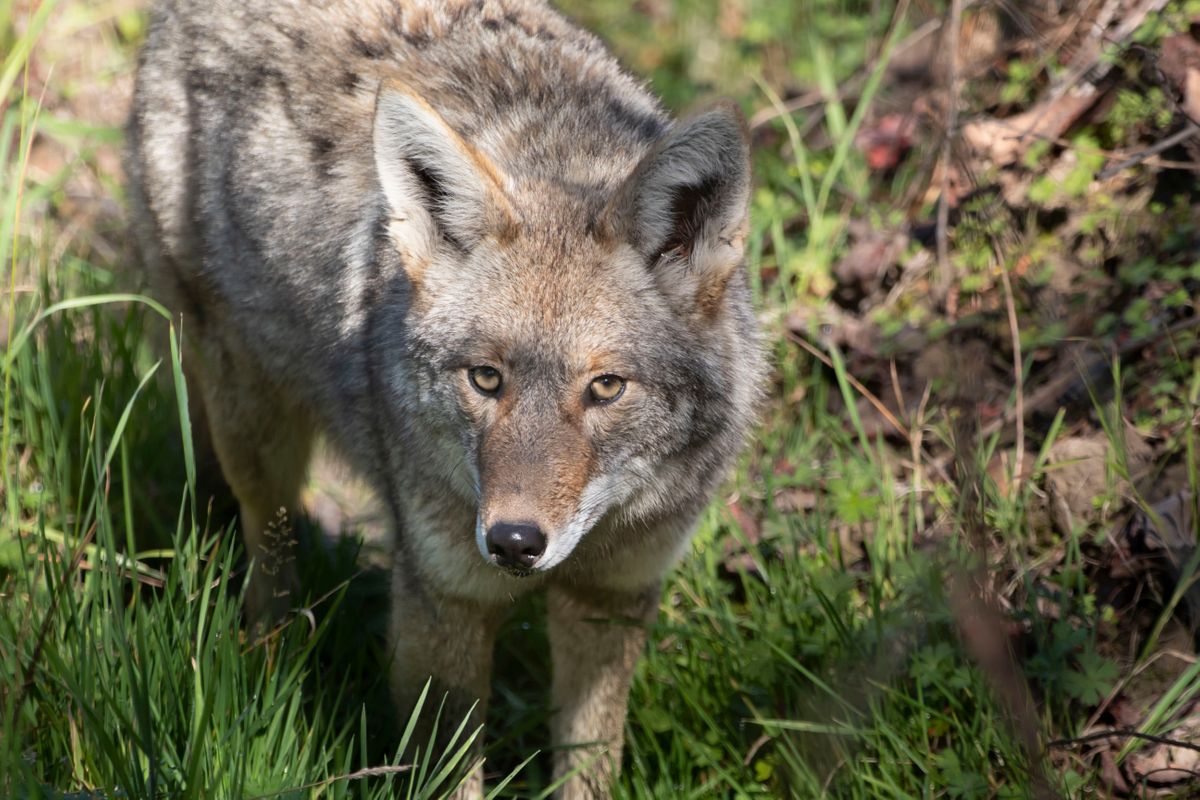 Have you ever heard the tell-tale sound of your trash being knocked over at night and thought, “those damn raccoons!” The chances are high that you’re correct. But have you ever wondered if it may be a coyote? Do they even raid trashcans?

And if they do, what other similarities, or differences, do they have with raccoons?

Although their classification and genetics are definitely at odds, are there any similarities between coyotes and raccoons in appearance, behavior, distribution, or ecology? And what happens if they meet in the wild?

Physical Features, Relatedness And Taxonomical Differences Between Coyotes And Raccoons 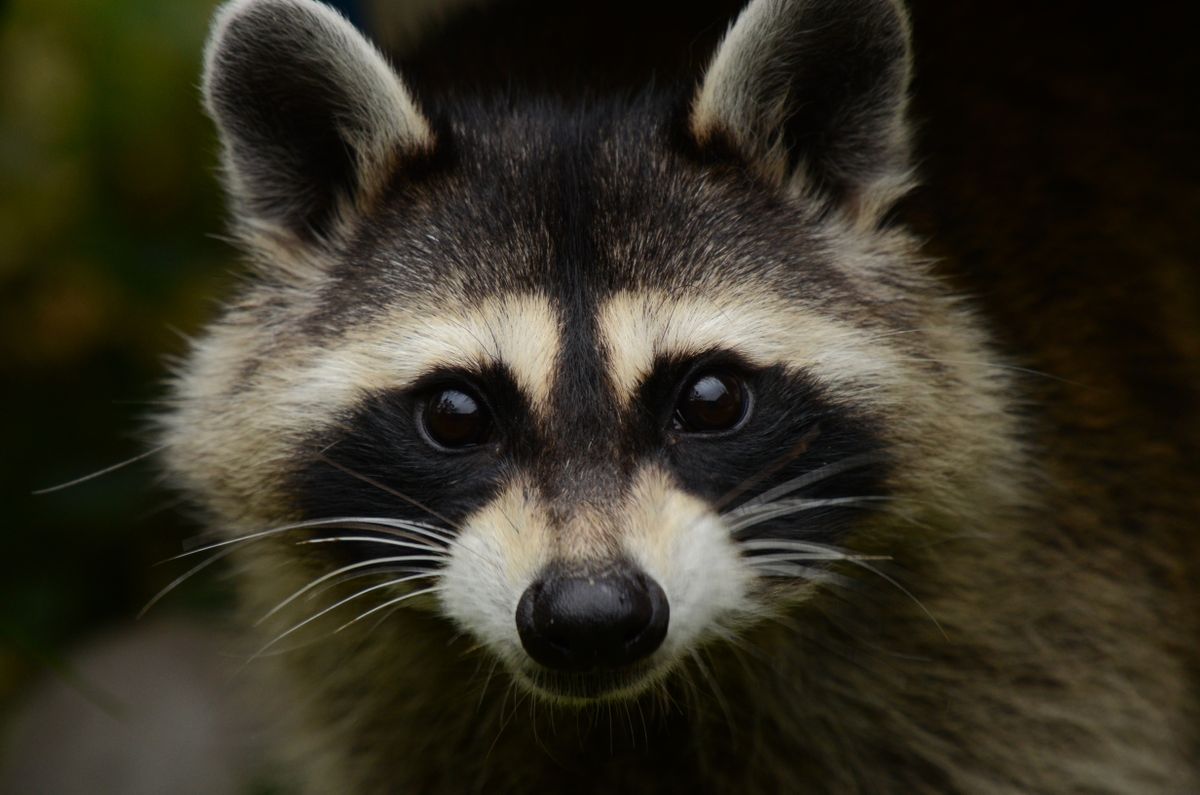 Taxonomy Of Coyotes And Raccoons

To better understand what an animal is and the differences between different animals, we need to look at how researchers have classified them.

The best starting point is through taxonomy, how an organism is related to other organisms.

Coyotes and raccoons are surprisingly close in relatedness. They both belong to the suborder “Caniformia,” meaning they are both “dog-like” in certain features.

Coyote and raccoons split at the family level, where coyotes are part of the dog family.

Raccoons are part of their own family, the “Procyonidae,” omnivores, small to medium in size, with medium to long tails and paws with five digits, which climb trees.

Both coyotes and raccoons have numerous subspecies (19 and seven respectively).

For that reason, we will be looking at coyotes in general and the more charismatic, Common, or North-American raccoon.

Ancestry And Family Trees Of Coyotes And Raccoons 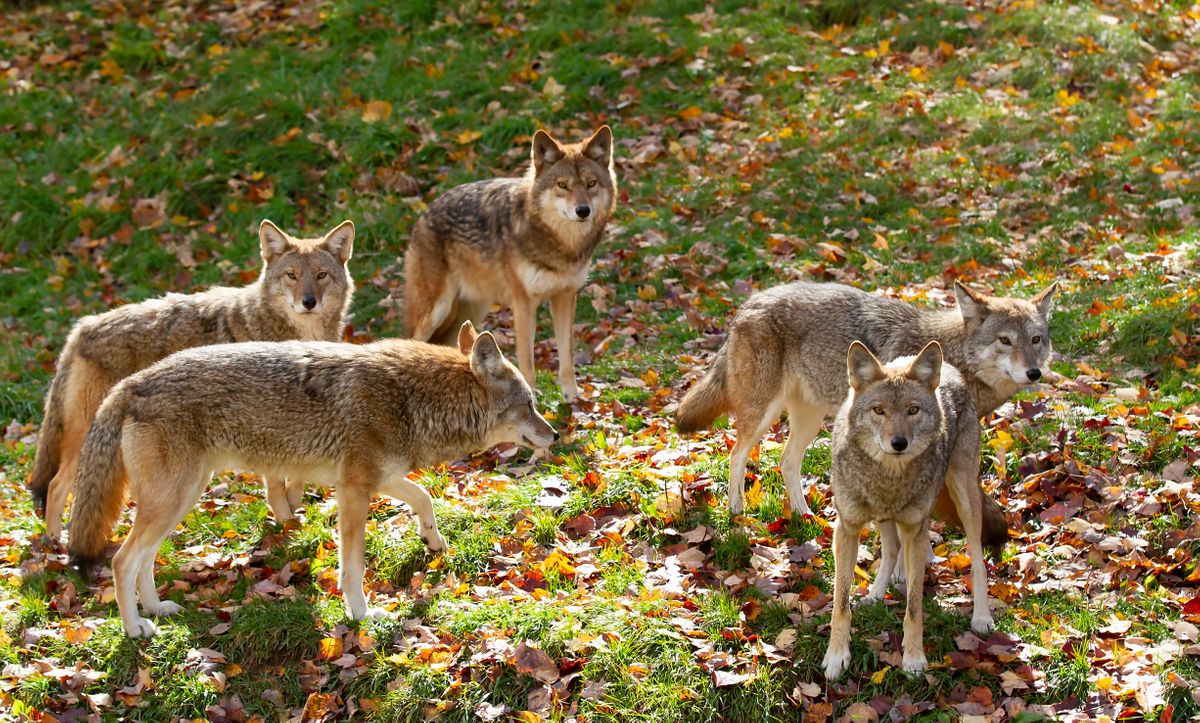 By looking for common ancestors, we can see how closely certain organisms are related, and by tracing the break, we can see where divergent evolution began to occur.

This allows us to start asking the “whys”!

Due to their incorporation into the Canidae, coyotes are very closely related to dogs and wolves. The split from their “cousins” came during the Pleistocene period.

Raccoons shared a common ancestor with coyotes up until the Eocene period. After this split, raccoons and bears continued sharing ancestors up until approximately 40 million years ago where they split again.

Raccoons and other mustelids then shared ancestors for a longer time before splitting as well.

Although they did have a common ancestor in the Miacids, coyotes and raccoons split relatively early (55.8–33.9 million years ago).

Anatomical Differences Between Coyotes And Raccoons 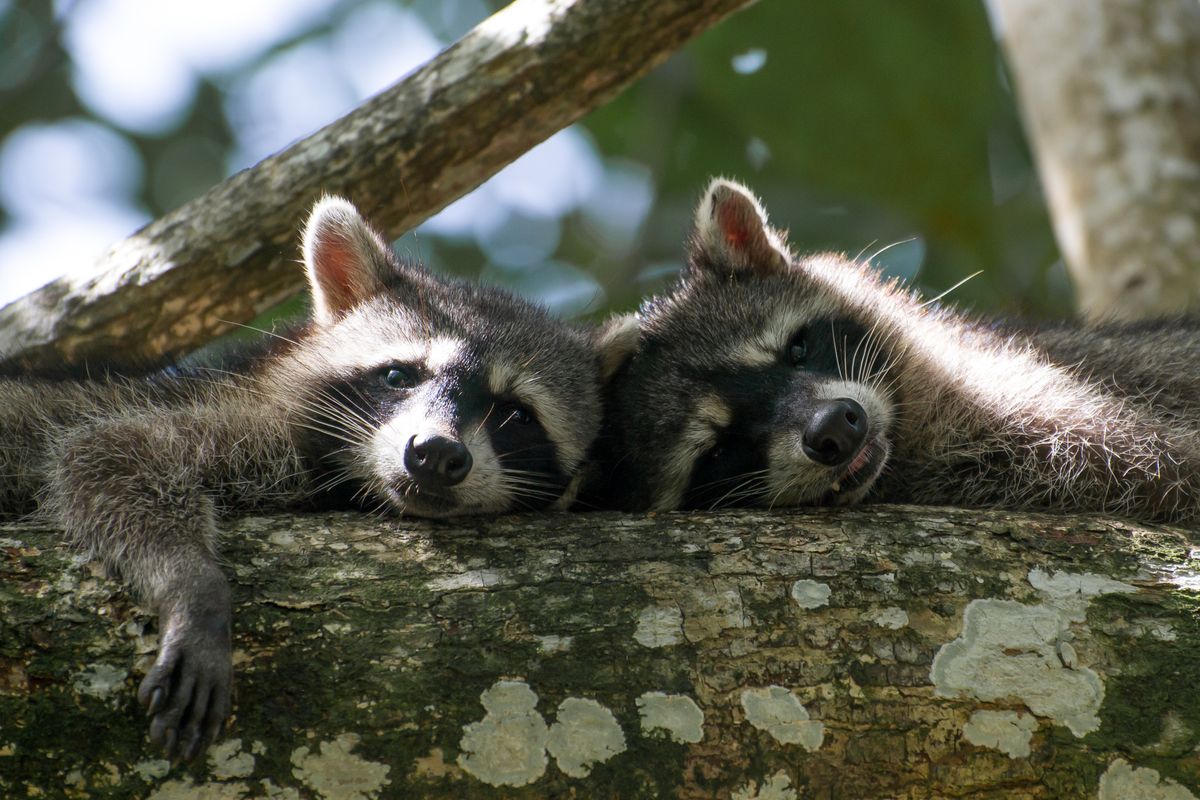 After looking at where they come from, the next logical step would be how they physically differ.

As both coyotes and raccoons fall under the “dog-like” sub-order, we should expect to see some similarities.

Below is a comparison of some of the features of coyotes and raccoons.

Although there are subspecies variations, they are grizzled gray or buff on the back, with black-tipped hairs on top.

Below is pale cream to grey with yellow hues. The face can be reddish-brown to grey. Coyotes have a bushy black-tipped tail.

Long and thick grey fur covers the body, with some brown or yellow mixed in. The face has the diagnostic “mask” of black over the eyes. The fluffy tail has five to seven black bands around it.

Hairless feet and hands, which have five digits and sharp claws.

Distribution, Habitat, Social And Ecological Differences Between Coyotes And Raccoons

We have looked at the various genetic and anatomical differences between coyotes and raccoons. Now we shall compare them in terms of distribution, habitat, social structure, and ecology.

Distribution And Habitat Difference Between Coyotes And Raccoons

An animal’s distribution is the range that it occurs across, while its habitat is the type of area in which you will find that animal (e.g., desert, plains, or forest).

Coyotes are widespread throughout the majority of North and Central America.

Although coyotes were located initially in plains, prairie, and desert habitats, they have spread into other habitats, including forests, grasslands, coastal areas, swamps, rural and urban areas.

When in urban areas, Coyotes will still seek out wooded areas in parks and on golf courses to hide from humans.

Raccoons are also widespread throughout most North America, from Canada extending down into Panama (Central America).

Raccoons are well-adapted omnivores and can utilize a vast range of different habitats. Forest, wetlands, cliffs, prairies, rural and urban areas are all frequented by raccoons.

Both coyotes and raccoons can adapt to a range of habitats. Their distribution is also similar.

Food, Feeding, And “Hunting” Differences Between Coyotes And Raccoons 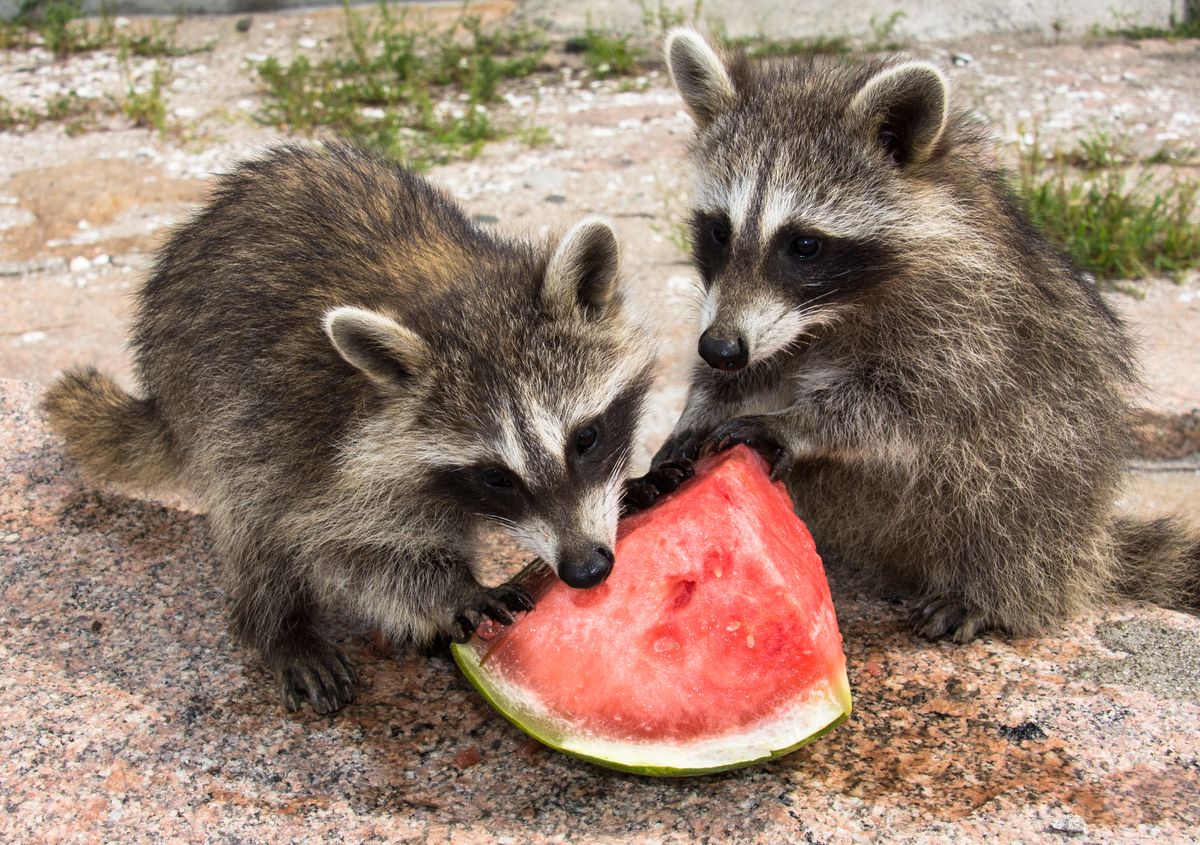 Although coyotes are carnivores and hunt/scavenge for their prey, a bulk of their diet is fruit.

Raccoons are renowned for their scavenging habits, winning them the nickname of “trash-panda.” They are, however, adept hunters as well.

Raccoons put their dexterous, almost human-like hands to good use. Food is grabbed by hand and delivered to the razor-sharp teeth.

Prey is caught using their sharp claws, and worms/insects are dug up from the ground.

Coyotes and raccoons are both able to utilize a wide range of food, which is to be expected when they occupy so many different habitats. The significant difference is that coyotes catch their prey as a dog would, whereas raccoons use their hands.

Breeding And Social Structure Of Coyotes And Raccoons 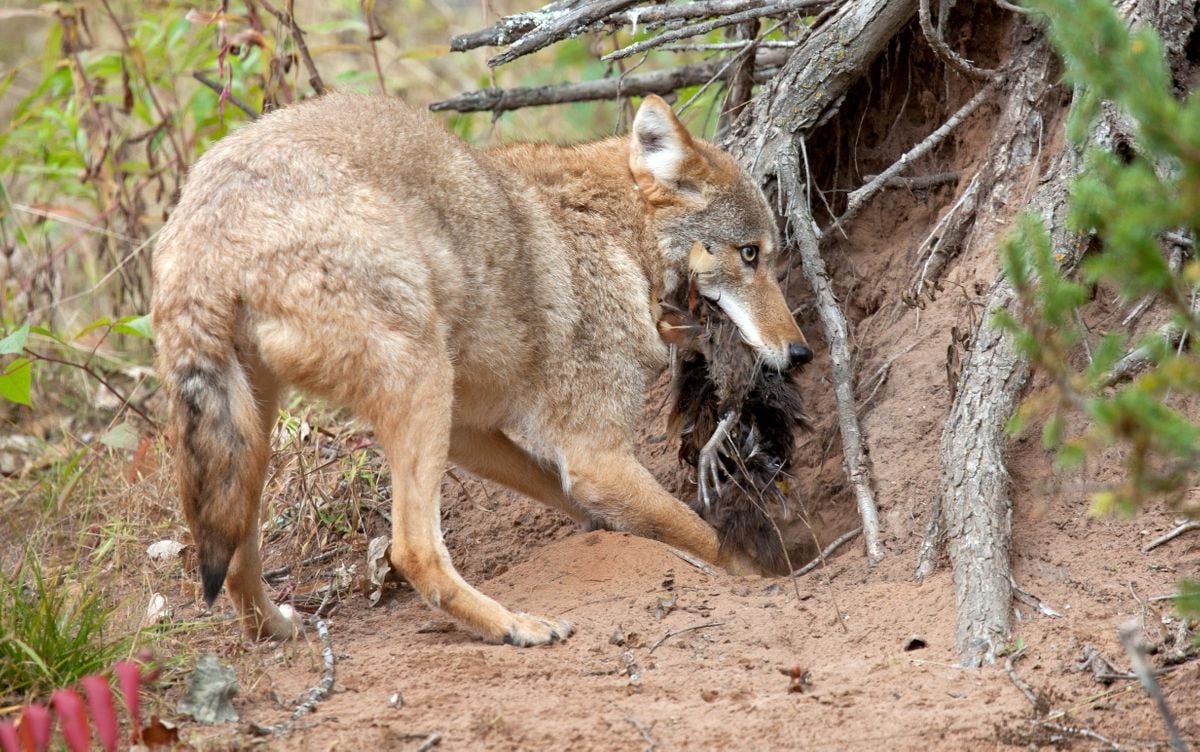 Coyotes mate between late December and March, and after 60-63 days of gestation, a litter of between four and seven pups are born. Both males and females provide care for the young.

Coyotes are monogamous and pair up for several years. Older pups will often remain in the pack, but some move on to form their own packs. Packs are lead by an alpha male and female.

Raccoons mate between January and March, and after 63 days of gestation, they can have between one and eight (three to four average) cubs.

Only the female cares for the young.

Females tend to be solitary in terms of the social structure, while males may form coalition groups of a dominant older male and younger subordinate males.

Although similar in many ecological elements, coyotes and raccoons differ in breeding and social structure. While coyotes are pack animals, raccoons are thought to be more solitary.

Coyotes are also generally more diurnal or crepuscular unless located around human areas, where they are more nocturnal. Raccoons are nocturnal.

Raccoons are, however, able to climb trees with their sharp claws and agile hands, while coyotes cannot.

Interactions Between Coyotes And Raccoons

Coyotes and raccoons occupy many of the same habitats, and both are spread similarly through the North American continent, so it goes without saying that they would encounter one another.

On such encounters, the reality is, coyotes catch and eat raccoons. Although raccoons have sharp claws and teeth, coyotes are bigger, heavier, and generally move in packs.

All of the raccoons’ adaptations will probably allow them to flee a confrontation situation. Coyotes, however, remain the victors in this fight.

Although there are some similarities in taxonomy, feeding, habitat, and distribution, there are many differences between a coyote and a raccoon, ranging from how they look to how they interact intra-specifically.

We know for a fact, though, that should they meat, a coyote will view a raccoon as a tasty snack.