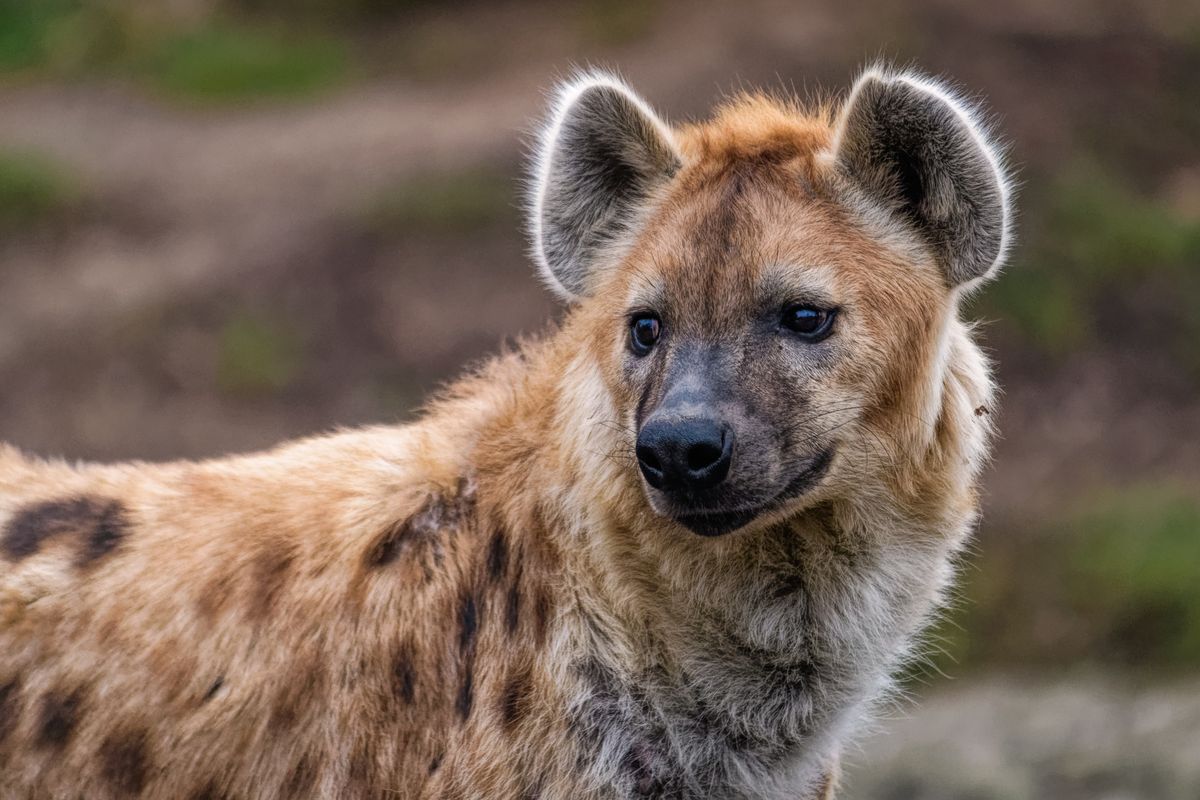 I’ll be honest; this question may have been misleading for me as well! That “versus” made me wonder if this should be a “death battle” scenario. Now, sorry to disappoint, but that’s not the focus of this blog.

Instead, we’ll take a look at the facilitating differences between coyotes and hyenas. But, if you are looking for a fight, read to the end; there may be a surprise waiting for you!

Coyotes and hyenas have many differences. Coyotes are similar to medium-sized dogs in size, appearance, and behavior; they are also closely related to dogs and wolves. Hyenas have similar behavior to dogs but are more closely related to cats, while mongoose and civets are their closest relatives.

Genetically speaking, the differences between coyotes and hyenas are vast. But do the differences stop there? Or are there other dividing lines, like habitat, food sources, and hunting strategies?

And with all that’s different, are there any similarities?

Anatomical, Phylogenetic And Classification Differences Between Coyotes And Hyenas 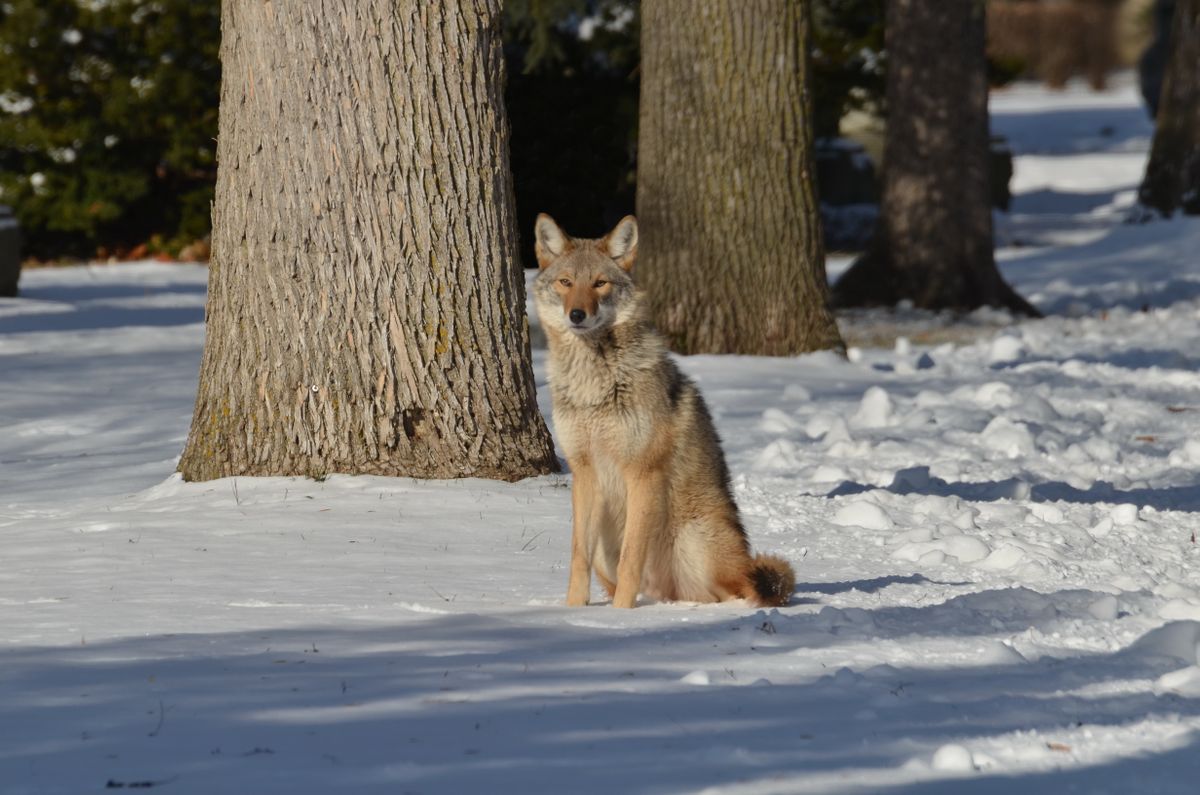 Taxonomy Of Coyotes And Hyenas

According to the Merriam-Webster Dictionary, Taxonomy is the “orderly classification of plants and animals according to their presumed natural relationships.”

It is the way we categorize and make sense of the world around us. When we compare a coyote and hyena by taxonomy and nomenclature, we can see on a genetic level where certain traits are shared and where they differ.

When comparing these two, we see that they are very similar in traits and genetics from Kingdom down to Order. However, at the suborder, the divide begins.

Coyotes are grouped with most other dogs in the family Canidae, while hyenas have a standalone family, Hyaenidae”.

We also see that coyotes only have one genus (basically a surname) and species with many (19) subspecies.

For the sake of this comparison, we will focus on the spotted hyena, as it is one of the more charismatic species.

Genetics And Phylogenetic Trees Of Coyotes And Hyenas 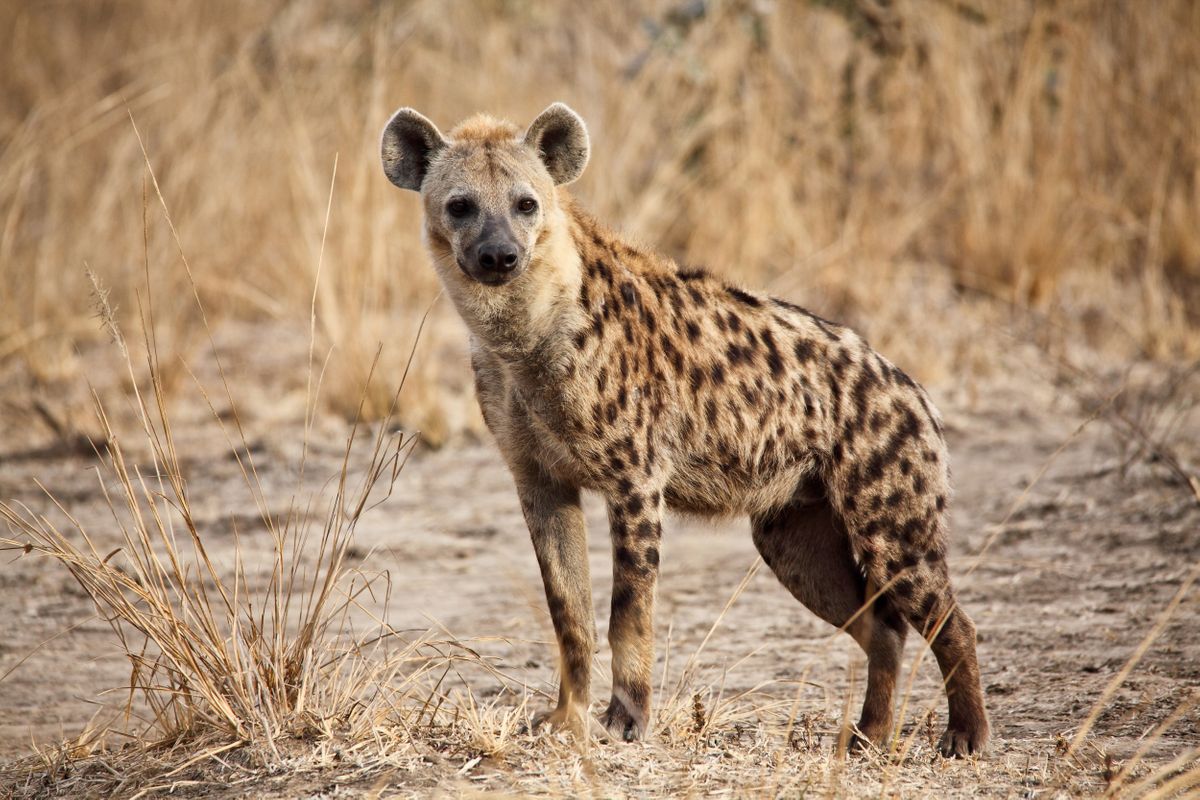 Simply put, a phylogenetic tree is your family tree.

Researchers take your genetics and compare them to other creatures in your taxonomy to find common ancestors. This allows them to “track” the progress and process of evolution through a particular species.

Coyotes are part of the dog family, and as such, their closest relatives are dogs and wolves, where they branched off from a common ancestor during the Pleistocene period.

Hyenas are different from coyotes. They are not part of the dog family and are only distantly related to the cat family. Mongoose and civets are their closest relatives.

Hyenas have also been divided into four separate genera, each with its species.

Anatomical Differences Between Coyotes And Hyenas 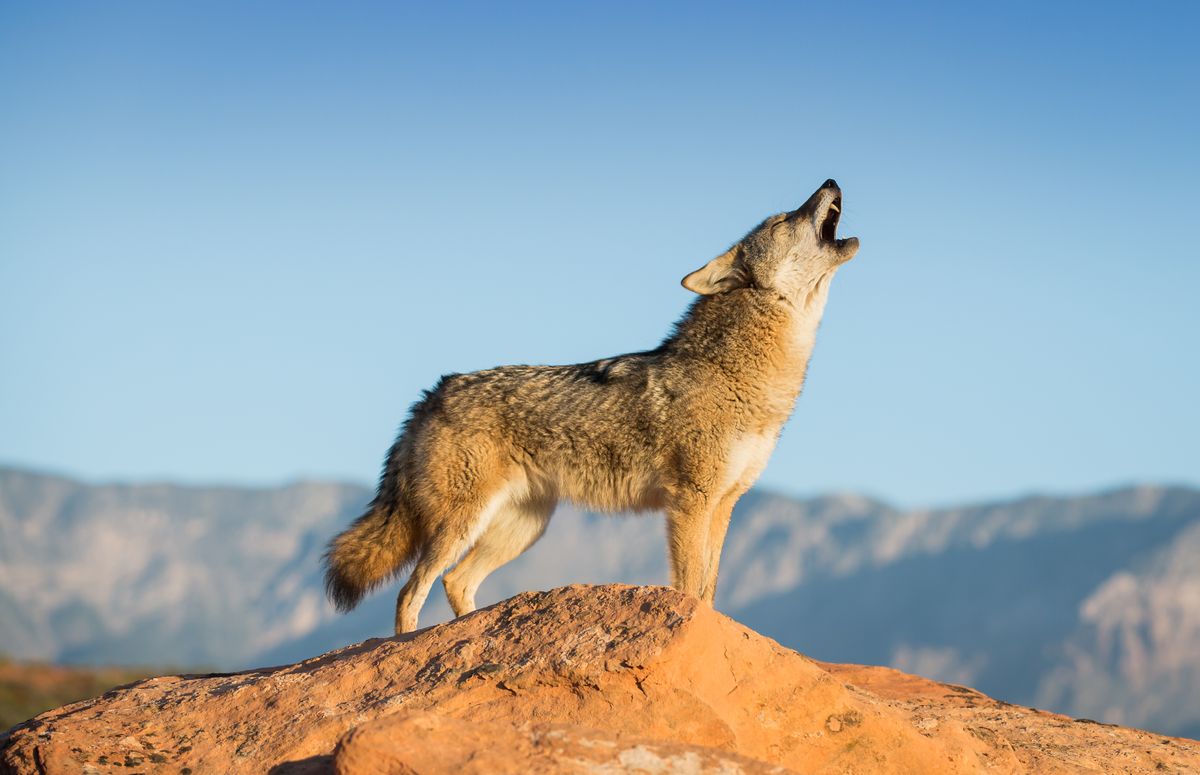 This next section is the most obvious; this is where we deal with how each species looks.

As humans, our primary sense of discrimination is sight. So when we look at coyotes and spotted hyenas, we can observe some differences and similarities.

Color is subspecies dependant. They often have grizzled gray or buff on the back, with black-tipped hairs on top. Below they are pale cream to grey with yellow hues. The face can be reddish-brown to grey. Coyotes have bushy black-tipped tails.

Light brown to beige or sandy over the body, with black or brown spots on the neck, shoulders, back, rump, belly, legs, and tail base.

They have pads underfoot with hard, un-retractable claws on four toes.

They also have pads underfoot with hard, un-retractable claws on four toes.

They are very dog-like in appearance. Same length front and back legs.

They look like something between a dog and a cat, with longer front legs than the rear, giving the hyena a sloped appearance.

Ecological, Behavioral And Distribution Differences Between Coyotes And Hyenas 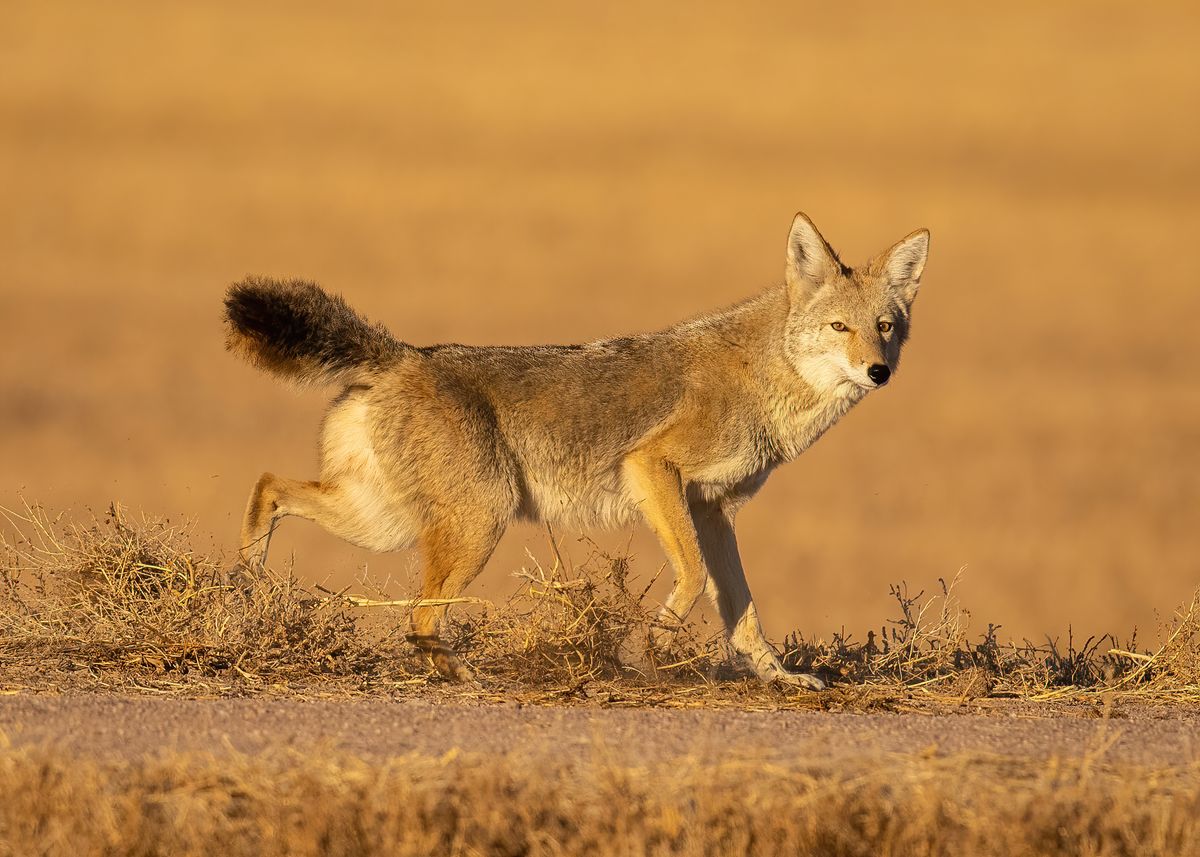 Coyotes and hyena are both vital parts of their various ecosystems, fulfilling roles and functions that have been eked out over thousands of years.

When we compare the two species in terms of ecology, behavior, and distribution, we should see more divides between them, but also some more similarities.

Distribution Of Coyotes And Hyenas

Simply put, in the wild, where do we find coyotes and hyenas.

Coyotes can be found throughout the majority of North and Central America.

As we see, these species are on opposite sides of the globe.

Habitat Occupied By Coyotes And Hyenas 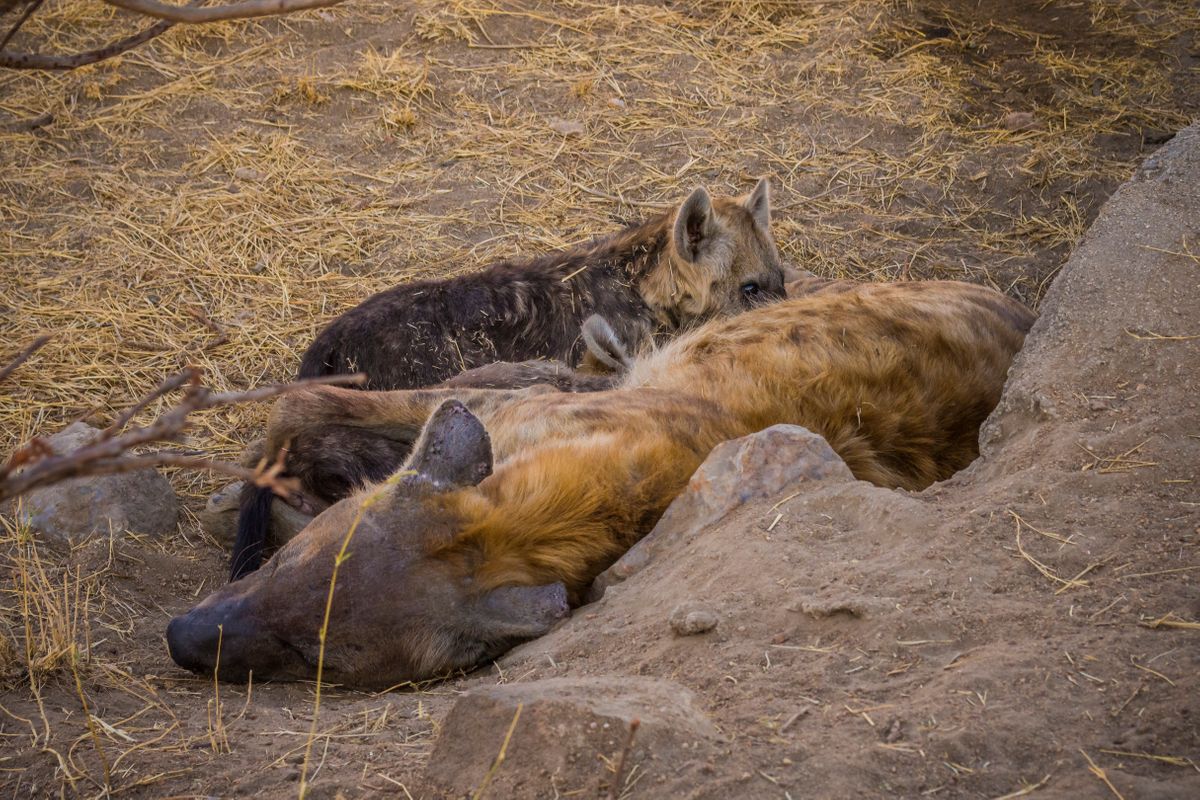 Coyotes were initially plains, prairie, and desert-dwelling species; however, with the movement of the European settlers in the Americas, coyotes were able to expand to occupy new habitats.

When around urban settings, coyotes seek out dense woodland areas to hide from humans. These areas include parks and golf courses.

For simplicity, we will look at spotted hyenas.

Spotted hyenas occupy savannah grasslands, semi-desert, and other open areas. They have also been known to inhabit swamps and mountainous forests.

Spotted hyenas are generally not found too close to urban areas; however, other species of hyenas are found in rural areas as they are more solitary.

We see that both coyotes and hyenas are widespread in their habitat use.

Coyotes, however, are better adapted to using a wider range of human-influenced areas. Wherever the food is, that is where these animals will go.

Niche And Prey Sources Of Coyotes And Hyenas 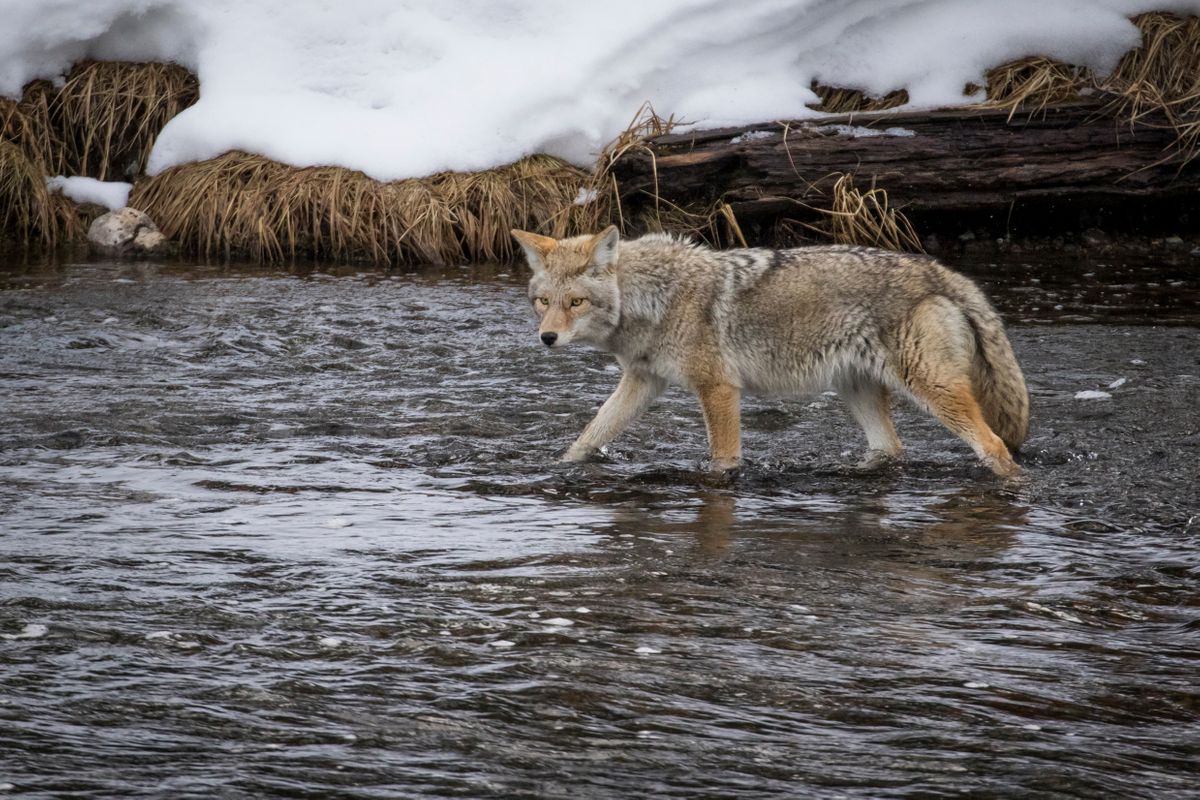 Coyotes are opportunistic feeders, and although they are carnivores, being omnivorous is not uncommon for them, with fruit being eaten in large amounts. Coyotes are hunters, but they are also willing to scavenge.

Hyenas are renowned as scavengers. However, spotted hyenas are considered to catch about 95% of their prey. They do, however, also scavenge and chase other predators off of their kills.

Typical prey sources include antelope and other large ungulates, in some cases even giraffe, zebra, and Cape buffalo.

Although similar in the variety to what they eat, hyenas generally eat larger prey items than coyotes. 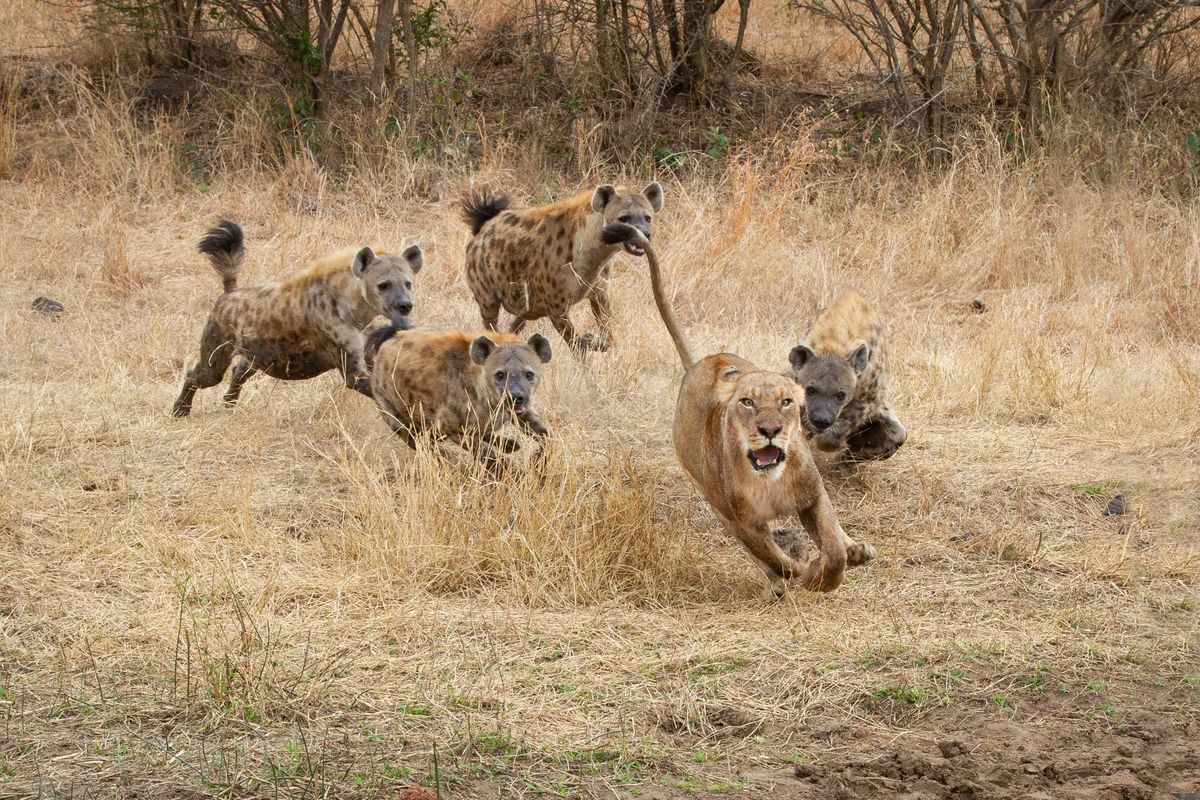 Coyotes will hunt small animals alone, where they stalk the prey item and pounce on it, but when they need to take down a bigger ungulate, they will coordinate with other coyotes in a pack.

Spotted hyenas hunt together in a group called a clan. They are endurance hunters and will chase prey for miles before it collapses from exhaustion when they then bite chunks out of it with their powerful jaws.

These clans can take down much bigger prey items.

When looking at the above criteria, we see some similarities in feeding, habitat, and social structure.

However, hyena clans are led by an alpha female, and all females are more aggressive and bigger than males.

Coyote packs, on the other hand, are led by an alpha male and female. Hunting is generally a solitary affair.

But What If A Coyote And A Hyena Had To Fight? 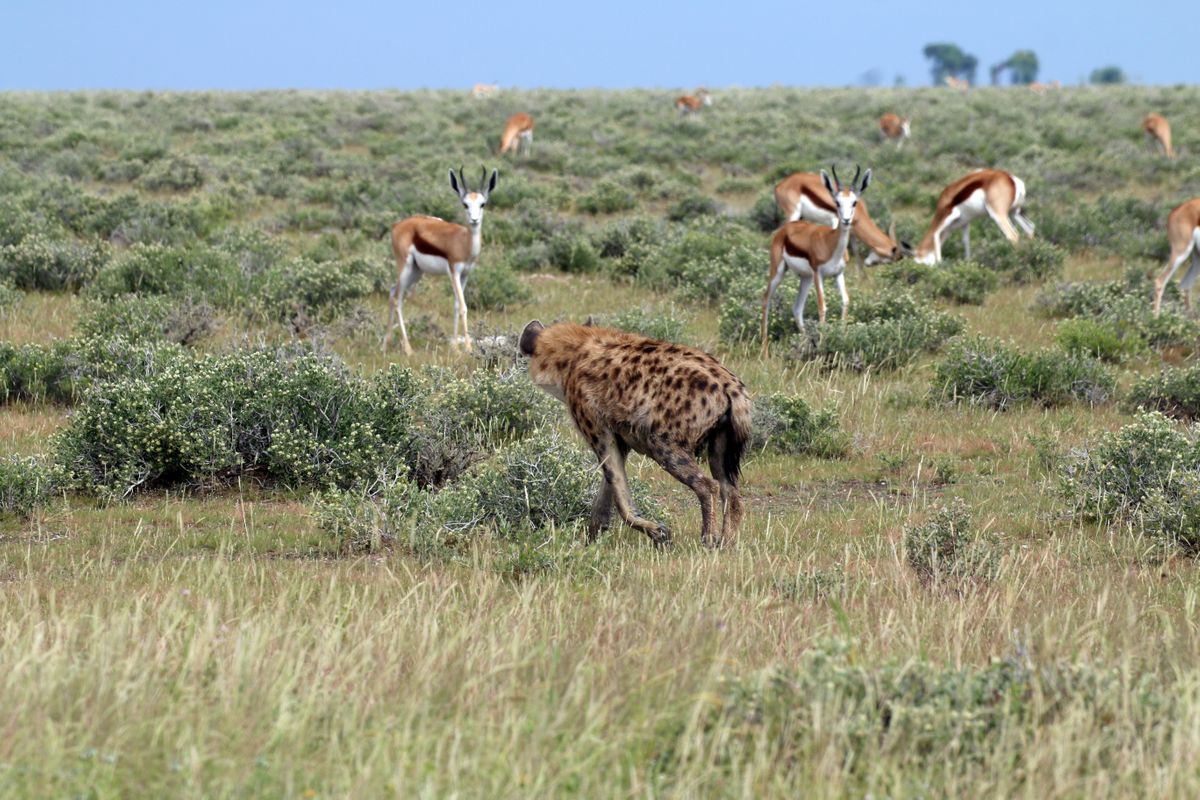 Although it will never happen (unless in a captive setting, and in which case it SHOULD NEVER happen due to ethics and animal welfare), if a coyote and a hyena had to fight, my money would be on the hyena.

True, there are many factors to consider. But if we look at a spotted hyena’s weight, bite force, type of prey they hunt and takedown, aggression, and behavior towards other local predators, I would say that they would annihilate a coyote in a “death battle” situation.

A coyote may have agility, but a hyena is tenacious and overall more powerful.

Fulfilling similar niches on their respective continents, coyotes and hyenas have some similarities, but also many differences, which is understandable due to the selective pressures that resulted in the two very different environments and the coping mechanisms that were needed to survive in each.

Both are vital to their environment and both should be conserved.