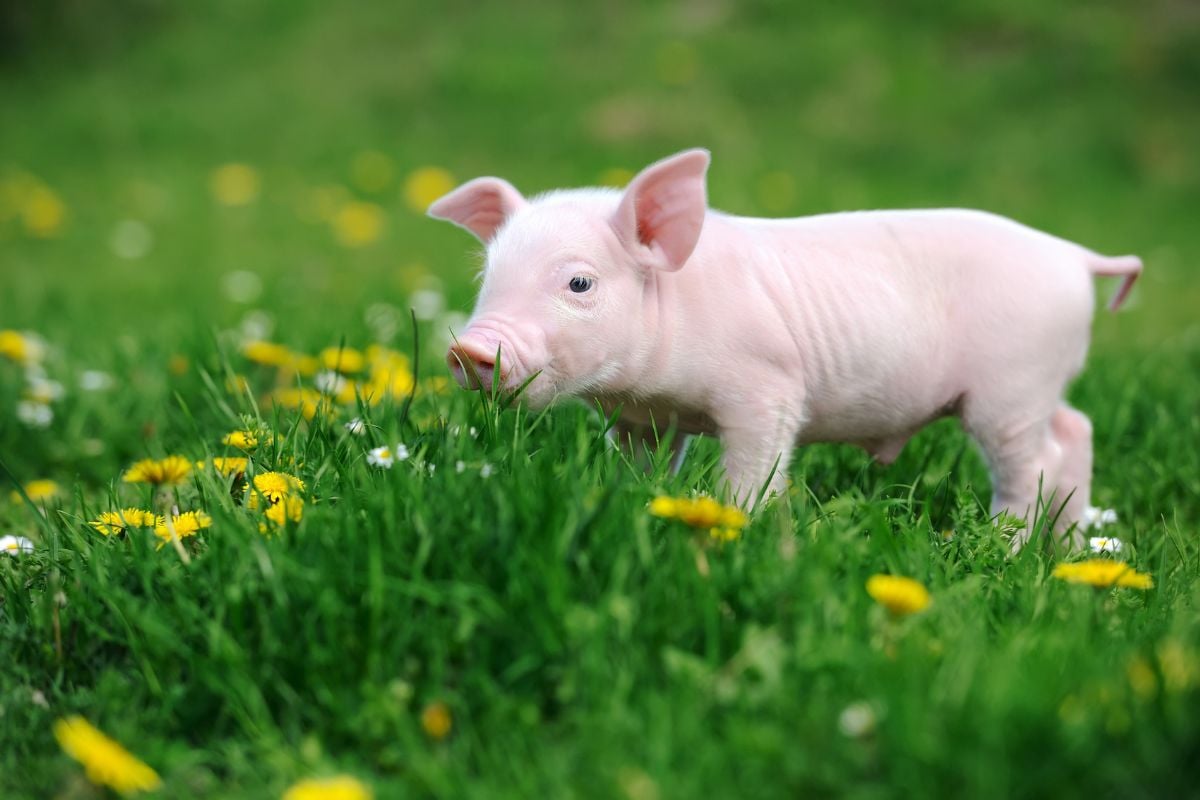 Pigs are a type of mammal that belongs to the Suidae family – a species originating across Europe, Africa, and Asia. According to PNAS – The Professional National Academy of Science, archaeological discoveries suggest that pigs were domesticated more than 10,000 years ago and introduced to Europe by Near East farmers a few thousand years later. In mid-2022, there were 752 million domestic pigs worldwide, with more than half in China, according to Statista.

Pigs are recognized to be among the most intelligent mammals, with an intelligence level that reaches that of a three-year-old. Only humans (& great apes), dolphins, and elephants are considered more intelligent.“Dogs look up to man. Cats look down on man.

Pigs look us straight in the eye and see an equal.” – Winston Churchill

Pigs, as omnivores, are opportunistic eaters who will graze and just about anything. However, domesticated pigs have a diet of corn, vegetable peels, barley, soy, and many other leftover food items. Their digestion of cellulose requires pigs to eat often.

Pigs wallow in the mud. This serves two purposes – it helps to regulate their body temperature and protects them from flies that bite. They also possess remarkable abilities to use their scent glands for various purposes. 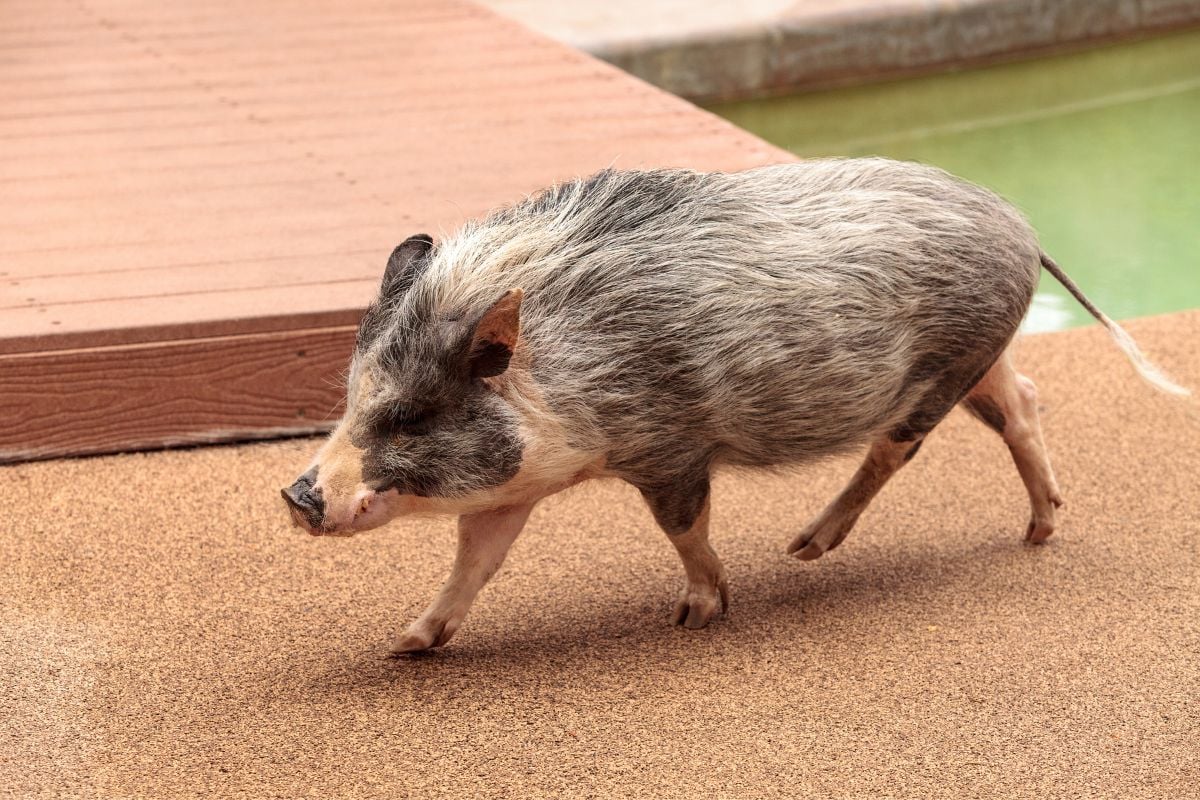 Domesticated pigs typically live on farms and are descendants of the Wild Boar. The domestic pig is found around the globe except in Antarctica. The pig’s size is impressive, and they grow quickly.

A domesticated pig can grow to 300 lbs. in one year and be a ton when fully mature. Wild pigs, which live in various environments (wetlands, forests, grasslands, and savannas), tend to be smaller. According to Guinness World Records, Big Bill is the largest pig, standing at five feet tall, with a weight of more than 2,500 lbs. 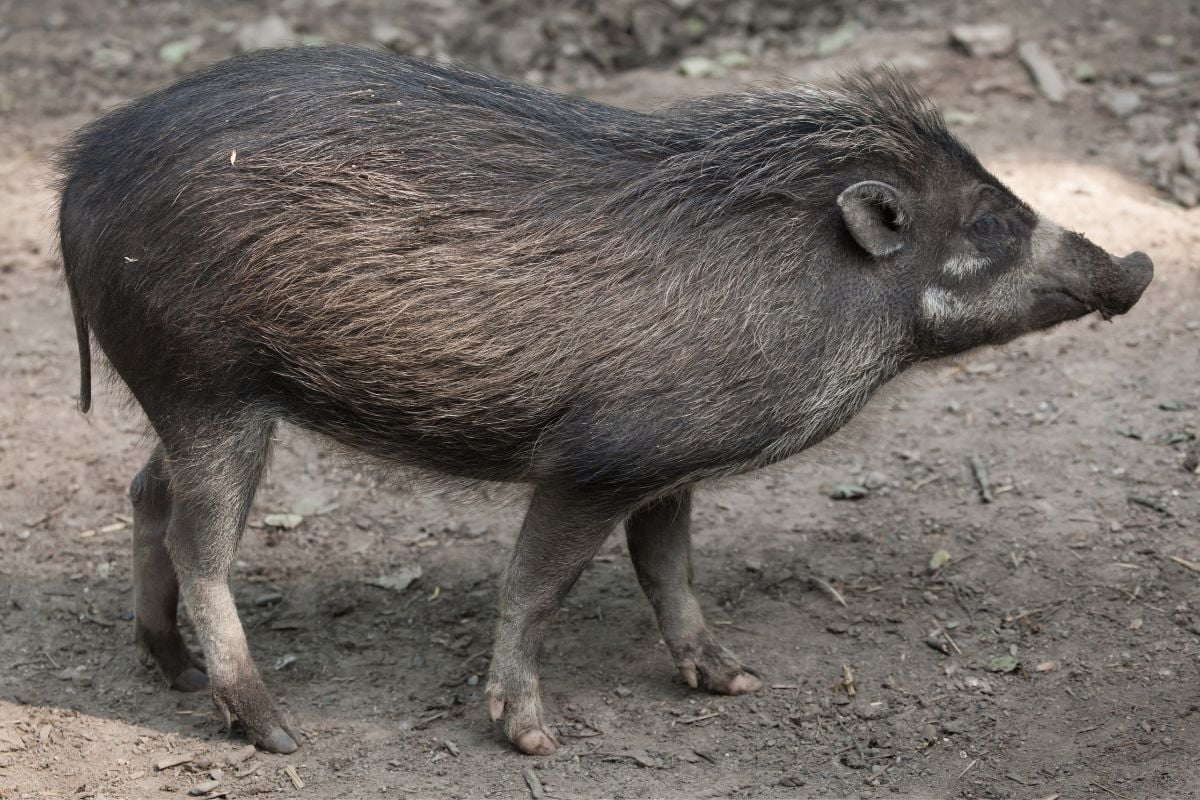 The Philippine Warty, as its name suggests, is endemic to the Philippines, along with three other varieties of Suidae mammal pigs. This Suidae animal has dual pairs of warts with hair tufts extending towards the warts that are located closest to its jaw. The Philippine Warty, with two known subspecies, inhibits shrublands, forests, and grasslands and is most active at night, feeding on plants and grasses and such. The average adult weighs about 225 lbs. and can live as long as seventeen years. 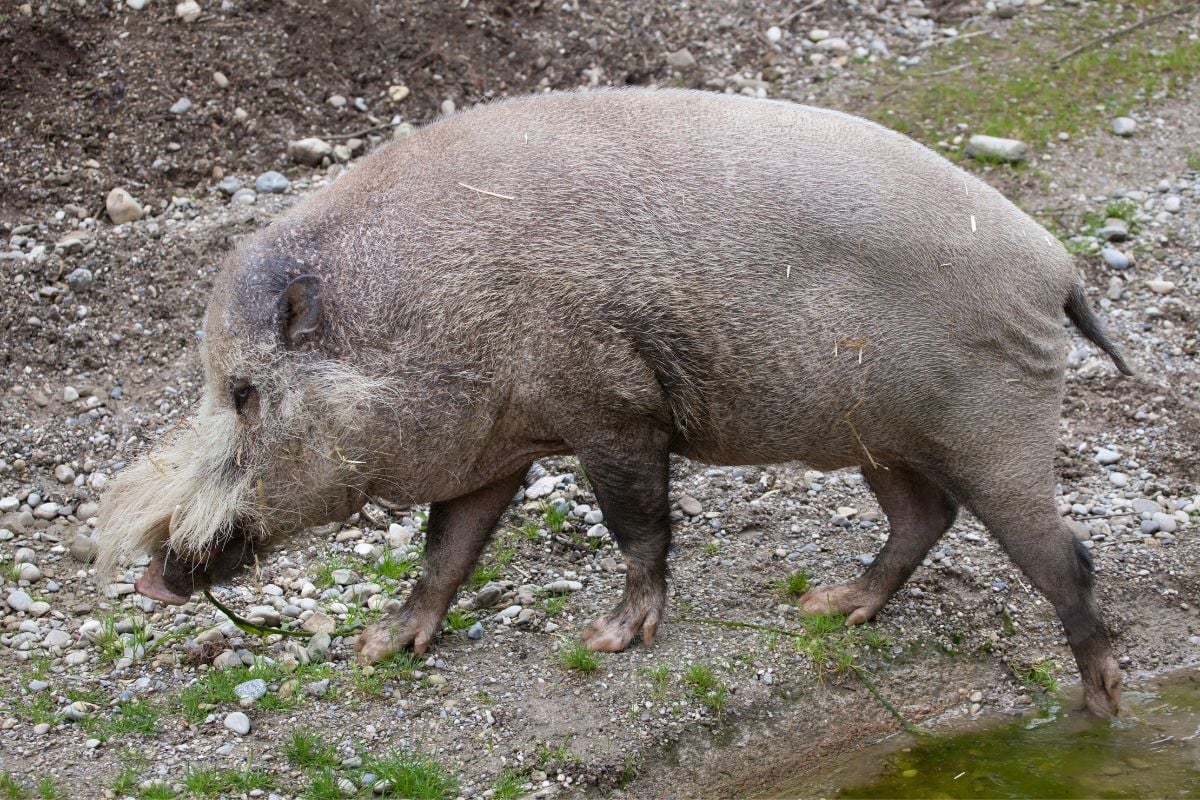 The Palawan Bearded Pig weight can reach as much as 330 lbs., and they can stand as tall as 3 1/3 feet. These unique looking mammals are typically nocturnal and forage across grasslands, wetlands, and forests. 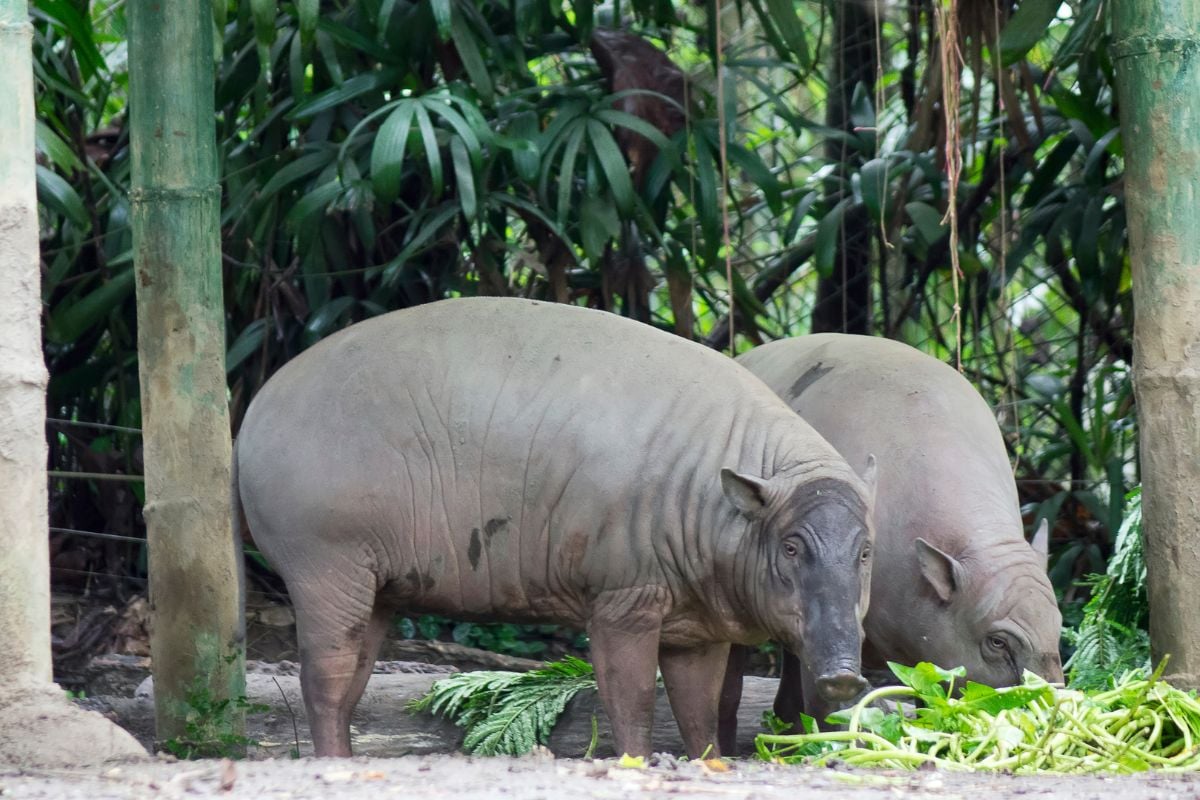 The Buru Babirusa (aka Golden Babirusa) is a smaller type of animal similar to the Suidae family that has a maximum weight of approximately 220 lbs. In the language of Malay, babirusa translates to “pig deer,” which references its unusual tusks (that are really upper canine teeth that grow through its snout). The Buru Babirusa is native to several Indonesian islands.

Like the pig, the Golden Babirusa is an omnivore and eats everything from nuts, mushrooms, insects, and leaves. They tend, as great swimmers, to inhabit river banks, rainforests, or ponds with water plant growth. 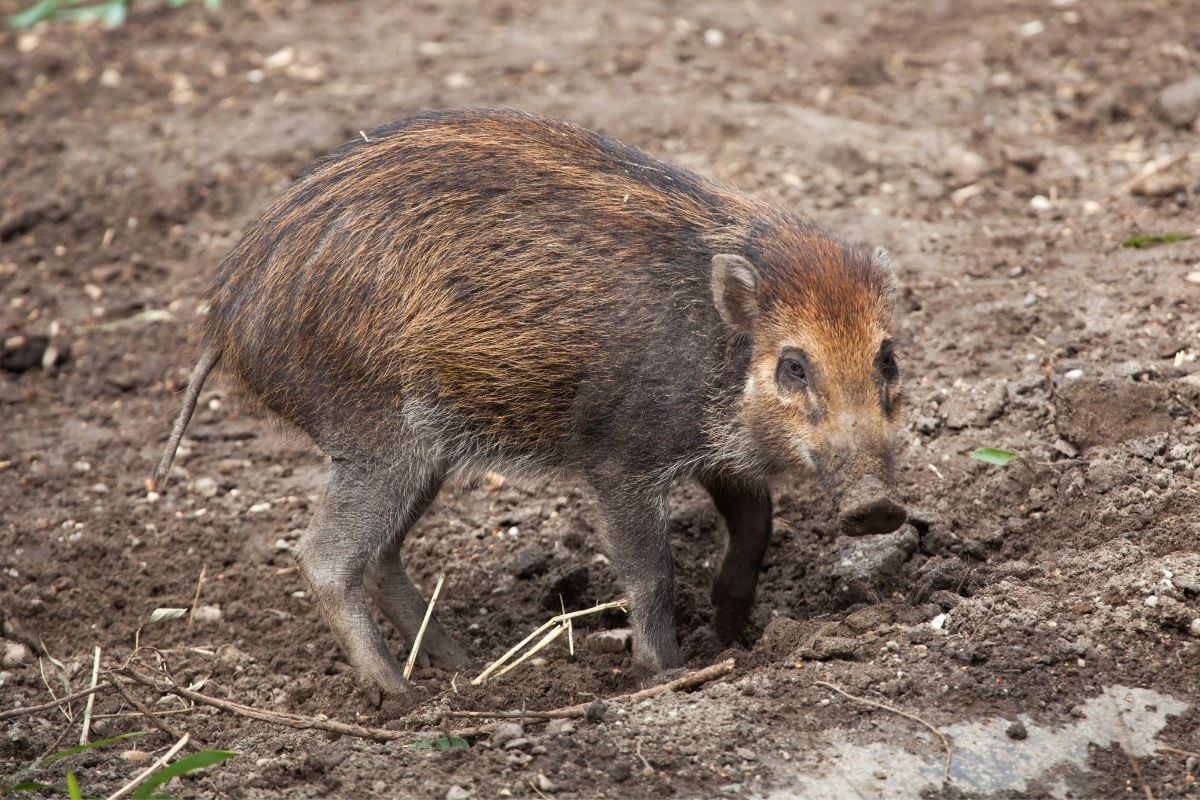 The Visayan Warty Pig, which is considered an endangered Suidae species, inhabits the dense forests native to the central Philippine Islands – Panay and Negros.  These mammals, like the domesticated pig, are omnivores but prefer forest roots, fungi, bulbs, fruits, and nuts, to name a few. In mating season, the males grow a floppy mane of hair that can be nine inches long.

The Visayan Warty Pig, with its dark grey color and typical barrel-shaped body, grows up to three feet tall, weighs upwards of 400 lbs., and lives for up to fifteen years. 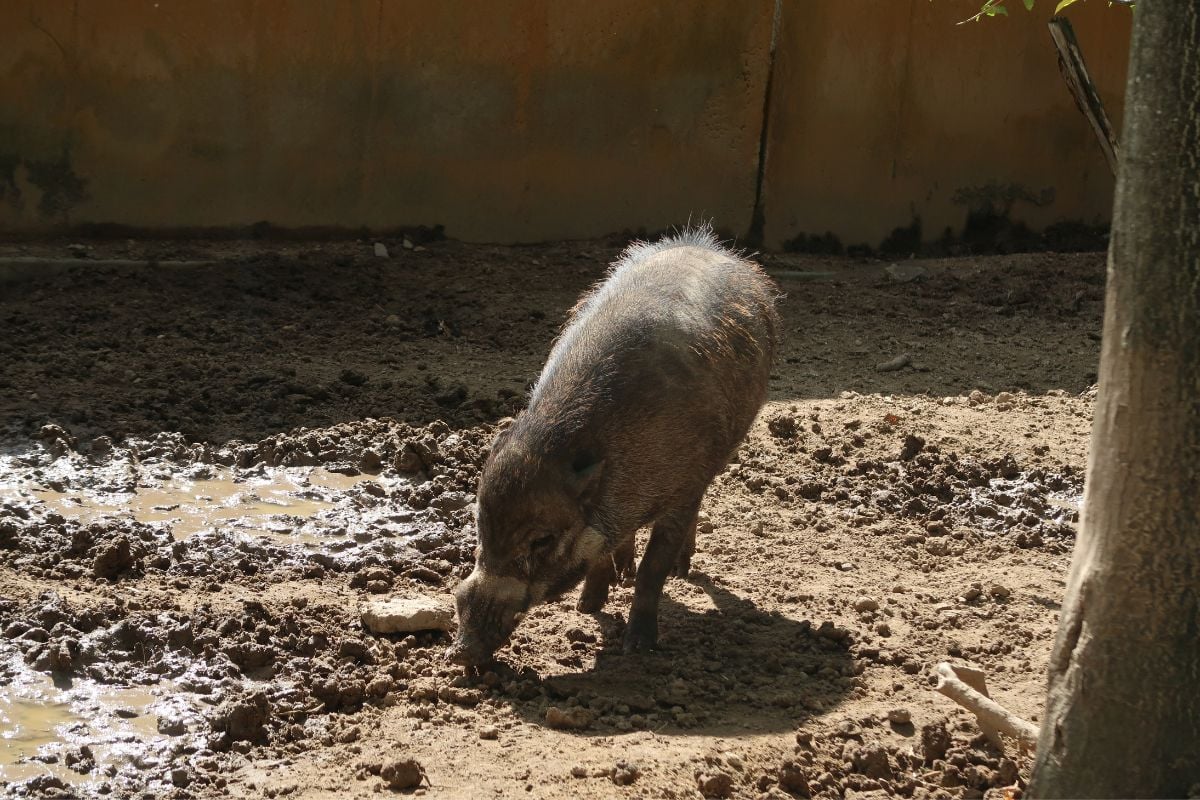 Little has been developed, known, or studied about the Mindoro or Oliver’s Warty Pig that is native to the island nation of the Philippines, but most specifically to Mindoro Island. The Mindoro Warty Pig (which is sometimes referred to as Oliver’s Warty Pig) is active day and night, choosing to forage in upland agricultural regions in search of root crops. Their primary diet consists of invertebrates, fallen fruit, roots, etc., found in grasslands, forests, savannas, and shrublands. 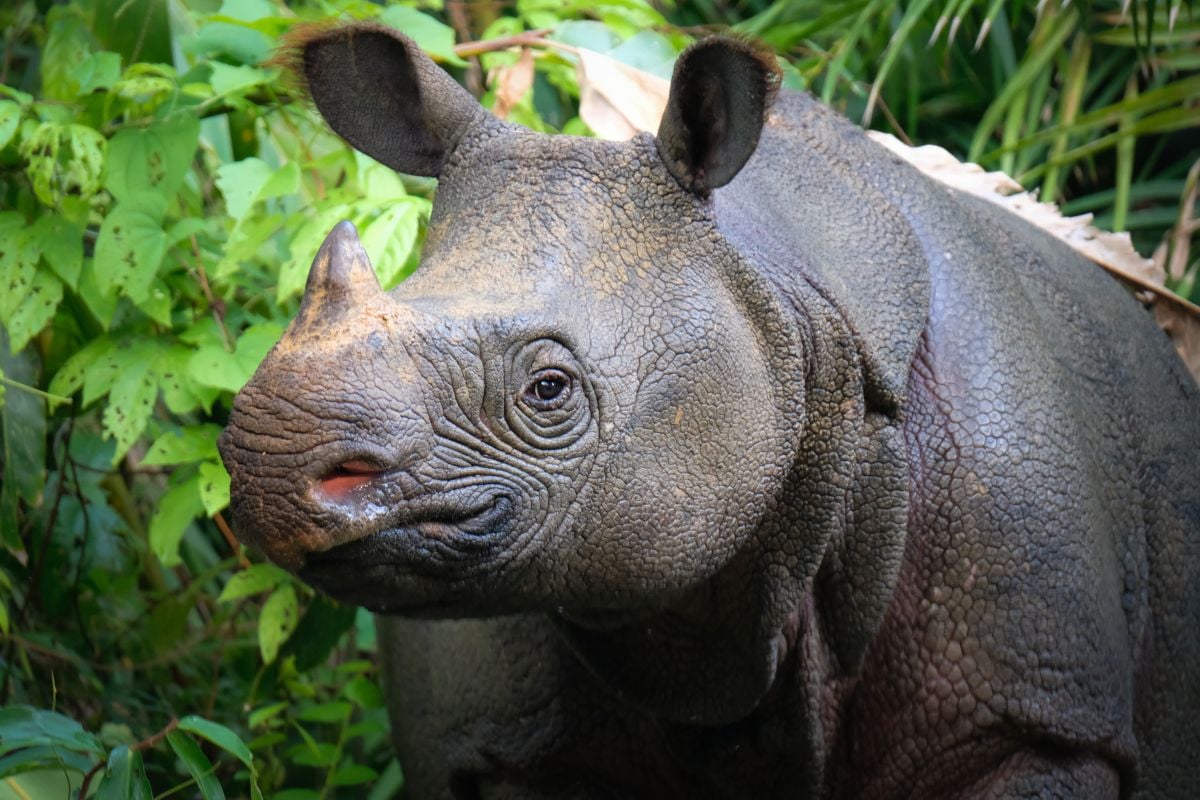 The Javan Warty Pig, like a pig, is an ungulate mammal in the Suidae family. The Javan Warty Pig, is native to several Indonesian islands and is considered endangered. In this type of pig, the males (325 lbs.) are nearly twice as big as females (150 lbs.)

In addition, males develop distinctive warts near their eyes, ears, and the jaw. Like the pig, the Javan Warty is an omnivore and is primarily nocturnal, feasting on everything in the forest’s undergrowth. 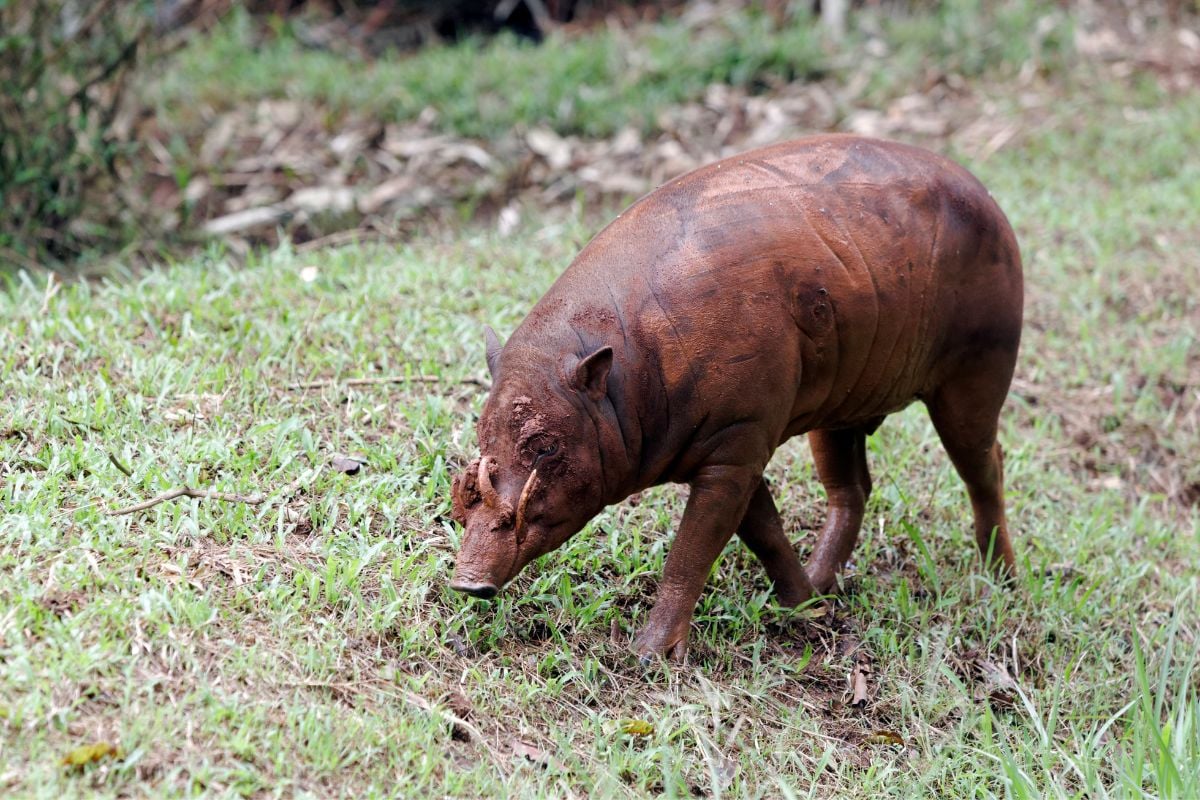 The Togian Babirusa, which may also be known as the Malenge babirusa, is the largest babirusa species. The Togian Babirusa, like the domesticated pig, is an omnivore, preferring to feed on fallen fruit, worms, and roots, to name a few. However, the Togian Babirusa does not forage with its snout on the ground, choosing to use its paws to uproot plants to feast on.

These mammals inhabit intertidal zones, forests, freshwaters, and wetlands and have been seen swimming between islands. Adults are estimated to grow to at least 225 lbs. 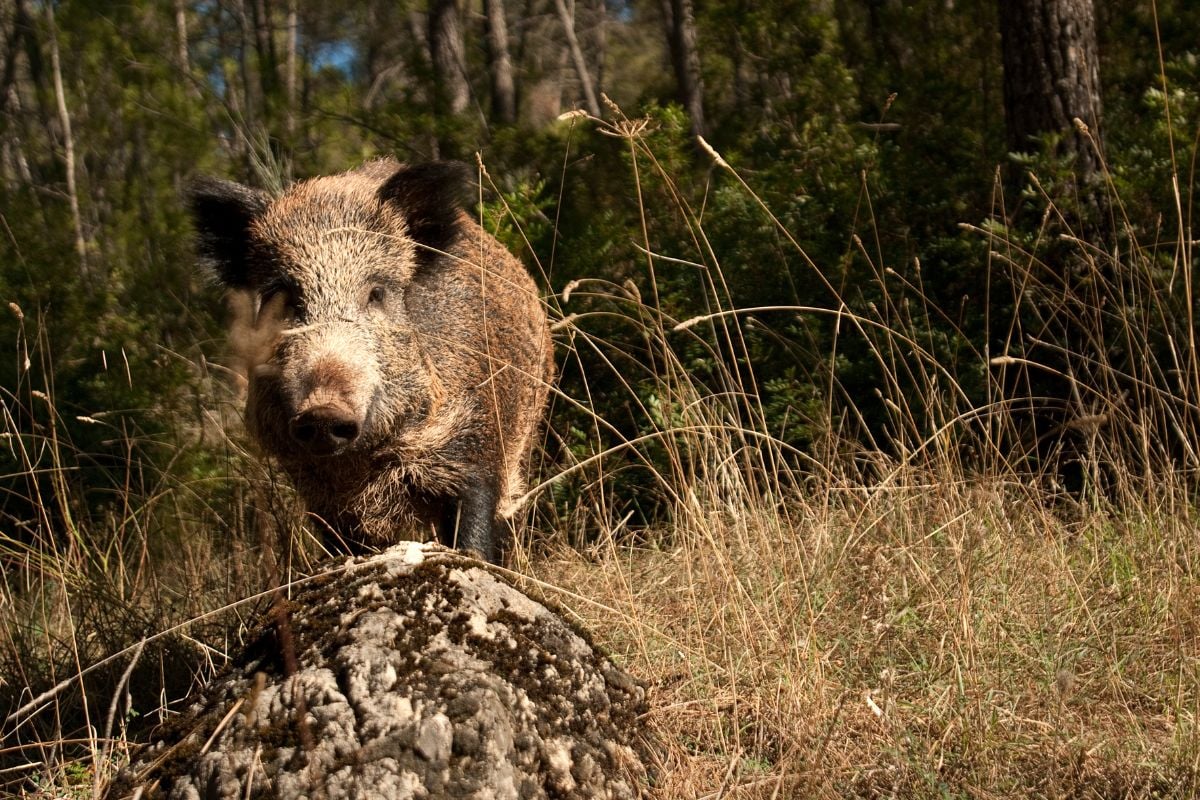 The Wild Boar, also called a feral swine, or feral pig, has natural habitats covering several continents, including Europe, Asia, and northwestern Africa. Wild Boar can run fast – up to 30 miles per hour and are quite adept at swimming. This is quite impressive, considering they can weigh over 300 lbs.

This mammal is a close ancestor to the domesticated pig and is also an omnivore, foraging on most anything from fruits, nuts, plants, small rodents, and insects. The Wild Boar inhabits a variety of environs like forests, woodlands, grasslands, savannas, deserts, moist forests, and tropical dry forests, to name a few. 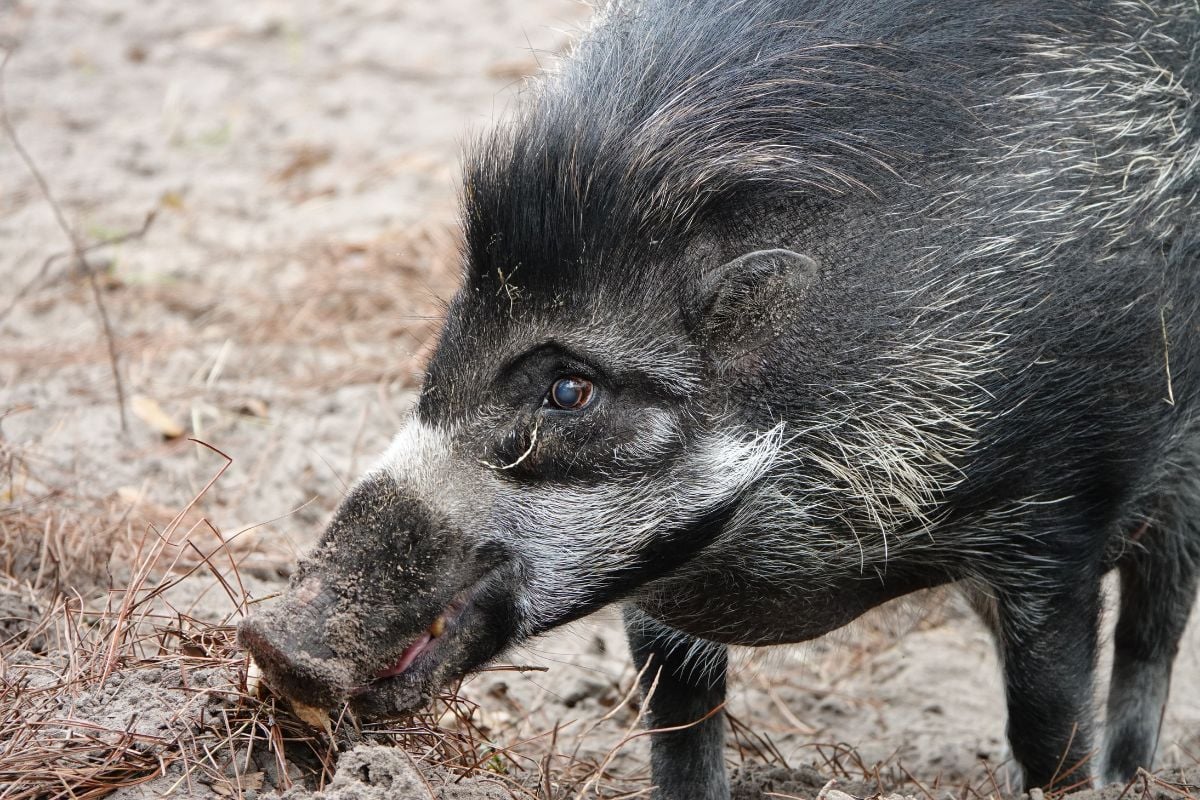 These mammals have shorter legs than a domesticated pig, often with an infusion of yellow or red along its flanks. As omnivores, the Celebes Warty Pig forages on roots, foliage, and fallen fruit, to name a few. Their habitat using includes riverine forests and lowland bamboo – above 8,000 feet above sea level. 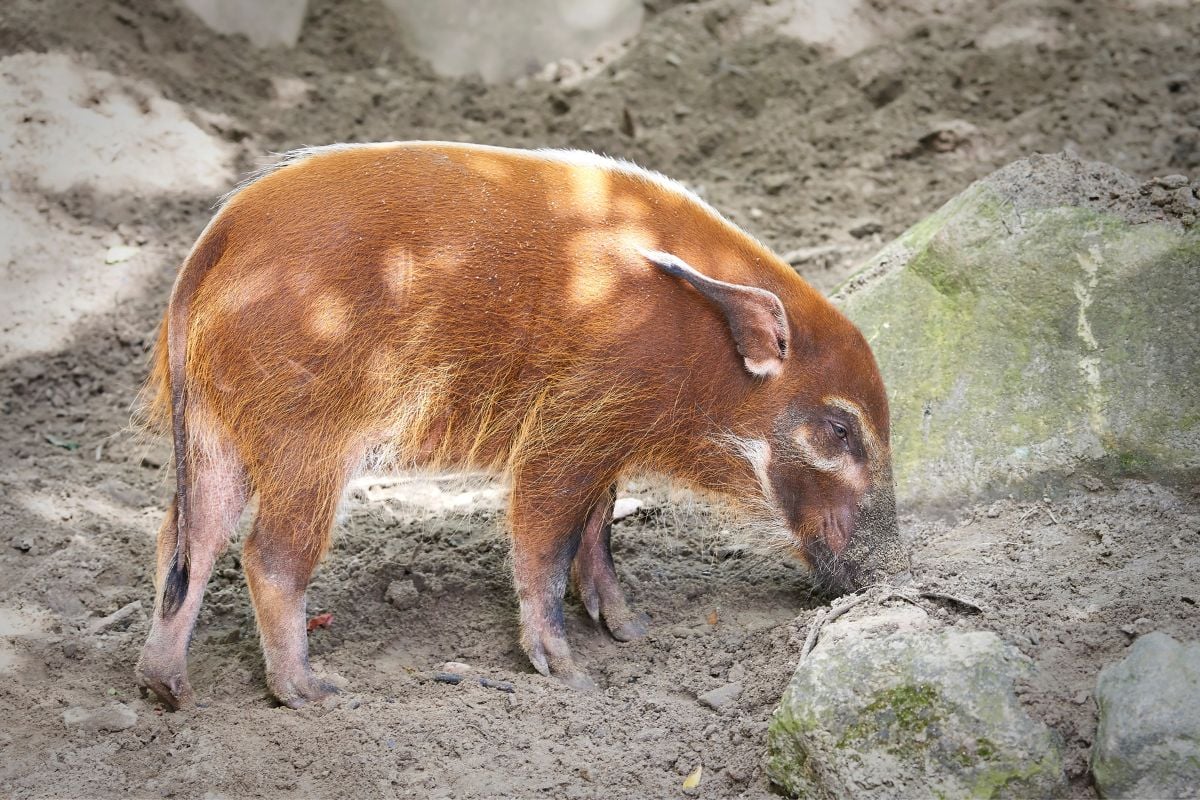 The Red River Hog, like other pig-like animals, has a great sense of smell, which helps it find food.  These mammals are omnivores and scavengers that eat figs, grass, herbs, insects, avocados, roots, grubs, and papaya – plus any other dropped fruit. The Red River Hog of the Suidae family can grow to as much as 250 lbs. and live 15 to 20 years.

Their preferred habitats include swamps, forests, grasslands, and savannas that extend from Senegal to the Congo Basin. Their fur ranges from orange to reddish-brown. 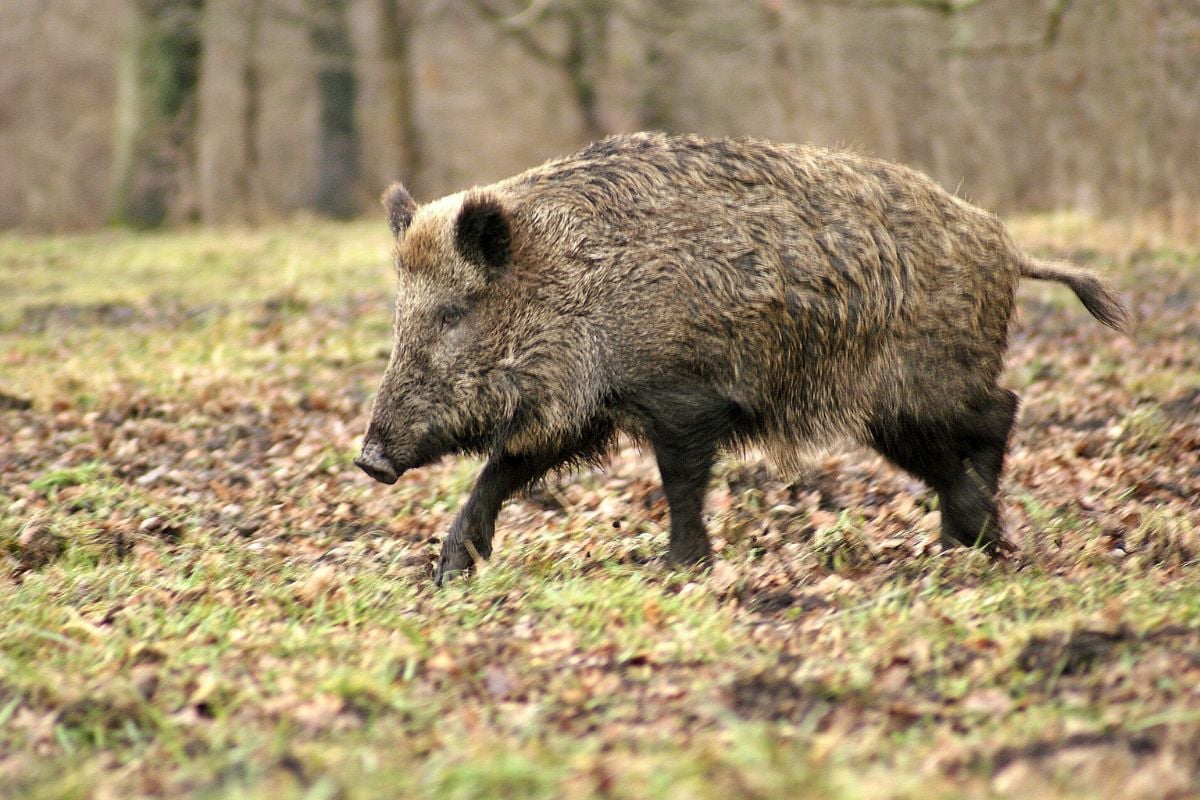 These wild pigs are mostly black with large pointy ears. The Giant Forest Hog is a bit elusive but inhabits highlands as well as wooded savannas, grasslands, and subalpine habitats. Unlike the pig, the Giant Forest hog is an herbivore, a folivore (who prefers to eat leaves), and a scavenger by nature. 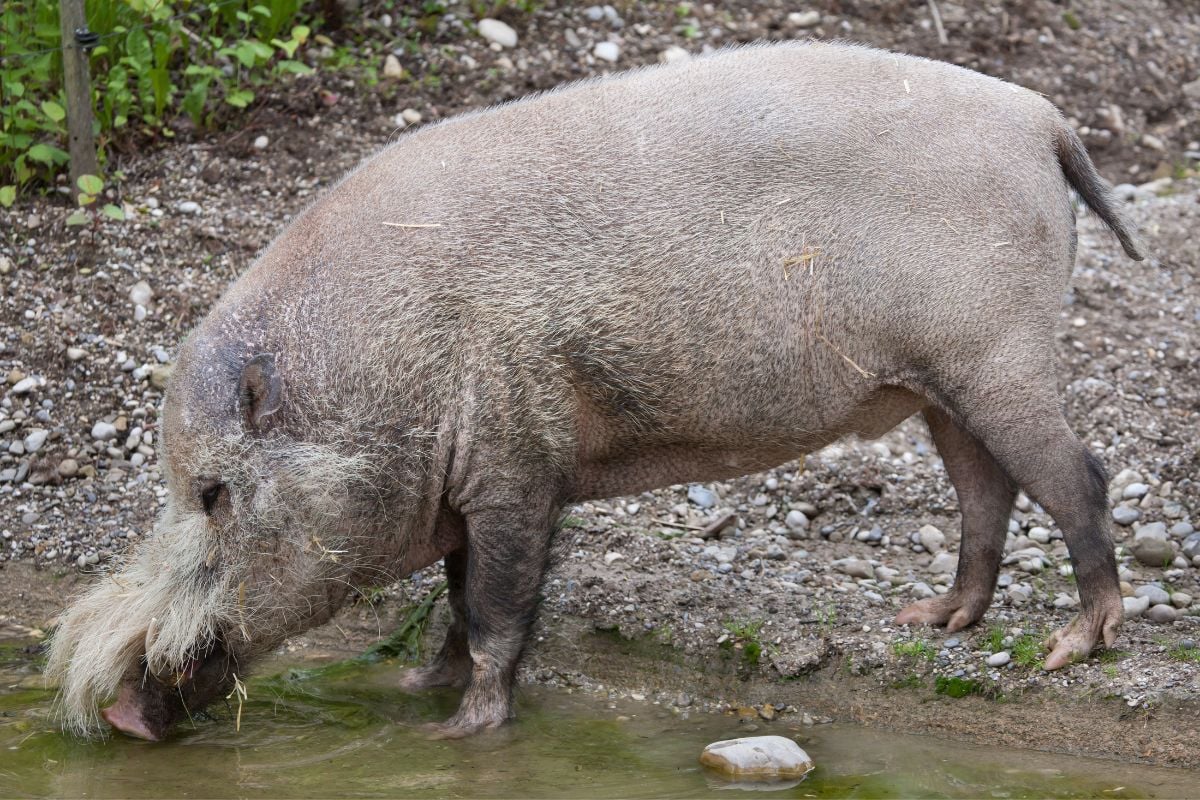 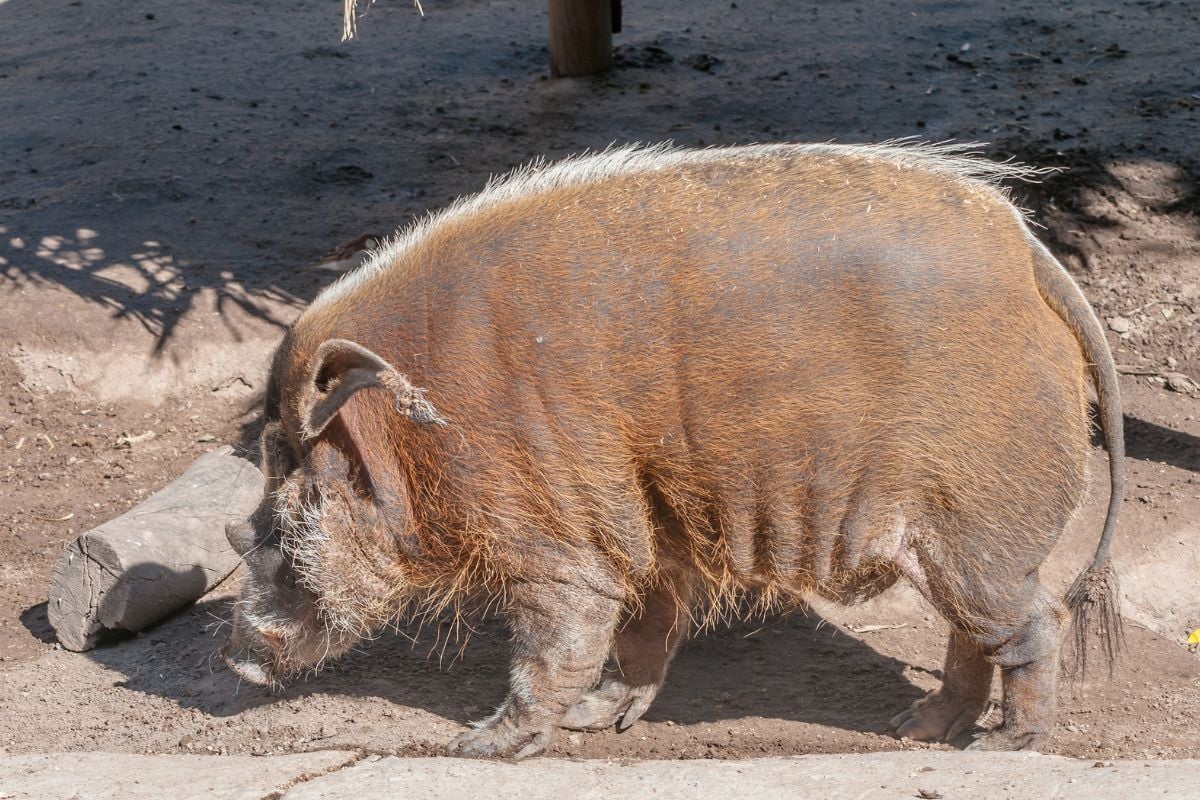 The Bushpig is a mammal in the Suidae family that is quite similar to the domesticated pig. These nocturnal animals are scavengers and omnivores that inhabit many sub-Saharan east and southern African countries. These pig-like creatures are quite social, territorial, and nocturnal by nature.

The Bushpig comes in a variety of colors which tend to darken as they age. Their habitats cover a wide variety of woodlands, forests, shrublands, wetlands, swamps, and tropical forests, to name a few. The Bushpig tends to follow monkeys and pick up their food droppings along the way.

The male Bushpigs can live two decades and grow to over 300 lbs., although males tend to outweigh and outsize female Bushpigs. 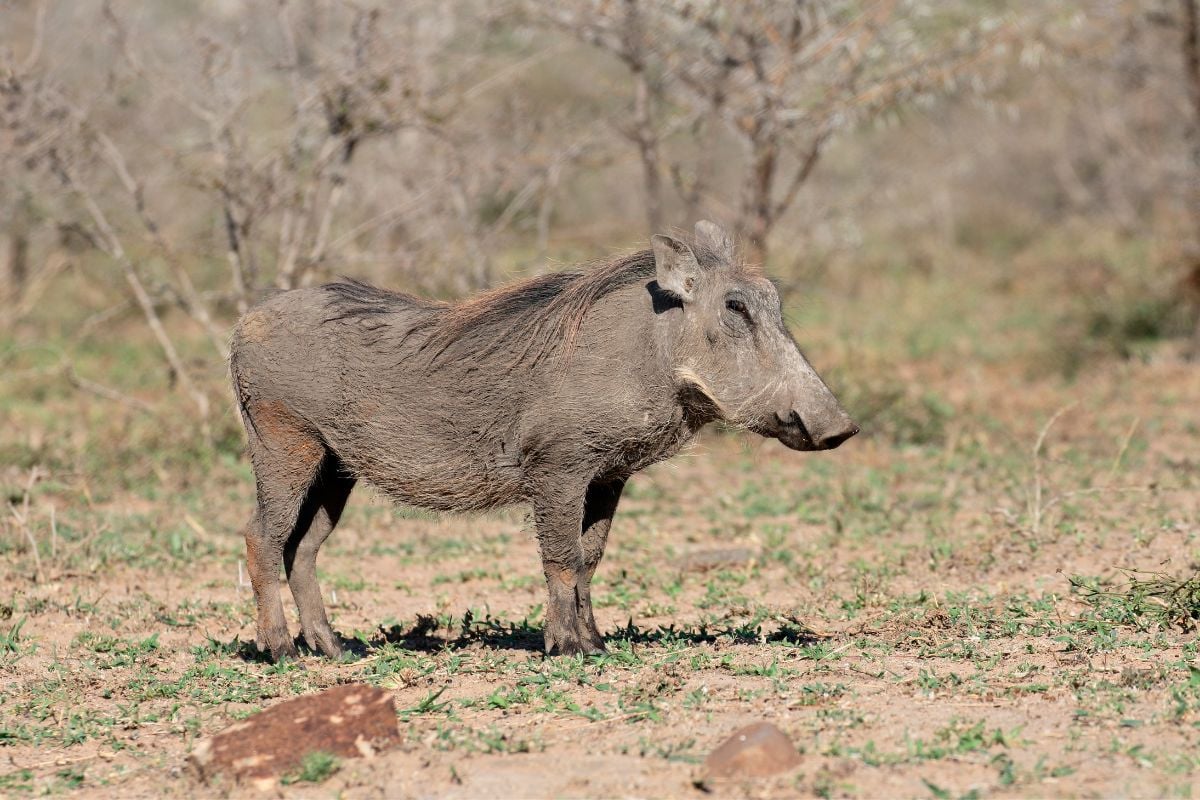 The Desert Warthog, like most pigs, are stocky, rotund animals. While they tend to scavenger for food, they also graze on leaves, bulbs, tubers, grasses, flowers, fruit, and plants as an herbivore and folivore. The Desert Warthog is native to the countries of Somalia, Ethiopia, and Kenya – all part of the Sub-Saharan African region.

They inhabit areas close to the water but often live in scattered woodlands or sandy plains. These social pig-like animals live in groups known as sounders. For short distances, the Desert Warthog can run nearly 35 MPH – especially if running towards safety. 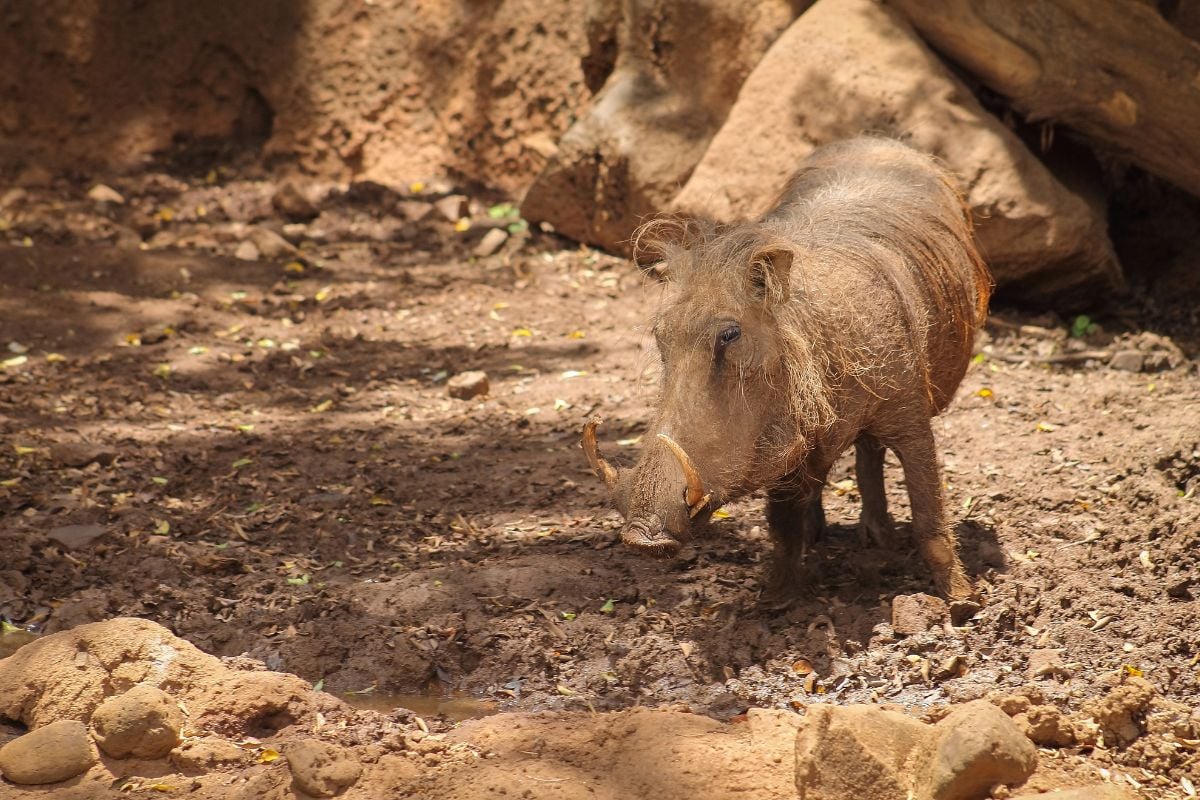 The Common Warthog are wild types of pigs but are quite similar to the pigs that have been domesticated around the world. Like most pigs, the Common Warthog, has a keen sense of smell, and as an omnivore, it helps them find the best places to forage for roots, tubers, and even small animals hiding beneath the surface. Their natural habitat includes grasslands and woodlands across most of the continent of Africa, where they can wallow in mud which acts as a sunscreen and parasite repellant.

Depending on the animal, a Common Warthog can grow to 250 pounds. Their tusks, which are canine teeth, can grow as long as two feet but average about six inches. 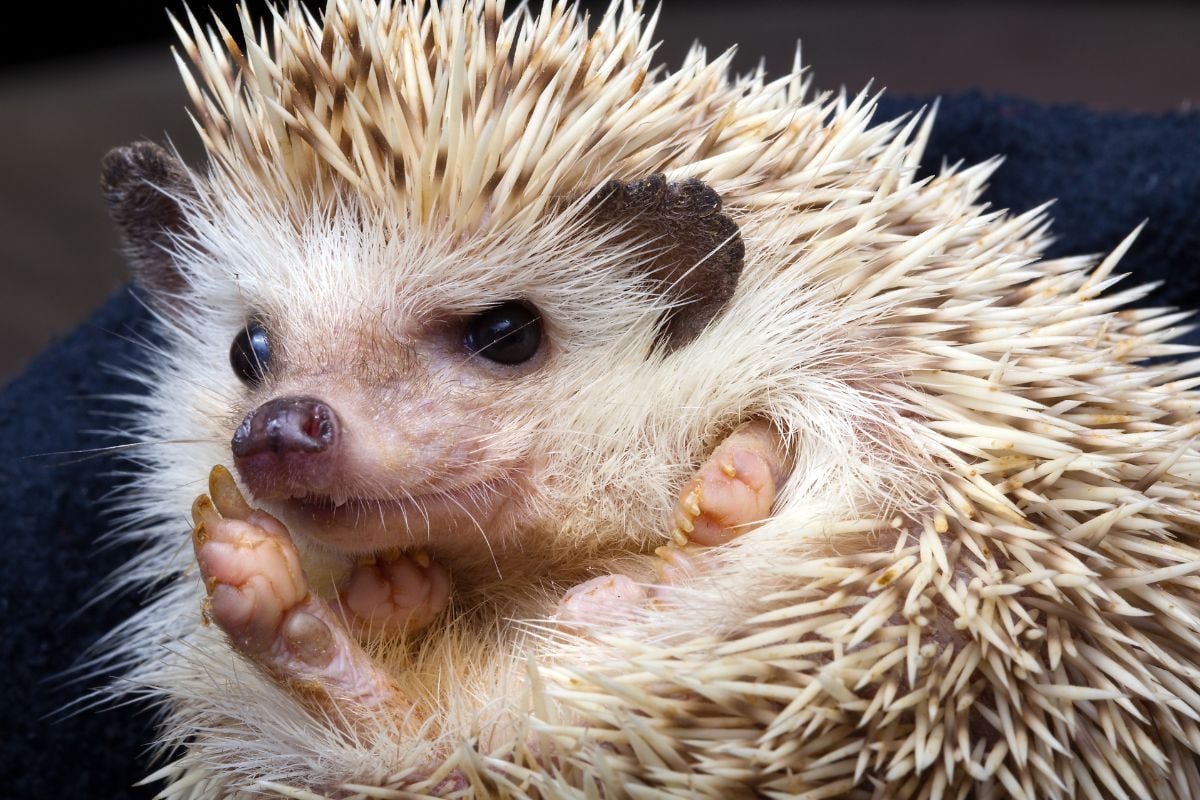 The Pygmy Hog, which lives on the foothills and lower grasslands of the Himalayas in India and Bhutan, is a small mammal in the Suidae family.  The Pygmy Hog weighs upwards of twelve pounds and is about ten inches at its maximum height. These social pigs live in small family-like units. And, like domesticated pigs, Pygmy Hogs are omnivores who choose to feast on tubers, roots, insects, and rodents, to name a few.

The Pygmy Hog is diurnal, which means they spend most of the day foraging for food but mostly in tall, dense riverine grasslands. The Pygmy Hog is the world’s smallest type of pig.

Are all pigs ungulates?

An ungulate is defined as a type of mammal characterized by hooves. Ungulates, as a group, cover a diverse variety of animals, from hippos to rhinos to horses, giraffes, and pigs, to name a few.

Are all pigs omnivores?

Pigs can feast on just about anything, which makes them primarily omnivores.  Their sharp incisors (which are canine teeth that have broken through the snout) and the rest of their molars make it simple to feed on crunch vegetables and plants. In the wild, nature, and instinct control their diet.

When a pig is domesticated, its diet needs to be changed because wild pigs can no longer choose their diet for themselves. Only a small percentage of their daily diet includes meats or insects; however, their intake is what defines a pig as an omnivore

Do pigs inhabit all continents?

Wild and domesticated pigs live all around the world – except on the continent of Antarctica.

Is a pig’s sense of smell a more potent tool for finding food than their eyesight?

Pigs are notorious for their incredible and powerful sense of smell. While this super-charged sense is used for many purposes, one of its main objectives is to make it easier to forage and find food. A pig’s eyesight, comparatively speaking, is not nearly as effective or reliable.