Goldfinches are sexually dichromatic birds, which means males and females have differences in coloration. Males are bright yellow, while females are a muted yellow-brown color. Both males and females can grow to be between 4.1 and 5.1 inches in length.

This bird is a granivore and primarily eats seeds, which it removes from seedheads with its conical beak. While goldfinches typically live between three and six years in the wild, they can live for as long as 11 years. Goldfinch is a charming bird that is easy to spot, but they share many similarities with these 15 birds. 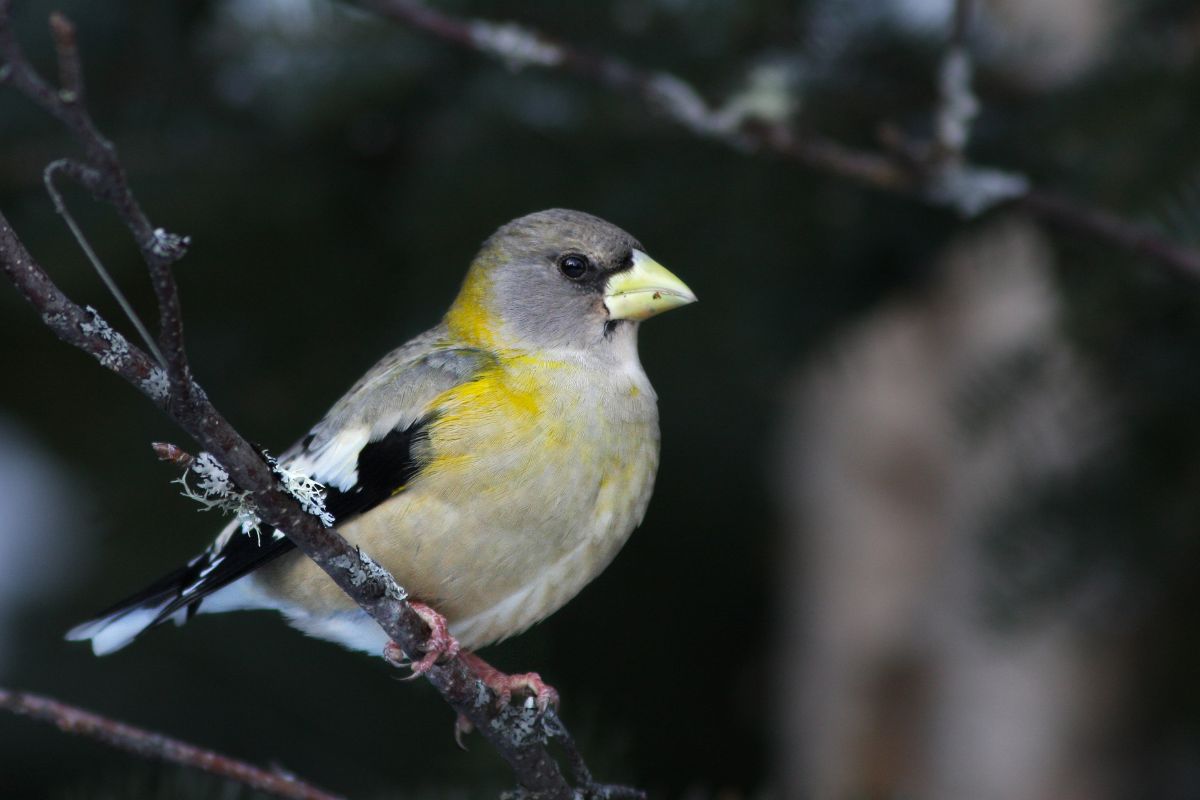 Evening grosbeaks are a type of finch that is found in forested and mountainous regions of North America. They eat both seeds and berries and are particularly fond of sunflower seeds. While the number of evening grosbeaks in the wild has decreased significantly in recent years, these birds can live up to 15 years.

The evening grosbeak is similar to the goldfinch in both coloring and body shape, which makes it easy to confuse the two birds from a distance. However, evening grosbeaks are much larger than goldfinches, growing to be between six and nine inches in length. Unlike the goldfish, it also has distinctive white patches on its wings. 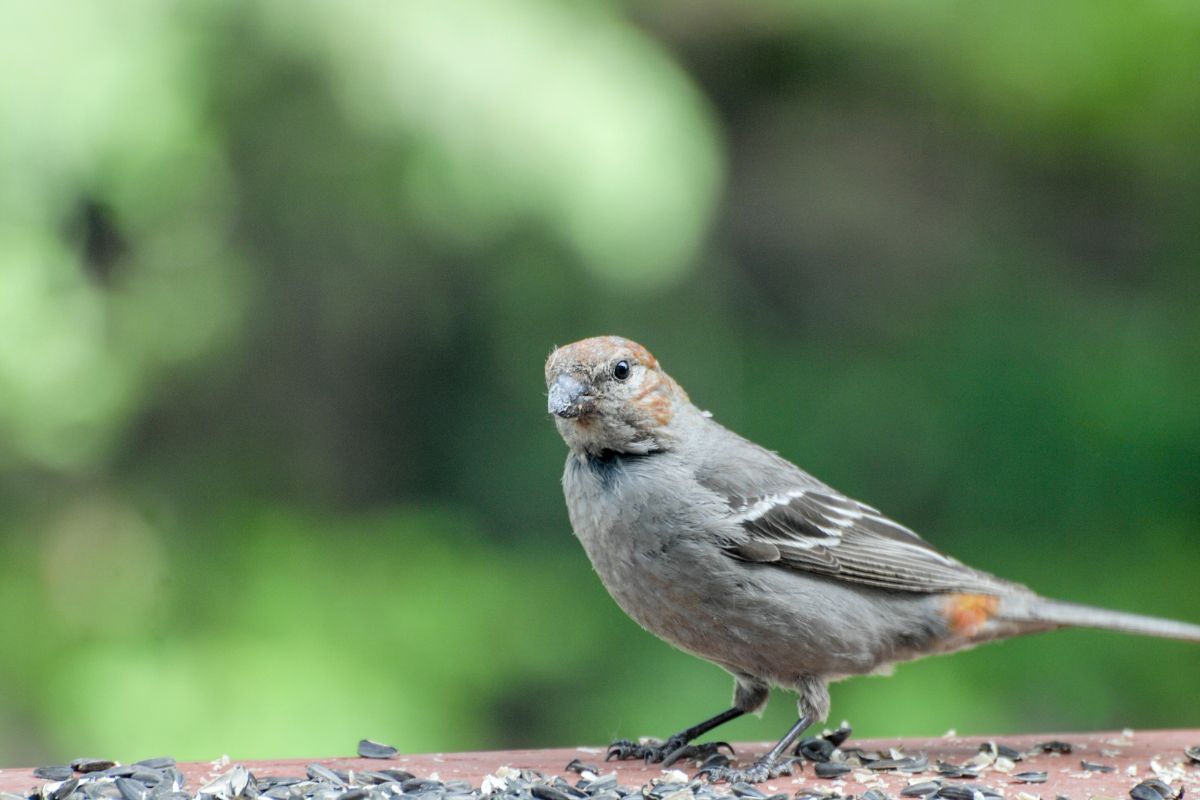 Pine grosbeaks can be found in coniferous forests in the United States, Canada, and Siberia, where it primarily feeds off small fruits and berries. While it’s a finch, it’s much larger than most finches, measuring between 7.9 and 10 inches. In the wild, these birds can live for more than 9 years.

Male pine grosbeaks have a mixture of gray and pinkish-red feathers, while females have gray and yellow feathers, giving them a similar appearance to female goldfinches. However, pine grosbeaks have a conical beak that is shorter and stubbier than the beak of a goldfinch. This bird can thrive in colder climates but may travel long distances when food sources are limited.

This warbler species is surprisingly widespread and can be found in North America, South America, and the Caribbean. They primarily feed on insects, which means they won’t come to bird feeders. Although they’re small birds, their size can vary, with birds measuring anywhere between 3.1 and 7.1 inches in length.

If the bird is a goldfinch, it will have a white patch below its tail. 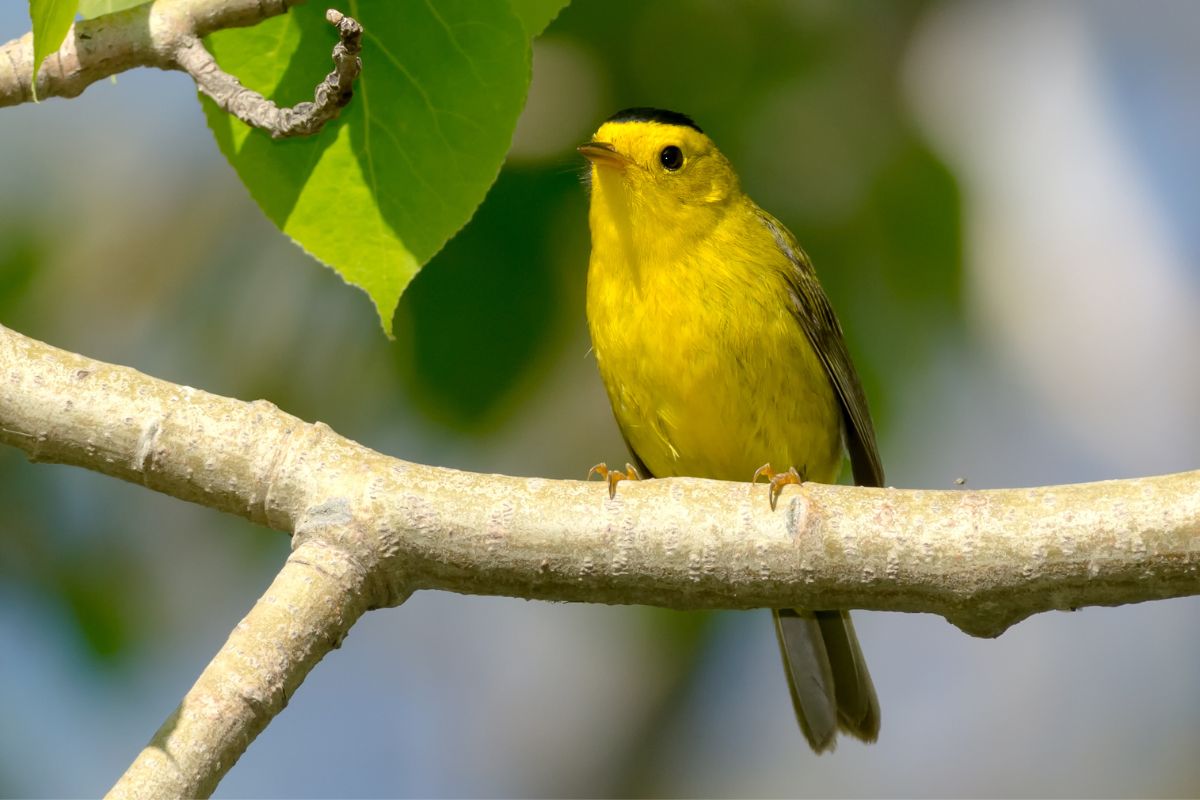 This small warbler primarily lives in Canada and the United States but travels to Mexico and Central America in the winter. It typically lives in open woodland, where it feeds off of insects and berries. One of the most distinctive things about this bird is its song, which consists of a series of long notes.

These chattering songbirds have the same yellow feathers as the goldfinch, but they’re shorter and slightly rounder. Wilson’s warblers usually measure between 3.9 and 4.7 inches. The longest-living Wilson’s warbler on record lived for eight years and 11 months. 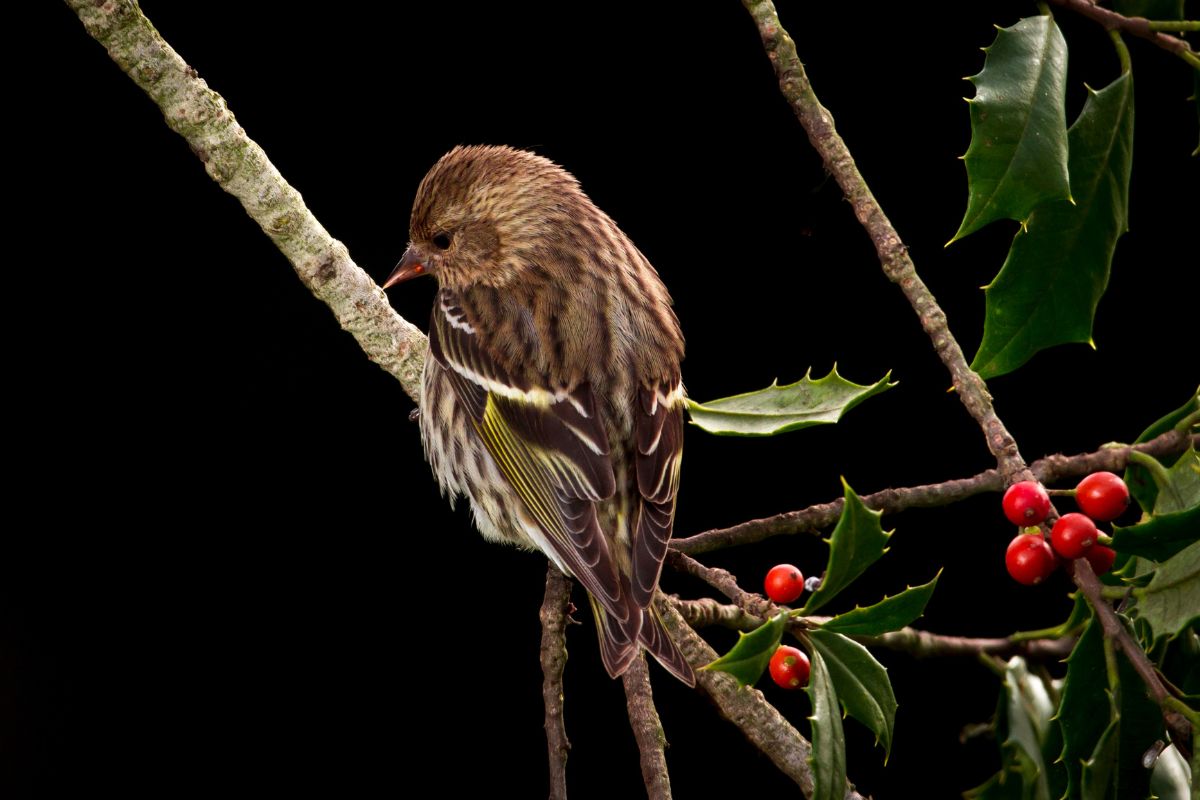 This North American finch is primarily found in Canada and the United States but may cross the border to Mexico during the winter. It thrives in mountains and forests, where it feeds off of cone seeds, plant parts, and insects. Pine siskins are primarily brown but have yellow patches throughout their body.

Not only do pine siskins and goldfinches share several physical characteristics, but these birds frequently flock together. Pine siskins measure between 4.3 and 5.5 inches, which is around the same size as the goldfinch, but they have distinctive white streaks on their wings. Most birds live between 3 and 6 years, but some birds have been recorded to live for as long as 9 years. 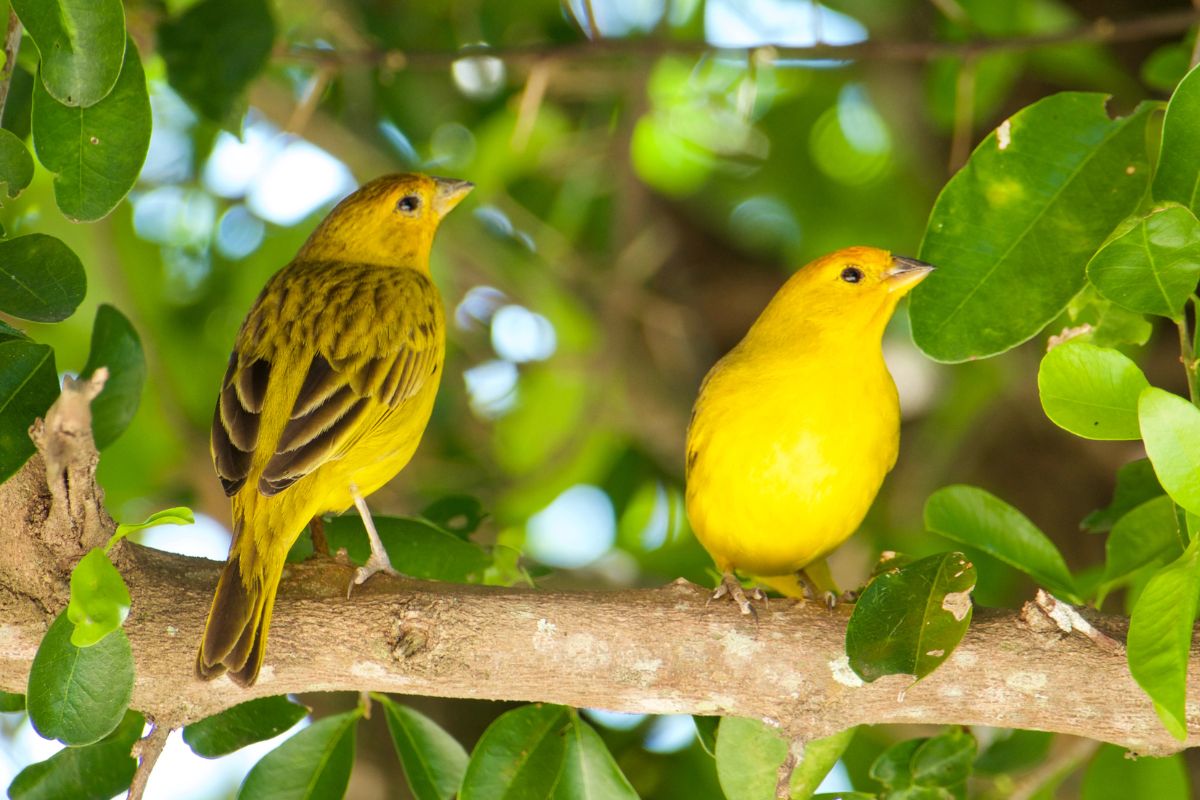 Sometimes referred to as a wild canary or a common canary, this small bird is native to the Canary Islands, from which it also takes its names. It can also be found in Maderia and the Azores and can be found in many habitats. While Atlantic canaries primarily feed on seeds, they may also eat small insects.

Goldfinches and Atlantic canaries are both songbirds with distinctive yellow feathers, and the two birds are also similar in size. However, the Atlantic canary is a territorial bird that is much more solitary than the goldfinch. It measures between 3.9 and 4.7 inches and can live for up to 10 years. 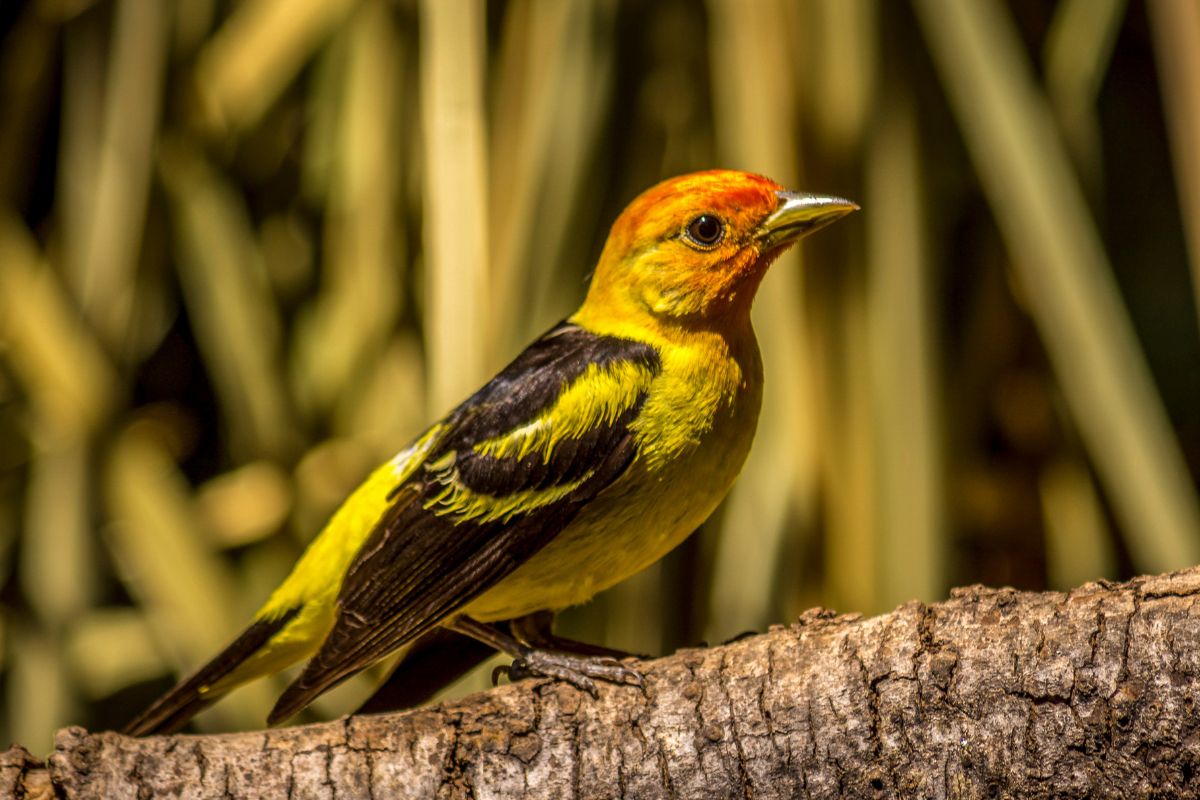 Western tanagers are songbirds that are primarily found in western North America. During the winter, these birds may travel to Costa Rica and Nicaragua. They mainly live in forests, where they eat insects, fruits, and berries.

These small birds are yellow with black and white wings, giving them a similar appearance to the goldfinch. However, the western tanager stands out thanks to its bright, orange-red head. It’s slightly larger than the goldfinch, with a length of 6.3 to 7.5 inches, and usually lives between 3 and 5 years. 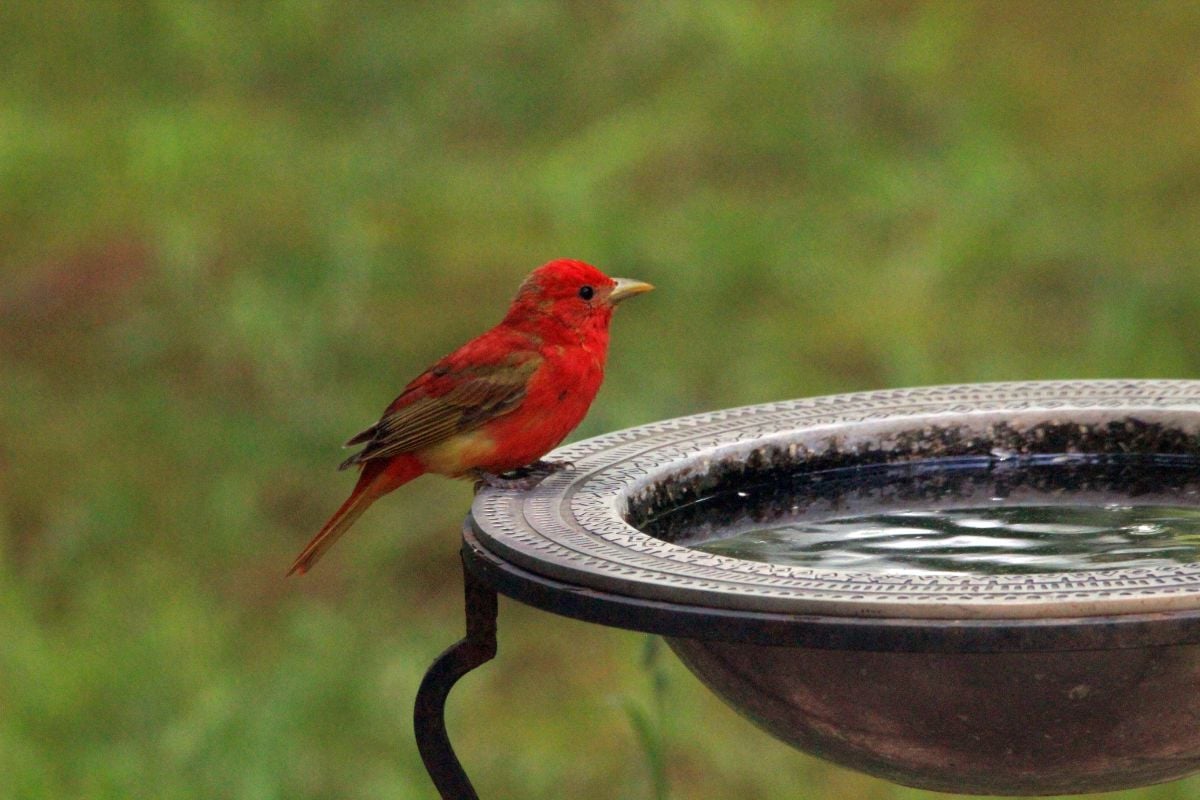 Summer tanagers live in open wooded areas throughout the southern United States. During the winter, the birds usually migrate to Mexico, Central America, and South America. They like to make their homes high in trees, where they can easily catch insects, but they’ll also feed on seeds and berries.

Male summer tanagers have deep red feathers, but females are yellow, causing them to sometimes be confused for goldfinch, even though they’re slightly larger, with a typical size between 6 and 6.5 inches. The birds are very vocal and will repeat the same melodic song throughout the day. The longest lifespan of a summer tanager on record is five years. 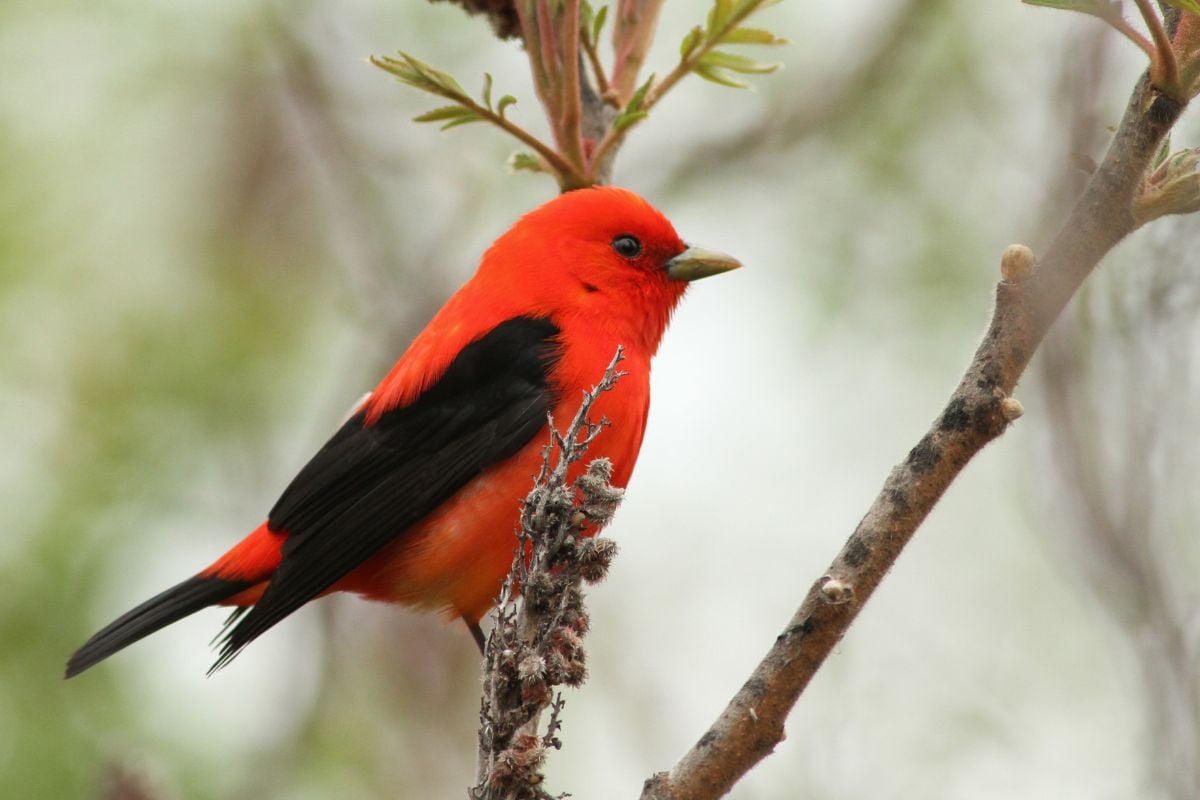 In spite of its name, the scarlet tanager is actually a canary, not a tanager. It’s native to North America and primarily breeds in forests throughout the eastern region of the continent. While the birds mostly live off insects, they’ll also eat seeds and berries when they have access to these foods.

The species is named for the bright red feathers found on male birds, but like summer tanagers, females are a golden yellow color. They’re slightly larger than goldfinch, measuring 6.3 to 7.5 inches. These birds can live for more than a decade, with at least one scarlet tanager with a recorded lifespan of nearly 12 years. 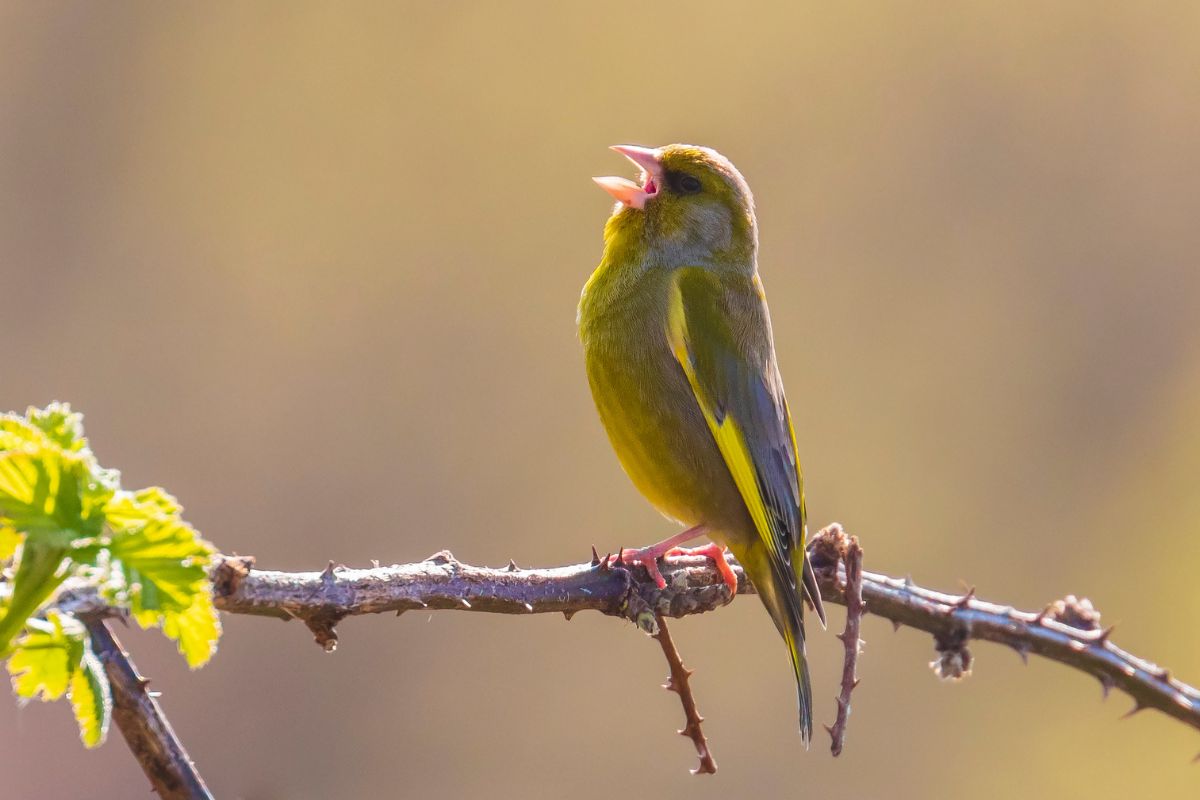 Greenfinches are small birds that can be found throughout Eurasia. While the birds often make their homes around the edges of forests, they can also be seen around farmland hedges and in gardens. The bulk of their diet consists of seeds, but these birds may also feed on berries when access to seeds is limited.

In spite of their name, greenfinches are a mix of green and yellow, which makes them look a lot like goldfinches. They usually range between 5.5 and 6.3 inches in length. While greenfinches are susceptible to parasites and diseases, they can still live for more than 7 years in the wild. 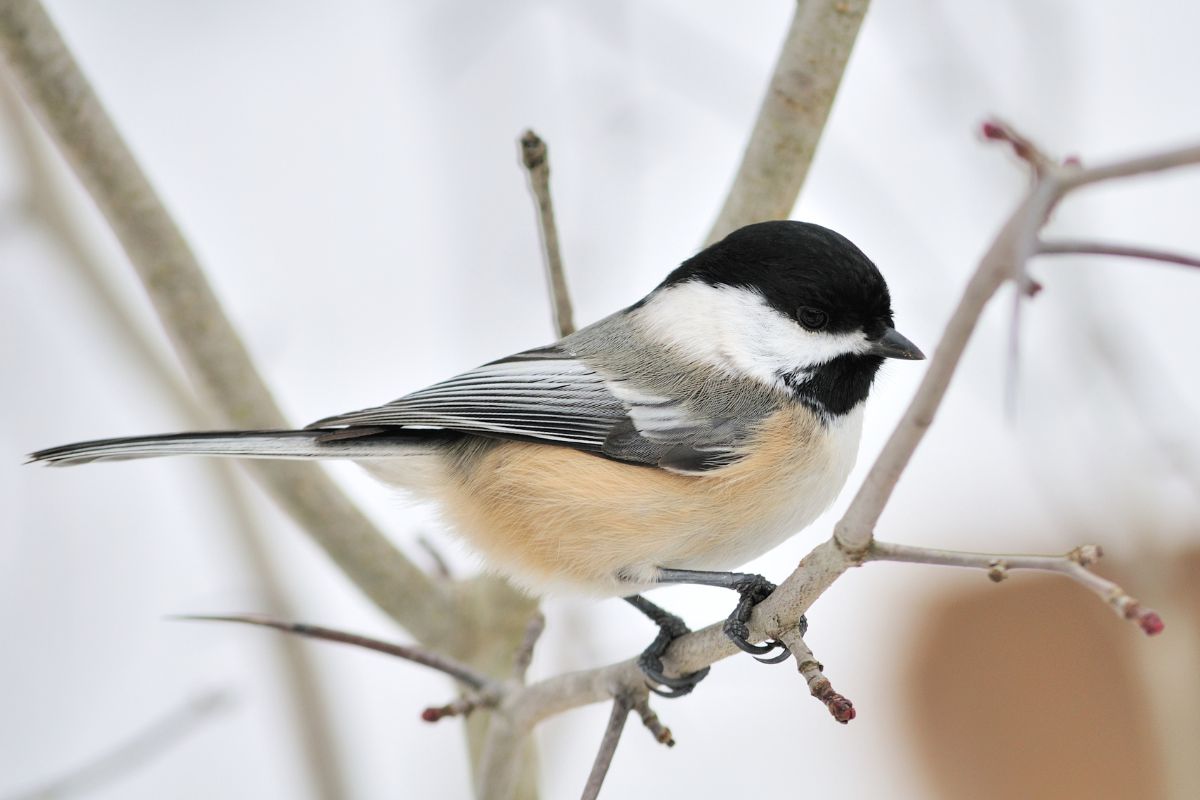 This North American songbird makes its home throughout forests in the northern United States and Canada. The bird is capable of lowering its body temperature during cold weather, which is why black-capped chickadees don’t migrate during the winter. During the summer, it mostly feeds off insects, but in the winter, the bulk of its diet consists of seeds.

It’s around the same size as the goldfinch, measuring between 4.1 and 6 inches. In line with its name, it has a black cap, along with black wings and a round white belly. Although the black-capped chickadee is visually distinct from the goldfinch, the two birds have very similar songs and vocalizations. 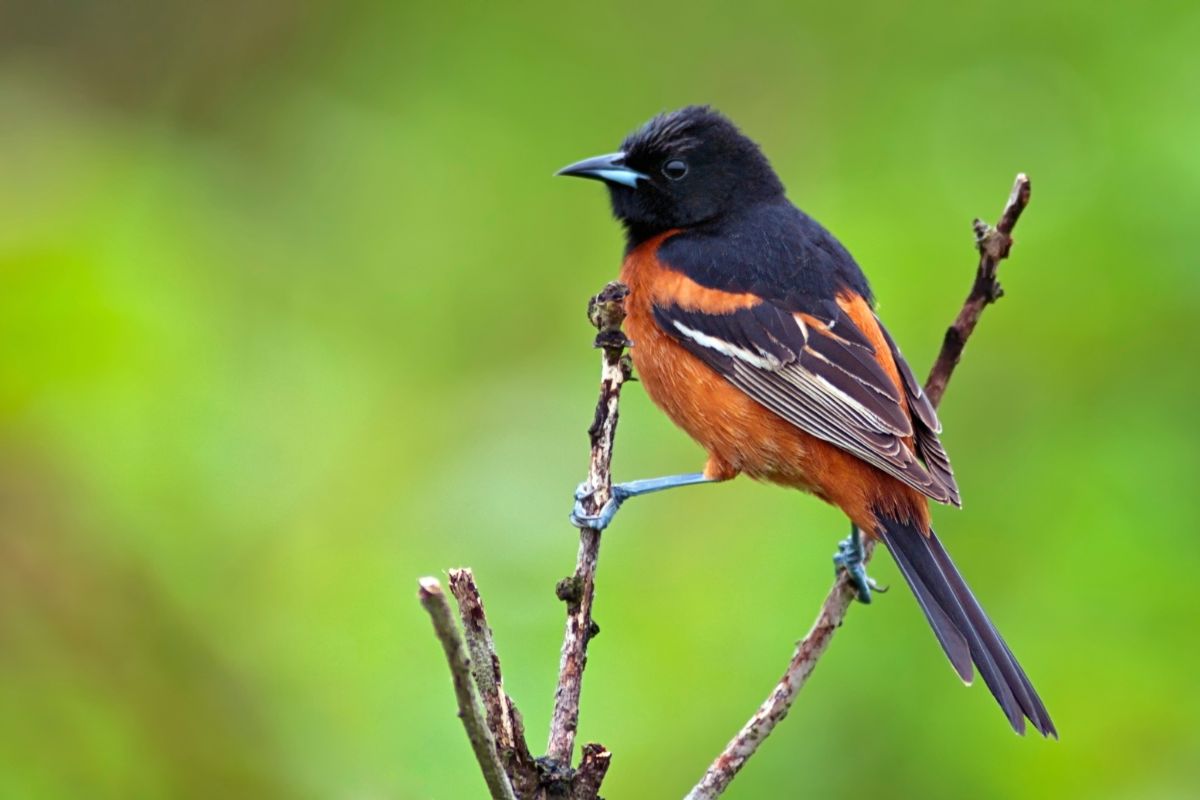 Orchard orioles make their home in shady forests throughout eastern North America. In areas where the bird’s habitat has been threatened, they can also be found in parks or near bodies of water. While they like to eat spiders and insects during the breeding season, they mainly feed on fruit, seeds, and nectar during the winter.

Male orchard orioles have a deep orange belly, with black feathers on their head. Females of the species look a lot closer to the goldfinch, with greenish yellow feathers and white markings on its wings. Most birds range between 5.9 and 7.1 inches in length and have been reported to live for more than a decade in the wild. 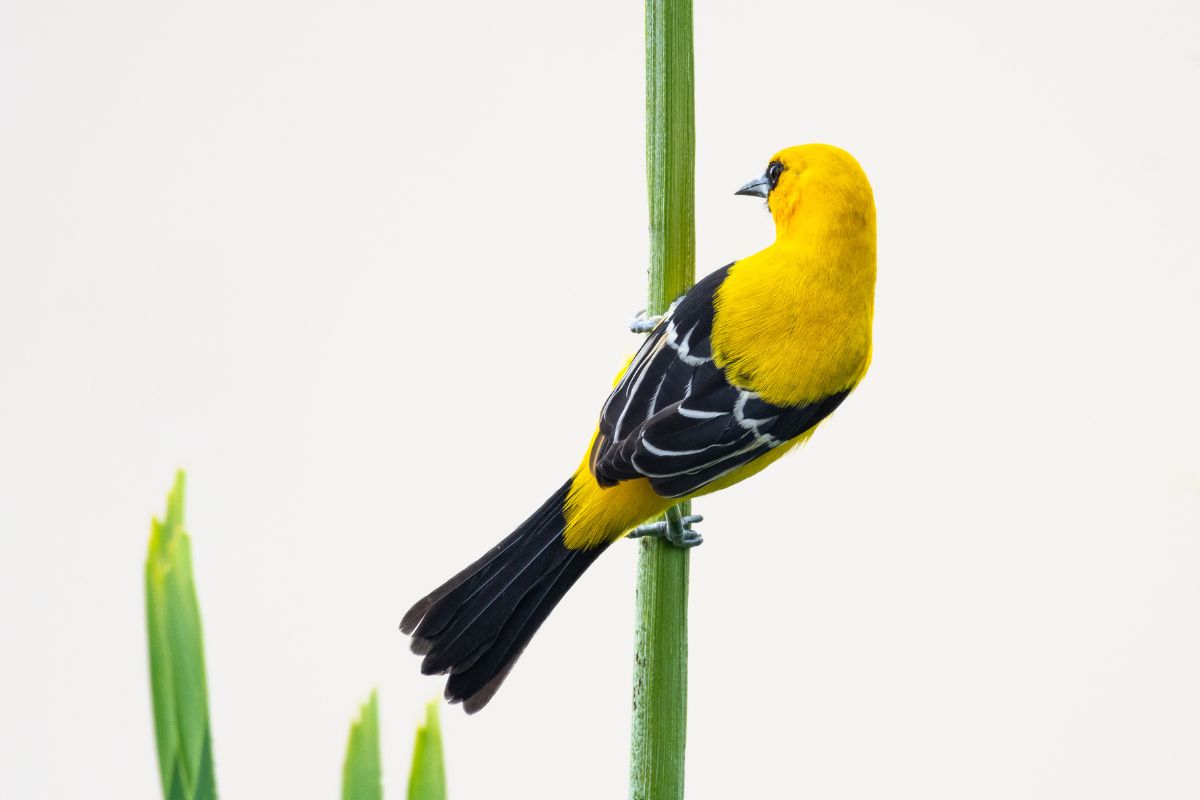 Yellow orioles can be found throughout South America and are especially common in Trinidad, Columbia, and Venezuela. They’re primarily found in open woodland, but they may also make their home in gardens. The bird tends to feed off of large insects, but it also eats berries, fruit, and nectar.

While yellow orioles have bright yellow feathers and similar markings to goldfinches, they’re larger, growing to be about eight inches long. Females of the species have slightly duller feathers, much like female goldfinches. It’s a robust bird with a surprisingly long lifespan, with many birds living for up to 11 years. 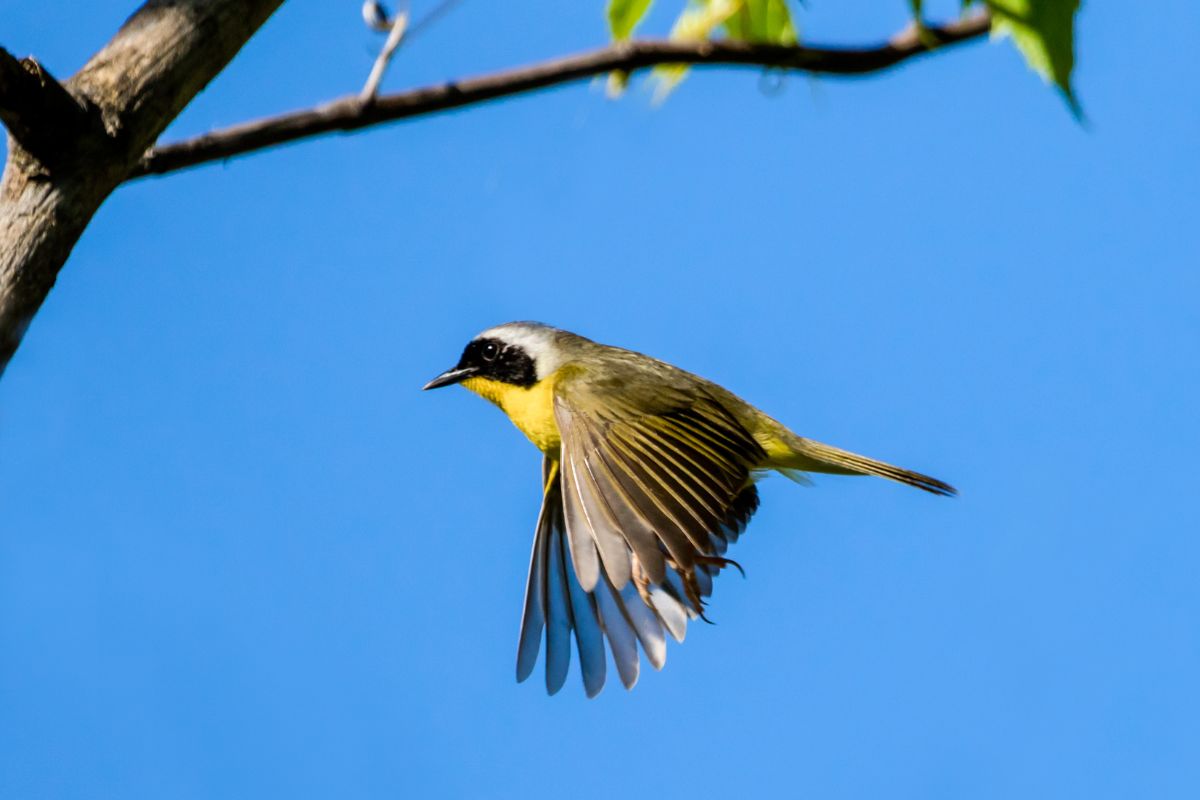 Sometimes referred to as the yellow bandit, this bird can be found all across North America. While the common yellowthroat can be found in drier climates, its preferred habitat is marshes and wetlands, where it hunts for insects in the thick vegetation. Migration routes for this bird can vary, but many birds are nocturnal migrators.

This small round songbird looks and sounds like the goldfinch, especially before it has fully matured. The bird has a yellow throat and chest with a white underside, but its wings and tail tend to be olive. It measures between 4.3 and 5.1 inches and can live for more than 11 years. 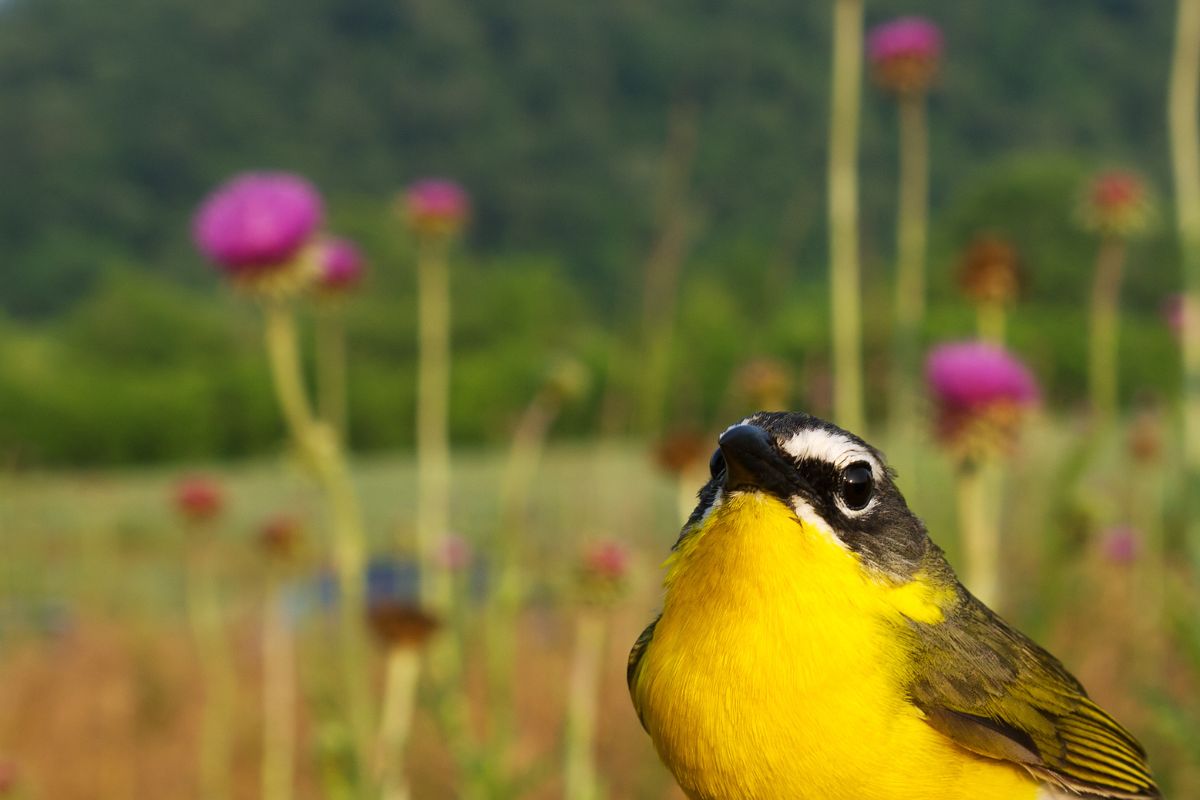 The yellow-breasted chat makes its home in areas with dense shrubbery across North America. Many birds of this species have had their natural habitat destroyed, which is why it can often be found in rural areas or on farmland. It’s an omnivorous bird that is happy to eat insects, seeds, and berries, which it often grabs with its feet.

This bird has the same yellow breast and white undertail that you’ll find on a goldfinch, but it’s larger in size, with an average length between 6.7 and 7.5 inches. While it’s common to hear the bird, it can be much harder to spot, since it’s drawn to places where it can hide. Most birds of this species will live between five and eight years.

Can Goldfinches Be Kept as Pets?

It’s illegal to keep goldfinches as pets in the United States. However, there are other types of finches, such as the zebra finch and the owl finch, that make excellent pets.

How Do Goldfinches Nest?

Female goldfinches weave nests from grasses and leaves. These nests are placed between the branches of trees.

Where Do Goldfinch Go During the Winter?

Goldfinches are migratory and typically travel to Mexico during the fall and winter. They fly back to the United States in the spring.