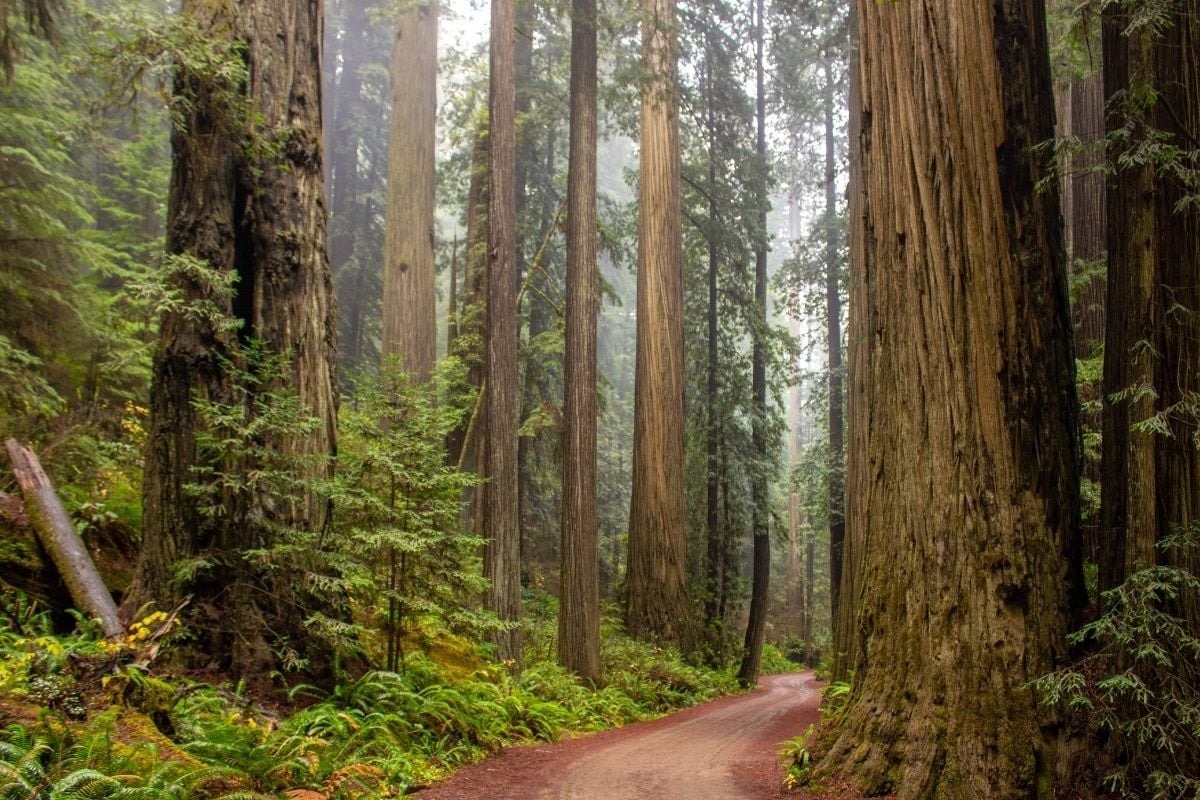 Depending on the variety, redwood tree roots can extend out for more than 100 feet. California or coast redwoods, giant sequoias, and dawn redwoods are nature’s three forest giants. I’ll never forget the classic scene in Alfred Hitchcock’s Vertigo where Madeleine (Kim Novak) and Scottie (Jimmy Stewart) are virtually dwarfed by the “Father of the Forest” sequoia.

What gives these trees such amazing growth potential and the ability to live for thousands of years? Let’s get to the root of this question together.

Contents show
Roots – Going The Distance
No Taproot Needed
How Do Redwoods Get Water?
It Takes A Grove To Grow A Redwood
The Three Types Of Redwood Trees
Dawn Redwood – Dinosaur Trees
Magical Redwood Roots
Think Of Them As A Little Tree-Surance
Vampire Sprouts – Rare White Redwood Trees 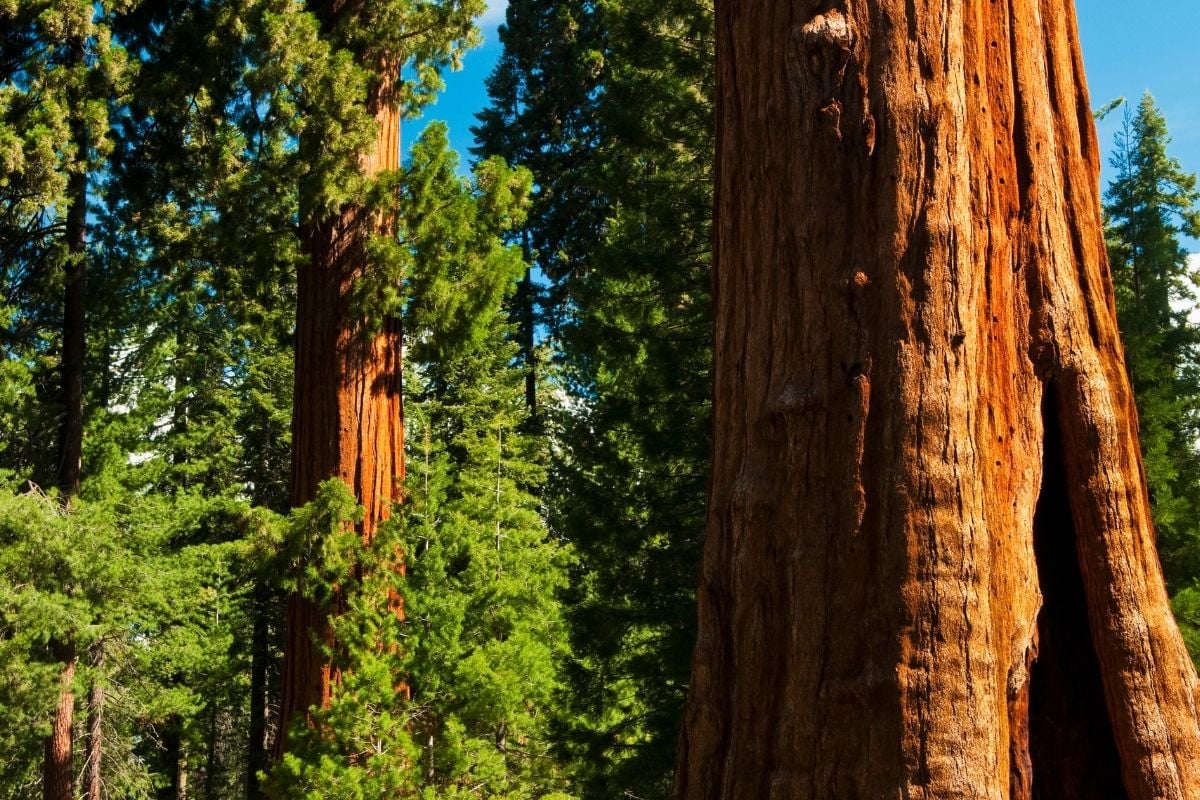 Redwood tree roots grow out, not down like other trees. You’ll find these systems extending only six to twelve feet deep, often with the bulk of the growth closer to three feet beneath the soil’s surface. At a glance, such shallow growth might not seem like it can support forest behemoths that can grow between one hundred and fifty and three hundred feet tall. 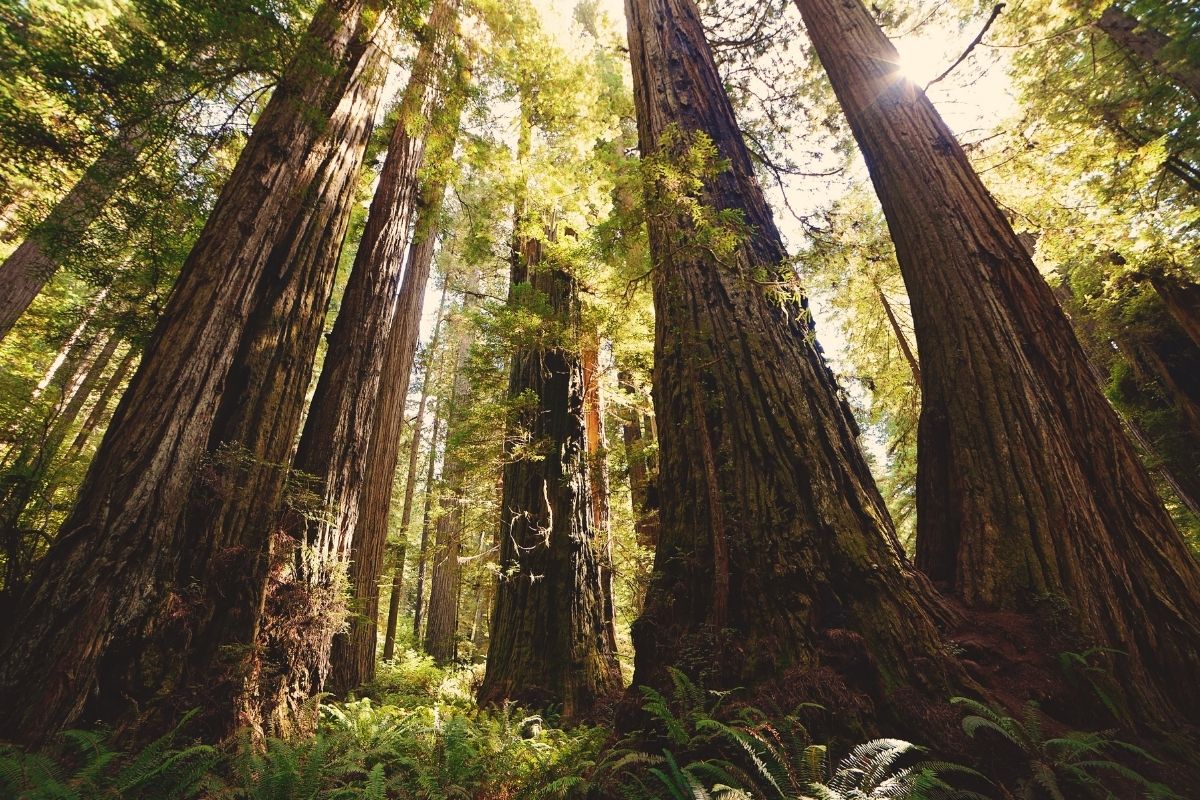 Unlike the thick taproot that becomes a carrot or the sometimes frustratingly long ones that support a dandelion, redwood seedlings don’t rely on these central, deep-diving anchors. That’s because their shallow root systems are able to get water and oxygen nearer to the surface of the soil where they grow.

See also  How Long Do Most Lakes Last?

How Do Redwoods Get Water?

Did you know that redwoods can make their own rain? Shallow roots mean these trees need a lot of moisture. Sure, groves along the California and Oregon coasts can count on winter rains, but they also “comb” fog during the summer months – collecting moisture on hanging branches and leaves and dripping it onto the soil.

According to plant ecologist Todd Dawson, these trees get between one-fourth and one-half of their water this way. If that isn’t cool enough for you, terpenes released from their leaves can also help condense moisture, creating cooling clouds.

It Takes A Grove To Grow A Redwood 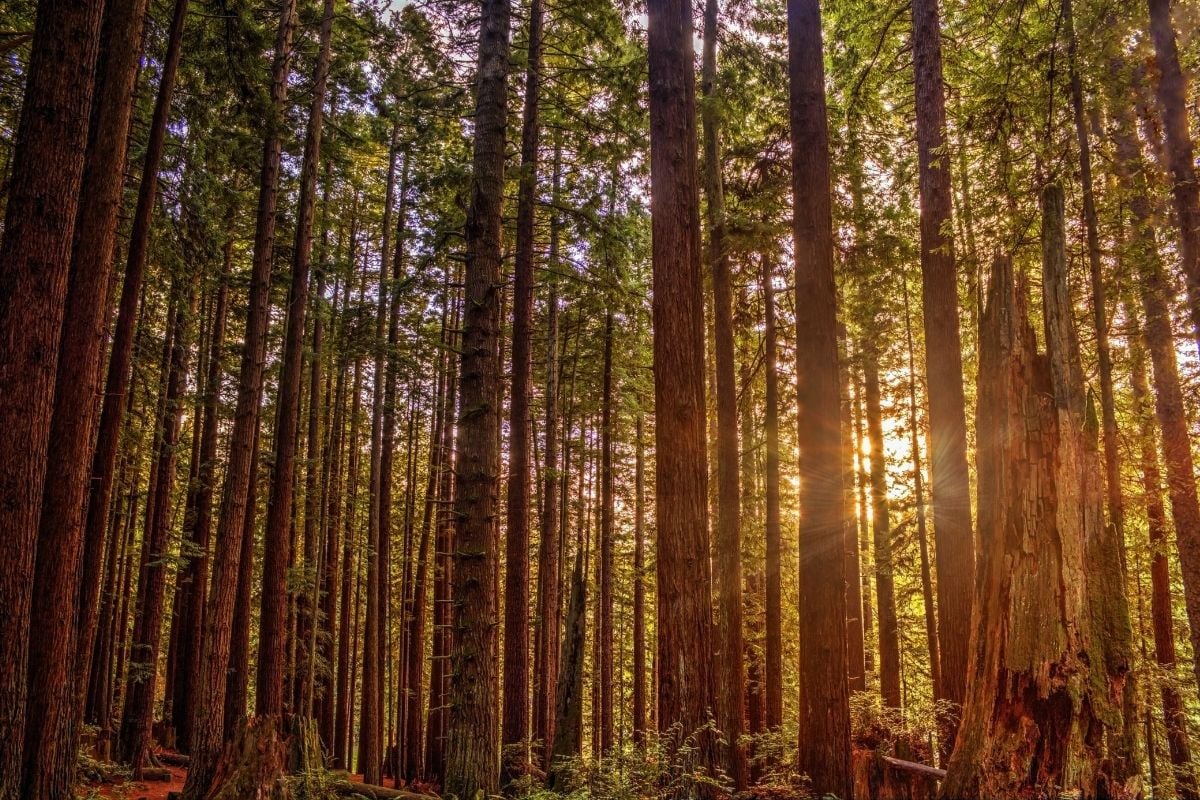 You’ve probably heard plenty of quotes and anecdotes championing the benefits of deep roots (any Tolkien fans out there?). Redwoods show us the advantages of shallow but far-reaching roots – they make it easier to get support from others. Instead of long, single fingers seeking out nutrients, you get networks of Californias, sequoias, or dawns intertwining beneath the soil.

This allows groves to share nutrients and strengthen each other during storms.

The Three Types Of Redwood Trees 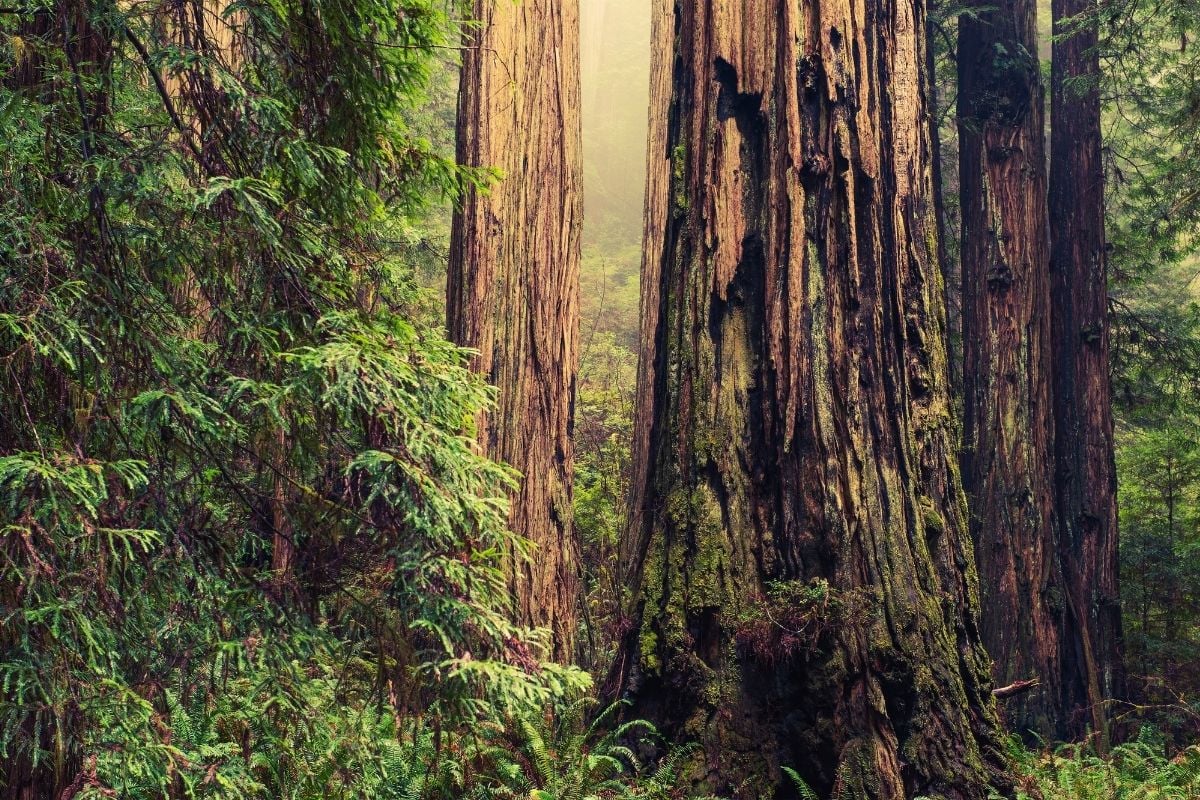 If crowns cresting between one hundred and three hundred plus feet aren’t testament enough to the efficiency of long, shallow root systems, the longevity of the dawn redwood just might. These trees were around during the Cretaceous period and were once thought only to exist as fossils until a small grove was discovered in China in the 1940’s. Now that’s staying power.

See also  Which Countries Have No Forests? 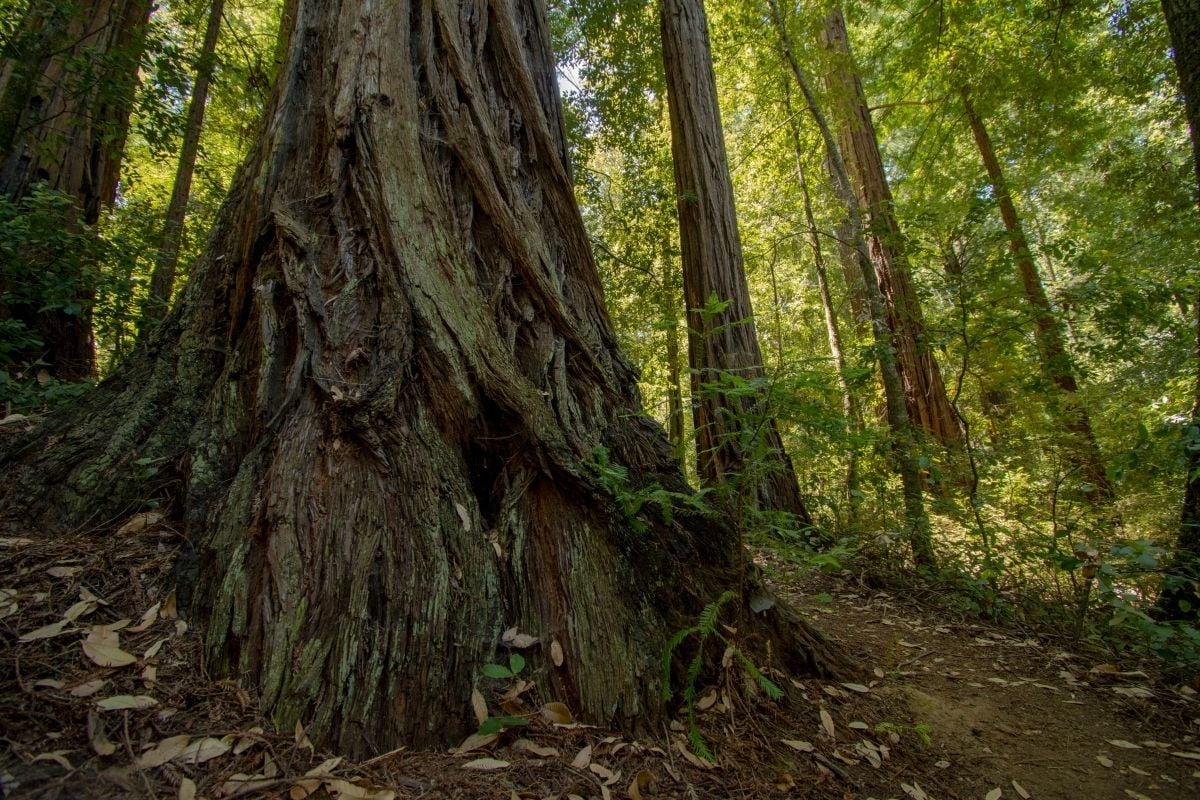 OK, so maybe trees that were around when pterodactyls were soaring through the skies and ancient redwoods with names like “Mother of the Forest” and “Hyperion” aren’t so impressive. Well, they are, but if you’re looking for even more redwood root magic, think about this. As these green giants grow, they nurture both clones of themselves that sprout from their root system and seedlings that benefit from the moisture and nutrients it provides.

Then, when the old tree dies, this circle of saplings flourishes, creating “fairy rings.”

Think Of Them As A Little Tree-Surance

According to the UC Davis Arboretum, redwoods aren’t as susceptible to fires or floods, either. Where floodwaters might bury and suffocate other types of tree roots, a redwood will simply sprout new roots where oxygen is more plentiful. When your reach is as far as three hundred feet (in the case of the giant sequoia), you have a lot of options for new growth.

A mind-blowing example of this phenomenon is Founders’ Grove, where some trunks survive beneath twenty feet of alluvial flats mud. More roots are simply added nearer to the surface to keep the tree growing. In the case of fire, these trees also persevere. 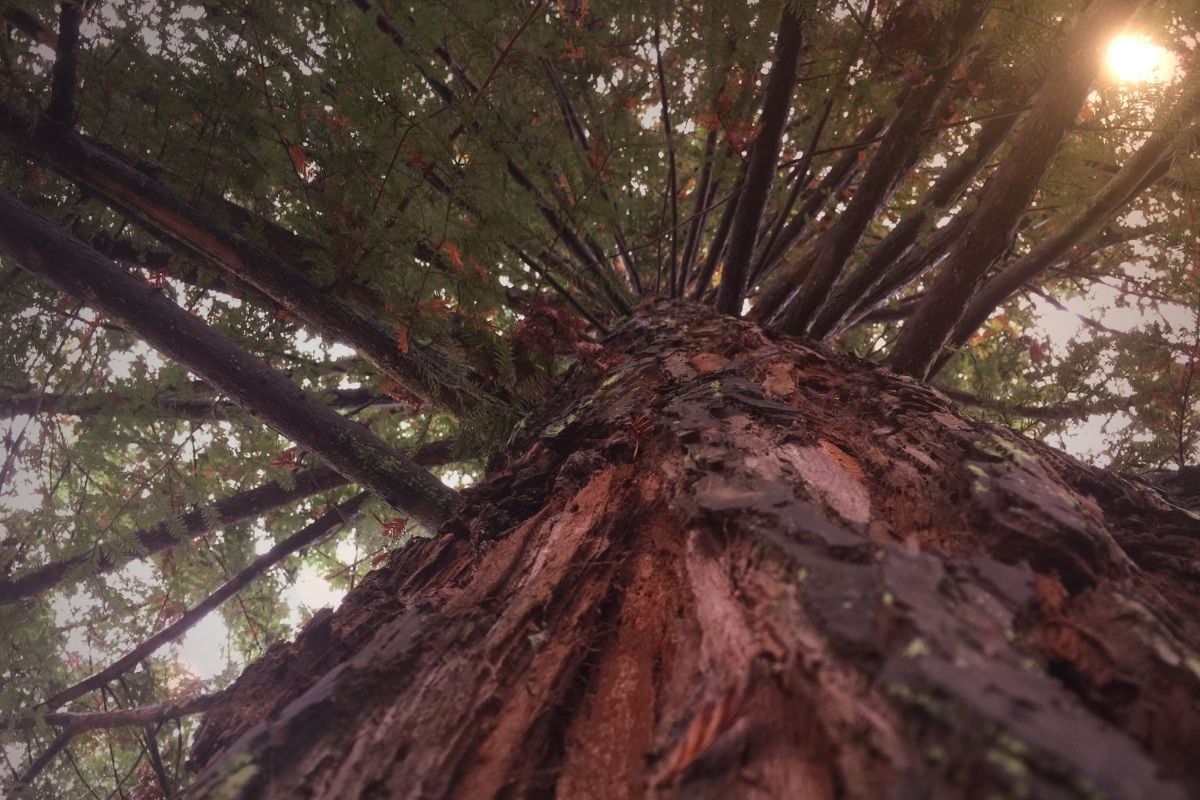 Redwood roots can also become home to ultra-rare albino redwood trees. According to historian Sandy Lyndon, genetic mutations prevent the plant from producing the pigment it needs to photosynthesize nutrients from light. So, they have to live off the parent tree’s root system to survive.

You might even call the 25 “ghost trees” known in existence zombie trees. During droughts, the parent tree will withdraw support, causing the sprout to shrink, but they flourish once rainfall is good again.