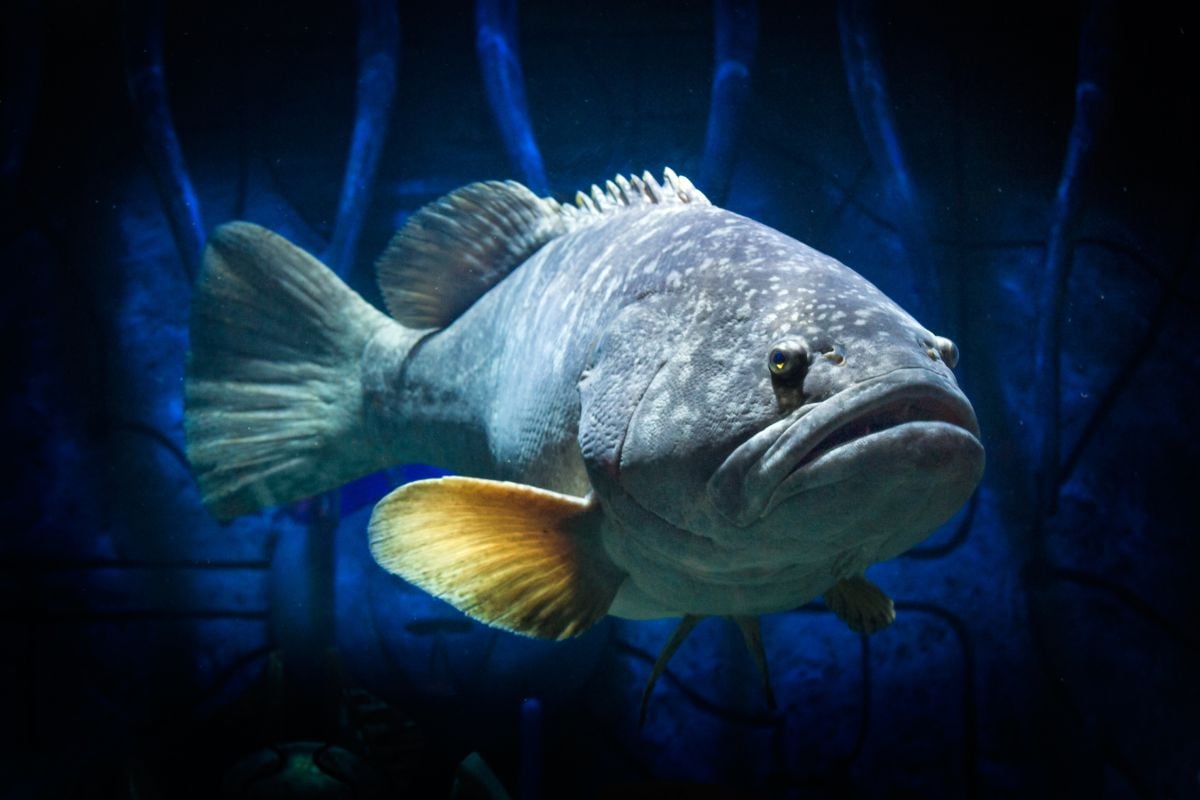 The name “grouper” refers to a variety of different fish with similar characteristics. Since groupers tend to grow to large sizes, they usually live in larger bodies of water. The exact size of groupers varies between specific types.

Red, black, yellow, olive, and brown are common colors for groupers. On the inside, groupers are white fish. They have a mild taste that has pleased the palettes of a variety of cultures.

Generally, groupers can grow up to a length of 10 feet and weigh in at an excess of 1,000 pounds. Their diets mostly consist of other smaller fish, crustaceans, and squid. In the wild, groupers’ age limits vary based on the environment, fishing practices, and the number of predators that seek them.

In captivity, groupers can live over 30 years in ideal conditions with solid health. 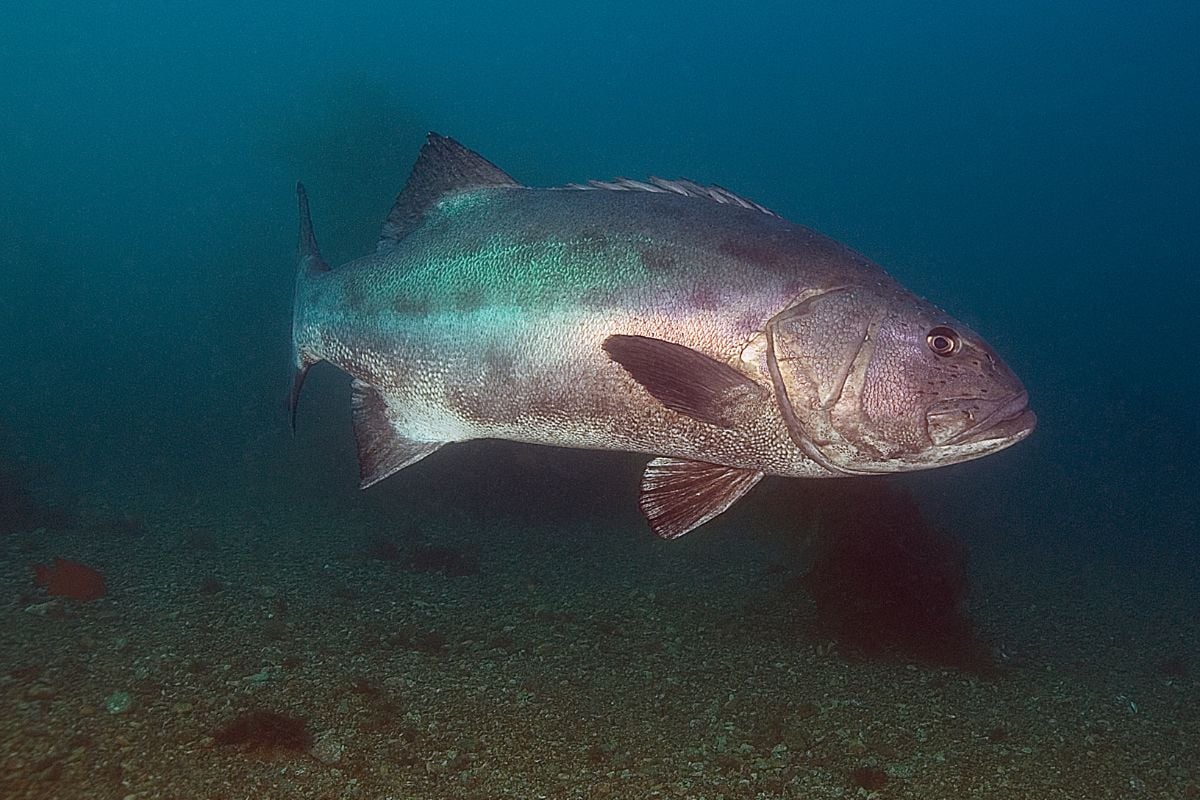 If you like grouper’s mild flavor, you’ll enjoy black sea bass as a substitute. Black Sea Bass are similar to groupers in a culinary sense based on their taste and popularity. Outside of the kitchen, black sea bass live in the sea.

In North America, you can find black sea bass along the eastern coast of New England. They tend to live 10-12 years in the wild. They weigh under 4 lbs for the most part and measure 25” maximum.

The black sea bass enjoys a steady diet of shrimp, mussels, and other sea creatures. Their predatory nature makes them voracious eaters. Differences between groupers and black sea bass lie in their size and the variety of their species. 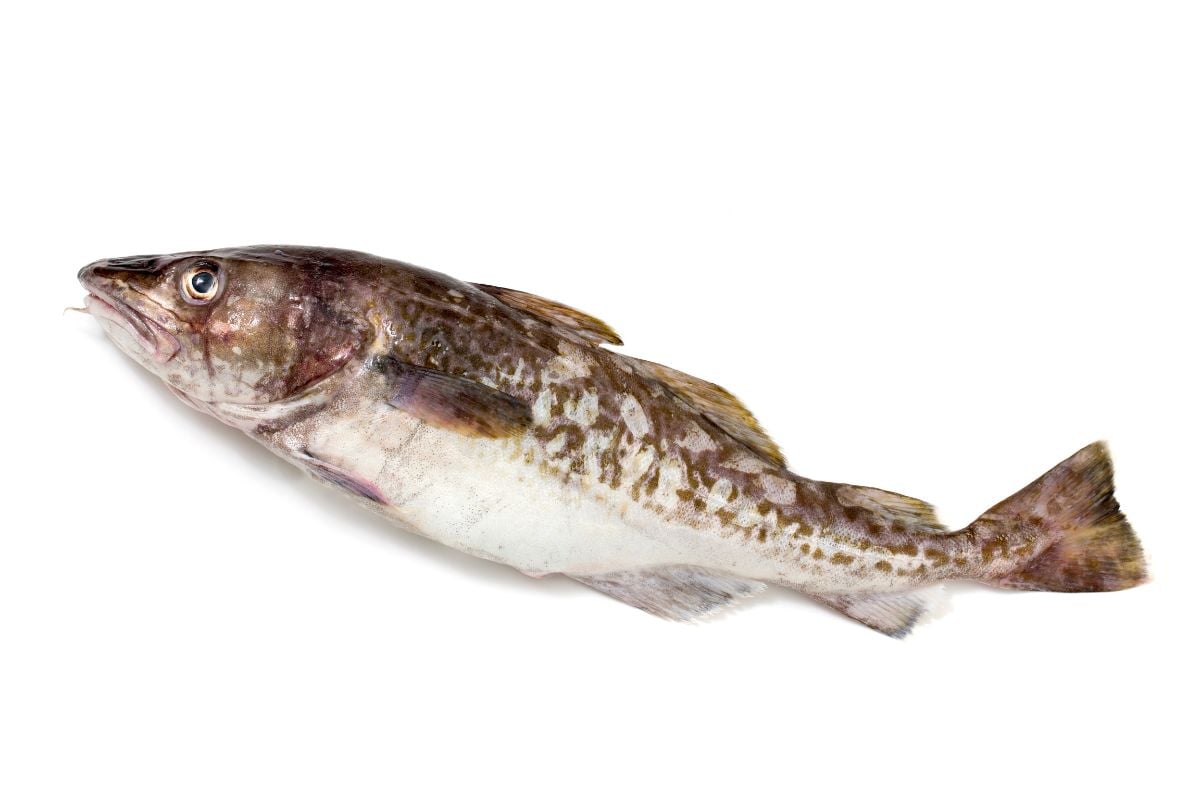 Cod Fish are torpedo-shaped silverish gray fish (sometimes with deep green coloration). Cod tend to be neither large nor small for fish. They range from 2 feet to 4 feet in length.

Most cod weigh about 30 pounds but some can rank at the other end of the scale at about 90 pounds. The largest cod ever recorded weighed above 200 pounds and measured 6 feet in length. For food, cod prefer preying on other fish. 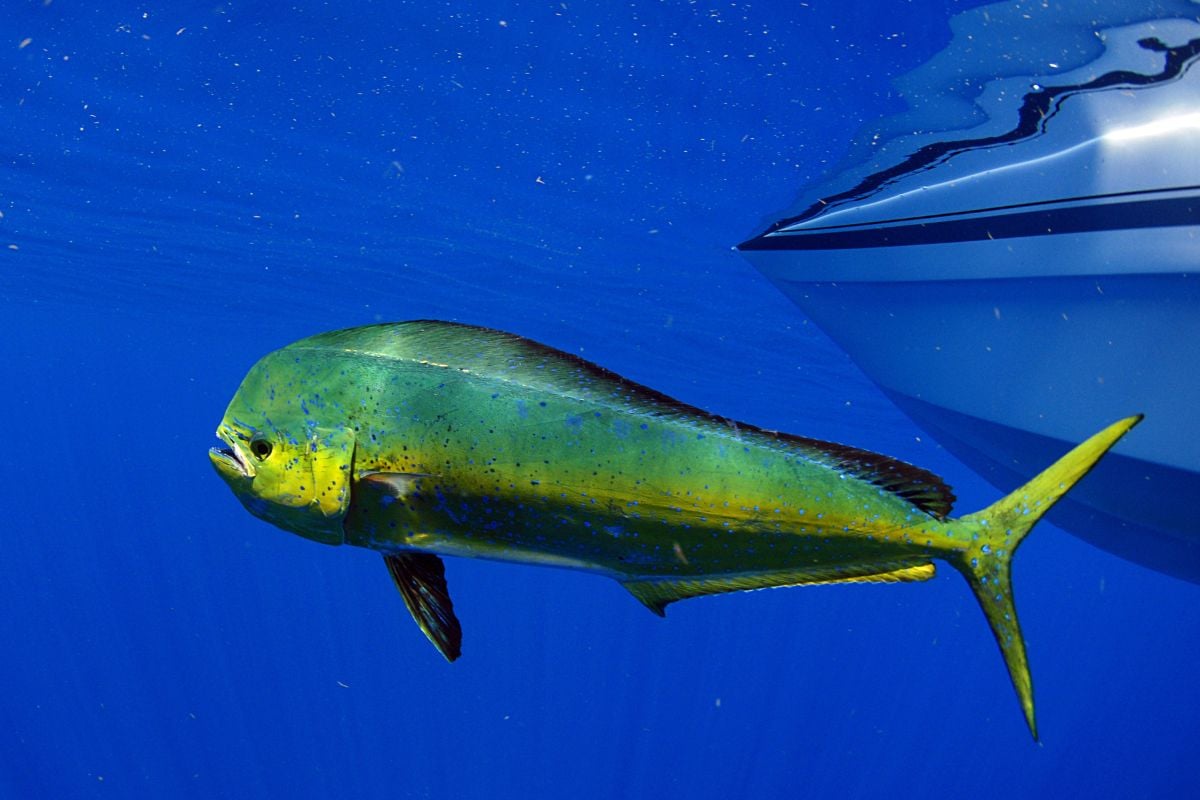 Mahi Mahi, also known as “Dolphin fish” based on their similarity to dolphins, are another fish that is similar to groupers. These brightly colored fish boast electrifying aquamarine scales with gold or silver patches. Mahi Mahi lives up to five years in the Atlantic Ocean, Caribbean, and the Gulf of Mexico.

Mahi Mahi are large fish, weighing up to about 90 pounds and measuring up to 7 feet in length. They feast on a range of fish at the ocean’s surface. Differences between Groupers and Mahi Mahi include the Mahi Mahi’s bright coloring, dolphin-type body, and relatively short life spans.

Mahi Mahi are also usually less expensive to purchase raw and at restaurants than Groupers. Similarities that Groupers and Mahi Mahi share include their white interior, large size, and delicious flavor. 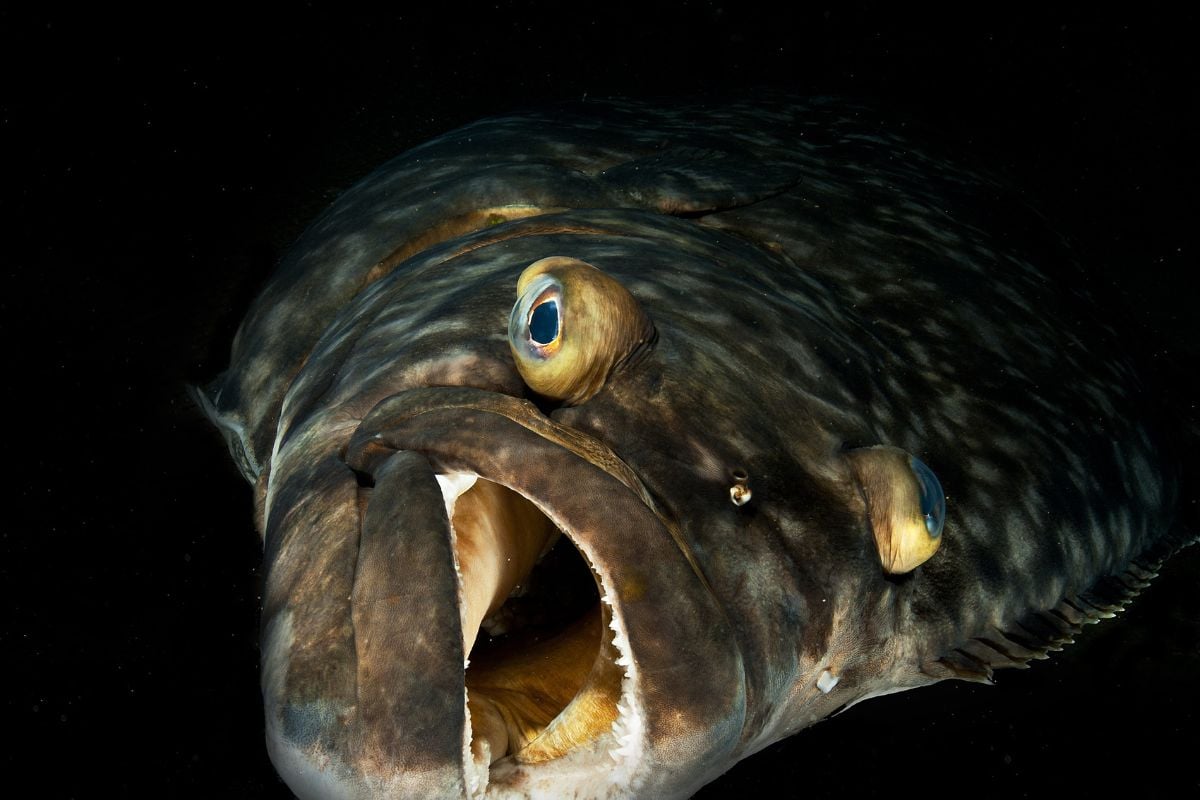 Halibut are distinctly diamond-shaped with flat bodies. Their flat figures put them in a group of fish called “flatfish.” Halibut are one of the largest flatfish.

They can grow over 8 feet in length and expand to roughly 500 lbs. These massive fish range in color from dark brown to mottled gray. Halibuts mostly live on the Alaskan coast of the United States and make their way up the coast to California.

They live for 25-55 years. Groupers and halibut share the similarities of large size, mild taste, and greyish brown coloring, and Halibut and groupers differ in their shape since halibut are flat fish. Groupers also have a larger range of regions where they dwell.

Finally, groupers are less predatory than halibut and have more enemies in the ocean. 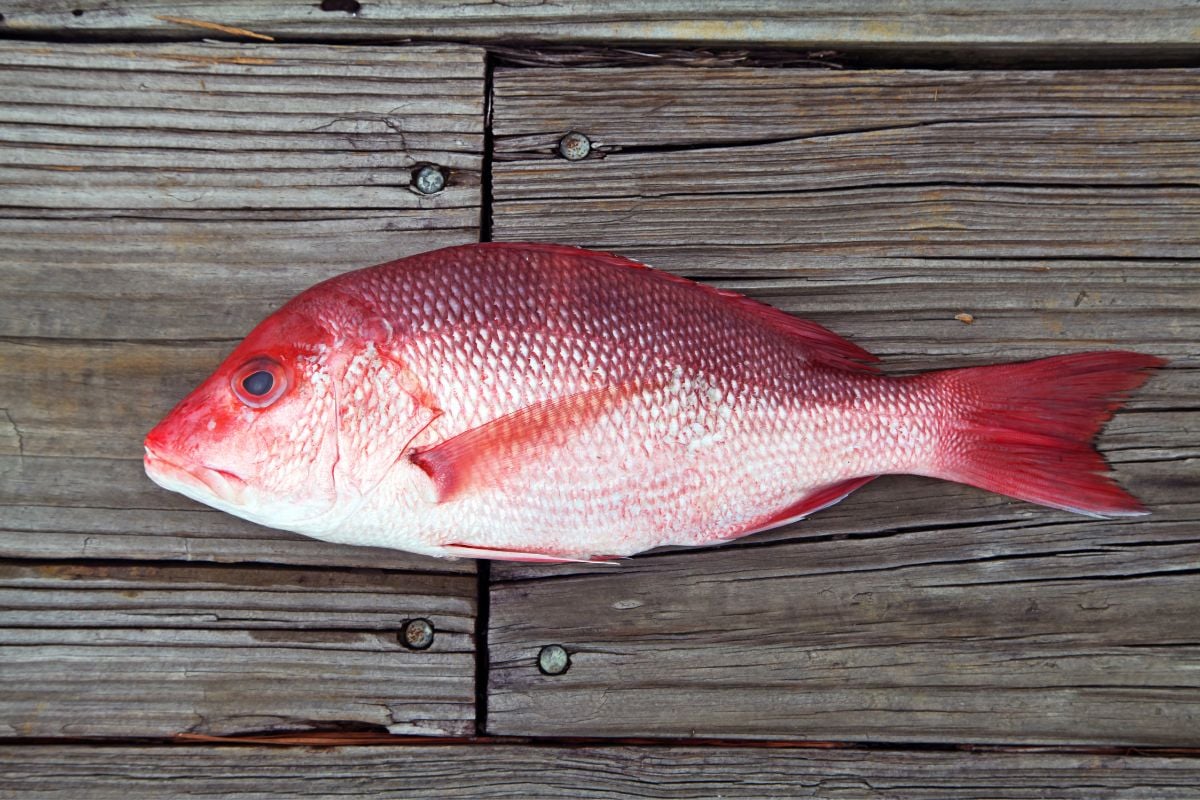 If you want a lean, juicy fish similar to grouper, red snapper is a great choice. Based on the name, you can probably guess that red snappers are, well, red. They can extend to up to 40 inches in length and weigh up to 50 pounds.

The oldest recorded red snapper reached 57 years of age. Red snappers live around the Gulf of Mexico and South Atlantic Ocean. These fish enjoy a steady diet of other fish, shrimp, worms, octopus, plankton, and worms. 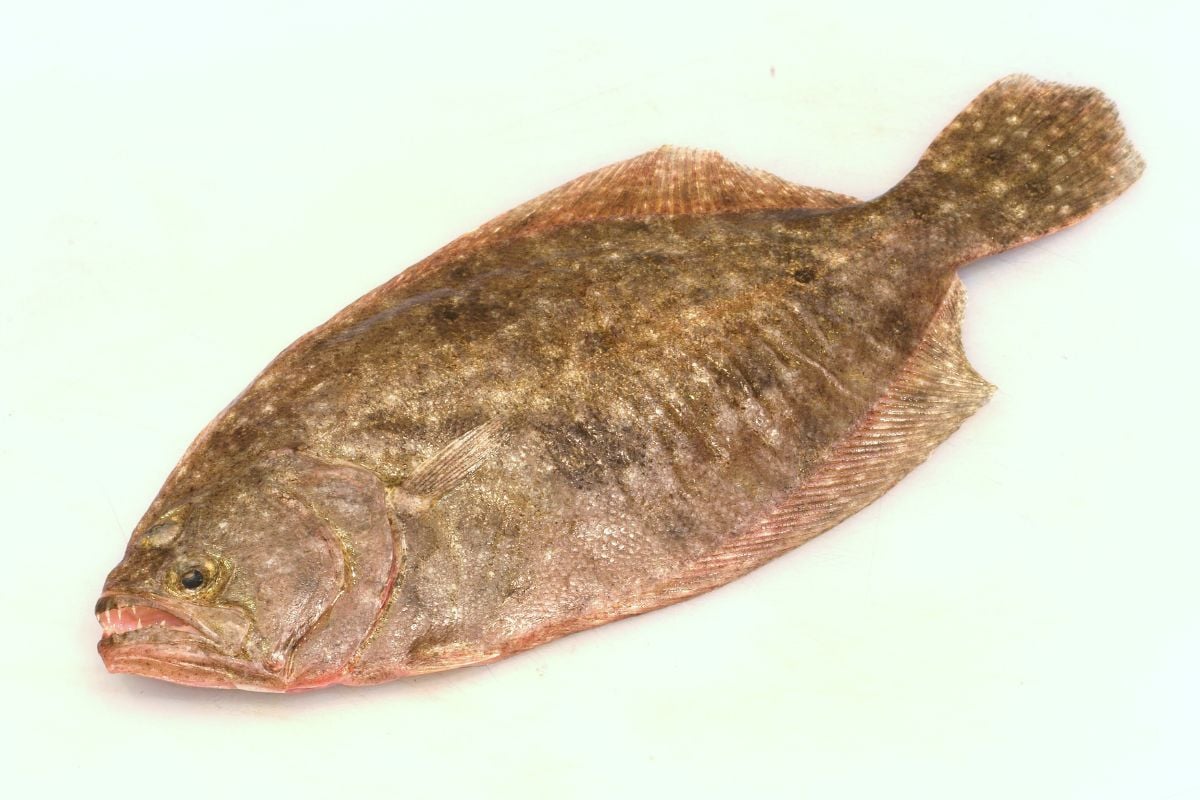 Similarly to hallibut, this kind of flounder has both eyes on one side of the body. They live along the coast of Northern California and flow into the Bering Sea. These fish feast on pink shrimp, krill, cod, herring, and pollock. 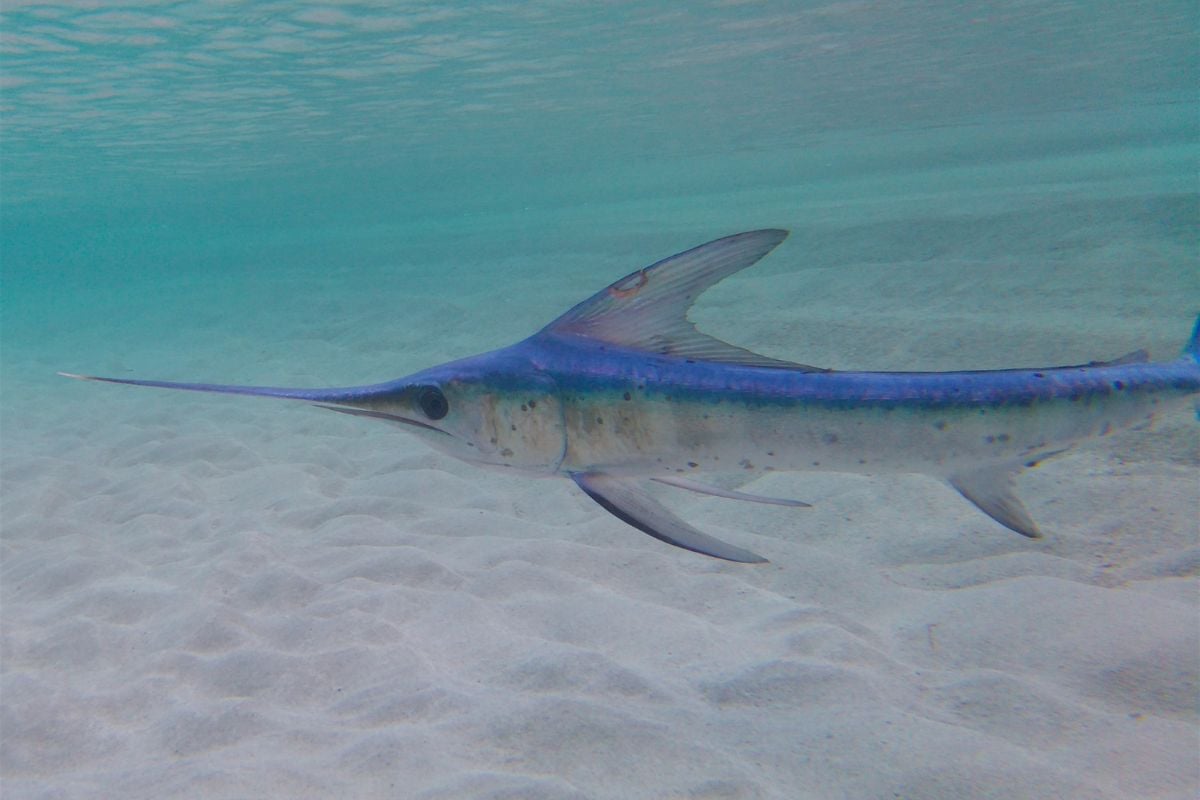 While swordfish might look completely different from groupers on the surface, they do share some similarities. Swordfish’s long, flat sword-like noses are just one feature out of many of these fish. Their black or brown tops fade to lighter shades on their lower half.

These fish grow as quickly as they swim. As the fastest predator in the ocean, they are surprisingly large, clocking in at up to 1,160 pounds. They tend to weigh between 50 and 200 pounds on average.

They live for up to 9 years in the North Atlantic and the Caribbean. They eat a wide range of fish as one of the ocean’s top predators. Similarities between groupers and swordfish include their large size and delicious white flesh.

See also  Do Flamingos Live in the Rainforest?

Differences include Swordfish’s special features like their unique eye muscles and their heat exchange system. Swordfish feed on a variety of fish and invertebrates such as squid. 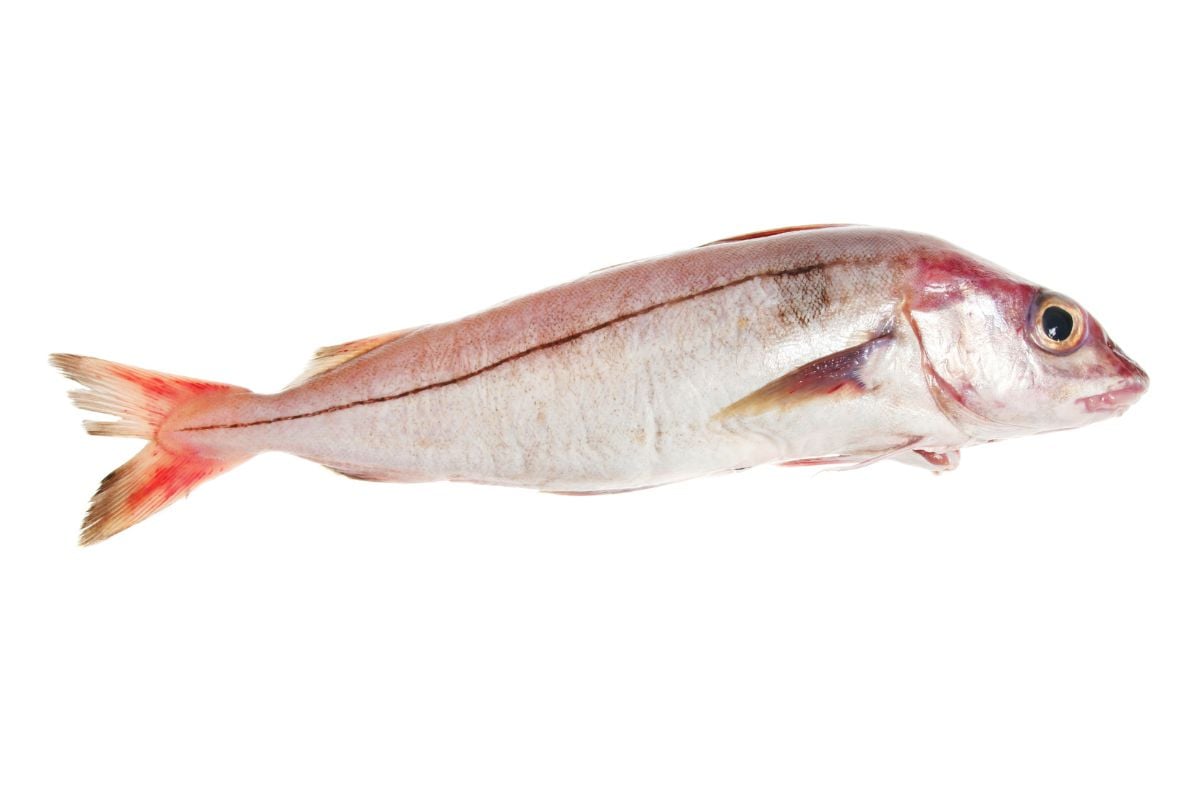 Related to Cod, Haddock tend to weigh less than their Atlantic Cod counterparts. While they’re part of the same family as Atlantic Cod, they’re easy to tell apart. They have a black smudged mark on both sides of their bodies.

Haddock grow up quickly to their maximum 1 foot to 3 feet in length. While they can live for over a decade, they tend to live for 3 to 7 years in the wild. Usually, Haddock are small fish, weighing in at 2 to 7 pounds.

Haddock’s diet consists of mollusks, crustaceans, sea urchins, and more. While Haddock lives at both ends of the North Atlantic Ocean, they tend to congregate heavily in the Gulf of Maine and Georges Bank. They share Groupers’ mild white coloring in their flesh and a sweet, slight flavor.

The difference between Groupers and Haddock lies in their size. Groupers are far larger than Haddock. Also, Haddock has a unique coloring that makes them different from groupers.

With their silverish blue coloring and white belly, catfish are clearly different than groupers. They also have their famous “whiskers” (called “barbels”), which distinguish them from other fish. What’s more, blue catfish lack scales.

Blue catfish live in rivers such as the Missouri River, Ohio River, Mississippi River, and the Rio Grande. They live for up to 28 years, but they usually die around 9-10 years of age. They eat most kinds of seafood and interfere with some populations. 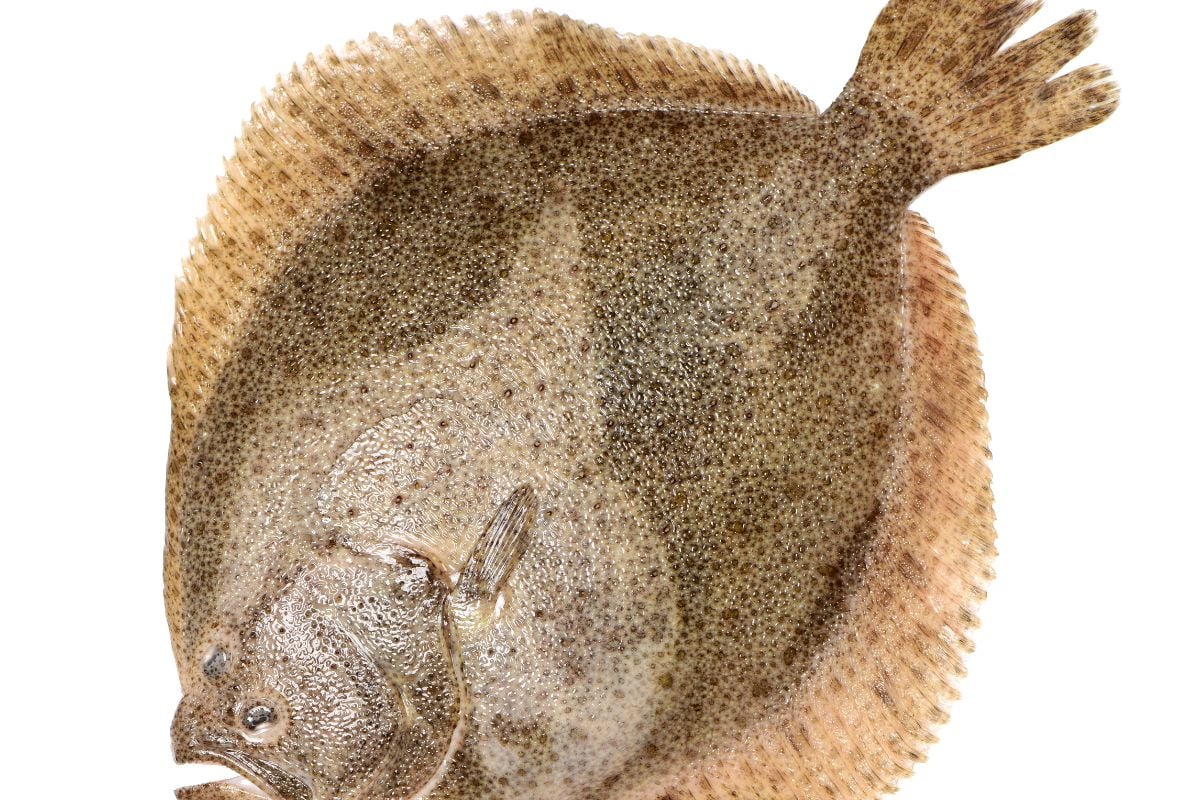 Related to Pacific halibut, Greenland turbot is a flatfish. Usually, these fish have yellow or gray-brown coloring and pale undersides. Their big mouths and matching big teeth allow them to eat a lot in their early years.

This makes them fast-growing fish. The Greenland Turbot can grow as big as 25 pounds. They live up to 21 years.

Groupers are not flatfish, which makes them different from Greenland turbots. 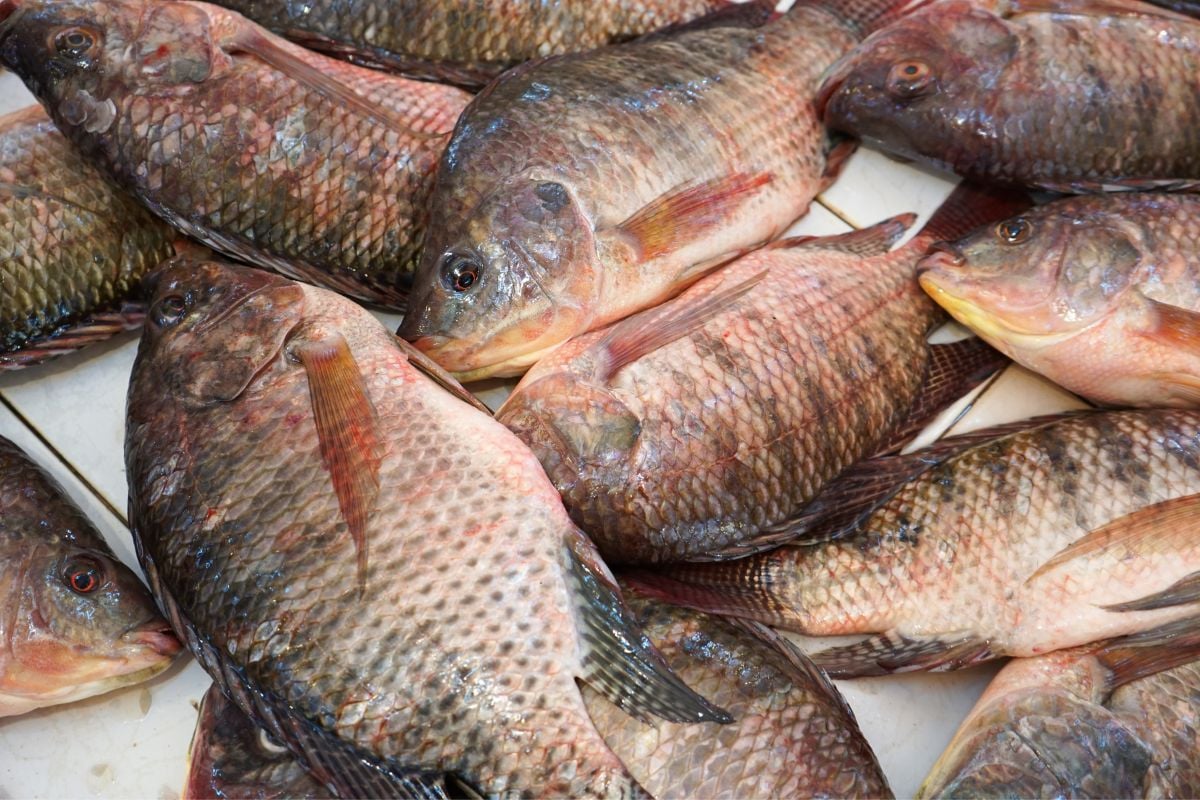 Related to the African Ciclid, Tilapia are a freshwater fish that is popular for their light flavor. Angolian Tilapia can grow to lengths as large as 8 inches. While this might seem small, for those keeping them in a tank, it’s pretty big.

Tilapia eat a wide range of foods, from plants to other fish to insects. Occasionally, they’ll even ingest algae to add balance to their food. Tilapia live up to ten years and weigh up to ten pounds in the wild.

Additionally, Tilapia are easier to keep as fish in tanks. If your main goal is maintaining a fish tank, Tilapia could be a better choice. 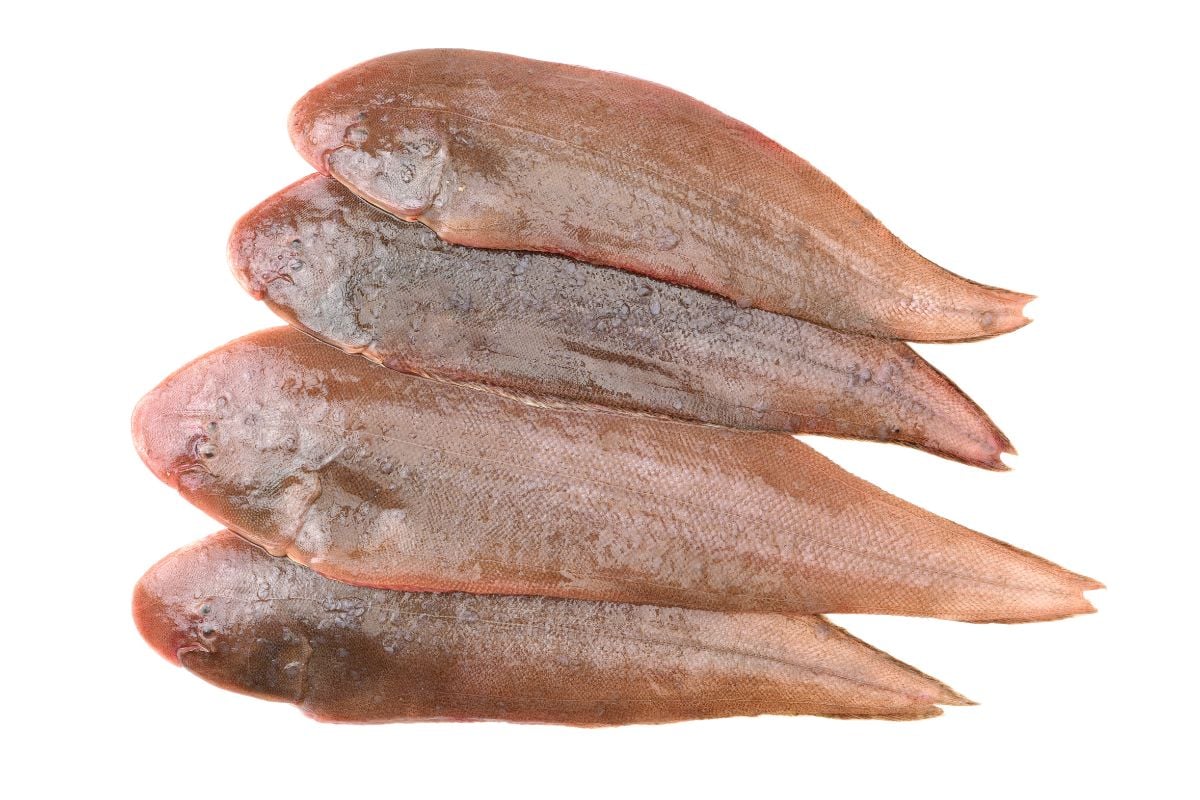 Another popular flatfish is called “Rock sole.” These fish migrate both eyes onto the right side of their skull as they age. Rock sole’s coloring depends on their location.

Those located in the north have white undersides with creamy notes, while southern rock soles have white underbellies with glossy patches. Because of their rough back scales, rock soles are sometimes also called “roughback.” They can grow up to 2 feet in length.

Rock soles usually live from Puget Sound through the Aleutian Islands and the Bering Sea. Their territory extends to the Kuril Islands, which sit to Japan’s north. Southern rock sole soles live in the southeast Bering Sea and span to Baja California. 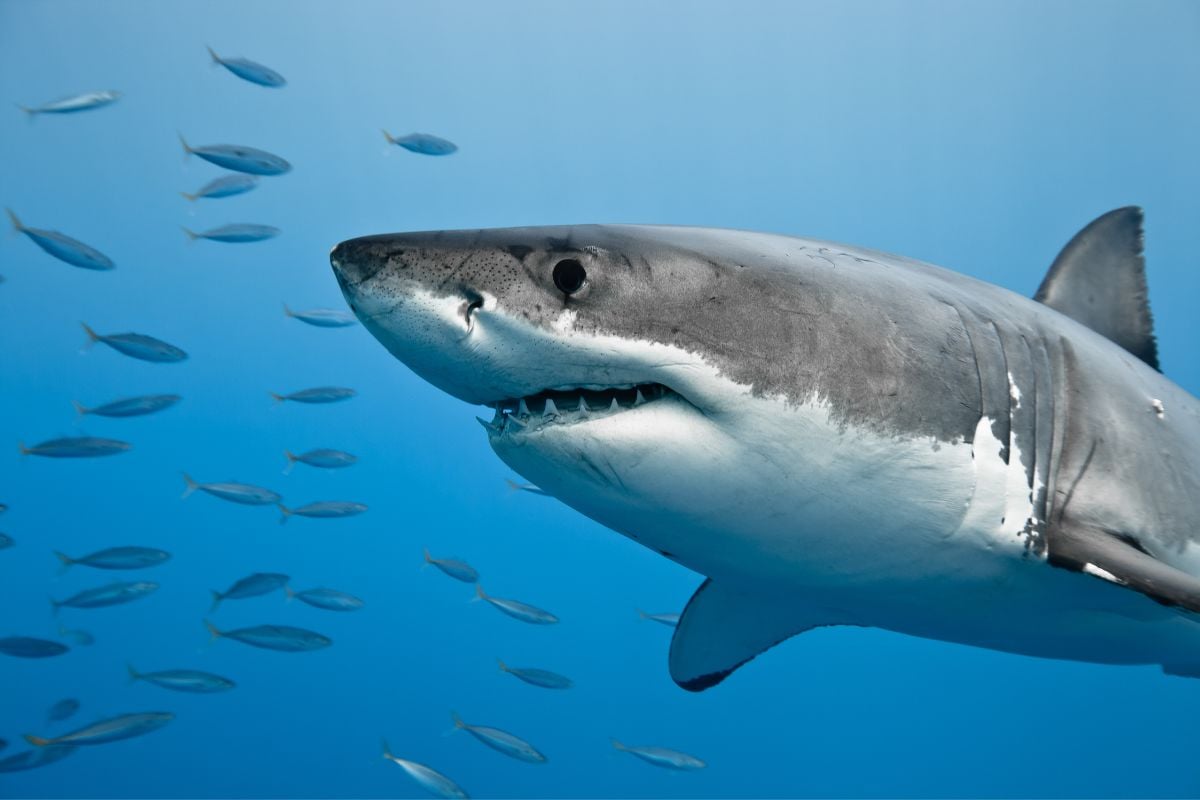 Because sharks are so large, they share some similarities with groupers. These white-bellied apex predators have dark gray or brown tops. These sharks tend to enjoy long lifespans between 33 to 70+ years.

In the United States Atlantic Ocean, white sharks live anywhere from Maine to the Gulf of Mexico and the Caribbean. While the white shark and grouper are different in their position on the predator chain, they share similarities such as size and popularity for food. Many enjoy sharks for their white flesh, as they do groupers. 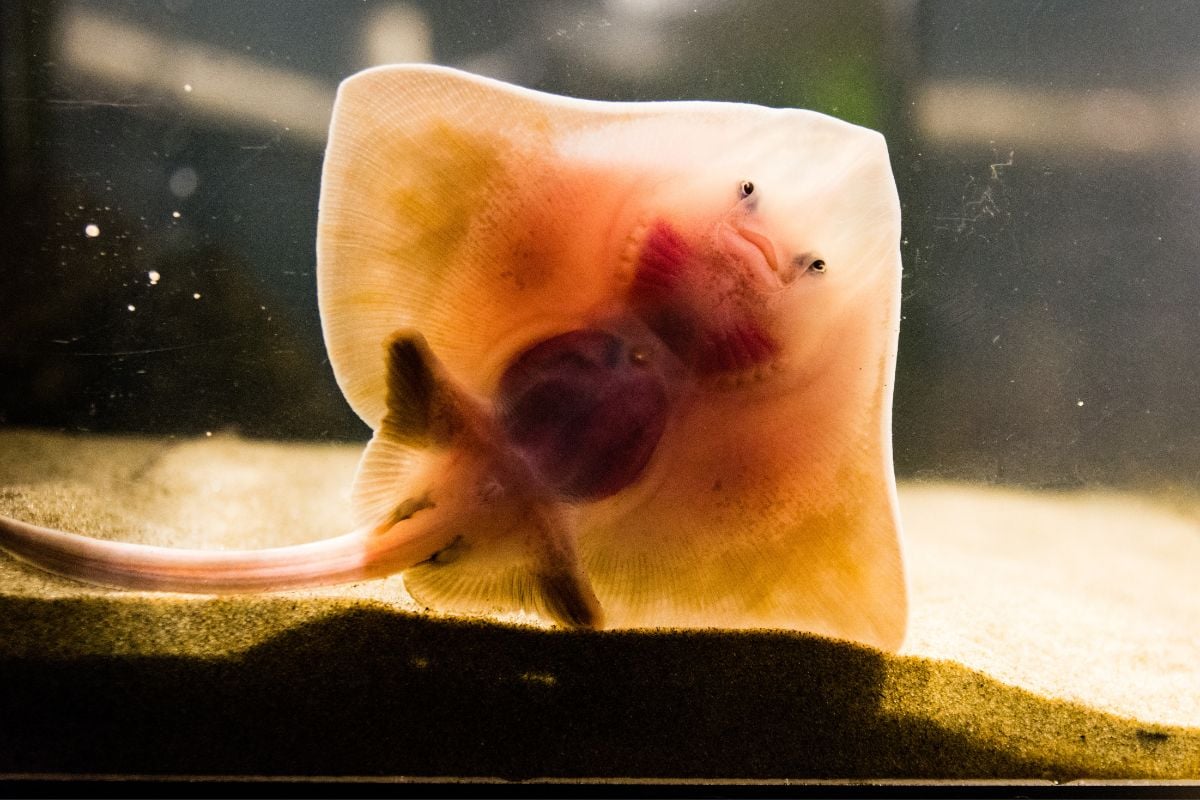 Like other white fish, Skate are comparable to grouper in taste. Skates are in the same family as sharks and sting rays. Their relation to rays gives them a shape that resembles a kite.

Winter skates in particular are light brown in color with dark spots peppering their bodies. Winter skates tend to be pretty big, growing up to 5 feet long. Similarities between skates and groupers include long life spans, white flesh, and brown coloring.

Differences between skates and groupers include their body types and location. Additionally, skates come from a different family in the animal kingdom of fish.

See also  Do Porcupines Shoot Their Quills? How Do the Quills Work? 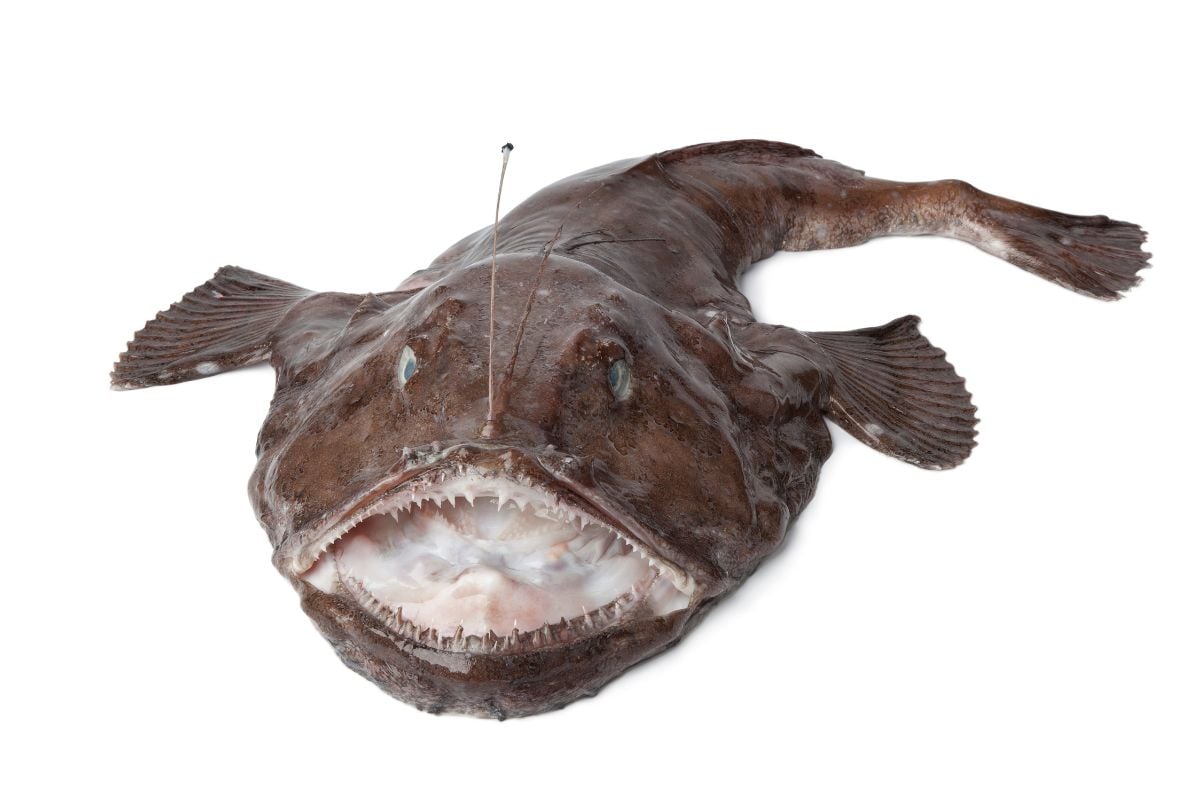 Monkfish bodies consist of large heads with gaping mouths that taper into a narrower body, much like a tadpole. The size and lifespan of monkfish differ based on gender. Female monkfish live to 13 years or more and grow to exceed 4.5 feet in length.

Males, on the other hand, only last 7 years on average and stop growing when they reach around 3 feet in length. Monkfish eat almost anything in the water. They live along the Grand Banks to the northern Gulf of St. Lawrence to Cape Hatteras in North Carolina.

Monkfish are different from groupers in their body shape, age, and feeding preferences. They are similar in that both are white fish with brown or greenish coloring.

Is Mahi similar to grouper?

Mahi Mahi tastes similarly to grouper. However, it is usually less expensive, which makes it a popular substitute. Its lean, firm texture makes it the perfect choice for grilling or frying because it holds together with some handling.

What is the tastiest white fish?

Cod is considered one of the tastier white fishes. If you’ve ever had the British dish fish and chips, you’ll know why cod is considered so delicious. Between its flaky texture and density, it’s a wonderful fish for cooking and very popular.

Which fish has the most mercury?

According to healthline.com, “Overall, larger and longer-lived fish tend to contain the most mercury . These include shark, swordfish, fresh tuna, marlin, king mackerel, tilefish from the Gulf of Mexico, and northern pike . Larger fish tend to eat many smaller fish, which contain small amounts of mercury.”