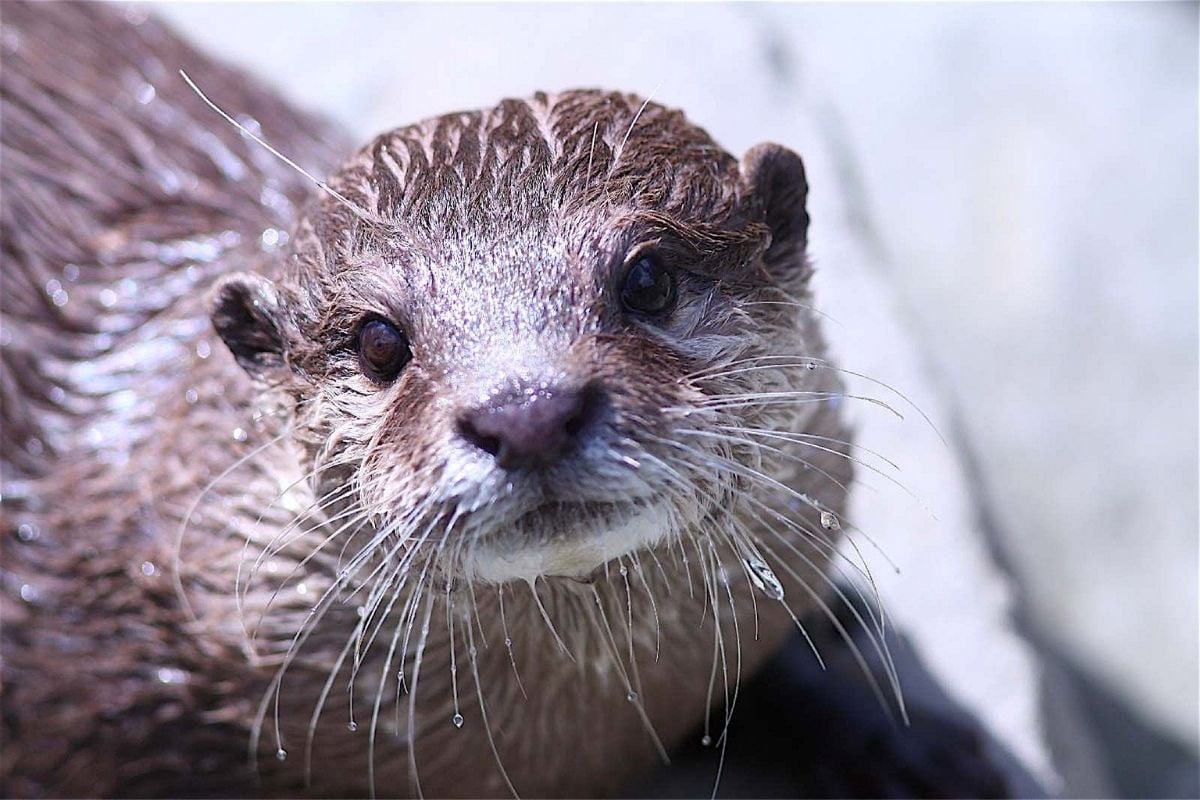 An otter is a sleek, glossy, dense furry aquatic mammal with short legs, webbed feet, and a muscular tail and looks very similar to a beaver and a muskrat; but are they the same? Do otters build dams like beavers?

Contents show
What’s the Difference Between Otters, Muskrats, and Beavers?
The Otter
The Beaver
The Muskrat
Where Do Otters Live?
Do Otters Get Along with Beavers?
Do Otters Build Dams like Beavers?

What’s the Difference Between Otters, Muskrats, and Beavers?

The otter, the muskrat, and the beaver look very similar to each other, and if you are by a pond or a river, you might mistake one for the other. If you can get close enough, there are definite differences between these three similar mammals. 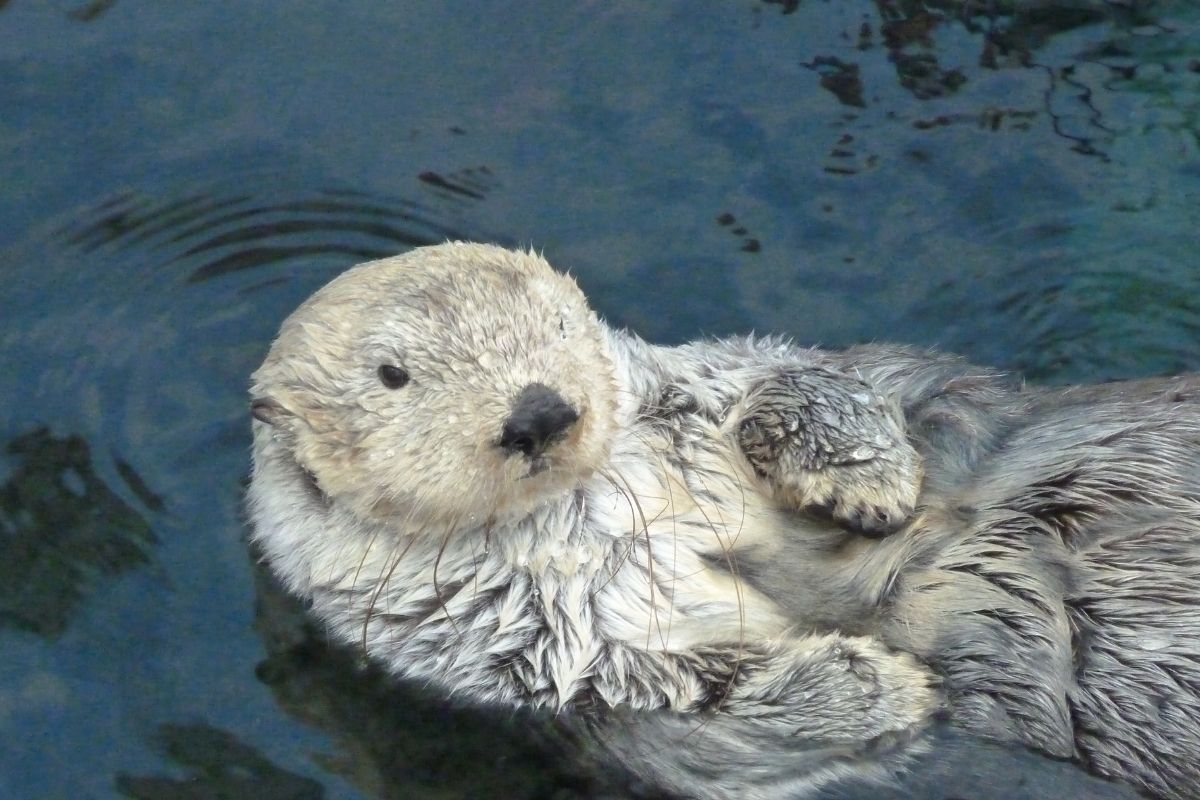 The otter’s body is a sleek, streamlined, athletic build designed for swimming and moving quickly. The body shape is the easiest way to tell them apart from the other two mammals. They are entirely fur-covered with a brown, dense, shiny coat covering them to the tip of their muscular tail.

Speaking of tails, their tail is long and fur-covered, very different than the beaver and muskrat. The river otter varies in size, ranging from 38 to 44 inches in length, and will weigh 30 pounds, but can be as little as 10 pounds depending on their region. You can also tell which animal lives there by looking at the area where the mammal is living.

An otter leaves piles of fishbone and scales because they tend to eat in the same place repeatedly. Otters are also very social creatures, and you will hear a barking similar to a dog as they chatter back and forth with each other. The land where the otter lives will have distinct smooth areas on the water banks, which are called “otter slides,” and they help the otter get into the water quickly.

They use these trails so often they cause them to look like slick slides, and the otter slides rapidly into the water – it’s a great escape route from a predator.

The beaver is the largest of the three mammals. They can weigh up to 60 pounds, look much rounder, and are definitely not very athletic looking. They are covered with long fur, and have separate fingers that help them grab the vegetation they eat, which is another difference between otters and beavers.

Beavers are herbivores, meaning they don’t eat fish but plants like tree bark, clover, water plants, and even local farmers’ crops. The beavertail is the most distinct difference between the three mammals. They have a large, hairless, flat tail, and if they are angry or trying to keep you away, they will use it to slap the water.

It can be intimidating to see this large animal smacking the water with its hairless tail. Another difference is the area they live. You will often see a beaver dam stopping or slowing the water flow and a large beaver den where they live.

The surrounding area will have noticeable damage to trees which the beavers gnaw through to build their homes. 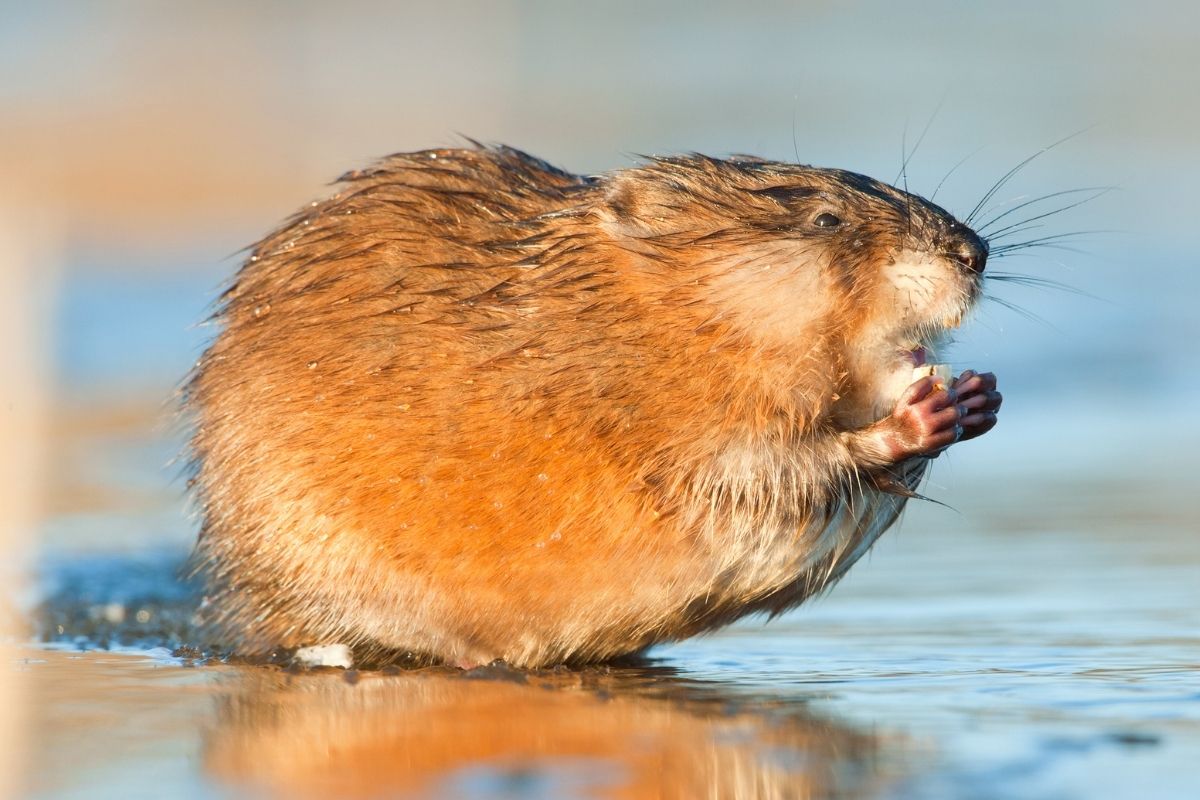 The muskrat is the smallest of the three mammals, looking at first like a tiny beaver. Though at maturity, a muskrat will only weigh two to four pounds. Their tail makes it easy to tell them apart from the others.

The muskrat has a tail that looks like a giant rat’s tail. Unlike the beaver, it is not flat, and though similar in roundness to the otter, it is not fur-covered but hairless. The muskrat does not build a dam like a beaver.

Instead, it burrows into the banks of ponds, lakes, and rivers. This burrowing can sometimes cause the banks to cave in, causing damage to the wetland area. Muskrats are also good swimmers, but not as fast or sleek as an otter, though they swim faster than a beaver.

Where Do Otters Live? 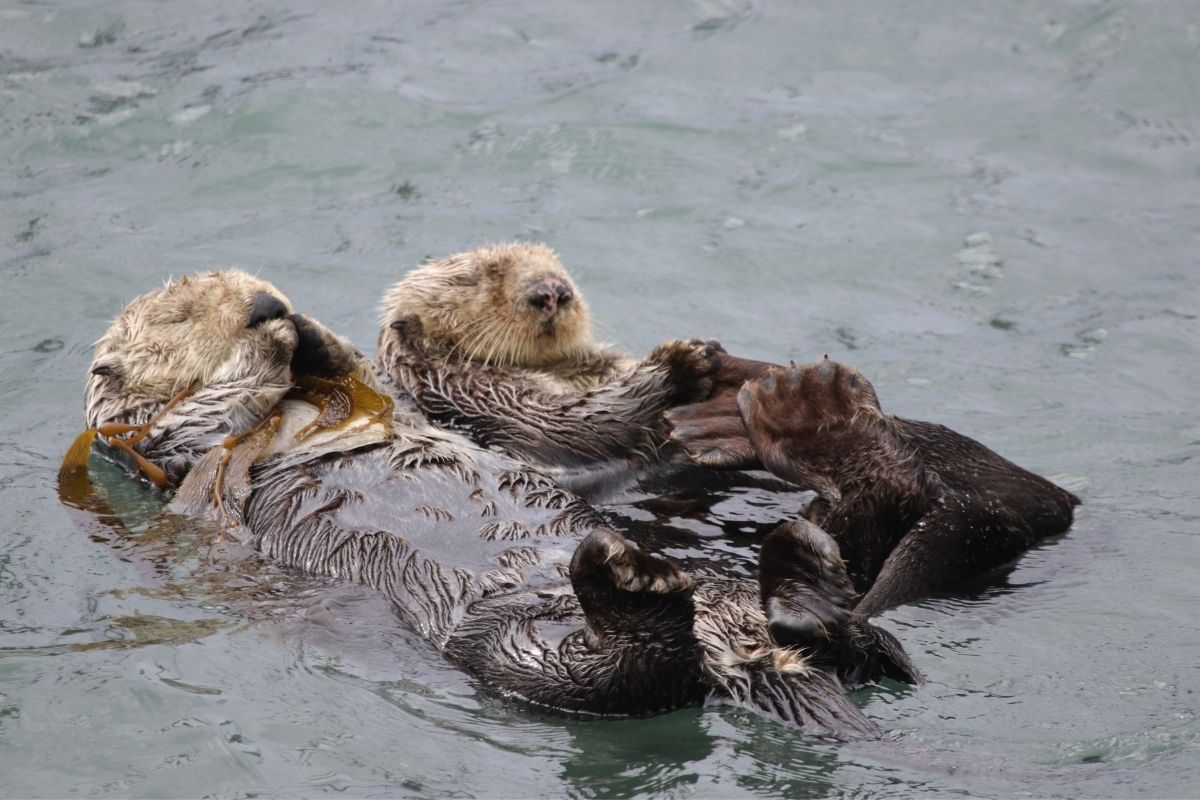 Otters live all over the globe. They always live near water; the only significant difference between otters is the type of water; some live in saltwater, a mixture of salt and fresh water, or just freshwater on the river. Some ocean otters can get a lot bigger; they are known to be up to ninety-nine pounds.

Whereas their friend, the river otter, will be only thirty pounds at the most. Their food is based on where they live, and they all like meat- with fish being their favorite.

Do Otters Get Along with Beavers?

Most of the time, the beaver and otter get along fine. They have a commensal relationship, which means they live in the same areas, and one benefits more than the other. In this case, it is the otter that gets the benefit.

The otter is technically a predator to the beaver but will seldom eat a beaver, only in cases of extreme food shortages. The beaver does not seem to mind the presence of an otter and will continue working and living alongside the otter. Otters like to live by a beaver dam.

The beaver will slow down the water flow, often trapping fish in the beaver dam. This makes excellent, easy fishing for the otter. Sometimes they will swim into the beaver’s den to escape predators or stop and eat their meal in the beaver’s dam. 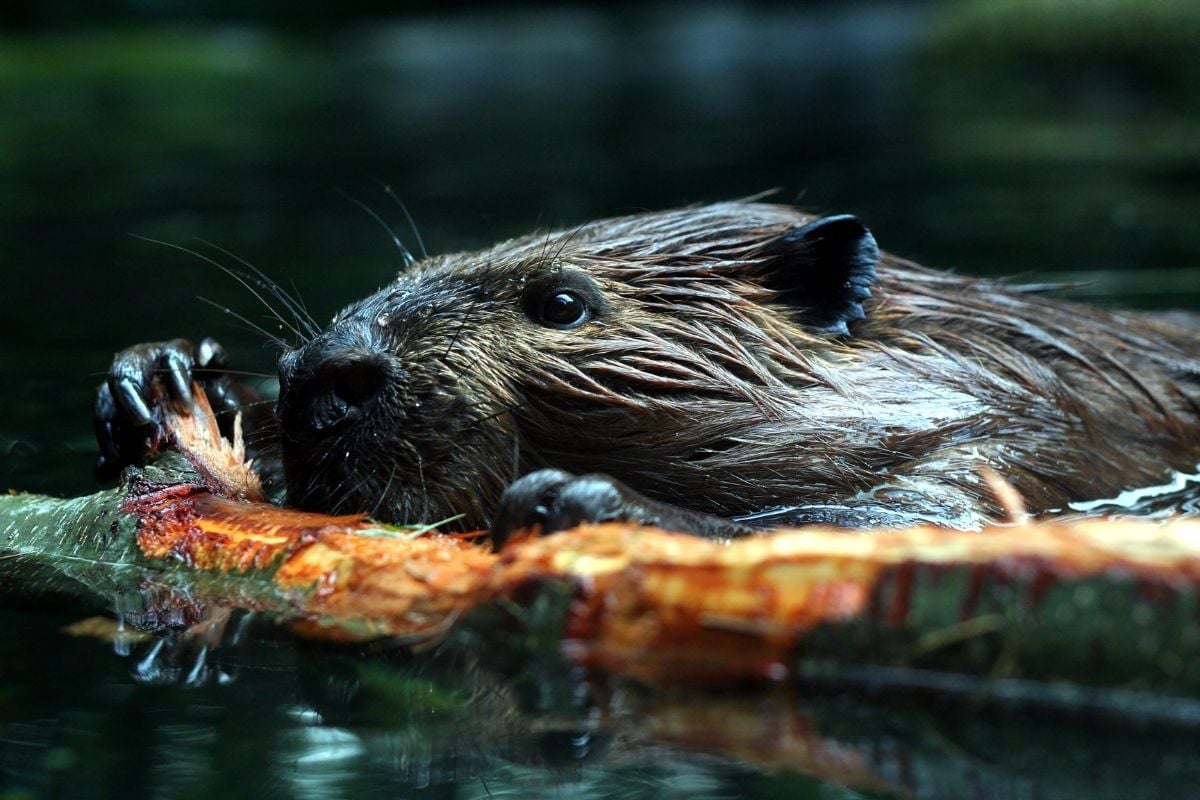 Otters build dens very strategically. Their dens are close to the water and have multiple entrances; underwater entrances and land entrances under trees or rocks. They will have numerous areas and a separate room or area for going to the bathroom.

The female will line a dry area of the den with soft leaves, moss, and grass to birth her young. Otters do not build dams; only beavers build dams. Otters will sometimes move into an abandoned beaver dam, making it an excellent place for the otters to live.

They will customize the dam to suit their needs and add the desired rooms onto the dry land. Sometimes an otter can get a little pushy, and they will move into the beaver’s den even when the beaver is still living there. Otters cannot build dams, though.

Otters have teeth that look like cats, and they eat meat. Their teeth are perfect for that. It would be nearly impossible for them to chew through a tree as a beaver does.

The beaver has flat teeth that are an excellent design for chewing through big trees. So, the beaver builds a dam, and the otter does not. Even though the otter, beaver, and muskrat look similar, they are very different mammals.

The beaver and the otter often live close to each other, and sometimes the otter will live in the beaver’s den, though he did not build the dam. Only beavers can build dams. Otters cannot build a dam.