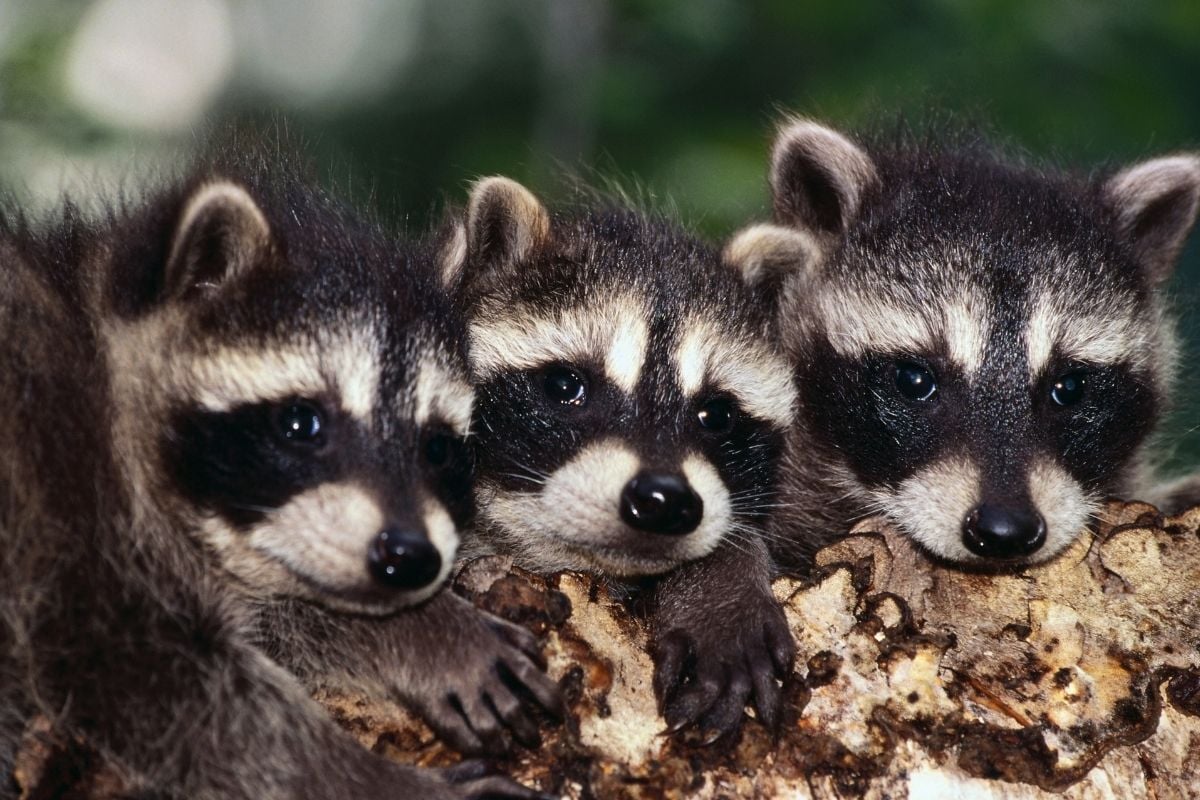 A raccoon is a grayish-brown mammal with a fox-like face. Its distinctive features include a ringed tail, masked face, and thick underfur that protects it from cold extremes. Its five-figured dexterous front hands (resembling human figures) also distinguish raccoons from the rest of the Procyonidae family.

It is native to North America, Canada, and some parts of Latin America. You would probably attest to how it ransacked and scattered the garbage in your trash if you have ever met one. Or how it cleared snakes, rats, lizards, and other varmints from your compound.

Yes, raccoons can be messy and useful at the same time. And the way you treat them depends on your perception. Want to learn more about these small animals?

Please keep reading to learn about the different types of raccoons,  their habitats, habits, favorite meal, life expectancy, and other aspects of this masked animal. Basically, there are three main types of raccoons:

Below  is a  detailed description  of  each of the above species: 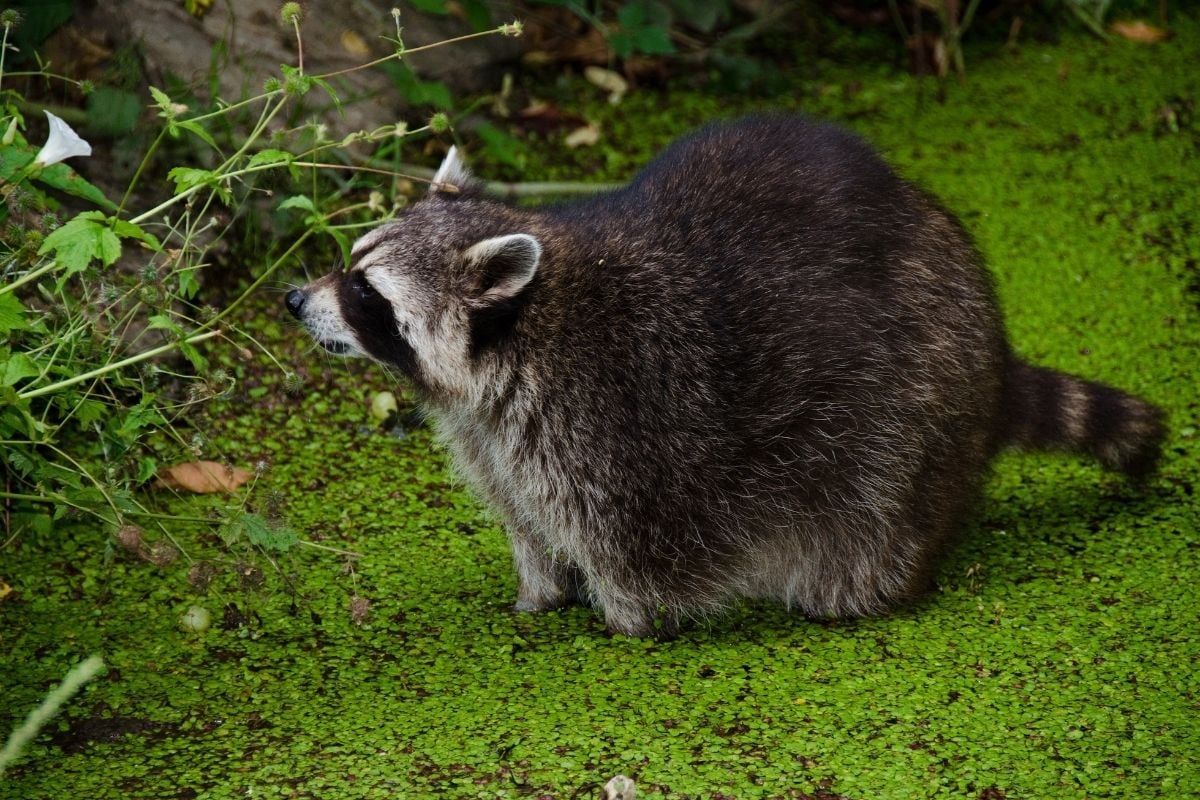 The eastern raccoon, aka the Procyon lotor, is the largest among all raccoon species. It is prevalent in most regions of Canada, Russia, Germany and almost all regions of the United States, excluding Nevada, Utah, and Arizona. They are ubiquitous.

They can feast on fish, frogs, crabs, and other water critters, snakes, rats,garbage waste, plants, fruits, and birds and their eggs on land. These creatures use a combo of their strong sense of smell, sharp eyesight, and lightning-fast hands to locate, spot, and snatch their meals.  They last between two and three years.

The eastern raccoons don’t have permanent homes. Instead, they are nomadic within an established territory.  They will mark potential shelters within a  territory, where they can always rest after long hunting.

These nocturnals mate between January and March. After successful mating, the females give birth to one or seven young ones after two months. After birth,  the mother cares for the young ones for almost a year before becoming fully autonomous.

Caution: The eastern raccoons can spread diseases like Lyme, campylobacter, yersinia, salmonella, and other diseases which may be detrimental to human health. They should be kept off residential areas to prevent the worst from happening.  The raccoon subspecies falling under  this category include:

Examples of these habitats include Rockland hammocks, mangrove swamps, etc. Key vaca raccoons survive on different foods, including rodents, snakes, plants, fruits, birds, aquatic foods, or other natural foods they can find in their island home. They sleep in tree holes, hollow trees,  rock crevices, and other hideouts, where they feel safe from water and their predators during the day.

The Procyon lotor auspicatus breeds in the early spring, and the females care for their litters for up to one year. The key  Vaca Raccoon is an imperiled subspecies. This means that their population has been declining over the years, risking their extinction.

On the other hand, it implies that the wildlife authorities must take drastic conservation measures to restore a healthy population of this raccoon subspecies.

The Procyon lotor maritimus is native to the coastal marshes of Delaware and Maryland. Its hair is more coarse and grayer than that of the eastern raccoon. It lives on small fish, clams, small frogs, and other aquatic critters.

The Procyon lotor salutus is found on Saint  Simons Island, along the  Georgia coast. They are darker and browner than the raccoons in the south of Carolina.  The animal features  dense teeth to allow for efficient capturing of crabs and amphibians.

Also called the Florida raccoon,  the Procyon lotor elucus dwells in the peninsula of Georgia and southern Florida.  You can also find it in the Bahamas. Its distinctive features include  a rustic patch on the back of the neck and a humped face caused by its enlarged sinuses.

Native to Key Largo island near Miami. This raccoon subspecies is characterized by gray hair and a small mask.

The Alabama Raccoon dominates most parts of the American South, including western Georgia, Mississippi, Kentucky, Louisiana, Arkansas,  and western Tennessee. Its small size and yellowish hair on the back and neck differentiate it from other raccoons. You can also identify it by the reddish-brown hair on the middle of its mask.

This species is found in the southern region of coastal Louisiana. Its fur is strikingly yellow, and it feeds on other animals and cooked food from the garbage.

The Procyon lotor fuscipes, popularly known as the Texas raccoon, colonizes the Texas South,  East, and Western Louisiana. It can grow to the size of a medium-sized dog, and you can identify it by its jet-black mask. According to anecdotes,  these raccoons may team up to clear fields of corn.

So corn farmers in areas dominated by these raccoons should be prepared for regular attacks.

As the name suggests, the Procyon lotor mexicanus dominates most parts of Mexico, especially the northern and southern New Mexico. You can also find it in western Texas. Its distinctive features include its bristle gray hair and broad-uninterrupted mask.

The other raccoon  subspecies you can find  in Mexico include:

The Mississippi valley raccoon is prevalent in the American Midwest, including Indiana, Missouri, Minnesota, Iowa, Wisconsin, and Illinois.  They also dominate some parts of the plain states, including Nebraska, Oklahoma, North Dakota, Kansas, and  South Dakota. They take after the Texas raccoon in every aspect, except their thicker and denser coat, which cushions them from cold weather extremes.

The other Procyon lotor subspecies you can find in different parts of the world include: 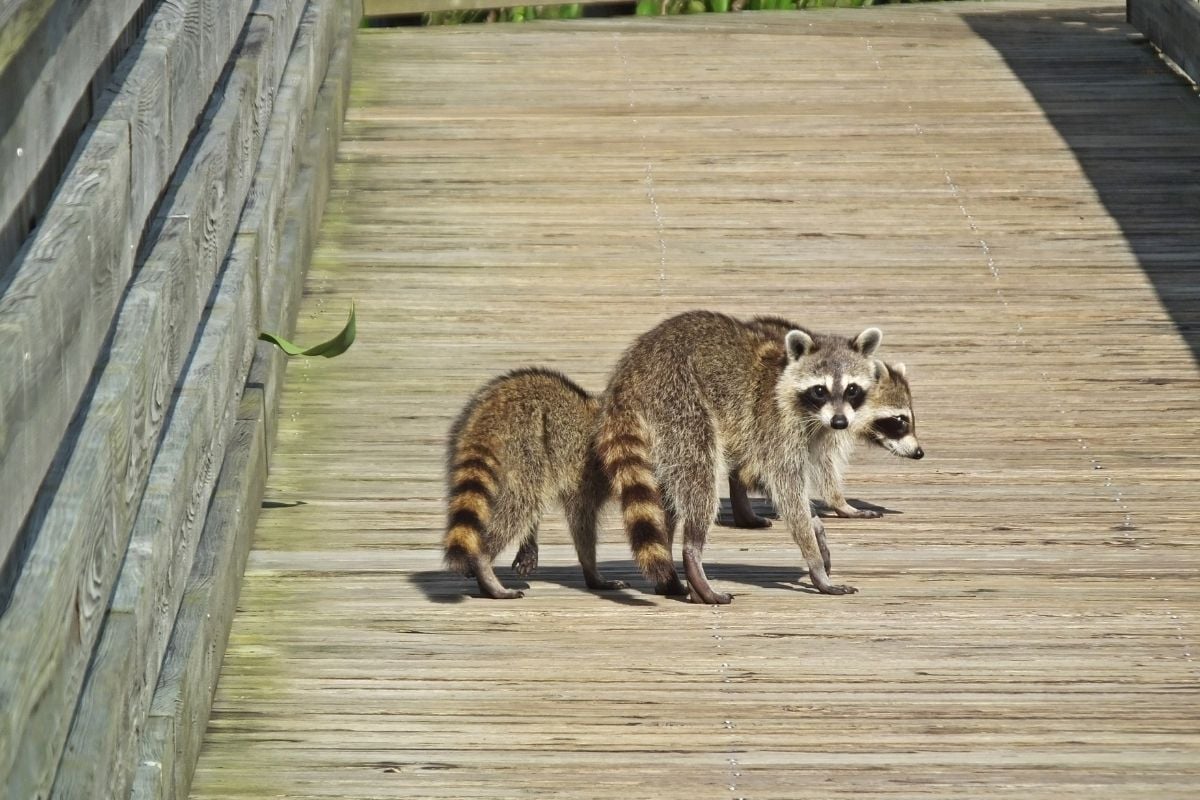 The Procyon lotor species are omnivores. They consume foods like crabs, shellfish, small snakes,  birds, insects,  fruits, plants, or dead decaying matter.  They use a combination of their strong sense of smell, sharp eyes, and fast hands to locate, spot, and catch their food.

The Procyon lotor raccoons are nomadic within an established territory. They can sleep in tree holes, hollow trees, stone crevices, etc. They mate annually, and the females care for the litter for up to one year.

Finally, these nocturnals can live up to three years in the wild and 10 years in captivity. 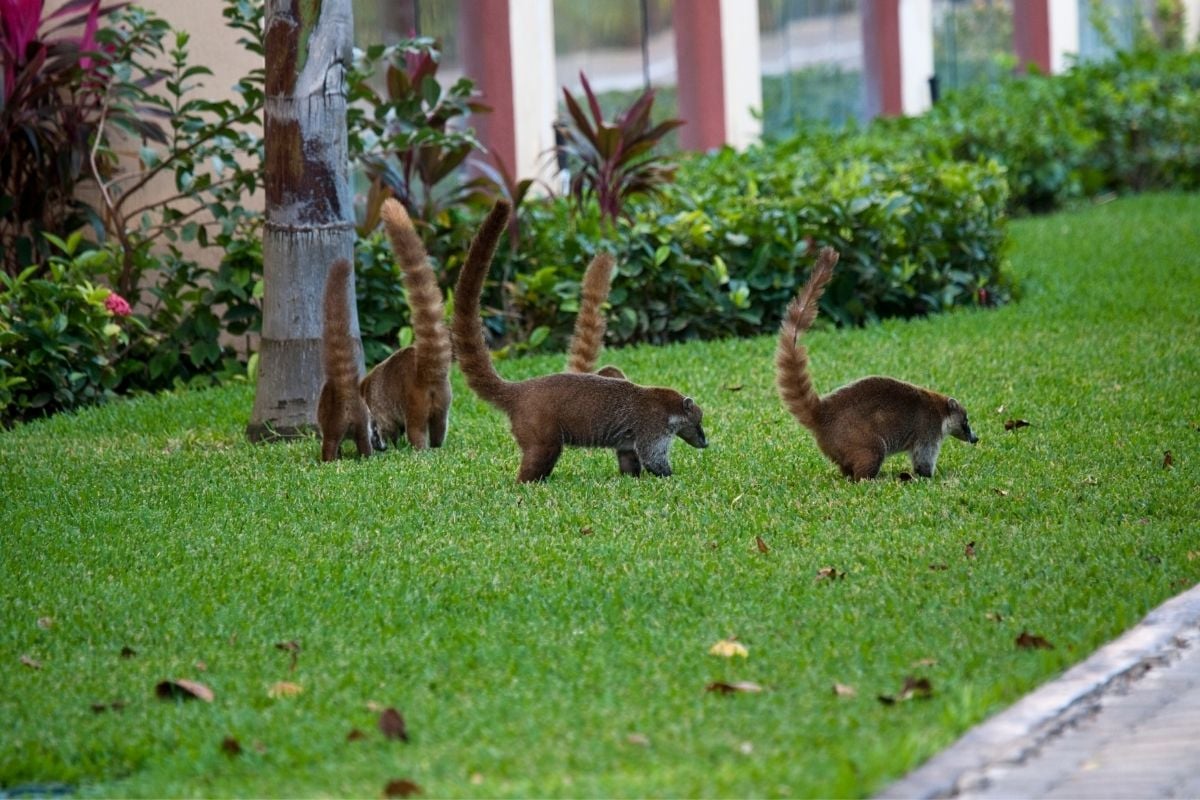 The Cozumel raccoon is native to the island of Cozumel, which is nestled in the east of Mexico. According to anecdotes,  the island features dense forests and grasslands, which offer a  comfortable home to these nocturnals. This raccoon is also called the dwarf or pygmy raccoon due to its small skull and general body size.

Like the other raccoons,  Pygmaeus raccoons are masked on their faces. However,  their fur is relatively lighter than that of a  common raccoon. While half of their diet consists of crabs, Procyon pygmaeus also feast on shellfish, frogs, lizards, insects, small snakes, and vegetation.

They hunt for their food in the mangrove swamps or on the wet sandy beaches, using their sense of smell and sight. They use their sensitive paws to determine the type of food they have caught before feasting on them. Unlike the Procyon lotor species, this raccoon doesn’t appear in residential areas.

The raccoon species is endangered, with approximately 300 or fewer raccoons remaining in the world. They confine themselves to Cozumel island only. They are nocturnal, meaning that they are active at night.

During the day, these small mammals sleep in the trees to keep away from their predators. Besides their small size,  you can identify them by their rounded snout and yellow tail. Otherwise,  the cozumel raccoon is similar to the common raccoon with buff-gray hairs with occasional fur on the back and pale buff hairs on the underparts.

What about their reproduction? Cozumel raccoons breed between September and November, and the gestation period takes between 63 and 65 days. A  female raccoon gives birth to two to five liters.

She then takes care of the offspring for up to 10 months, when they are old enough to look for food and mating partners. Though there is no solid information about the longevity of these animals in the wild, pygmeus raccoons can last up to 17 years in captivity. 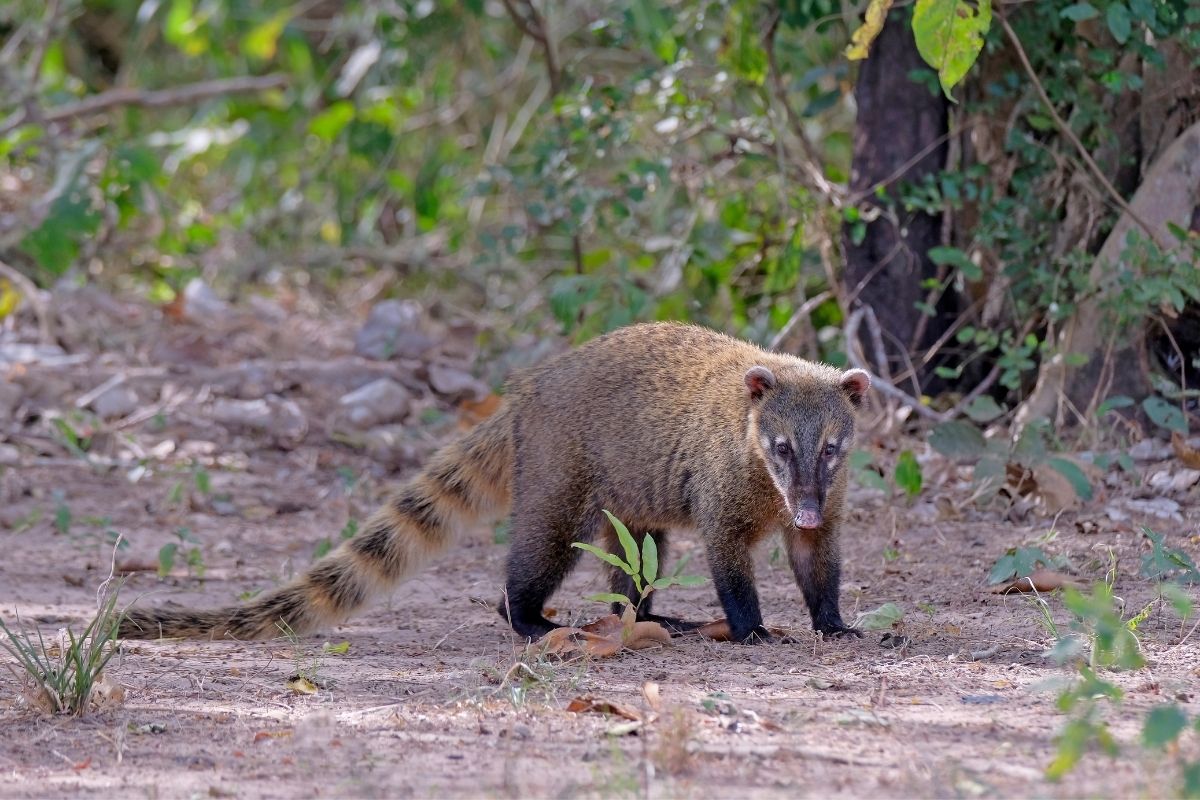 The Procyon cancrivorus is the next raccoon species on my list. It is native to Tobago,  Trinidad, Costa Rica, Argentina, Uruguay, and other areas with wet, hot, and marshy environments. Despite its name,  the Procyon cancrivorus is an omnivore, and it can feed on lobsters,  crabs, crayfish, oysters, clams, fruits, plants, frogs,  fish, insects, turtle eggs, etc.

Compared to the Procyon lotor raccoon (the common raccoon),  the two share standard features like the bandit mask and bushy ringed tail. However,  these two raccoons are different in many aspects. For instance, the crab-eating raccoon’s nape hair points upwards and not backward, as with the common raccoon.

Additionally, the Procyon Cancrivorus has narrower and sharper claws than the common raccoon,  adapting it to its arboreal lifestyle than their North American cousins. The crab-eating raccoons are primarily terrestrial, living in areas close to rivers, lakes, streams, and swamp areas,  where they hunt for their prey and food. They have a perfect combination of the senses of smell, eyesight, and touch, making their hunting a breeze.

Procyon cancrivorus is a nocturnal mammal. They spend a significant amount of daylight on trees to keep off their enemies. Unlike the northern raccoon,  the crab-eating raccoon never migrates to city or residential areas on the lookout for food.

These nocturnals live in the stone crevices, abandoned nests,  hollow trees, tree holes, etc. They breed once per year,  between July and September, and the lactation period takes up to 73 days. After birth, the females care for their litter for up to one year.

During this period,  the females become exclusively terrestrial to protect their offspring from possible dangers.

The  subspecies falling under the crab-eating raccoon  species include:

There are three types of raccoons: the Procyon lotor, the Procyon Pygmaeus and Procyon cancrivorus each, with the first and the latter having multiple subspecies. The Procyon pygmaeus is a monotypic species, and they are the smallest in size and population, with only 300 or fewer remaining in the world. The Cozumel racoon is critically endangered, and drastic measures are needed to restore the population.

You can easily spot them on the streets and in abandoned buildings. The Procyon cancrivorus is medium-sized. They are known for their craving for crustaceans, including crabs.

Like the other species above, the crab-eating raccoons are omnivores, meaning that they can also feed on fruits and plants. They aren’t social with humans and will never leave the cities and residential areas for food and habitation. The crab-eating raccoon species  is polytypic, but  smaller in population than the Procyon Lotor  species.

Whatever type of raccoon you bump into, it is essential to note that they can spread diseases like rabies,  Baylisascaris procyonis, distemper virus, parvovirus, etc. Therefore, it is not advisable to come into close contact with the animals or keep them as pets.