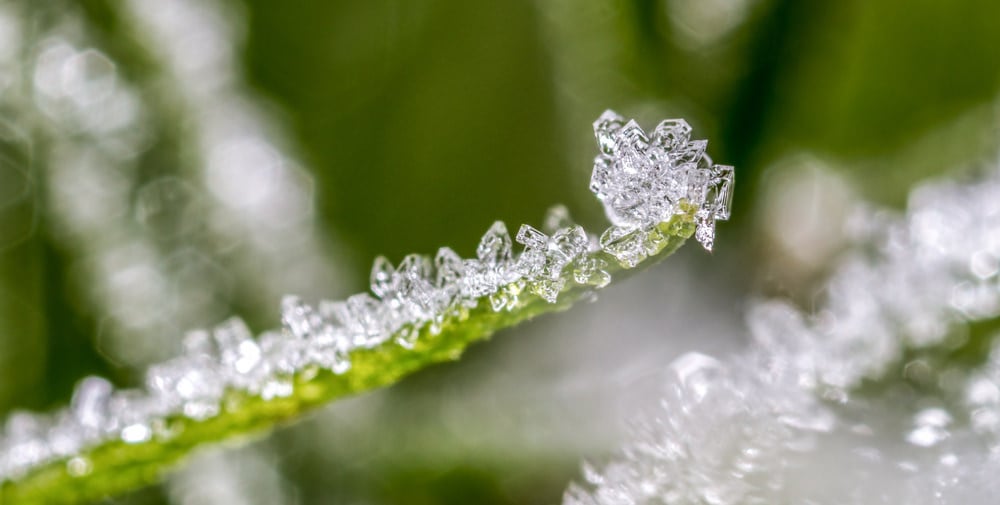 Frozen dew is very common in cold areas, and meteorologists can easily forecast it. This happens in the early morning, and when the sun rises, it melts and evaporates.

What Is Frozen Dew?

Marshall Shepherd defines frozen dew as the water droplets and layers of dew that freeze. It happens when the temperatures fall below the freezing point. The dew condenses into a solid-state, as ice.

How Is Frozen Dew Formed?

As we all know, dew comes from the air like rain. It exists in water vapor before its formation. Thus, the process of dew formation depends on relative humidity.

At 75% humidity, the air can hold another quarter of the water it contains. At 100%, the air cannot absorb more water.During the day, the temperatures are very high due to absorbed solar radiation. As a result, rapid heating of the land takes place. Water on the surface then evaporates, and humidity increases.

For dew to form, certain atmospheric conditions should exist. They include:

A clear sky is essential to ensure the land heats up optimally during the day. However, cloudy skies lead to the absorption of solar radiation. They also reflect away the solar radiation. The land, hence receives minimal heating, leading to low rates of evaporation.

At night, clear skies allow for faster cooling of the land. Cloudy skies act as insulation for heat loss during the cooling process. The condensation rate is reduced.

An extensive layer of saturated air can settle in a region and condense faster when the air is still. Windy conditions do not allow the water vapor to settle on objects. Dew is, hence, more difficult to form.

Areas that have low moisture in the soil hardly receive morning dew. Dry areas receive low rainfall that limits the ability of the air to get saturated. Low water vapor thus leads to lower chances of having humidity.

The temperatures then fall below the freezing point. The dew formed on the surface of objects then turns into ice layers and droplets. These frozen droplets and layers are thus referred to as frozen dew.

Where Is Frozen Dew Found?

In humid regions, frozen dew frequently occurs than in arid areas. Most common surfaces that they can occur on include:

Vegetation and grass lose water in a process known as evapotranspiration. It results in a higher humidity around their pores, leaves, and stems. Dew then forms as temperatures drop to the dew point. It later freezes to form the frozen dew.

Metals are excellent conductors of heat. They absorb heat very fast and lose it very fast. Thus, when exposed to freezing temperatures, they attain freezing temperatures as well. It then acts as a perfect place where water vapor quickly condenses. Dew thus forms on metals very fast and efficiently due to its ability to lose heat. It explains why cars are sometimes covered with a layer of ice on their surfaces.

See also  Lake Turnover: What Is It and Why Does It Happen?

What Is The Function Of Frozen Dew?

Dew can be significant to the environment. Some of the benefits of dew include:

Frozen dew can be very important in providing plants with water sources when it melts. As a result, plants that are in icy or arid areas increase their food synthesis and metabolisms.

Lack of water causes plants to dry. Thus, frozen dew can be very important in limiting the rate at which plants lose water. Also, photosynthetic processes continue to take place as a result. It also helps in the repair of affected parts that had not been receiving water.

Improving Water Balance In The Soil

According to research gate, frozen dew can come in handy to ensure the soil retains water. When the sun rises, the frozen dew melts and adds more moisture to the ground. It also reduces the rate of evaporation as part of the frozen dew ends up as water vapor.

What brings about the difference in frozen dew thickness?

First, it depends on the object type. Cooler objects have thicker frozen dew than warm ones due to their ability to cool the water vapor.

Second, it is the exposure of the object. Therefore, objects that are well exposed to the environment have thicker frozen dew.