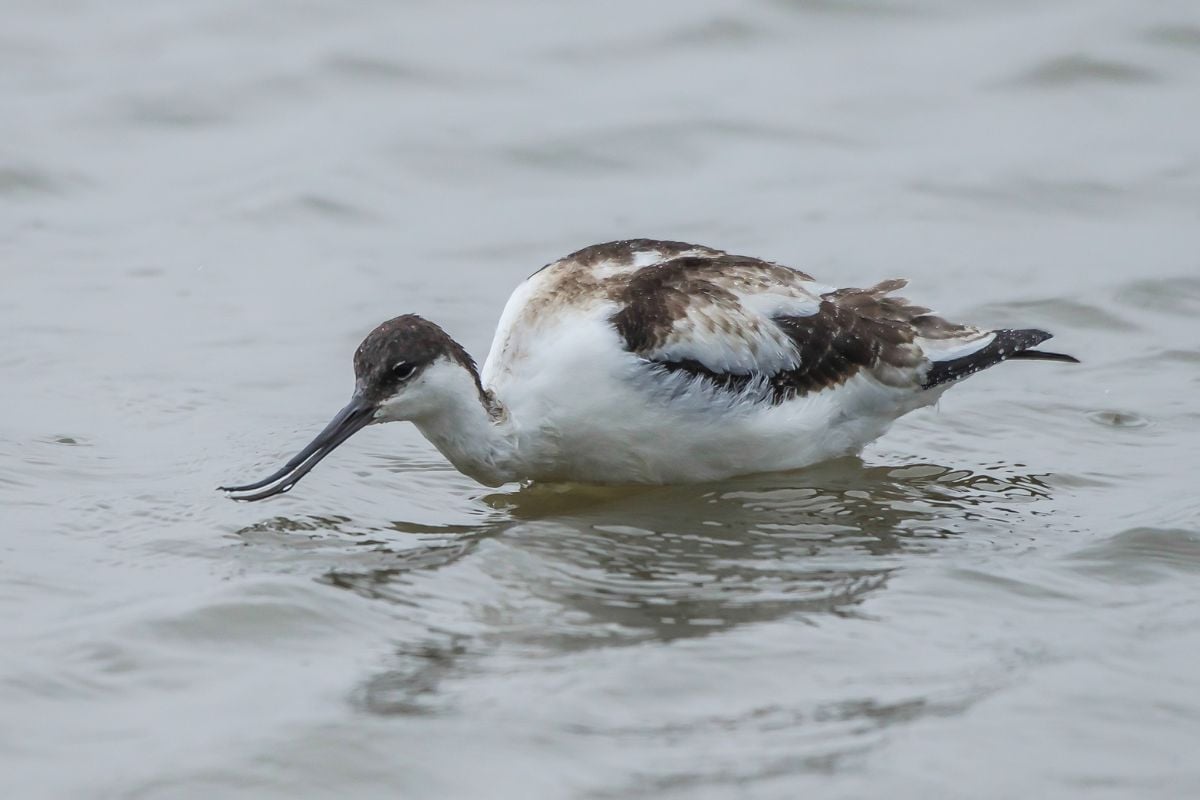 The avocet is a bird that flies rapidly to catch a fine meal or to find an enjoyable spot to take in the sights and sun. The bird has distinctive features, yet there are several birds that are similar to avocets. The appearance, the behaviors, and characteristics of avocets are likely responsible for any misidentification.

The different types of avocets existing today, their habitat, the feeding habits of the avocet, and the behaviors of avocets are interesting facts about this shore bird. Learning fun facts about avocets helps to make learning about them and watching them a fascinating experience. Conservation efforts provide the avocet with a healthier, longer life, with the possibility of having future generations enjoying watching and learning about the graceful avocet.

Contents show
The Amazing and Graceful Avocet
Avocets Around the World
1. Red-Necked Avocet
2. White-Headed Andean Avocet
3. Pied Avocet
4. American Avocet
Birds Similar to the Avocet
1. Stilts
2. Marbled Godwit
3. Plovers
4. Long-billed Curlew
5. Ruddy Turnstone
6. Long-billed Dowitcher
7. Jacanas
8. The Comb-crested Jacana has more coloring than avocets or some other jacanas.
FAQs about Avocets
What are some facts about avocets?
Are avocets on the endangered list?
What are the predators of avocets?

The Amazing and Graceful Avocet

The Pet Facts provides a formal description of the avocet. It belongs to the Animalia family, the phylum Chordata, class Aves, order Charadriiformes, family Recurvirostridae, and genus Recurvirostra. Avocets grow to 16 to 20 inches in length.

The avocet has large areas of white feathers with black coloring on its back and its wings. The color of the head or neck helps to distinguish the four species of avocets from the other avocets. All species of avocets have the appearance of walking on stilts.

They have long, tough, sinewy, blue-gray legs for walking along shorelines and for wading in salt water or in fresh water. The webbed feet of the avocet help to make them good swimmers. Their long, curved bill is another distinctive feature of the avocet.

It provides advantages for the avocet searching for food. It forages for aquatic invertebrates while swimming or wading in shallow water. The bird swishes its head from side to side in order to catch its food in its narrow, long bill.

The bill of the female in some species of avocets is somewhat shorter than the bill of the male, which makes it easier for you to distinguish between the male and female birds. Avocets make their nests in small depressions. Males and females decide the location of the nest together.

The nest consists of dirt, stones, debris and other detritus. All About Birds indicates that they often include grass, other vegetation, and small objects. Avocets often line their nest and keep it lined, perhaps with feathers, throughout incubation.

When the water gets too high, the avocet makes its nest into a tall mound, sometimes measuring a foot high from the ground level. Avocets band together in large, boisterous colonies to help protect them from prey. They sometimes make loud, unpleasant noises to keep prey away.

The life span of avocets is between nine and 15 years.

Avocets Around the World

There are four species of avocets. The red-necked avocet lives in Australia. Visit South America and you will likely see the white-headed Andean avocet. 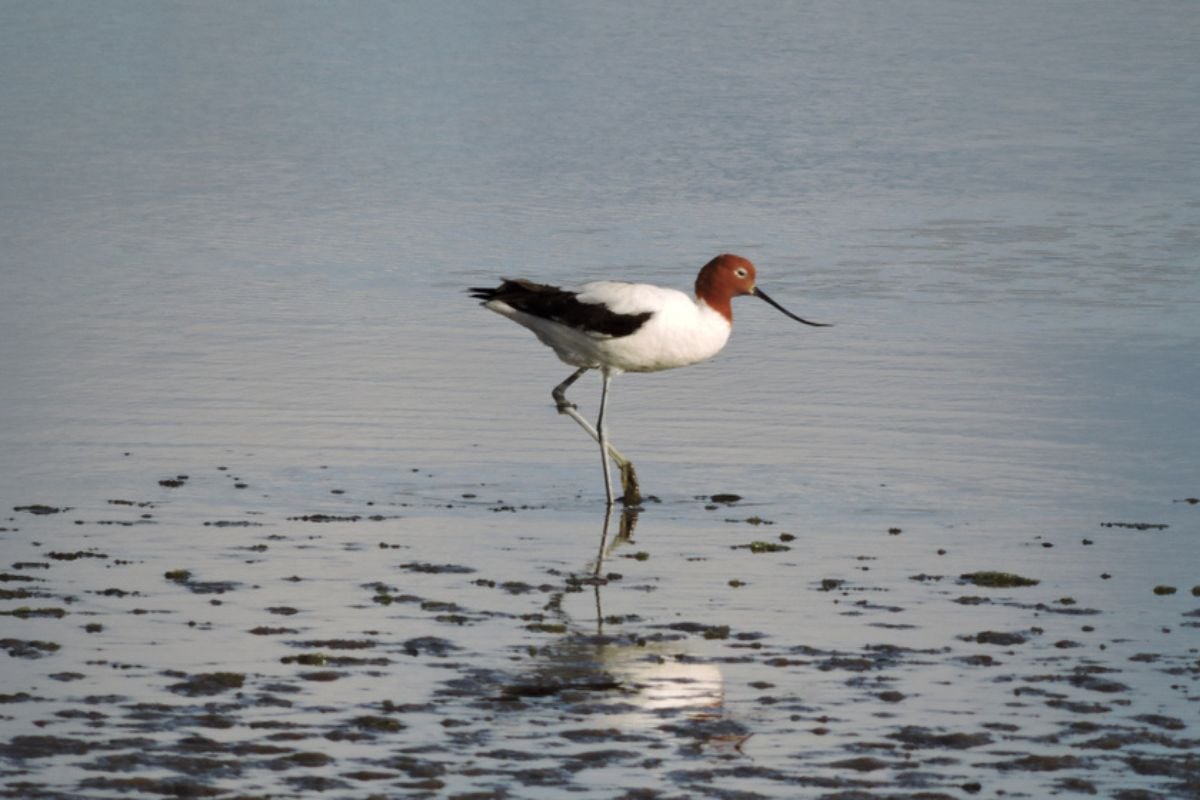 The red-necked avocet has distinctive features that make it an easily recognizable bird. Red-necked avocets have the beautiful black and white feathers of other avocets. The neck and head are a dark red color.

It has the nickname of the “painted lady.” Animalia reveals that the red-necked avocet lives throughout Australia, except for in the north and northeast areas. They are common along the shorelines of Australia.

Hear the call of the red-necked avocet. 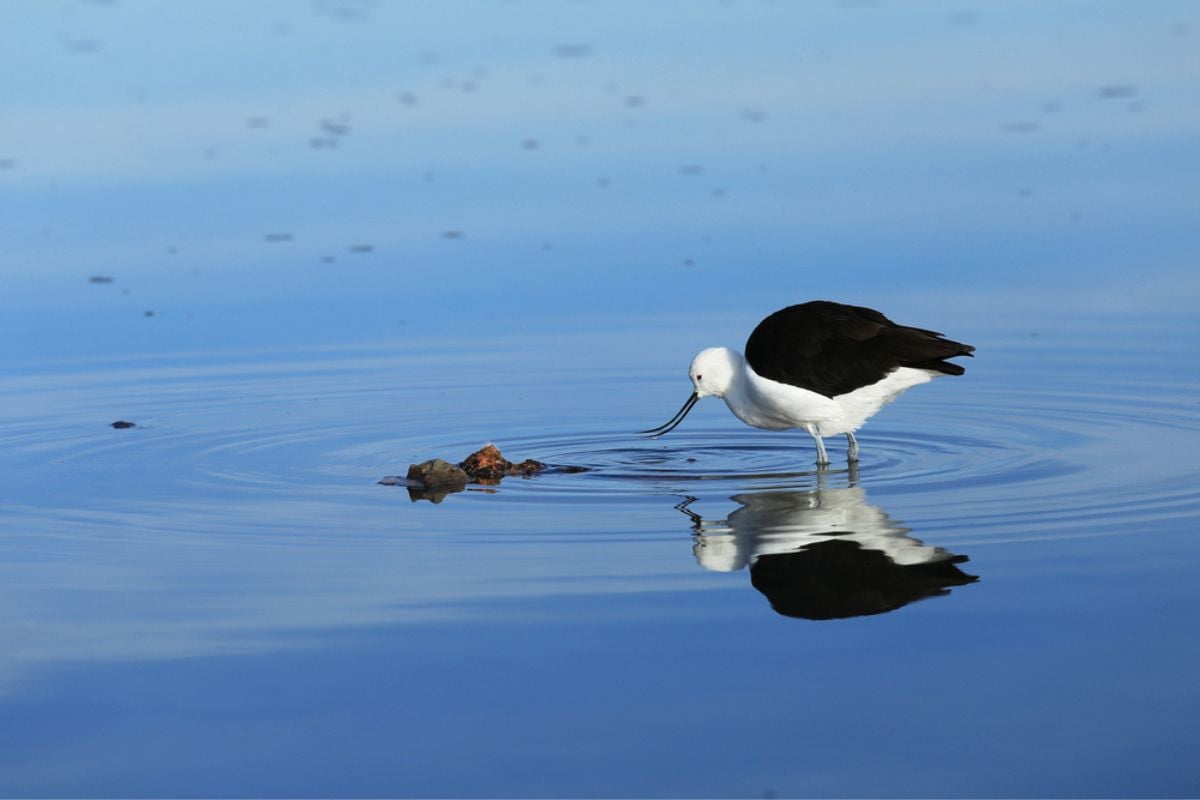 The white-headed Andean avocet, or simply Andean avocet, is a large bird that lives in the high Andean lagoon shores, the bogs, and the salt lakes of the area. Find the Andean avocet when you visit or live in Peru, Chile, Argentina or Bolivia. The bird feeds as it wades in shallow waters, using its upturned bill to capture its meals.

The bill of the Andean avocet female is more upturned compared to the male, making it a distinguishable characteristic. Listen to the recorded bird call of the white-headed Andean avocet on Xeno-Canto. 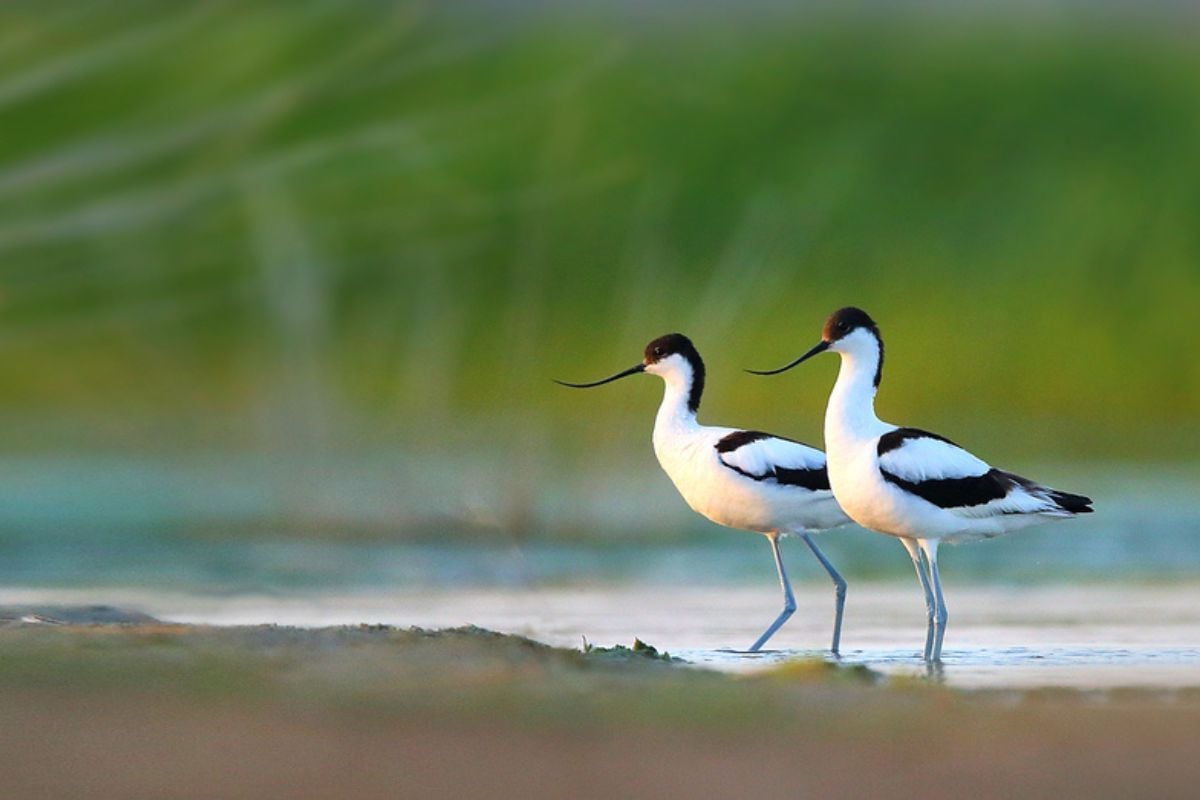 Pied avocets are migratory birds that live throughout many areas of Europe. Find them in the southern part of England, or southern Spain. Look for them in China, Japan, Portugal, France, South Korea and other countries.

See also  Golden Retriever vs Coyote – Which Is Tougher?

They breed in temperate areas of Europe, to Central Asia and some areas of Russia. The pied avocets spend the winter in the southern areas of Asia or in Africa. The pied avocet looks like it is wearing a black cap, which is a striking feature against the white body with black patches.

Hear the call of the pied avocet. 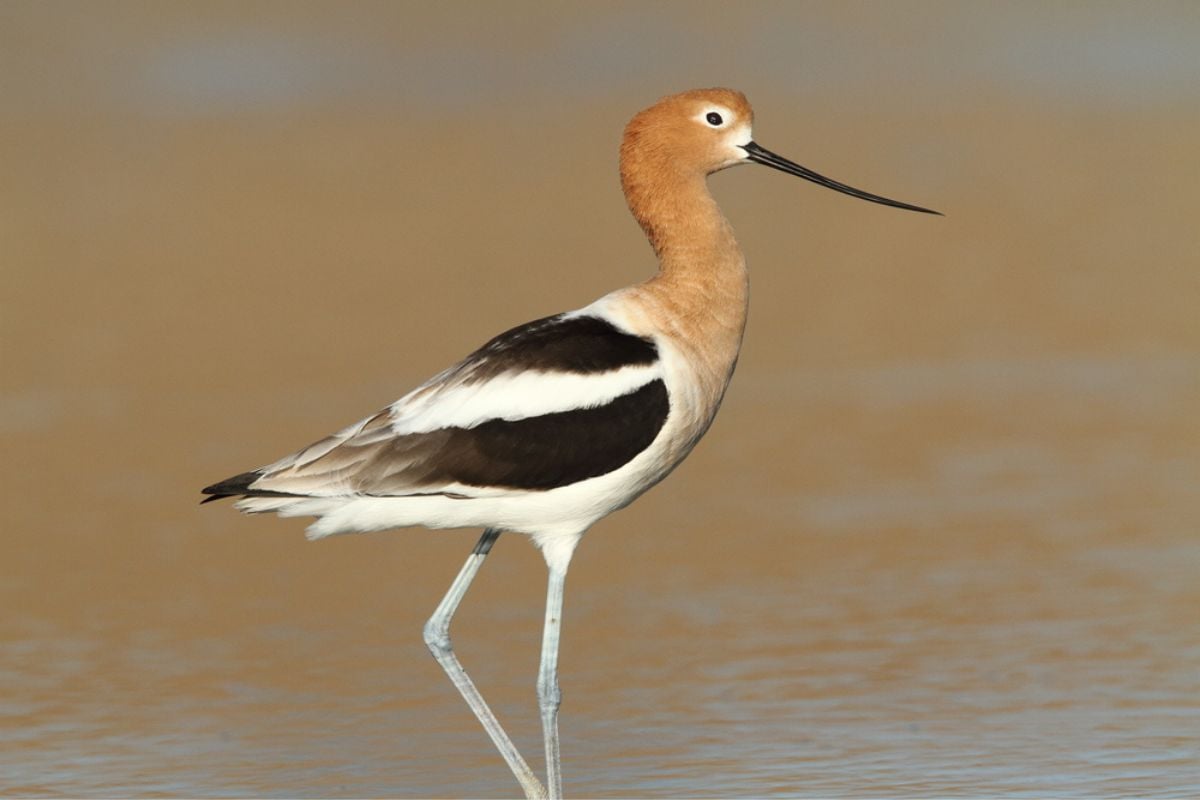 The elegant American Avocet has distinctive features that distinguish it from other avocets. American avocets feature a rusty-colored head and neck during the summer months. The head and neck turn grayish-white in color during the winter months.

The rusty-red head and neck indicate that the avocet is a breeding adult. The American avocet forages for food in shallow wetlands, estuaries and shorelines. They are migratory birds, found in most states in the western U.S., in North Dakota and South Dakota, Montana and Nebraska.

They take up residence in California and New Mexico and all the way to some areas of Canada. Take a trip to Mexico and see them in Mexico City, Hidalgo, and Puebla. Breeding adults establish their territory in pairs.

Each pair stays together during the breeding season. Male American Avocets take more care of eggs during the first several days of the incubation period. Females are more present during the final 16 days.

Both parents care for their chicks, although not for a long period. Newborn chicks quickly walk and start flying at about four to five weeks after birth. Listen to the call of the American Avocet on Xeno-Canto.

Birds Similar to the Avocet

Various birds are sometimes mistaken for an avocet. There are distinctive markings or other features that distinguish other types of birds from avocets. 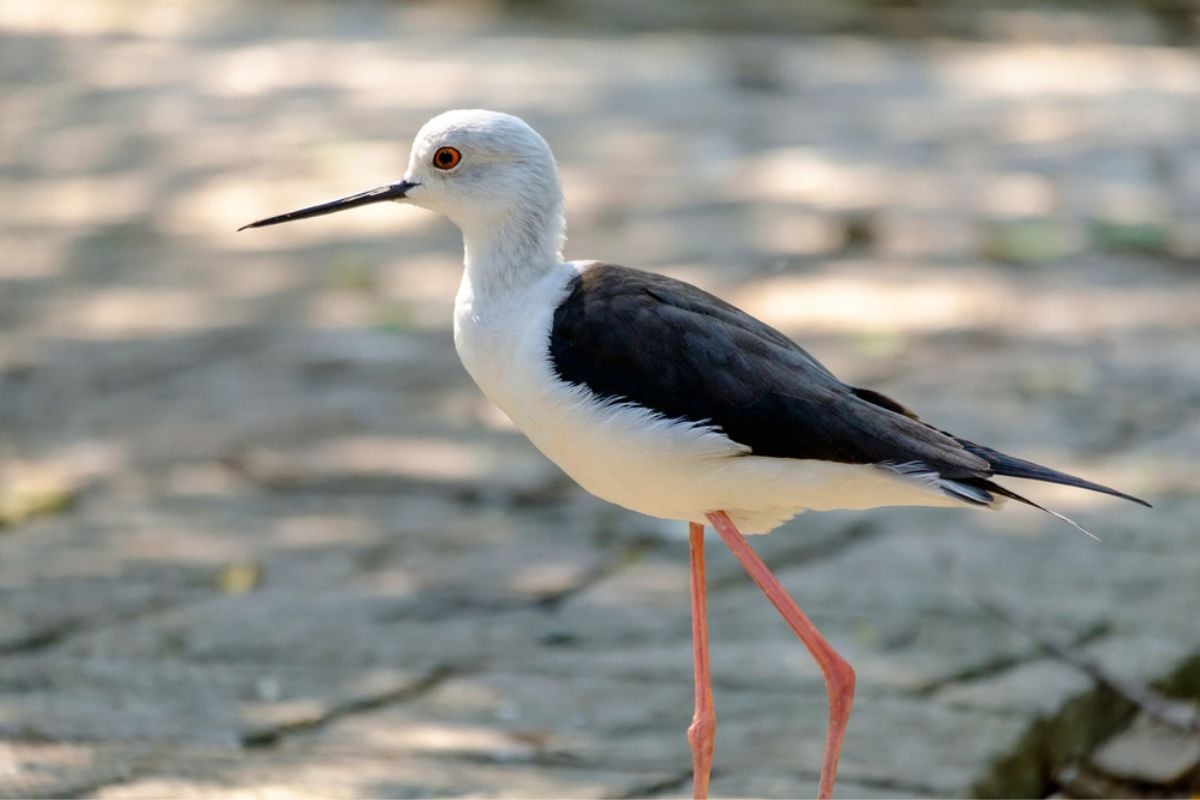 Avocets and stilts belong to the same Recurvirostridae family. They have some similar features to avocets. Stilts are a bird that is often mistaken for an avocet.

Their bill, while long, is straight, not curved like that of an avocet. Some species have colorful legs, another feature that distinguishes them, since avocets have blue-gray colored legs. 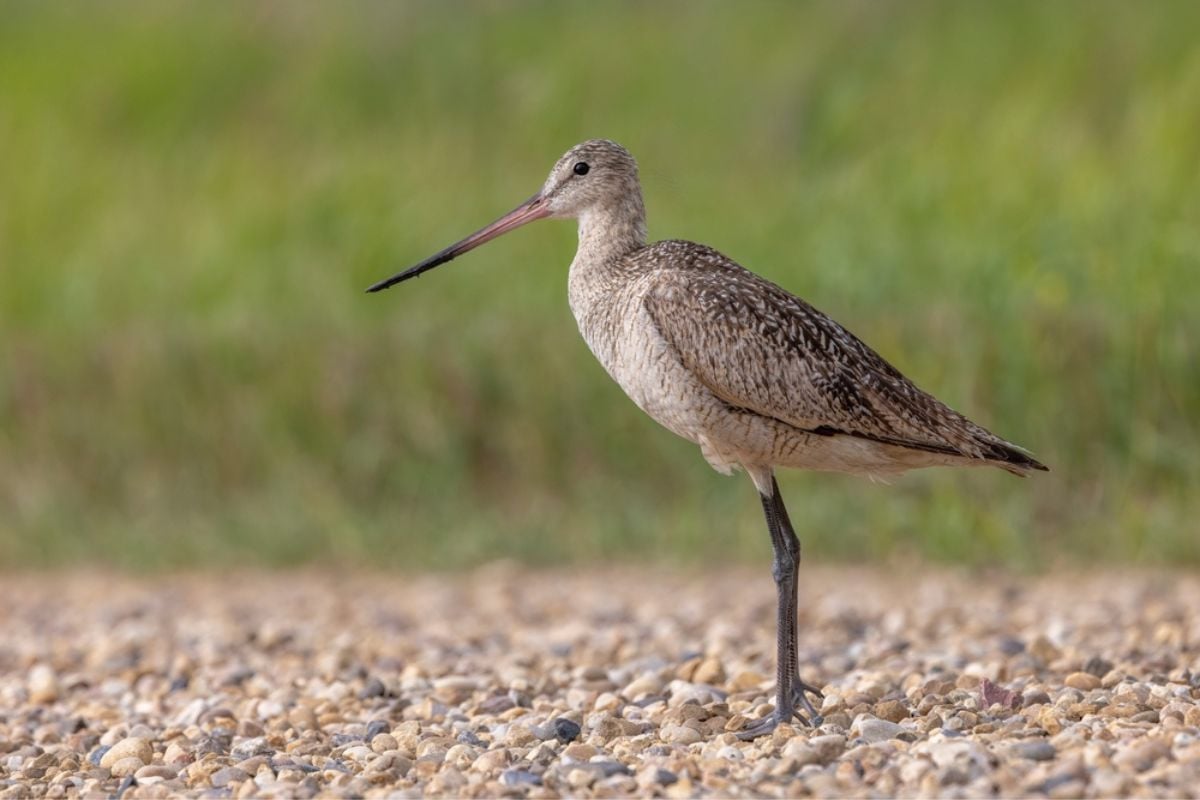 The marbled godwit has similar coloring to the American Avocet. Avocets are not as brown as the marbled godwits, which also have black on their bellies during the breeding season. Marbled godwits have a long bill similar to the bill of avocets.

It is slightly upturned, but not as much as that of the avocet. Avocets have a solid black bill, while marbled godwits have a bi-colored bill. 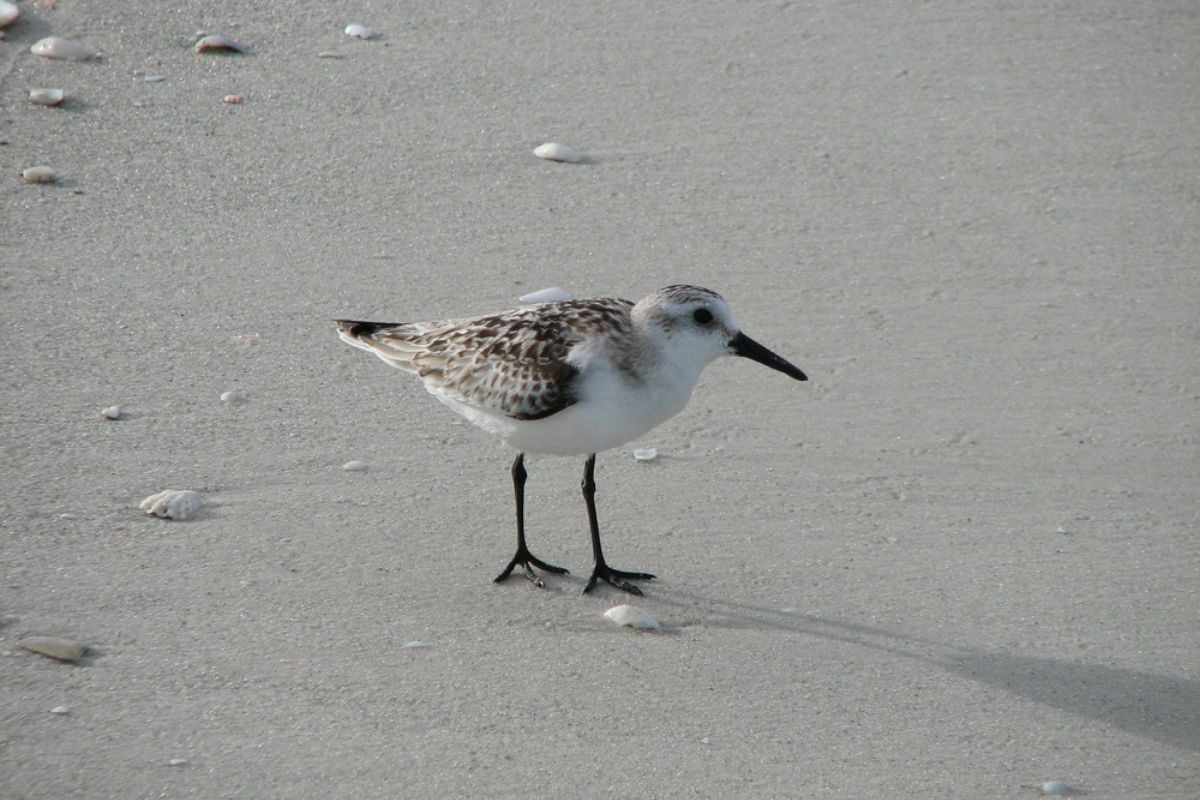 Look at plovers from a distance and you may think that you see an avocet. Plovers are beautiful birds with black and white feathers. They have distinct wing patterns when they fly, similar to avocets.

There are 65 species of plovers, compared to only four species of avocets. 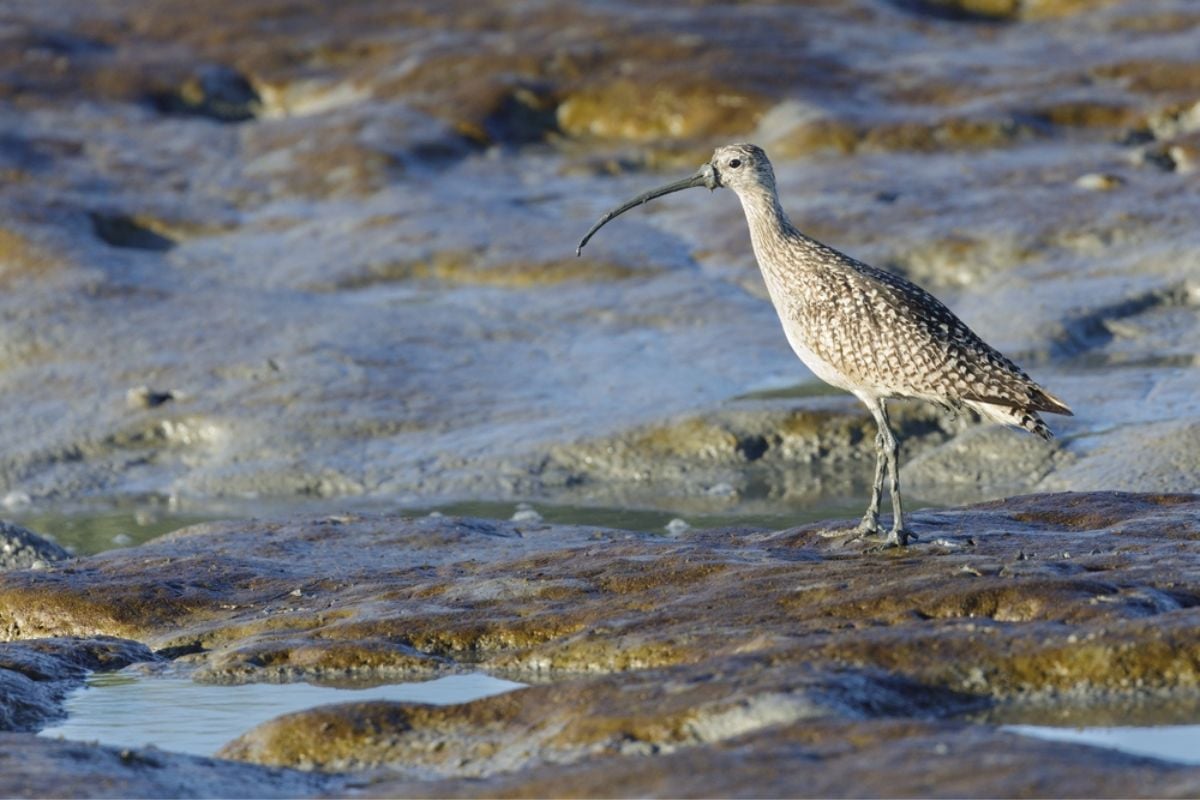 The long-billed curlew is the largest of the shorebirds that live in North America. It has the nickname of the sicklebird or the candle bird. The long bill of the bird means that it may be mistaken for an avocet.

The avocet prefers wading in shallow waters and finding its food in the water. Long-billed curlews breed in the grassy wetlands of the Great Basin or Great Plains. Avocets make their nests near the shorelines. 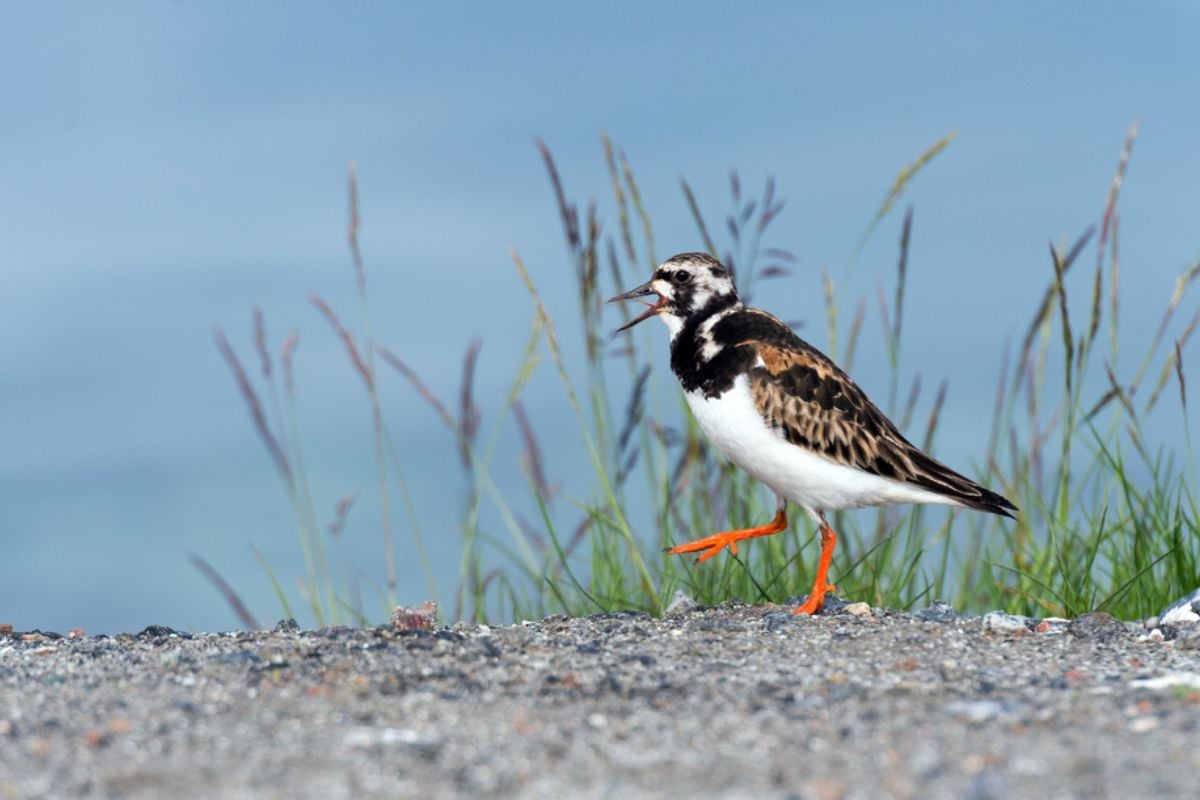 The plumage of the ruddy turnstone is black and white with ruddy, tortoise-shell-colored wings. It migrates to areas that are similar to the migration patterns of some avocets. Ruddy turnstones migrate to the coasts of North America, South America, Australia and Africa.

The bird forages for food along shorelines by upturning rocks or pebbles, if this is its only opportunistic way of finding food. It prefers spiders and insect larvae, crustaceans, berries, plants and eggs of some other birds for its ideal diet. 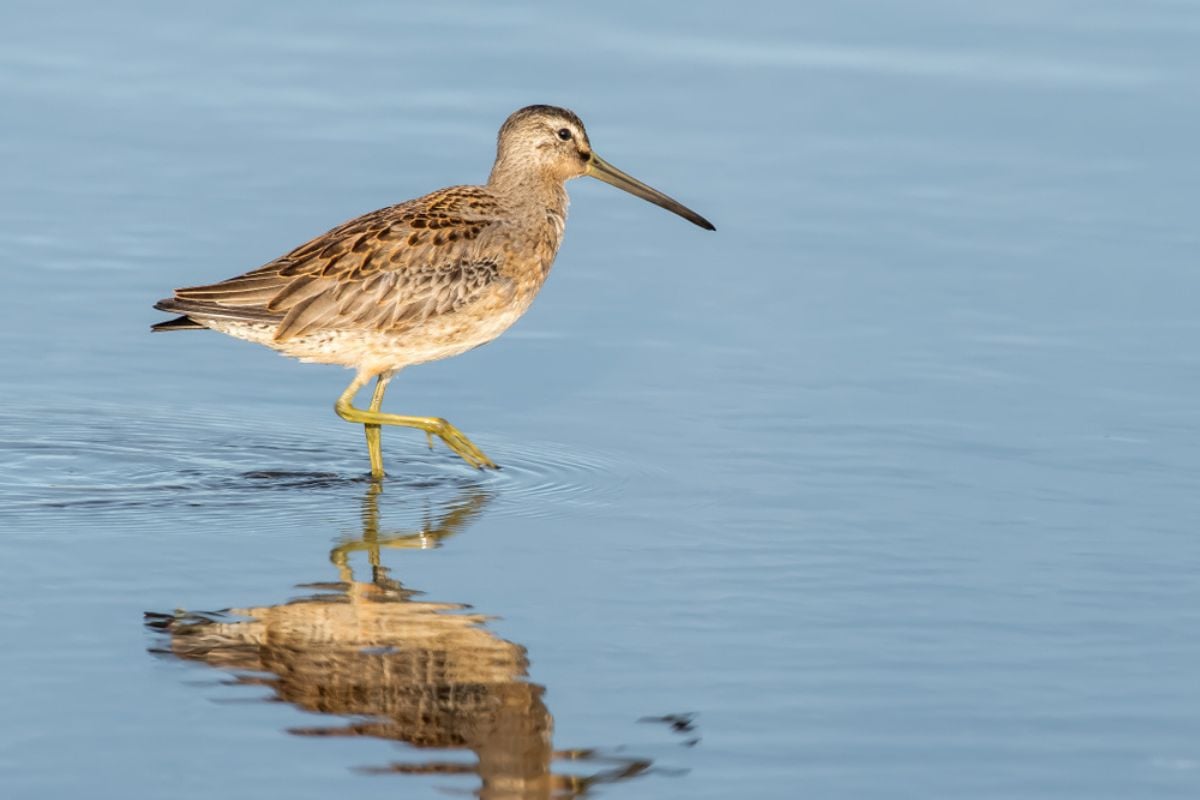 Long-billed dowitchers stick their long bills into the sand or mud for food, or wade into shallow waters to find food. Their diet consists of insect larvae, some plant matter and seeds. The diet during the winter months includes crustaceans.

The breeding grounds of long-billed dowitchers are different from those of avocets. They breed in northern or western Alaska when in North America. They prefer grassy wetlands or freshwater meadows for their breeding area.

The male long-billed dowitcher cares for the young when the eggs hatch. The female does not care for the newborn. The male and female avocets share parental responsibilities. 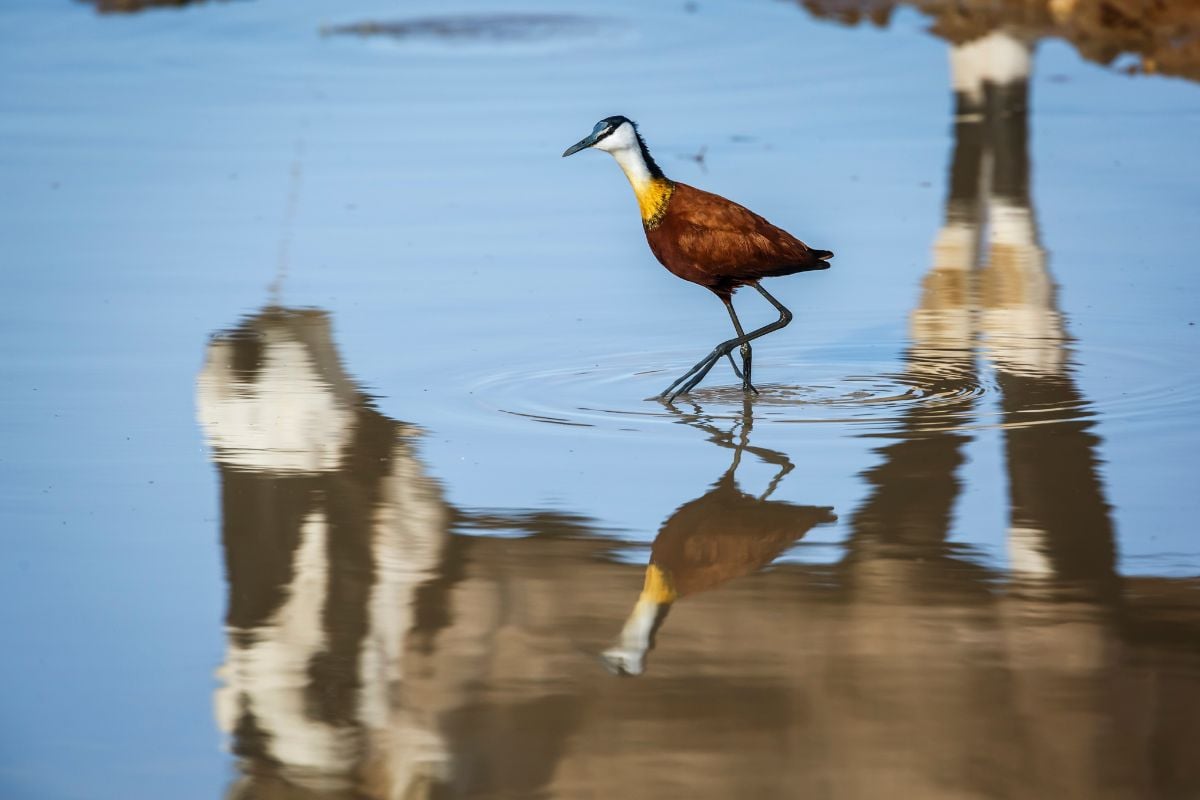 Jacanas are a shoreline bird, like the avocets. Sometimes considered more of a wading bird, they have some features that are similar to the avocet. The birds have similar long, thin legs.

One difference is the long talons on jacanas. This distinguishes the legs of jacanas from those of avocets. They sometimes wade across lily pads or other vegetation in search of food.

They do not sink because of the long, spindly toes. Bird Notes explains that jacanas are known as “Jesus Birds” in Jamaica because they look like they are walking on water. Jacanas are found around the world in tropical areas, and in sub-Saharan Africa.

The various species of jacanas have distinct coloring and markings. The African Jacana is chestnut-colored or cinnamon-colored like the wattled jacana or the northern jacana. It has a head and neck that are white in the front and black along the back.

The northern jacana and wattled jacana have a dark brown or black head and neck.

8. The Comb-crested Jacana has more coloring than avocets or some other jacanas. 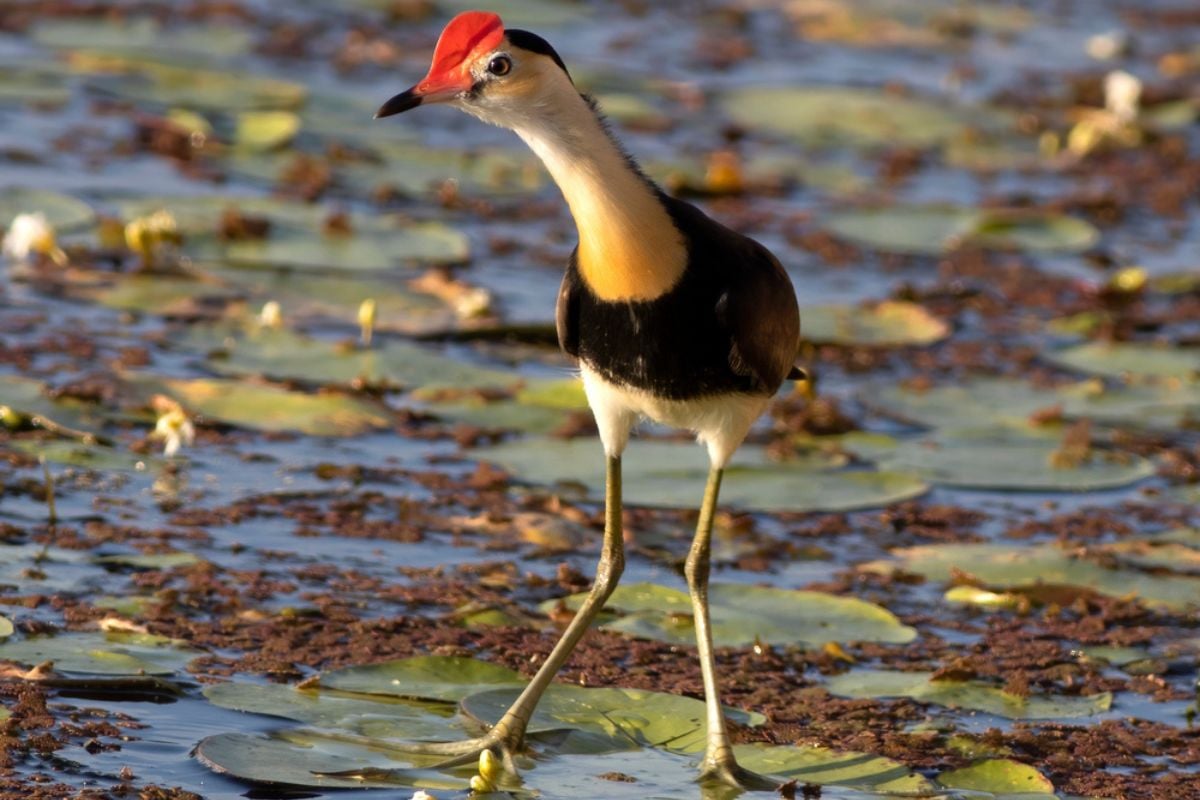 Jacanas are weak fliers. Avocets have better flying skills than those of jacanas. They prefer to feed and nest along shorelines, while jacanas like living out on the water.

They often build their nests, made of leaves and stems, on a floating plant. Males spend more time building their nests than the female jacana. Males take on much of the parenting responsibility for chicks during incubation and after birth.

Females breed with several males, compared to the single pair of avocets.

What are some facts about avocets?

A fun fact about the red-necked avocet is that it appeared on the 13-cent postage stamp in 1966. Non-breeding American Avocets have a gray and white head and neck, rather than the reddish-colored head and neck of breeding adults. Each of the four species of avocets has a unique call that is different than other species of avocets.

What are the predators of avocets?