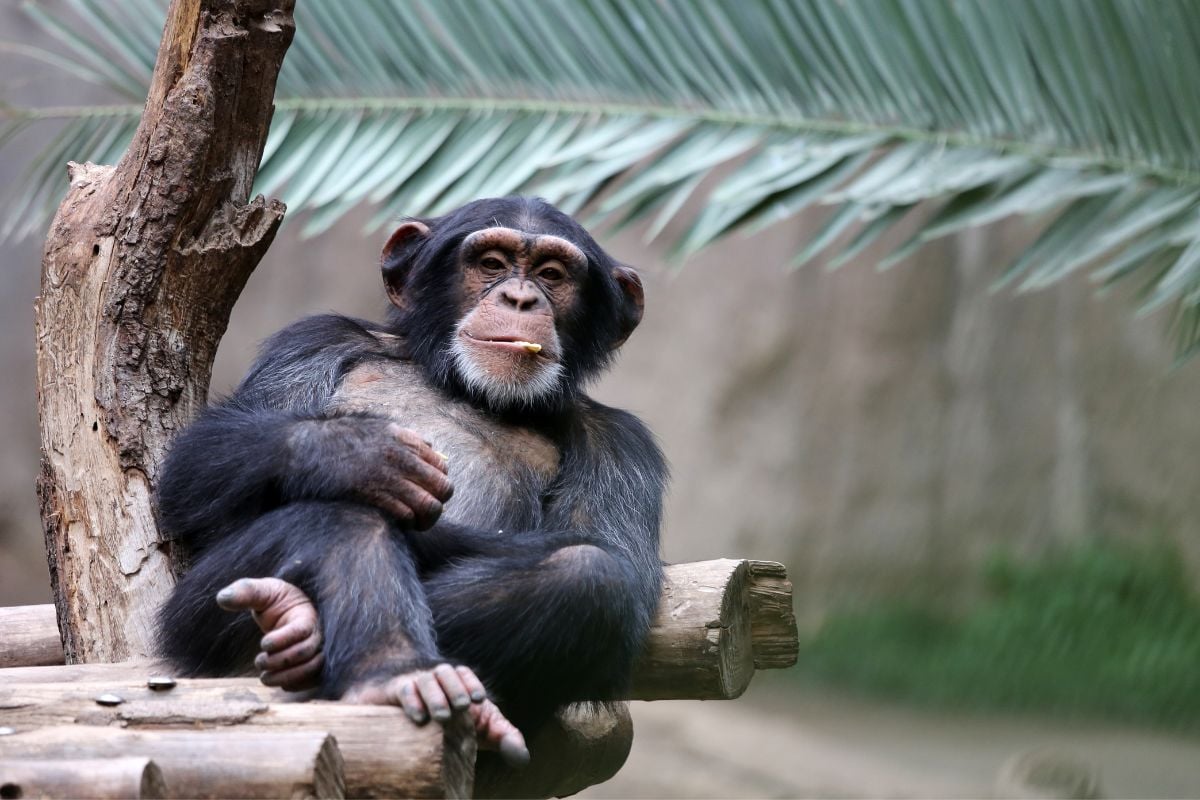 There are many animals that are similar to chimpanzees in nature. These animals are unique in their own way, yet they complement chimpanzees in their behavior and lifestyle. Chimpanzees live an average of 15 to 30 years.

However, in captivity, they can live up to 40 years. By the age of 10 years old, chimpanzees live with their moms and begin their own families around the ages of 13-15. Chimpanzees lost their homes due to deforestation, wars, and habitat destruction.

Chimpanzees are also killed for their meat, and their babies are sold to exotic pet industries. The oldest chimpanzee was 64 years old when it died. Another critical factor is that chimpanzees and humans share a DNA structure that is 98 percent compatible.

The animals listed below share differences and similarities. Some are free-spirited, some enjoy living in family settings, some enjoy being in isolation, and yet others are diversified. The most shocking animal in this group is perhaps the Bonobo.

Its social interactions and sexual appetites are in line with some humans. The fact that animals live longer in captivity is due to several factors. First, they get the proper diet that helps them develop properly.

Secondly, they get the medical attention they do not get by living on their own, and thirdly, they are safe from poaching, predators, and wild fires, and other elements that threaten their existence. These amazing facts will help you to understand both the differences and similarities these animals have with the chimpanzees. 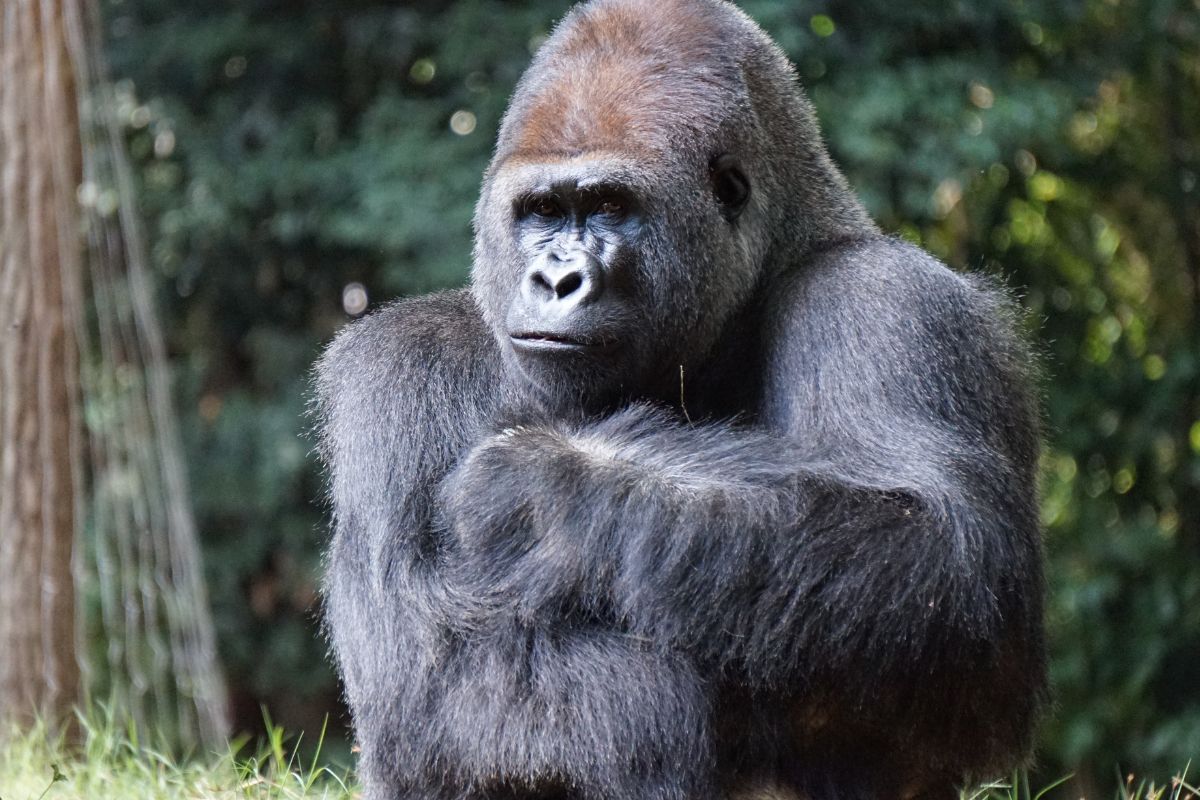 Where do Gorillas Live?

Gorillas live in the lowlands in groups of five to 10. In some instances, they live in groups of 50, with a dominant male leading the group. Everyone in the group is submissive to the leader of the group, and all follow his lead without confrontation.

Gorillas enjoy a Veterinarian diet of fruits, bamboo shoots, and plant stems. However, gorillas living in the lowlands have an appetite for ants, termites, and termite larvae.

Gorillas can live up to 35 – 40 years in the wild, on their own, and up to 63 years in captivity. The chimpanzee’s and gorillas’ locations and habitations are similar in this regard to this. The differences in both species are in their lifespan, both in captivity and in the wild.

For this reason, they do share some similarities. Gorillas are taller than chimpanzees and they weigh more. 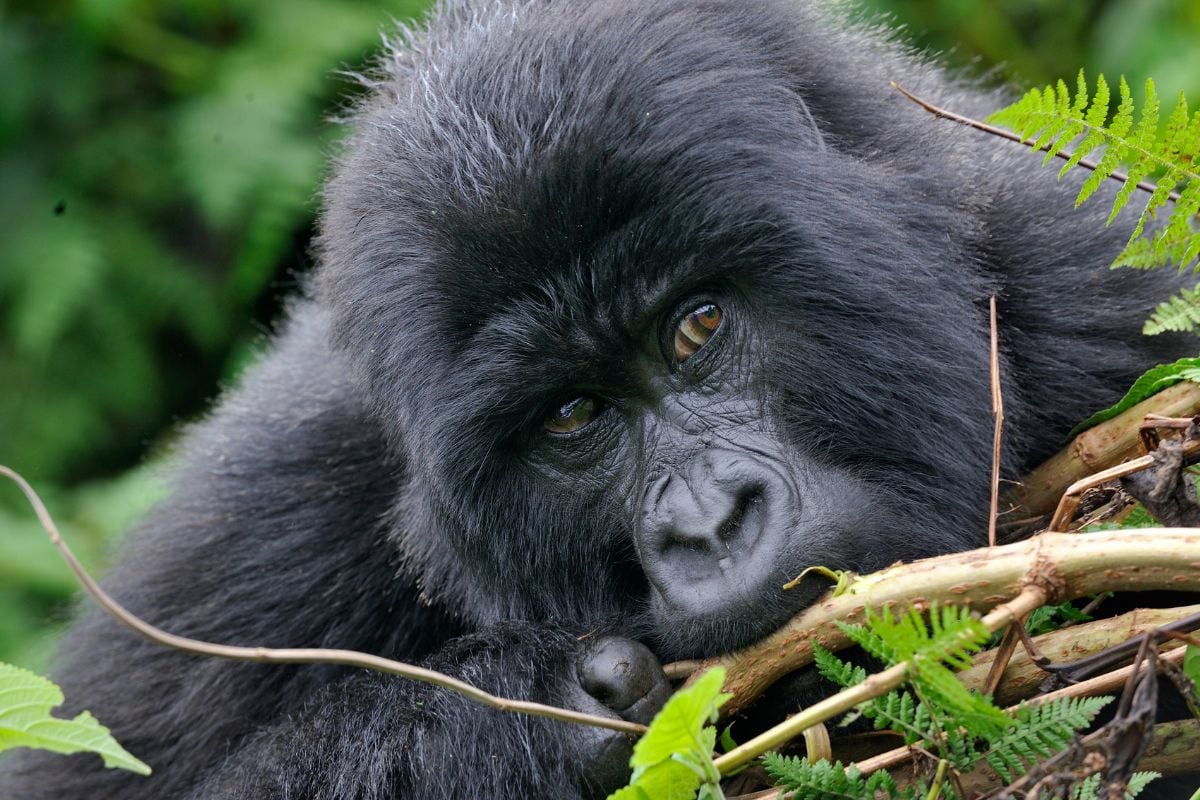 Their fur is thicker and fuller than their cousins, as it helps them to stay warm during freezing weather. Around 1,063 mountain gorillas exist. They are a subspecies of the eastern gorilla.

They have 16 different types of vocal calls, which consist of roars and hoots.

They live up to 13,000 feet in the highest mountains. Humans have dominated their habitat and pushed them farther into the mountains, oftentimes putting them in danger. They are on the endangered species list.

They can weigh up to 440 lbs., and stand up to 5 1/2 feet. They like living around settlements and agricultural surroundings.

Although they love vegetation, they also enjoy the delicacy of ants, snails, tree barks, roots, and decaying wood. 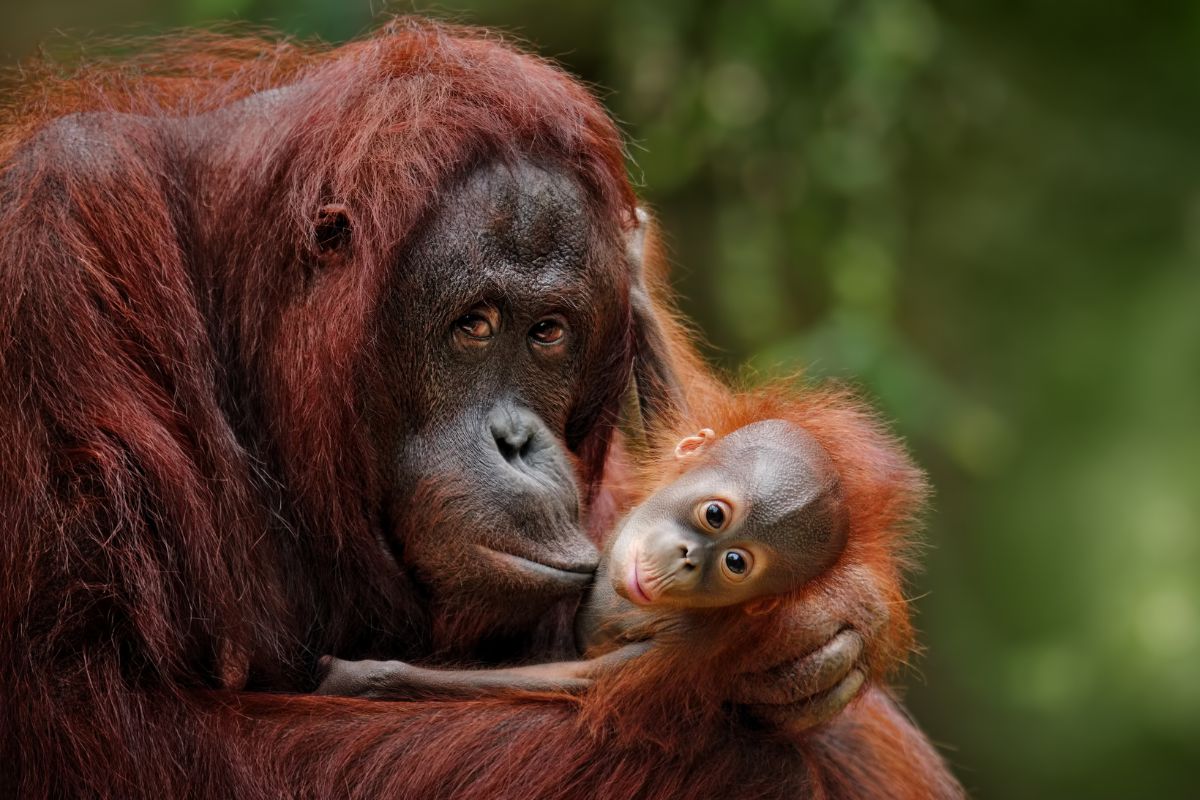 Organgutans are called great apes. Their scientific name is Pongo. They share 97 percent of their DNA with us, humans.

The orangutan’s arms are longer than its body and measure over two meters. Using their fists and the palms of their hands, they can walk on all fours. They are on the endangered species list.

Without intervention,  they would probably be distinct within the next 10 years.

Their home is in the rainforest, which is soon disappearing due to human deforestation, fires, and drought. However, they spend most of their time sleeping in trees.

They eat a mixture of fruits and leaves from the trees in the rainforest. They also eat tree bark, insects, and a little meat from time to time. 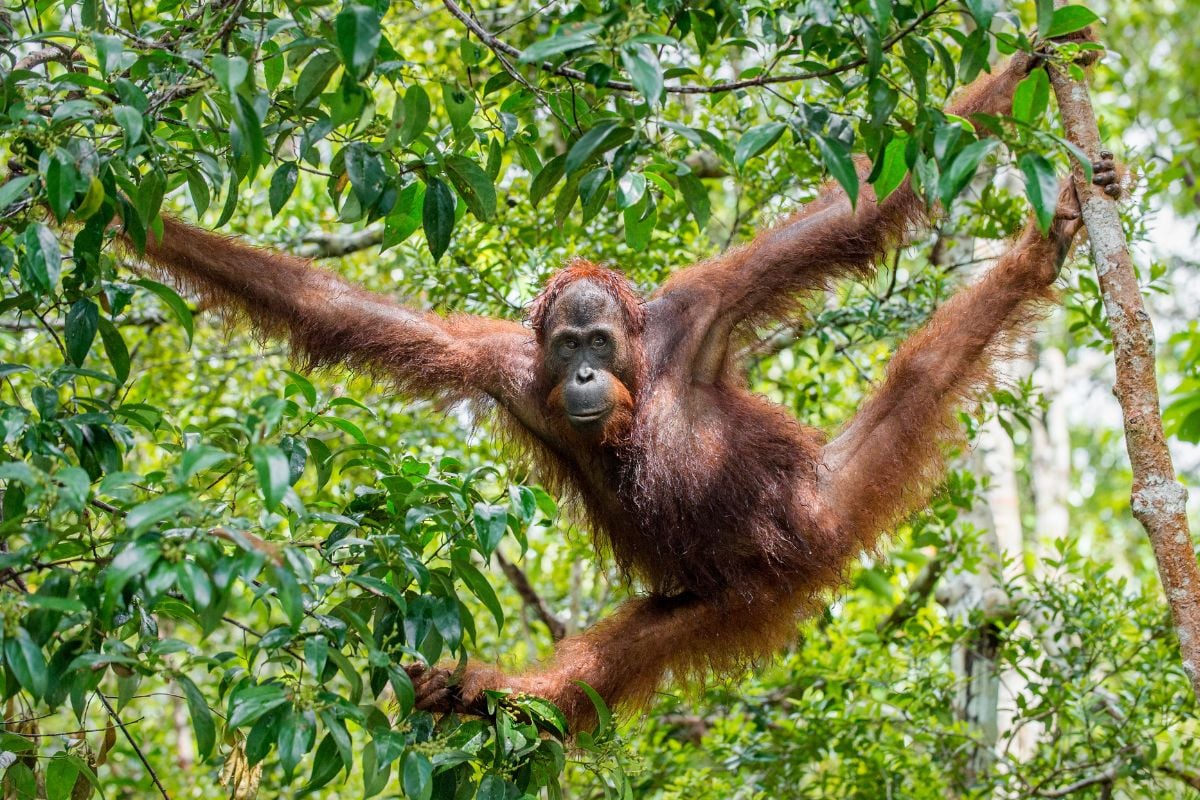 Apes do not have tails, and they are smaller than monkeys and chimpanzees. Apes have large brains, which allow them to learn languages and use tools, and they are good at math. Just like humans, they make their beds.

However, you will never find them sleeping in the same place twice. They build their nest bed with strong twigs and branches, strong enough to support their weight.

They are a rare species, only found in the Dominican Republic of Congo.

They are omnivores. This means that their diet consists of shoots, stalks, leaves, fruit mainly, plants, roots, and leaves. 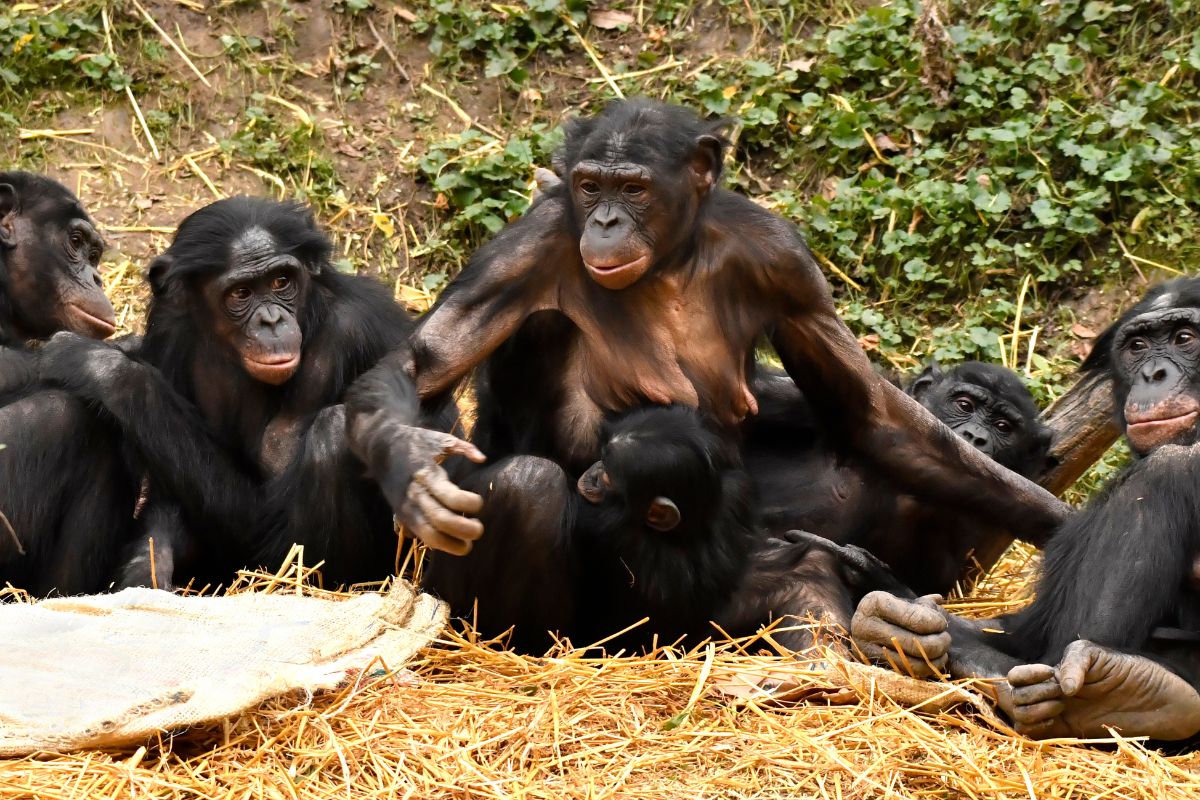 They are also known as pygmy chimpanzees, and they have two big opposite toes. They have 24 chromosome pairs, their height is 28 to 35 inches, and their weight is 68 to 86 pounds.

Where Does it Live?

They live in the Dominican Republic of Congo, Central Africa, and the Congo Basin. They also live in swamp forest areas, but they are not great swimmers.

What Does it Eat? 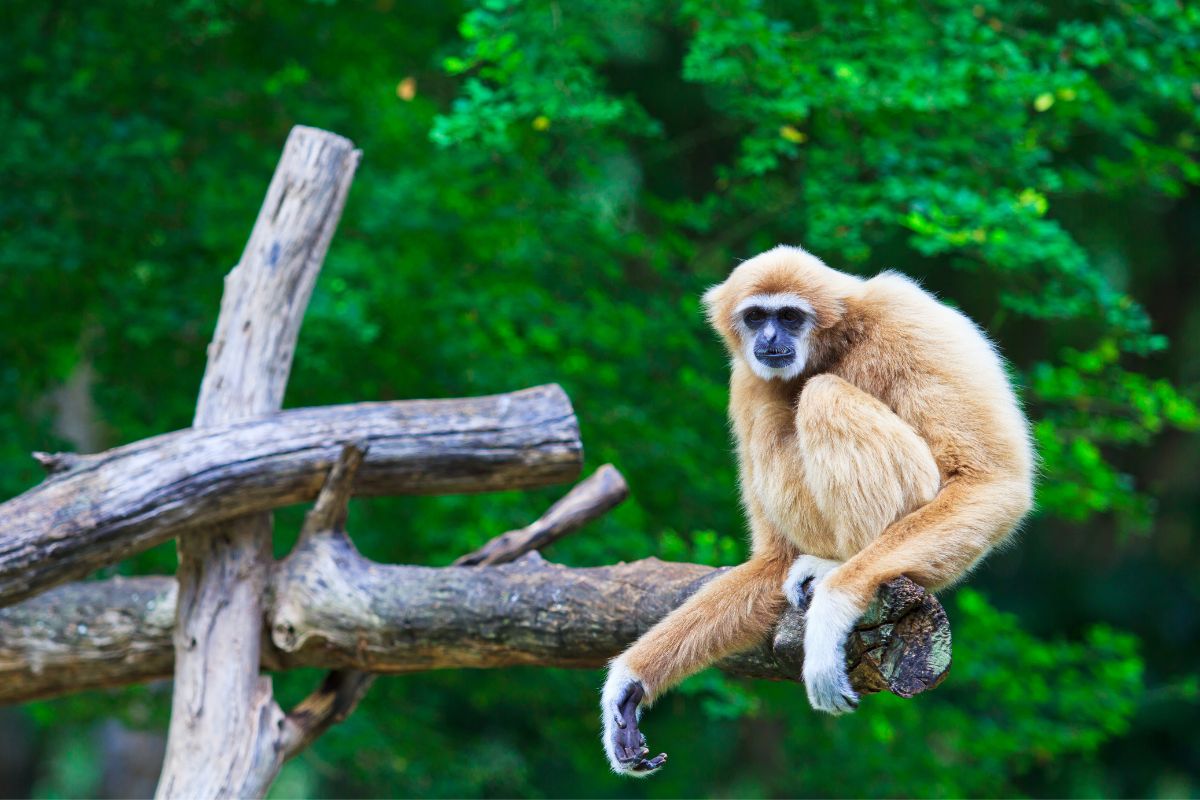 They are diurnal apes that are small in size. They weigh from 4.4 to 7.4 kg and stand 42 to 59 cm, and their arms are much longer than their legs. They are great balancers.

If you see them holding their hands above their heads, this is how they balance themselves by walking the tight rope on trees. They are by far the fastest, non-flying arboreal of their species. They typically space their pregnancies 2 to 3 years apart.

While they have single births, twins are a possibility.

They live in China, Indonesia, India, Cambodia, Bangladesh, Vietnam, Thailand, Malaysia, and Myanmar. They are family oriented and love living in family settings. However, they are very territorial.

They live and travel in trees and decomposed forest

They eat their share of leaves and flowers. They are considered frugivorous. 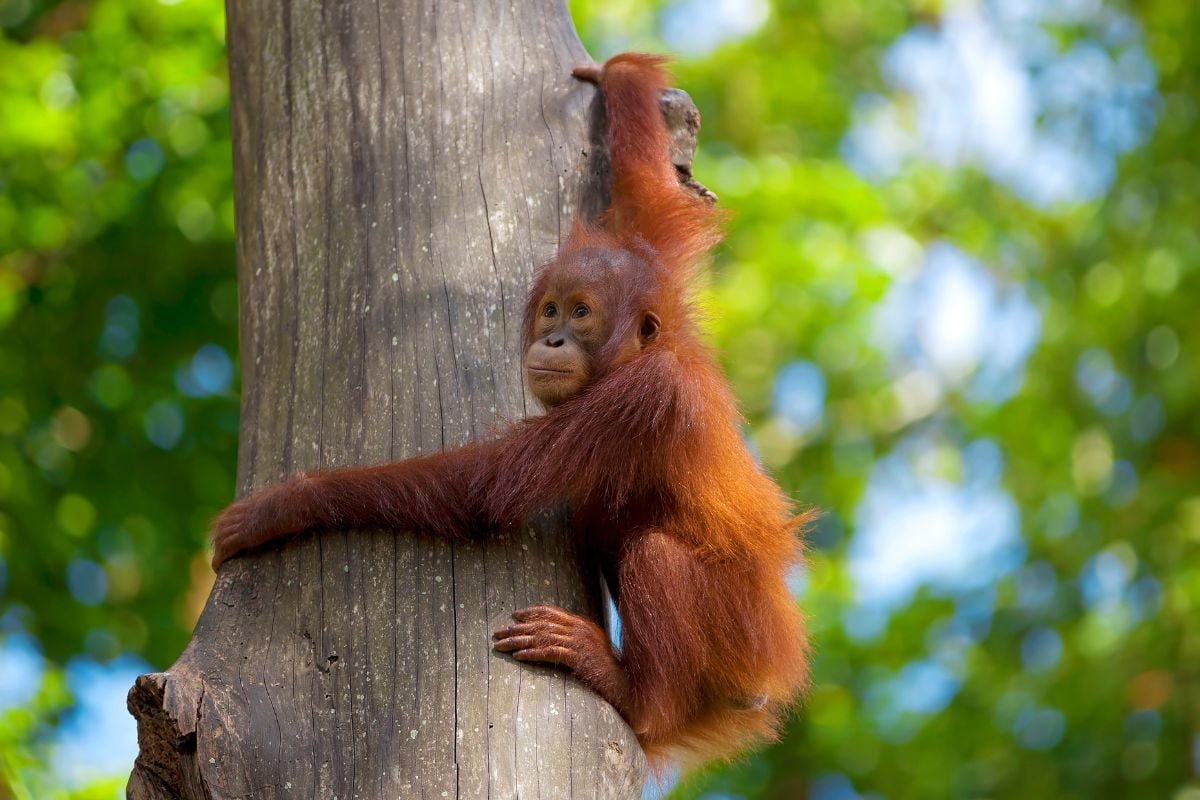 The Bornean orangutan’s scientific name is Pongo pygmaeus. It is the only ape native to Asia. It is considered an endangered species.

They sleep 40 to 50 feet off the earth in a nest made from vegetation debris. They cannot swim, which limits their boundaries. They enjoy living in peat swamps among decomposing trees and leaves, and in lowland areas filled with swamps.

They are located on the Island of Borneo. They spend their lives off the ground as much as possible. They sleep 40 to 50 feet off the earth in a nest made from vegetation debris.

They cannot swim, which limits their boundaries.

They rarely come down for food, but they make habitat in groups of six or more. Their physical activity is in synch with the mast fruiting season, as this is when they are most active and can be seen walking quadrupedally or bipedally. 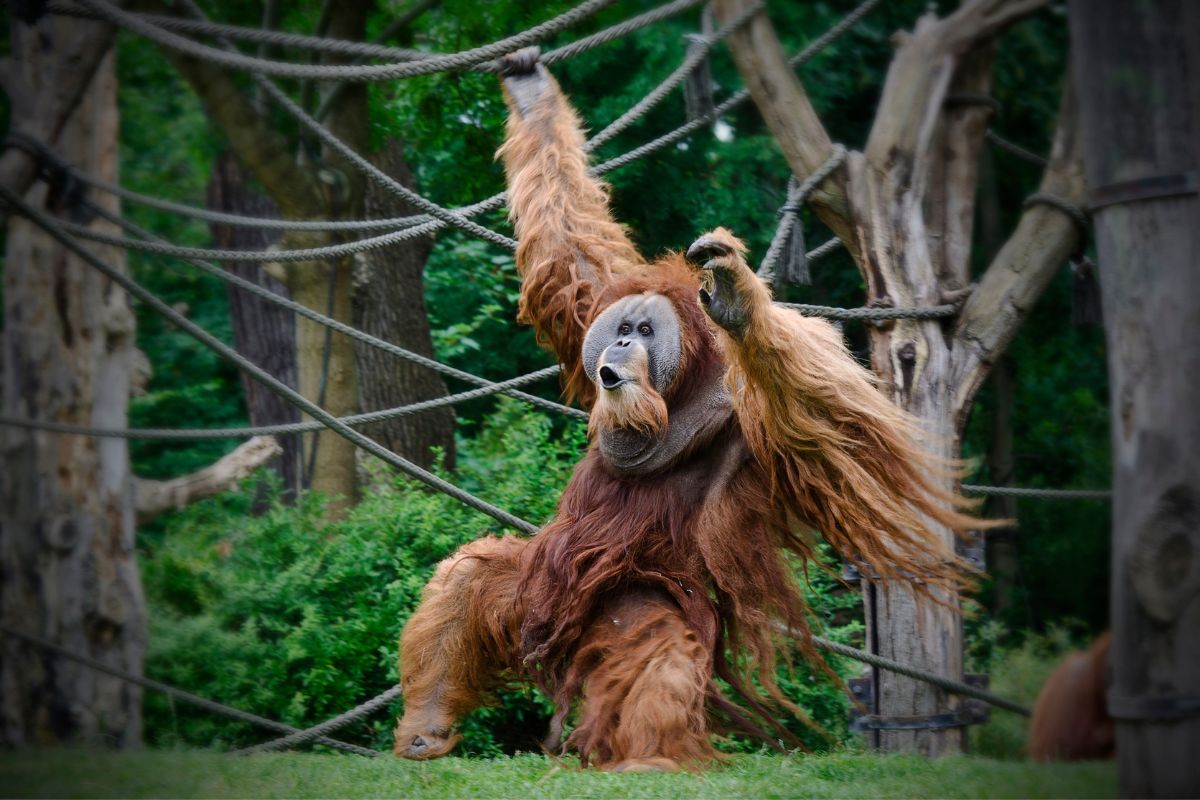 The Sumatran orangutan, scientific name Pongo abelii, is a critically endangered species of orangutan. It is one of three of its kind. The female stands 3 to 4.3 feet, and the male stands 4.5 to 6 feet.

Females do not go through menopause, and can conceive and give birth in their early 50s.

The Sumatra diet consists of 60 percent of fruit, young tender leaves, tree shoots and barks, insects, mangoes, eggs, small vertebrates, and insects. Their need for water is not a necessity, as they get water from fruit and from holes in trees.

Females in the wild can live from 44 to 53 years and the males from 47 to 58 years. Even in captivity, their  lifespan is the same. 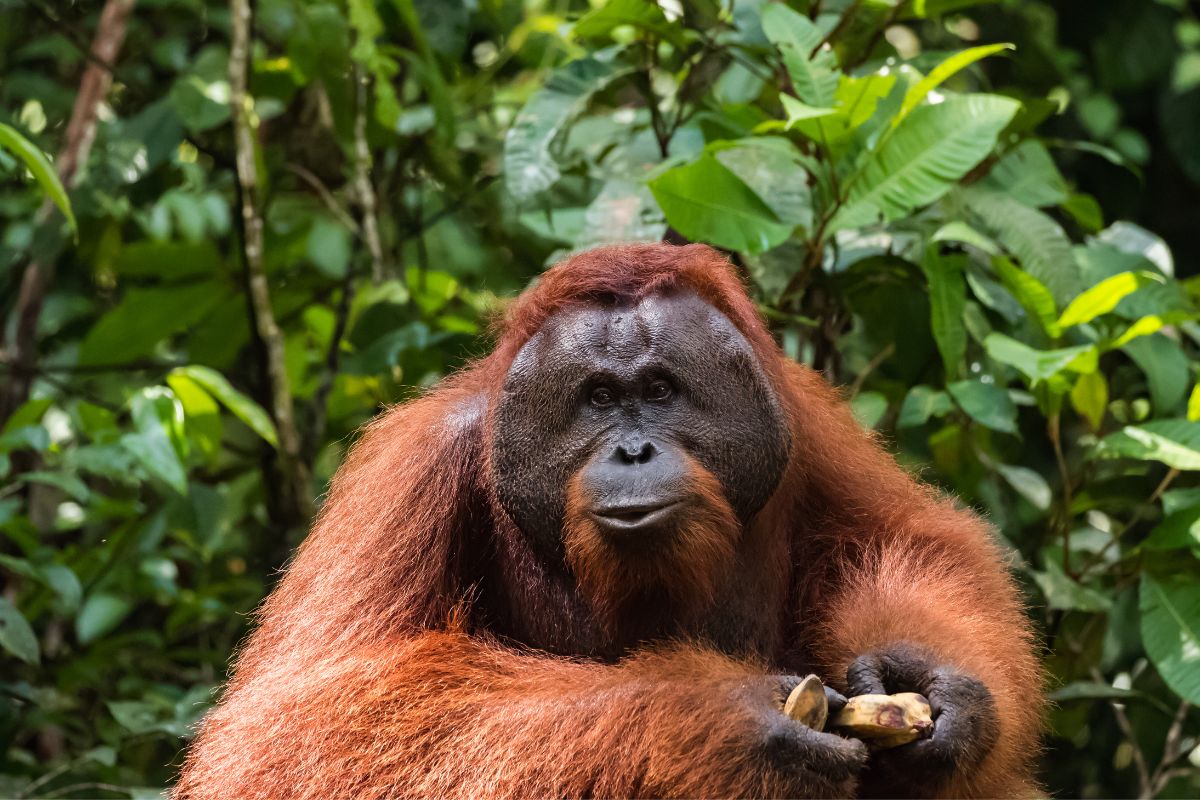 The Tapanuli orangutan was the newest discovered orangutan found in the forests of Sumatra and Batang Toru in 1997. It is only found in 1100 forests located in both the south and north districts of Tapanuli and in the North Sumatra province. The species is listed as critically endangered on the Red List of IUCN.

There are fewer than 800 Tapanuli orangutans in existence today. This is mainly due to humans deforesting their habitat to create new plants or projects. They carefully construct their nest for day or night use exclusively.

They are located on the Island of Sumatra in Indonesia. They are found in the districts of north and south Tapanuli, located on the South Lake of Toba. They live in tropical rainforests, on mountains and hills, and on tall terrain.

Their favorite places to habitat are undisturbed forests, and areas where crops are grown. They are solidarity mammals. They enjoy their quiet time away from others.

Their diet is similar to the diets of their closest relatives. They love to eat plant and tree saplings, leaves, insects, tree bark, plants, honey, eggs, and buds. However, fruit makes up the biggest part of their diet. 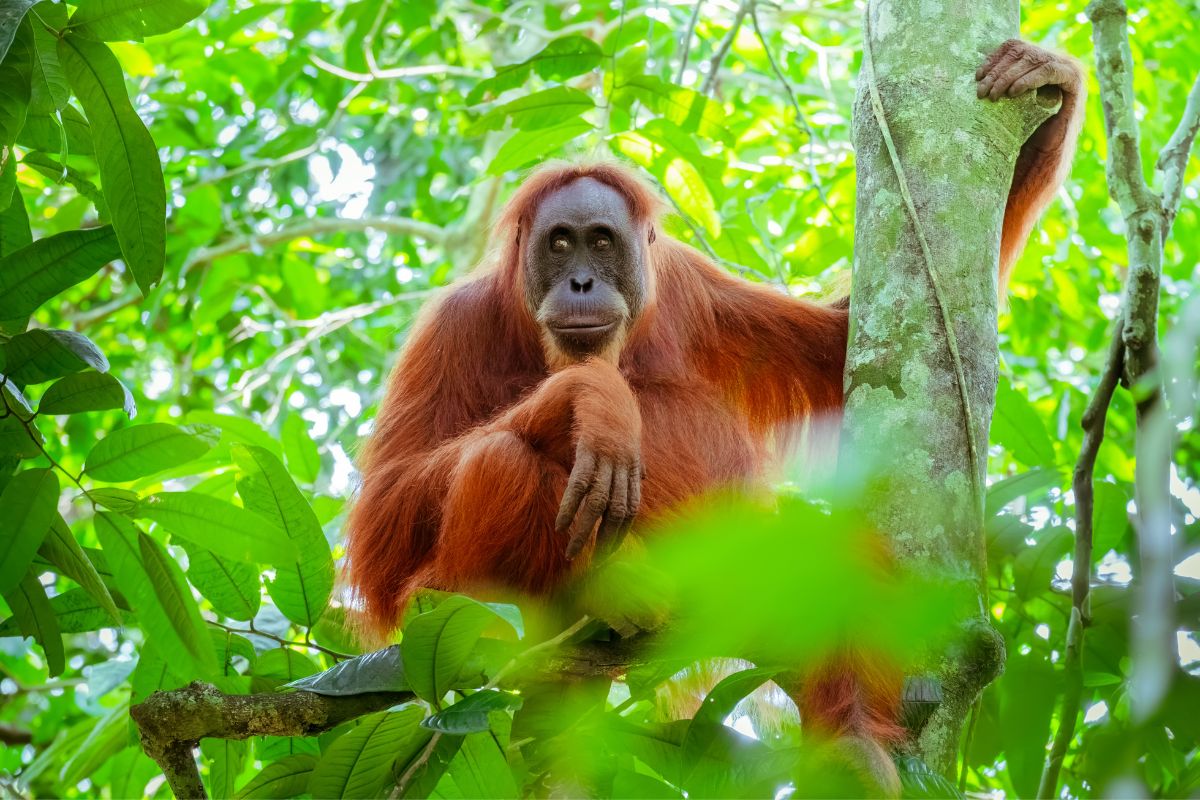 They live in Central Africa where they enjoy the swamplands of the rainforest. They love the dense and secluded area away from the crowd. They make their homes about 1600 feet above sea level.

For this reason, they are rarely seen by humans, which is good for them, no doubt. They live in groups called troops, and these troops contain four to 10 members. They are not great distance travelers.

Their travel distance is less than one mile per day.

Their omnivore diet allows them to enjoy both plant-based foods and meat. Their diet consists of shoots, bark, insects, leaves, ants, termites,flowers, and more than 200 species of plants. Their diet is similar to other primates of their type including the chimpanzee.

The Western gorilla can live 30 to 40 years in the wild, and up to 50 years in captivity. Just like their close relatives, their existence and lifespan is threatened by humans invading their habitat, poaching, and the destruction of their forests.